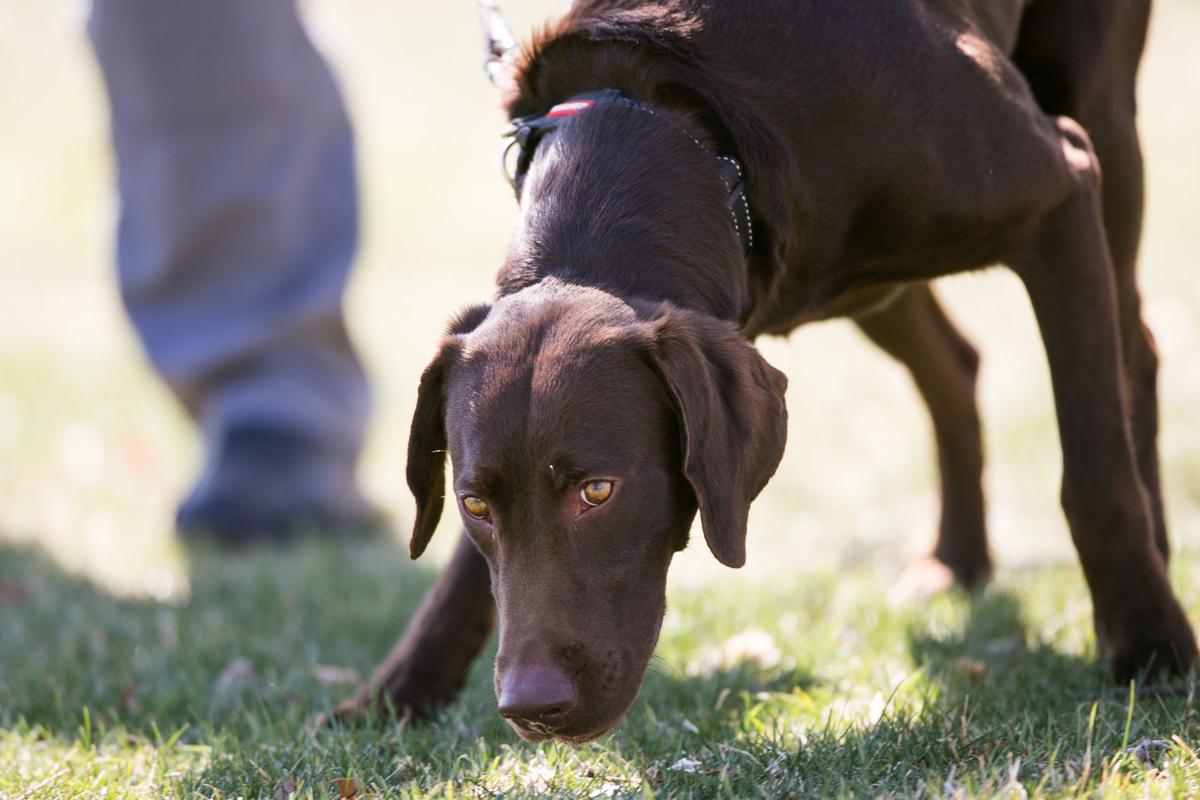 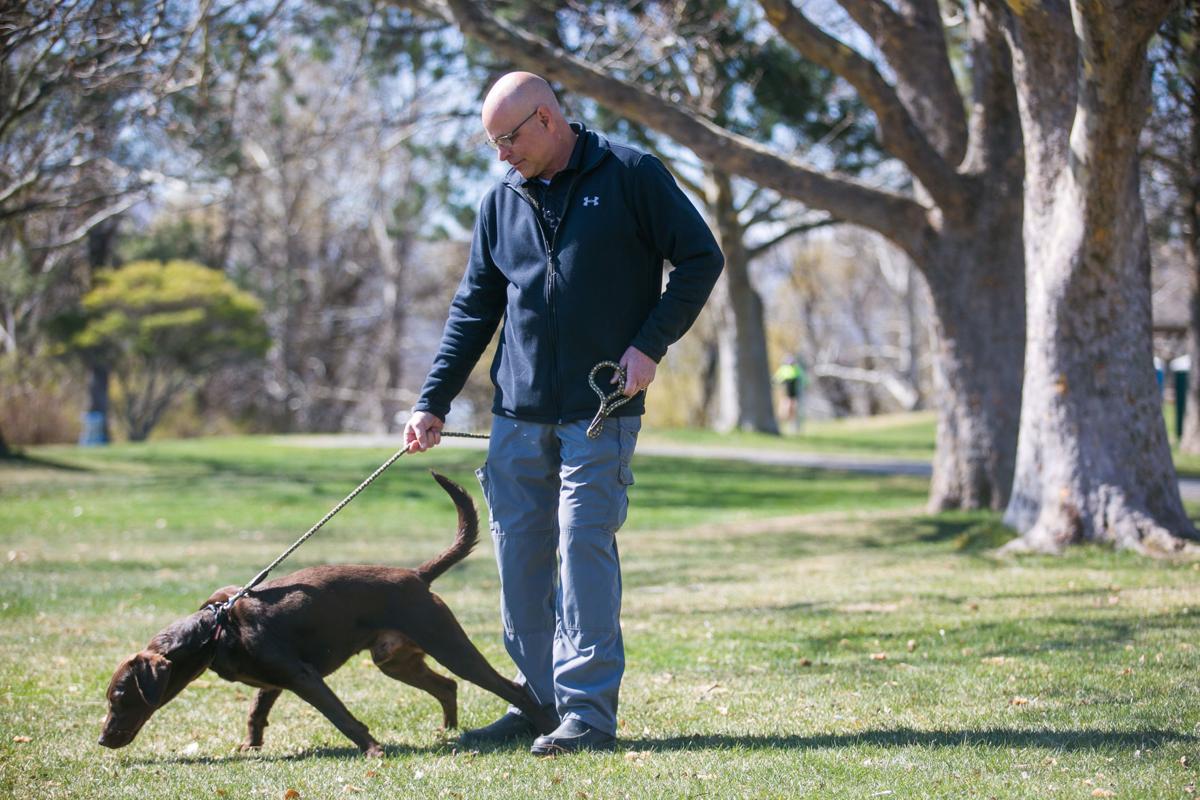 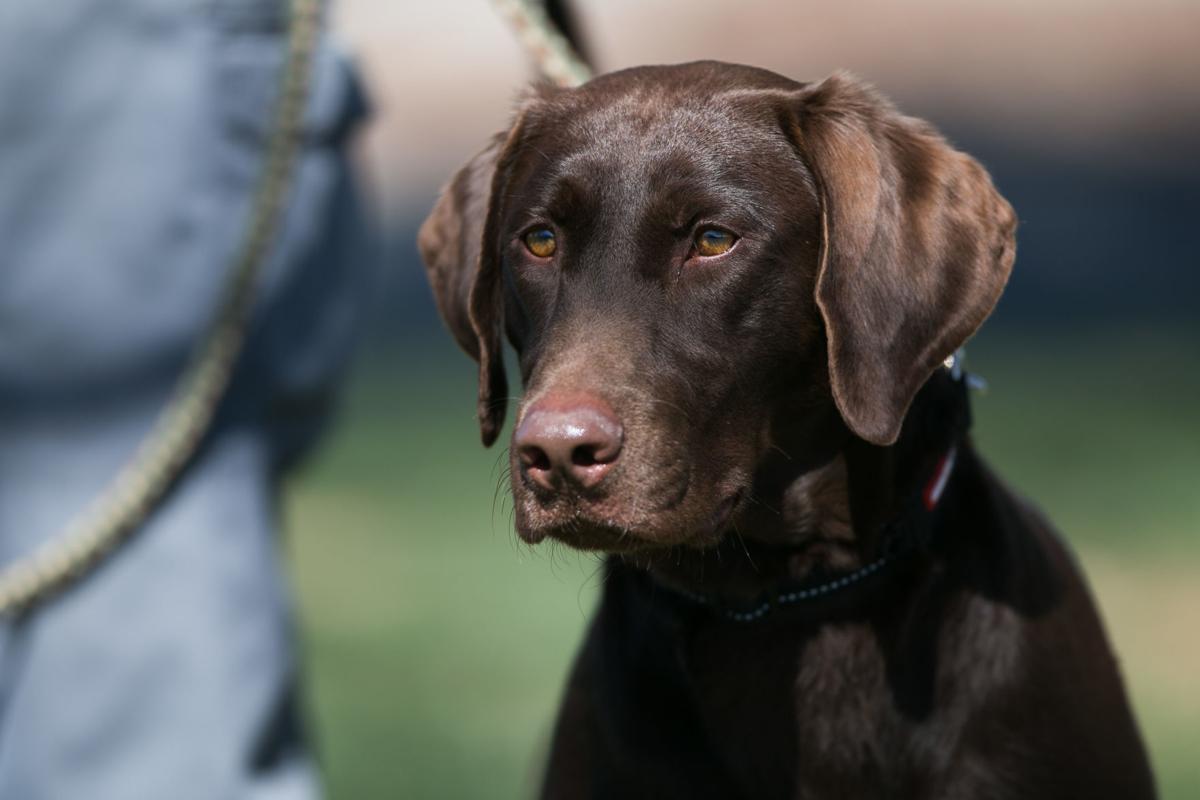 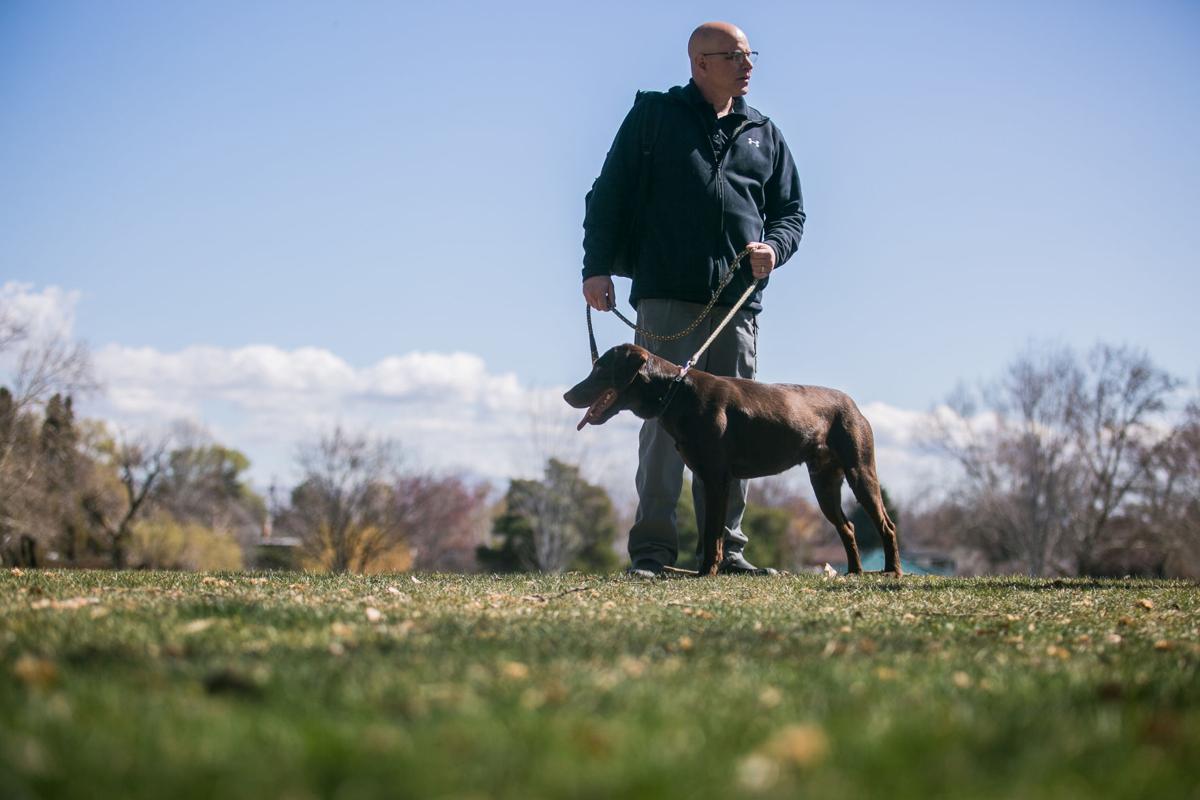 Jim Curtice has known many dogs in his life, but the latest addition to his household is likely the biggest go-getter of them all.

During a recent visit to Randall Park, a sleek chocolate lab named Justice strained against the leash, nearly pulling Curtice with him more than once. Several dogs passed on a nearby blacktop path, but Justice ignored them. His eyes stayed on the wide grassy expanse before him. He really wanted to get out there.

Justice wasn’t at the park for fun; he wanted to work. He has a job, and that job is to follow his nose and find what others cannot: human teeth, blood, hair, bones and tissue.

Chosen for his role because of his drive, Justice is the Yakima County coroner’s first human remains detection dog, also known as a cadaver dog. Justice, who is 18 months old, started learning in early September to detect the smells associated with remains and alert searchers to their location.

“They really like labs because of their disposition. They’re looking for drive more than anything,” Curtice said. “The trainers watch them and make that determination.”

Justice will help the coroner’s office get answers by finding forensic evidence and remains of people who have gone missing. His intense focus and high energy will be key in back-country searches and remote areas where evidence can be sparse and remains scattered over a large area.

He is so specifically trained that a bag of bones found in the Lower Valley didn’t get his attention. “He didn’t hit on them; they were non-human bones,” Curtice said. “It might have been a deer.”

The pair arrived in Yakima on March 28 after two weeks of training together at Highland Canine Training, a professional dog training company in Harmony, N.C. As with almost every aspect of life amid the global novel coronavirus pandemic, their cross-country trip didn’t happen as originally planned.

“I got there on March 17 and that was when this whole thing started,” Curtice said.

Their return fight was canceled twice. “He was going to fly Delta, then Delta said no,” Curtice said. “Then American, and they canceled the night before.”

A third try, with Alaska Airlines, succeeded — with a catch. Curtice had to rent a car for a five-hour drive to Atlanta and an early flight March 28. That worked out well and they got to Yakima just a day later than originally planned.

“We were on a 737 and there were about 22 people on the plane. We had the whole row,” he said of Justice, who lives with Curtice’s family and three Great Pyrenees, two Shih Tzus and a couple of cats.

Curtice started looking for Justice last May, after Legends Casino Hotel awarded his office $14,000 — the largest single grant issued in its Yakama Cares program in 2019 — to buy and train a cadaver dog. Curtice began researching options and got three bids.

Justice was $11,535. That also included Curtice’s room and board while he was at Highland Canine for two weeks of training.

“They’re trying to keep it affordable. ... The next closest bid was $18,500. That’s the going rate,” Curtice said. “(Highland Canine) found him in late August and started imprinting in early September.”

In the two weeks he was in North Carolina, Justice was the only cadaver dog in training at Highland Canine. There were several drug dogs and a bedbug dog, which would be hired by hotels to certify them as bedbug-free, Curtice said.

Cadaver dogs’ sense of smell is so acute that they find bones buried for decades, even centuries. An archaeologist at the University of Zadar in Croatia employed a cadaver dog to find gravesites dating to around 700 B.C., an effort detailed in an article in the Journal of Archeological Method and Theory.

“Their sense of smell is just amazing,” Curtice said. “One day we went to a junkyard. He hit on (a car) that still had human tissue. It had been out since December.”

“Some of the scent was actual teeth. He found teeth in half an acre,” he said. Justice can also find human remains entombed in structures and hidden in the rubble of burned buildings.

Justice indicates a find by scratching the ground, with a tennis ball the reward for successful detection. He usually won’t go out of Curtice’s sight, but it can happen in rough country and dense woods. Curtice calls him back with a loud “Come!”

“I tell him to search and then I show him the tennis ball, and he knows it’s game on,” Curtice said. “He’ll go back and forth and we’ll just grid an area.”

“He doesn’t get to play with them unless he actively detects. Then we play for a few minutes,” he said. “He just loves it.”

Since assuming his role as coroner more than a year ago, Curtice has pledged to help find people who have gone missing in Yakima County. Dozens of people have disappeared in its cities and remote reaches, among them Cody Turner, who was last seen in late July 2015. His mother, Michelle Joe, is hopeful Justice will make a difference and help bring her son, and others, home to their families.

“I am super excited that Yakima County now has its very own cadaver dog,” said Joe, an administrator for the Yakima Scan Missing Persons page on Facebook. “I am looking forward to seeing Justice at work and am hoping that he is able to locate some of our many missing persons.”

Justice will recertify once a year. He trains for about 20 minutes every day, alternating between detection and obedience training, with cut-up hot dogs the reward for following commands.

His obedience still needs some polishing, but Curtice is hopeful Justice’s sensory superpowers will bring answers that have been out of reach for years.

“He does all the work. I just follow him around,” he said.

If you have good reason to believe human remains may be at a certain location and need to be found, Yakima County Coroner Jim Curtice will search the area with his cadaver dog, Justice.

The landowner must give permission before they can search, Curtice said. For more information, call the Yakima County Coroner's Office at 509-574-1610 or visit the coroner's website.