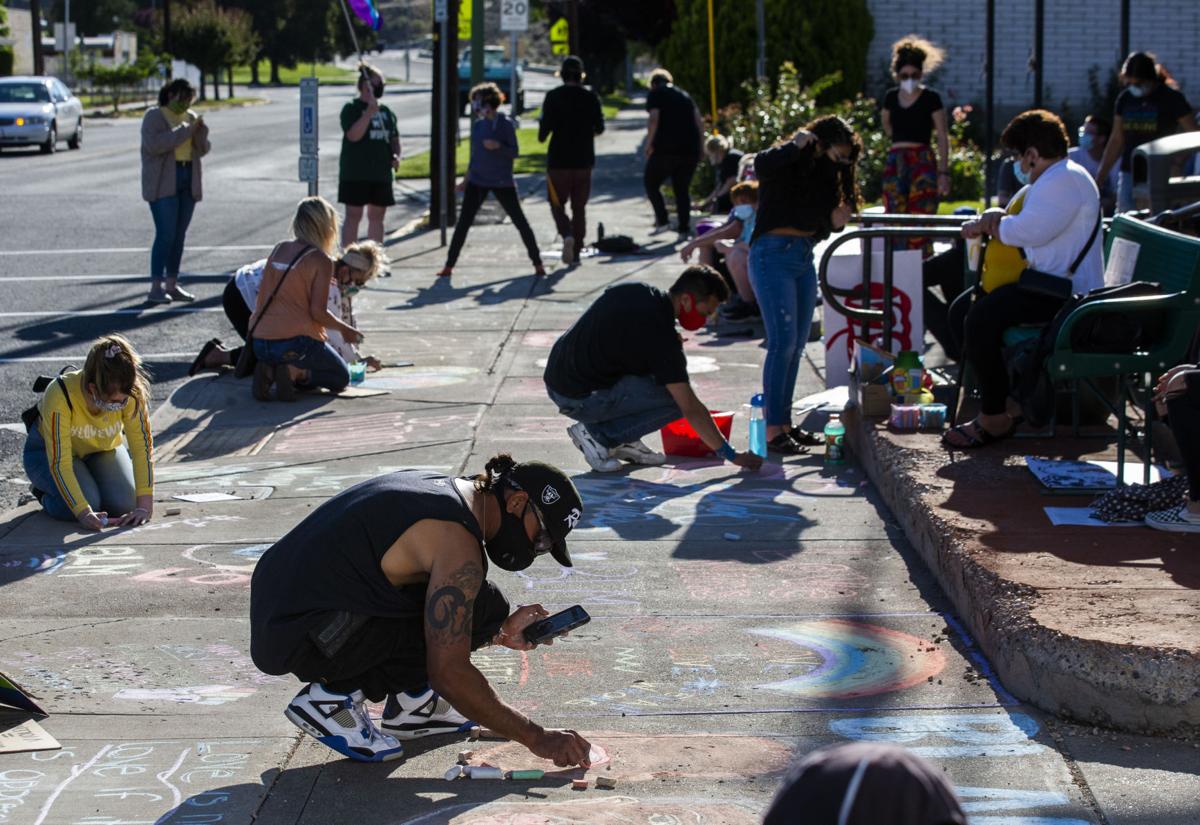 Protesters draw chalk art on the sidewalk and steps in front of Selah City Hall on Tuesday, June 30, 2020, in Selah, Wash. About 35 people marched from the Selah Civic Center to Selah City Hall where people took turns speaking about racism and LGBTQ discrimination before drawing and writing messages in chalk. 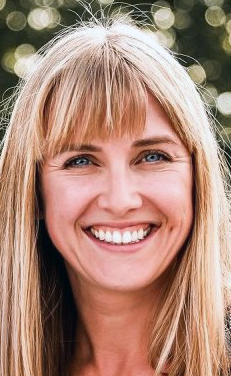 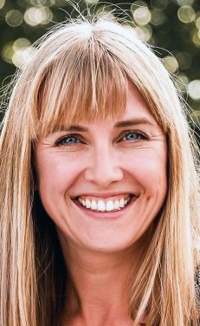 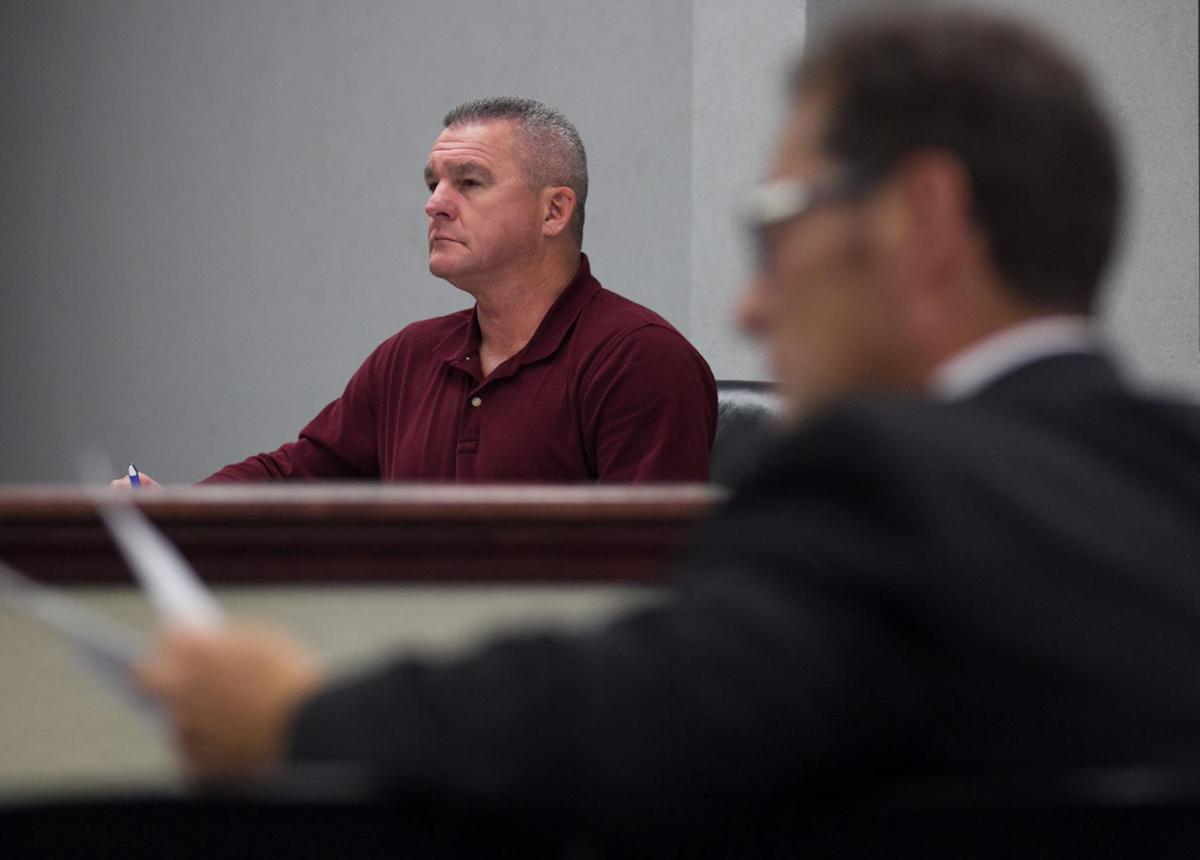 Less than two weeks after Selah officials settled two lawsuits alleging open-government law violations, the city is heading back to court on the same issue.

Bill Callahan, a Selah resident, has filed a lawsuit in Yakima County Superior Court alleging that City Council members illegally voted behind closed doors in July to authorize city workers to remove chalk art from city streets and sidewalks. The lawsuit names the city and the council as defendants.

It was the same allegation that was addressed in the settlement agreement council members approved Feb. 24, but Callahan’s attorney said that settlement doesn’t stop Callahan from proceeding with his own lawsuit.

“If you read that settlement agreement, it leaves the (Open Public Meetings Act) issue open,” said David Therrien-Power. “It does not appear to be settled in any form.”

City Administrator Don Wayman said the city has received the suit, and denied its allegations.

“Our position is, and has been, that it is a frivolous lawsuit and we will go forward with that position,” Wayman said.

Using information obtained in the earlier lawsuit filed by Trent Wilkinson, Callahan now has an email from a council member that says a “straw poll” took place in a closed meeting, something Callahan alleged has happened more than once.

“The Selah City Council has a long-standing practice of participating in meetings, taking votes and engaging in routine business practices that violate the OPMA during executive session,” the lawsuit states.

The lawsuit alleges that council members took an informal vote in an executive session July 14 to authorize city staff to remove chalk art from city streets. Under state law, the council can meet behind closed doors for specific, limited purposes such as discussing actual or potential lawsuits, personnel matters and property negotiations, but votes can only be taken in a public meeting.

At the time, supporters of the Black Lives Matter movement were using chalk to write messages supporting the anti-racism, anti-police-brutality movement as well as calling for Wayman to resign or be fired because of his repeated comments disparaging the movement and its local supporters.

Wayman directed city crews to remove the chalk art from streets and sidewalks, with City Attorney D.R. “Rob” Case referring to it as illegal graffiti.

At a July 28 council meeting, Wayman referenced the closed-door meeting when he asked if council members were backing away from their support of their earlier direction to remove the chalk art.

“We had two council members vote against cleaning it up,” Wayman said at the meeting. “But there were that five that voted for it, so where are we at here? Are we changing?”

Callahan’s lawsuit says meeting minutes show no public votes were ever conducted on the issue of chalk removal, but there was a closed-door meeting July 14, the day Wayman said the vote was taken, to discuss potential litigation.

On July 29, council member Suzanne Vargas sent an email to Mayor Sherry Raymond and council members stating her concern that executive session rules were being violated, including taking an informal poll.

Wilkinson filed two lawsuits, one in September alleging the open meetings violation, and the second in December after the city failed to respond to a Public Records Act request for any email addressing possible meetings act violations.

In January, Yakima County Superior Court Judge Gayle Harthcock ordered the city to release Vargas’ email, rejecting the city’s arguments that it was protected by attorney-client privilege and a city ordinance barring disclosure of the content of any closed-door meeting. Harthcock also found that the email contained evidence of an open-meetings violation.

Under the settlement, the city released an unredacted copy of the email and paid Wilkinson $45,000 to settle the public-records claim while admitting to no wrongdoing and saying the OPMA suit was frivolous, after Wilkinson dropped both lawsuits with prejudice, meaning neither he nor his attorney, Tim Hall, could refile them.

Callahan’s lawsuit asks that the court rescind any actions taken in the closed meeting, impose penalties on each council member who participated in the meeting, and order the city to comply with the law.