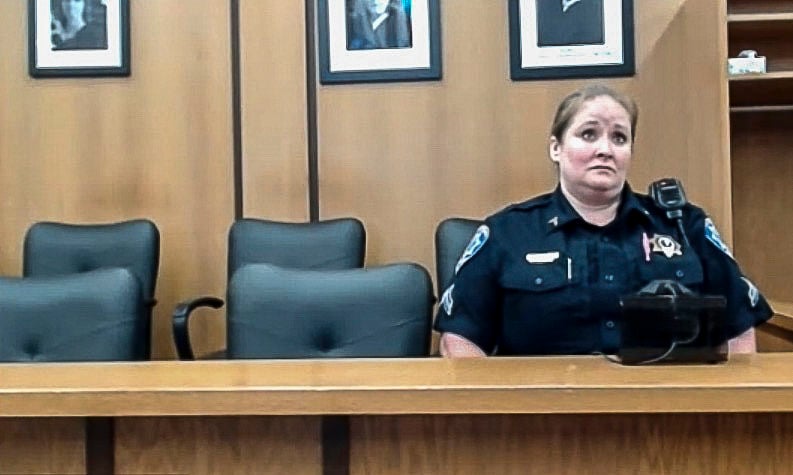 A screenshot from Yakima County Superior Court shows Yakima County Corrections Cpl. Krystal Lipp testifyig Friday, June 4, 2021, at the murder trial of Felipe Luis Jr. She was the shift sergeant at the time prosecutors say Luis and two other inmates killed a fellow gang member in the jail in December 2018. 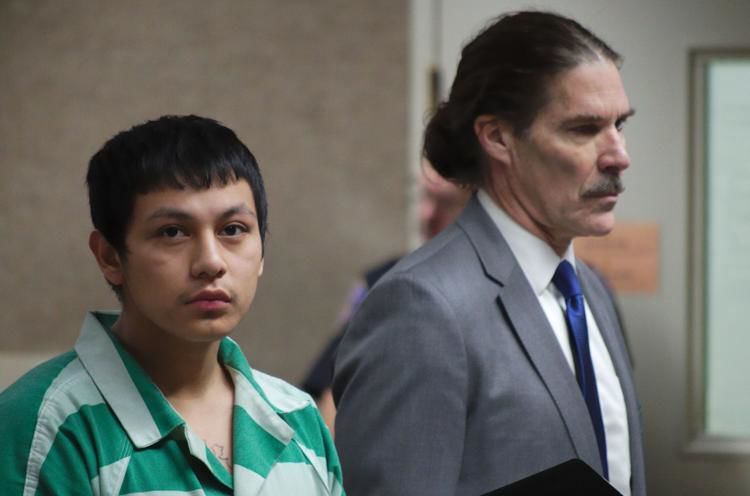 Yakima County Superior Court jurors watched a video Thursday of the attack that fatally injured a 36-year-old Norteño gang member at the Yakima County jail in 2018.

Luis, 21 is charged with aggravated first-degree murder in Ozuna’s death. If convicted, he faces a mandatory life-without-parole sentence.

The videos began shortly before a corrections officer did his hourly “walk-through” of the unit, and Ozuna was seen on the upper tier talking to a couple inmates through a hatch in the door of their cell.

Shortly after the guard leaves, the video shows Luis, Deryk Alexander Donato and Julian Luis Gonzalez, whom sheriff’s Detective Brian McIlrath pointed out to jurors, come up to Ozuna and begin attacking him with their fists and feet.

At one point in the video, Ozuna runs across the upper walkway toward a door with his assailants in hot pursuit, and the attack resumes. After a couple minutes, the video shows Ozuna’s attackers dragging him back across the tier by his legs and then down the stairs to the lower tier of the fourth-floor unit, with his head striking the steps.

On the floor, the attack resumes, and Ozuna is repeatedly kicked in the head.

During his testimony Thursday, Dr. Jeffrey Reynolds said the autopsy he performed found that Ozuna died when his brain swelled because of the repeated blows to his head and he stopped breathing.

Corrections Cpl. Krystal Lipp, who was the shift sergeant that night at the jail, also testified to the identity of the participants in the attack, and how she joined other officers in responding to the unit after a call was put out for help in the unit.

The attack lasted more than 13 minutes, prompting Luis’ attorney, Rick Smith, to question why an officer charged with monitoring the unit didn’t see the attack sooner on a desktop monitor.

“He could have glanced over (at the monitor), seen it happening, called for backup and stopped this from happening,” Smith said outside the presence of the jury.

Lipp, asked outside the jury’s presence, said she knew the guard was at his post filling out log reports at the time because of security video of that area of the jail. But since the video was not introduced as evidence, she was only allowed to tell jurors she had no direct knowledge that the officer was at that position, as she was on another floor at the time.

Smith also used the fight video to question the prosecution’s claim that the three intended to kill Ozuna for violating gang code by killing a fellow Norteño without authorization. He said Luis and the others knew about the cameras in the pod, and could have easily killed Ozuna in his cell — where the cameras wouldn’t see them — if that had been their intention.

Smith also presented two witnesses who said that Dario Alvarado, whom Ozuna was charged with killing in 2018, had earlier declared that he was a “drop-out” from the gang.

Denise Hackett, a retired corrections officer, and corrections Officer April Rosales said that when Alvarado was booked into the jail in April 2018, he told them as part of his booking process that he was no longer a gang member.

When inmates are booked into jail, corrections officers check on gang ties to ensure they are not placed in a unit with people who will attack them.

Rosales, under cross-examination, said it is possible for someone to say they had left a gang only to return to it.

Gonzalez, 23, of Toppenish entered an Alford plea in March to first-degree murder and was sentenced to 24 years in prison. Donato, 27, of White Swan is undergoing a mental competency evaluation after he reported hearing voices telling him what to do.

There was not one particular blow that killed Jacob Ozuna at the Yakima County jail, a medical examiner said.