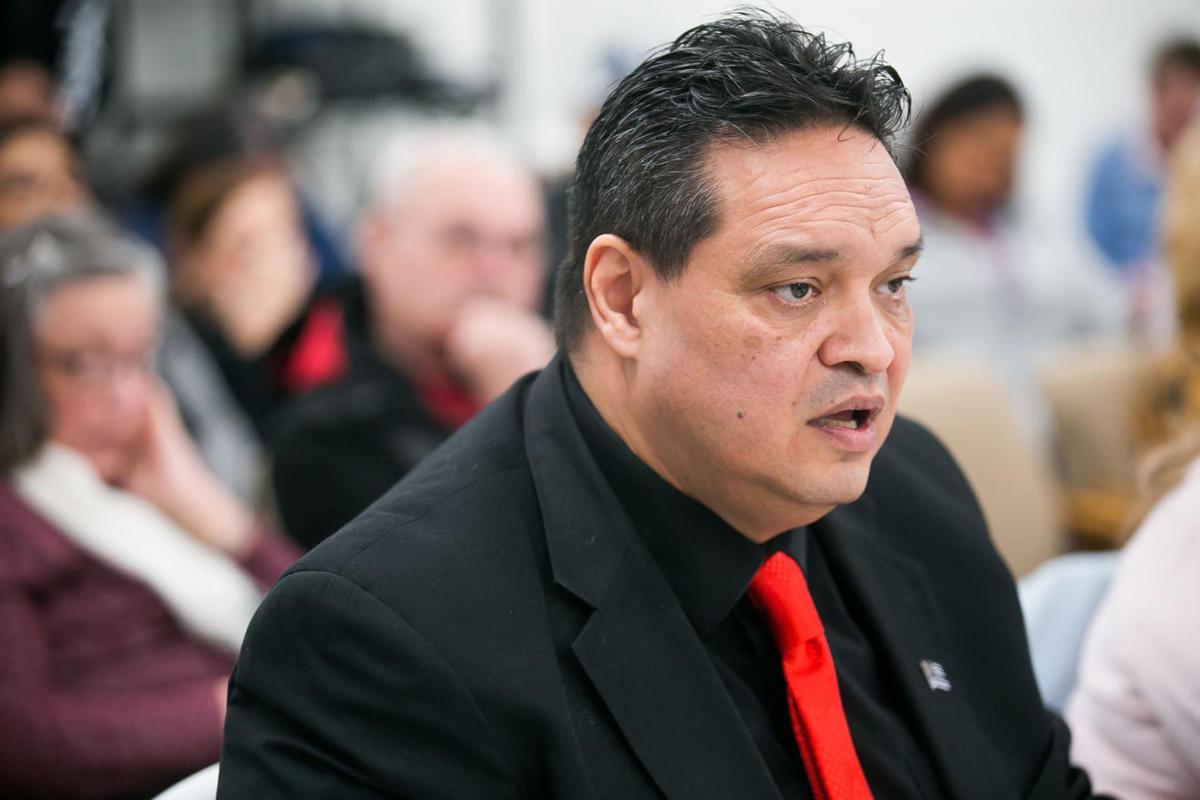 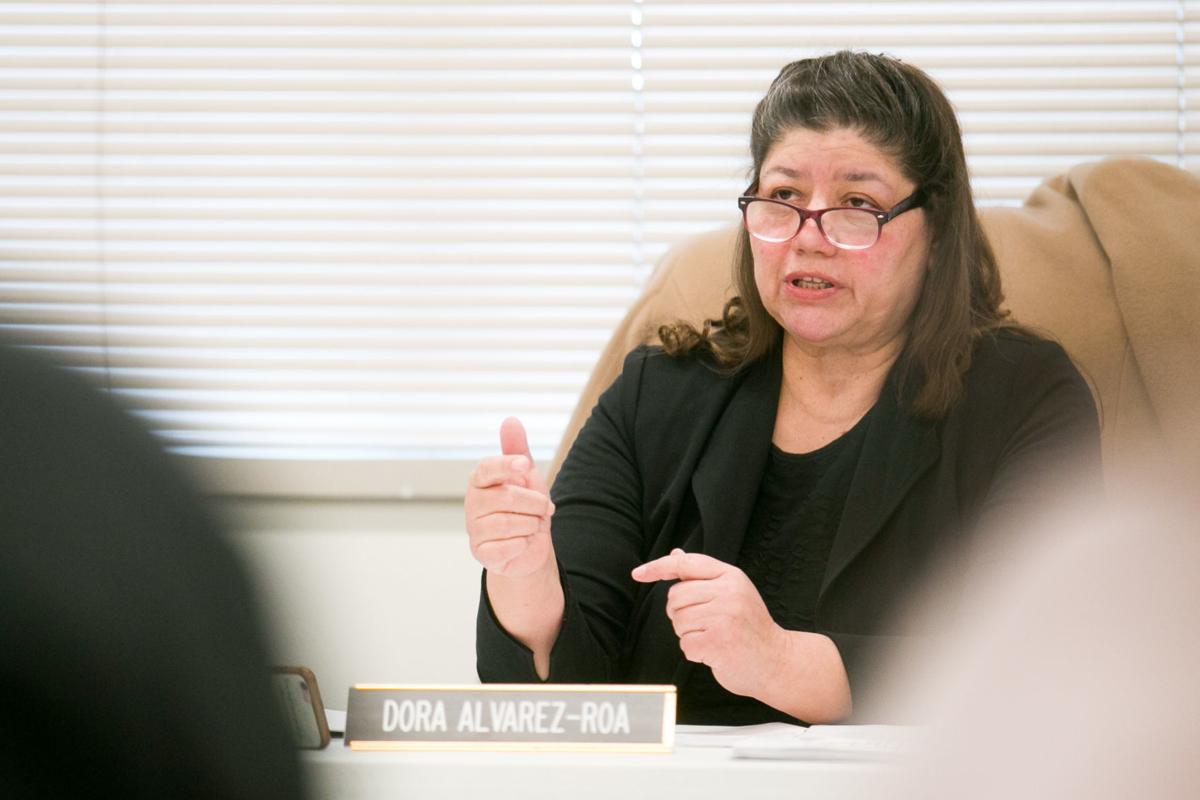 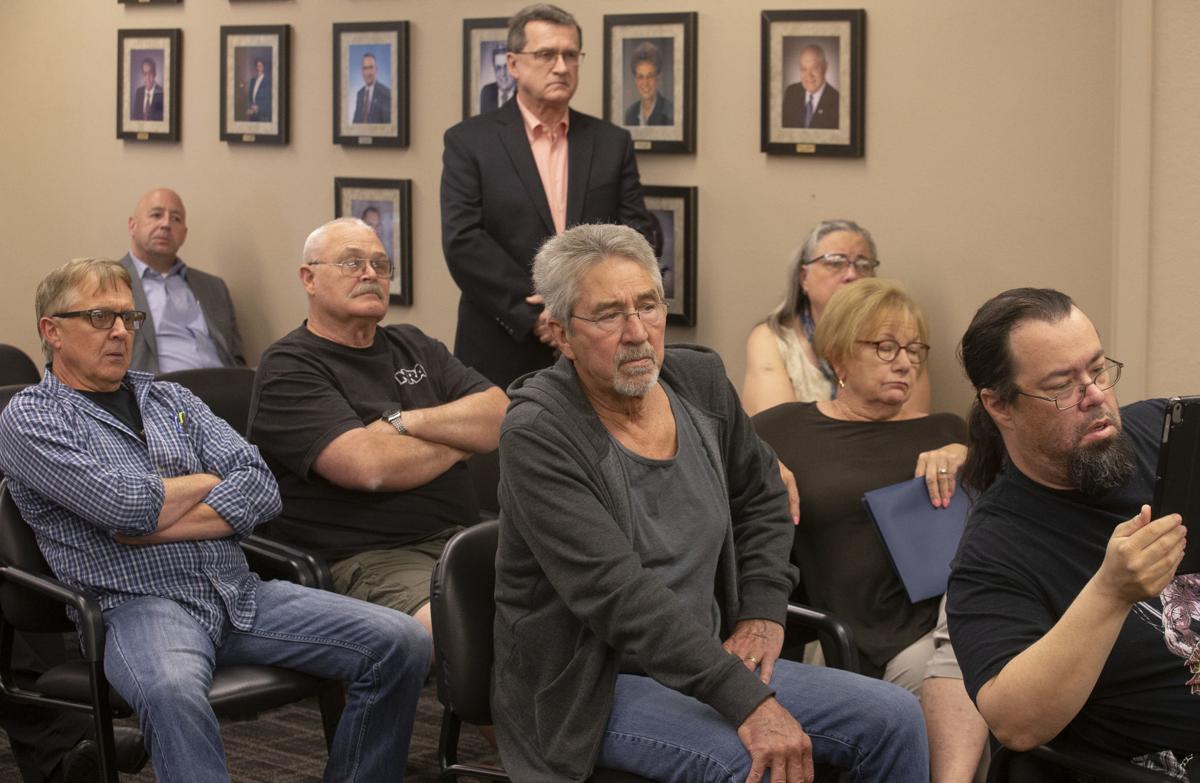 People listen to Yakima County Prosecuting Attorney Joe Brusic speak at a news conference May 2 at Yakima City Hall about two audits of the city of Wapato. 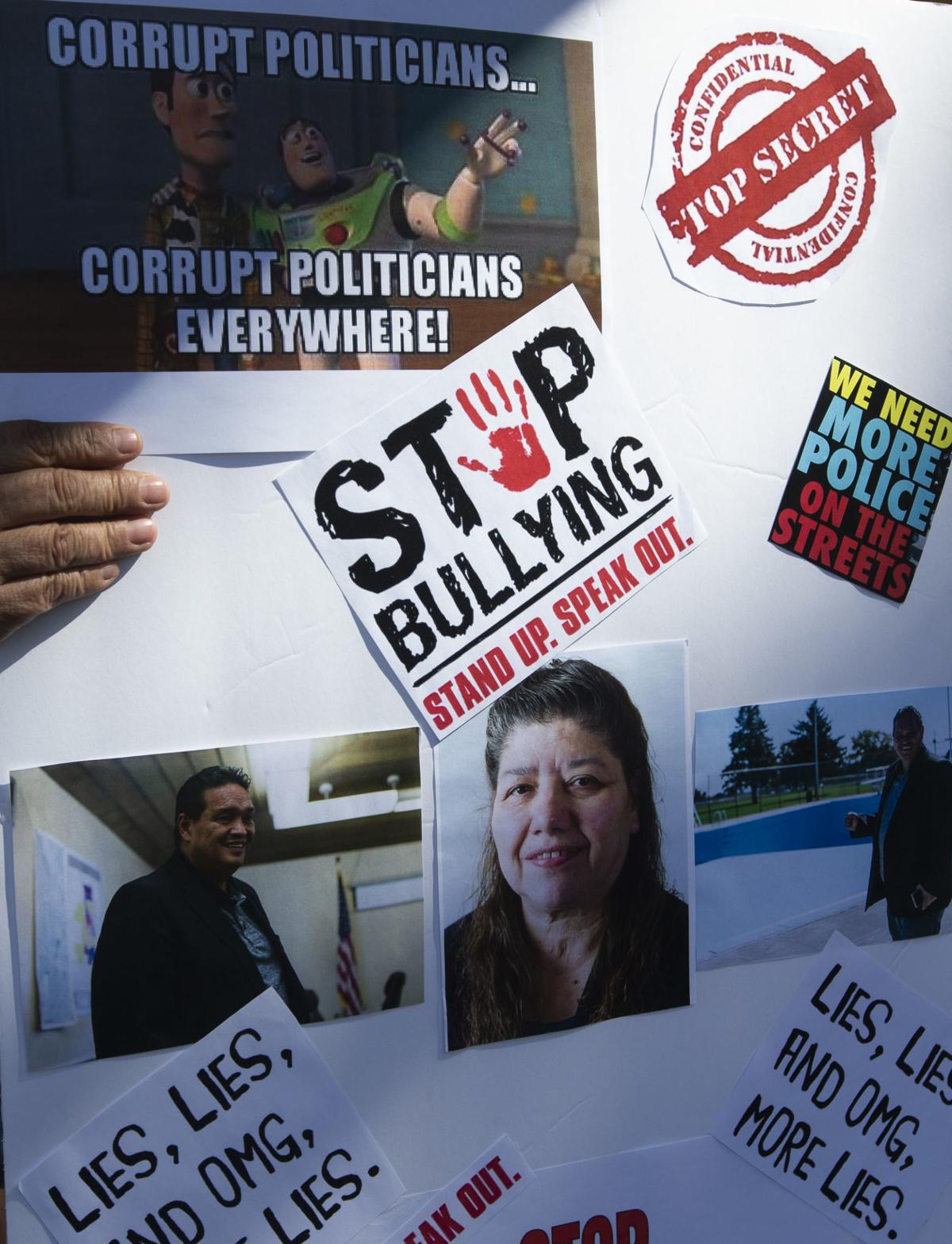 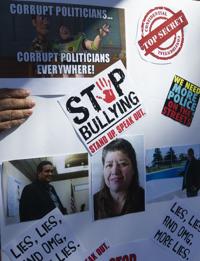 Caroline Solis holds a sign while protesting in front of Wapato City Hall following the publication of two audits by the Office of the Washington State Auditor on Thursday, May 2, 2019 in Wapato, Wash. 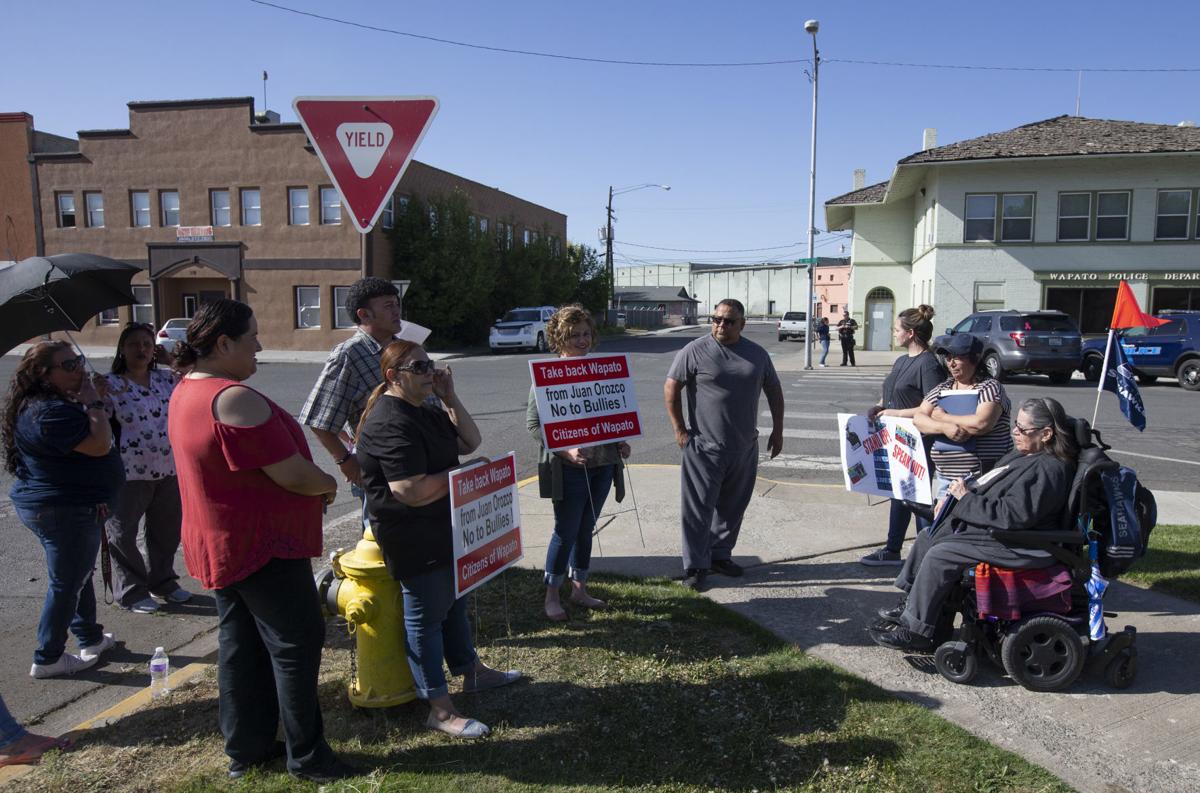 People protest Thursday, May 2, 2019, in front of Wapato City Hall following the publication of two audits by the Office of the Washington State Auditor. 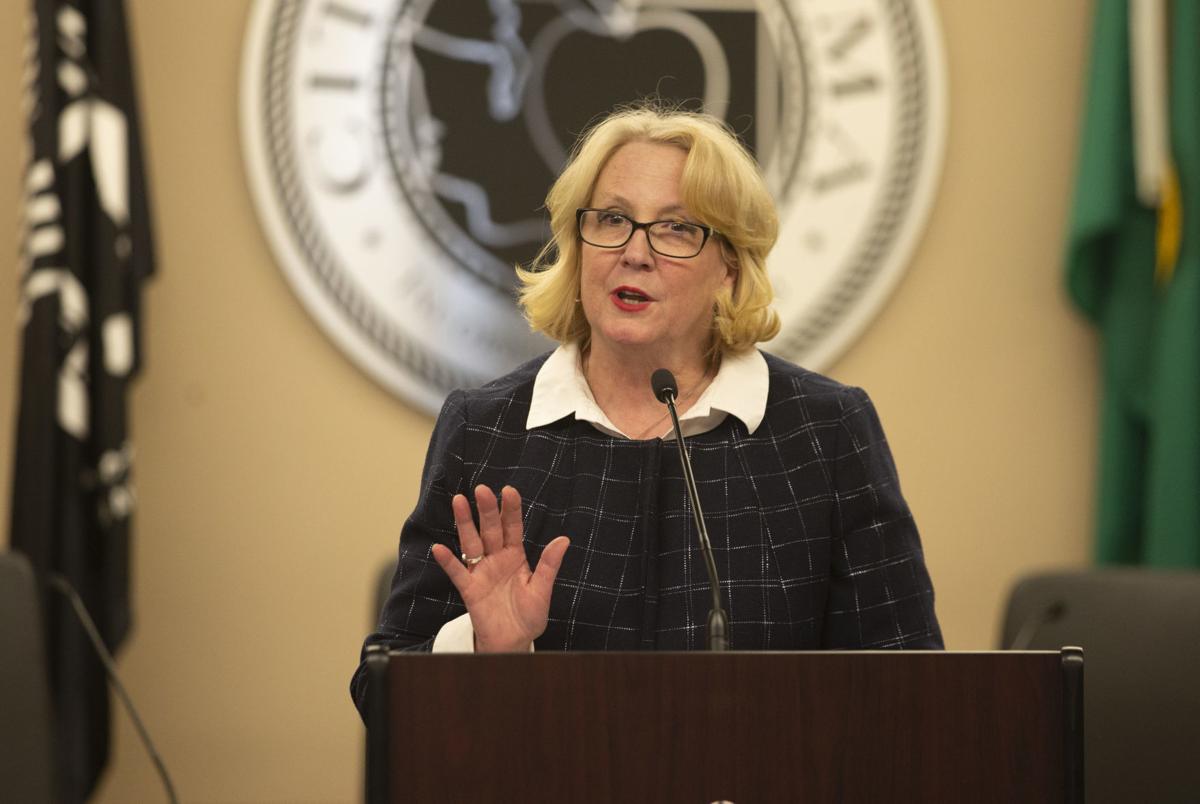 Washington State Auditor Pat McCarthy speaks May 2 at a news conference at Yakima City Hall about two audits of the city of Wapato published by her office.

People listen to Yakima County Prosecuting Attorney Joe Brusic speak at a news conference May 2 at Yakima City Hall about two audits of the city of Wapato.

Caroline Solis holds a sign while protesting in front of Wapato City Hall following the publication of two audits by the Office of the Washington State Auditor on Thursday, May 2, 2019 in Wapato, Wash.

People protest Thursday, May 2, 2019, in front of Wapato City Hall following the publication of two audits by the Office of the Washington State Auditor.

Wapato and its city administrator violated state law and showed an “egregious” disregard for open government and accountability, according to a state auditor’s report published Thursday.

The audit found that the city did not follow proper bidding requirements for major construction work, violated the state’s Open Public Meetings Act and the city’s hiring and recruiting policies, and misappropriated $243,000 in taxpayer fees — almost half of which went to paying a portion of the city’s legal costs.

Auditors also found that City Administrator Juan Orozco violated the municipal code of ethics when he created and accepted the position.

“In summary, this audit revealed an alarming disregard for the accountability and transparency that is the foundation for public trust in government,” wrote State Auditor Pat McCarthy. “Multiple audits performed by this office have highlighted egregious actions of city officials.”

The audit, which covered city activities from Jan. 1-Dec. 31, 2018, also noted that the city has not made it a priority to ensure previous audit recommendations were resolved promptly.

The city, in response to the findings, noted high turnover in staff, a deficit due to fraud by previous administrations, and faulty counsel by the city’s former attorneys.

The auditors did not accept the city’s justifications.

State law says those in power cannot use their positions for personal gain or special privilege.

The audit found that Orozco, acting as mayor, violated those conditions when he first created a city administrator position without appropriate notice or input from the City Council, and then accepted that position.

The audit notes that Orozco worked with the city attorney in August 2018 to draft the city administrator position — including a $95,000 annual salary, payable for seven years.

The audit noted that Orozco ignored state conflict of interest laws throughout the process — personally benefiting without council knowledge or input.

The payout of the seven-year contract, regardless of whether Orozco is terminated in that time, constituted a further violation of state law because it would “bind” future City Council actions, which was prohibited by a former state Attorney General interpretation of law.

In response, the city noted that council members had two opportunities to question the position and that “The city’s personnel policies provide that the policies may change and that the City Council reserves the right to ‘revise, supplement, clarify or rescind any policy or portion of a policy when deemed appropriate by the mayor.’”

The audit noted that the “two opportunities” provided to council — at the 8:30 a.m. special meeting and the 9 a.m. regular meeting Sep. 4 — happened after the city administrator position had already been drafted and put into Orozco’s name.

The audit also noted that any changes to city policy must be made in writing, with proper notice given — neither of which happened.

The audit found that the city violated the state’s Open Public Meetings Act by not holding or properly advertising regularly scheduled meetings and by carrying on government proceedings without a quorum of council members.

Those violations include the Sept. 4 meeting at which Orozco was named city administrator and Alvarez-Roa was appointed mayor. The audit noted that the advertisement did not include the business purpose for that meeting, a requirement of state law, and also that the agenda was not posted until Oct. 9 — almost a month after the meeting.

The problems with the meeting happened in part because the mayor and newly appointed council members did not fully understand state open meetings law or the importance of documenting meeting compliance with the act, the audit noted.

Wapato, in response, asserted that all city staff had received training and that council members had received adequate notice of meetings, adding it was “difficult to determine whether and how public notice was provided” due to turnover in the city clerk’s office.

As for meeting without a quorum of council members, the city said it had relied on the advice of its former attorneys but had a new city attorney who was “extensively” versed in public meetings law.

State law prohibits funds for specific uses — for example, usage-based utility fees — from being used for other government functions.

The audit reviewed allegations that Wapato had improperly transferred transportation benefit district funds to the cemetery fund, but found no inappropriate transfer had occurred.

The audit notes that the funds qualify as “restricted use,” meaning that because the funds are created by fees that city residents pay for services, the money in the fund must somehow go back to serving those residents in that capacity.

Wapato should have paid for the pool renovations and its legal fees through its current expense fund, the audit noted — with a recommendation that the city find a way to repay the misappropriated garbage and sewer funds.

The city, in response, said its former financial officers did not have municipal experience and Wapato was looking at options for paying back the funds. The city also said the misappropriation of $300,000 from past administrations left the city with a starting deficit in 2018, but the auditor’s office said that was not an acceptable excuse.

“We disagree that the fraud reported in February 2019 was a significant cause in the city’s declining financial condition for 2018,” the audit said.

The audit found the city’s general fund cash and investments decreased by $665,741 during 2017 — prior to Orozco’s takeover as mayor — but only $76,891 was attributed to fraud in that year. The audit also noted that the misappropriation of $308,199 had taken place over a six-year period, ending in 2018.

The state auditor’s office first brought up concerns about nepotism in a March 2018 letter to city administration, noting that the appointment of Orozco’s daughter Ericha Rocha to a deputy clerk position in February, after he had been elected as mayor. The appointment violated Wapato’s nepotism policy.

Auditors found that Rocha received a raise from March to August 2018, resulting in an unauthorized overpayment of $133. As a new employee, she shouldn’t have received an increase. The audit notes that Rocha’s pay then returned to its original rate.

Additionally, Rocha recorded 12 hours of overtime during one pay period but was paid $144 for 17 hours of overtime, and the city could not produce one of her time sheets, accounting for $2,815 in unsupported payroll expenditures.

The city’s response was that Orozco, acting as mayor at the time, was not an employee of the city and therefore the city personnel policy did not apply to him. Later, as city administrator, he did not have the authority to terminate employees.

The auditor’s response was that the appointment had violated nepotism policy.

Other issues identified in the audit:

Additional concerns — including allegations that public employees were using city equipment for Orozco’s personal gain and that Orozco was walking around town with “thousands” of city dollars in his pockets — were not reviewed by the most recent audit, though the report noted that no evidence of the allegations surfaced during the audit.EDITOR’S NOTE: This story has been updated with additional findings from the audit report.