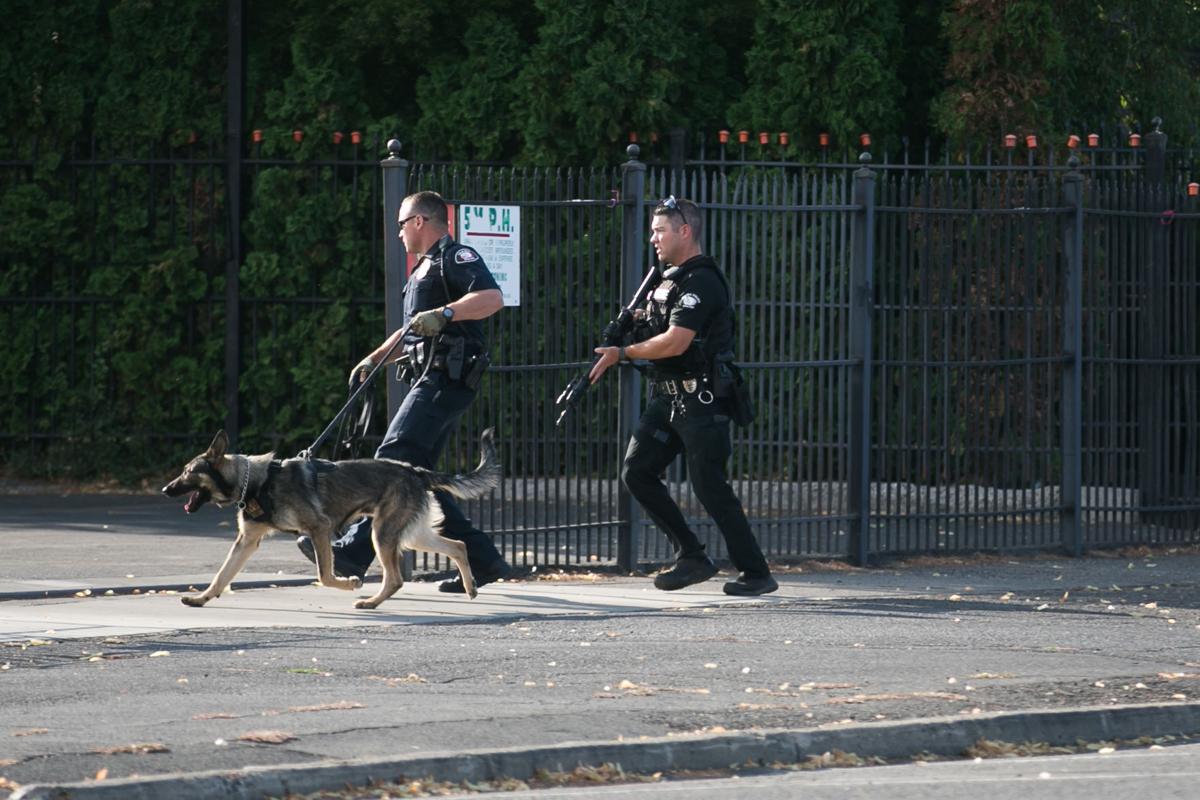 FILE—Yakima police use a police dog to search for a man suspected of possession of a stolen motor vehicle Saturday, July 6, 2019, on Lincoln Avenue in Yakima, Wash. 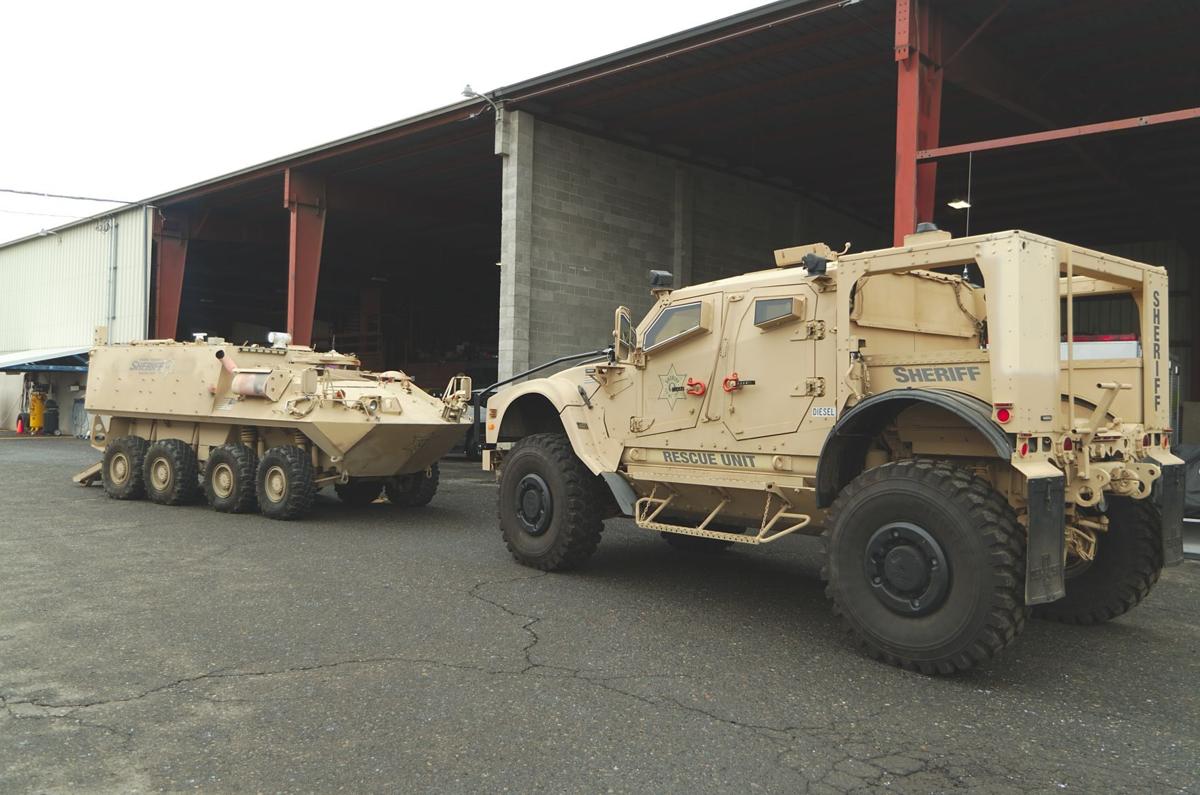 FILE—Yakima County's mine-resistant, ambush-protected vehicle, right, at the Yakima County Sheriff's Office Tuesday, Dec. 17, 2019. State lawmakers are discussing the use of military vehicles by police. An earlier provision in a bill that banned the use of unarmed armored vehicles was removed, although tanks equipped with guns would be prohibited. 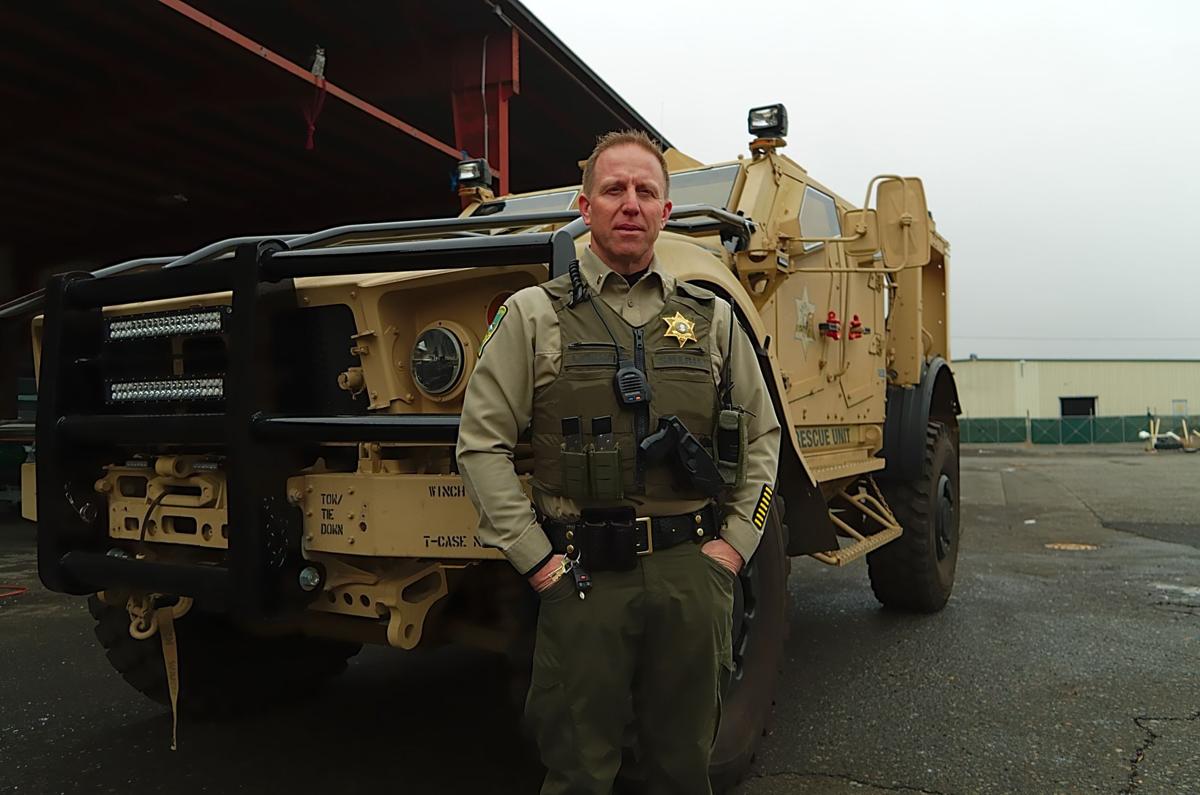 FILE—Yakima County sheriff's Lt. Aaron Wuitschick stands next to a military surplus mine-resistant, ambush-protected vehicle Tuesday, Dec. 17, 2019. The vehicle is used to assist the Yakima SWAT Team and provide armored cover for deputies as needed. State lawmakers are discussing the use of military vehicles by police. An earlier provision in a bill that banned the use of unarmed armored vehicles was removed, although tanks equipped with guns would be prohibited.

FILE—Yakima police use a police dog to search for a man suspected of possession of a stolen motor vehicle Saturday, July 6, 2019, on Lincoln Avenue in Yakima, Wash.

FILE—Yakima County's mine-resistant, ambush-protected vehicle, right, at the Yakima County Sheriff's Office Tuesday, Dec. 17, 2019. State lawmakers are discussing the use of military vehicles by police. An earlier provision in a bill that banned the use of unarmed armored vehicles was removed, although tanks equipped with guns would be prohibited.

FILE—Yakima County sheriff's Lt. Aaron Wuitschick stands next to a military surplus mine-resistant, ambush-protected vehicle Tuesday, Dec. 17, 2019. The vehicle is used to assist the Yakima SWAT Team and provide armored cover for deputies as needed. State lawmakers are discussing the use of military vehicles by police. An earlier provision in a bill that banned the use of unarmed armored vehicles was removed, although tanks equipped with guns would be prohibited.

When Yakima police Chief Matt Murray started out as a police officer in the 1990s, the options for using less-lethal force were limited.

“We had our guns, batons and pepper spray,” Murray said. “Today we have more options that are less lethal.”

But Murray and his counterpart at the Union Gap Police Department say a pair of bills in the Legislature threaten to take away some of the less-lethal options police have, which they warn could result in officers using more severe and even deadly methods to control a suspect or protect themselves.

“We don’t want to be in a position where the only force option is to use lethal force,” said Union Gap Chief Greg Cobb. “I think there is a fundamental lack of understanding” of how police use force.

The proposals in Olympia would prohibit police from using patrol dogs, neck restraints, tear gasses and certain military equipment. State Rep. Roger Goodman, a Kirkland Democrat, said the bills are still in the fundamental stages and are the subject of ongoing negotiations. They are not meant to hobble a police officer who is in mortal danger or protecting people in harm’s way, he said.

“If an officer needs to save a life or defend his own life, he can use whatever tactics he can,” said Goodman, who chairs the House Public Safety Committee.

The committee’s vice chairman, Federal Way Democrat Jesse Johnson, is sponsoring two bills that address issues of police tactics and the use of force. The bills come amid concerns about how police use force in the wake of nationwide demonstrations last year.

The protests came after George Floyd died after a Minneapolis police officer knelt on his neck for almost nine minutes in May. In Seattle, police were criticized for using tear gas on protesters, prompting a ban on the use of certain police tactics as well as a lawsuit alleging police used “unnecessary violence” to quell the unrest.

“In many cases, bad policing is a result of bad policies,” Johnson told the committee at a Jan. 12 hearing on one of his bills. “As a result, we have seen evidence this year of unnecessary violence and tactics that have produced negative outcomes, primarily for communities of color.”

While most police officers serve honorably, Johnson said, there is systemic racism in all institutions, including law enforcement. And, with policies on police tactics and conduct varying between agencies, it makes it more difficult for communities of color to trust police.

House Bill 1054, which Johnson said establishes a “baseline” for tactics and equipment that can be used, includes provisions that would ban police from using neck restraints, which are mistakenly called chokeholds. It also would prohibit police from using dogs to apprehend suspects and using certain varieties of tear gas.

It would impose restrictions on when police may engage in car chases or fire on a moving vehicle, as well as bar officers from covering up their badge numbers or other identification on their uniforms.

The other bill, House Bill 1310, would mandate that deadly force can only be used as a last resort, as well as eliminate the provision requiring prosecutors to prove an officer acted in “good faith” when using deadly force.

Goodman, who brokered the compromise between law enforcement and police reform advocates on legislation that established the good-faith standard, said 1310 will not be going to the full floor in order to have more discussion between both sides on the measure.

YPD has already banned neck restraints in almost all circumstances on its own as part of a push for de-escalation, but Murray said that eliminating patrol dogs for apprehending suspects would have unintended consequences that could lead to more deadly confrontations. He said a police dog is considered a less-lethal use of force that can keep a situation from escalating.

His department came under fire last year when a YPD officer used a police dog to assist a Washington State Patrol trooper arrest a suspected drunken driver who was struggling against the trooper and two bystanders who were trying to pin him down. Murray, after a YPD review that included a K9 trainer from Spokane, determined that having the dog bite the man’s leg until he complied was a justifiable use of force.

“It is important to point out that force doesn’t look good, but that doesn’t mean it is bad,” Murray said. “We use the least amount of force.”

If neck restraints, in which pressure is applied to the arteries of the neck to subdue a person, and police dogs aren’t options, officers might have to resort to other methods, such as striking people or resorting to deadly force, Murray and Cobb said.

“Would you rather be bitten by a dog or shot? Because those are going to be the only two options available,” Cobb said.

While a police officer would be allowed to use neck restraints in a life-or-death situation under the bill, Cobb said if an officer is at a do-or-die moment they will more likely go with lethal force. Neck restraints, properly used, prevent that escalation, Cobb said, especially when an officer is physically mismatched against a larger person.

The bill also would restrict the use of equipment from the federal government’s military surplus program, such as large-caliber rifles, machine guns, grenade launchers and bayonets.

Goodman said an earlier provision in the bill that banned the use of unarmed armored vehicles was removed, although tanks equipped with guns would be prohibited.

In an earlier interview, Sheriff’s Lt. Aaron Wuitschick said YSO’s vehicles, which includes a troop transport and an MRAP, can be used both to provide cover for deputies in a standoff situation, as well as allow deputies to safely evacuate people in a mass shooting.

Goodman said the intent is to avoid the perception that police are an occupying force instead of an agency charged with protecting and serving the community.

It’s a point Murray appreciates, noting that he believes police should not be looking like soldiers, whether in the color of the uniform or the gear officers are carrying.

The bill also bars the use of CN and CS tear gasses. Goodman pointed out that those gasses are outlawed for use in warfare under international treaties.

Police would be allowed to use pepper spray.

Cobb said the tear gasses would never be used against peaceful protestors, and he said that their use, along with other less-lethal munitions, meant Seattle police avoided having to resort to firearms against those he described as “rioters.”

Police mainly use tear gas in standoff situations, Cobb said, which allows officers to take someone into custody without having to resort to more lethal means.

Cobb said better options for reform include addressing civil service requirements that make it difficult to remove problem officers, as well as recognizing that officers don’t always have the option of de-escalating a situation.

Rep. Gina Mosbrucker, R-Goldendale, was one of five committee members who voted against moving the bill to the full House for consideration. Like Murray and Cobb, she was concerned that the measures would compromise officers’ safety, especially if police dogs are not permitted.

In addition to officer safety, Mosbrucker said the dogs also do double duty as goodwill ambassadors for police.

She was satisfied that Johnson is willing to continue discussion the bill as it advances and is interested in amending it if needed.

Goodman said the bill is still in the early stages, and will foster further discussion. As for police dogs, he said there will likely be a task force formed to discuss best practices for using the dogs.