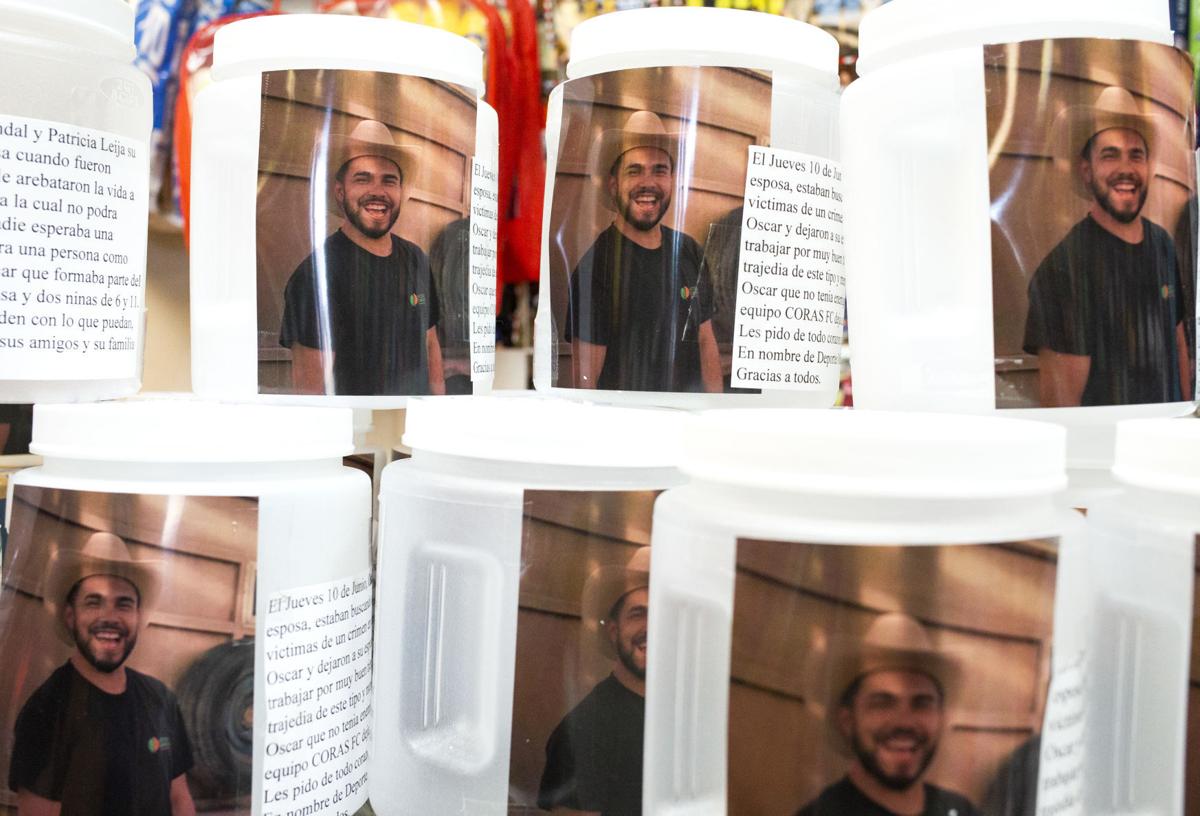 Donation jars created to raise money for a reward for information about Oscar Hondal-Lopez's killers are pictured Friday, June 18, 2021, in Yakima, Wash. 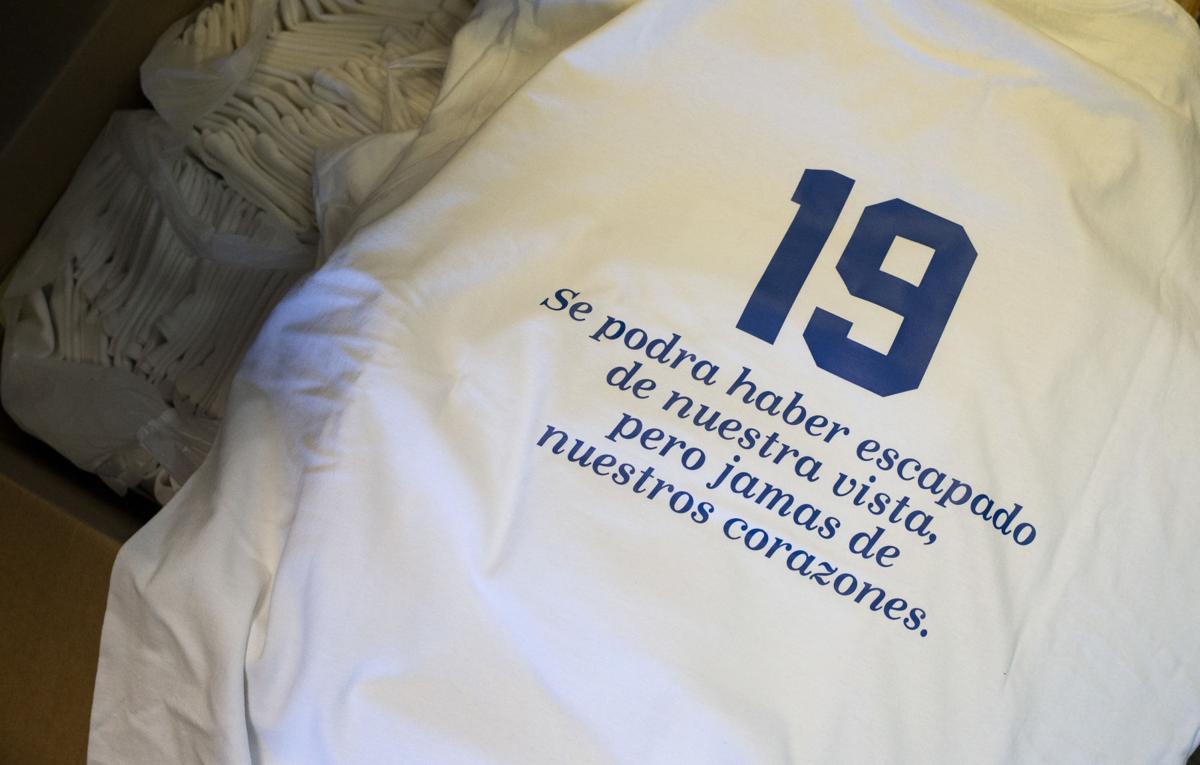 T-shirts made to raise money for a reward for information about Oscar Hondal-Lopez's killers are pictured Friday, June 18, 2021, in Yakima, Wash. 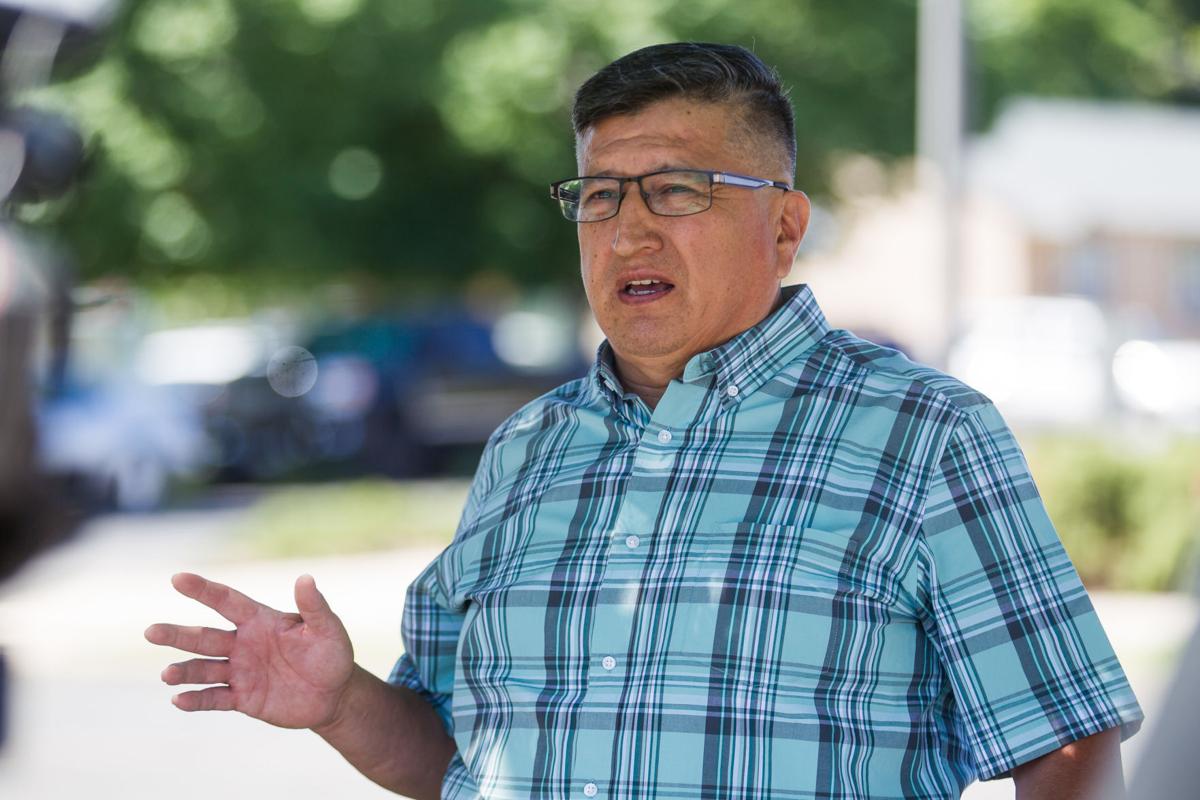 Tony Sandoval provides information regarding a reward for tips leading to an arrest of Oscar Hondal-Lopez’s killers Friday, June 18, 2021, during a news conference near the Yakima Police Department in Yakima, Wash.

Donation jars created to raise money for a reward for information about Oscar Hondal-Lopez's killers are pictured Friday, June 18, 2021, in Yakima, Wash.

T-shirts made to raise money for a reward for information about Oscar Hondal-Lopez's killers are pictured Friday, June 18, 2021, in Yakima, Wash.

Tony Sandoval provides information regarding a reward for tips leading to an arrest of Oscar Hondal-Lopez’s killers Friday, June 18, 2021, during a news conference near the Yakima Police Department in Yakima, Wash.

An organizer hopes to raise a $500 reward for information leading to the arrest of a 30-year-old Yakima man’s killers.

Tony Sandoval, who is also a candidate for Yakima City Council, said $249 has been raised so far, and he plans to solicit additional funds at Yakima County Soccer League games, where Oscar Hondal-Lopez used to play.

Hondal-Lopez was killed and his wife, 26-year-old Patricia Leija, was wounded in a drive-by shooting in the 1200 block of Cornell Avenue on June 10.

Police said the couple were in the area looking for a house for sale when they were harassed by gang members in a car. Hondal-Lopez sped away, but their assailants chased them, firing multiple shots at Hondal-Lopez’s car, police said.

He was struck in the neck with a bullet and died at the scene, while Leija was hit in the hip, police said. She was treated and released from a local hospital.

Neither Hondal-Lopez nor Leija had any ties to gangs, police said.

“This guy was clean,” Sandoval said.

Hondal-Lopez was a mechanic at Roy Farms in Moxee and played in the soccer league. Another player said they nicknamed him “Payaso” — Spanish for clown — for his light-hearted disposition on the soccer field.

“He was always cracking jokes and had an outgoing personality,” recalled the player, who asked not to be identified.

Sandoval said he and others will solicit donations at soccer games, and encourage people to take donation canisters to local businesses to further raise money. The initial goal, he said, is to raise $500, with a secondary goal of $1,000.

The reward money will be handled by Yakima County Crime Stoppers, Sandoval said.

Hondal-Lopez’s death was the sixth homicide in Yakima this year and the 14th in the county.

Anyone with information on the case is asked to call Yakima police at 509-575-6200 or Yakima County Crime Stoppers at 800-248-9980. Tips can also be submitted online at http://www.crimestoppersyakco.org.

Alfred Anaya, 67, of Toppenish died Jan. 1 after he was hit in a head-on collision on U.S. Highway 97 near Wapato High School. Luberto Fernandez Rodriguez has been charged with first-degree murder in his death. The Washington State Patrol is investigating.

Charles Ellis Wade Mills, 45, of Yakima was fatally shot at his home in the 900 block of South 29th Avenue Jan. 27. Yakima police arrested his stepson, Jonathan A. Hidalgo, 18, on suspicion of second-degree murder.

Victor J. Ramos, 28, was found shot in the 1200 block of Roosevelt Court in Sunnyside Jan. 31, and later died at Astria Sunnyside Hospital. Adrian Bueno, 28, and Francisco Rudy Gallardo, 41, have been charged in the killing. Sunnyside police are investigating.

Roger Harrington, 66, and Tyler Aalbu, 32, were found inside a burned home at 2210 S. Fifth Ave. in Union Gap following a March 28 fire. Union Gap police said the fire was deliberately set and the men died of smoke inhalation.

Tiana Lee Rain Cloud, 20, was killed in a shooting in the 3100 block of S. Wapato Road around 11 p.m. March 30. The FBI is investigating because the victim was a citizen of the Yakama Nation and the killing occurred within the Yakama Nation's reservation boundaries.

Caspar Garcia Villicana, 42, was found dead with multiple stab wounds in his home in the 1100 block of South 32nd Avenue May 1. Yakima police arrested Gilberto Guzman, 44, on suspicion of second-degree murder in the case.

Diana Calixtro, 27, of Yakima died May 8 after being shot outside a home in the 1100 block of South Fair Avenue. Russell Paul Whitefoot, 32, of Wapato has been charged with first-degree murder in the case. Yakima police are investigating.

Andre Terrence Harrell, 29, of Granger, was fatally shot in an apparent drive-by shooting at the intersection of Fourth Street and Bailey Avenue May 22. Yakima County Sheriff's Office and Granger police are investigating.

Marcus Lagmay, 32, of Wapato, was shot in the 100 block of Egan Road in the Wapato area. The FBI and Yakama Nation Tribal Police are investigating.

Jose Mendoza-Martinez, 38, was fatally shot after Yakima police said he broke into a home at the Almost Sunshine RV Park, 218. E. N St., June 24. Yakima County Prosecuting Attorney Joe Brusic found, after reviewing the Yakima police investigation, that the killing was an act of self-defense.