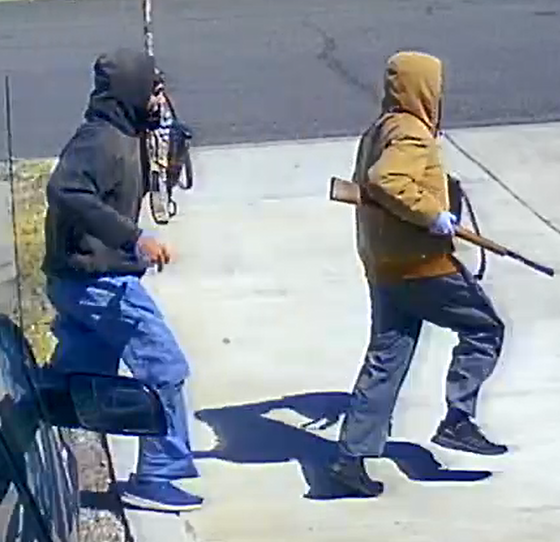 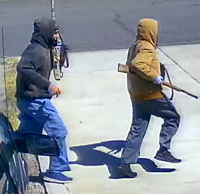 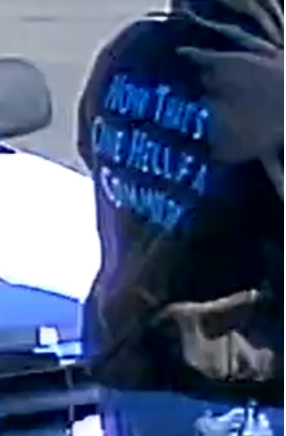 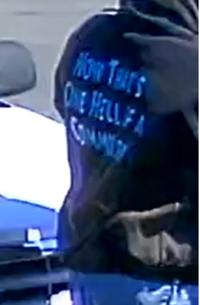 A Terrace Heights man who was shot during a robbery May 6 has died, the Yakima County Sheriff’s Office announced.

Ronald Leroy Carl Born, 34, was shot during the incident at a home in the 600 block of North 39th Street, according to the sheriff’s office. He died Sunday at Harborview Medical Center in Seattle, sheriff’s spokesman Casey Schilperoort said.

Deputies were called to the home around 2:30 p.m. for an initial report of a disturbance, and while en route were told that a man had been shot, according to the sheriff’s office.

Detectives have released photos from a security camera showing two men with guns at the house, the release said. Detectives believe the pair came to the house to steal something but did not find it, Schilperoort said.

A woman was injured in the attack, and was treated and released from a local hospital, the release said.

Born’s killing is the 17th homicide in Yakima County this year.

Anyone with information on the case is asked to call sheriff’s Detective Mike Williams at 509-574-2569 or Yakima County Crime Stoppers at 800-248-9980. Tips can also be submitted online at http://www.crimestoppersyakco.org.

Miguel Martinez-Vasquez, 24, and Alyson Harris, 32, were found dead and partially burned in the 5600 block of Desmaris Road near Moxee Jan. 7. Jesus Antonio Perez Jr., 20, was arrested in connection with the deaths.

Emilee Harris Escamilla, 30, was found strangled to death in her Selah home on Jan. 24. Authorities say her husband and suspected killer, Daniel Escamilla, was found dead of a self-inflicted gunshot wound in Kittitas County near the Yakima Training Center.

Linda Berukoff, 58, was found beaten to death in the 800 block of North Front Street in Yakima Jan. 30. Yakima police are investigating the case.

Maria Elena Luna-Corona, 35, was fatally shot while riding in a vehicle on Interstate 82 near Selah Feb. 8. Yakima County Sheriff’s Office is investigating the case.

Carmen Sanchez, 67, of Granger, was fatally shot when someone fired shots at her home on Feb. 8. Yakima County Sheriff's Office is investigating the case.

Tara Owen, 31, of Yakima, was fatally shot in an alley in the 1100 block of Folsom Avenue. Yakima police are investigating.

Raymond Graham, 56, was found fatally shot in his home in the 1300 block of North Track Road near Renegade Raceway March 15, 2020. Beau David Hays, 17, was charged with second-degree murder as an adult in connection with the killing.

Maria Martinez, 50, and Shante Barney, 23, were stabbed to death in a trailer home in the 11000 block of Branch Road April 9. Edward C. Robinson, 33, of Wapato was arrested in connection with the killings.

Jesus Gomez-Reyes, 46, was found dead with a gunshot wound in the 100 block of Donald Road in Wapato April 17. Wapato police and Yakima County Sheriff's Office are investigating.

Cristian Silva-Hernandez, 23, of Mabton was found shot to death in a field near the intersection of Charvet and Hornby roads April 19. Yakima County Sheriff’s Office are investigating.

Francis M. Gallagher, 73, of Yakima died after he was stabbed in an apartment in the 400 block of North Sixth Street April 22. Yakima police arrested a 20-year-old man on suspicion of second-degree murder in connection with Gallagher's death.

Alexander Lynch, 1, of Yakima, was found unconscious in an apartment at 1210 S. 72nd Ave. around 2 a.m. April 27. He died at Harborview Medical Center in Seattle later that day from blunt-force trauma to his skull. Yakima police are investigating.

Danny Lee Branscomb, 39, a Yakima man who police said was a gang member was shot in the 1600 block of Gordon Road in Yakima May 12, 2020, and later died at Virginia Mason Memorial Hospital. Yakima police are investigating.

Francisco Cortes-Ochoa, 34, of Toppenish was found shot to death in a car in the 600 block of SLI Road near Sunnyside May 17, 2020. Yakima County Sheriff's Office is investigating.

Ronald Leroy Carl Born, 30, of Terrace Heights died May 17, 2020 at Harborview Medical Center in Seattle. He had been shot May 6, 2020, at his home in Terrace Heights. Yakima County Sheriff's Office is investigating.