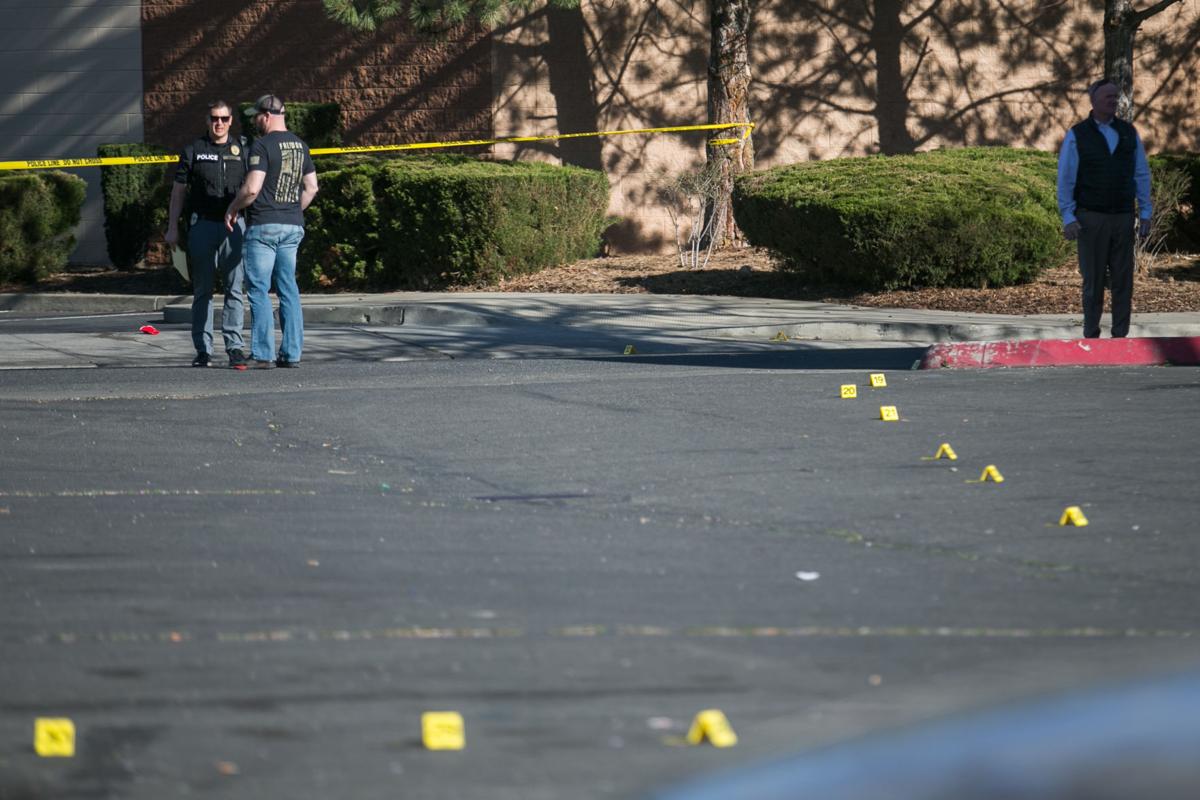 A 37-year-old Yakima man’s death Monday outside an east Yakima motel has been deemed a homicide, according to the Yakima County Coroner’s Office.

Anthony Carlos Rodriguez was killed by a single gunshot to the back, said Chief Deputy Coroner Marshall Slight, following a Thursday autopsy.

Rodriguez was fatally shot outside the Motel 6, 1010 Staff Sgt. Pendleton Way, around 3:25 p.m. Monday, according to Yakima police. Rodriguez died at the scene after saying he didn’t know who shot him, police Capt. Jay Seely said in an earlier interview.

Security video from the motel showed a car pass Rodriguez three times before he was shot, Seely said.

A YPD officer spotted the car outside Neighborhood Connections, 102 S. Naches Ave., around 3:30 a.m. Tuesday, Seely said, and the car was taken by police to be searched for evidence.

His death was the ninth homicide in Yakima County this year, and the third in the city.

Anyone with information on the case is asked to call Yakima police at 509-575-6200 or Yakima County Crime Stoppers at 800-248-9980. Tips can also be submitted online at http://www.crimestoppersyakco.org.

Alfred Anaya, 67, of Toppenish died Jan. 1 after he was hit in a head-on collision on U.S. Highway 97 near Wapato High School. Luberto Fernandez Rodriguez has been charged with first-degree murder in his death. The Washington State Patrol is investigating.

Charles Ellis Wade Mills, 45, of Yakima was fatally shot at his home in the 900 block of South 29th Avenue Jan. 27. Yakima police arrested his stepson, Jonathan A. Hidalgo, 18, who is awaiting trial on a second-degree murder charge in the case.

Victor J. Ramos, 28, was found shot in the 1200 block of Roosevelt Court in Sunnyside Jan. 31, and later died at Astria Sunnyside Hospital. Adrian Bueno, 28, and Francisco Rudy Gallardo, 41, have been charged in the killing. Sunnyside police are investigating.

Roger Harrington, 66, and Tyler Aalbu, 32, were found inside a burned home at 2210 S. Fifth Ave. in Union Gap following a March 28 fire. Union Gap police said the fire was deliberately set and the men died of smoke inhalation.

Tiana Lee Rain Cloud, 20, was killed in a shooting in the 3100 block of S. Wapato Road around 11 p.m. March 30. The FBI is investigating because the victim was a citizen of the Yakama Nation and the killing occurred within the Yakama Nation's reservation boundaries.

Caspar Garcia Villicana, 42, was found dead with multiple stab wounds in his home in the 1100 block of South 32nd Avenue May 1. Yakima police arrested Gilberto Guzman, 44, on suspicion of second-degree murder in the case.

Diana Calixtro, 27, of Yakima died May 8 after being shot outside a home in the 1100 block of South Fair Avenue. Russell Paul Whitefoot, 32, of Wapato has been charged with first-degree murder in the case. Yakima police are investigating.

Andre Terrence Harrell, 29, of Granger, was fatally shot in an apparent drive-by shooting at the intersection of Fourth Street and Bailey Avenue May 22. Yakima County Sheriff's Office and Granger police are investigating.

Marcus Lagmay, 32, of Wapato, was shot in the 100 block of Egan Road in the Wapato area. The FBI and Yakama Nation Tribal Police are investigating.

Jose Mendoza-Martinez, 38, was fatally shot after Yakima police said he broke into a home at the Almost Sunshine RV Park, 218. E. N St., June 24. Yakima County Prosecuting Attorney Joe Brusic found, after reviewing the Yakima police investigation, that the killing was an act of self-defense.

Jose De Rivera De La Cruz, 23, of Wapato was shot and killed outside the Valley Mall on Aug. 22. Union Gap police arrested Jonathan Edgar Navvaro, 26, who is charged with first-degree murder in the case.

Yolanda Cervera Tapia, 51, of Yakima was found strangled to death in her home Aug. 30. Yakima police have obtained a warrant for the arrest of her ex-boyfriend, David Rosales-Rosales, 50, on a second-degree murder charge.

Richard Hayden McFarland, 58, a transient was fatally stabbed in the 1300 block of North First Street Sept. 4.Justin Allen Stone, 30, is charged with second-degree murder in his death. Yakima police are investigating.

Todd William Kopinski, 49, of Selah was fatally shot Sept. 17 at a home in the 500 block of Irene Lane. Kerrie Ann Mathews, 51, was arrested in connection with his death, but was released pending further investigation. Yakima County Sheriff's Office is investigating.

Sonia Valenzuela, 18, of Toppenish was fatally shot Oct. 3 in the 200 block of North E. Street. Toppenish police are investigating.

Roy Richmond Land, 56, of Terrace Heights died Oct. 26 in Seattle  from injuries resulting from his being stabbed in his Terrace Heights home Aug. 30. The 15-year-old daughter of his girlfriend has been charged with second-degree murder. Yakima County Sheriff's Office is investigating.

Sebastian Suarez, 18, of Yakima was shot and killed Oct. 28 by two assailants at the intersection of West Nob Hill Boulevard and South 20th Avenue. Luis Daniel Valencia, 16, and a 14-year-old male are charged with second-degree murder in Suarez's death. Yakima police are investigating.

Jose "Joey" Cantu, 34, of Yakima, was shot to death in the 400 block of West Chestnut Avenue Oct. 30. Yakima police are investigating.

Feliciano Galvan-Morales, 32, of Yakima was found shot to death in an orchard in Parker Nov. 2. Yakima County Sheriff's Office is investigating.