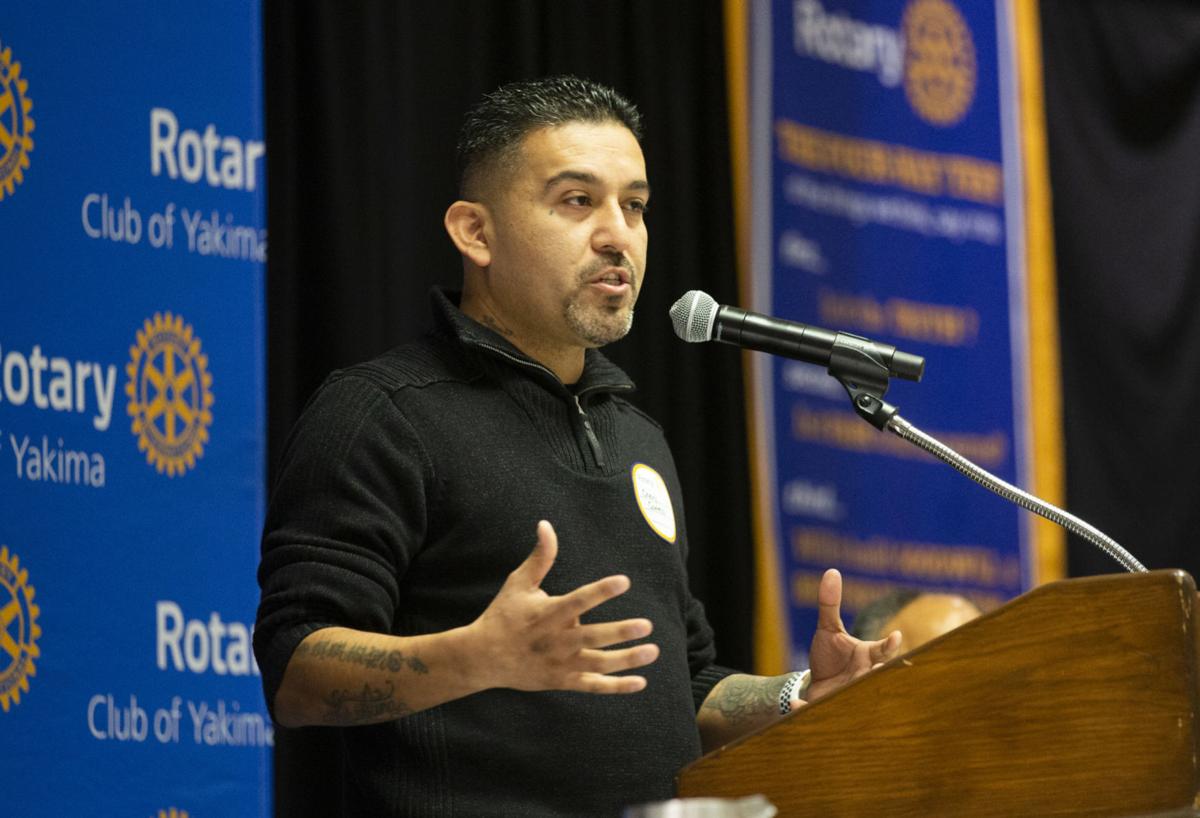 Chevy Cortez speaks to the Downtown Rotary Club about his time as a gang member and his organization The Love Project on Thursday, Jan. 2, 2019 at Yakima Convention Center in Yakima, Wash. 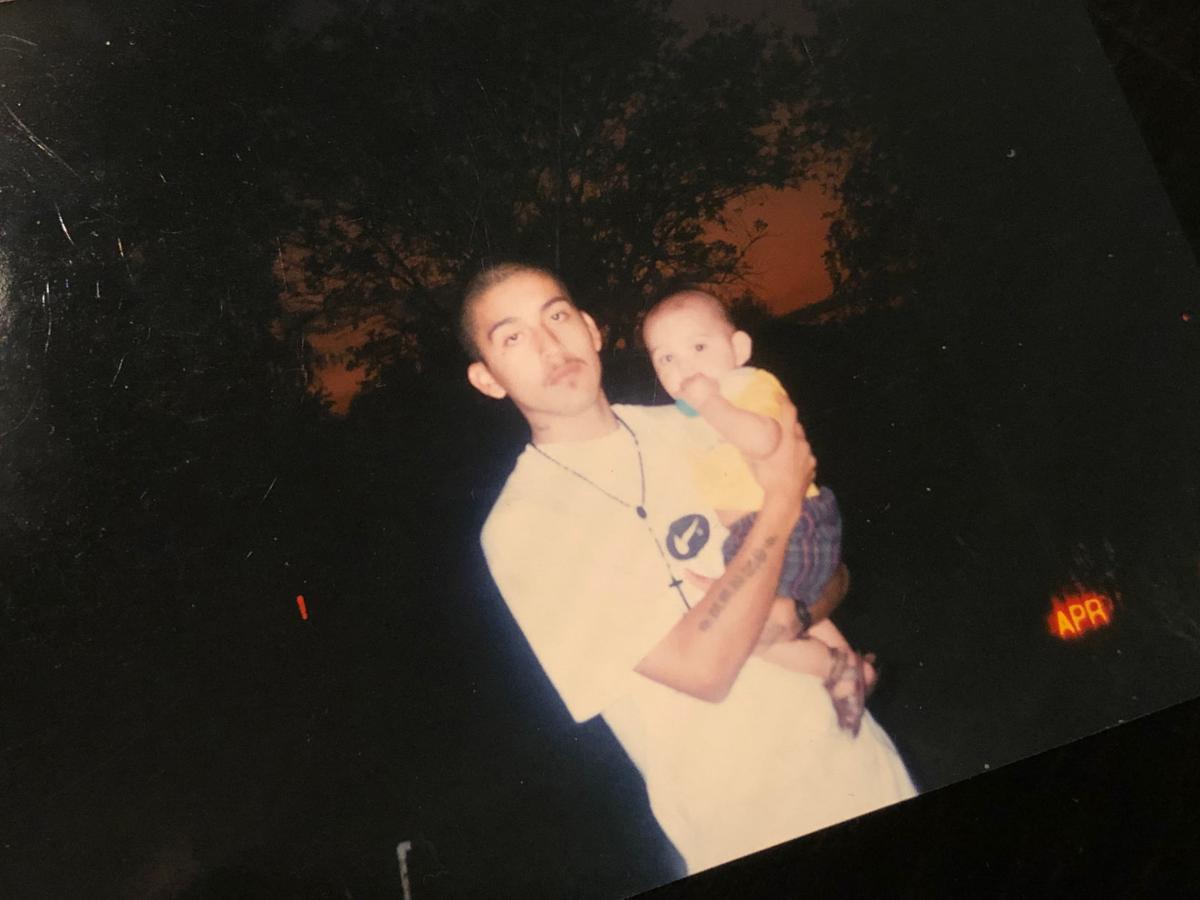 In this photo from 1995, Chevy Cortez holds his newborn son. 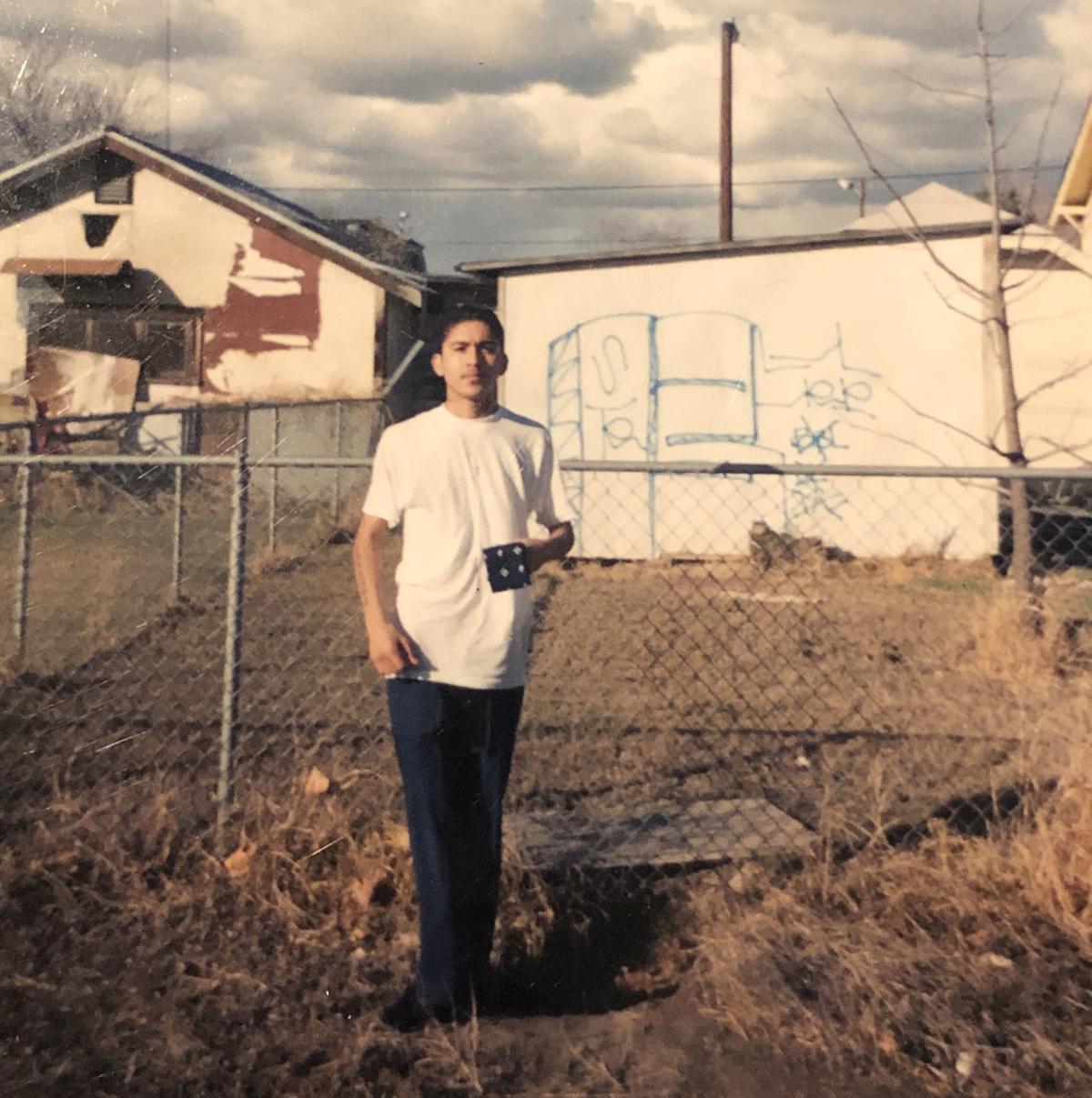 In this photo from 1993, Chevy Cortez, 15, stands in front of a gang tag he made in Sunnyside.

Chevy Cortez speaks to the Downtown Rotary Club about his time as a gang member and his organization The Love Project on Thursday, Jan. 2, 2019 at Yakima Convention Center in Yakima, Wash.

In this photo from 1995, Chevy Cortez holds his newborn son.

In this photo from 1993, Chevy Cortez, 15, stands in front of a gang tag he made in Sunnyside.

Every Sunday afternoon, more than a dozen young members and friends of the two largest gang groups in Yakima County come together to compete on a hardwood court.

Along with basketball, the middle and high school boys get food and friendly mentorship. They can come in their colors — red is associated with Norteño street gangs, blue with Sureño gangs — but organizer Chevy Cortez is absolutely clear about the rules.

“It’s a safe place. You can wear your colors; you just can’t disrespect” anyone, Cortez said. That means no physical or verbal confrontations, no loaded looks or gestures or words in these two hours. It also means being the bigger person and leading by example when newcomers want to bring the bluster.

Life de-escalates during the get-togethers held by The Love Project Yakima with two other organizations, In This Together and Triple R Ministries. From 2 to 4 p.m. every Sunday at Eisenhower High School or the downtown YMCA (the location this Sunday), kids can be kids. Just for a moment, Cortez said, they get to breathe.

“We’ve got dead guys on both sides and we’re just trying to keep you out of a casket,” he tells them.

The young men are reserved at first. They watch Cortez closely when he joins them in a game. They see the teardrop just below his right eye, three small dots clustered on his hand. On his right forearm, in squat Gothic letters, is the word that was his world for four years — Sureño.

Cortez calls the many tattoos on his arms, neck and face “the scars of life.” Those scars are like those of the boys who come to play basketball. Their stories resemble his growing up in Central Washington. They are why he founded The Love Project Yakima in 2017.

“There’s kids right now that want to get out. How do we help? Just by showing up,” Cortez said. “We’re just showing up. We’re going to be there for you.”

By being there, Cortez shows them life after gangs is possible. Others helped him when he left the Sureños as a new father at age 17. They supported him while he earned his GED, when he graduated from Perry Technical Institute in 2008 and channeled his creative talents into a career as a graphic designer. He founded his own side business, Chevy Cortez Designs, two years ago.

“I’m a product of people investing in my life,” he said.

In the years since, Cortez has worked to address the gang issue. He’s attended meetings and participated in gang reduction task forces with police and other experts. He has talked to Gov. Jay Inslee about gangs in and beyond Yakima.

The city and Yakima County have struggled for decades with the grip of drugs and gangs and all the violence they bring. Of the 27 homicides in the county in 2019, six were confirmed as gang-related. A gang member is accused of murdering a seventh person, whom police have said was not affiliated with a gang.

In another case, the county prosecutor declined to file charges against a young man who stabbed a gang member to death because an investigation showed it was self-defense.

A native of Texas, Cortez moved to Washington as a child with his family, who were migrant workers. He grew up in Pasco and Sunnyside before moving to Yakima. It bothers him that Yakima has been known for decades for drugs and gangs. Yakima is where he changed his future, and he wants to return the favor in the same way it came to him — on a personal level, with positive, supportive relationships.

“I wasn’t born here, but this is my city,” Cortez said. “I want to see my city turn around.”

Cortez talked about The Love Project Yakima at the regular Thursday meeting of Rotary Club of Yakima. Cortez said it’s the biggest group he’s spoken to, with average meeting attendance of 160.

The 41-year-old married father of five has a busy life. Along with his nearly 12-year role as graphic designer at King Beverage, his side business, the nonprofit he founded and his family, Cortez and wife, Kristina, are deeply involved with Heights Church in Terrace Heights.

In everything he does, Cortez hopes to help others. He and those involved with The Love Project Yakima and partnering organizations have connected with dozens of people who are struggling, but they don’t seek publicity for what they do. Some Rotarians who introduced themselves after Cortez spoke said they had never heard of his organization.

“That’s why you don’t see us on the news a lot. We’re behind the scenes,” Cortez said. “We’re really transparent about what we do, but we’re low-key.”

Most recently, volunteers gave out blankets, care packages and food to the homeless living in makeshift huts and fruit bins and tents in a Toppenish field known as The Compound.

“We just wanted to show up and love on them,” Cortez said of the visit just before Christmas. “We plan to go back. ... We want to do it in the summer.”

Sonia Rodriguez True, who introduced Cortez at the Rotary meeting, has worked with him through In This Together, which she founded with her husband, Pat. Cortez met the couple a few years ago.

“Our vision has been the same. We want to see change. It’s the right time,” Cortez said.

Sonia True stressed that again in mentioning the importance of supportive relationships in their collective efforts in gang intervention. “When you make that positive connection, it’s a great benefit,” she said.

She noted how Cortez grew up poor in a single-parent home. His family moved to the west side of Washington in 1987, when he was 9 years old, later relocating to Sunnyside and Pasco, where his mother raised him and two younger brothers after older siblings had left home.

Cortez attended school regularly and was good academically until middle school, when he began meeting others involved in gangs. He had been bullied, and the possibility of joining a group offering protection, reputation and respect was powerful incentive.

“I remember getting picked on because of my financial status. ... I’ve been fighting my whole life,” he said. “I was always looking for that one door that was open, and that door opened on a Friday night when I went to a gang party.”

He was 13. A few older gang members walked him home, stopping a block short so they could “jump” him in. Cortez had hung around with them long enough, they said. It was time for him to become one of them.

“I got beat up like a man for 30 seconds. I had bruises all over, but I was accepted now,” Cortez said.

Life was still difficult, though. He had a support system, but his fellow gang members weren’t there to help at home. Cortez had already decided he would change his life if he had children. In 1995, he learned he was going to be a father. That year, he moved to Yakima, leaving his gang life behind.

“Getting out is hard. You either get beat up” or even lose your life, Cortez said. He was willing to go through getting jumped out, he said, but in moving away also sent a message that he was done with gangs.

When he began taking GED classes at OIC of Washington, “I looked like a thug,” Cortez said. But his case manager and counselor, Sondra Pieti, was always rooting for him. She even let him borrow her car so he could get his driver license, he added.

“She believed in me,” Cortez said of Pieti, now with WorkSource Yakima.

Cortez also worked in OIC’s summer job program for a few years. He was pulling weeds one day when another man, heavily tattooed like himself and clearly a member of a rival gang, approached him with a flyer for Victory Outreach Church. Cortez reached out and accepted the paper from him.

Late on the morning of April 24, 2017, Kabin Smith was killed in a drive-by shooting near the corner of West King Street and Cornell Avenue. The 14-year-old, who lived in Union Gap, was walking home from school. He was wearing red clothing, according to court documents, which is associated with Norteño gangs.

Luis Alfredo Barrera, a known Sureño gang member, was charged with first-degree murder and is scheduled to face trial in March. Trial for the alleged driver, Jeremiah Luciano Peralez, is also set for March.

Smith’s murder prompted Cortez to found The Love Project Yakima. “That was it. Enough is enough,” he said. “I just wanted to help. .... Our city needs to be loved on.”

He envisioned bringing the community together regardless of race, religion or circumstance.

Early in the fall of 2017, volunteers with The Love Project Yakima completed their first outreach. With $400 raised by the sale of T-shirts, they visited Camp Hope with towels, sleeping bags and $200 worth of gas cards. Also that year, they bought a teen client of Rod’s House a $100 gift card to an auto parts store and paid for a tuneup for his car.

Seemingly small efforts, such steps can change lives. Cortez isn’t big on spending time plowing through bureaucratic red tape and paperwork needed for big grants. He continues to raise funds through T-shirt and sweatshirt sales and private donations, some of which come through www.theloveprojectyakima.org. Sponsorships also help him spread his message and help those who need it most.

Along with the Sunday basketball games, which Cortez stressed are open to others as well, he and others visit with a few students every week, at Eisenhower on Thursday and Washington Middle on Wednesday. They eat lunch with them, listen to them.

You can be somebody in life, Cortez tells them.

“My kids are older now. I’m at the point in my life where I get to invest in other kids,” he said.

TOPPENISH — Pending a vote by the Toppenish City Council on Monday, two local organizations plan to open a vacant building as a winter shelter…