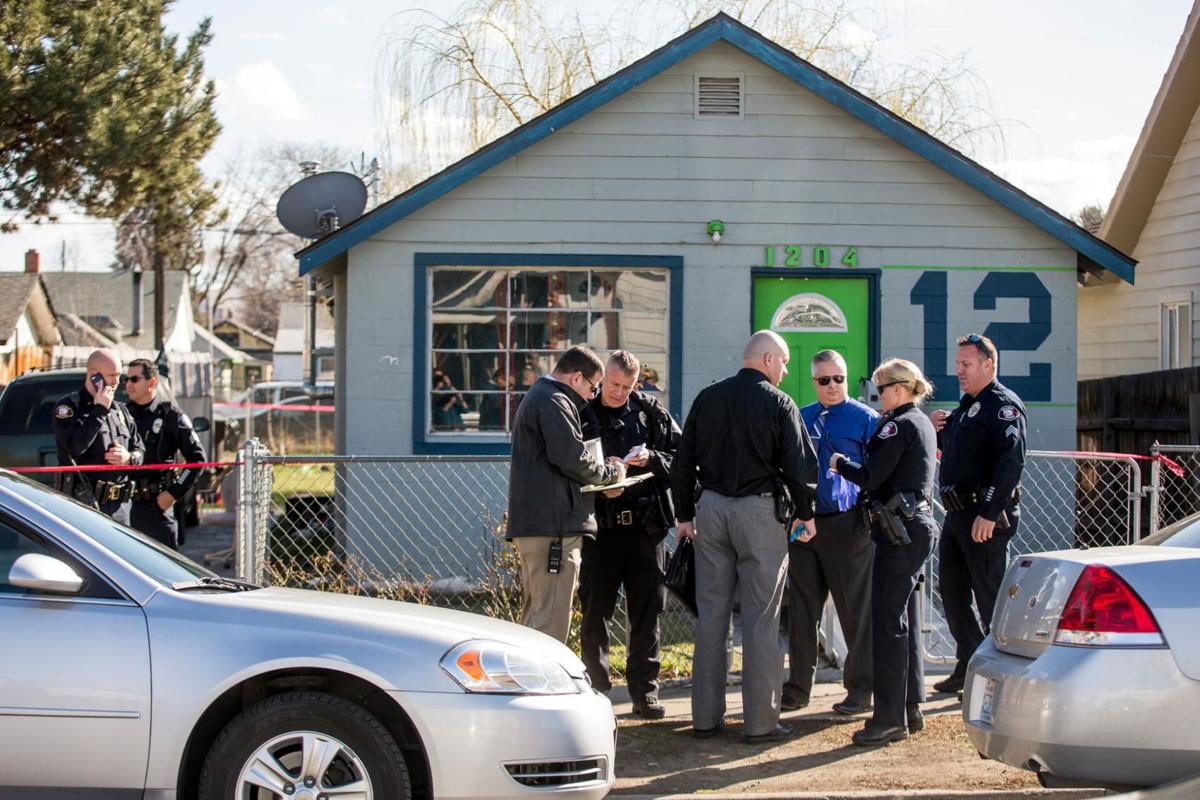 Police officers and detectives investigate a homicide in March 2018 at a home in the 1200 block of Cherry Avenue in Yakima. It was one of 16 homicides Yakima recorded in 2018, according to an FBI report.

Police officers and detectives investigate a homicide in March 2018 at a home in the 1200 block of Cherry Avenue in Yakima. It was one of 16 homicides Yakima recorded in 2018, according to an FBI report.

While homicides were up, violent crime decreased by nearly a third last year in Yakima, according to crime statistics compiled by the FBI.

Yakima police recorded 421 cases of violent crime in 2018, according to the FBI’s Crime in the United States report. In comparison, there were 593 violent crimes investigated by the YPD in 2017.

Even though violent crime dropped overall by 29 percent from 2017, Yakima homicides increased from 13 to 16, according to the FBI — a climb of 23 percent.

The report, which was recently released, is a compilation of crime statistics provided by police agencies.

Last year was Yakima’s worst year for homicides in nearly 40 years, according to the Washington Association of Sheriffs and Police Chiefs’ records. However, the statistics do not count three killings that were deemed self-defense by prosecutors.

On April 22, 2018, Chase Roberts, 24, and Brian Perez, 31, were stabbed to death during an attempted home-invasion robbery by the occupants of a West Valley home.

On Nov. 5, 2018, Tiffany LeAnne Roberts was fatally shot in her North Third Street apartment. Prosecutors declined to file charges against Roberts’ accused shooter — her 87-year-old grandmother, Wanda Lee Roberts — noting the difficulty of overcoming the elder Roberts’ assertion that she shot her granddaughter in self-defense.

Of the city’s 16 homicides, FBI statistics show firearms were used in all but four, which were stabbings.

Among the 481 cities nationwide of comparable size, Yakima’s homicide rate was the 11th highest.

But Yakima Police Chief Matt Murray said that, combined with 2019 data, the FBI’s numbers show a trend. He points to aggravated assault as an important measure.

That number is continuing to decline, he said, with 177 reported cases to date.

“Homicide can be how far were you from the doctor, how good a shot was someone,” Murray said. “Aggravated assault is a better indicator.”

And, Murray said, the current data shows that five aggravated assault cases this year were related to gang activity, while 77 were linked to domestic violence.

“It flies in the face of the argument that you can’t go downtown because of the gangs,” Murray said. “If we are going to talk about violent crime in Yakima, maybe we need to talk about what’s happening inside our homes.”

In addition to a decline in violent crimes, property crimes also decreased by about 25 percent from 2017, according to the report, from 4,306 to 3,343. The only category that showed an increase was arson, which went from 15 to 23, a 53 percent increase.

In the biggest arson case of the year, a pair of fires caused more than $20 million damage to Fruit Packers Supply in August 2018. That fire remains under investigation by the U.S. Bureau of Alcohol, Tobacco, Firearms and Explosives.

Coming from a family with three generations of domestic violence, LaNora Charley thought it was normal behavior. Finally, she decided in 2015 …

Interactive: Crime rates in your town?