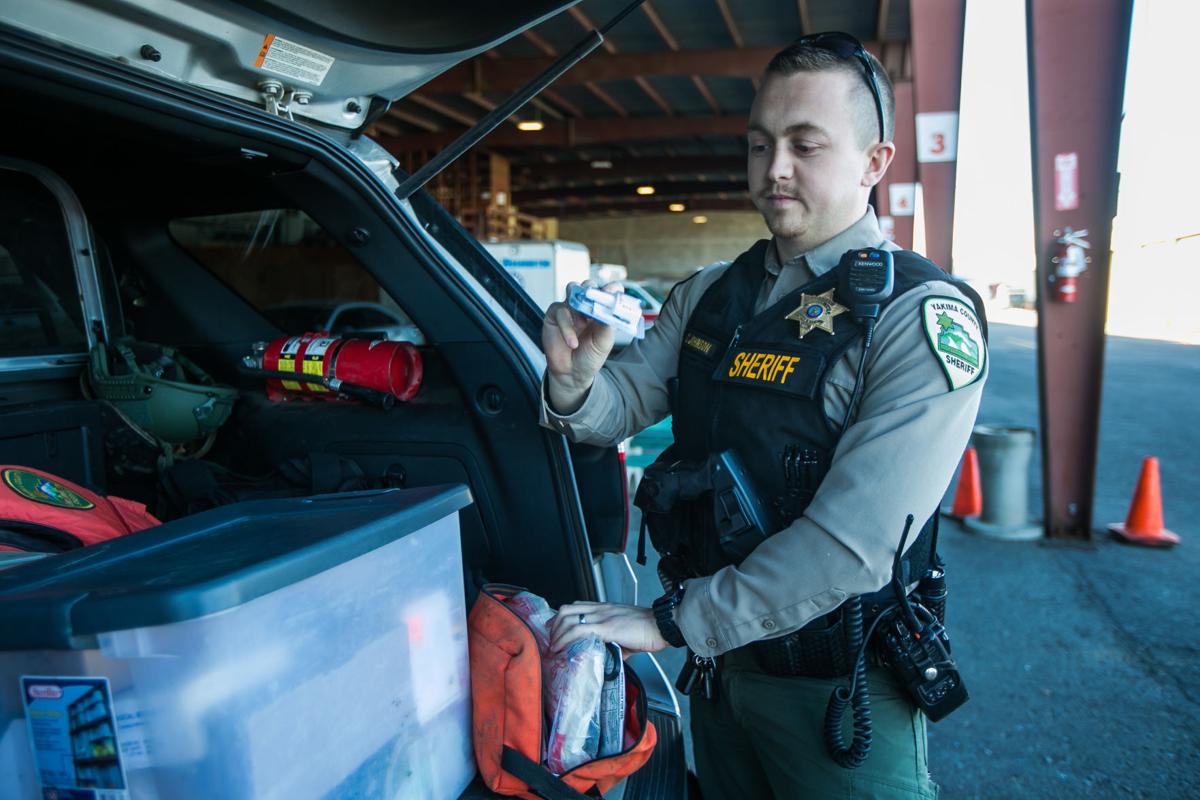 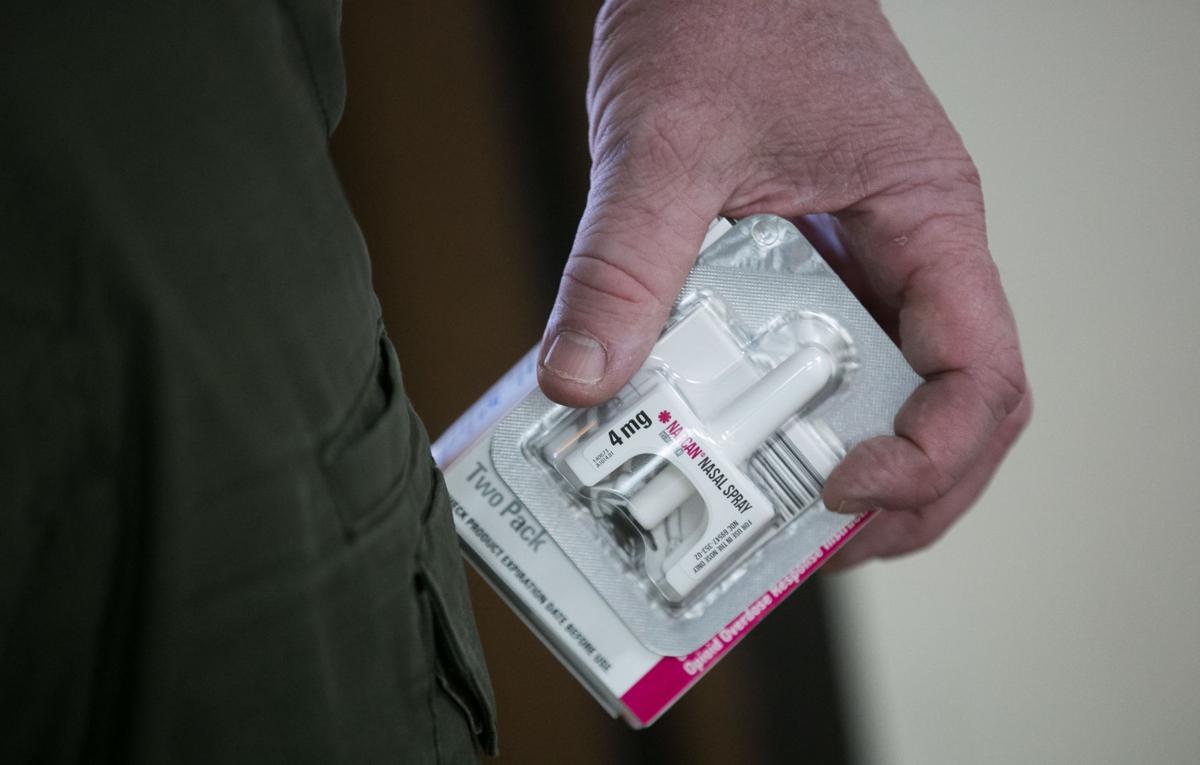 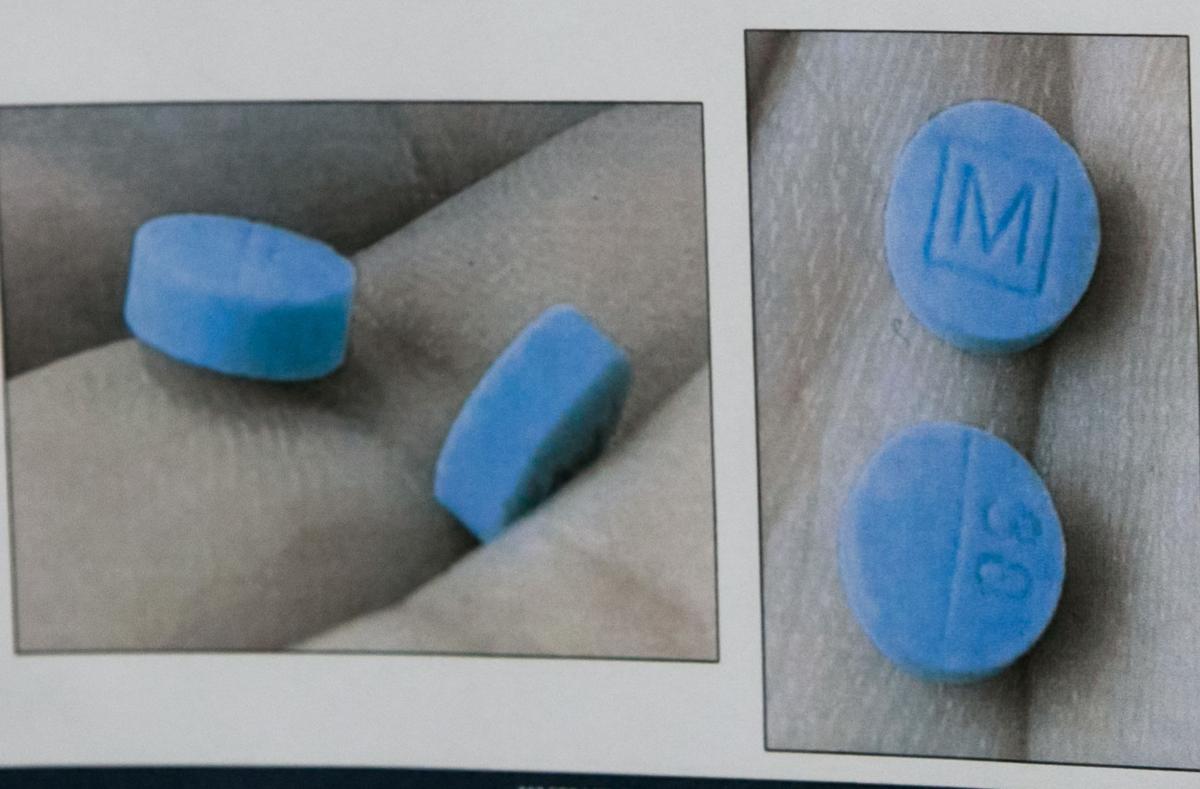 Yakima County Deputy Caleb Johnson responded to a recent call that’s becoming all too familiar — a man who appeared to have overdosed was unresponsive.

Johnson arrived and found the man in an upstairs bedroom. He wasn’t breathing. Johnson quickly pulled out a dose of Narcan, shoved the spray nozzle into the man’s nostril and gave the device two pumps.

“In minutes, he was up and walking around,” Johnson said. “It’s an extremely quick turnaround.”

Not everyone is lucky enough to get a blast of Narcan — the drug that can reverse an overdose — before it’s too late.

The trend appears to be continuing, with 13 overdose deaths in January alone and one in February, Coroner Jim Curtice said.

The leading cause is fentanyl, a synthetic opioid that’s found in pills that have been hitting the streets here for the past several years, he said.

Curtice said the counterfeit pills are made to resemble pharmaceutical Percocet 30s, and people are buying them.

“They may think they’re getting pharmaceutical grade but it’s not — it’s counterfeit,” he said.

There’s no telling what’s in those counterfeit pills, but one thing is certain — they’re killing people, Curtice said.

Lab results have found some pills containing 10 times the amount of a lethal dose, he said.

Overdose victims have been found slumped over in cars, in offices and at their homes, Curtice said.

The victims’ demographics are all over the board, ranging from ages 14 to 60, and from homeless people to professionals, he said.

“It’s crazy and it’s all over the county,” Curtice said.

On Friday, the Yakima Health District issued a public warning after hospital data revealed a potential opioid cluster in the county.

Sheriff’s Office deputies have been carrying Narcan since 2018.

Initially, the office obtained the overdose-reversing drug to protect deputies who may come in contact with fentanyl while responding to a call, said Lt. Aaron Wuitschick.

“Now the guys use it on the public,” he said.

Narcan is packaged in a device similar to a nasal spray, with a push-pump at its bottom.

The office has not been tracking the number of times deputies administer Narcan, but plans to start doing so, Wuitschick said.

Some attribute recent spikes in overdose deaths to the COVID-19 pandemic.

People undergoing substance abuse treatment haven’t been able to meet in groups because of Gov. Jay Inslee’s Stay Home, Stay Safe order intended to slow the spread of the virus.

As a result, some people in recovery fell into isolation and picked up drugs again, said Theresa Adkison, Chief Strategy Officer with Triumph Treatment Services.

She said she knew two people who died of overdoses last year and one from suicide.

“It’s definitely impacted a lot of people,” she said. “It’s really sad. It’s really hard to put it into words how scary it’s been."

That’s not just happening here. The Centers for Disease Control said the nation saw more than 81,000 overdose deaths over a 12-month period that endedin May 2020 — the highest ever over a year.

Not being allowed to meet in groups is hardest on those new to recovery, said Adkison, who also is in recovery.

“It’s really hard to be in recovery right now, especially for people who are new,” she said. “I can’t imagine what that might be like for them. I remember that first year and that first year the only time I felt safe was in a meeting.”

She said some small groups have met in garages and other places in defiance of the governor’s order just to have some in-person contact focused on recovery.

“It’s amazing how resourceful people have become — I find a lot of hope in it,” Adkison said.

Now groups of five will be able to meet now that the county has moved into Phase 2 of the state’s reopening plan.

People use various ways of getting high on opioids and their synthetic counterparts — they pop pills, smoke it or inject it, Adkison said.

“The problem with fentanyl is it’s just so powerful, it kills people,” she said.

Wuitschick said you don’t know what you’re getting when you buy pills on the street.

“There’s no telling what stuff is in them,” he said. “There’s no regulation of the street drug.”

Curtice said sometimes users are found dead of overdoses with the foil and tube they used to smoke the drug with still in their hands — that’s how fast they die.

“It’s not like they did it, put the stuff down and died,” he said. “It’s pretty fatal stuff. They collapse and become unconscious.”

Many users have Narcan on hand but are unable to self-administer it because fentanyl hits hard and fast, Curtice said.

Synthetic opioids depress the respiratory drive, causing a person to lose consciousness and depriving the brain of oxygen. Loss of oxygen after 4 minutes begins to cause brain damage, Curtice said.

Johnson said heroin and synthetic opioids such as fentanyl are often found at schools, and parents need to be quick to identify foil or smoking straws.

He pointed to one call when parents had no idea what their child was doing with foil and straw until they found him unresponsive in his room one day.

“The parents saw the foil and straw but didn’t know it was,” Johnson said.

The Yakima Health District's website provides a list of more than a dozen substance abuse treatment programs. You can find it here: