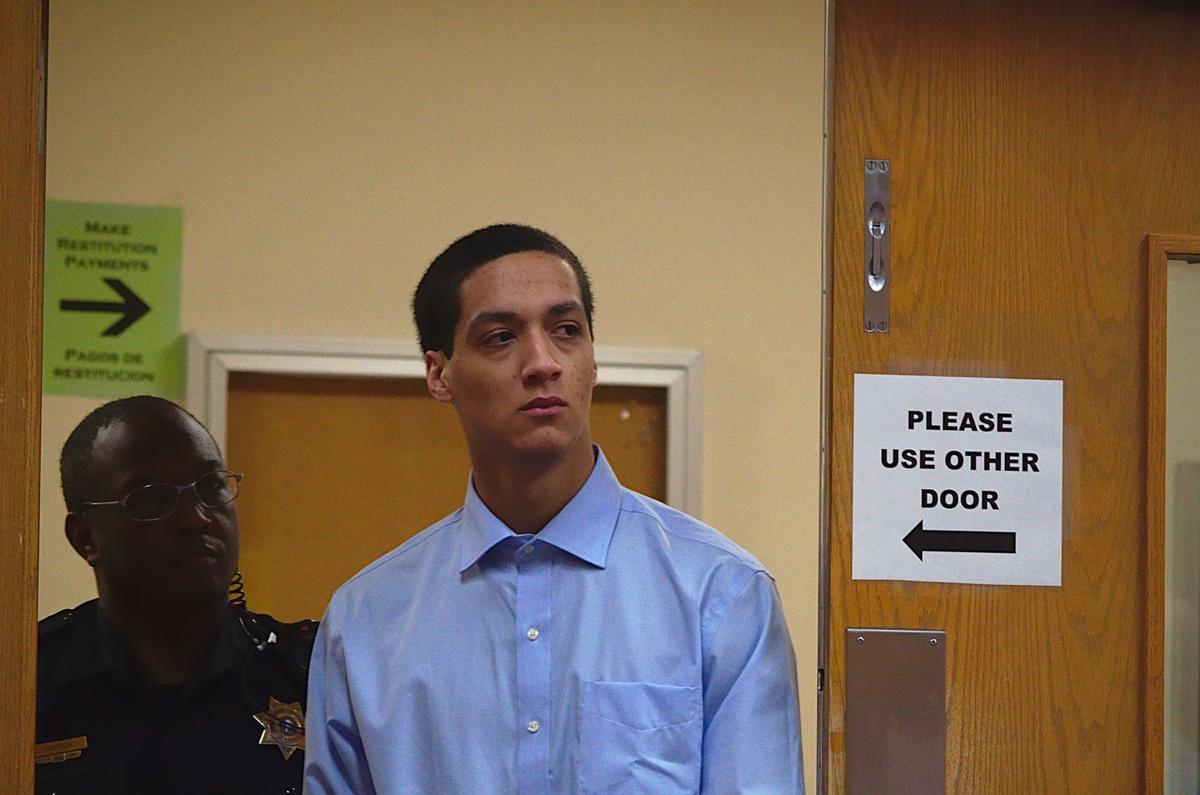 FILE — Cameron Jay Helland enters Yakima County Superior Court Thursday, Jan. 9, 2020, for his trial on a second-degree murder charge in the death of 16-year-old Davontae Mesa at a West Valley park in 2018. 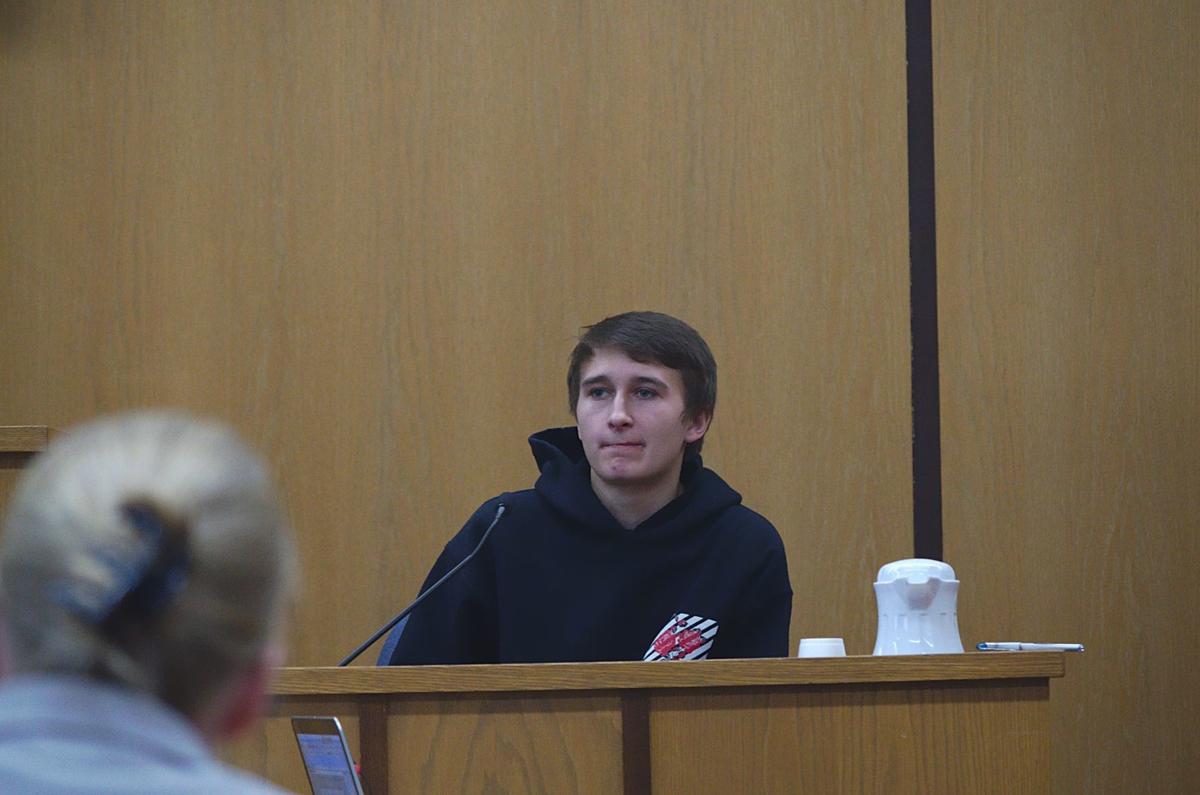 Aaron Updyke testifies in Yakima County Superior Court during the murder trial of Cameron Jay Helland Thursday, Jan. 9, 2020. Updyke testified he was with Davontae Mesa, 16, when he was fatally shot at a West Valley park Nov. 23, 2018. (Donald W. Meyers/Yakima Herald-Republic) 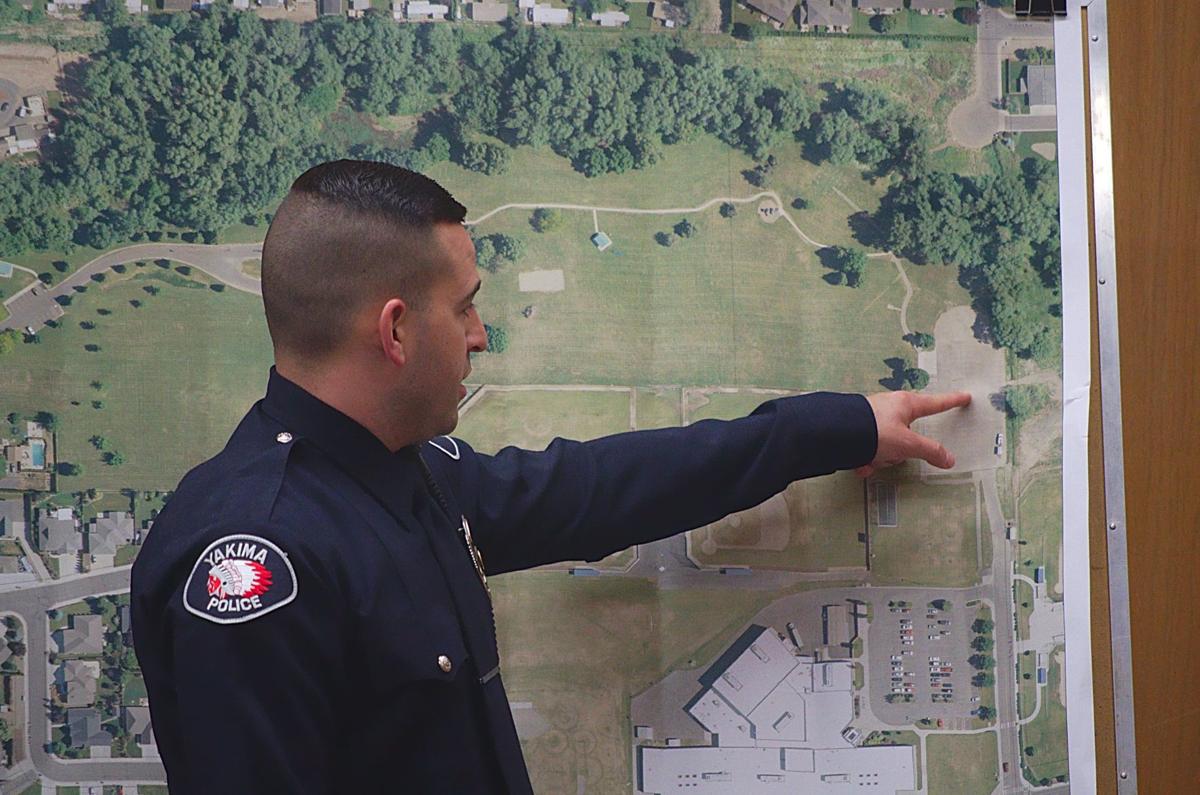 FILE — Cameron Jay Helland enters Yakima County Superior Court Thursday, Jan. 9, 2020, for his trial on a second-degree murder charge in the death of 16-year-old Davontae Mesa at a West Valley park in 2018.

Aaron Updyke testifies in Yakima County Superior Court during the murder trial of Cameron Jay Helland Thursday, Jan. 9, 2020. Updyke testified he was with Davontae Mesa, 16, when he was fatally shot at a West Valley park Nov. 23, 2018. (Donald W. Meyers/Yakima Herald-Republic)

Prosecutors and defense attorneys in their opening statements agreed Thursday that Cameron Jay Helland shot a 16-year-old boy at a West Valley park the day after Thanksgiving in 2018.

But, in their opening statements, attorneys said the question before a Yakima County Superior Court jury is whether Helland murdered Davontae Mesa or killed him in an act of self-defense in an attempted robbery during a drug deal on a foggy night.

“The evidence is going to show you five young men, none making good decisions, drug activity, a gun and a dead 16-year-old,” Deputy Prosecuting Attorney Nicholas Barrett told jurors. “But it is not going to show self-defense.”

Ulvar Klein, Helland’s attorney, disagreed, saying the evidence will demonstrate that Helland was fighting for his life in his car at West Valley Community Park, where another person was fatally shot months earlier.

“Everyone is going to agree this was a tragedy that a 16-year-old died,” Klein said. “But it was not a crime.”

Helland, 19, is charged with second-degree murder and possession of a firearm by a minor in connection with Mesa’s death Nov. 23, 2018.

Both attorneys said Mesa and three companions had spent the day driving up to Cowiche Canyon and hanging out in different West Valley areas drinking beer, smoking marijuana and snorting counterfeit Percocet pills laced with fentanyl.

When they ran out of marijuana, Mesa contacted Helland through Snapchat, a phone app that destroys messages shortly after they are read, to buy more.

After arriving at the park, Mesa and Aaron Updyke, one of his companions, got in Helland’s car, with Mesa sitting behind Helland and Updyke in the front seat next to him. Mesa and Helland got into an argument, the attorneys said.

In his opening statements, Barrett characterized the argument as a “beef” and “drama” between the men that ended with Helland firing one shot into Mesa’s shoulder just before Mesa stumbled out of the car, his reflexes impaired by the fentanyl. Then, Barrett said, Helland proceeded to fire six more rounds, emptying the clip on his 9-mm semi-

The bullets left Mesa with eight wounds, as one bullet passed through Mesa’s chest and struck his leg, Barrett said.

But Klein told jurors that evidence, including Helland’s testimony later in the trial, will demonstrate that Mesa and his friends had planned to rob Helland, and Mesa was wrestling and choking Helland.

“It was (Helland) pulling the trigger as fast as he could because he was afraid, and wanted to live,” Klein said. Helland was given the gun by his mother to protect himself in what Klein said was a “dangerous” city, pointing to a fatal shooting at the same park months earlier.

On July 19, 2018, Eduardo Rodriguez-Castaneda was found shot to death inside his pickup in the same parking lot. David Paul Ortega Jr., 19, is awaiting trial on a second- degree murder charge in that case.

Helland left the scene and, after abandoning his car at a gas station, returned to the crime scene and surrendered to a Yakima County sheriff’s deputy, Barrett and Klein said.

Updyke, whose testimony took up most of the Thursday afternoon session of the trial, said when they got in the car, Mesa asked to see the bag of marijuana that Helland had, and the men got into a tug-of-war with the plastic bag.

At that point, Updyke said he got out of the car because he did not want to be involved in the fight, testifying that Mesa had accused Helland of taking a vape pen from him earlier.

“Davontae said (Helland) took stuff from him. He didn’t say anything about robbing him, but he wanted to get him back,” Updyke testified.

Mesa got out of the car and Helland began shooting him between the two vehicles before driving away, Updyke testified.

When questioned by Klein, Updyke said he encouraged one of his friends calling 911 to say they found Mesa’s body in the parking lot because they didn’t want to get in trouble, as well as not “snitch” on Helland.

Before Yakima police Officer Mario Vela arrived on the scene, Updyke said he and one of the others hid their beer and marijuana in the park.

Vela testified that when he arrived, the three were standing around Mesa, who was lying on his side. Vela’s dashboard camera video showed him performing CPR on Mesa until another officer arrived and relieved him.

The video caused a woman in the courtroom to leave in tears.