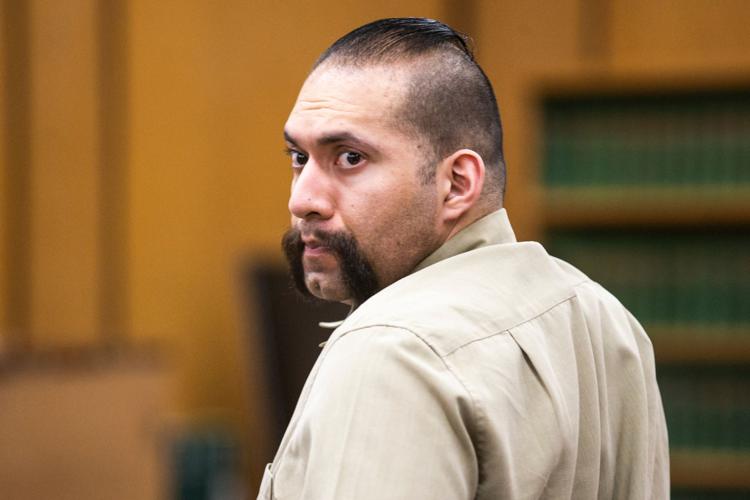 Santiago Santos appears in a Yakima County Superior courtroom for the closing arguments of his murder trial on Friday, April 27, 2018.

Manuel Enrique Verduzco Jr., of Selah, appears in Yakima County Superior Court in Yakima, Wash. on Tuesday, April 3, 2018. The 28-year-old is charged with aggravated first-degree murder in the March 2016 shooting deaths of 27-year-old Karina Morales-Rodriguez and 30-year-old Marta Martinez at a MoneyTree store in Yakima.

Santiago Santos appears in a Yakima County Superior courtroom for the closing arguments of his murder trial on Friday, April 27, 2018.

Manuel Enrique Verduzco Jr., of Selah, appears in Yakima County Superior Court in Yakima, Wash. on Tuesday, April 3, 2018. The 28-year-old is charged with aggravated first-degree murder in the March 2016 shooting deaths of 27-year-old Karina Morales-Rodriguez and 30-year-old Marta Martinez at a MoneyTree store in Yakima.

YAKIMA, Wash. — Despite their attorneys arguing that they suffer from mental illness, Manuel Enrique Verduzco Jr. and Santiago Santos were sentenced to prison at the conclusion of two recent high-profile murder trials in Yakima.

That’s contrary to claims that the men could not be convicted because the killings for which they were ultimately found guilty were the result of psychotic episodes.

Verduzco was convicted of first-degree murder in the killing of two women outside a downtown Yakima payday lending store two years ago. And a jury determined Santos was guilty of felony murder for stabbing a Grandview man 59 times in 2014.

The guilty verdicts weren’t unusual: Insanity defenses are argued in less than 1 percent of all trials — and studies show only one-quarter of those are successful.

Here are six things to consider about how mental health issues are handled in the state court system.

The defense strategies for Verduzco and Santos were not the same.

Verduzco’s attorney asked the jury to find him not guilty by reason of insanity, meaning Verduzco didn’t understand that his actions would lead to the women’s deaths and/or he didn’t realize the killings were illegal, said Brian Aaron, a Yakima County deputy prosecuting attorney.

Santos’ attorney argued he didn’t have the mental ability at the time of the crime to form the intent to kill.

In other words, Santos’ purported mental illness meant he didn’t mean to kill his victim. In a first- or second-degree murder charge, the prosecutor is expected to prove the defendant intended to kill.

The defense of a diminished mental capacity often still leads to a conviction but could mean a jury convicts someone of second-degree murder or manslaughter instead of first-degree murder, said county Deputy Prosecuting Attorney Ken Ramm.

Mental illness may not make sense to someone who doesn’t have it, but as the punishments for first- and second-degree murder vary based on intent, so do convictions based on mental state.

Being found not guilty by reason of insanity doesn’t mean someone walks free.

When someone is found not guilty by reason of insanity, they’re required to be taken to a mental institution and evaluated, said University of Washington law professor Helen Anderson.

The person can be kept in an institution as long as the maximum prison sentence they could have received. But the law requires someone to be re-evaluated and, if they’re no longer a danger to themselves or the public, released.

“I think sometimes the public thinks it’s easy to plead insanity and get off,” she said. “But it’s actually very difficult. You don’t just get to walk free.”

The designation of insanity or diminished capacity is another way of determining whether someone should be held accountable for an action.

“Generally, our legal tradition has been that your state of mind is important for how guilty you are,” Anderson said.

A person who means to kill someone often faces harsher punishment than someone who accidentally or negligently kills someone.

“So there’s a sense of someone who’s not completely there; they’re not as blameworthy as someone who knew what they were doing,” Anderson said.

Everyone is presumed sane.

Just as the court says an individual is innocent until proved guilty, they’re considered sane until proved otherwise.

Therefore, when a defense team decides to use an insanity argument, it’s up to them to prove the defendant is not sane.

The defense has to notify the court it’s planning to raise an insanity defense.

The law says that within 10 days of a defendant being formally charged — usually two weeks after the first court appearance — the defense has to tell the court if it’s raising an insanity defense.

Aaron said the defense isn’t usually sure at that point and will sometimes raise it as a precaution. As the case progresses, the defense will have doctors evaluate the defendant and sometimes will raise the insanity defense for real.

That gives the prosecution time to have its own doctors conduct an evaluation of the defendant and learn the specifics of the mental illness instead of just creating a case to prove the person did the crime.

The prosecutor can question whether certain medical evidence can be presented based on what the scientific community accepts.

Either party can question evidence in any case. But it takes on a new significance in trials where insanity is argued, because the trial itself often becomes a battle of doctors.

Allowing scrutiny of medical evidence means the defense likely can’t bring in an unqualified medical practitioner and have that testimony weighted the same as a seasoned psychiatrist.

YAKIMA, Wash. — After hearing more than a dozen tearful pleas for justice and mercy, a Yakim…

After calling it the worst case he’s seen in nearly four decades in law, a Yakima County Sup…