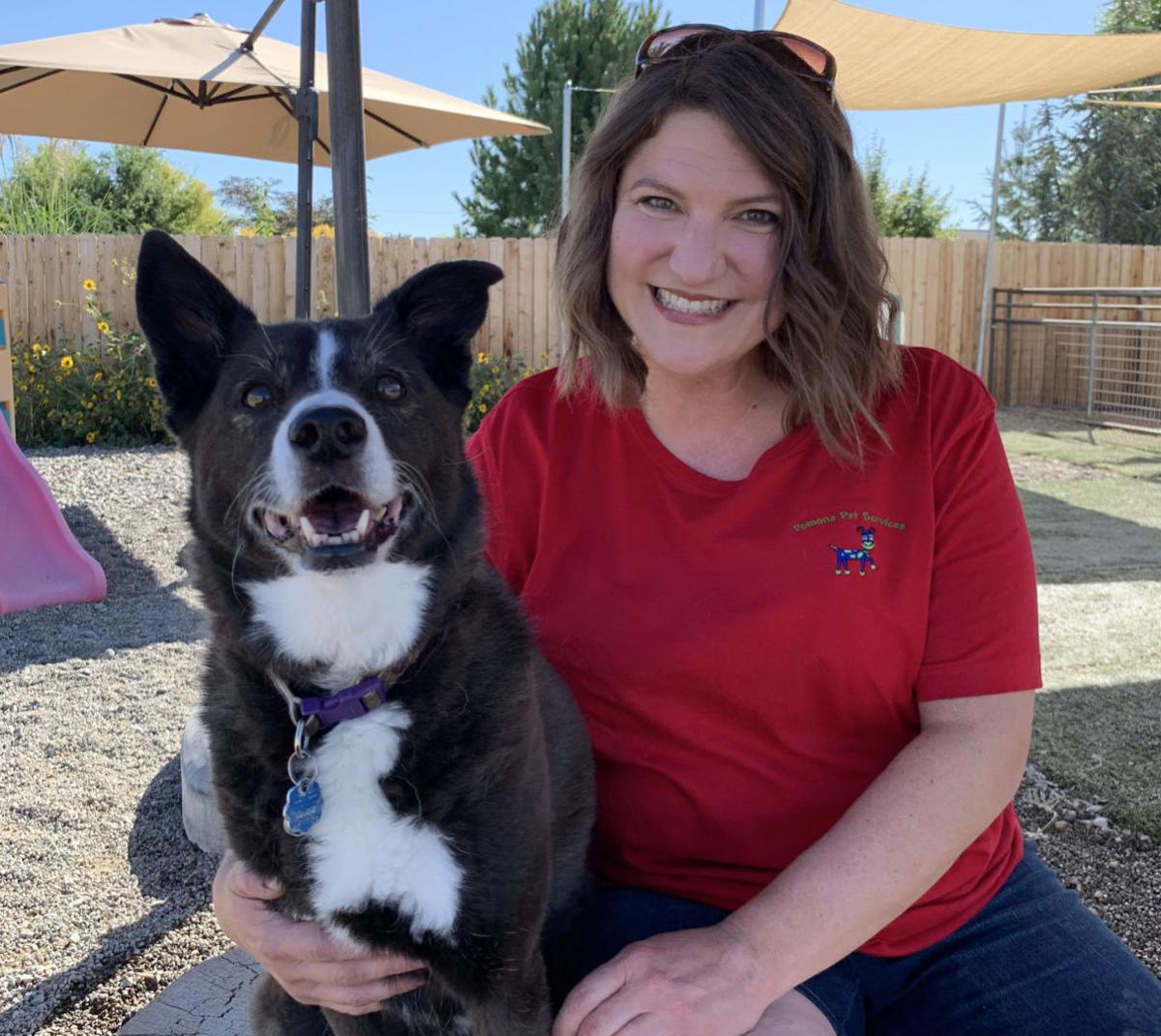 Tracy Anderson and her dog, Olive, enjoying the shade under a canopy at Pomona Pet Services on a hot day. 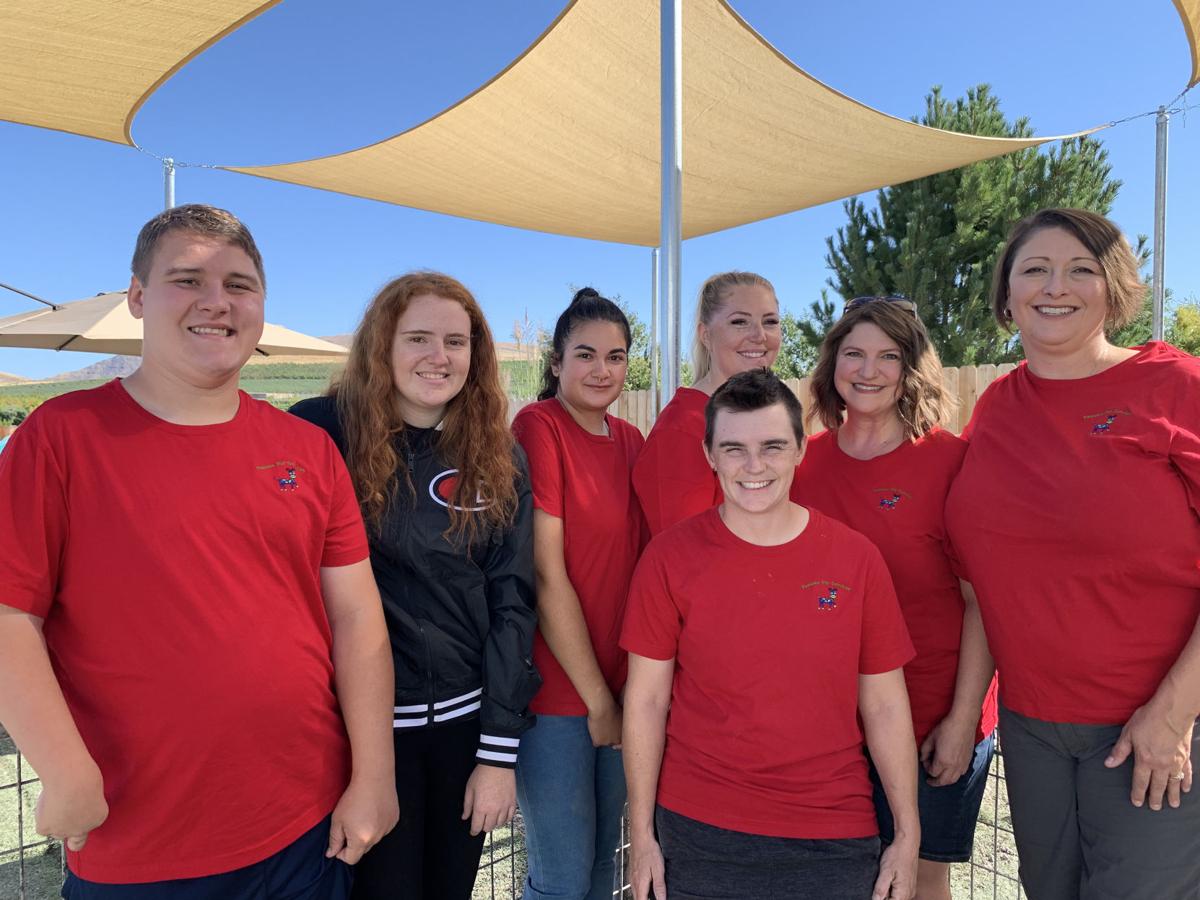 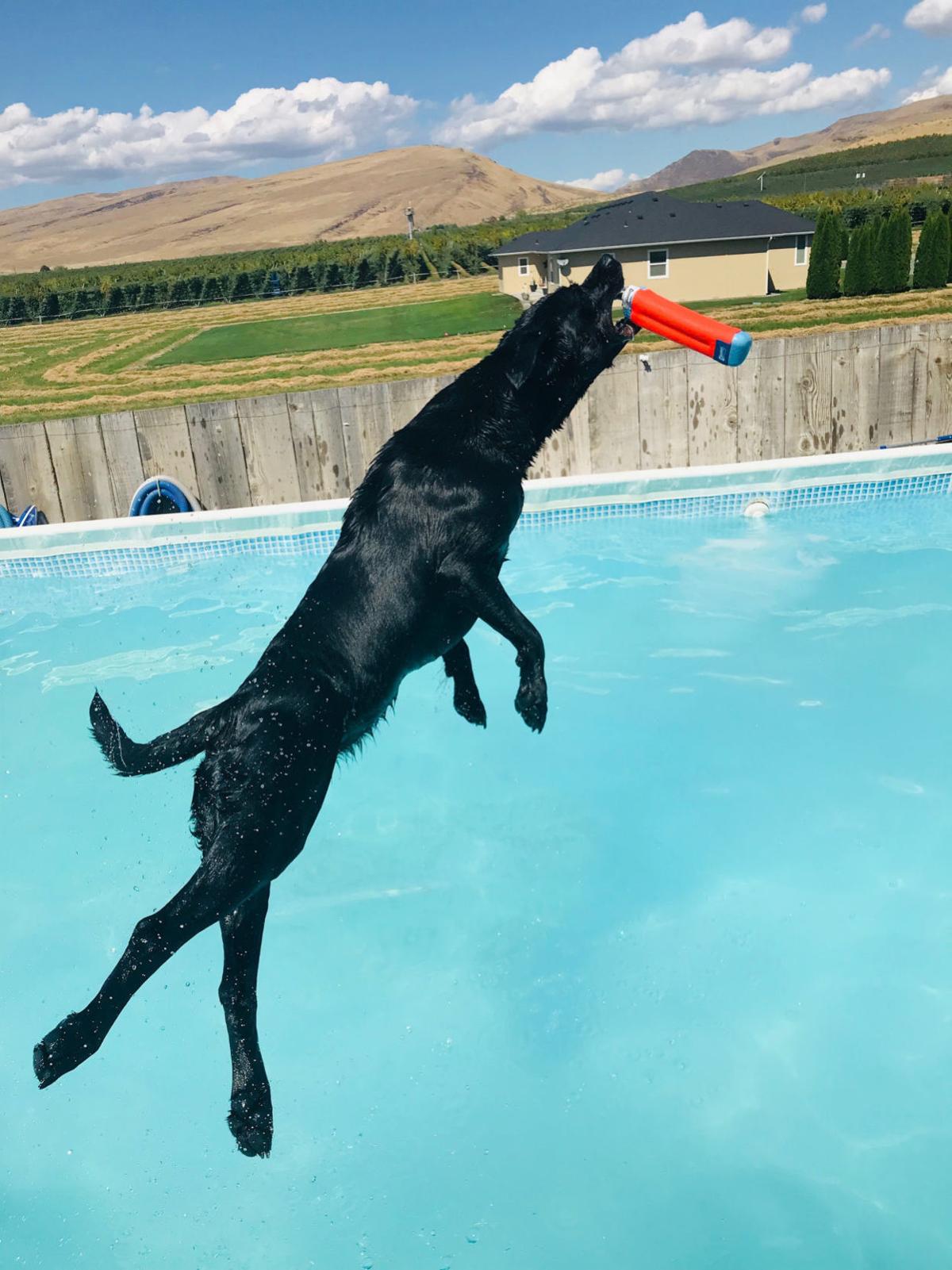 Black Lab Molly leaps for a toy as she jumps into the pool. 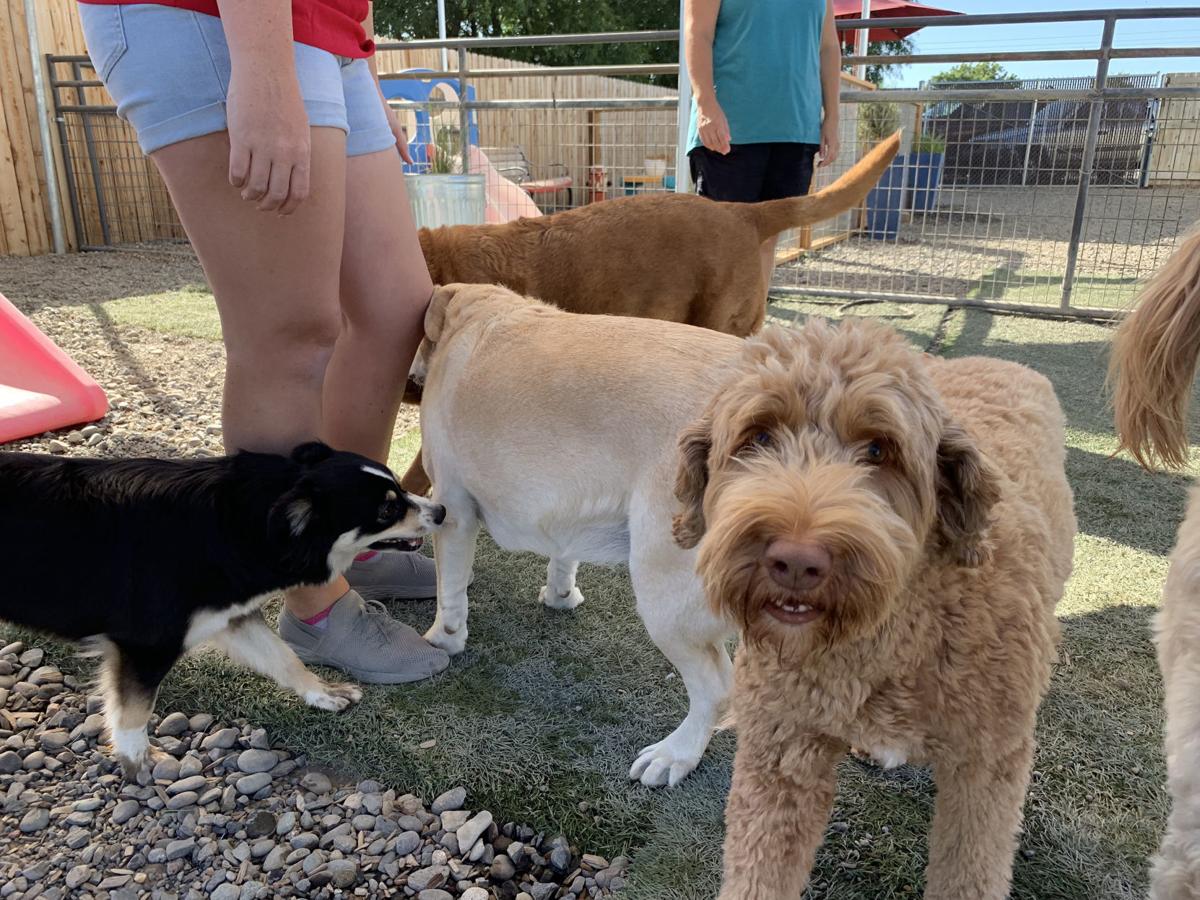 Every day’s a dog party at Pomona Pet! 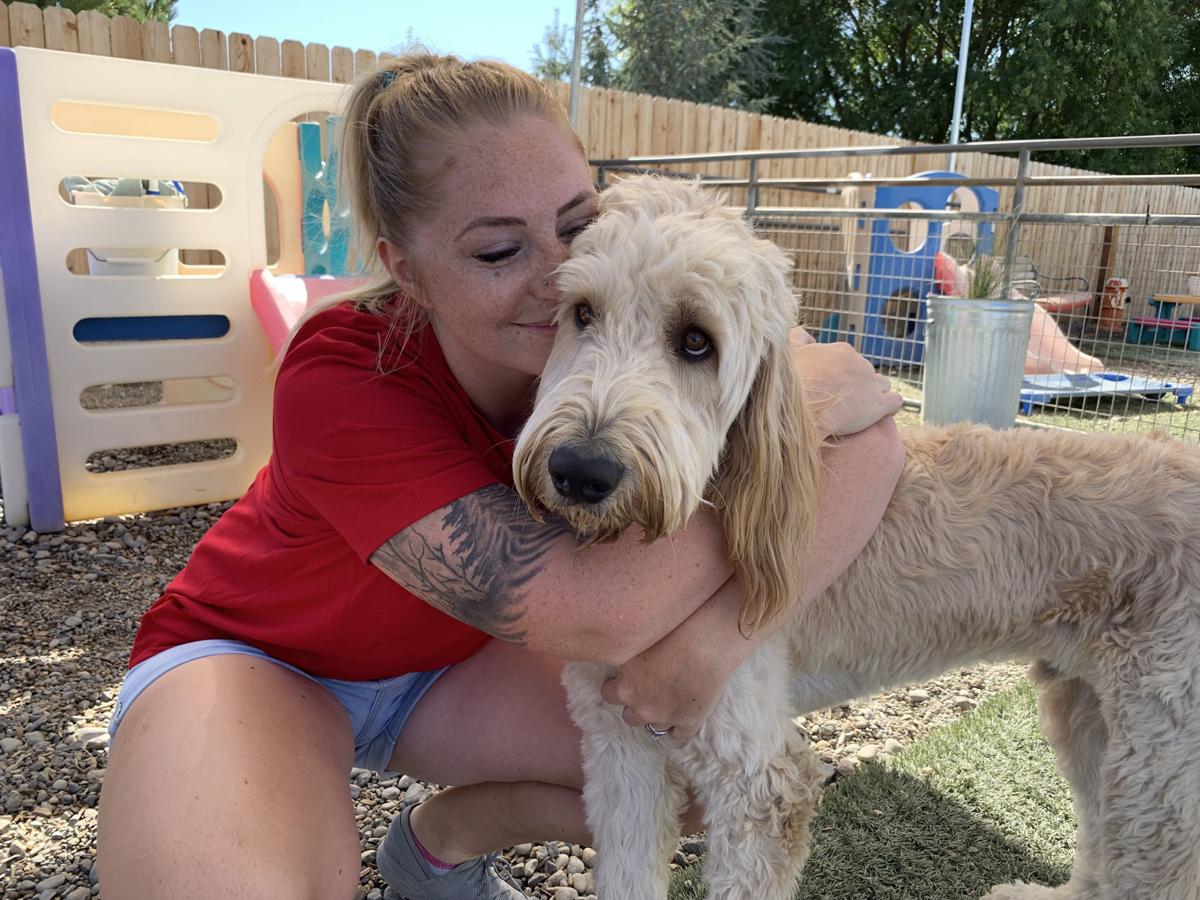 BreAnna hugs a furry client. The workers at Pomona treat the dogs as they would their own. 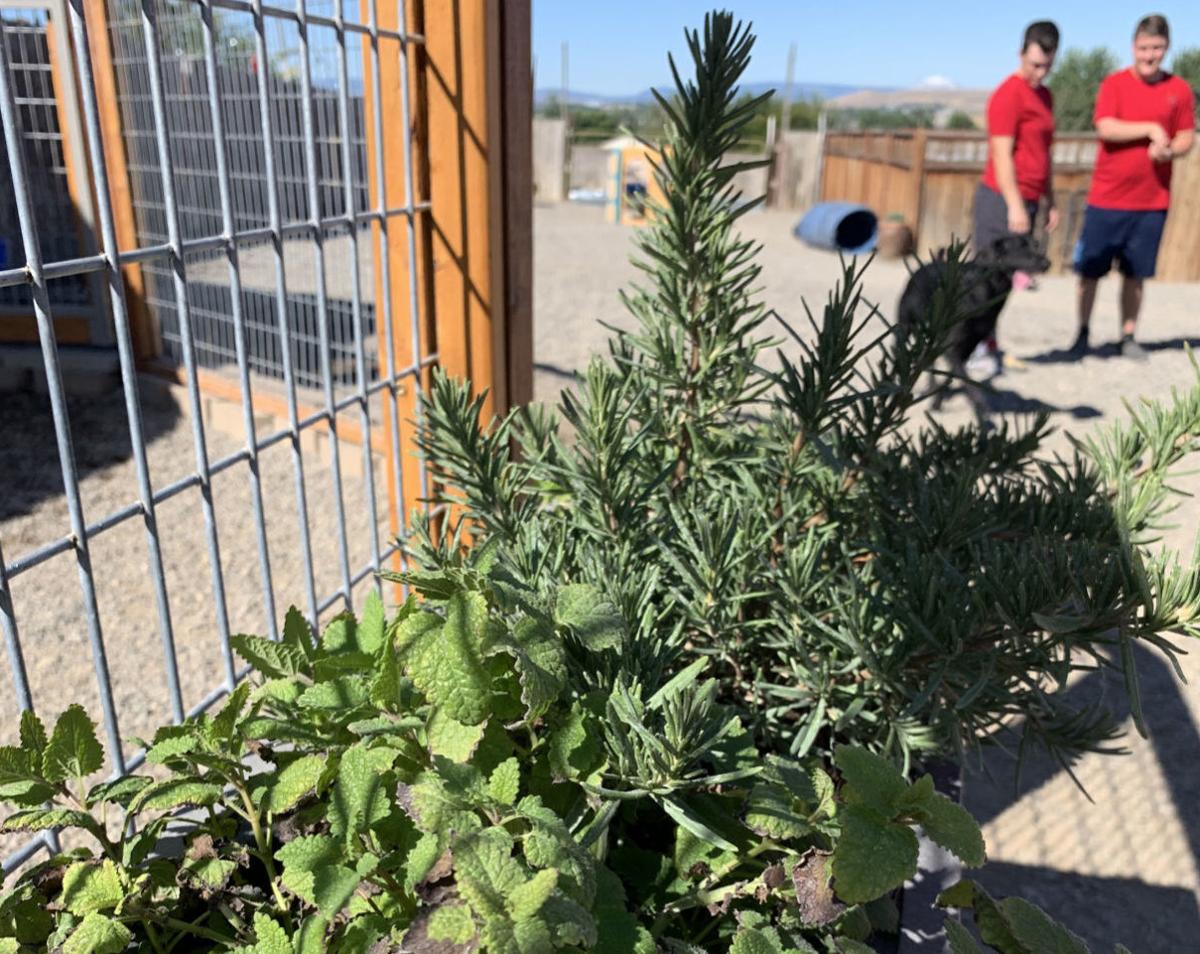 Dogs can sniff or nibble on plants in the herb garden in summer. It’s got lemon balm, rosemary and parsley.

Tracy Anderson and her dog, Olive, enjoying the shade under a canopy at Pomona Pet Services on a hot day.

Black Lab Molly leaps for a toy as she jumps into the pool.

Every day’s a dog party at Pomona Pet!

BreAnna hugs a furry client. The workers at Pomona treat the dogs as they would their own.

Dogs can sniff or nibble on plants in the herb garden in summer. It’s got lemon balm, rosemary and parsley.

Pomona Pet Services is nestled on three acres in Selah farm country. Owners Tracy and Holly Anderson live right next door, so they can look in on their four-legged clients anytime. The business entrance has a sign offering “Howl-o-ween” pictures and treats for dogs, and a fireplug on a plot of turf for — well, you know.

Pomona Pet provides doggie day care and overnight boarding as well as training for dogs who need a little help with their manners. There are dozens of air-conditioned kennels inside, full of curious dogs perched on their beds. Shelves on the walls are stacked with dog toys and blankets.

Tracy lets a big goldendoodle named Cooper out of his kennel and he lopes outside with us. She guides me through a series of gates, careful not to mix up the “littles” from the “bigs.” The dogs are separated into different play areas according to their size and temperament. Mount Rainier and Mount Adams gleam in the distance.

This is a dog paradise, carefully planned down to the smallest detail. The outdoor area has green turf and playground areas. There’s an herb-sniffing garden complete with parsley, which some dogs like to nibble on. There’s also a full-size swimming pool.

Pomona deals with temperature extremes that can range from 104 degrees to four below zero. In summer, half a dozen large canopies provide shade and spray misters line the fences. When it’s too cold to play outside, the dogs stay indoors and do enrichment exercises for mental stimulation.

Tracy grew up in Gainesboro, Tenn., a small town where the only question girls were asked after graduating from high school was “When are you getting married?” She never dreamed that one day she would open a business.

She speaks in a Southern accent so friendly and captivating that after I talk with her for only a few minutes I acquire a drawl too. But make no mistake — under that easygoing demeanor she’s got a steely drive, intelligence and persistence that has served her well.

Instead of settling for the status quo in Tennessee, she moved to Alaska and went into the real estate development business. That’s where she met Holly, her wife and business partner.

But after spending years in real estate, Tracy felt something was missing. “I realized — how you spend your days is how you spend your life,” she said. “I liked real estate and did pretty good at it, but I didn’t love it. I love animals.” She was was already dog sitting and had been in animal husbandry for most of her life. But how could she make it pay? “I knew dogs, I knew horses, I knew animals — but I didn’t know how to run a business.” she said. “That was the most challenging part.”

Holly is from Zillah, which is why they started looking for real estate in this area. They drove up the driveway in Selah, and Tracy said, “this is it. We just fell in love with this piece of property.” It was tough in the beginning. Neither one of them had worked in the industry and they couldn’t get a business loan. They used their retirement savings to start Pomona Pet Services, and Holly remembers it was terrifying.

“At first there were times we had just five dogs. Not in a day, in a month. We’d been open three months, and in that third month, we sat in there and it was just empty.” But Holly said Tracy wasn’t giving up. “Even if there wasn’t a single dog out there, she still got up and went out there every morning,” Holly said. “Whether it was working on marketing materials, cleaning the property, business planning — she was doing something. I remember the very next month in August — in one day we had eight dogs.”

They’ve been open 10 years now, and business is booming. Tracy, Holly and their five employees not only love what they do — they strive to be the best. They think of everything, down to the size of the food bowls. Ebbie, who is small, can’t have a deep bowl because she has a flatter face and can’t get her snout in there. Others, who are fast eaters, have “puzzle feeders” with maze-like compartments, which slows them down.

Pomona won’t take just anybody. Prospective clients must bring in their dog’s vaccination records and confirm they’ve been wormed and that flea and tick repellent has been applied. Then there’s the four-hour “interview” to see if the dog gets along with others.

There’s a fenced introductory area outside where new dogs can sniff around. After they become acclimated, dogs known as “trusted greeters” are allowed in to get acquainted. The new dogs are introduced gradually to their new environment. “The last thing we want to do is throw a dog into a situation they’re not ready for,” Tracy said.

They love their furry clients. “Every night we let them out, then before bed we give them a snack and tell them we love them and say goodnight. Because that’s what they would get at home,” Tracy said.

I asked her why dogs are so important to her. “The companionship, the loyalty ... ” her eyes welled up. “I’m going to cry.” She took a deep breath and continued. “It’s the unconditional love and that silent understanding. They’re little beings, with those big brown eyes. They love you.”

What advice would she give someone thinking of starting their own business? “When I told people what we were going to do, they said, ‘How are you going to do that?’ And I said ‘I am going to get up every single day and do it.’ And that is exactly what I did,” Tracy said.

“The biggest thing was just believing in myself. I was so scared. There were days when I thought ‘How is this going to work?’ Just keep at it. The next thing is hire good people and get out of their way. Let them do their job.”

That girl from Tennessee who took a chance and struck out on her own has created her own career - and her four-legged clients are truly “lucky dogs.”