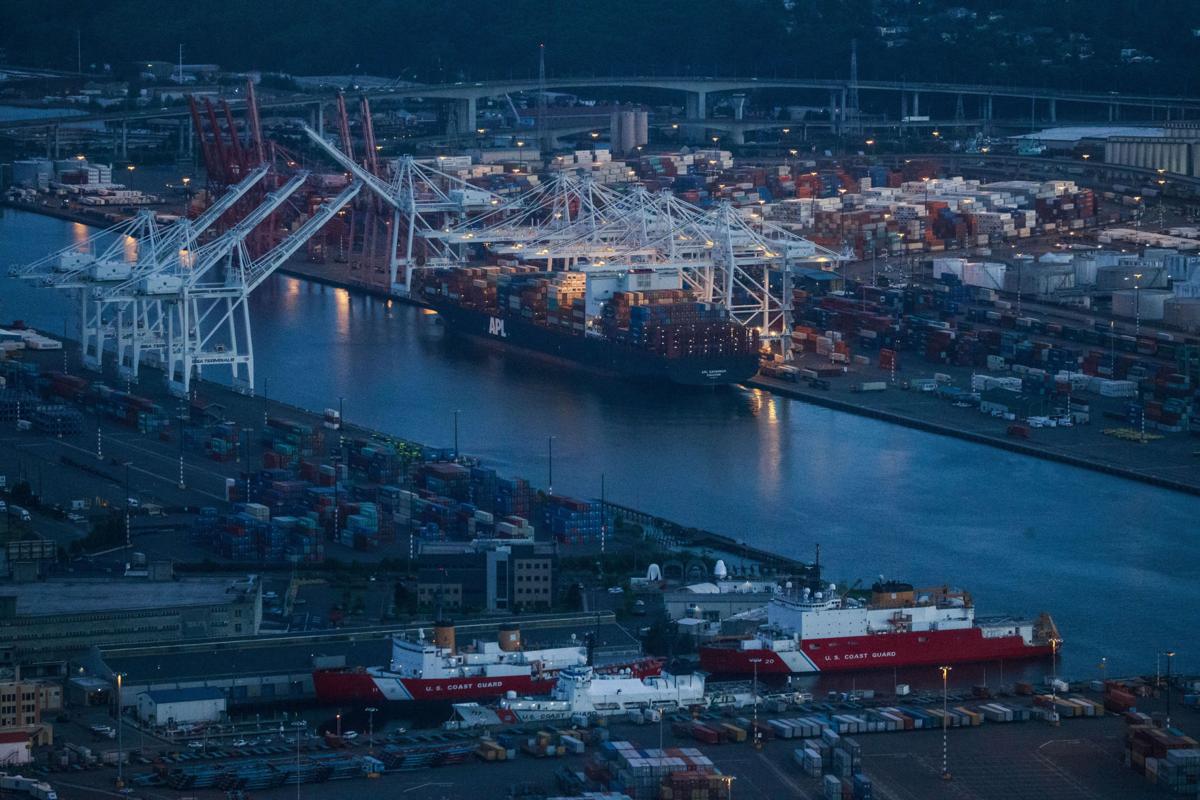 Cargo Ships and the Port of Seattle are photographed Tuesday June 27, 2017. 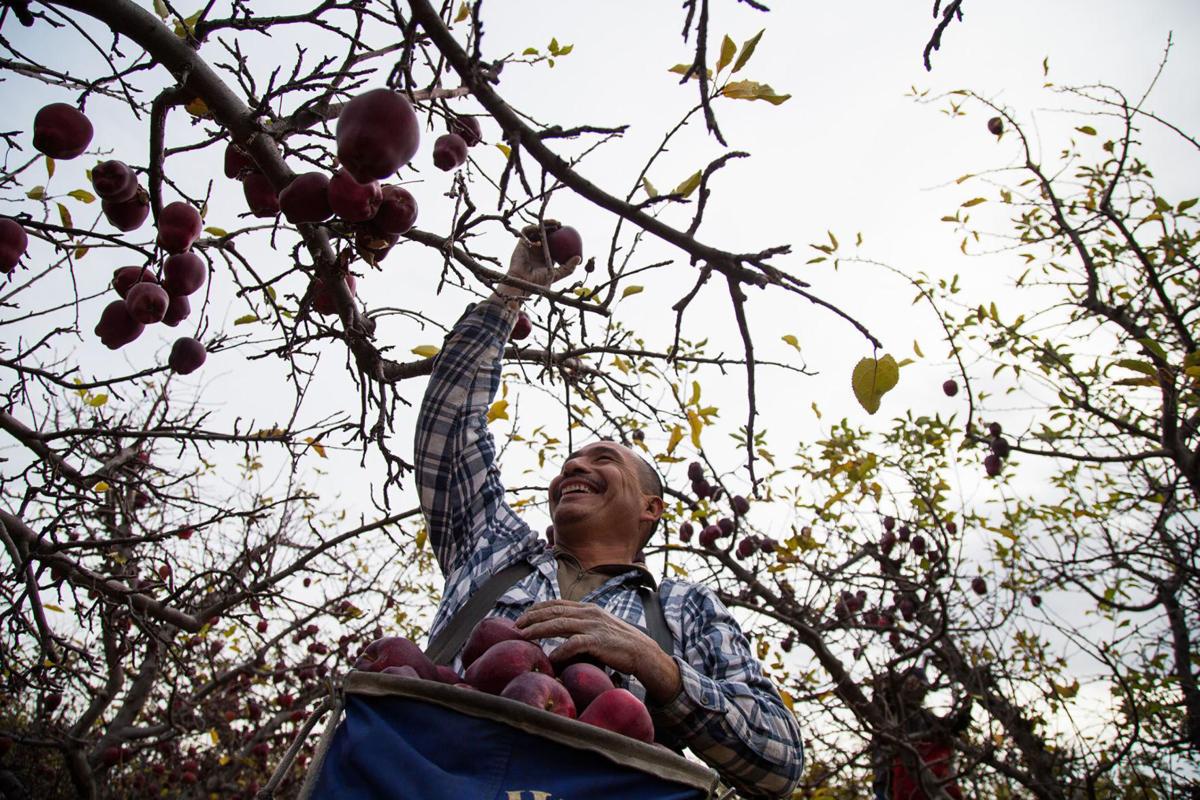 In this photo taken on Tuesday, Nov. 14, 2017, Narciso Cruz picks Red Delicious apples in an orchard in Tieton, Wash.

Cargo Ships and the Port of Seattle are photographed Tuesday June 27, 2017.

In this photo taken on Tuesday, Nov. 14, 2017, Narciso Cruz picks Red Delicious apples in an orchard in Tieton, Wash.

Nearly 28% of Washington state apples were shipped to 60 different countries during the 2018-19 season.

Industry officials expect exports for the 2020-21 crop to not only be below that figure, but to drop to levels not seen in nearly two decades.

As of last week, the state had exported 18.8 million 40-pound boxes of apples, down 20.5% from this time last year and down 16.4% compared to the 2018-19 shipping season, according to figures from the Washington Apple Commission, which oversees international promotions. The percentage of the 2020 crop to be exported is expected to drop to below 25%. That would be the lowest since the 2003-04 crop season when it was at 21.7%

Exporting apples and other agriculture commodities remains a challenge due to impacts from the COVID-19 pandemic, longstanding trade disputes with several countries and a lack of available shipping containers from ocean carriers.

It remains to be seen how soon the federal government can work on any relief with trade and transportation issues that have hampered exports of U.S. products, including Yakima Valley tree fruit. President Joe Biden’s administration has tackled several high-priority policy issues, such as the COVID-19 pandemic response and immigration.

U.S. demand for products made in China, such as personal protective equipment for COVID-19, furniture and toys, increased considerably at the end of last year.

The demand has driven ocean carriers to prioritize getting shipping containers back to China as quickly as possible to get imports to the U.S. and other countries.

That has resulted in ocean carriers opting to leave the U.S. with empty shipping containers rather than filling them up with U.S.-made products, including apples grown in this state.

“Containers are tight, and once we receive a container, it’s difficult to predict what vessel the cargo will load upon,” said Fryhover of the Washington Apple Commission. “This is delaying our exports. (I hope) soon things will return to normal, but it appears there isn’t a quick return to normal.”

Sue Coffey, director of business development for the Northwest Seaport Alliance, which runs the marine cargo operation for the Ports of Seattle and Tacoma, said she has been urging ocean carriers to make more containers available. She said there are groups in Washington, D.C., also advocating for this.

Coffey said as ocean carriers expand their services from the Ports of Seattle and Tacoma, available cargo containers for Washington products will increase as well.

Agricultural products, including apples and cherries, continue to deal with longstanding trade issues with China and India.

In 2019, India imposed an additional 20% tariff on apples, bringing the total duty to 70%. Meanwhile, apples from other countries remain at 50%. That has created issues for the Washington apple industry, which has relied on India as a destination for Red Delicious apples.

“The discrepancy is concerning since March through July (are) the major shipment months for Washington Red Delicious into India,” Fryhover said.

Apples and cherries to China are now hit with a 50% tariff, including two retaliatory tariffs totaling 40%. Not surprisingly, exports of both to China have declined.

An initial trade deal with China in early 2020, just before the start of the COVID-19 pandemic, provided a little relief: Importers could apply for an “exclusion,” which would drop the tariff to 25%.

Still, the damage has already been done.

Just four years ago, China was an explosive market for Northwest cherries. In 2017, 3.3 million 20-pound boxes of cherries were shipped to China. Since the tariffs went into effect in 2018, shipments have declined — to 2.2 million in 2018, 1.9 million in 2019, and to just over 1 million last year, when the region had a small crop.

Keith Hu, who oversees promotions for Northwest Cherry Growers, said he’s hoping for a slight increase in exports to China with a larger crop but doesn’t expect a return to 2017 figures anytime soon.

As a result, Hu said his organization is looking to other markets, such as Taiwan, Korea and Southeast Asia.

“I don’t see the relationship with U.S. and China improving anytime soon,” he said.

In late January, Chinese social media blew up with news of traces of coronavirus on a package of Chilean cherries. Despite an effort by Chinese and Chilean officials to declare the cherries safe, it still hampered exports, Hu said. There wasn’t any indication that anyone was sickened, and Chinese epidemiologists said the risk of being infected by imported fruit was very low.

Hu isn’t sure whether China would be willing to work with the U.S. if there was a similar situation.

Mark Powers of the Northwest Horticultural Council, which represents the tree fruit industry on public policy matters, said he’s started conversations with Biden administration officials about finding solutions that would lead to countries lifting tariffs. Still, there isn’t any indication of when things could change.

U.S. Trade Representative Katherine Tai, who was confirmed last month for the position, recently indicated that the U.S. is not yet ready to lift tariffs on Chinese products.

“I think they continue to study the situation and evaluate how to best proceed,” Powers said.