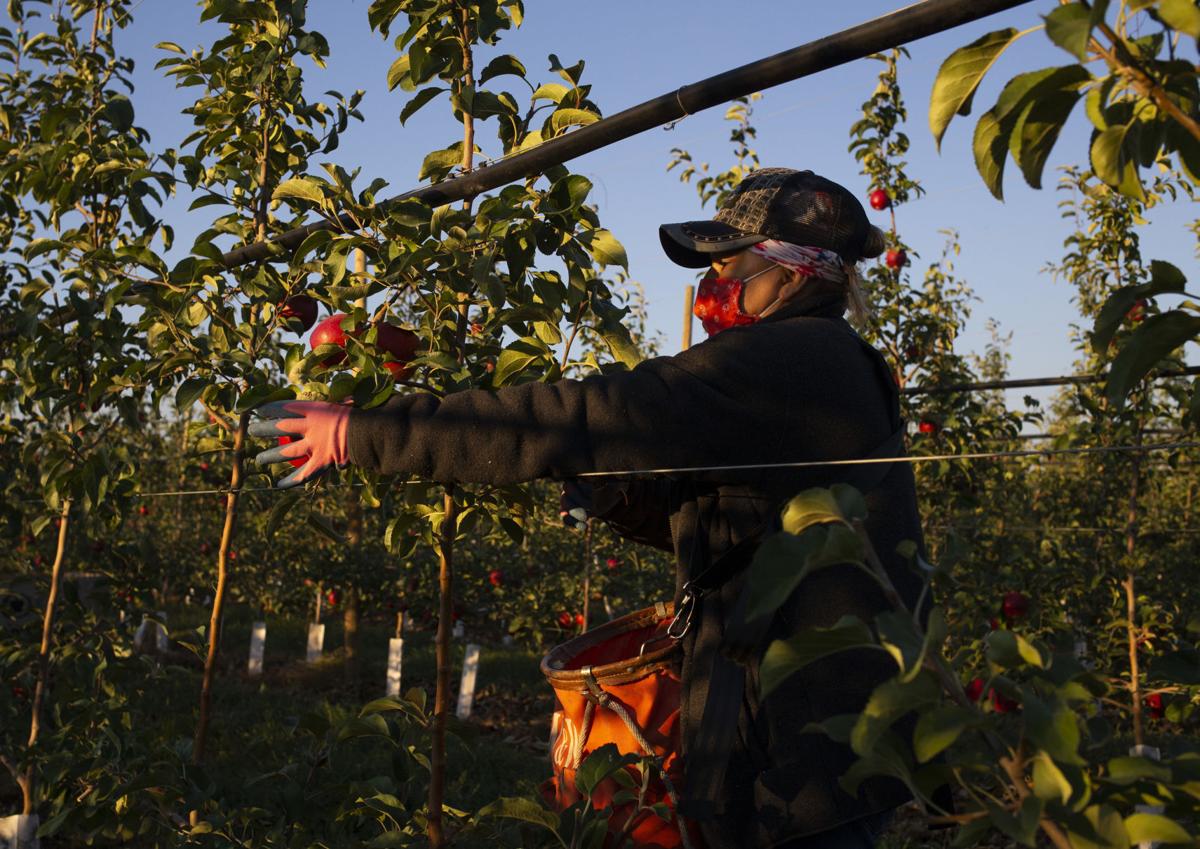 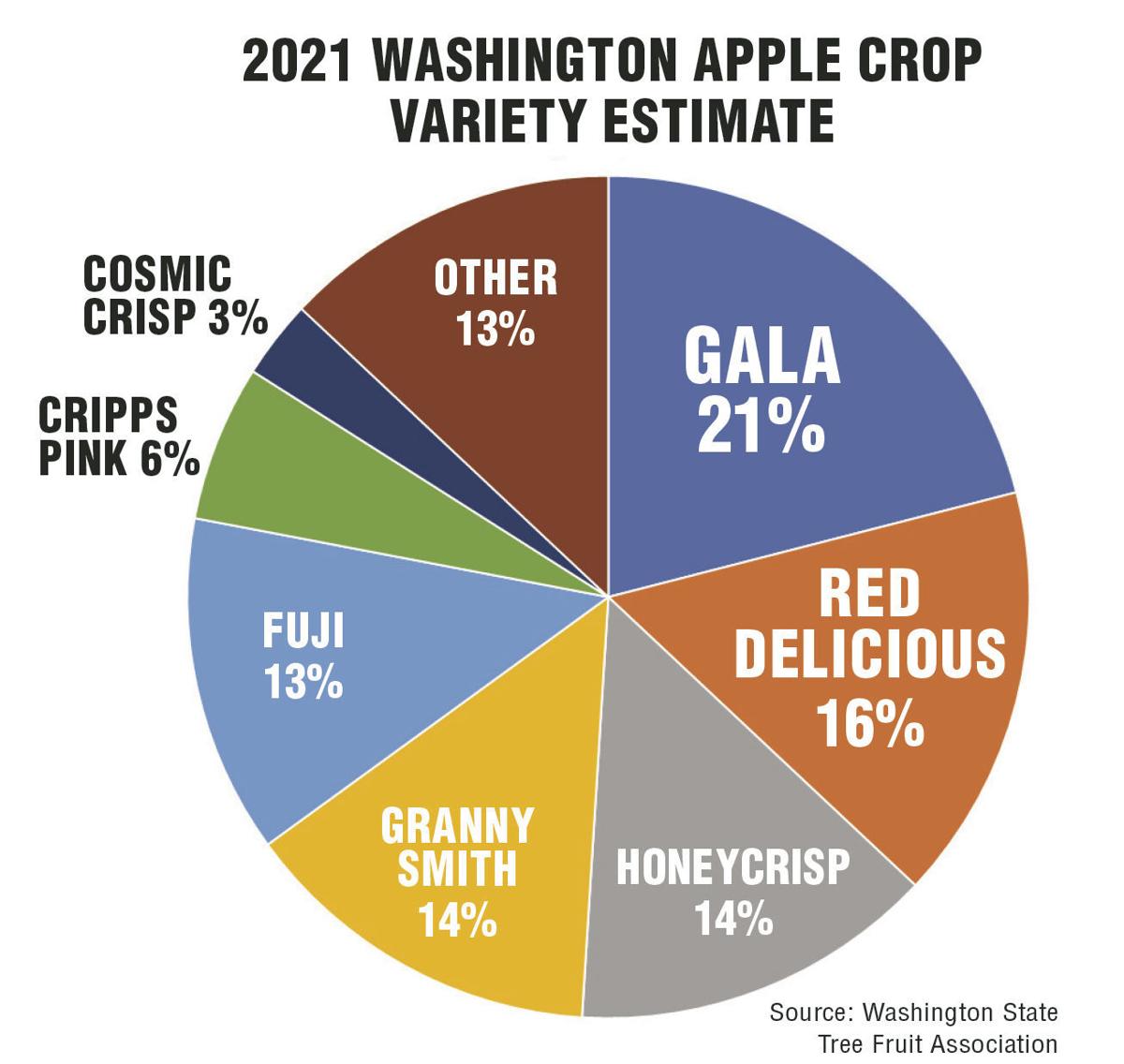 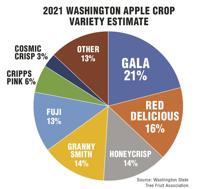 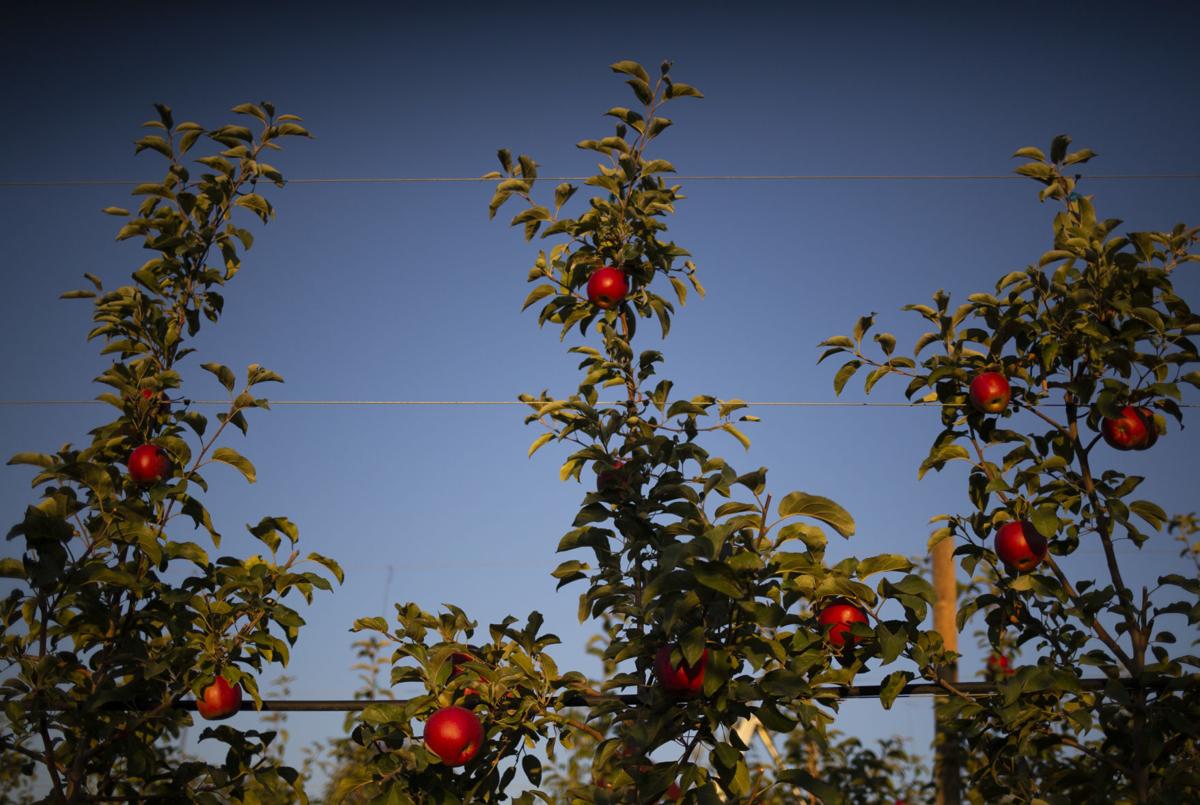 Quality over quantity is the latest prediction for this year’s apple harvest.

Officials with the Washington State Tree Fruit Association have lowered their 2021 estimate of the statewide apple harvest by 5.3%, from 124.85 million to 118.255 million boxes.

“The apple harvest is still wrapping up for some Washington varieties, but based on volumes harvested so far our members are expecting a decrease,” Jon DeVaney, the association’s president, said in a news release issued Tuesday.

“Our members are reporting smaller crops of some varieties including Honeycrisp, Galas and Red Delicious. High heat earlier in the season affected what was ultimately picked in some cases,” DeVaney reported. “The organic crop is still projected to be over 15 million boxes.

“In spite of the smaller harvest, we are seeing high-quality fruit and consumers can expect delicious Washington apples throughout 2022,” he added.

Tuesday’s updated apple harvest estimate is based on a survey of association members, and is measured in standard, 40-pound boxes of fresh apples. It represents fruit picked through Oct. 31 and a best estimate of what is still to be harvested.

Among this year’s success stories is the growing market share and consumer preference for the newer Cosmic Crisp variety. It officially was released to stores on Monday, the earliest the apple has come to market since it was first publicly sold in 2019.

Kathryn Grandy, chief marketing officer for Proprietary Variety Management, which has the license to market Cosmic Crisps, said the harvest is anticipated at 4.5 million boxes, compared to 1.75 million last year. Cosmic Crisps are estimated to be about 3% of this year’s apple harvest, according to the Washington State Tree Fruit Association.

As the harvest was underway in September, growers with Barrett Orchards, Gilbert Orchards and Valicoff Family Farms said cooler temperatures in the latter part of summer helped their apple crop recover somewhat from the record heat of June and early July.

“Yields are down on apples, but the quality seems excellent,” said Sean Gilbert, with Gilbert Orchards near Yakima.

Apple harvest off to good start in Central Washington

Yakima Valley growers and officials with the Washington State Tree Fruit Association say the crop of early varieties such as Galas and Honeycrisps is a little lighter than in 2019, but surprisingly good considering the weather and wildfire conditions.