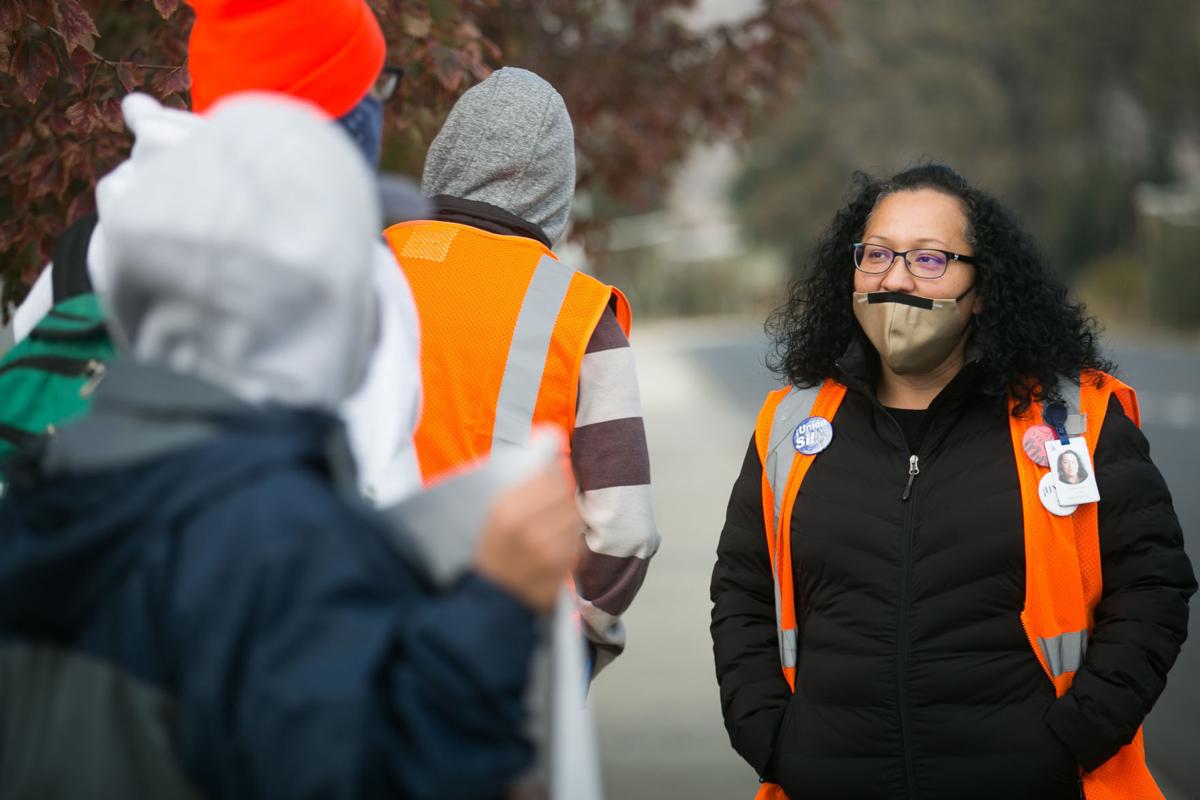 FILE — Angelina Lara, right, shares a conversation with Edgar Franks regarding the Workers United for Justice union Wednesday, Oct. 28, 2020, outside of Allan Brothers Fruit on Allan Road in Naches, Wash. 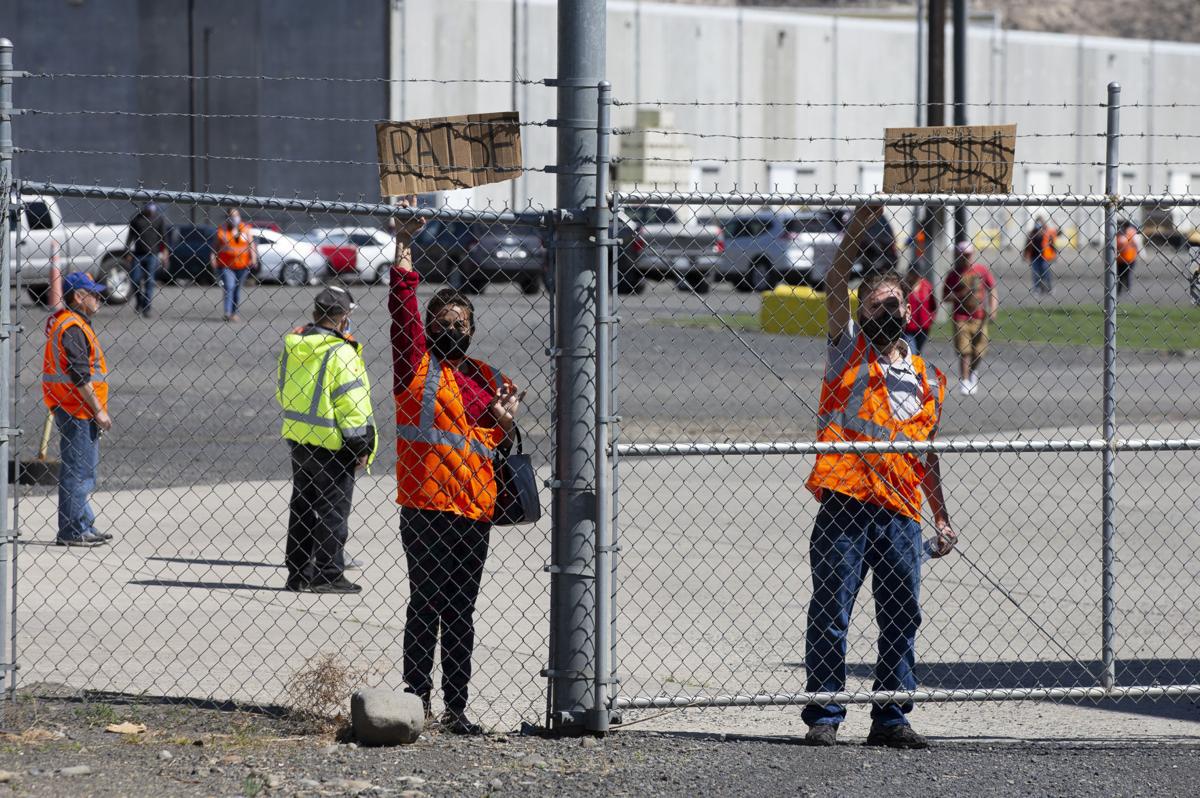 FILE — Workers hold up signs during a strike at Allan Bros. Fruit on Thursday, May 7, 2020, in Naches, Wash.

FILE — Angelina Lara, right, shares a conversation with Edgar Franks regarding the Workers United for Justice union Wednesday, Oct. 28, 2020, outside of Allan Brothers Fruit on Allan Road in Naches, Wash.

FILE — Workers hold up signs during a strike at Allan Bros. Fruit on Thursday, May 7, 2020, in Naches, Wash.

Those charges will go before an administrative law judge during a May 4 hearing, where the judge will also hear objections from TUJ regarding the union election result last year.

Both the NLRB’s complaint and the objections from TUJ claim that Allan Bros., a Naches-based fruit company, hindered TUJ’s organization efforts and led to an unsuccessful election at the end of the year.

“Employees have the right to self-

organize for better workforce conditions, better hours, better wages,” said Alfredo Gonzalez Benítez, an attorney with Columbia Legal Services, which is representing TUJ. “They filed these charges because of Allan Brothers is hindering their right.”

Allan Bros. CEO Miles Kohl said the union’s claims are inaccurate and the company is prepared to address them at the hearing.

Kohl said the company had the option to agree with NLRB’s findings that it had committed unfair labor practices and post that acceptance in its public areas.

“We don’t agree with those findings,” he said. “We would like a hearing to provide evidence to show that. We are confident (the company’s actions) were not impactful to the overall election.”

The charges NLRB found merit in primarily concerned union organization, but it also found merit in an unfair labor practice charge filed by workers in May 2020, shortly after Allan Bros. workers started their protest of the company’s COVID-19 response.

According to NLRB’s complaint, it noted that on or around May 8, an Allan Brothers supervisor threatened employees with termination if they “paid attention to employees engaged in a strike due to working conditions.”

The complaint noted several incidents that NLRB said merited charges of company interference in TUJ’s union organizing. Those included prohibiting off-duty employees from parking lots and other nonworking areas from handing out union materials and holding conversations with employees that included statements designed to discourage a vote for union representation.

“It’s a fact the union members were prevented from being on Allan Bros. property and distributing union information,” Gonzalez Benítez said.

Kohl said the company only prohibited the union’s presence in parking lots and other areas when there were employee complaints regarding safety.

Kohl said employees were concerned about being in close contact with union representatives when it wasn’t clear if they received COVID-19 screening.

He said the opportunities union representatives would have typically had to interact with employees were limited due to the company’s COVID-19 measures.

“We never told anyone they couldn’t leaflet or campaign,” he said. “There was campaigning that occurred both on-site and off-site.”

The union’s objection to the election result also asserted that the company provided incentives — gift cards — to encourage employees to vote against union representation.

Kohl said that the gift cards were part of an effort to provide employees a token of appreciation in place of a company holiday party, which was not held due to the COVID-19 pandemic. When the gift cards were distributed, the union was already in the mail-in election period.

In both the objections and the NLRB complaint, a ruling in favor of the union would result in the previous election being set aside and a new election held.

The union organizing effort came from a worker strike last May over the company’s response to the COVID-19 pandemic. That spurred other protests at several other Yakima Valley fruit packing houses.

The Allan Brothers protest ended a few weeks later, after a committee representing the protesting workers signed a return-to-work agreement.

Workers pursued unionization efforts, concerned that the company would not fulfill its end of the agreement.

“We are organizing this union because we want to be treated with dignity and respect at work, because Allan Bros. needs to recognize that our lives and safety matter,” said Agustin Lopez, president of TUJ, in a news release issued by Columbia Legal Services. Lopez was among the Allan Bros. employees who participated in protests last year.

Kohl said that the company has continued to talk to employees, including those affiliated with the union. Kohl said the company fulfilled the components of the return-to-work agreement, including a pay raise. While the company ended a $1 an hour bonus for working during the COVID-19 pandemic, the company implemented a new permanent pay raise that, in general, was the same or higher than the bonus.

Kohl said that employees also received a cost-of-living raise in January to coincide with a raise in the state’s minimum wage. The company continues to meet with employees to get feedback, Kohl said.

“I feel very good about what we’ve done both with COVID-19 safety and just in general engagement on how we can be better as a company,” he said.

New election for Allan Bros. workers will happen under settlement between union, company

A new union election at Allan Bros. will be held later this year under a settlement reached between the Naches fruit packing company, Trabajad…