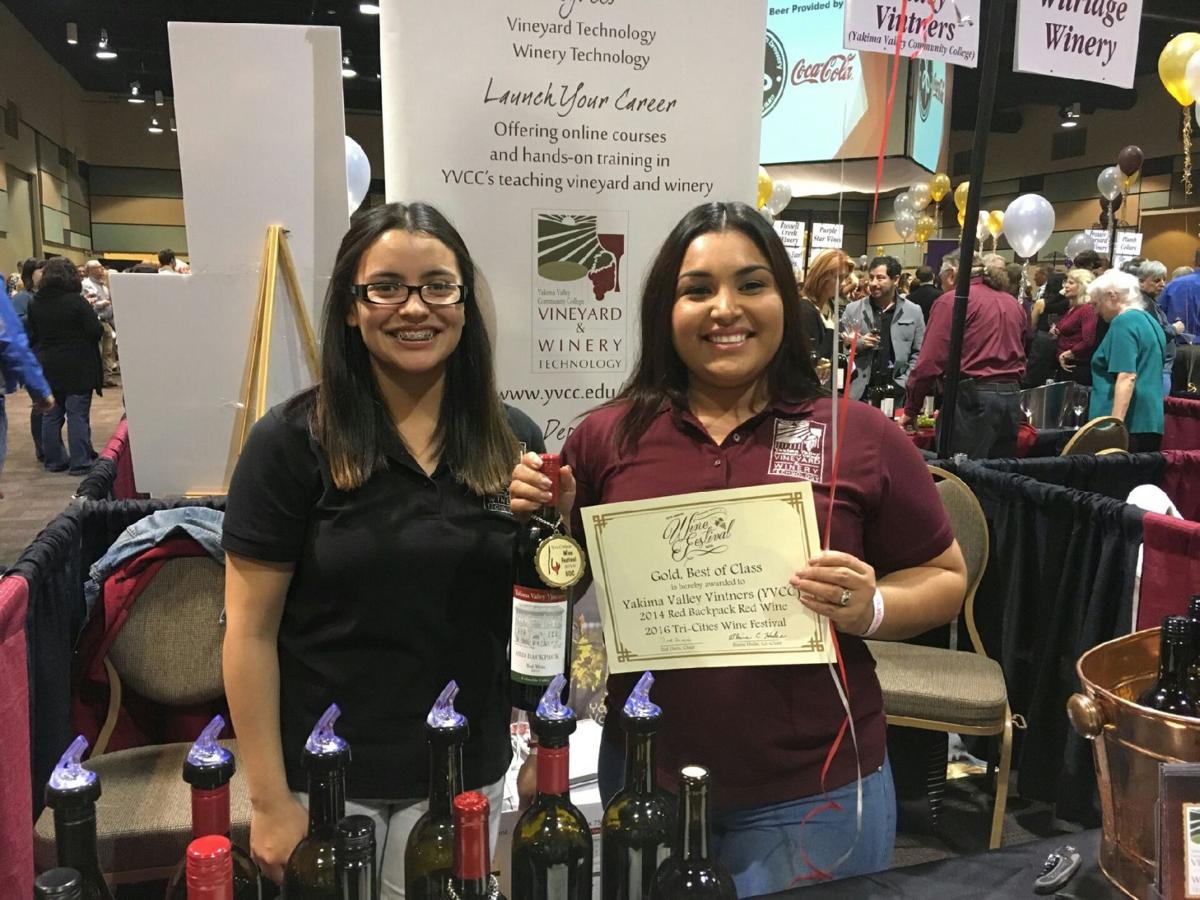 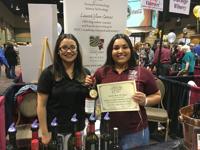 Emilse Osorio, right, and Nereyda Ponce pose with the winning gold medal and "Best of Class" certificate that Yakima Valley Vintners earned for their 2014 Red Backpack at the Tri-Cities Wine Festival earlier this month. (Photo courtesy of Emilse Osorio) 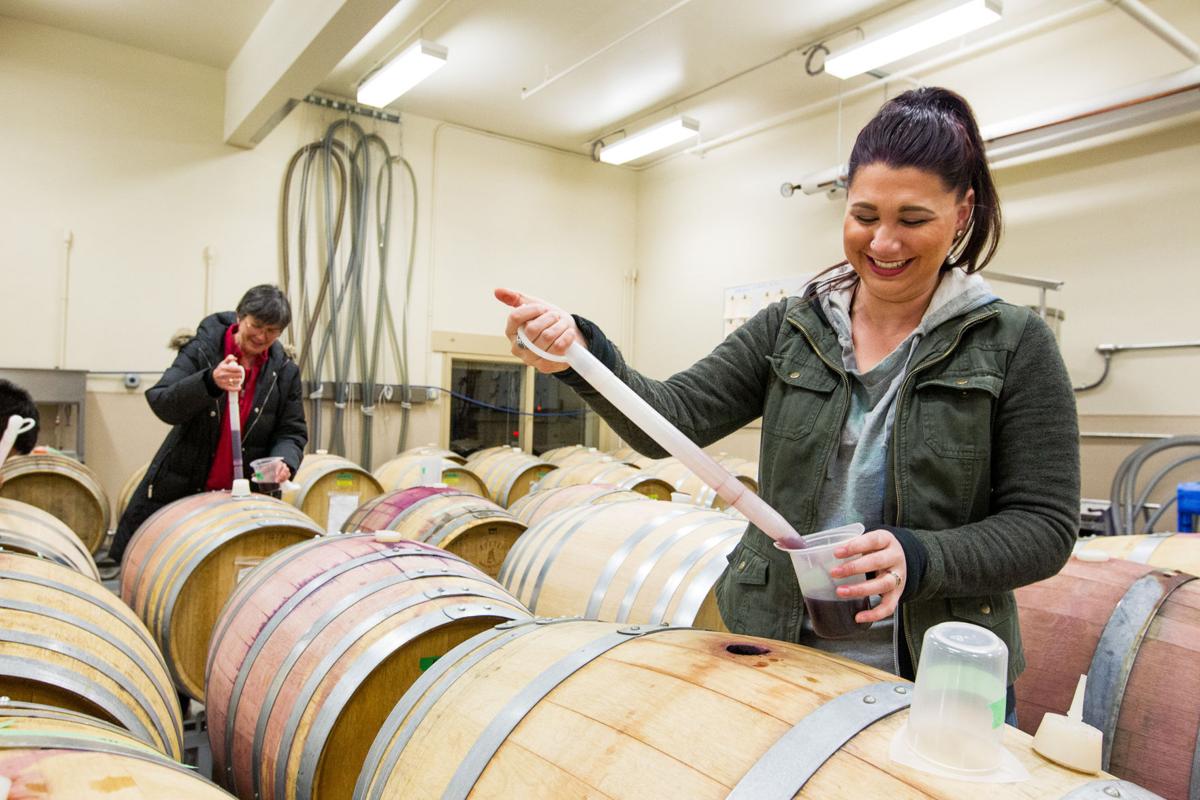 Amie Thornton, a second year student, takes wine samples before testing during her enology class at Yakima Valley College’s Yakima Valley Vintners winery in Grandview, Wash. on Tuesday, Nov. 22, 2106. The program has won dozens of awards since releasing its first vintage in 2008, including a handful of awards at the Tri-Cities Wine Festival earlier this month. (SHAWN GUST/Yakima Herald-Republic) 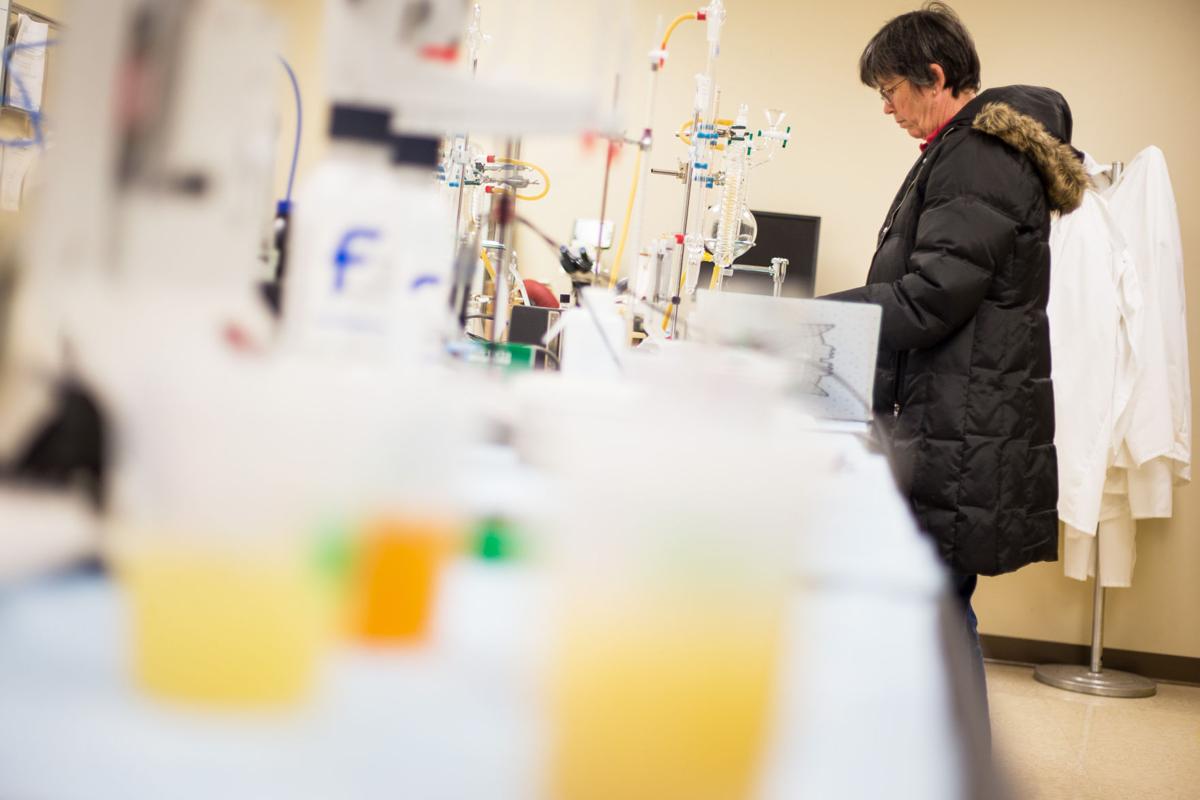 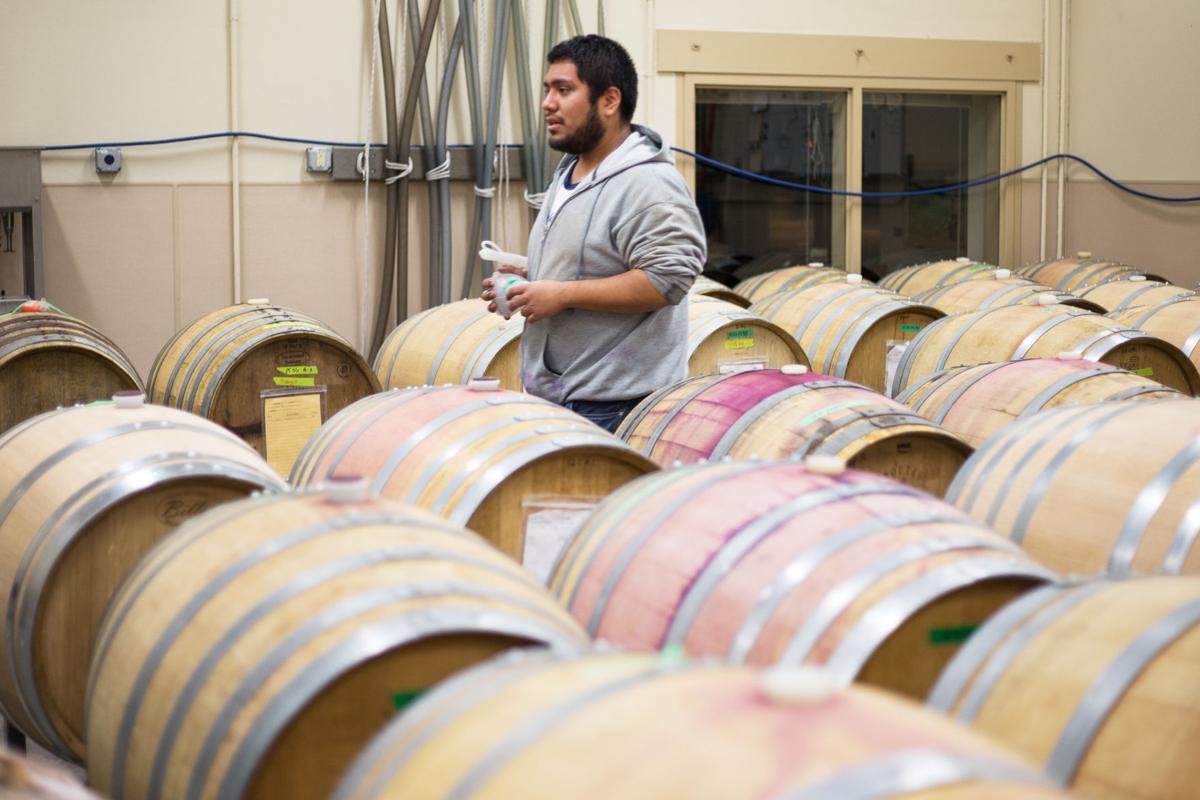 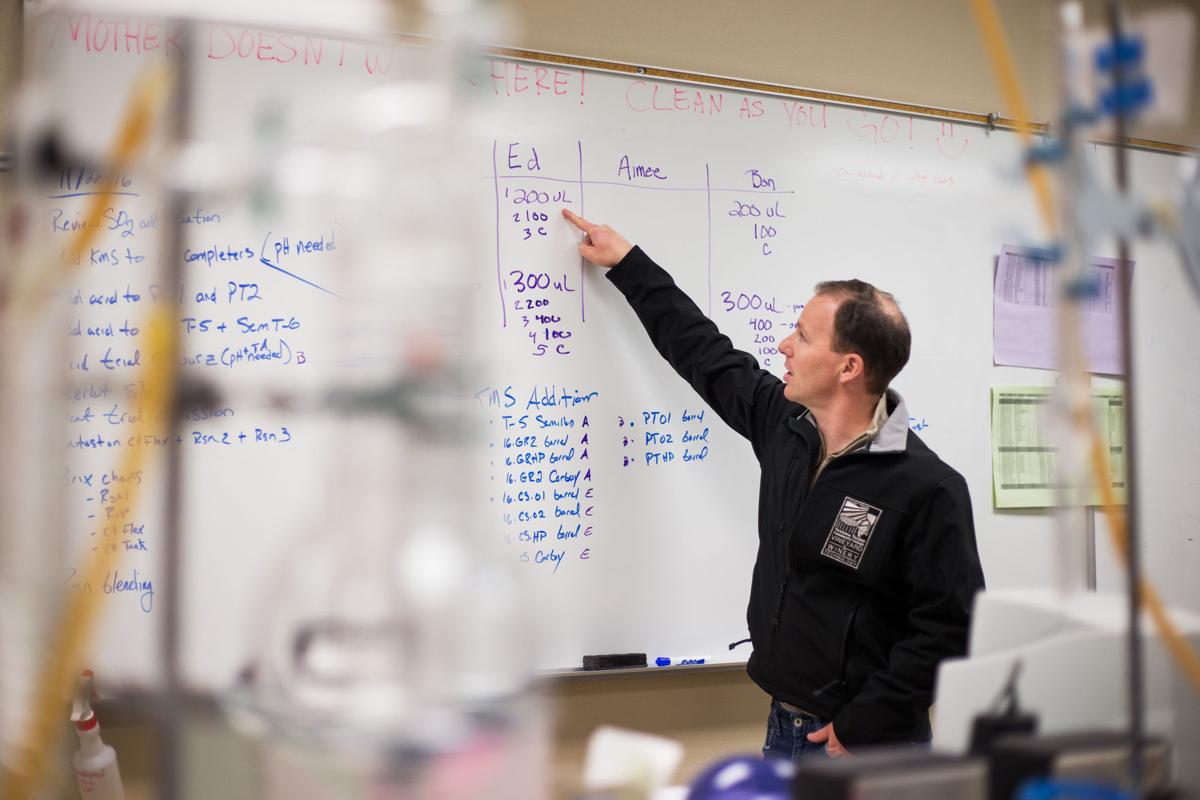 Emilse Osorio, right, and Nereyda Ponce pose with the winning gold medal and "Best of Class" certificate that Yakima Valley Vintners earned for their 2014 Red Backpack at the Tri-Cities Wine Festival earlier this month. (Photo courtesy of Emilse Osorio)

Amie Thornton, a second year student, takes wine samples before testing during her enology class at Yakima Valley College’s Yakima Valley Vintners winery in Grandview, Wash. on Tuesday, Nov. 22, 2106. The program has won dozens of awards since releasing its first vintage in 2008, including a handful of awards at the Tri-Cities Wine Festival earlier this month. (SHAWN GUST/Yakima Herald-Republic)

GRANDVIEW, Wash. — During the Tri-Cities Wine Festival, attendees crowded around the booth of Yakima Valley Vintners.

The teaching winery at Yakima Valley College’s Grandview campus had submitted several wines — including the 2014 Red Backpack, a Bordeaux-style red wine blend, which turned out to be the most popular.

“We had a feeling that was the best one of the bottles we had,” said Emilse Osorio, 25.

Osorio, who will complete YVC’s winery technology program this spring, was right — judges not only awarded the 2014 Red Backpack with a gold medal but also named it  “Best in Class,” deeming it the best among more than 90 wines awarded a gold medal.

Yakima Valley Vintners received medals for nearly all the wines it submitted for the festival.

What makes the student-run winery’s accomplishments noteworthy is the level of competition. With less than a handful of student-run wineries in the state, Yakima Valley Vintners’ wines were judged alongside commercial wineries.

“Because the judging is blind, the panel cannot differentiate if the wine was made by students, a small winery or one of the giants we have in the Pacific Northwest,” said Ted Davis, president of the Tri-Cities Wine Society, the festival’s organizer.

Yakima Valley Vintners “has been submitting wines for a number of years and has done extremely well in the competition.” Davis said. “This is especially significant since these are student winemakers without some of the resources, experience available to some winemakers.”

Indeed, only one of the 18 YVC wines submitted to the Tri-Cities Wine Festival in the last three years did not receive a medal.

And since the winery’s inception in 2007, Yakima Valley Vintners has garnered more than 75 different medals at various wine competitions.

“It’s rewarding ... to see how much the students really honor the recognition,” said Trent Ball, vineyard and winery technology instructor at YVC and co-lead adviser for Yakima Valley Vintners. “It’s one of their first attempts to participate in something like this.”

Osorio said she is obviously thrilled when one of Yakima Valley Vintners’ wines is recognized but tries to see the positive when the feedback is not as glowing.

“When they say you lose, you actually win,” she said. “You’re winning the ability to know what you did wrong and to correct it next year.”

Indeed, for Ball, while the medals are nice, the feedback the students receive in such competitions is even more valuable. He explains to students that judges care less about what they enjoy, and more about whether the wine exhibits the characteristics of a high-quality wine.

“It’s a way to validate where they’re at as they begin to enter their career as professional winemakers,” he said.

This hands-on approach garners praise from Co Dinn, who runs his winery, Co Dinn Cellars, out of incubator space at YVC.

The Washington wine industry benefits when it has trained winemakers who not only know winemaking techniques but also are familiar with making wines with grapes grown in this state, Dinn said.

“You get know the region, you get to know the peculiarities of the area,” Dinn said about the students working at Yakima Valley Vintners. “You’re much farther ahead when you go out in the job market.”

The majority of the fruit used in Yakima Valley Vintners’ wines is donated by area growers, though the winery buys it from time to time, Ball said.

The students are involved in every step of the winemaking process from crushing the grapes to bottling.

Dinn said the mentoring  and advice students receive by YVC instructors and staff is crucial – especially with a new batch of students coming to work at the winery each year. He credits that guidance for YVC’s success in wine competitions.

“The guiding part of the process gives you the experience and continuity from year to year,” Dinn said about the winery’s advising staff, which includes Ball, instructor Holly Ferguson and instructional technician Brad Smith, who helps manages the winery’s tasting room “They’ve built an institutional competency.”

Osorio hasn’t been one to rest on her laurels. She’s been working diligently in the winery’s lab, testing wines that will be released next year.

“I hope the ones we’re working on will have even better medals,” she said.

After completing her YVC studies, which includes completion of the vineyard technology program, which focuses on wine grape production, she wants to study viticulture and enology at Washington State University.

“I want to learn the process from the dirt to the bottle,” she said. “You never know where life is going to take you, so I want to have both sides down.”