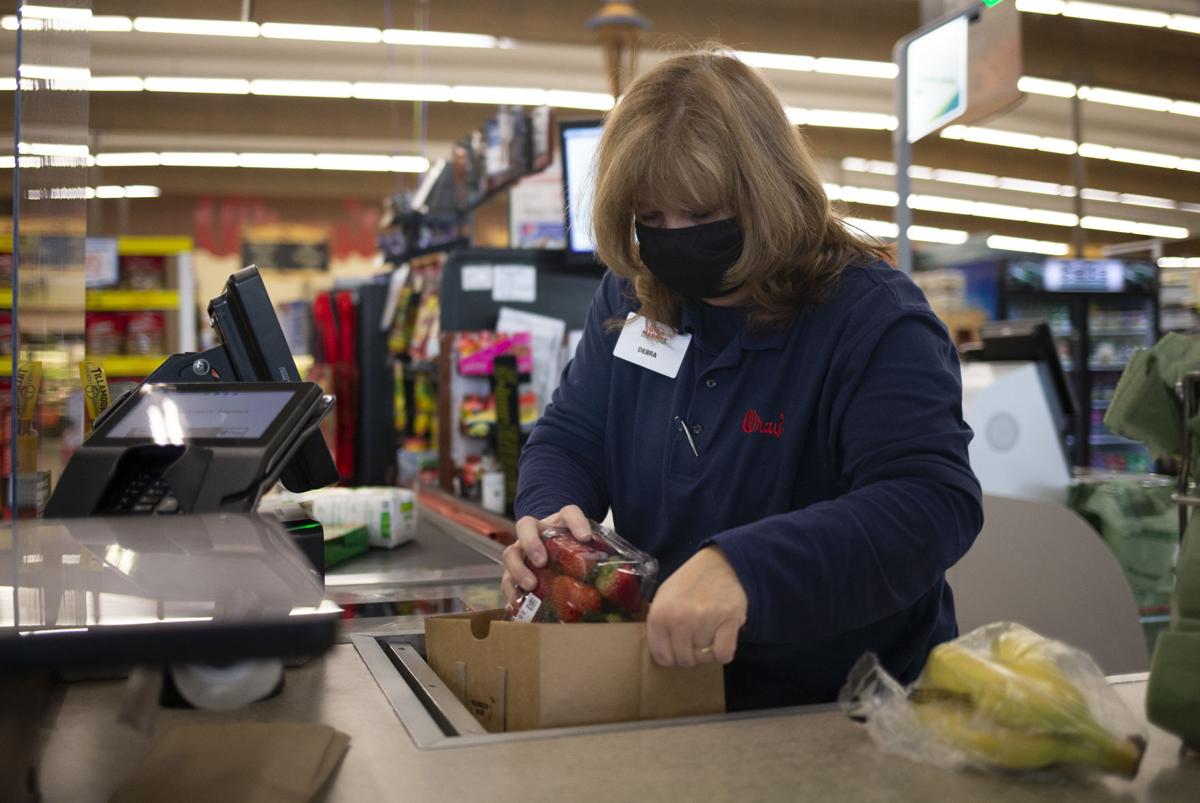 Debra Flores puts strawberries in a paper bag for a customer on Wednesday, Jan. 6, 2021 at Wray's Food and Drug in Yakima, Wash. 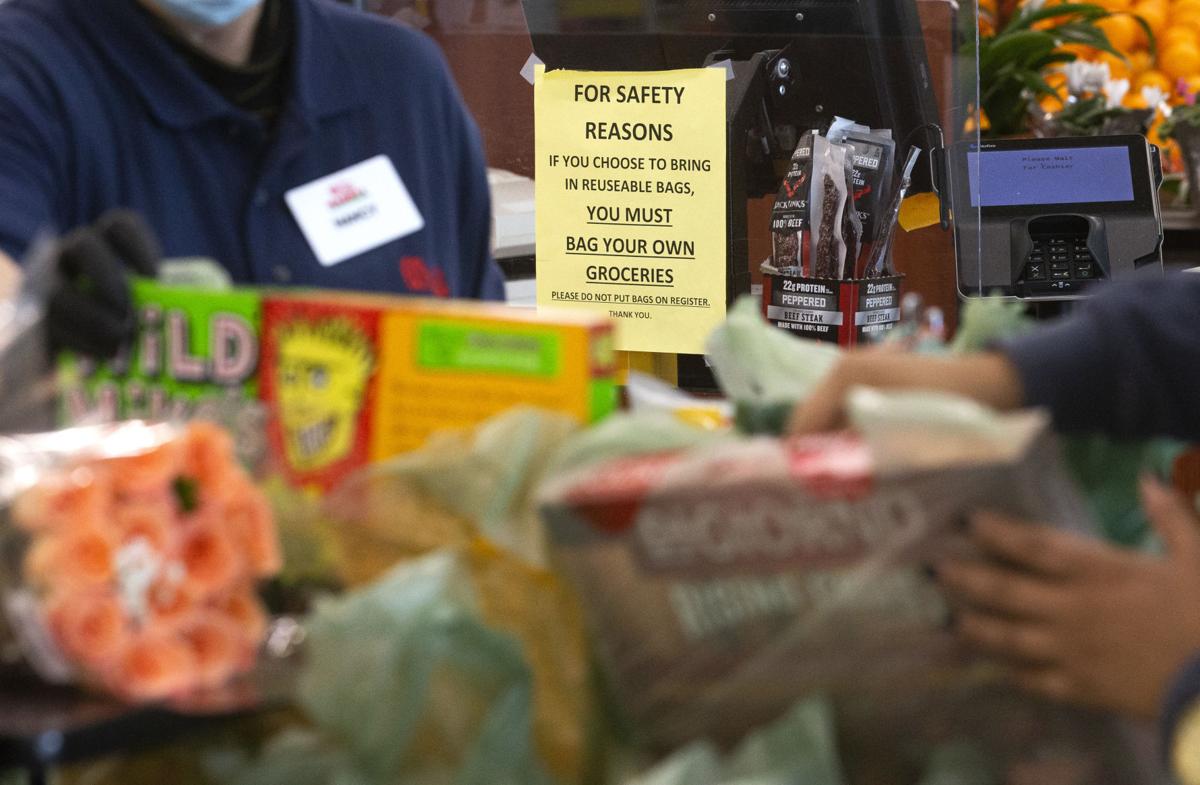 A sign informs customers that anyone using a reusable bag must bag their own groceries on Wednesday, Jan. 6, 2021 at Wray's Food and Drug in Yakima, Wash. 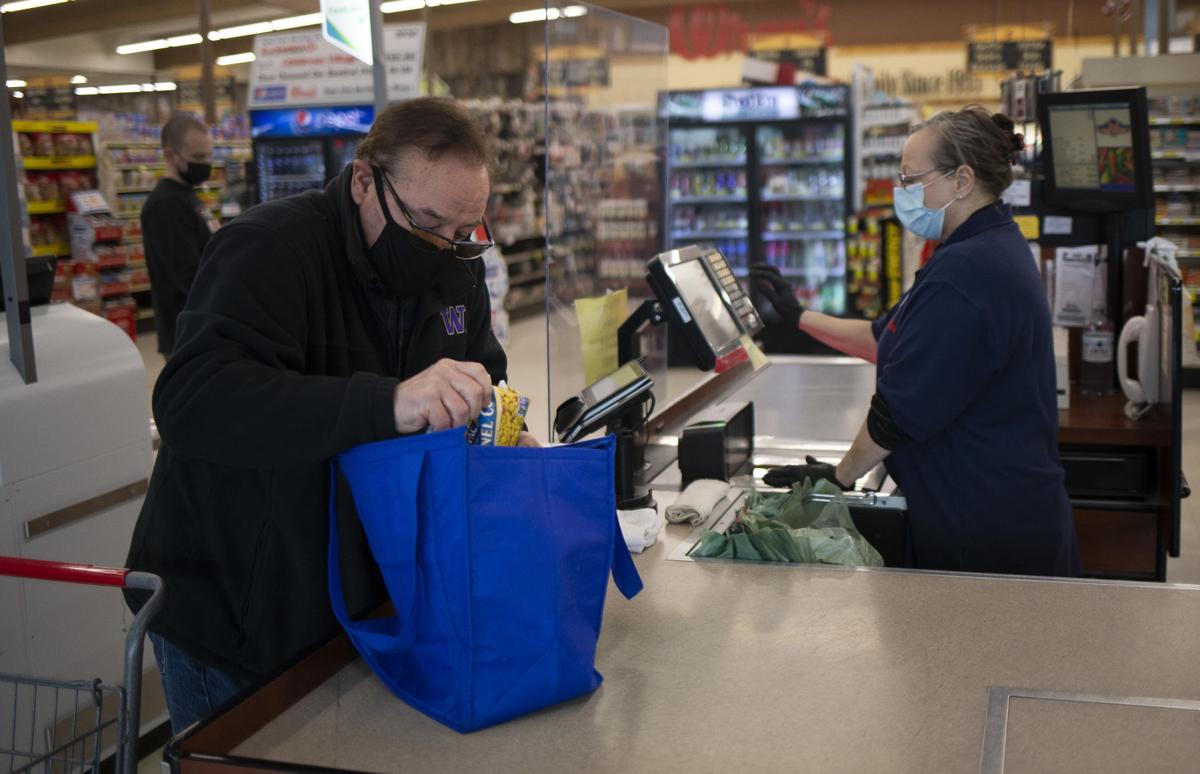 John Balmer puts his groceries in a reusable bag he brought on Wednesday, Jan. 6, 2021 at Wray's Food and Drug in Yakima, Wash. Wray's allows customers to bring reusable bags but requires they bag their own groceries.

Debra Flores puts strawberries in a paper bag for a customer on Wednesday, Jan. 6, 2021 at Wray's Food and Drug in Yakima, Wash.

A sign informs customers that anyone using a reusable bag must bag their own groceries on Wednesday, Jan. 6, 2021 at Wray's Food and Drug in Yakima, Wash.

John Balmer puts his groceries in a reusable bag he brought on Wednesday, Jan. 6, 2021 at Wray's Food and Drug in Yakima, Wash. Wray's allows customers to bring reusable bags but requires they bag their own groceries.

On Jan. 1, retailers and restaurants statewide were set to say goodbye to single-use plastic bags under a law passed last year.

But as the COVID-19 pandemic raged on, the challenges to implementing such a ban grew. Grocery stores restricted use of reusable bags, a common alternative, to limit the potential of COVID-19 spread.

Manufacturers of the thick, reusable plastic bags or compostable bags shifted to make personal protective equipment. Raw materials that would have been used for paper carryout bags were no longer available as they were being used for other items, such as takeout containers, that were in high demand.

That Jan. 1 effective date has been officially delayed. Gov. Jay Inslee issued a proclamation on Dec. 18 to push back the effective date to Jan. 31, and there’s legislation in Olympia to move it to July 1.

“This was the right thing, to give some relief as we hopefully work our way (through) the tail end of this pandemic,” said state Rep. Strom Peterson, co-sponsor of House Bill 1053, in a phone interview.

The bill, if passed, would allow Inslee to request an extension through Jan. 1, 2022, with at least 45 days’ notice.

A delay was welcomed by retailers and restaurants who had already dealt with numerous challenges due to the COVID-19 pandemic, said Mark Johnson, senior vice president of policy and government affairs for the Washington Retail Association, a statewide group that advocates for retailers.

The organization is fully supportive of the bill, saying that it provides predictability for its members, who have faced the opposite in the last several months.

“To delay it until July 1, we think that is a much more doable goal,” Johnson said. “We’re fully in support of the bill, and we’re hoping the Legislature will pick it up, run with it very early and approve it quickly.”

Under the change, single-use plastic bags will no longer be allowed at retailers, restaurants and any event where food or goods are sold.

Shoppers can use reusable bags or be charged 8 cents for either a large paper bag or a thick — at least 2.25 millimeters — reusable plastic bag. The retailer would use the fee to cover the cost of bags. Retailers could also charge for the distribution of green or compostable bags.

The new law provides one standard for the entire state. Previously, there were bans at 39 local jurisdictions, which created an issue for retailers and restaurants that had multiple locations in the state and various policies regarding the use of plastic bags.

“It was a huge patchwork across our state,” Johnson said.

One essential part of the law is that businesses have about a year to use previously purchased plastic bags, as long as they’re not under a local plastic bag ban.

That was a key component that made the new law more bearable for local business owners, Johnson said.

The state Department of Ecology, which has been tasked with implementing the new law, had been working with local governments and businesses on the transition. That work included providing a toolkit for business on its website.

Laurie Davies, program manager for the Department of Ecology’s Solid Waste Management program, said there are indicators that some of the larger retailers were already starting to transition to the bags that would be allowed under the new law.

But for the most part, most businesses would have had a hard time complying with the law now, she said.

She notes that many grocery stores are not allowing reusable bags due to COVID-19 concerns, and most businesses are struggling to secure the necessary bag due to supply chain issues.

Wray’s has struggled to get paper bags with its logo for its four Yakima Valley locations, said president Chris Brown.

Brown said the thicker recyclable plastic bags that would be allowed under the new state law have also been hard to come by.

“They’re just not available in the quantities that would be needed,” he said.

And customers are now just starting to bring reusable bags. Wray’s allows the bags, but customers must bag their own groceries.

Brown said he would also be challenging a system to track the fees for the bags, so he’s glad for any additional transition time.

“It’s just another thing to keep track of,” he said.

With at least a few weeks — and likely months — until the law is fully implemented, Ecology has more time to work on other outreach efforts, such as translating its business tool kit into several languages, Davies said.

“I hope we can use this downtime while they’re working through this issue to do outreach to the non-English speaking groups,” she said.

Peterson, who sponsored a House bill that was a companion to the Senate bill that was eventually passed, said a broad coalition of environmental groups, trade groups and bag manufacturers worked together on the legislation.

That same coalition came together again and agreed on the need to pass a bill to delay the law’s effective date, he said.

But it doesn’t change the urgency of having such a law, Davies said. There is still an environmental concern, including from Inslee and other officials.

“It doesn’t change his commitment to reducing plastics in the environment,” she said.

Peterson, who is a restaurant owner, shares that sentiment.

He and others who pushed for this new law understand the need to focus on the state’s COVID-19 pandemic response — and to ensure the safety of retail and restaurant workers. But there are also concerns about the increasing use of plastics, namely from the increase in food takeout and delivery, and the long-term effects on the environment, Peterson said.

“We know this is still urgent when it comes to our overall environment,” he said. “The public health and the health of our workers is first on the list. Let’s look in six months, if we have turned that corner, and start implementing this law.”