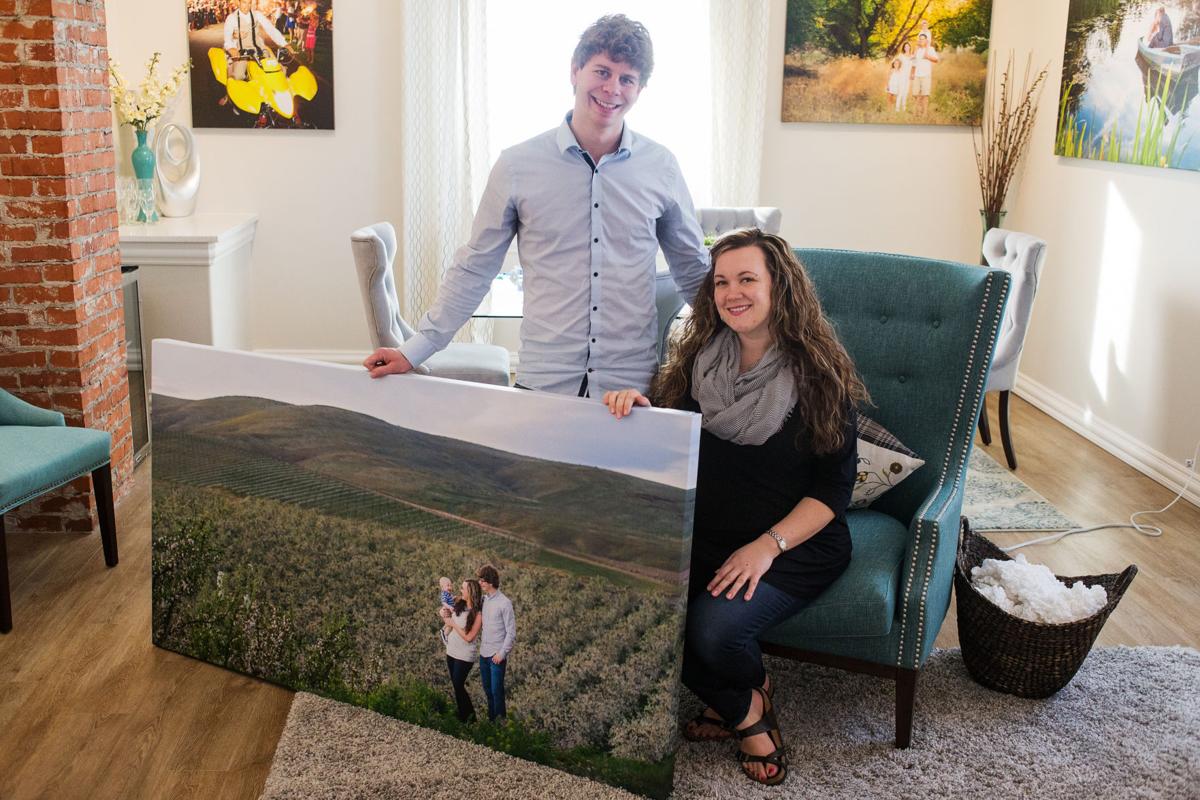 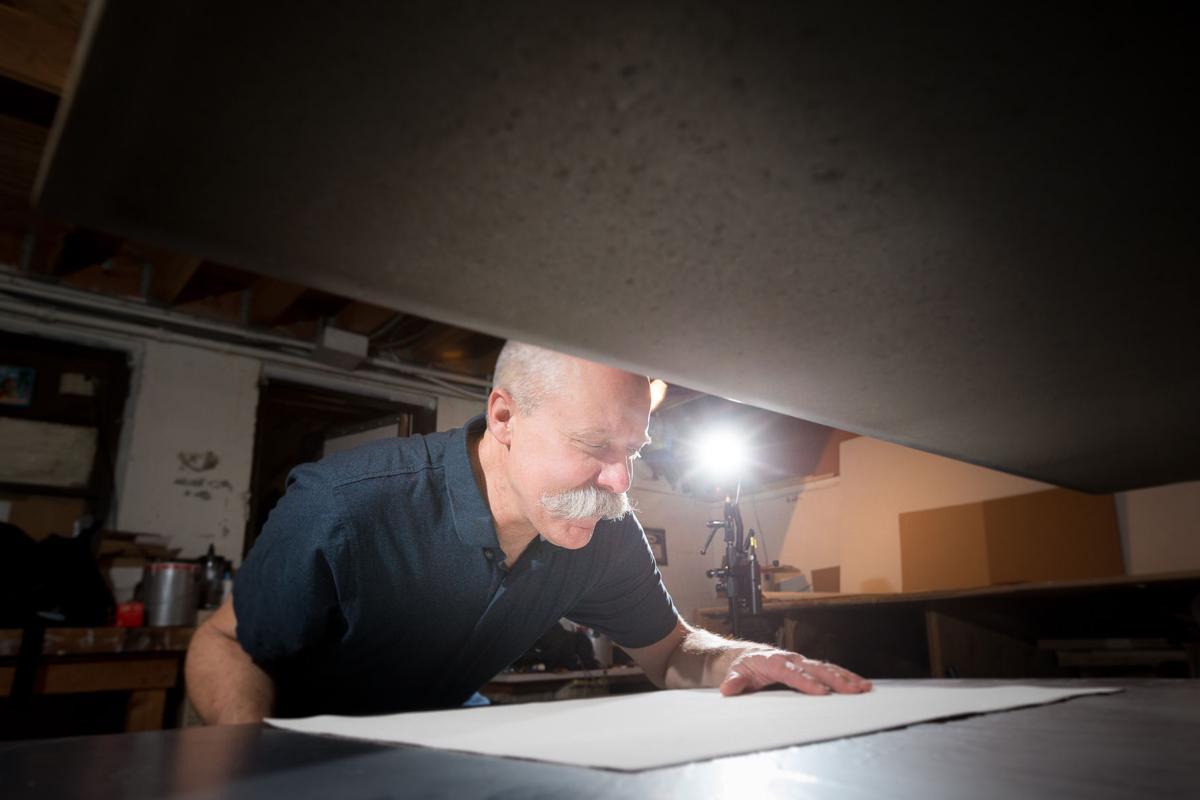 Some might have been surprised to see Ken Whitmire attend a Memory Montage Photography class a few months ago.

But Whitmire, a nationally recognized Yakima photographer with more than six decades of experience, showed his fellow classmates — and Tavis and Amy Guild, the Memory Montage Photography owners who ran the classes — the value of a “teachable heart.”

“There is so much to know and learn,” Tavis Guild said.

While Tavis, 31, and Amy, 29, are younger and less experienced, Whitmire had come to hold his mentees in high regard, as portrait artists as well as business owners.

“Their business acumen (is) really strong,” said Rich Breshears, owner of Breshears Professional Photography in Kennewick, who knew Whitmire and also knows the Guilds. “And Ken really felt that Tavis was one of his best young artists to come along.”

The Guilds have purchased Whitmire’s well-regarded canvas mounting business, a few months after Whitmire died at age 86. The business, now called Whitmire Canvas, works with professional photographers to install their photographs on canvas, turning them into durable, museum-quality wall portraits, akin to those done by artists centuries ago.

Whitmire Associates, Ken Whitmire’s photography studio, closed at the end of the year. The Guilds also purchased Whitmire’s portrait archive, ensuring that six decades of family and other portraits would be available for reprints and other uses for years to come.

The mentorship between Whitmire and the Guilds started a few years ago when the husband-and-wife team were in the early stages of their tenure as business owners and photographers.

Tavis Guild said he appreciated Whitmire’s willingness to help other photographers get better at their craft.

“To find someone who has that depth of portrait knowledge is so difficult to find,” he said.

The Guilds were regular attendees of Whitmire’s annual International Wall Portrait Conference. There, professional photographers from across the country gathered to learn best practices in preparing, photographing and displaying large-scale, high-quality portraits.

But the relationship blossomed when the Guilds started regularly getting canvas services from Whitmire for Memory Montage Photography. Pickup times became an opportunity for the couple to pick Whitmire’s brain. Through those conversations, the Guilds learned the importance of promoting photography and portrait art not just as a hobby, but also as a profession.

The conversations in Whitmire’s final months of life shifted from photography techniques to the future of his business, Travis Guild said. Whitmire was still going in his mid-80s but knew he needed a plan should he decide to retire or if something else, such as illness, came up.

The day before Whitmire died in November, Tavis Guild had what would be a final conversation with him, which centered around one issue: the future of the canvas mounting company.

“We already had enough conversations; (buying the business) was on our radar,” he said. “It was time to step up and take the reins.”

In purchasing the canvas business, the Guilds gained a craftsman in Ward Whitmire.

“When I order a canvas, it’s like asking Ward to build a couch,” Tavis Guild said.

Ward Whitmire spent a few years in college studying engineering, but it was an emerging new technology his father embraced that provided the younger man a career.

In the 1980s, Ken Whitmire, who had already established himself as one of the top photographers in the nation, embraced canvas mounting. Ward Whitmire learned the craft and developed it over more than three decades. Ward’s work as a canvas mounter gained just as much national prominence among photographers as his father’s work. Today, Ward’s high-quality work stands out among a sea of photo canvas products sold by big-box stores or online.

Most places offering canvas simply print the photo on the canvas. However, given the nature of canvas, which is stretchy before sagging, the quality of the photograph’s display can deteriorate over time, said Breshears, the Kennewick photographer.

Ward Whitmire’s work is far more involved. The process includes building the frame to stretch the canvas, sanding the canvas to optimize the display of the photograph, sealing the photograph onto the canvas and applying latex on the photo to harden the canvas, making it a more durable final product.

“Ward is actually able to back these images in a way that 100 years from now they’ll be hanging on walls,” he said.

To the relief of Breshears and other professional photographers, Ward Whitmire will continue on: the business’ name is not only an homage to Ken Whitmire but also to Ward Whitmire’s talents.

Ward Whitmire said he didn’t take over the business himself because his experience lies in the craft, not being a businessman. He felt more confident that the Guilds’ experience running Memory Montage Photography would help the canvas business not only survive but also thrive.

For example, he said the business will now accept digital files. Photographers previously had to supply the prints. Now the canvas business will work with a lab to print the photographs for mounting.

“If this (sale) wasn’t happening, I probably would have closed it down,” he said. “... This is really an opportunity to take it into the 21st century.”

“Tavis knows that I got this in my heart,” Ward Whitmire said. “He knows how much I love doing it. ... We’re really melding well together to produce a high-quality portrait.”

Family is everything, Ken Whitmire says. As a professional photographer for 60 years, his gr…

When the president of the Eastman Kodak Co. in Rochester, N.Y., asks you to take a portrait …

The business offers canvas mounting services for professional photographers who in turn offer it to their customers. More information can be found by going to www.whitmirecanvas.com or by calling 509-248-6700.