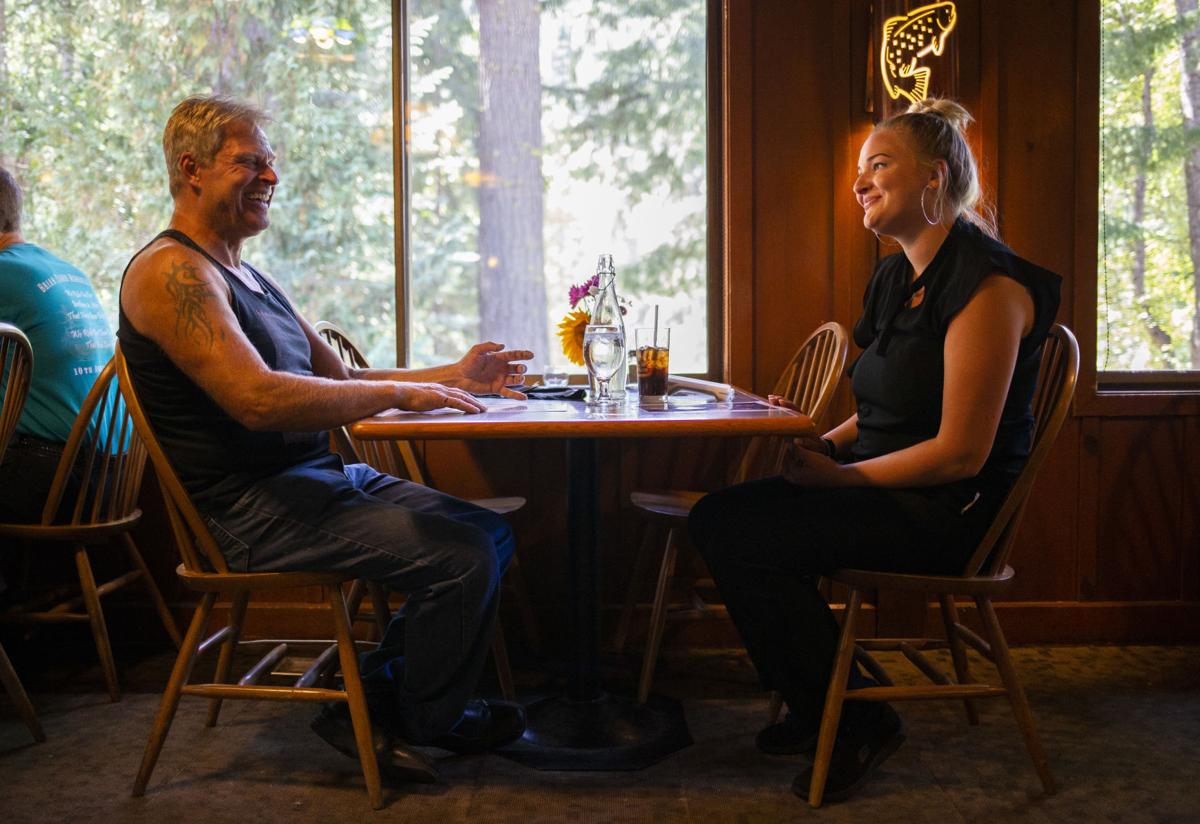 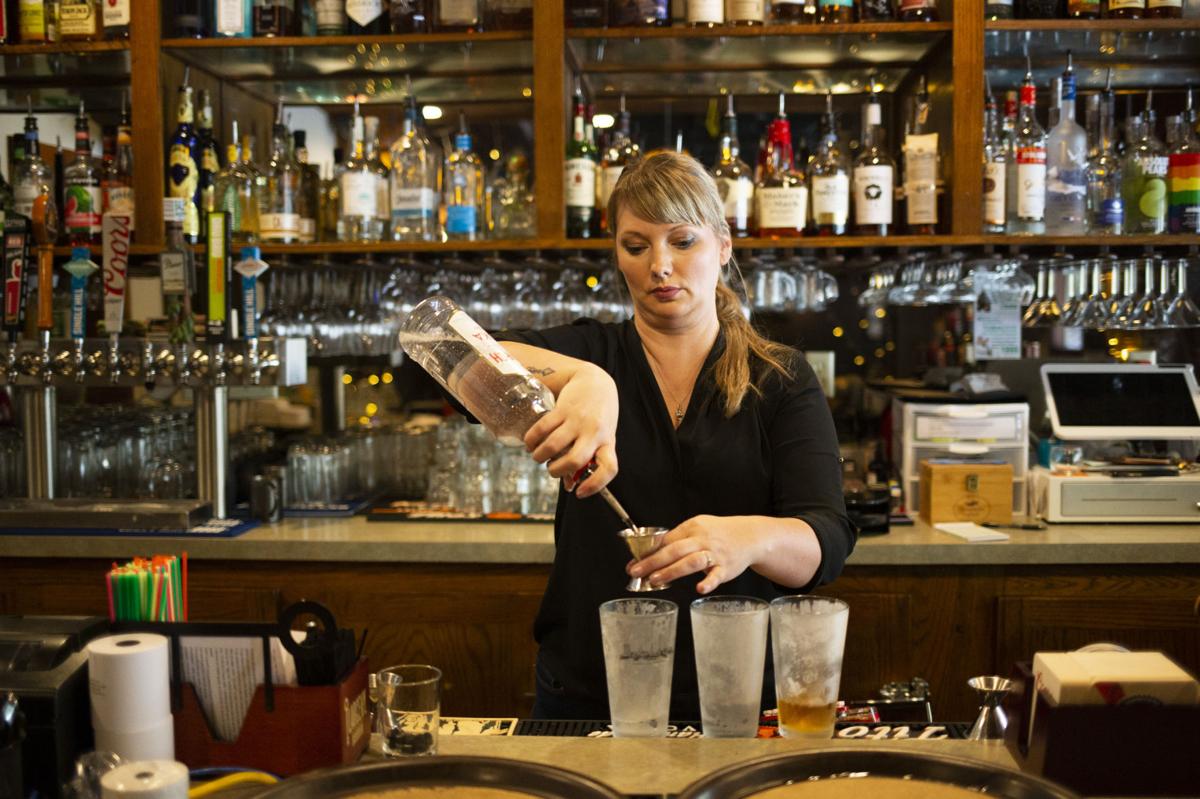 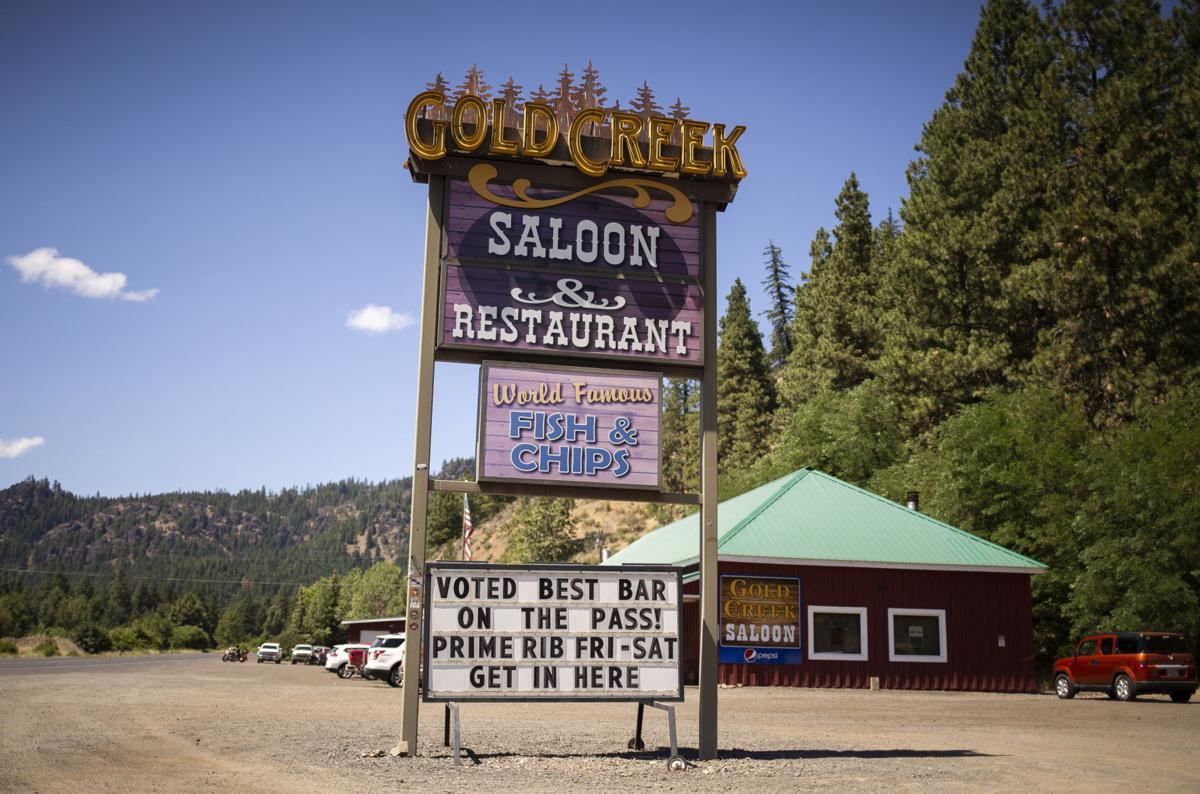 The front of Gold Creek Saloon is pictured Saturday, July 17, 2021 near Naches, Wash. 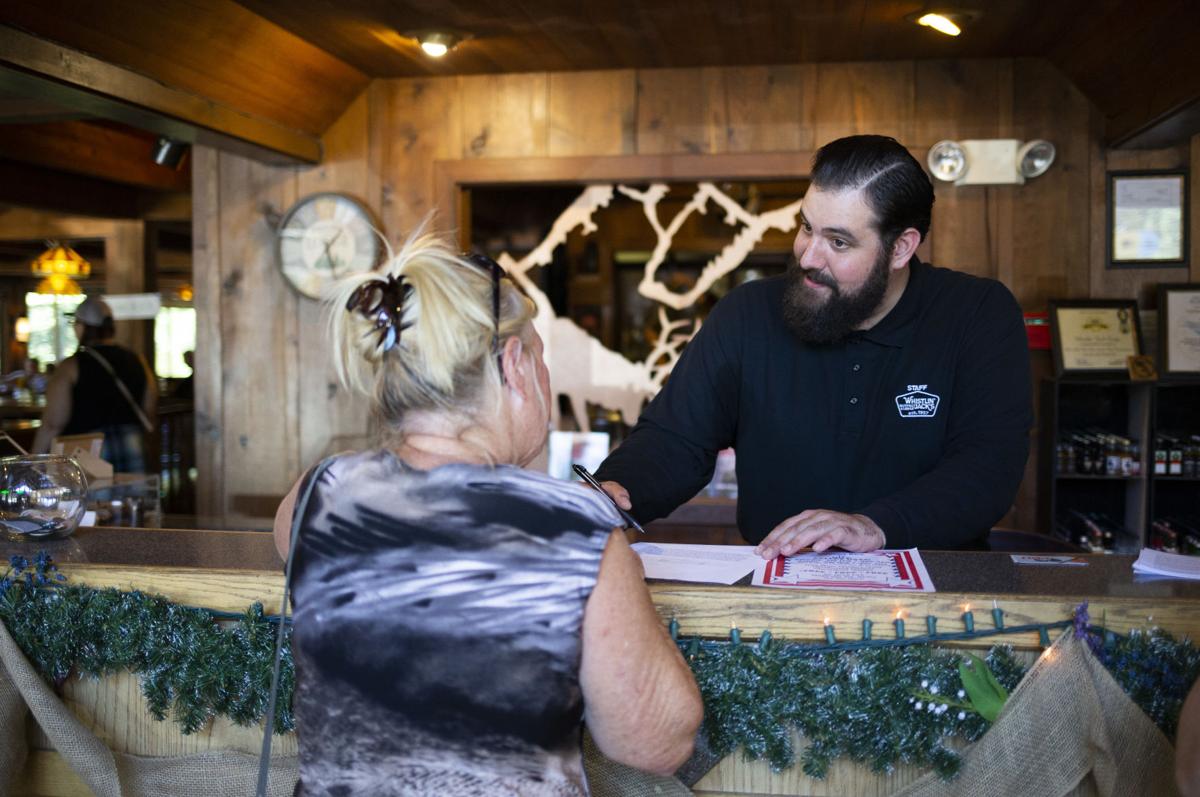 The front of Gold Creek Saloon is pictured Saturday, July 17, 2021 near Naches, Wash.

Last fall, Bailey Hempstead moved to the Yakima Valley to be close to family. She was looking for a change after working for several years in Maui.

Less than a year later, Hempstead is now director of operations for Whistlin’ Jack’s Outpost and Lodge, playing an instrumental role in a significant update of the popular resort at 20800 State Route 410, the first business east of Chinook Pass. The Williams family, longtime owners, sold the resort to an ownership group of Yakima and Seattle-area residents in early 2020.

It’s been a role that’s come with plenty of challenges: Hempstead started at Whistlin’ Jack’s in November, just as the state imposed new COVID-19 restrictions. That meant Hempstead was shifting gears: In January, she and the staff reopened the restaurant, seating people in a heated tent in the parking lot.

But the challenges haven’t dampened Hempstead’s enthusiasm for the job. Instead, it’s made her more determined.

“I’m committed to seeing this place be the best it could be,” she said.

Nearly all the restaurants, campgrounds, retailers and other businesses along the eastern part of State Route 410, also known as the Chinook Scenic Byway, are receiving updates and renovations thanks to a new group of owners, whose length of ownership ranges from a few months to a few years.

Those updates are occurring as more Americans are eager to travel and explore new parts of the U.S., especially as international travel remains limited during the ongoing pandemic.

“This is the summer of the Great American Road Trip,” said John Cooper, president of Yakima Valley Tourism. “There are a lot of people out (on the road), and many of them are visiting national parks and iconic attractions across America. A lot of them are seeking off-the-beaten-path (locations) rather than interstates.”

Cooper said the Chinook Scenic Byway, one of 150 roadways nationally with the federal designation, is a crucial asset for the Yakima Valley.

One of the Valley’s key draws for tourists is outdoor adventure and recreation, Cooper said. The Chinook Scenic Byway provides access to Mount Rainier National Park, and there are opportunities for hiking, fishing and camping along the eastern portion of the pass.

Also promoting the roadway and its various destinations is the Chinook Scenic Byway nonprofit, which aims to promote and protect the natural assets of the roadway.

The road east of Chinook Pass provides access to Mount Rainier in the summer, when the pass is open, and has national forest lands. Many people head east to access fruit stands in Naches and the wineries in the Yakima Valley, Cadematori said.

The Chinook Scenic Byway organization has recently focused on new signage marking the roadway’s federal designations as both a National Scenic Byway and an All-American Road. The group plans to start with a sign near Enumclaw, west of Chinook Pass, and eventually add other signs.

Cadematori, who operated the Alta Crystal Resort for 20 years before selling it to new owners, said the businesses along State Route 410 would benefit from new ownership.

“They can put more energy (into the businesses),” he said. “Some places need more investment and new capital.”

He also notes the new owners of these businesses have had a prime opportunity to reintroduce their businesses to new and returning tourists alike.

“It’s been a banner year for tourism in our area, for the outdoors along the byway,” he said. “People want to get out of cities; they want to get in nature,” he said.

Indeed, demand has been strong at Elk Ridge Campground, which offers a mix of RV sites, tent sites and cabins. Owner Timothy Hoefer said he has bookings as far out as 2027.

Hoefer spent many summers camping in the Nile area as a child and dreamed of one day living along 410 full time.

In 2014, Hoefer looked into purchasing a business in the area. He ended up camping at Elk Ridge Campground every weekend that summer and fall. He took over the business in January 2015.

Hoefer has spent the last several years updating the property, and over time the campground started attracting more customers.

Hoefer said he’s excited about new owners at the other businesses along the Chinook Scenic Byway. He even met with the new owners at Whistlin’ Jack’s to discuss his experience running Elk Ridge.

People were surprised Hoefer was willing to chat with “the competition,” but Hoefer doesn’t see it that way. He believes there’s plenty of business to go around, and it’s not unusual for those gathering for family reunions or other events to end up at nearby campgrounds or other lodging along the pass if there isn’t room at his campground.

And since his campground doesn’t have a restaurant, those staying there often head to nearby restaurants such as Gold Creek and Mountain Momma’s Home Cooking at the Squaw Rock RV Resort and Campground.

“You have several different options to choose from,” he said.

Those staying at the Elk Ridge Campground gained another restaurant option with the reopening of The Woodshed Restaurant at Eagle Rock Resort, which was purchased by new owners earlier this year.

Owner Josh Kane grew up in San Diego but often traveled around Washington state with his mother. Many of those trips involved driving on the Chinook Scenic Byway.

Many decades later, his mother, who moved to Washington state a few years ago, was again driving along the Chinook Scenic Byway. During that trip, she stopped at the store at Eagle Rock Resort a few miles west of the junction of State Route 410 and U.S. Highway 12, which goes west toward White Pass.

It was during that visit that she learned the resort was for sale. The general store was the main business operating at the resort. The popular Woodshed Restaurant had closed several years earlier.

Kane, who is a financial adviser in Santa Barbara, Calif., decided to purchase the resort, and took over in February.

“We looked at it and saw it as a great opportunity,” he said.

Kane was drawn to the multiple businesses within Eagle Rock. The resort offered RV sites, tent sites and cabin rentals. And he was eager to reopen The Woodshed Restaurant.

Within a few months, Kane, with the help of his mom and a longtime employee, ramped up activity at the resort. He hired new workers to maintain the various parts of Eagle Rock, increased the general store inventory, and worked on renovating four cabins.

The last major task was reopening the restaurant. It had been closed for several years, which meant hiring new staff, including a new chef to run the restaurant. The restaurant held an outdoor barbecue during Memorial Day to test point-of-sale equipment and introduce customers to its offerings. The restaurant officially opened June 7.

And in just a few weeks, the restaurant has gained regulars. Kane said two customers from Yakima now make the drive up often to get the restaurant’s macaroni and cheese.

“The community support has been great,” he said.

And he’s eager to keep that community support going through the off-season when Chinook Pass is closed, limiting access from Western Washington. Kane said he’s working with staff to figure out different promotions — such as offering a discount for residents — that would keep people coming to the resort during the winter months.

Kane said they’re also planning events for what’s left of the summer, such as concerts and movie nights, to make the resort more of a destination for locals and visitors alike.

Whistlin’ Jack’s has had a busy summer as well. The resort’s cabins and motel rooms have been fully booked for entire weeks at a time.

The boost in business is welcome, but Hempstead, the director of operations, said it has come with challenges.

The resort has 40 employees, fewer than the 75 workers needed to run the different aspects of the resort, which includes a motel, cabins, RV sites, the restaurant, a gas station and a market.

Employees are trained in several areas. People in the restaurant can book lodging reservations, and those working in the market can help out in the restaurant in a pinch. And when those workers need time off, it’s not unusual for Hempstead or other managers to take over that worker’s job for the night.

Through those efforts — as well as paying a lot of overtime — Whistlin’ Jack’s has been able to keep the restaurant and other businesses open seven days a week, providing additional opportunities to attract customers driving by.

Still, there have been times where customers have been impatient with staff, prompting unpleasant confrontations.

Those experiences prompted Hempstead to type a note that she places on every table that asks customers to be understanding. Hempstead said that while she and the staff are committed to providing excellent service, she doesn’t tolerate people yelling at her workers.

“I would rather lose five patrons than one great employee,” she said.

Over time, different parts of Whistlin’ Jack’s have been renovated. The job is far from done, but substantial progress has been made since the new owners took over in early 2020. All the rooms and cabins have received new beds and hot tubs. Several of the popular cabins have been renovated. The restaurant has received interior updates, including a refresh of the gift shop. The convenience store’s inventory has been expanded to include camping gear and gourmet food items. The gas pumps have been replaced and now accept credit cards.

Hempstead said she’s hoping to get more work done in the slow fall and winter months when Chinook Pass is closed. “We have big plans for the place,” she said.

She also wants to find ways to increase the customer base during the winter months. She wants to draw those who are on the pass during the off-season, namely hunters in the fall and snowmobilers and cross-country skiers in the winter.

“There is so much potential,” she said.

The range of ownership for these new business owners is from several months (Eagle Rock Resort) to several years (Elk Ridge Campground).

Also on State Route 410 is American Homestead, a 220-acre property. The Forgey family rents out the property for events and also offers cabins for rent.