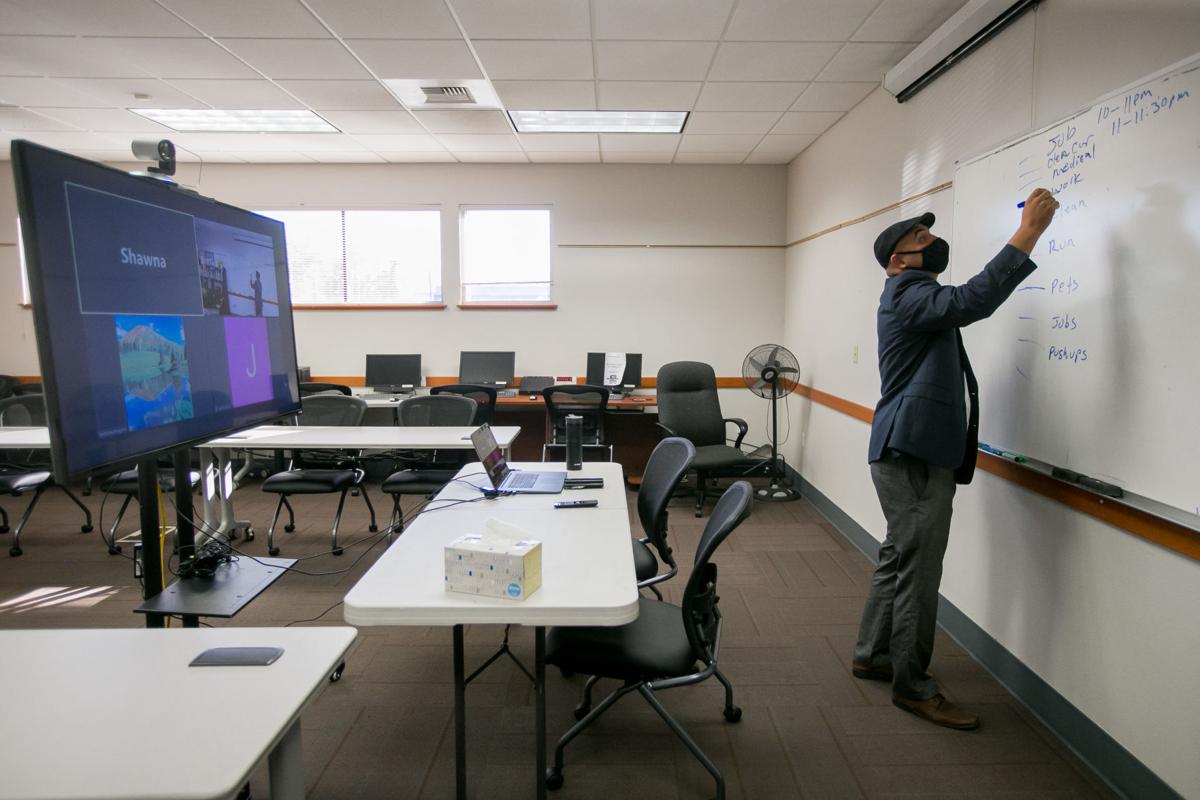 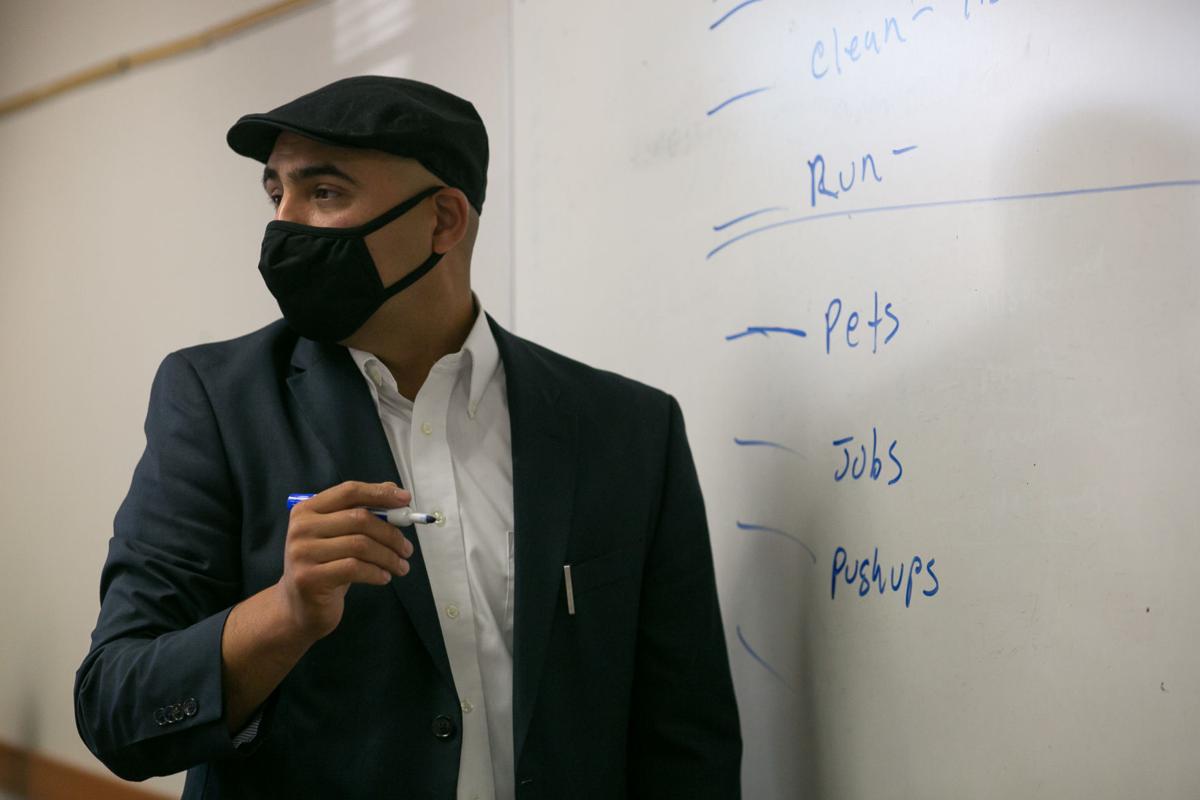 Instructor Gabriel Munoz engages with his students about creating a daily schedule during a virtual life skills course via Zoom Thursday, Aug. 27, 2020, in a job training classroom at People for People, 304 W. Lincoln Ave. in Yakima, Wash. 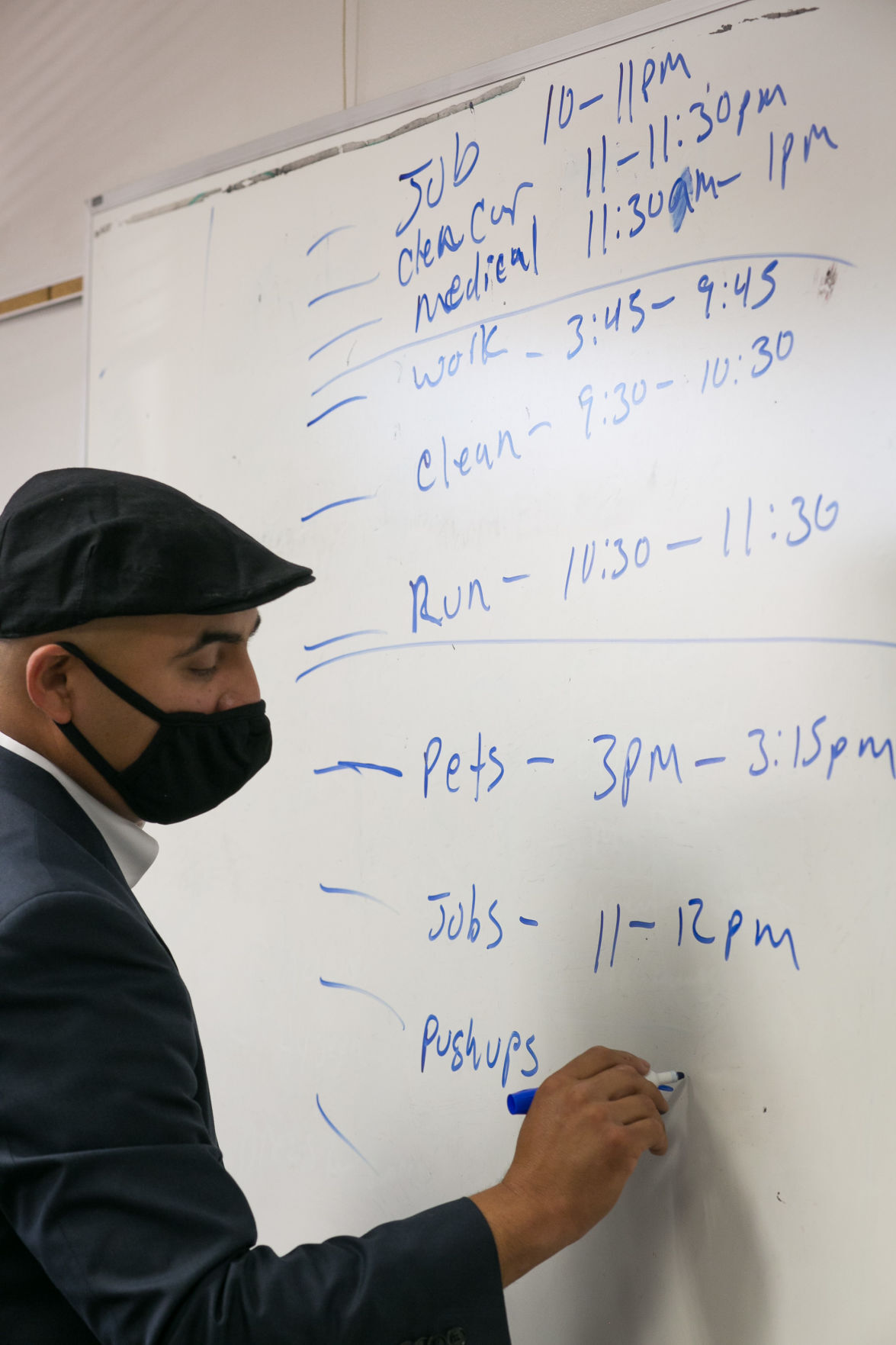 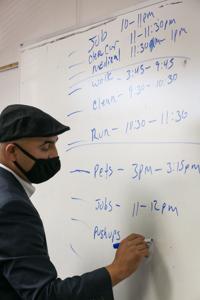 As his students share their list of priorities, instructor Gabriel Munoz writes a lesson plan on a white board during a virtual life skills course via Zoom Thursday, Aug. 27, 2020, in a job training classroom at People for People, 304 W. Lincoln Ave. in Yakima, Wash. 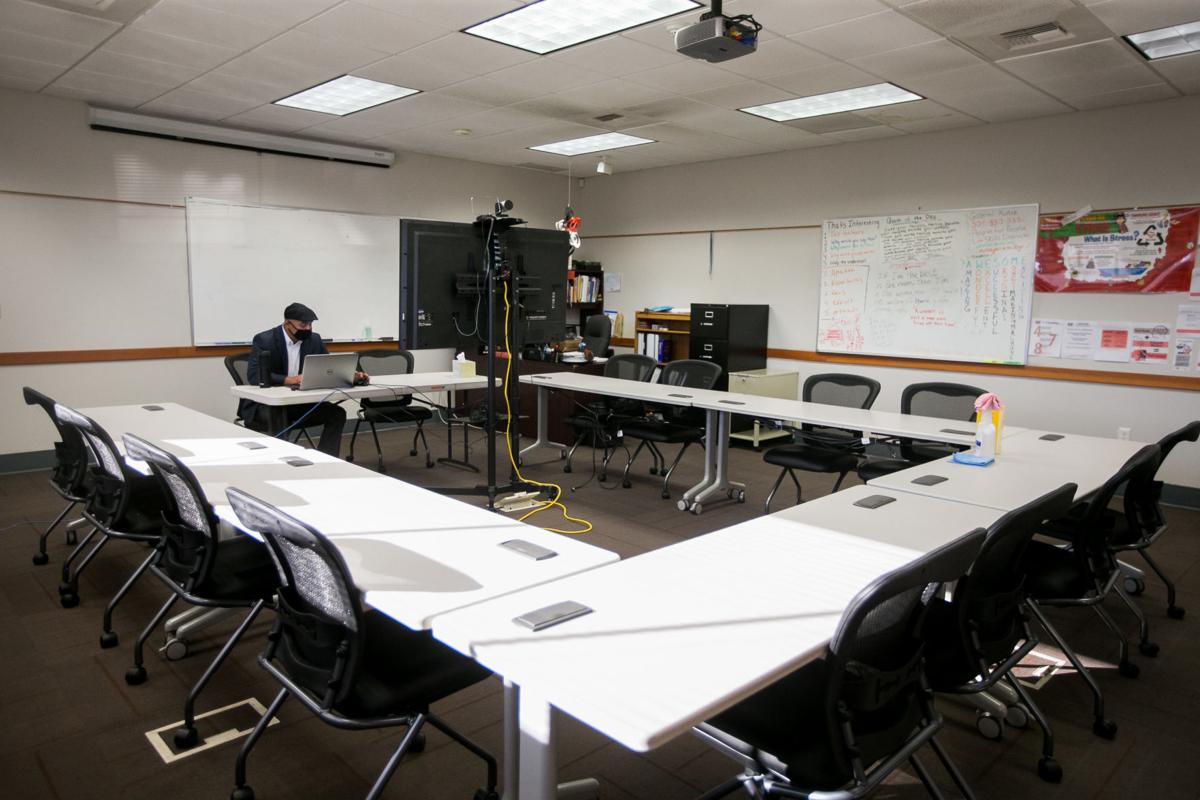 Instructor Gabriel Munoz prepares to lead a virtual life skills course via Zoom Thursday, Aug. 27, 2020, in a job training classroom at People for People, 304 W. Lincoln Ave. in Yakima, Wash. Normally this classroom would sit around 12 students, but due to the coronavirus pandemic, all job training classes at the agency are taught virtually.

Instructor Gabriel Munoz engages with his students about creating a daily schedule during a virtual life skills course via Zoom Thursday, Aug. 27, 2020, in a job training classroom at People for People, 304 W. Lincoln Ave. in Yakima, Wash.

As his students share their list of priorities, instructor Gabriel Munoz writes a lesson plan on a white board during a virtual life skills course via Zoom Thursday, Aug. 27, 2020, in a job training classroom at People for People, 304 W. Lincoln Ave. in Yakima, Wash.

Instructor Gabriel Munoz prepares to lead a virtual life skills course via Zoom Thursday, Aug. 27, 2020, in a job training classroom at People for People, 304 W. Lincoln Ave. in Yakima, Wash. Normally this classroom would sit around 12 students, but due to the coronavirus pandemic, all job training classes at the agency are taught virtually.

  year ago, Christine Cote, president of Perry Technical Institute, said she would have been quick to answer the question of whether the school could do all its instruction entirely online.

“We would have said no,” she said.

And for good reason: Many of Perry’s programs, such as welding and heating, ventilation and air conditioning, or HVAC, require hands-on training.

But for nearly two months, career and technical programs at Perry Technical Institute were all online as the region grappled with the COVID-19 pandemic.

Like everyone else, administrators and instructors of local job and career programs had a sharp learning curve after the pandemic forced them to end in-

person instruction and shift to the virtual environment.

Now Cote has a different answer as to whether the school could do instruction entirely online.

“We know we won’t miss a beat,” she said. “We’ll be up and running remotely the next day.”

Like local schools, job training programs took to tools like Microsoft Teams and Zoom to conduct lectures and one-on-one meetings. The more significant challenge was figuring out how to translate hands-on learning experiences for the virtual environment.

Perry Technical Institute leaned on its faculty and instructors to come up with creative approaches. Cote recalls how one HVAC instructor demonstrated concepts with the HVAC system at his home. He then encouraged students, with guidance, to work on the HVAC systems at their own homes.

The classroom component of apprenticeship programs through the Aerospace Joint Apprenticeship Committee, or AJAC, which runs programs for both adults and youth in the Yakima Valley, went virtual, said Heather Collins, regional program director for AJAC based in Union Gap.

For units that involved more hands-on learning, AJAC found a workaround: They were able to mail project kits that consisted of parts and other components.

For apprentices who lived in rural areas and didn’t have access to high-speed internet, AJAC made printed materials that could be completed and sent to instructors.

“We wanted to make sure there’s equal access,” she said. “It’s really important in this area.”

At People for People, instructors have found effectiveness in smaller groups or one-on-one meetings, along with large group instruction, to do specific job training programs, such as one that provides instruction on writing resumes and conducting a successful job search.

Instructors have also had the task of making participants feel more at ease about the distance learning setting.

That may mean guiding participants, step by step, to not only learn how to use the software but how to remain focused when there’s an issue, such as a problem connecting to the internet, said Cindy Maib-Robinson, employment and training director for People for People.

“Those who aren’t particularly great online learners have to be coached and nurtured,” she said.

In recent months, some career and technical programs have been able to resume some in-person lab or hands-on training. Still, like everything else, it was done with numerous restrictions that included lower student capacity, wearing masks and daily temperature and health screenings.

Perry Technical Institute has noticed a dip in enrollment for its current quarter, which started in June. A few weeks prior, the school received state approval to resume in-person instruction with restrictions.

With a drastic rise of new COVID-19 cases at the time — in June, the county was seeing more than 200 new cases in a single day — some students might not have felt comfortable starting a program, even with all the safety measures in place, Cote said.

Others just wanted to wait a few more months before deciding to enroll, she said. For the next quarter, which starts in late September, enrollment is higher.

“I think the higher number (of potential students) just wanted to wait and see what was going to happen,” she said.

“You can do a lot of it online, but there are some hours that still have to be done in person,” said YVC President Linda Kaminski.

Most instruction is still online, and those who must be on campus for lab work are under several restrictions, including having to fill out a survey of health conditions before entering and then providing information on campus activity once they leave.

“It’s not just business as usual,” she said.

Enrollment for the upcoming fall quarter, which starts in a few weeks, is in line to be similar to this time last year and potentially could be higher, Kaminski said.

With many four-year universities doing distance learning, some may opt to enroll in community colleges to save money and live at home. Kaminski said some of the newly registered students may be those who had lost jobs, but it is too early to know for sure.

Perry Technical Institute’s job placement numbers did take a bit of a hit as employers had to shut down businesses and lay off workers.

In January, that placement rate was 92%. As of last week, it was 87%. With many of the programs involving positions deemed essential, many students have still been able to secure jobs.

Cote said while it’s not as high in the past, it’s still high enough to make the school more attractive to those who have lost jobs during the pandemic and have been unable to secure unemployment quickly.

“Typically, in times of recession, people want to come back to school and get retrained,” she said.

Meanwhile, there are other job career programs in the works locally.

Yakima Valley College hopes to launch a one-year nursing program during the winter quarter. Under the program, students receive certification as a licensed practical nurse, or LPN. This would be a different program from the college’s associate degree in nursing, which is required for a registered nurse position.

The program would be the only one of its kind in Eastern Washington, Kaminski said.

The program has been in the works for a year, but COVID-19 caused some delays as those who would be qualified to run the program or provide instruction were busy working during the pandemic, Kaminski said. YVC was finally able to hire a nurse to develop the program, along with several additional instructors this summer.

Additional instructors mean the school can enroll more students for all its nursing programs, which is good news for health care facilities in dire need of nurses, especially during the pandemic, she said.

“We were turning away people every year,” she said.

Meanwhile, AJAC, which had been running apprentice programs, will launch Manufacturing Academy, a pre-apprentice program, in Yakima next month. The program will be 100% remote. Participants will receive a technology kit, which includes items such as headphones and a microphone, and educational materials in the mail.

During the 11-week training program, participants will learn basic manufacturing skills, including automation, blueprint reading and precision measuring. By the end of the program, students will secure new skills and certifications that AJAC officials hope will lead to a formal apprenticeship program or an entry-level manufacturing job.

The training will be offered at no cost thanks to partnerships with community agencies and organizations, such as the South Central Workforce Council, Collins said.

The program had previously been offered in-person in several communities in Western Washington, but AJAC, with Collins’ coordination, was able to move 100% online.

Collins said COVID-19 created plenty of challenges, but it also presented opportunities for AJAC and other organizations to find a new way to reach people in need of job training.

“We can open to a larger geographical area and serve more rural areas that we may not have served before,” she said.

Typically, those who file for unemployment must be searching for work or enroll in a job training program to continue receiving benefits.

But a suspension of that requirement has been in place since March. The suspension is set to end Tuesday, but Gov. Jay Inslee could extend it, as he’s done several times before.

There still has been interest in both short- and long-term training programs, but not at the same levels before the COVID-19 pandemic, wrote Jack Fitzgerald, executive director of the South Central Workforce Council, in an emailed response to the Yakima Herald-Republic. The agency coordinates efforts to develop the workforce in Yakima, Kittitas, Klickitat and Skamania counties.

That decreased interest could also be due to the closure of access points, such as the local WorkSource office, where people would have received information about training opportunities.

“While we are marketing job training and training opportunities on the radio and through social media, we just don’t see many people reaching out,” Fitzgerald wrote.

Cindy Maib-Robinson, of People for People, said some might decide not to search for work or get training for now. Some may fear getting ill in a new job or need to deal with other challenges that have come up during the pandemic, such as helping children navigate distance learning while schools are closed.

“I think people have needed this time to figure things out,” she said.