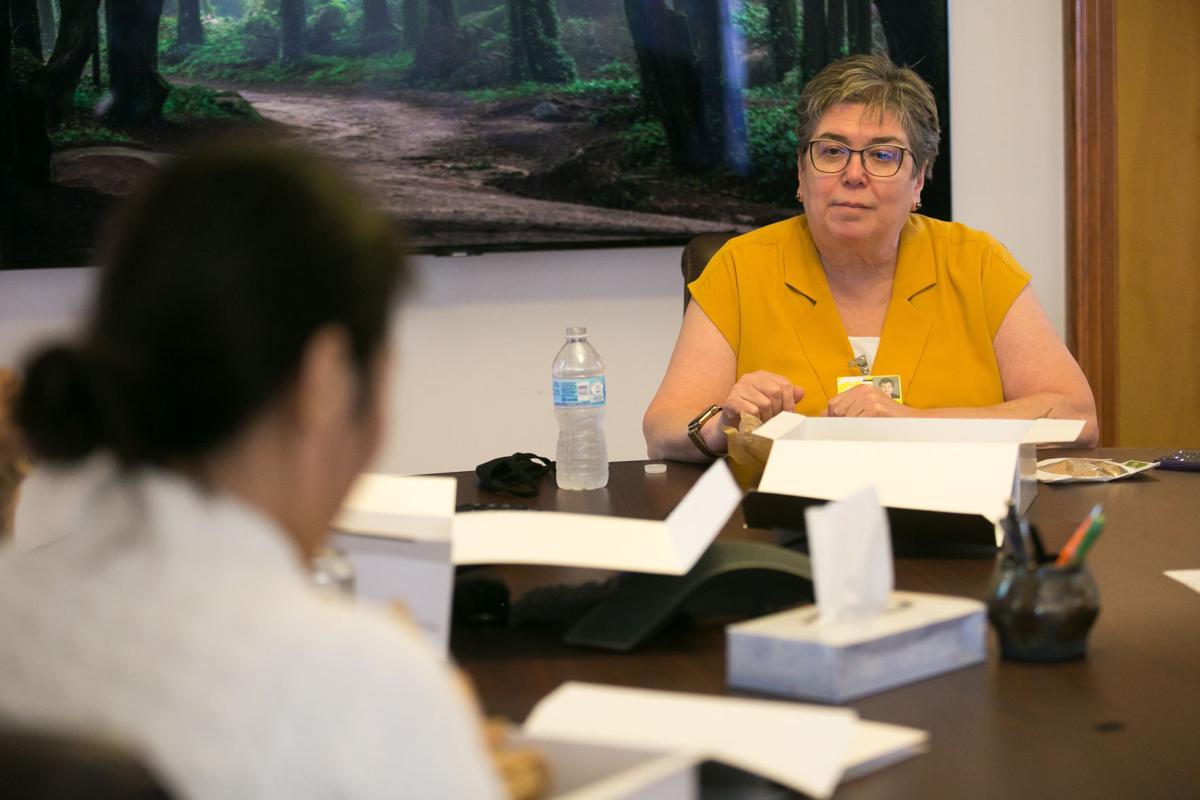 Rhonda Hauff, the new CEO at Neighborhood Health, interviews a prospective provider candidate during a lunch meeting Thursday, Oct. 8, 2020, at the Richey House in Yakima, Wash. 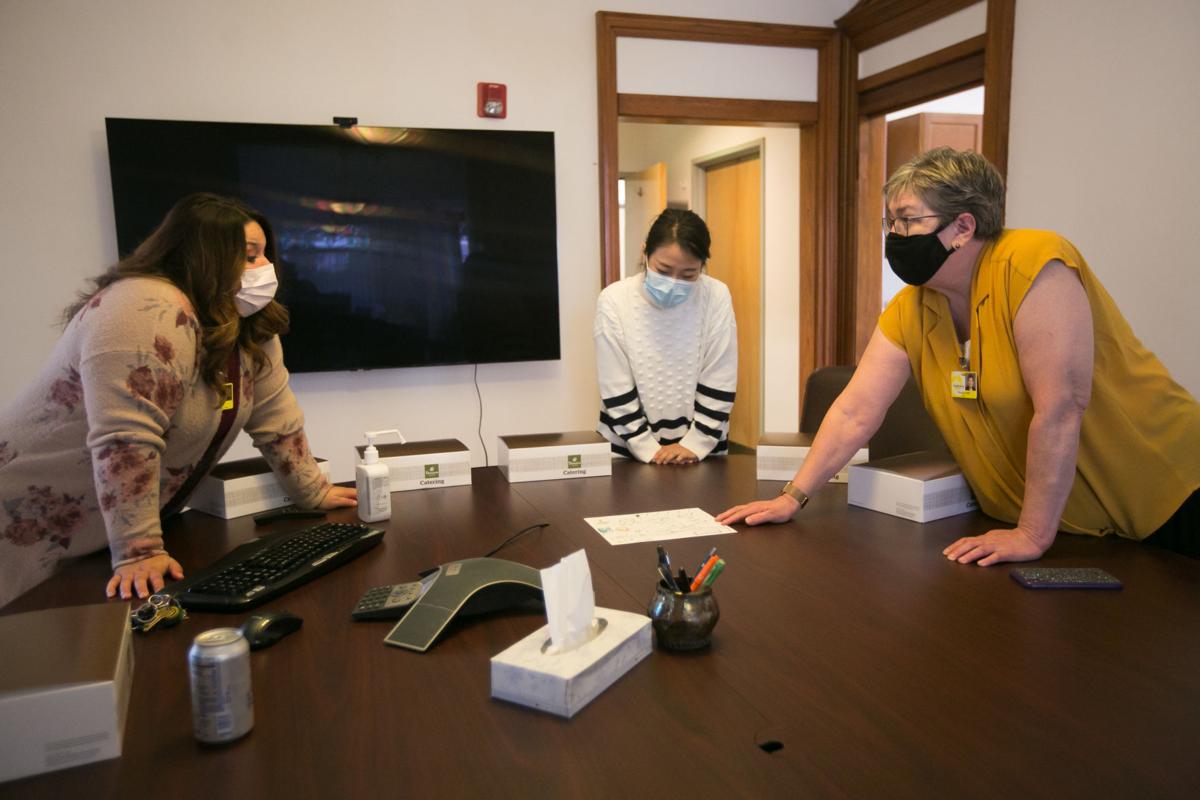 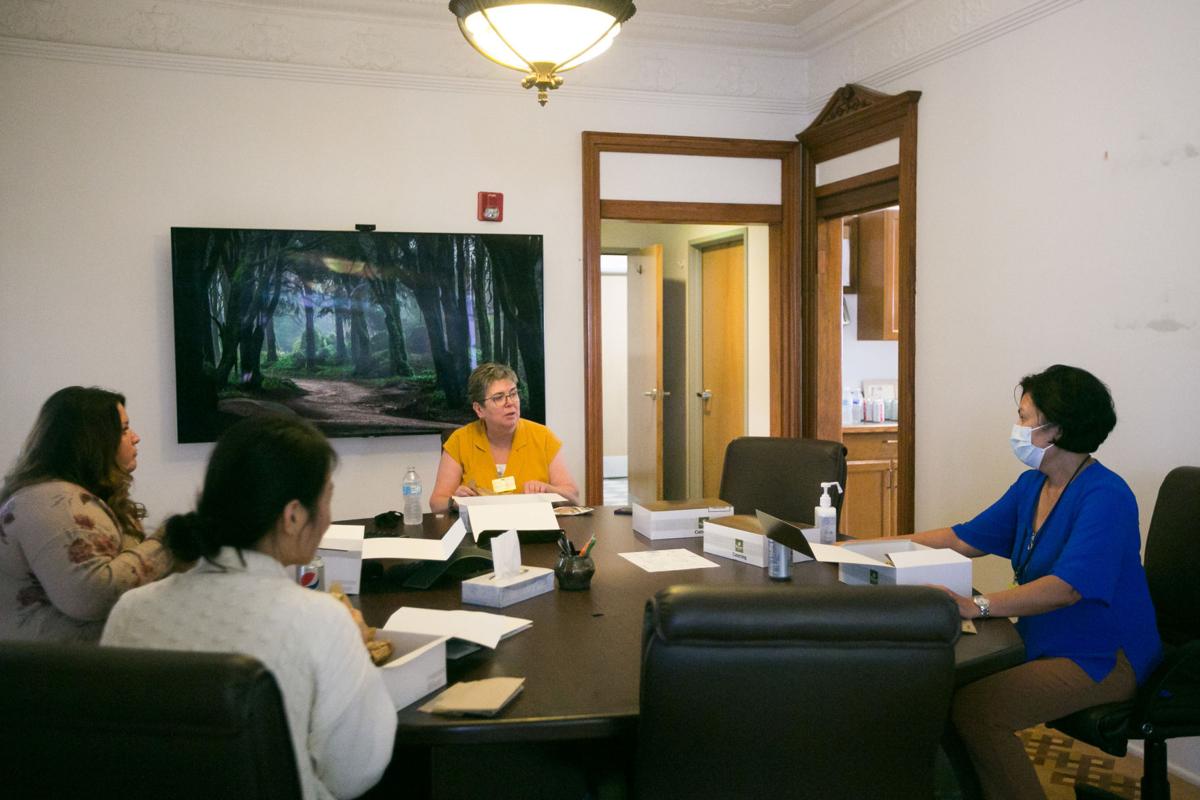 Rhonda Hauff, the new CEO at Neighborhood Health, interviews a prospective provider candidate during a lunch meeting Thursday, Oct. 8, 2020, at the Richey House in Yakima, Wash.

Many of the buildings of Yakima Neighborhood Health Services are named after the organization’s figures.

The entire east Yakima campus of the community health center is named after Anita Monoian, who retired as CEO last month after more than four decades.

The Hinman building on East Yakima Avenue, which once housed a financial firm, is named after Don Hinman, a founding board member and current chair of the board of directors.

Yet another building named after a critical figure at Neighborhood Health: The Rhonda D. Hauff Resource Center. Once a market, the center at 201 S. Sixth St. provides temporary housing for the homeless and provides case managers to connect the homeless to services, including health care, long-term housing and employment.

With Hauff’s initiative, Neighborhood Health has been expanding its services for the homeless population for the last 13 years.

Earlier this month, Hauff, who had served as deputy CEO, rose another step to the CEO position after Monoian’s retirement.

Monoian was instrumental in the massive growth of Neighborhood Health — over four decades, the organization went from serving a handful of patients a day to nearly 93,000 patients in a single year.

Hauff will likely be instrumental in not just continuing Neighborhood Health’s growth in the number of patients it serves but in the breadth of services it can offer, especially to key populations such as the homeless, older adults and Latinos.

“Social determinants really affect a person’s health,” said Bob Marsalli, CEO of the Washington Association of Community Health. “Eighty percent of health is determined in the environment they live in, and 20 percent is determined in access to health care services.”

“The group said, ‘We need a place when we’re sick,’” Hauff said about a focus group of homeless residents in the organization. “When you go to the shelter, it’s rise and shine, and you have to leave.”

That led to the organization partnering with other agencies to offer not just health care services, but behavioral health services and temporary housing.

It’s an effort that others in the community health center world have noticed, and it has installed a confidence that Hauff will enable Neighborhood Health to keep moving in a forward direction.

“I think Rhonda Hauff is going to do outstanding work following in those footsteps,” Marsalli said. “Rhonda has been a loyal lieutenant and innovator for years. She’s been supported by Anita to be bold and move forward.”

In Hauff’s first week as CEO, she did one key thing: change several employees’ roles. Some were promoted to higher-level administrative positions, and several were promoted into supervisory roles.

Hauff wanted to lean into the experience of long-time employees — about 15 people have been with the organization for at least 25 years — and those involved in key areas of the company, including behavioral health and housing. Those with experience and expertise needed to have a seat at the administrative table.

“We’re trying to bring that to our management team and have them in decision making,” Hauff said. “We can see how each team can impact the greater system.”

Another critical initiative Hauff will be starting is yearlong training for the 30 people in administrative and supervisory roles for trauma-informed care. The strategy is one aspect of improving patient-centered care through having a better understanding of what the patient is going through and to meet them where they are, Hauff said.

“We have a very diverse population not only among the patients we serve but in our staff,” she said. “We want to be consistent in the quality of care we serve. We need to meet the needs of the patient and be culturally competent.”

Hauff has started her tenure as CEO of Neighborhood Health as the Yakima Valley, and the nation, face numerous issues.

The COVID-19 pandemic, of course, is among the top priorities. In the last several months, the organization had set up outside clinics, created a telehealth program, and provided best practices on home diagnosis to ensure patient, staff and providers’ utmost safety during care.

COVID-19 has also created new demands among its adult patient population. Initially, those patents weren’t vising their doctor during the pandemic. Eventually, though, they have come back, and the organization has found itself having to treat many chronic conditions, Hauff said.

The organization has also had to increase outreach to children to encourage them to get vaccinations.

“The times we’re in have brought a new focus that all of our leadership is working on right now,” Hauff said.

The other issue that Hauff will potentially face is the potential repeal of the Affordable Care Act. There has been widespread fear that the future makeup of the U.S. Supreme Court, with Amy Coney Barrett likely having her nomination approved, could mean the end of “Obamacare.” Health care advocates fear that could leave millions, including many thousands of residents in the Yakima Valley, without health insurance.

Hauff remembers a time when residents couldn’t afford private care but weren’t eligible for government-funded insurance, either: “That’s a huge chunk of our population that could lose coverage. We’re going to continue to be active in advocating for the Affordable Care Act.”

The state might be able to preserve some coverage if the ACA is repealed or scaled back, but that’s not a guarantee given ongoing budget challenges, Hauff said.

The end of Obamacare could be devastating to certain parts of Neighborhood Health’s patient base, such as the homeless, which makes up 14% of the people the organization serves.

“They have been able to receive services because of the Affordable Care Act,” she said. “They didn’t seek services before. They were going to the emergency room. That’s going to be potentially a huge loss.”

Earlier this year, Neighborhood Health’s board and administration worked on the organization’s strategic plan. The session happened in early March, a week before the pandemic hit the Yakima Valley.

For Hauff, it’s a reminder not to lean too much on any “plan.”

“It’s a dynamic organization,” she said. “My five-year plan could change overnight. Partially because of what’s happening politically. We didn’t predict COVID-19.”

That said, specific priorities are still there, such as staff development and expanding primary care for adult and senior populations.

And neither the COVID-19 pandemic nor the political climate has changed the organization’s underlying mission.

“We will grow as we’re allowed to grow,” Hauff said. “Our mission is to reduce barriers wherever possible to access primary care, because that’s the most efficient care there is.”