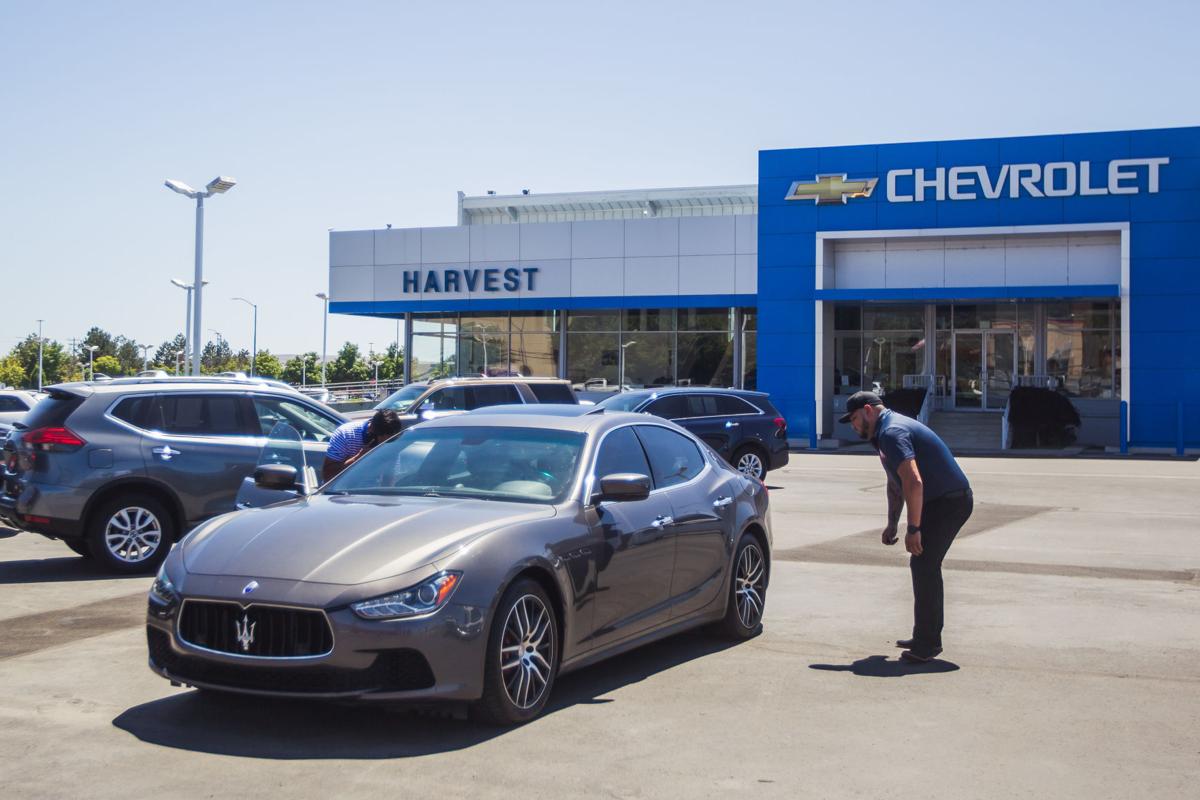 Miguel Hinojosa and Johnny Perez inspect a 2016 Maserati for a trade appraisal Thursday, June 17, 2021, at Harvest Chevrolet in Yakima, Wash. 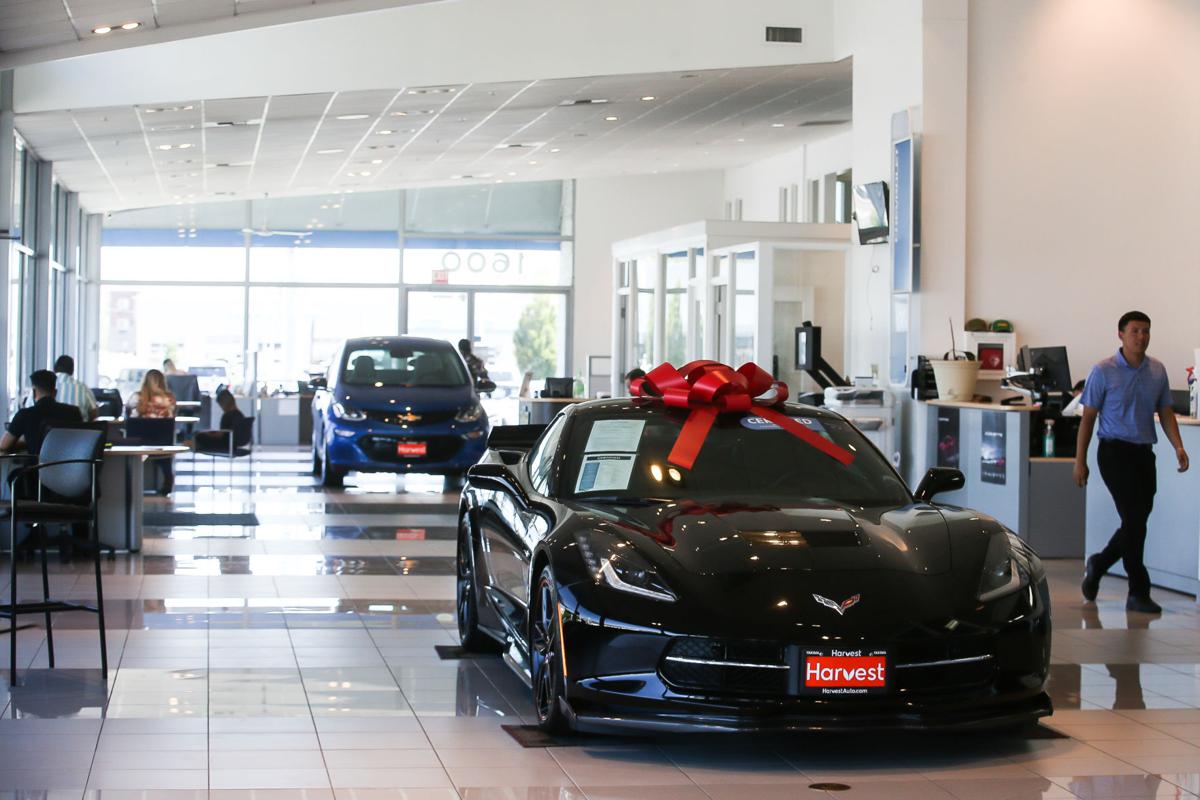 A 2017 Chevrolet Corvette is seen Thursday, June 17, 2021, inside the showroom at Harvest Chevrolet in Yakima, Wash.

Miguel Hinojosa and Johnny Perez inspect a 2016 Maserati for a trade appraisal Thursday, June 17, 2021, at Harvest Chevrolet in Yakima, Wash.

A 2017 Chevrolet Corvette is seen Thursday, June 17, 2021, inside the showroom at Harvest Chevrolet in Yakima, Wash.

Usually, Harvest Chevrolet in Yakima would have at least twice the number of new cars than used cars on its lot.

But these days there are many more used cars as the dealership, like many others, has received fewer new cars in recent months.

The dealership is still selling the same number of vehicles as it did pre-pandemic, said general manager Dan Jolley: “We’re sucking up all the inventory and depleting the inventory of new cars.”

What’s happening at Harvest Chevrolet and other dealerships across the country reflects a resurgence of consumer demand in the past year, along with car manufacturers’ inability to ramp up production to keep up with demand.

A global shortage of semiconductor chips needed for various car features is driving production struggles. Car manufacturers canceled orders during the pandemic and are now paying the price. They did so for a good reason, however: They anticipated a drastic drop in car sales based on past economic slowdowns.

While sales dropped initially, they quickly rebounded due to pent-up demand. But when manufacturers tried to resume activity, they found themselves in a battle for chips with companies producing not just vehicles, but phones and computers.

Some dealerships were not as affected. Hyundai of Yakima has continued to get shipments every other week, said sales manager Brandon Pittman.

The dealership has benefited from a bit of foresight on the part of the Korean vehicle manufacturer, which has plants in the U.S. Earlier this year, Reuters reported that Hyundai had not only continued purchasing chips during the COVID-19 pandemic but increased purchases toward the end of the year.

However, Reuters’ recent reports indicate that Hyundai’s stockpile is dwindling and the company is starting to feel the effects of the global shortage, leading to some plant shutdowns in Korea.

For now, that hasn’t trickled down to the Hyundai dealership in Yakima, which has been able to maintain about 40 new vehicles at any given time.

Jolley said that in the past the dealership’s customers purchased a vehicle either by picking one on the lot or custom ordering a car that would arrive several weeks later.

But now, with the current shortage of new cars, a third option has emerged: Customers are buying cars en route from the manufacturer to the dealership. The vehicle is picked up by the customer rather than parked on the lot.

For example, a customer came to the dealership a few weeks ago. He didn’t find anything on the lot he liked and opted for a Silverado truck that was on its way.

Securing a car before its arrival to the lot is like a real estate agent letting the customer know of a home that will be available before it’s officially listed on the market.

“This scenario — where people are buying the car they did not order and is not here yet — is very new to us,” Jolley said.

While the purchase is made sight unseen, the customer receives plenty of information about the vehicle and may also have an option to test drive the car — usually the same model but a different year or version.

And if ultimately the customer doesn’t want the car, it remains on the lot.

“In the circumstance that something happens, and they decide they don’t want to buy the vehicle, we honor that,” Jolley said.

Since the semiconductor chips are used for certain features, such as adaptive cruise control, that might mean the new trucks are base models, which still sell well, said Jim Peterson, owner and general manager of Lee Peterson Motors in Yakima.

“It’s not a perfect scenario, but we’re happy to offer at least some trucks,” he said.

Like Harvest Chevrolet, Lee Peterson Motors is selling cars before they show up at the lot. When the dealership is invoiced by the manufacturer, the vehicle shows up on the dealership’s website.

Savvy customers have been able to identify those vehicles and then secure the car before it arrives.

“That’s why you see all these new-car lots are almost vacant,” he said. “They’re selling their stock before it ever hits the ground.”

Harvest Chevrolet has stocked up on its used car inventory with fewer new cars on the dealership’s lot. And to get those cars, the dealership has been paying more, both for trade-ins and purchases.

Jolley said he couldn’t provide an exact figure but said the increase in how much it paid for used cars was “substantial.”

Pittman of Hyundai of Yakima said the price that dealerships like his are paying for used cars can vary depending on the model and age of the vehicle, but that in general they’ve increased upward of $1,000 to $1,500 over the past six months.

Peterson said his dealership pays upward of 20% more for those trading in their current vehicle when purchasing a new car.

As a result, it costs more to buy a used car: According to the Bureau of Labor Statistics consumer price index, used car and truck prices increased by about 30% between May 2020 and May 2021.

Jolley said there are indicators that manufacturers are adjusting and are taking on different methods to secure chips and increase manufacturing activity. Still, he expects that it will take some time to restore the new car inventory at local dealerships.

“We’ll just adjust our business and continue to provide inventory, whether new or used,” he said.

Peterson of Lee Peterson Motors said customers who are seeking a car might have to more active to ensure they get the car they want. The demand is so strong for new cars that he’s gained customers not only from the Yakima Valley, but across the U.S.

“When (buyers) set their sights on something and they find it in Yakima, they’ll come in and get it,” he said.

This story was edited to revise the headline. A global chip shortage, not storage, is impacting car dealership inventory.