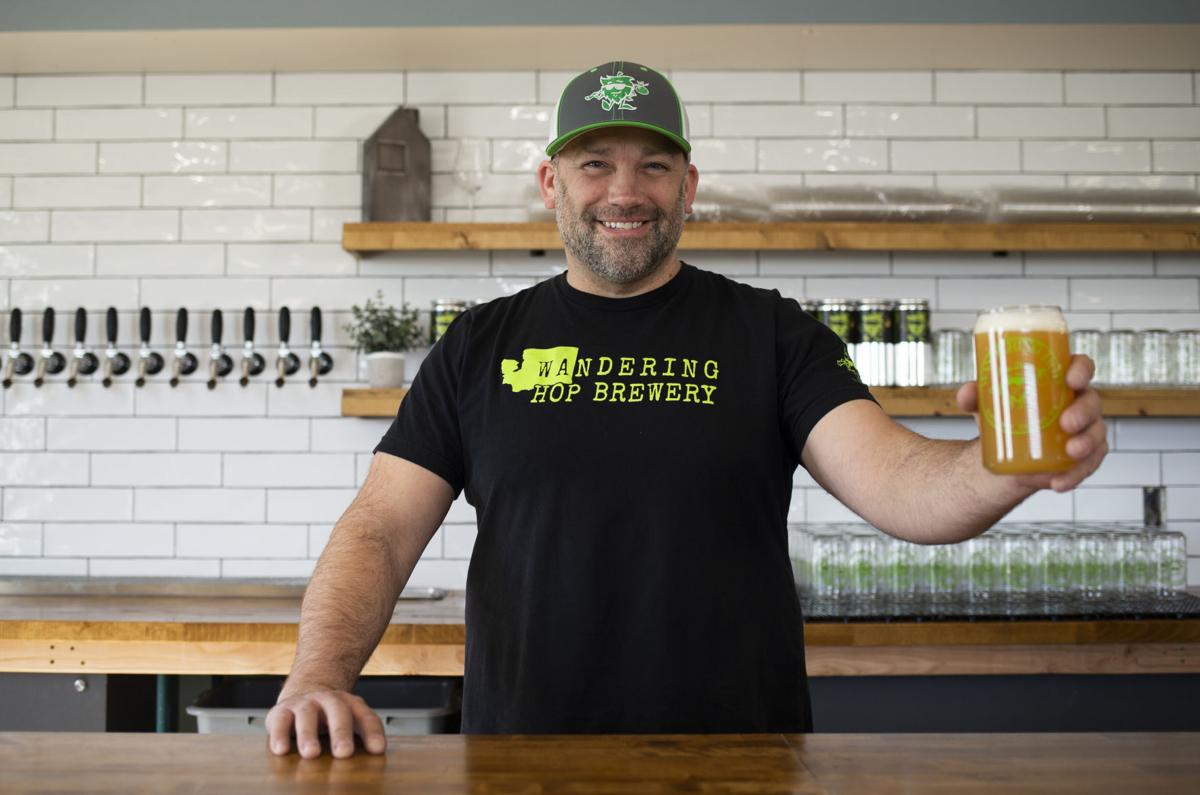 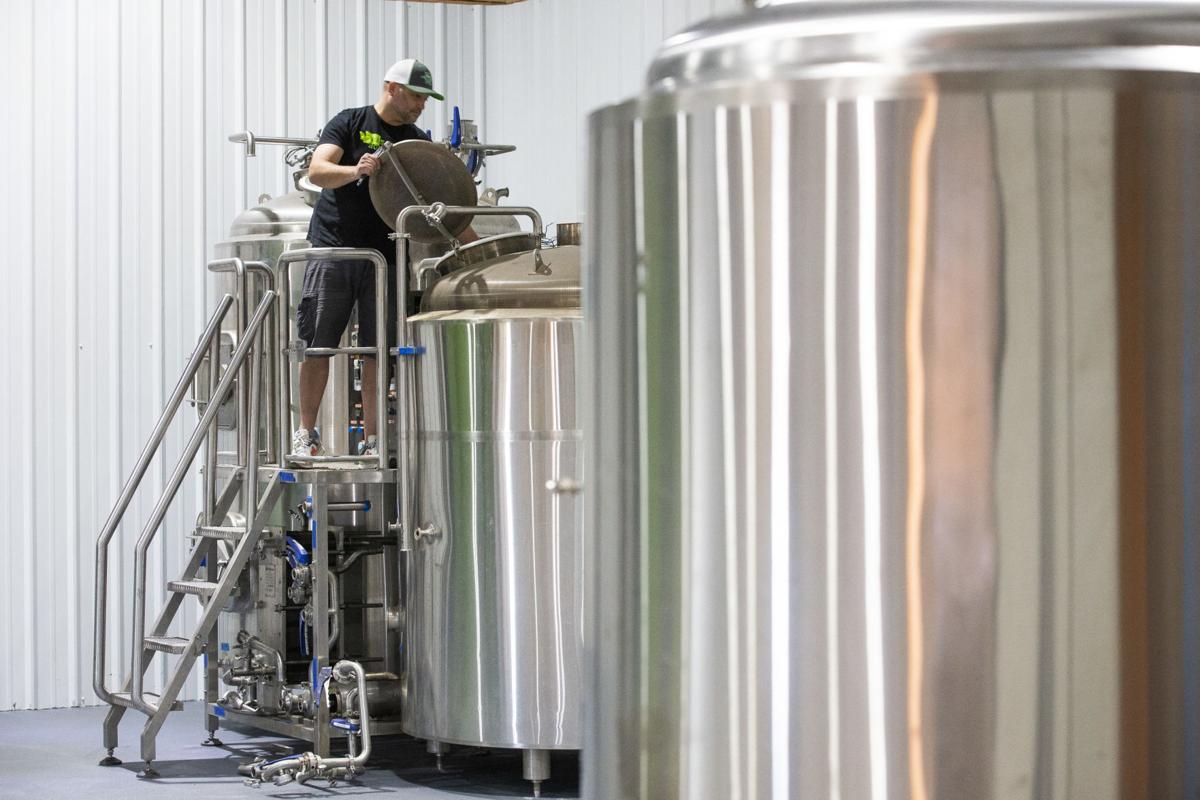 Nathan Cooper, 36, opened Wandering Hop Brewery in 2017 when the Yakima-area craft brewing scene was growing significantly. Cooper, like many other brewery owners, started homebrewing on the side.

Cooper’s development of the brewery at 508 N. 20th Ave. included a cross-country trip with his wife, Whitney. They visited roughly 80 breweries to get ideas and inspiration.

After nearly four years in business, Cooper is now looking to be part of another new craft beverage scene. He’s close to completing a second location at the former Wineglass Cellars site in Zillah and hopes to open by late April.

In this month’s Checking In, we talk to Cooper about how he’s dealt with COVID-19 restrictions, what drew him to the Lower Yakima Valley and how a birthday cake helped his brewery find its niche.

How did the pandemic impact your business, both for the day-to-day operation and your long-term plans?

When the first indoor dining closure announcement came, we were immediately forced to pivot and develop a new strategy for survival. I have an IT background, which allowed me to immediately create an online store to offer beer and food-to-go options. We had installed bay doors in place of our windows prior to the pandemic, and this allowed us to have a “walk-up window” of sorts.

Despite the shutdowns and dramatic decrease in sales, we continued to move forward with plans on a second location. We did dial back the amount of beer we were producing because we were no longer able to distribute to many of our customers who had to close due to the pandemic. The shutdowns allowed us to revamp our business structure and adapt to a to-go operation. We also used the downtime to work on our second location and go at a less rushed pace.

How did you stay connected with local beer drinkers when the taproom had no or limited operations?

With the to-go window, I was able to briefly chat one-on-one with our customers, hear how they were doing and tell them my plans for the unforeseen future. I stayed fairly active on social media, updating our followers of any new beer releases and how we would adapt to new rules and regulations. We also have a Mug Club that I regularly emailed with updates and insider information.

How has the pandemic changed the craft beer industry?

The craft beverage industry was hit hard by this. I’ve seen quite a few breweries close and watched industry friends lose their jobs and businesses. When indoor dining was no longer allowed, many breweries scrambled to figure out packaging solutions, which led to a can shortage. We weren’t able to get crowlers in for nearly two months. Luckily our friends at Single Hill, Valley Brewing and Blewett Brewing loaned us crowlers to stay afloat while we waited for our shipments. Now that many breweries have started canning, there is a can shortage and a significant spike in the cost of aluminum cans. What used to be readily available is now months delayed and has to be shipped from overseas at an extremely high cost.

You are opening a second location in Zillah. What drew you to the Lower Yakima Valley?

We were looking for a location that had the potential for growth and lots of space to start. Sonny, my father, was waiting for a meeting and happened to be skimming through a real estate magazine when he came across the listing for the Zillah property. We went and looked at it and fell in love with the potential it had. We had outgrown our first location on North 20th Avenue in Yakima, and Zillah offered everything we needed: parking, a large outdoor space and a huge warehouse.

We have always enjoyed wine tasting in the Lower Valley and always wished there was a brewery to enjoy during our visits. When talking with some local wineries, they all expressed a huge excitement about us coming to the area. We’re excited to carry various wines from all of our neighbors and grow the area’s craft beverage scene.

The Yakima Valley’s brewery scene has grown a lot in recent years. How would you describe your brewery’s niche and place in that scene?

When we opened, we came out with Yakima’s first Hazy IPAs and introduced the region to the idea. Traditional beer lovers scoffed at us for making such an ugly beer and weren’t huge on the concept of an unfiltered/hazy-looking brew.

For our first anniversary, I decided to toss a piece of birthday cake into a Milkshake IPA. That put us in the spotlight, perhaps not in the greatest way, but people were talking about us, and we were starting to be known for wild and creative creations. I think I showed beer consumers and others that nothing is off limits: You can toss in a whole cake (which I do yearly now), make a beer that looks like orange juice and add marshmallows and graham crackers to a brew. I’ve had a blast pairing my love for cooking with brewing.

What’s one common misconception people have about starting up a brewery?

I think the biggest misconception is it appears that it’s all fun and enjoying beer. Brewing is 90% cleaning, and there is a ton of heavy lifting involved. I always think of the popular meme of “What my parents think I do, what my friends think I do and what I actually do.”

Brewing is really hard work, especially when you have basic, very hands-on manual equipment. There is a lot of cleaning involved; since you’re essentially working with a food product, sanitation is critical. Beer festivals can be fun if you have a large staff. If not, you’re working them and watching everyone else enjoy the festivities.

Opening a brewery is also extremely expensive; the amount of stainless steel we’ve purchased is unreal. It’s not easy work by any means, but watching someone enjoy something you’ve created makes it totally worth it.