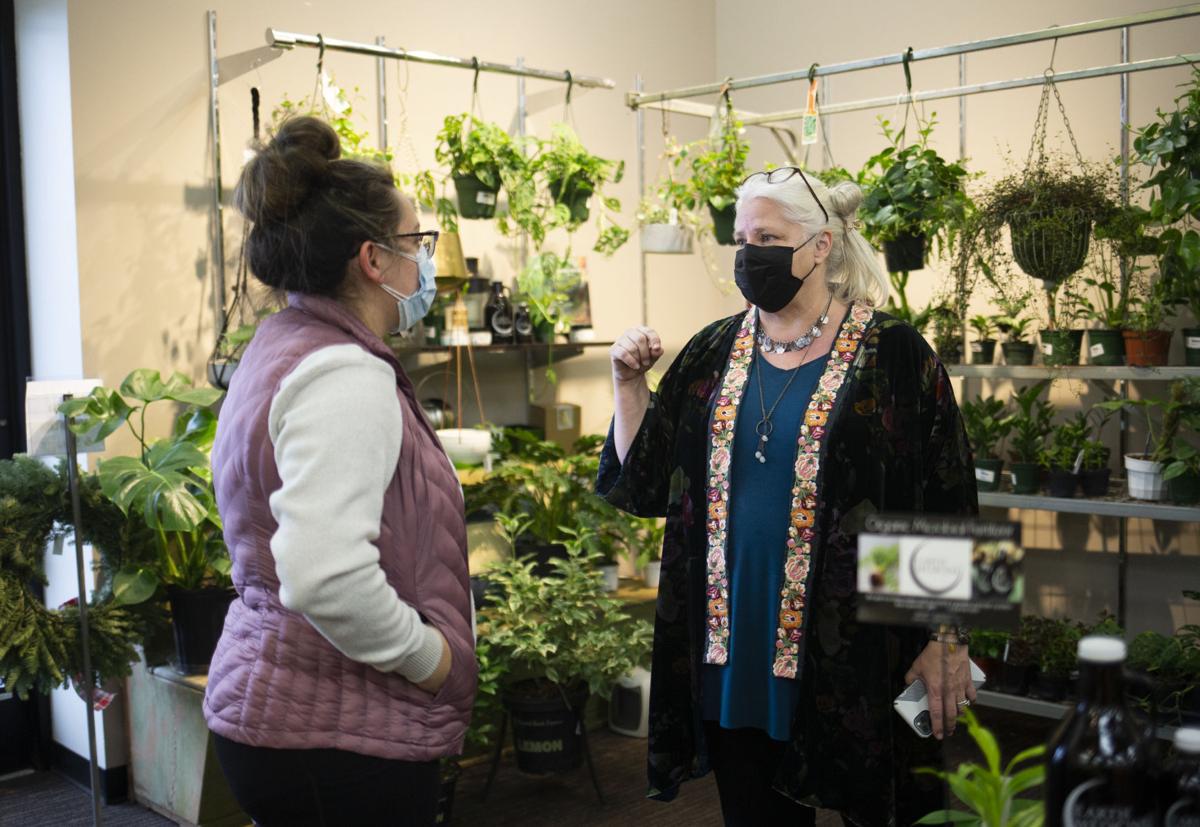 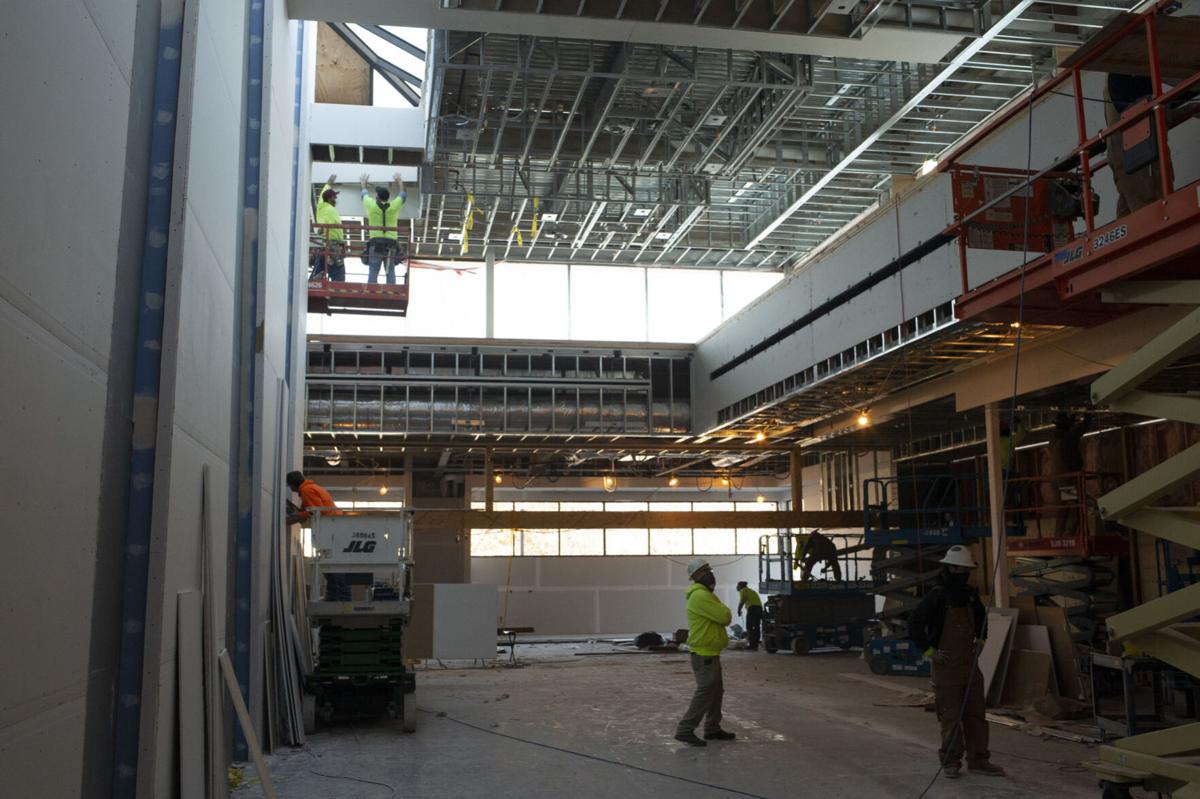 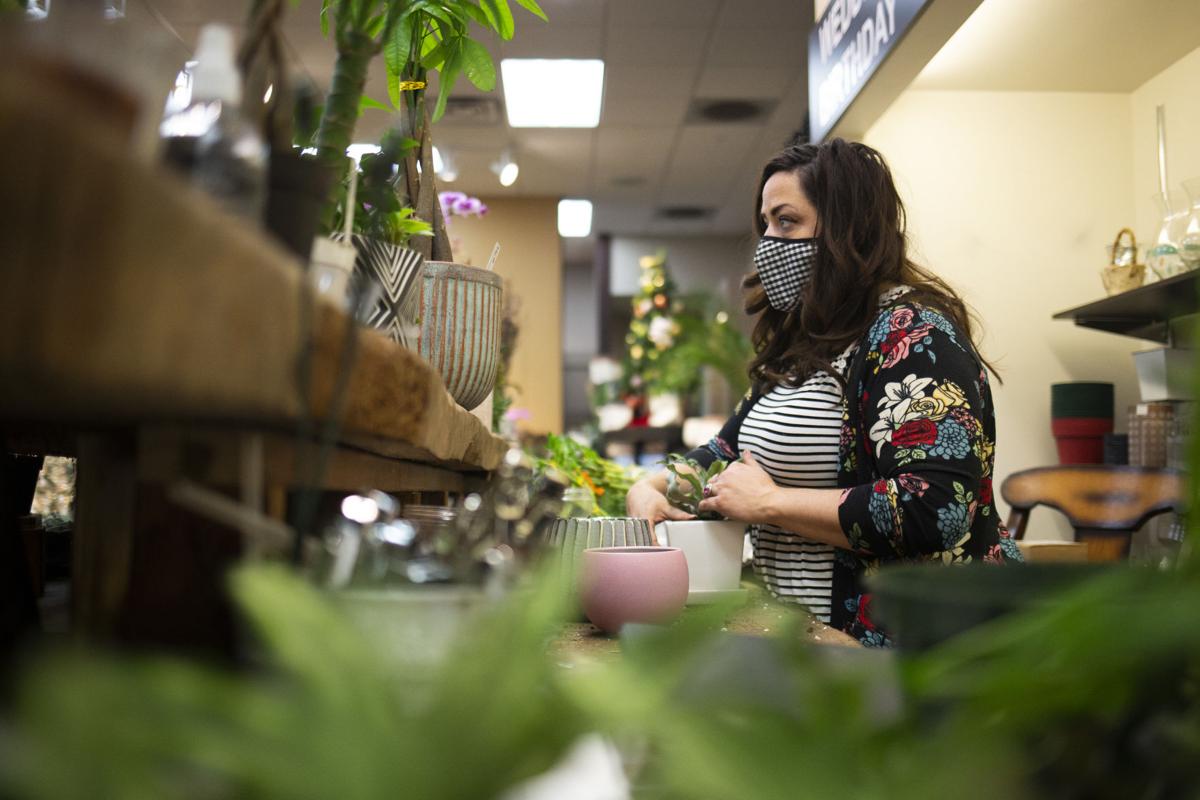 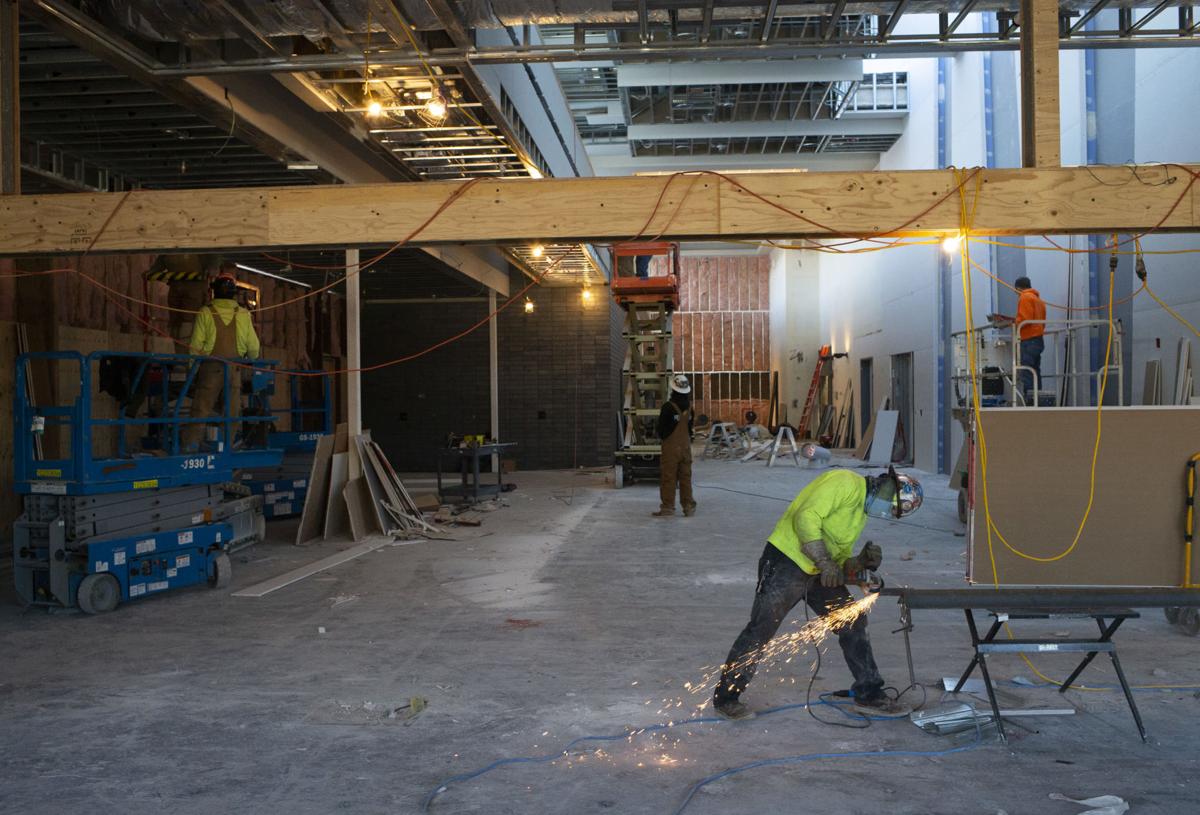 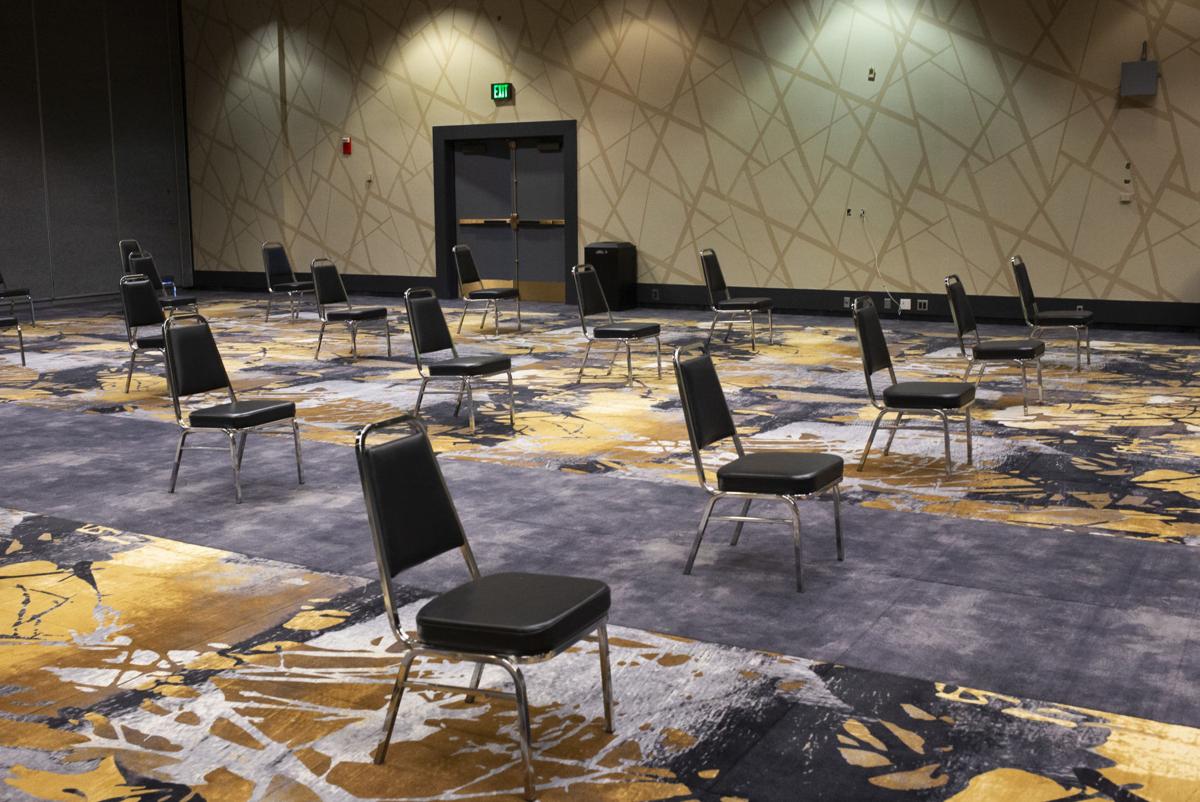 New carpet and wallpaper is pictured at the Yakima Convention Center on Wednesday, Dec. 9, 2020 in Yakima, Wash.

New carpet and wallpaper is pictured at the Yakima Convention Center on Wednesday, Dec. 9, 2020 in Yakima, Wash.

A few weeks later, the state restricted gatherings and implemented a stay-at-home order to reduce the spread of COVID-19.

Since that March luncheon, the hotel’s seven meeting spaces, which can accommodate anywhere from a few people to a group of 325 people, have remained mostly empty.

And the 20 people who worked at meetings and banquets have been on unemployment. It’s uncertain when they can return to work.

“We only had a few meetings this year,” Nuñez said. (They were) all under 10 people. We had one table per person.”

Event and conference spaces were the first to be impacted when the COVID-19 pandemic hit the Yakima Valley and the rest of the U.S. earlier this year, and they likely will be the last to see recovery.

Much of the hotel’s meeting business is tied to conferences and events in the neighboring Yakima Convention Center.

Last week, the Washington State Tree Fruit Association annual meeting and NW Hort Expo took place virtually. The meeting and trade show were scheduled to be at the convention center before the COVID-19 pandemic.

“The center, by and large, has been closed for some period,” said John Cooper, president and CEO of Yakima Valley Tourism, which operates the convention center.

There has been a silver lining: With no events happening, it has been easier to complete improvements to the convention center, including a 18,000-square-foot addition.

Cooper said the addition, which cost more than $10 million, easily will meet its target for early spring completion.

Cooper said the Yakima Convention Center is also working on a GBAC Star Facility certification, which documents that the center has established a high standard for cleaning and disinfection procedures for COVID-19 and other infectious diseases.

Cooper aims to have this certification completed by the time the center reopens, which likely will be in the spring.

Until then, the center has been running with a bare-bones staff and a tight budget, he said.

“That’s where we are we are until we get groups again,” he said.

Earlier this year, Eileen Weresch-Doornink anticipated a busy year at Cascade Garden, the West Yakima event venue she had run with husband, Wes Weresch, for 12 years.

That meant many weekends with multiple events.

The whole thing “came crashing down” in March. Initially, people had looked to reschedule for summer or fall.

Later in the year, Weresch-Doornink said the venue had a few small weddings — usually just the couple and a handful of family members and friends — but didn’t do anything larger than that.

The notable exception was a wedding in May, which happened after Weresch-Doornink made a special request to Gov. Jay Inslee to allow the event to happen because the bride had a terminal illness.

But Weresch-Doornink said she couldn’t justify having large weddings or events, whether the state would have allowed them or not. By their nature, weddings aren’t conducive to physical distancing and often are attended by elderly relatives, she said.

There have been reports of large weddings across the U.S. becoming “super spreader events” that have caused outbreaks of COVID-19.

“I get why (event venues) have to be the first to close and be the last to open,” she said.

With no events, Weresch-Doornink focused on Cascade Garden’s other offerings, including event equipment rentals and a floral shop.

“It was one of those things that evolved bit by bit,” she said. “We were always super busy with events. We just had a few loyal customers (for the floral shop) and a little bit of word of mouth.”

With the venue mostly unused for the last few months, there was an opportunity to reconfigure the space and designate more room for the floral shop, Weresch-Doornink said.

The initial plan was to complete the remodel for the floral shop in time for the holidays, but another opportunity came up at the Valley Mall in Union Gap. Men’s Wearhouse closed, and the vacant storefront was available for the holiday season.

“We just decided we’re going to get some exposure,” she said.

Having a presence at the mall introduced Cascade Garden to a new segment of customers it hadn’t served previously. As these new customers looked at gift and floral arrangements, they could also learn more about the venue.

“One of the most fun things is to see kids who are shopping, and they see a tiny plant and fall in love with it,” she said. “That’s not something we see at the Cascade Garden (venue).”

The plan is to keep the shop operating through Valentine’s Day, a significant holiday for floral shops. Eventually, the goal is to launch the remodeled shop at the Cascade Garden venue afterward.

Revenue from the floral shop and equipment rentals doesn’t come close to making up the lost revenue from canceled or postponed events, but Weresch-Doornink said she is glad for the opportunity to diversify the business.

“This is a chance for us to reboot,” she said.

Nuñez, the operations manager at the Red Lion Hotel in Yakima, has been booking events and meetings for 2021, but she thinks recovery is still far off.

Nuñez anticipates that she’ll continue to take health precautions when holding whatever meetings and events the hotel will have in 2021. Having meeting rooms at half-capacity means the hotel’s largest room will house 150 people rather than 320 or 325. It means extra staff to enforce safety measures, such as mask-wearing.

Cooper thinks there will be pent-up demand for in-person conferences and meetings.

“There’s something to be said to meeting in person, where you learn better, you’re able to interact,” he said.

Conference and event industry experts don’t anticipate a normalization of business travel or large gatherings until the third quarter of next year at the earliest.

And even when in-person events and conferences happen, there will likely be some people who won’t be comfortable in large-group gatherings right away, Cooper said. As a result, many meetings will probably be a hybrid between virtual and in-person, with some in-person sessions and virtual options, such as livestreaming of conference sessions or online interactions with attendees.

“We’re just going to have to be ready to adapt to what the conditions are,” Cooper said.

Weresch-Doornink said the time away from a busy event and wedding schedule has reaffirmed her mission — to take the burden off customers so they can focus on having a fun and meaningful event.

She’s also had more time to walk around and work on the property, making her appreciate the atmosphere she provides for weddings and events.

“It put us close in touch on why we did this in the first place and really why (we need to) to really salvage the business through this hard time,” she said. “We really love the property; we love serving people in this way.”

This month in The Bottom Line, the Yakima Herald-Republic will look at how the COVID-19 pandemic has impacted several different industries.

The Yakima Convention Center has had few events since the COVID-19 pandemic hit the region in March.

Yakima Valley Tourism released its 2019 annual report earlier this year. The report provides insights on scope of conference and meeting activity at the Yakima Convention Center:

Number of day and overnight visitors to the Yakima Valley from conventions: 78,921

Josh Koreski wouldn’t say running a manufacturing business during a pandemic is fun, but he believes it provided an unexpected opportunity to …