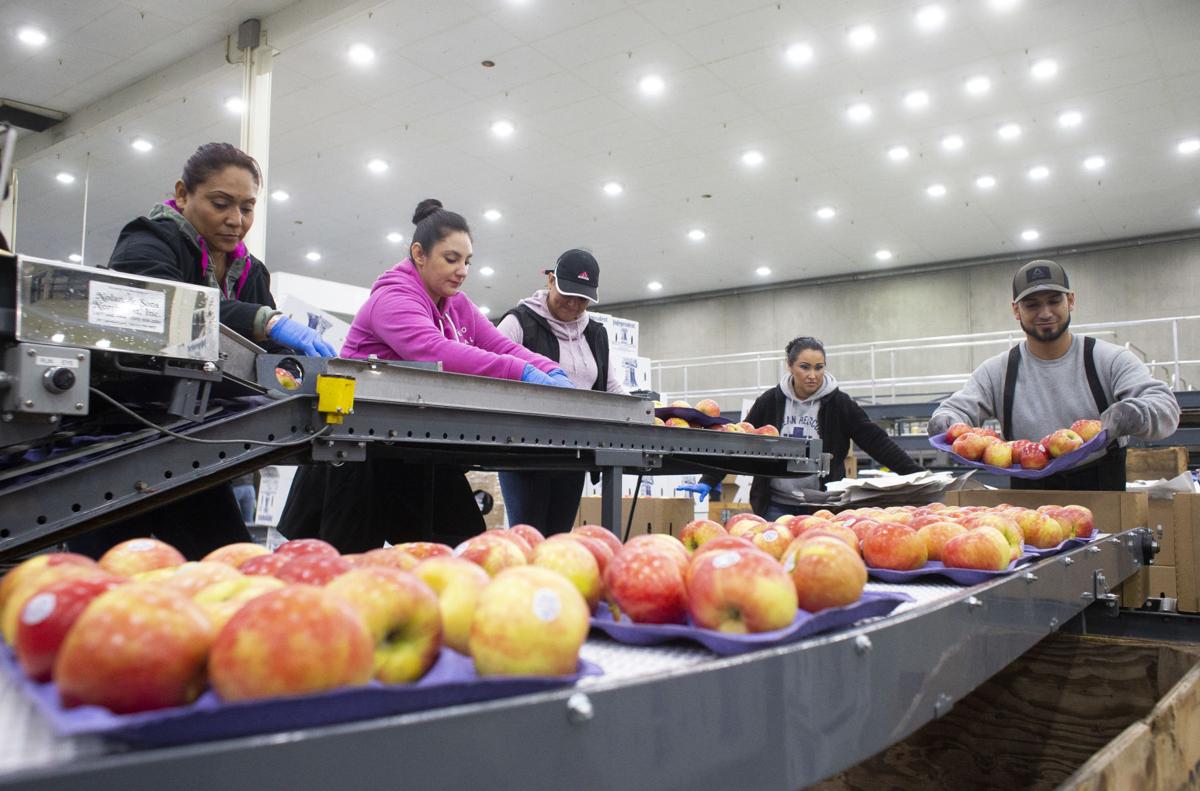 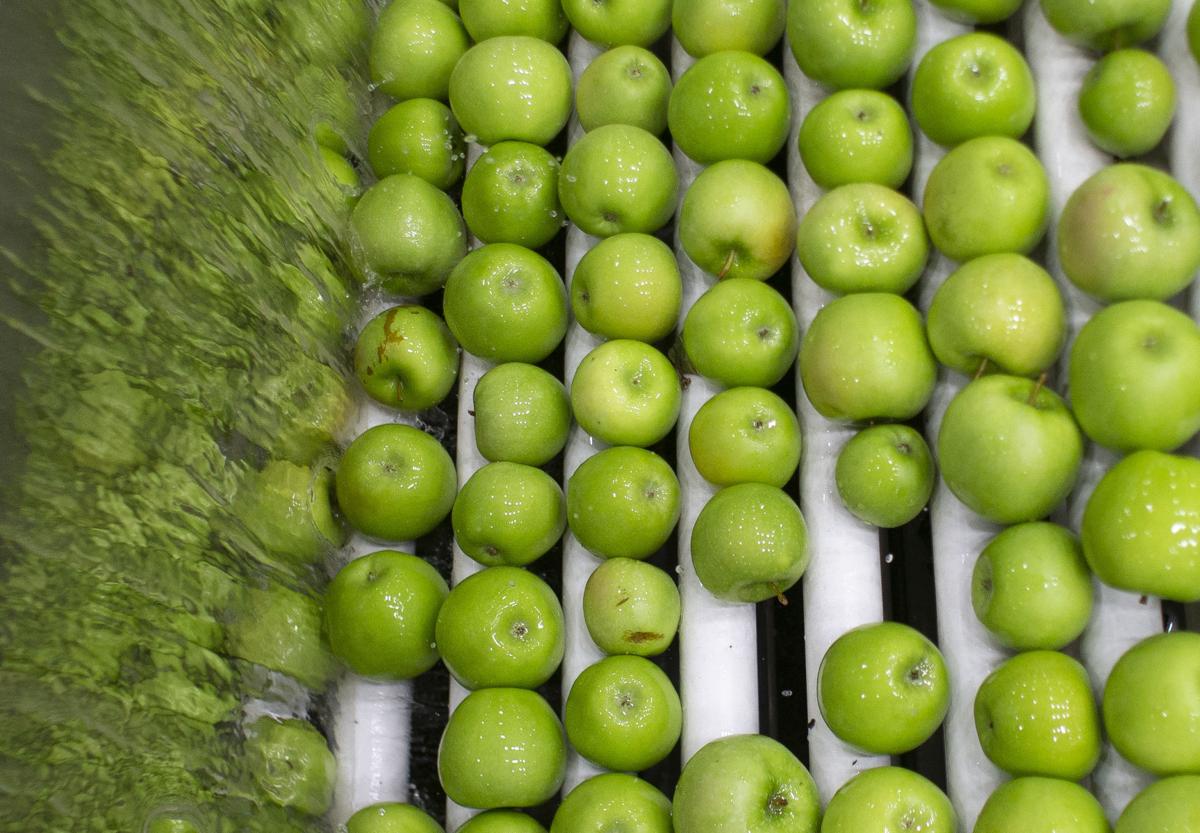 Granny Smith apples are rinsed as they travel along a conveyor belt at Washington Fruit and Produce Co. on Friday, Oct. 5, in Yakima, Wash. (Evan Abell, Yakima Herald-Republic) 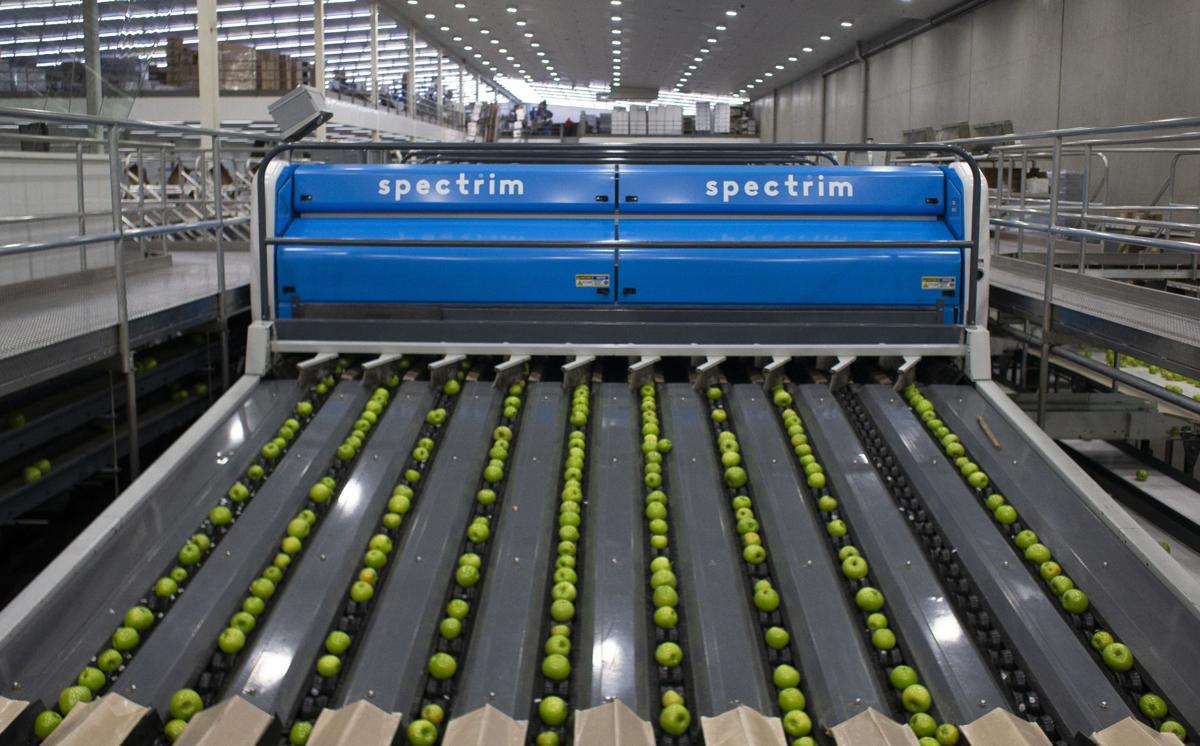 Granny Smith apples are run through a sorting machine at Washington Fruit and Produce Co. on Friday, Oct. 5, in Yakima, Wash. The machine photographs each apple 100 times and maps imperfections like bruising. (Evan Abell, Yakima Herald-Republic) 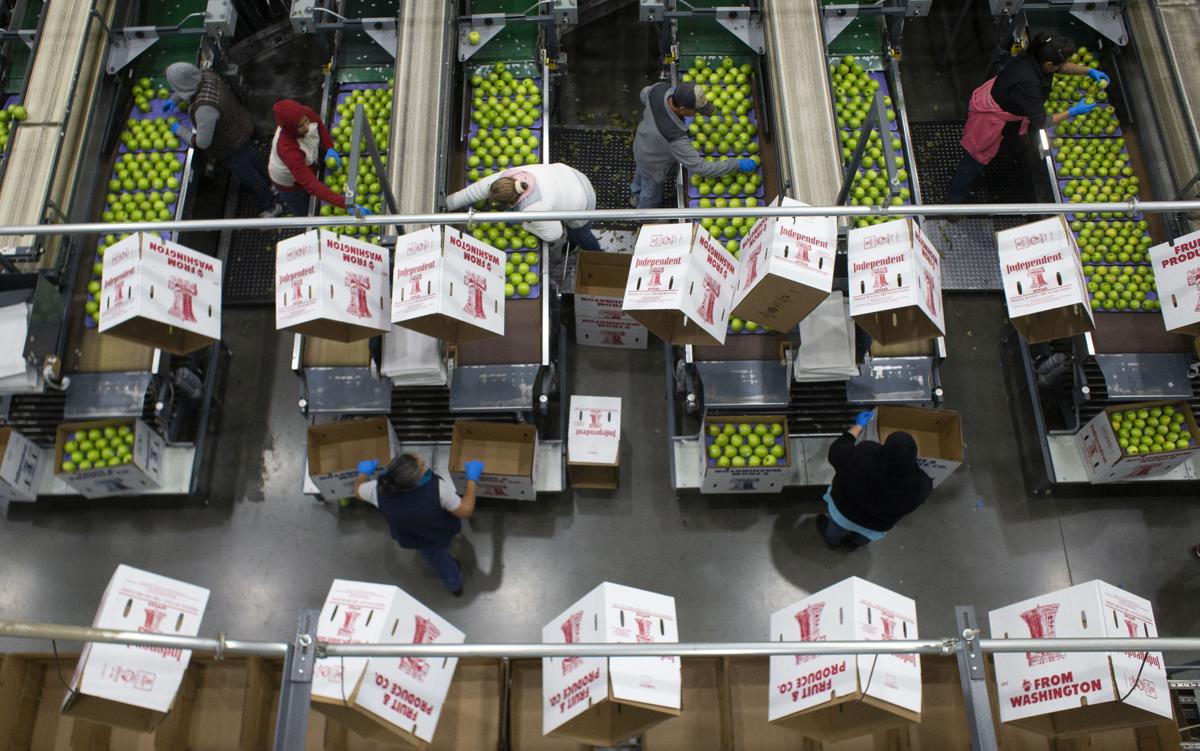 Granny Smith apples are rinsed as they travel along a conveyor belt at Washington Fruit and Produce Co. on Friday, Oct. 5, in Yakima, Wash. (Evan Abell, Yakima Herald-Republic)

Granny Smith apples are run through a sorting machine at Washington Fruit and Produce Co. on Friday, Oct. 5, in Yakima, Wash. The machine photographs each apple 100 times and maps imperfections like bruising. (Evan Abell, Yakima Herald-Republic)

China is usually the top exporter of apples to India. However, a dispute between those countries left a major void, one that Washington state growers were happy to fill.

The result: Washington state sent a record 8 million 40-pound boxes of apples to India. The country passed Canada as the No. 2 export market for apples.

“We had a tremendous opportunity,” said Todd Fryhover, president of the Washington Apple Commission, the Wenatchee-based trade organization that handles international promotions for the fruit.

Now it’s the Washington state apple crop that could be adversely affected by trade disputes. Tariffs have been implemented on U.S. apples by China and Mexico and also are planned by India. All three are top-six export markets, and Mexico was No. 1. A total of 13.1 million boxes were shipped during the 2017-18 season.

“We’re at the beginning of the 2018 season; it’s hard to predict what the impact is going to be,” said Mark Powers, president of the Northwest Horticultural Council. “We know it could be significant.”

Powers cited a past dispute with Mexico over access for its truckers that resulted in a similar tariff of U.S. apples exported to Mexico that led to a 10 percent drop in shipments in 2010.

Amid such uncertainty, the industry is taking comfort that this year’s crop is expected to be smaller compared to past years. The 131 million 40-pound boxes estimated by the Washington State Tree Fruit Association is lower than last year’s crop of 134 million boxes, and well below the record 141 million-box crop from 2014.

“There’s not as much pressure right now,” Fryhover said.

China and Mexico have implemented tariffs on U.S. apples and several other U.S.-made items in retaliation to tariffs implemented by President Donald Trump earlier this year on steel and aluminum.

Total tariffs in China and Mexico are now 50 percent and 20 percent, respectively.

Additionally, India could tack on a retaliatory tariff of 25 percent, bringing the total rate to 75 percent. The country, however, has delayed implementing the tariff several times with a new effective date of Nov. 2.

While major export activity is still weeks away, there are early signs of slowing activity, said Victor Ratia, who sells apples to several international markets for Washington Fruit, including Mexico and India.

The Yakima fruit company recently started shipping apples to Mexico for the season. Ratia noted the freight-on-board price — the price paid upon arrival to receive a shipment of apples — in Mexico is lower compared to this time last year. That may be an indicator that importers are feeling cautious due to the tariffs, he said. “The (buyers) are being more cautious because the market is unpredictable,” he said.

Meanwhile, Fryhover said he is anticipating shipments to China from this year’s crop could drop by as much as 80 percent compared to last year, when the country imported nearly 1.7 million apples. Along with the high tariff, anti-U.S. sentiment may keep some consumers from buying U.S.-grown fruit, he said.

At the same time, Washington state apples have been held in high regard by Chinese consumers, who are willing to pay a premium for them, so he doesn’t anticipate shipments to the country to stop entirely.

“There is value in doing business (in China),” he said. “But there is also a lot of risk.”

It appears unlikely that India will continue taking record numbers of Washington apples. A larger crop of apples in India in recent months has depressed prices, Ratia said.

“Many importers are losing money,” he said.

In addition, the country already has a 50 percent tariff on apples, which could increase to 75 percent in November.

If shipments to Mexico, India and China slow, fruit companies here will have to look to other markets to fill the void.

More apples could remain in the domestic market, where typically about 70 percent of the crop is sold.

Better returns are not guaranteed there. Washington growers have to contend with apples from other growing regions, such as New York and Michigan, Ratia said.

“Sending product to the East Coast can be challenging at times,” Ratia said.

One potential bright spot could come from Canada, which until last year was the No. 2 export market for Washington apples behind Mexico. Canada is the No. 1 market for organic-grown apples, which typically yield a premium.

If the domestic market can not absorb additional apples, Canada, which has a similar retail structure and consumer base, is a natural place for the apples to end up, Fryhover said.

“Canada has always been and continues to be a strategic market,” he said.

With export shipments for this new crop still in the early stages, industry officials hope there is still time to resolve trade issues that would improve export conditions.

Importers in Mexico are “cautiously optimistic that will result in the elimination of tariffs,” said Ratia of Washington Fruit.

Ongoing delays by India to implement a tariff may be a sign that resolution may not be far off, Powers said.

Relief is available for growers if trade issues continue. The U.S. Department of Agriculture plans to purchase up to $93.4 million in apples for federal nutrition and food bank programs from those adversely affected by tariffs.

“It’s not intended to make anyone whole, it’s there to assist,” Powers said.

There’s an extensive process to qualify as a vendor, however, so some fruit companies may still prefer to find other ways to export more fruit to other countries. Washington ships apples to some 60 countries worldwide, Powers said.

“It’s really a business decision for each company,” he said.

YAKIMA, Wash. -- Members of the agricultural community locally and statewide reacted positively to a new trade agreement between the U.S., Mex…