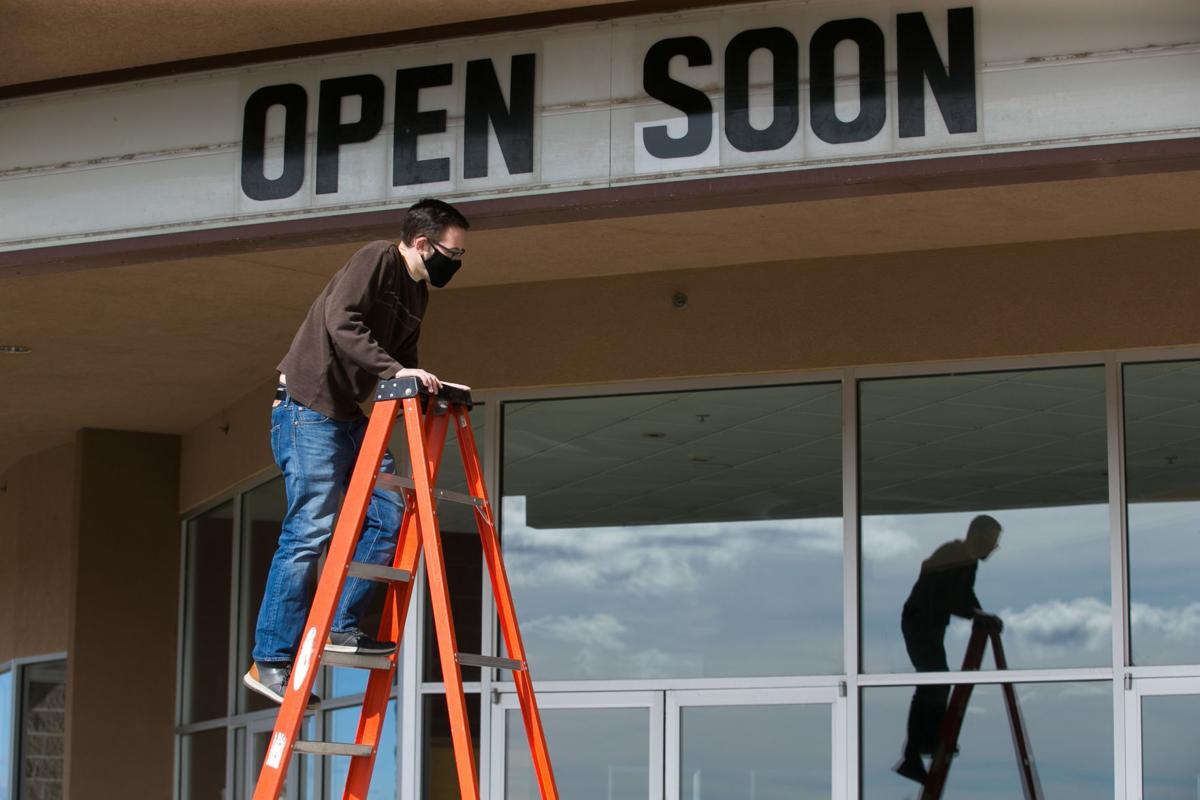 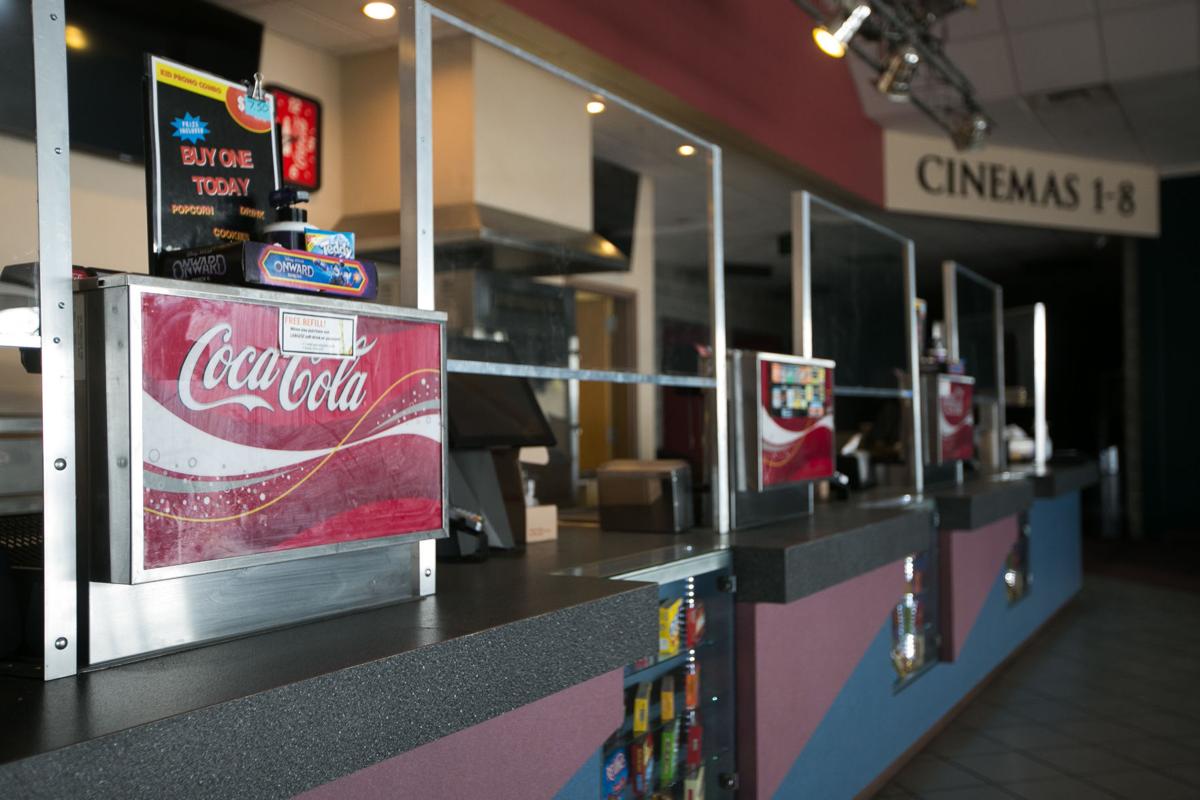 Plexiglass barriers stand in front of concession stands to preserve physical distancing and to prevent potential transmission of COVID-19 at the Grand Cinemas in Sunnyside, Wash., Wednesday, Oct. 14, 2020. Movie theaters are set to reopen in Yakima County now that it’s entered Phase 2. 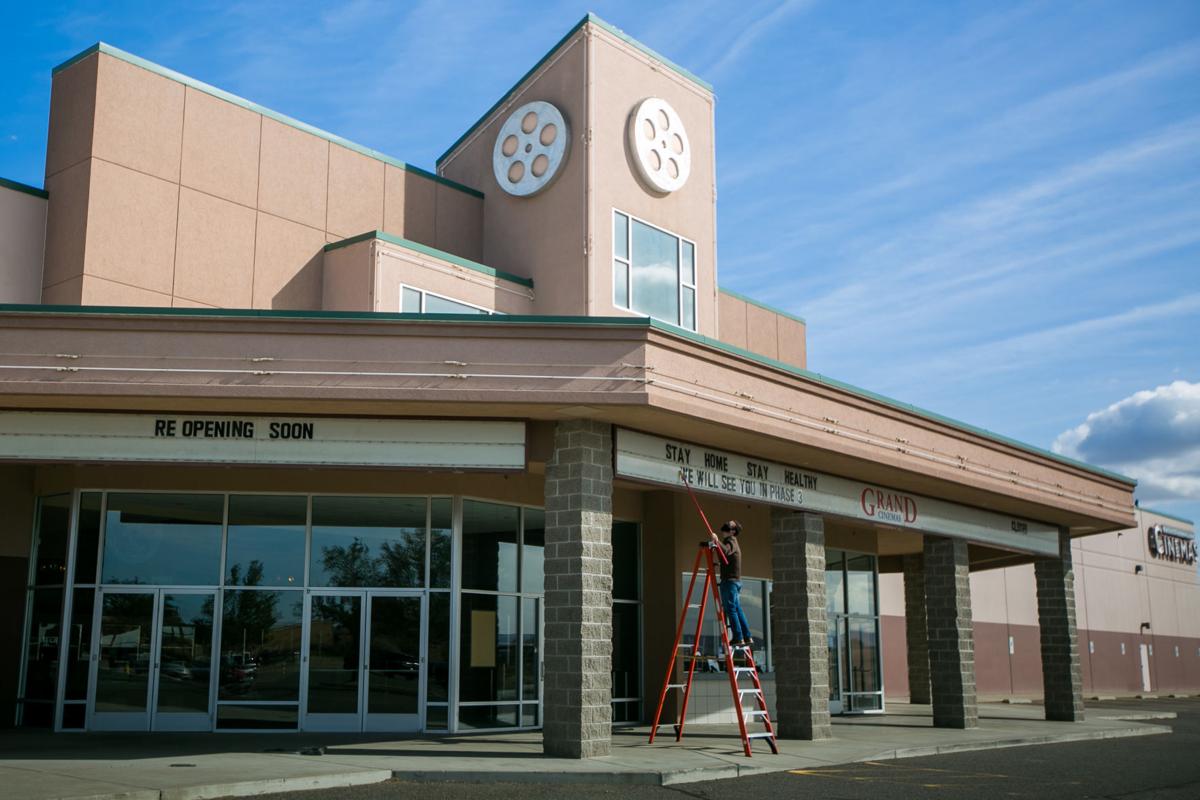 Plexiglass barriers stand in front of concession stands to preserve physical distancing and to prevent potential transmission of COVID-19 at the Grand Cinemas in Sunnyside, Wash., Wednesday, Oct. 14, 2020. Movie theaters are set to reopen in Yakima County now that it’s entered Phase 2.

On Wednesday, Daniel Fredrickson changed the marquee of Grand Cinemas from “closed” to “reopening soon.”

After closing in March because of coronavirus stay-at-home orders, the Sunnyside movie theater is preparing to reopen. When moviegoers return, they will see changes, such as plexiglass barriers at the concession stands.

The theater, like hundreds of others across the U.S., are following safety guidelines established by the National Association of Theatre Owners, a trade association based in Washington, D.C. Moviegoers must wear masks. Other guidelines call for social distancing, reduced capacity and the use of mobile ticketing to minimize contact between patrons and employees.

And so Yakima Valley residents will soon be able to have a night at the movies, now that the county has moved into Phase 2 of the state’s reopening plan. Under that phase, movie theaters can reopen at 25% capacity.

Throughout the Yakima Valley and across the state, movie theaters shut down as the COVID-19 pandemic hit, and remained closed for months.

Originally, counties had to reach Phase 3 of the state’s reopening plan for movie theaters to resume operations. The Grand Meridian Cinema, a movie theater in Ellensburg, has been open off and on since late June as that county reached Phase 3.

But earlier this month, Gov. Jay Inslee revised restrictions to allow movie theaters to open in Phase 2. Movie theaters in Phase 3 are now allowed to operate at 50% capacity. With Yakima County and four other counties being moved up from a modified Phase 1 to Phase 2 last week, all movie theaters statewide can now reopen.

Fredrickson said it would take a few weeks for the Grand Cinema to resume operations, as they need time to clean the theater and bring back staff.

The theater is still working on reopening details, but one thing that will occur is staggered movie viewings to allow enough time to clean screening rooms. At any given time, half the theater’s 12 screens won’t be in use.

A movie will play in one room, then be cleaned while the movie plays in a different screening room.

Under the reopening restrictions, capacity will range from 20 people to 67 depending on the room’s size. The theater is looking into a reservation-based system.

“It’s the easiest way to make sure people are spaced out,” Fredrickson said.

Yakima Theatres is also in the process of reopening its three theaters in Yakima and Union Gap: Orion Cinema, Yakima Cinema and The Majestic.

The company reopened Mickey’s Pub, a restaurant and bar inside the Orion, last month. That provided some revenue while the theaters remained closed, said general manager Jeff Simmons.

“Any revenue is good revenue,” he said. “It’s good to get some of the employees back to work.”

Since Mickey’s Pub has been open and the building has been in use, it will be a quicker turnaround for the Orion. The aim is to open the theater by Friday, Clemmons said.

Capacity at the three screening auditoriums will range from 19 to 25 people. Clemmons said the theater hopes to introduce reserved seating, where moviegoers can choose their seat when purchasing tickets online.

Yakima Cinema and The Majestic will take a little more time to reopen since the buildings have been empty for several months. However, the two theaters already have several safety features, including markings for social distancing and plexiglass windows at the concession stands. Clemmons said the aim is to reopen those two theaters by around Nov. 6.

Both theaters have 10 screen auditoriums. Capacity will range from 20 to 75 people, depending on the size of the auditorium.

A new Yakima Cinema building, which was in the works prior to the COVID-19 pandemic, is now delayed. Yakima Theatres hopes to resume the new development soon, but is focused on reopening and rebuilding its customer base, Simmons said.

“Once we’re back to normal, plans will proceed,” he said.

Many studios are holding off on new releases until theaters in New York reopen, said Phil Contrino, director of media and research for the National Association of Theatre Owners. Such new releases will be crucial in getting people back to movie theaters.

“The theaters that are open are playing older titles,” he said. “It’s not enough to keep the lights on. They’re facing tough decisions.”

Grand Meridian Cinema in Ellensburg, in fact, cited a lack of new movie releases when announcing it would close again in late July. The theater resumed operations in September.

Movie theaters have already suffered numerous losses due to extended closures. Nationwide, theaters are expected to see a 62.6% year-over-year loss in 2020, according to a September report from IBISWorld, a Los Angeles-based research firm. Closures also occurred during the summer months, when major blockbuster releases generate revenue for theaters.

The IBISWorld report predicts a partial revenue recovery in 2021, but the question remains whether theaters can survive in the meantime. Earlier this month, AMC Theaters, a major movie theater chain, said it could potentially run out of money by the end of this year or the start of next year.

In Yakima County, movie theaters are independent and family-run.

Hallett Cinemas, the Hallett family firm that operates Grand Cinemas in Sunnyside, is based in Pasco. Yakima Theaters is run by the Mercy family in Yakima.

Independent theaters elsewhere in the U.S. have done several things to generate additional revenue, such as encouraging people to donate to crowdfunding campaigns, said Contrino, director of media and research for the National Association of Theatre Owners.

These theaters have been able to share their challenges and ask for support.

“We’ve seen a lot of theaters that have been successful in raising money that way,” he said.

The trade association recently launched a new campaign, #SaveYourCinema, to push the federal government to aid the movie theater industry. As part of the campaign, the association launched a site to encourage moviegoers to write to their congressional representatives.

Without substantial aid, many theaters may be forced to close, perhaps for good, Contrino said.

“The footprint of theaters could be reduced quite a bit,” he said.

Fredrickson, the district manager for Hallett Cinemas, said they’re looking into private screenings. Like other theaters, things will remain challenging until more new titles are released.

“Overall, it’s been tough for us,” he said. “We’re trying to do our best to take care of employees and keep things going. We’ve been in Sunnyside since 1983. We’ll be here as long as movies will be around.”

Clemmons said Yakima Theatres took a big financial hit with the extended closure, but he believes the company can recover, especially as new movies are released. He’s already received calls and emails asking when they will reopen.

“They want to escape,” he said. “They want to get out, especially as the weather changes and options become limited again.”