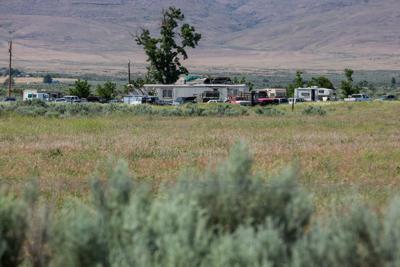 White Swan is an unincorporated community of nearly 800 people, remotely situated on the most westerly portion of the Lower Valley floor.

Sprawling hop fields and vineyards separate White Swan from the rest of the Valley. The nearest Walmart is a 45-minute drive. Two convenience stores, a saw mill and the Mt. Adams School District are the largest economic drivers.

Yakama Nation government headquarters and tribal services are more than 20 miles to the east in Toppenish.

Poverty is high and opportunity slim.

Here, there have been 11 known homicides, including the five recent killings, since 2016.

In February 2018, the Yakama Tribal Council declared a public safety crisis on the reservation after seeing a spike in crime. The council warned it would impose harsher penalties on criminals, including loss of treaty fishing and hunting rights and even banishment from the tribe.

Delores Martinez, who lives in the outskirts of White Swan, keeps her firearm nearby.

“Guns are cocked literally before I open the door,” she said. “My friends and family know that, so they know to call me before they come over.”

Raised in White Swan, she’s seen a lot of changes.

“Definitely a lot different when I was growing up,” she said. “I use to ride my horse on the weekends all the way to Brownstown from White Swan. That’s what I’d do. There’s no way I’d let my daughter do that today.”

Jorge Castro, 34, moved from Wapato to White Swan a few months ago in search of a quiet life in the country. But he’s finding the area isn’t as tranquil as he envisioned.

His car was broken into, he said.

“There’s just a lot of these troubled people that are walking around stealing,” said Castro, a cook. “Now you’ve got these people that got executed, you know, and it’s five people. It’s just shaken up everybody.”

The tribe’s police force is composed of more than 20 officers responsible for patrolling the 1.3-million-acre reservation.

That equates to about two officers a shift, said Udell, whose office helps patrol the reservation.

“You get a call out there and it just seems like forever,” he said. “And I know the people who live out there get frustrated at times.”

Much of the recent spike in crime there has come on the heels of retrocession, a process in which the tribe had restored much of its civil and criminal authority over tribal members on the reservation.

When that happened, there was confusion over how cases would be handled involving non-tribal members living on the reservation. The eastern edge of the reservation is a checkerboard of tribal and non-tribal land.

The Washington State Patrol stopped routine patrols on highways that carve through the reservation.

The tribal jail began to fill up and Yakama Nation police were overwhelmed, former Sheriff Brian Winter had reported.

Since then, the tribal police have increased the number of officers from about a dozen to more than 20, Udell said.

A substation in White Swan also has been staffed with tribal officers to improve police presence there.

Even so, residents still seem to lack faith in the police. Jurisdictional issues may be part of the problem.

Martinez said she’s frustrated with the investigation into the 2017 hit-and-run death of her 15-year-old nephew, Wilson Winters.

Martinez said an FBI agent only spoke to her once about the case and never provided her with any conclusions.

She said the agent called her once to inform her he was waiting to receive the initial reports from tribal police.

“Once he said that, I knew there was absolutely nothing that was going to get done,” Martinez said.

In the five killings, Udell said investigators were working to see if it was in retaliation for previous homicides in the area that may have involved suspects’ family members.

Rumor has it that one of the suspects had been previously shot, as well as one of his relatives, in incidents that may have gone unreported.

He says tribal authorities do report crime and share that information with neighboring agencies to help inform the public.

He said the problem is that serious cases go to the FBI, an agency that typically doesn’t share much information.

“Basically on our end, we’re not in control of information sharing in that level,” he said. “Our stance has always been in the name of public safety and that we’re always cooperating parties.”

When the suspects in the five slayings were captured, the Yakama Nation announced the developments in news releases to the media.

Various law enforcement agencies, including sheriff’s deputies, police from Toppenish, Wapato, Zillah, the State Patrol and the Yakama Nation teamed to launch the manhunt that led to the arrests.

Goudy said the tribe’s police department isn’t the only one in need of more resources.

“There’s a lot of people that live here,” Udell aid. “We’re small in comparison to other sheriff’s offices.

But in terms of area, Yakima County is the second largest in the state behind Okanogan County.

Goudy said tribal leaders continue to seek additional resources from the U.S. Department of Justice and the FBI.

“It’s a very harsh reality,” Goudy said of the crime and lack of resources. “About every jurisdiction is put into this position. I would hope that collectively we can unite our voice in a broader voice to meet public safety for our entire region.”

March 27 – An unidentified male was buried in a fire pit in the 500 block of Medicine Valley Road in White Swan.

Nov. 28 – The remains of Jedidah Moreno, 30, were found in an area of the Yakama Reservation closed to non-tribal members. She had been shot. She went missing in September.

Feb. 15 – Linda Dave’s body was found at the intersection of Marian Drain Road and U.S. Highway 97. Dave, 38, died of a gunshot wound to the stomach.

Sept. 18 – Neil Cloud, 20, was found stabbed to death on Towtnuk Road in Medicine Valley west of White Swan. Donovan Culps, 36, who was indicted by a federal grand jury in another homicide, also was a suspect in Cloud’s death along with co-defendant George Skyhawk Thompson. Both were convicted of murder.

Dec. 29 – The body of Destiny Lloyd, 23, was found near the intersection of Marion Drain and Harrah roads just south of Harrah. An autopsy revealed she died of a basal skull fracture.

May 5 – Felina Blanch Metsker’s body was found southwest of White Swan in a closed area of the Yakama reservation. The 33-year-old was last seen March 25 at her trailer on Barkes Road near Harrah. George Skylar Cloud, 22, was convicted of murder. His cousins, Nicole Lee Sunny Cloud, 30 and her sister, Kristen Ashlie Windy Cloud, 38, pleaded guilty as accessories. Neil Cloud, 20, also a suspect, was killed before being tried.

Bail set at $1 million for suspect in White Swan homicide

A year after a murder spree in the Lower Yakima Valley, the accused killers of five people are still awaiting trial.

In White Swan, even job opportunities close by can be hard to reach

It’s about 30 miles between Yakima — where Cheri Root works as a paralegal for a local law firm — and White Swan, the unincorporated community…