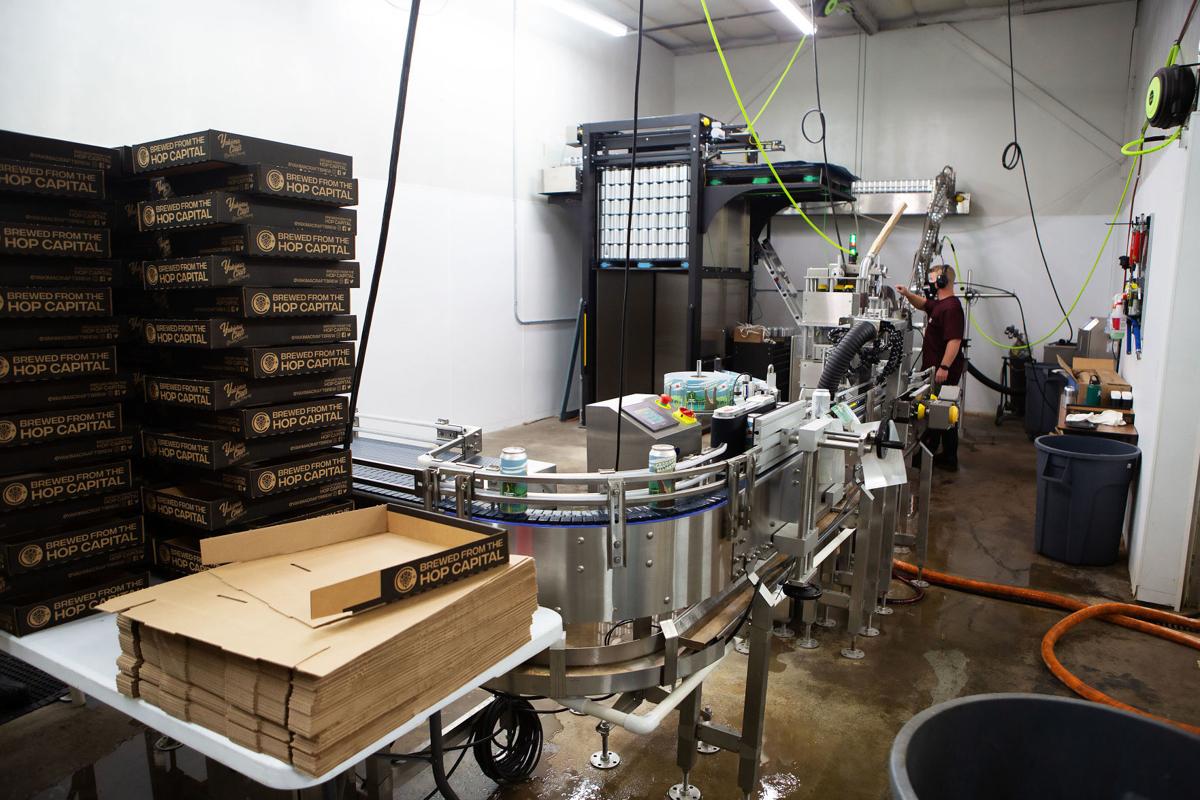 The pandemic has shut down much of the Yakima Valley this year, but it's cracked open some new revenue streams for local brewers. 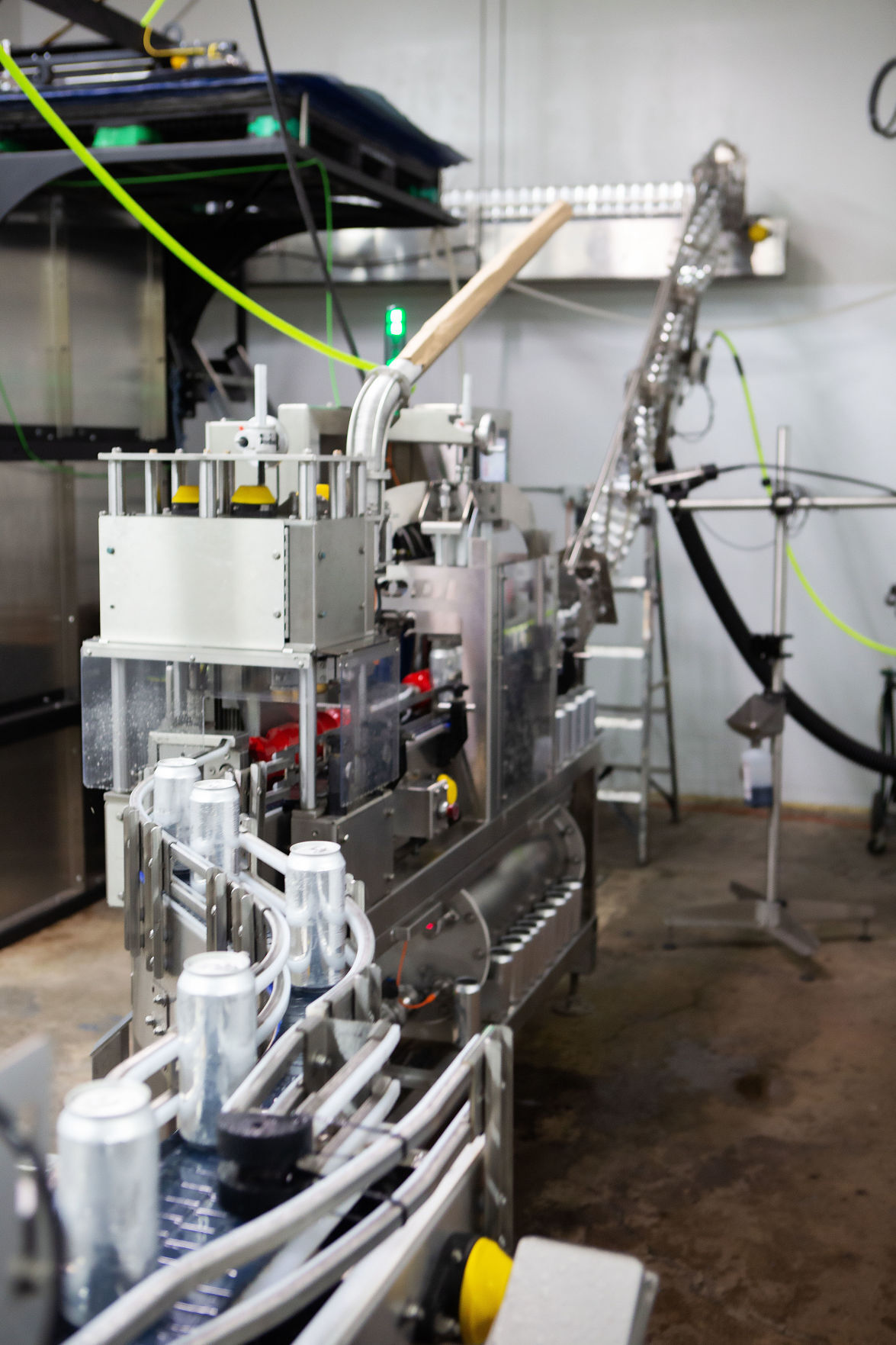 For many local brewers, cans hold the key to success. 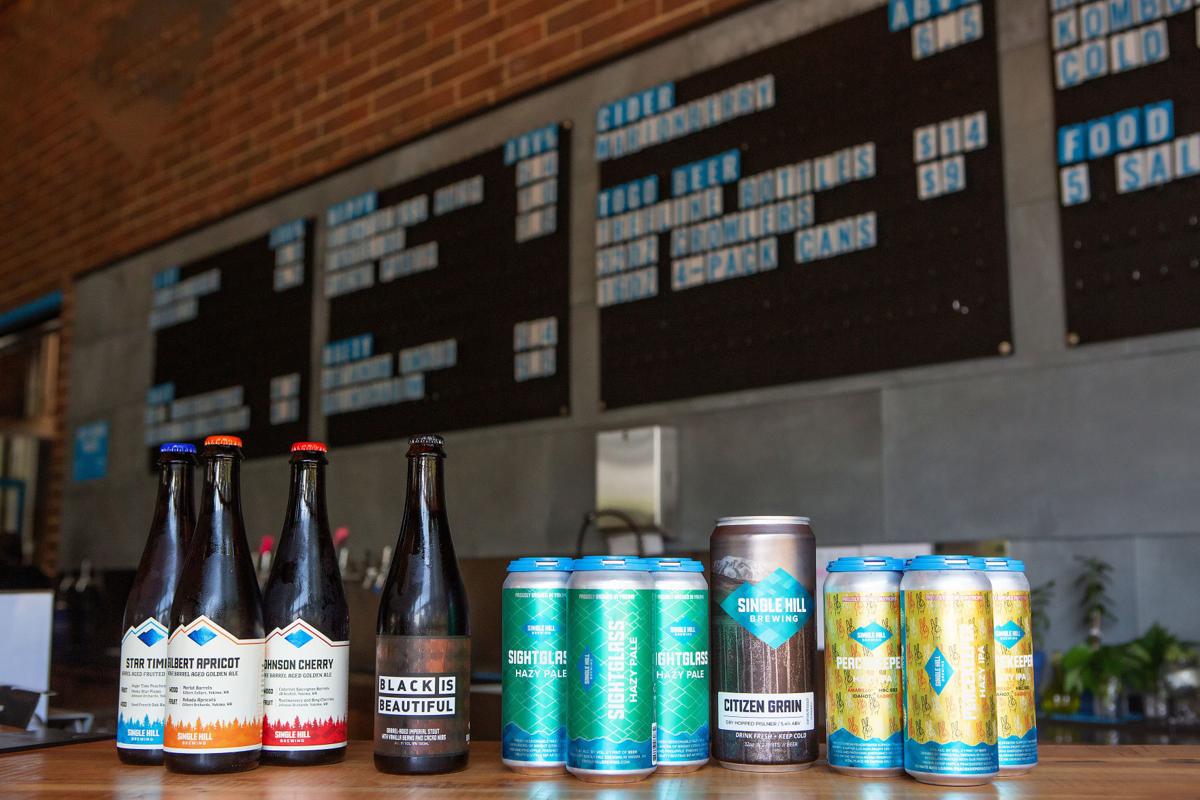 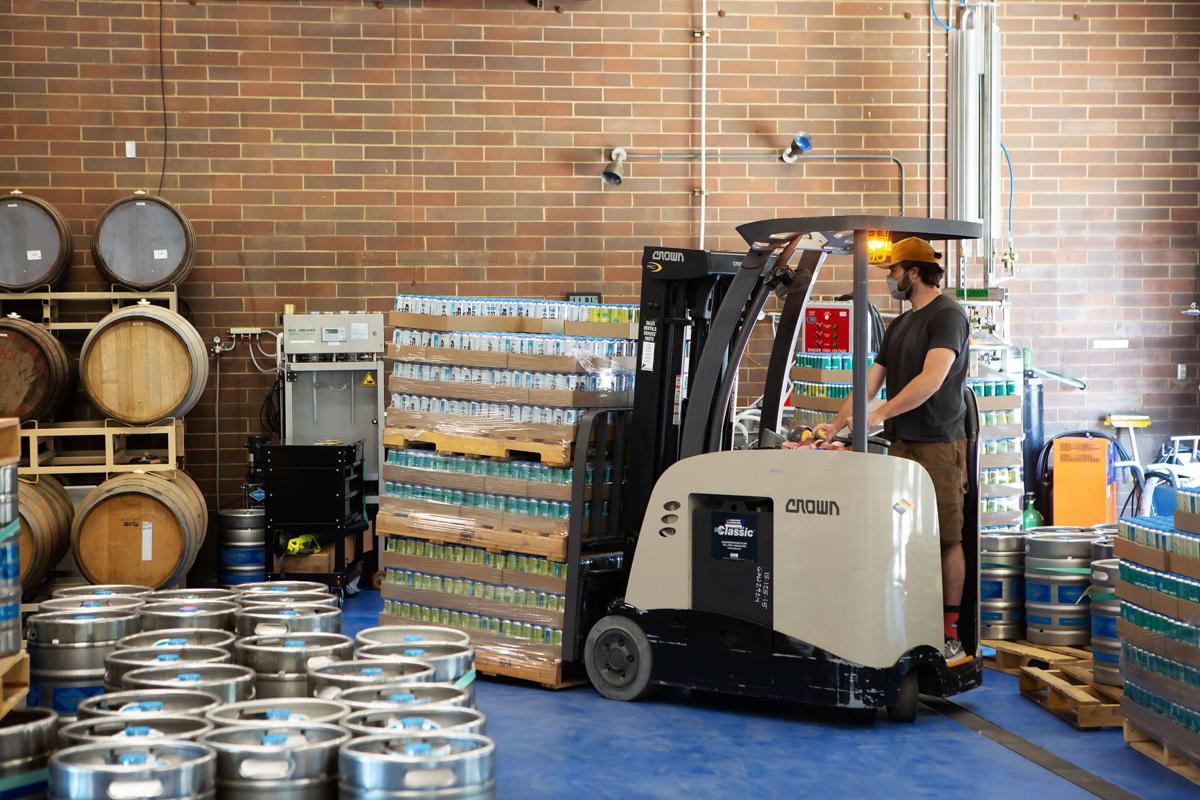 After the pandemic shutdown, brewers like Single Hill had to shift gears fast. 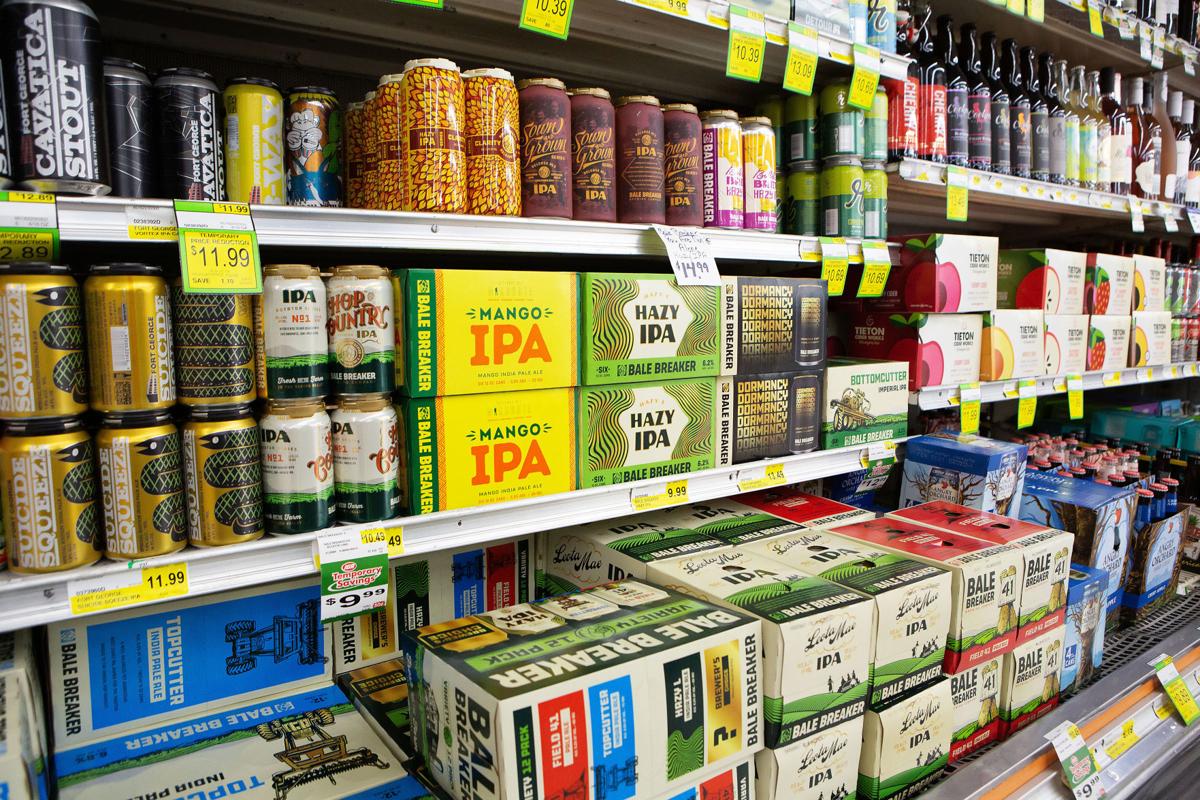 Can't get to your favorite local craft brewery? Look for their wares at grocery stores like Wray's, which is stocking even more local beers than ever these days.

The pandemic has shut down much of the Yakima Valley this year, but it's cracked open some new revenue streams for local brewers.

For many local brewers, cans hold the key to success.

After the pandemic shutdown, brewers like Single Hill had to shift gears fast.

Can't get to your favorite local craft brewery? Look for their wares at grocery stores like Wray's, which is stocking even more local beers than ever these days.

For months, Yakima-area breweries have faced the daunting task of providing their liquid nectar to an all-too-eager audience while staying safe and following government rules, regulations and guidelines. Business has become anything but usual.

But many breweries have found “the pivot.”

The pivot is what companies across the region and country have done with their business model for nearly half a year. An obstruction was placed directly in front of their businesses and they needed to stop, pivot and find a new direction in order to move at all.

For some breweries it was relatively easy. For others, a nearly insurmountable task. The new direction could not be a one-size-fits-all solution. It’s been a different answer for each brewery.

Supplying kegged beer to various restaurants and bars throughout the valley, state and beyond was the main distribution vehicle for many local breweries. With restaurants shut down for months, however, those sales came to a screeching halt. For a few of the breweries, keg sales represented 50-75% of their revenue and caused tremendous struggles in selling their products let alone paying minimum expenses.

Canning has been the main pivot direction for most of the breweries. Again, there was no one-size-fits-all plan for every brewery. Each has had to become inventive in their own way.

At Single Hill Brewing Company, co-owner Ty Paxton said, “Covid forced our hand to get creative. The taproom was 50 percent of our distribution. We wanted it to be an extension of your living room to enjoy a beer in.”

After the shutdown, the Single Hill team spent a day and a half brainstorming options. To start, they realized crowlers (32-ounce cans that can be filled from the tap and sealed individually, which they were already using) would be key to their success. They immediately sourced as many cans as possible.

The brewery then realized smaller-size canning was needed to get their products out in mass distribution as opposed to only out of the tap room. They added 16-ounce cans to their lineup, which allowed their beer to easily be distributed locally as well as across the state and into Portland. By July, 95% of their beer was distributed in cans.

Hop Capital Brewing (formerly Yakima Craft for those who haven’t been paying attention), met with a similar fate early on. Owner Johnathon Thomas said, “To-go sales in the tap room greatly diminished to a loss of 95%, and then we lost 100% of keg sales by the end of the week.”

Thankfully, a third of their business already came from canned products in the retail world, but they needed to pivot to increase that amount. By April, 100% of their distribution was in crowlers, 16-ounce and 12-ounce cans. They began self-distribution in areas not previously covered and tried to increase distribution in the Seattle and Portland markets, which were key to their pre-Covid success.

And, as one of the only breweries in the area with a permanent canning line, they are packaging products for some of their friendly local competition as well. It provides additional revenue for them, and solutions for the other breweries.

Their neighbor on the north side of town, Valley Brewing, has not seen a tremendous change in their overall business during the past few months. While they lost the obvious consumption-on-premise sales, their to-go sales of crowlers and cans greatly increased. They haven’t worked with outside distributors in the past, so they did what they could on their own to better develop the key regions of Seattle, Spokane and Tri Cities, which has helped a lot.

Asked what they intend to offer for the foreseeable future, owner Joe Daily said, “We always keep our eight flagship beers in cans and crowlers but are not doing growlers at this time.” Their experimental beers work well in the crowlers, too, and the ones that are most successful will see labels developed for their 16-ounce canned versions.

Cowiche Creek Brewing Company has offered growler fills from the beginning. However, due to their location deep in Cowiche (about 25 minutes from downtown Yakima), they aren’t a natural destination for those out of the area. Owner Derrick Nordberg set up a sanitation station for anyone to bring in their own growlers or purchase one from them.

He wondered what else they could offer without their own bottling or canning line. In mid-April, the brewery offered its first pre-packaged product, a 22-ounce “bomber” bottle of their Golden Soda pilsner.

“It wasn’t for sales volume, but I needed an indication of how packaged sales would do for our product,” Nordberg said.

Twenty-five cases moved through the brewery quickly and Cowiche Creek started rolling out 12-ounce cans the first week of August.

The giant of the area, Bale Breaker Brewing Company near Moxee, saw some major losses up front, but also has been able to pivot. In mid-March, the brewery had more than 1,200 kegs filled in their cooler or with distributors. They were able to can some of the products, but ultimately had to destroy nearly 1,000 kegs worth of beer that spent too long in barrels.

For two months, they switched to 100% packaged sales with nothing in kegs.

“Pre-Covid, we were 75% in cans,” co-owner Kevin Quinn said. “We saw an uptick in grocery and convenience stores, but not enough to get back that missing 25%.”

Their regular lineup is still in 12-ounce cans, but their specialty brews have adapted. Traditionally, you could only find some at their events, like the Bubba’s Brew for their annual Ales for ALS event. Those beers are now packaged in 16-ounce cans for mass distribution.

Another way some local breweries have seen some positive light is with area retail.

Locally owned Wray’s grocery stores are carrying some of the canned beers. Breweries have found it much easier to get decisions from an owner who lives in town as opposed to working through distributors for valuable shelf space.

Brown said specialty beers that were previously poured only in taprooms are moving especially well. This month, Wray’s will begin stocking beers from at least five local breweries: Bale Breaker, Hop Capital, Single Hill, Cowiche Creek as well as Varietal from Sunnyside. Other convenience stores and specialty retailers are increasing their local lineups as well.

Yakima County recently began allowing breweries to open if they follow the social distancing guidelines for restaurants. Amid the uncertainty of businesses being open in the future, expect to see more of your favorite local beers in a variety of sizes and in more locations.

I, for one, am thankful for the ability to still support our local breweries and enjoy their hard work.