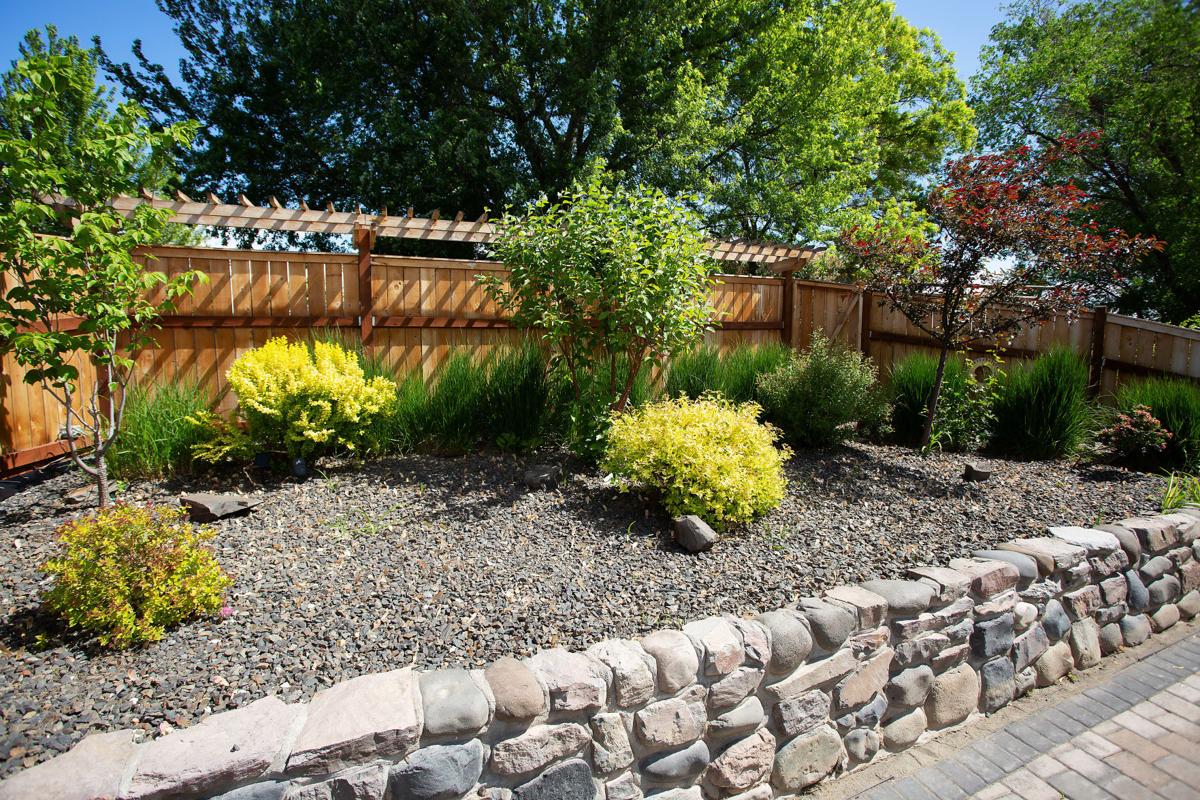 Xeriscape-style landscaping adds to the openness of the home and property. 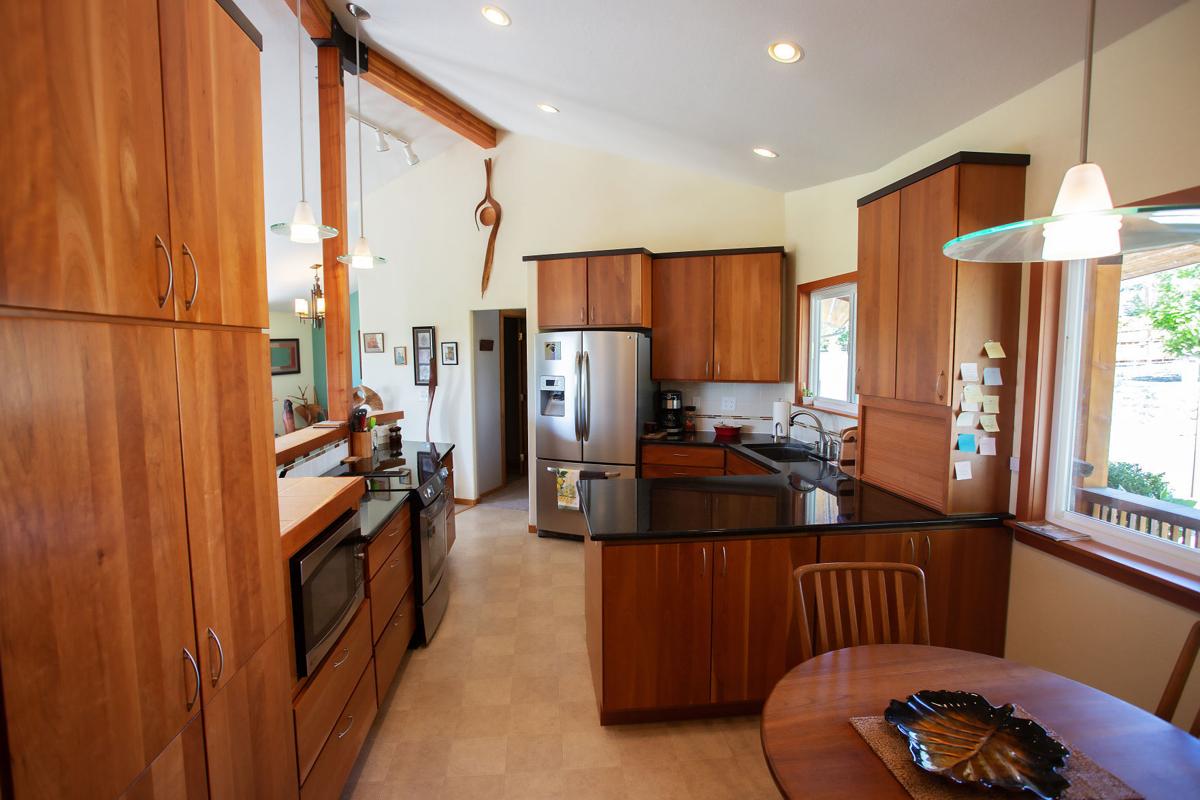 The 1970s-era home has been modernized with a sleek kitchen, elegant woodworking and modern appliances. 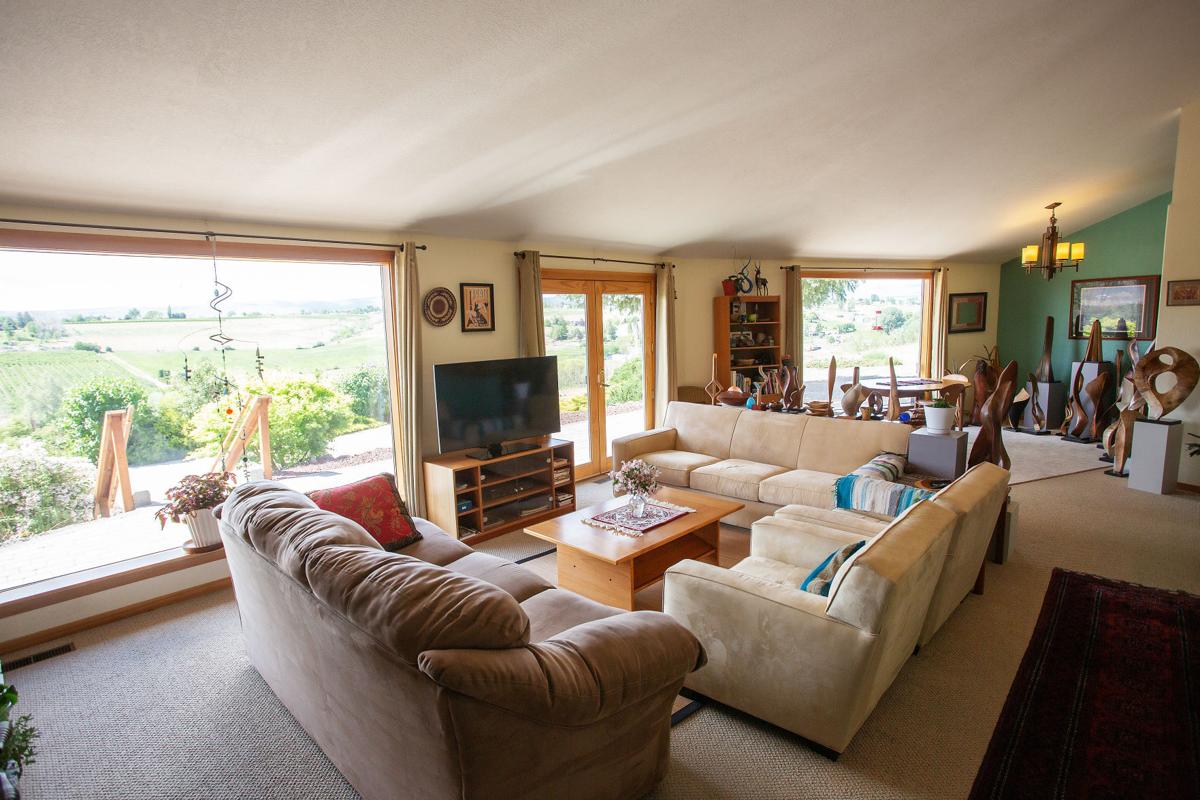 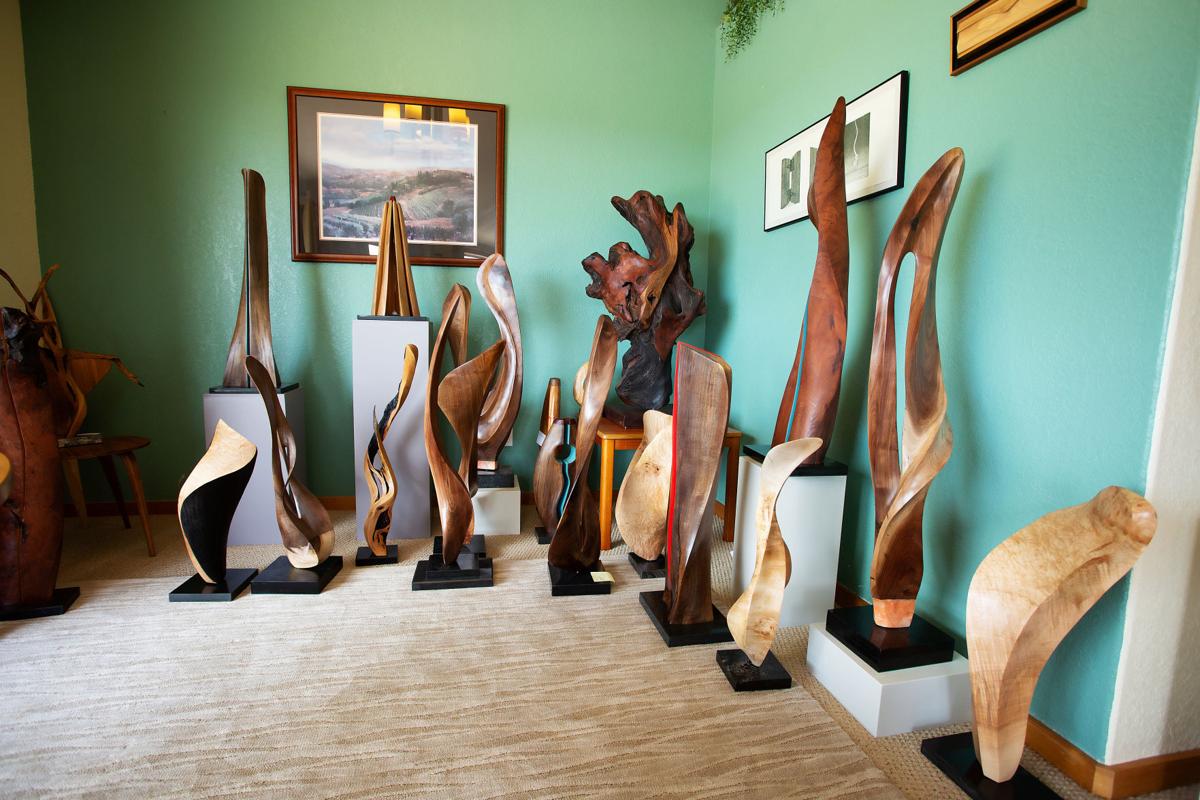 Some of Randal Leek's graceful wood sculptures will be on display in a Colorado show later this year. 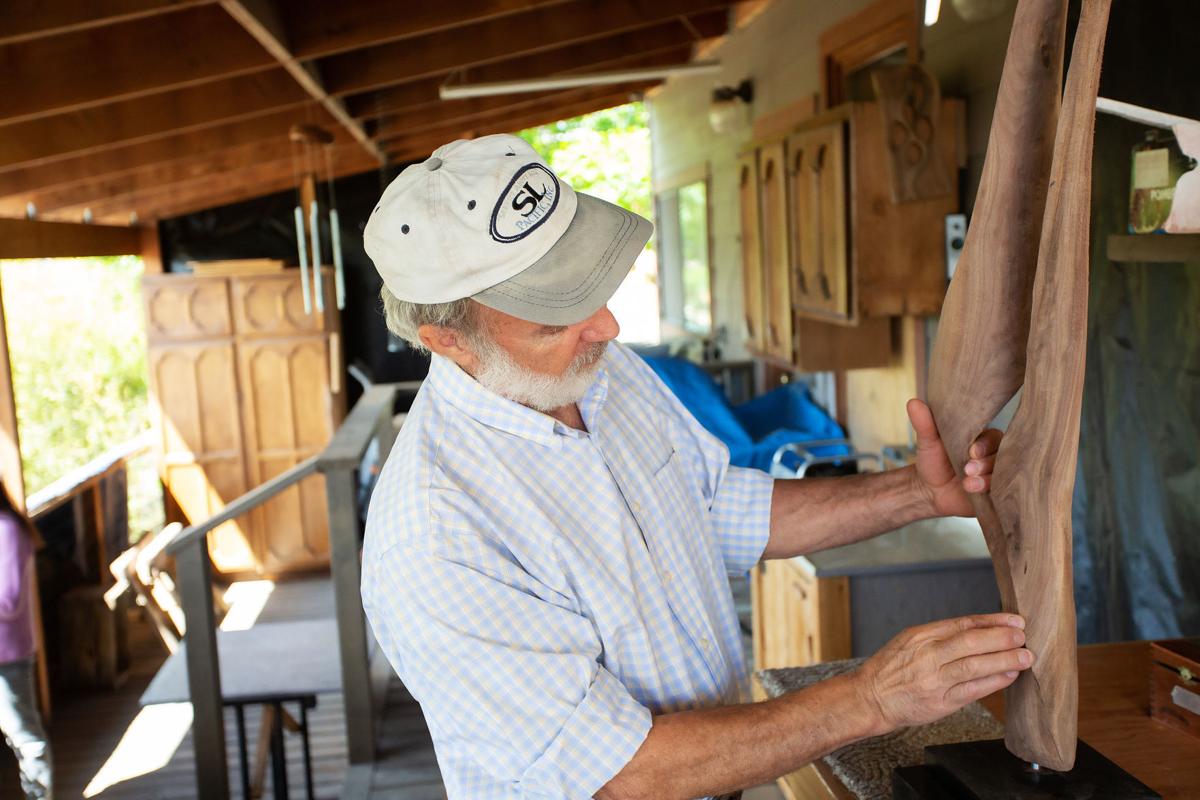 Now that he's retired, Randal Leek has more time to pursue his passions in his workshop. 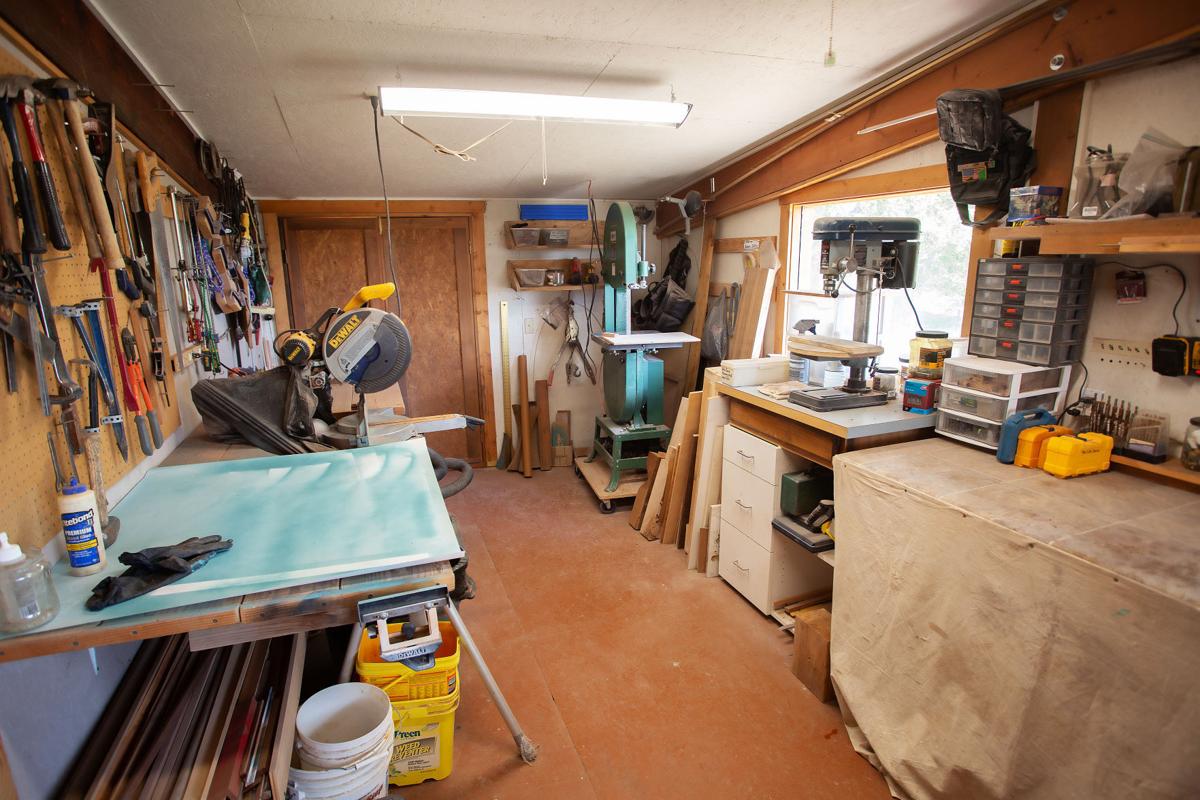 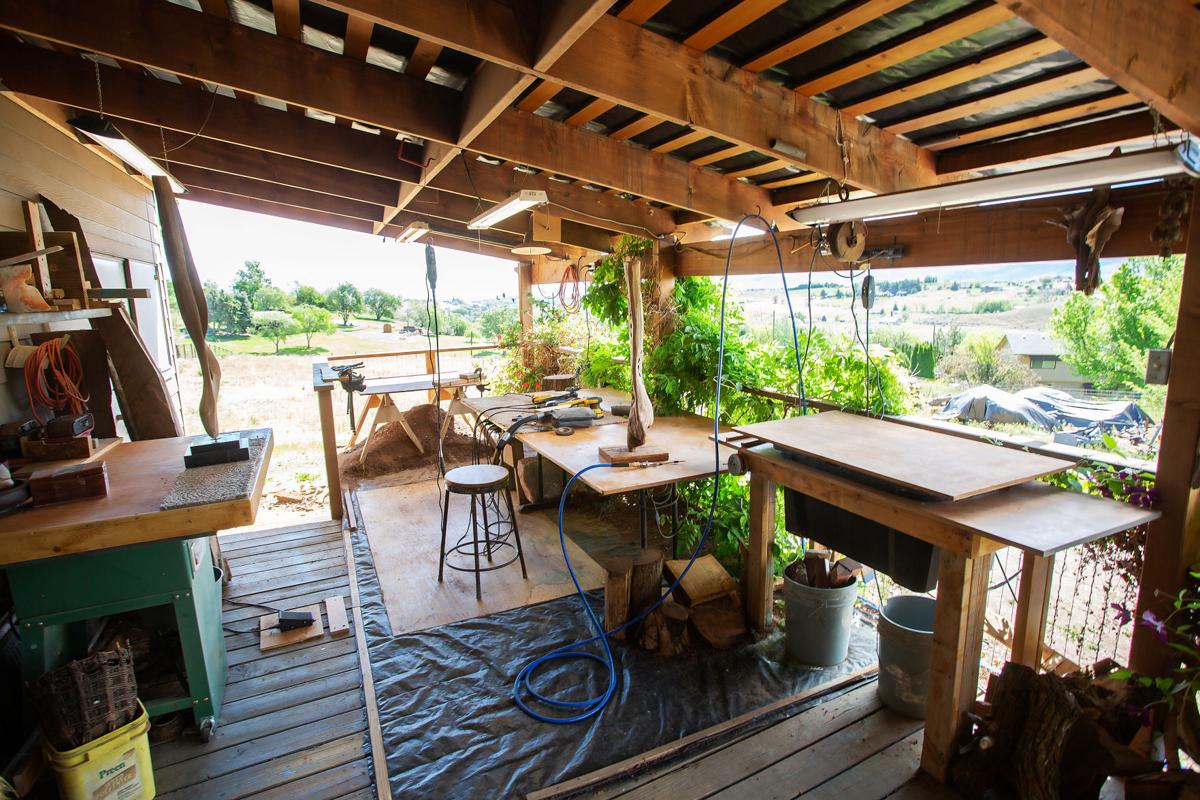 When the weather's good, the woodworking can move outside. 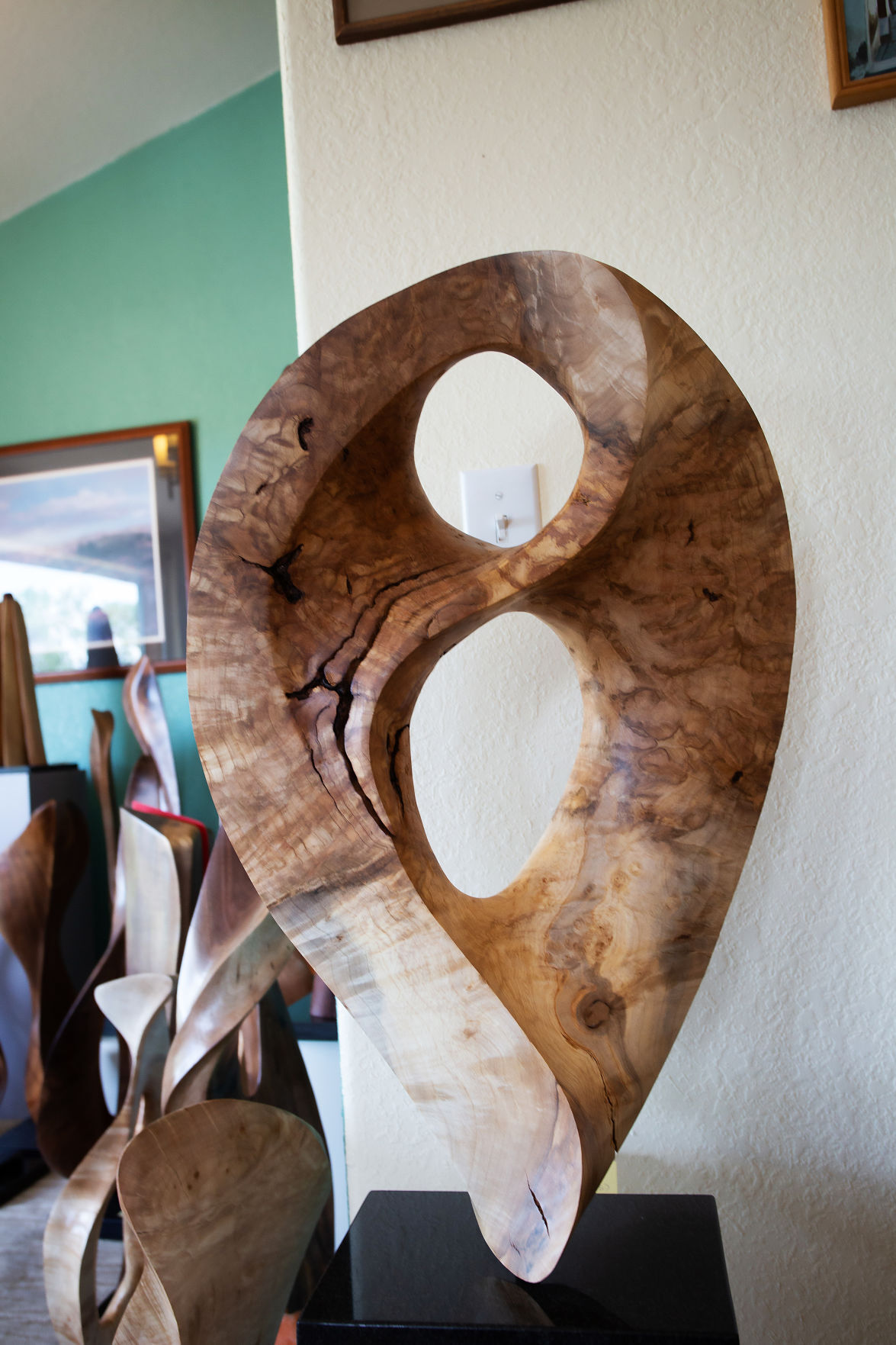 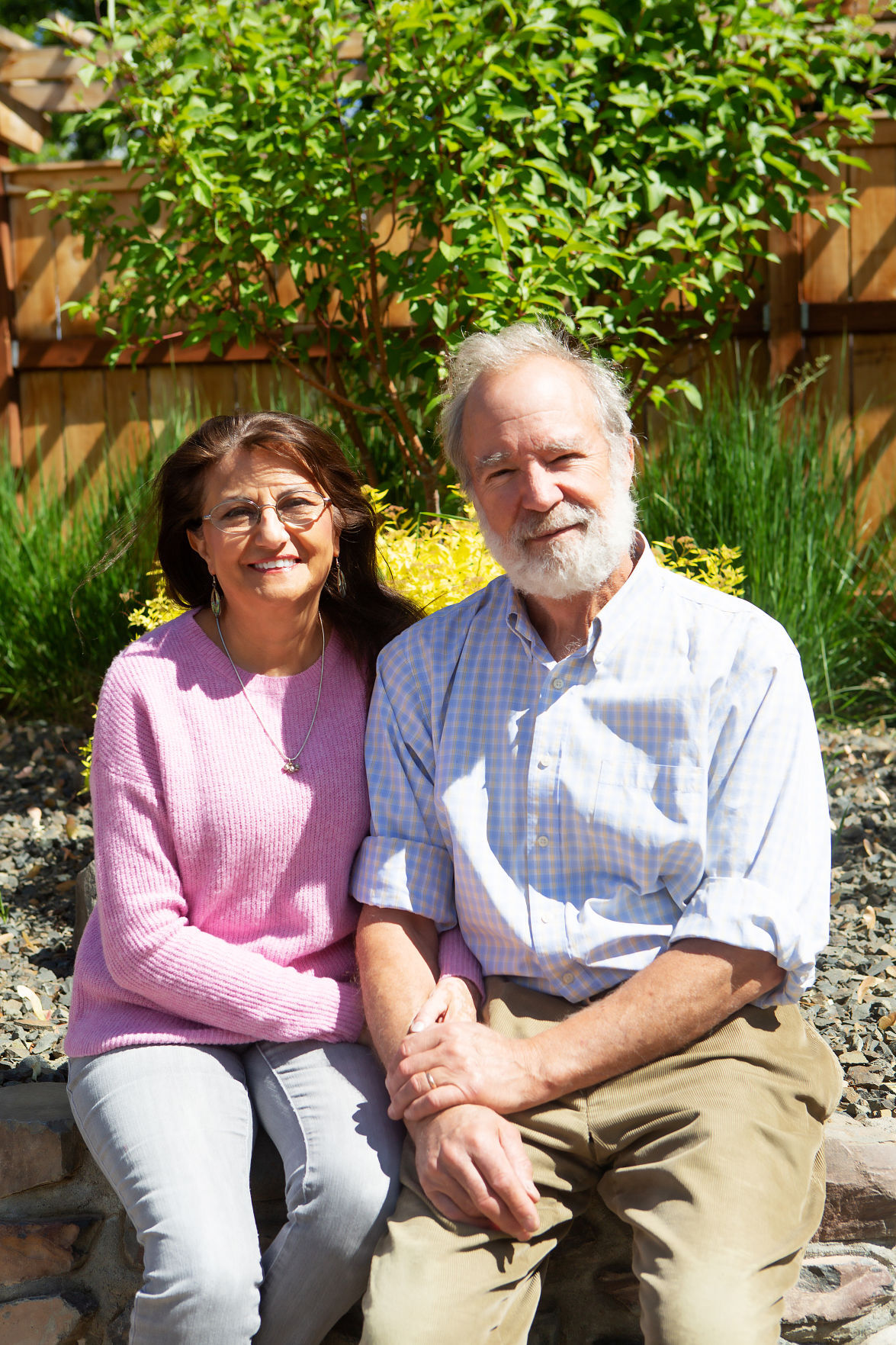 Randal Leek and Farida Farajullayeva-Leek realized they needed room to breathe, so they moved into a 3,200-square-foot home in West Valley. 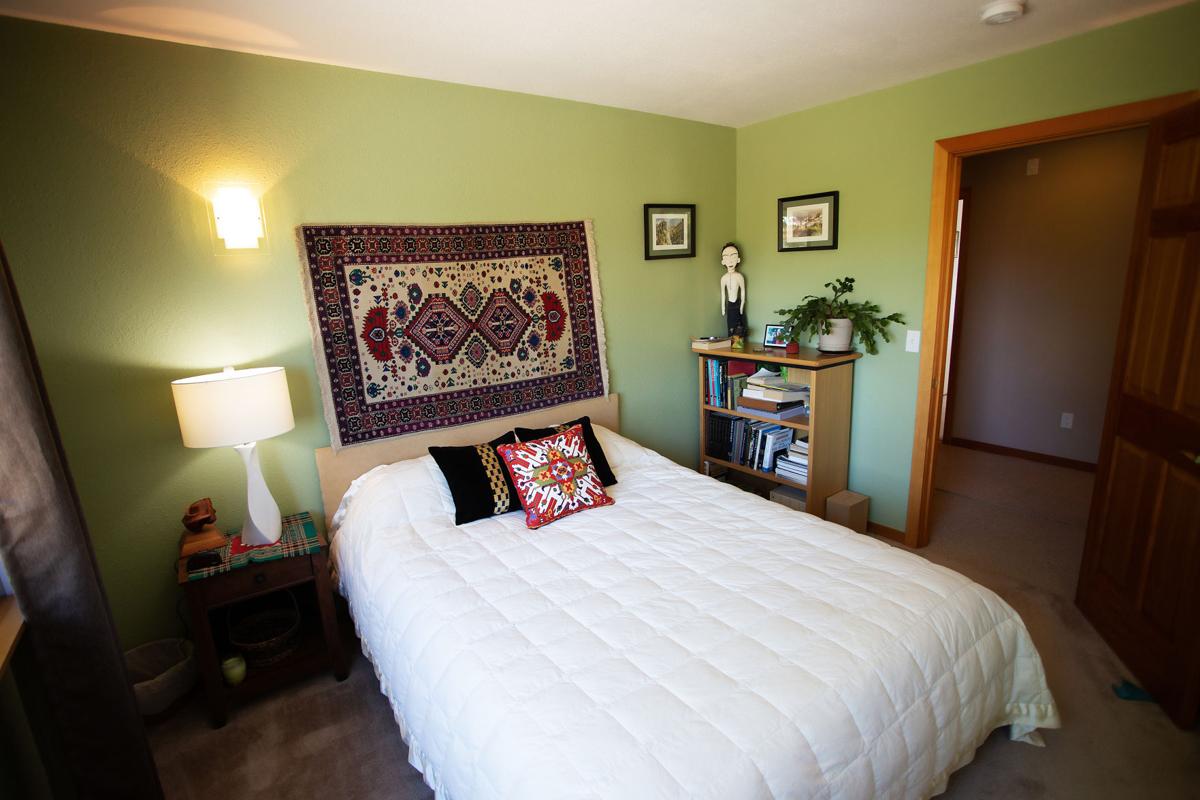 A bedroom wall tapestry hints at the couple's international travels. 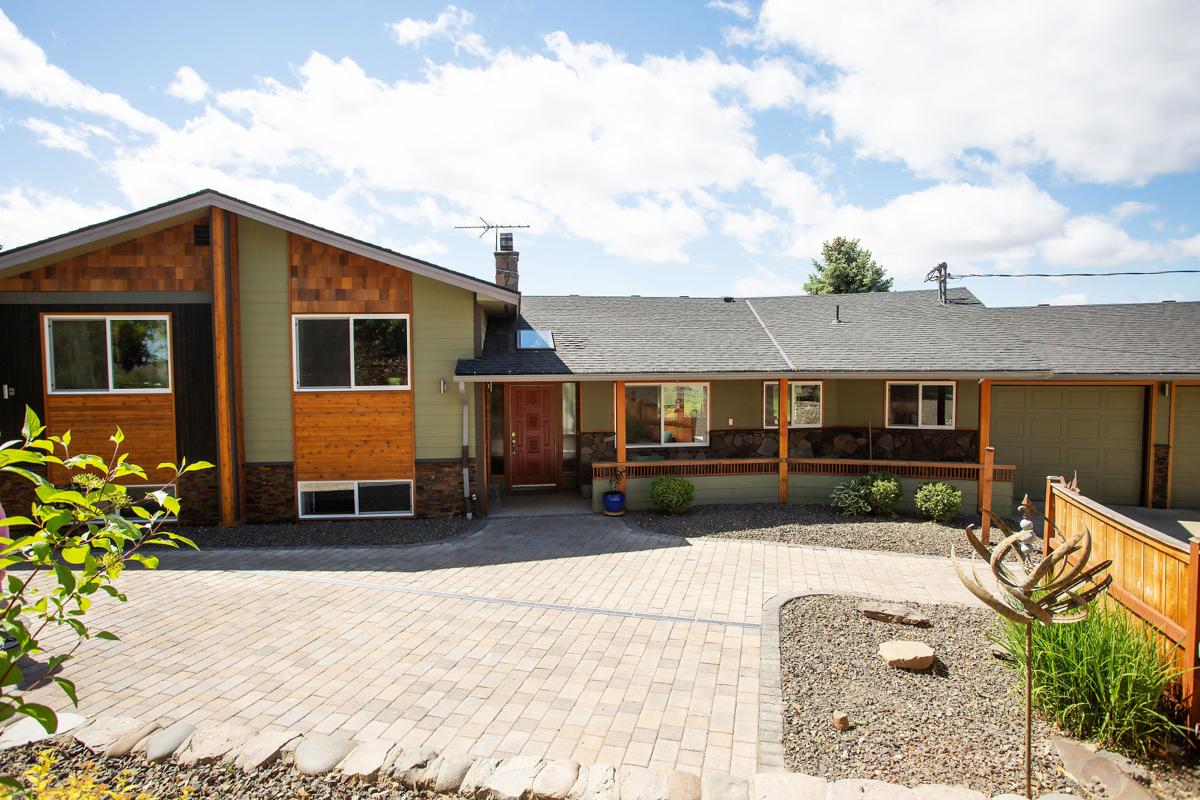 The sprawling ranch-style home of Randal Leek and Farida Farajullayeva-Leek sat empty for two years before they moved in.

Xeriscape-style landscaping adds to the openness of the home and property.

The 1970s-era home has been modernized with a sleek kitchen, elegant woodworking and modern appliances.

Some of Randal Leek's graceful wood sculptures will be on display in a Colorado show later this year.

Now that he's retired, Randal Leek has more time to pursue his passions in his workshop.

When the weather's good, the woodworking can move outside.

Randal Leek and Farida Farajullayeva-Leek realized they needed room to breathe, so they moved into a 3,200-square-foot home in West Valley.

A bedroom wall tapestry hints at the couple's international travels.

The sprawling ranch-style home of Randal Leek and Farida Farajullayeva-Leek sat empty for two years before they moved in.

While I was looking for a home to feature in this issue of Yakima Magazine, my husband mentioned that he knew of a wonderful couple who have a fascinating story and live out in West Valley. I wasted no time giving them a call and happily for me, they agreed. As it turns out, the house they live in is only a part of their amazing tale.

The drive to their house involved traveling on asphalt roads, concrete roads, dirt roads — and just as we were about to start looking for the Yellow Brick Road, we arrived at the house where Randal Leek and his wife, Farida Farajullayeva-Leek, were waiting by their front door.

When asked how they found their large ranch style home, they explained that when they moved to Yakima, they purchased a house in town. After a few years they realized that they wanted to live in the country, where they could own some acreage. In 2008 they found a listing for a four-bedroom house (circa 1976), that was west of greater Yakima and offered 3,200 square feet of living space. The one thing the ad didn’t mention was that the house had been vacant for nearly two years. But even that didn’t hinder their decision to buy the property, which also came with nine acres of land that runs downhill to Wide Hollow Creek.

The couple knew when they claimed ownership that the home needed major remodeling, inside and out. Fortunately, Randal is an excellent carpenter and Farida has an amazing eye for interior design. She informed me that the front exterior of the house had been totally remodeled, predominantly by Randal. Additionally, he laid the bricks to create a welcoming country courtyard just beyond their front door.

Inside, our first stop was their open, high-ceilinged kitchen, adjacent to their living room. When the Leeks took ownership, the kitchen had tall cupboards that obstructed any view into the living room. It didn’t take Farida long to decide that the kitchen needed to be remodeled so that whoever was doing the cooking could create culinary magic and still entertain guests without being hidden behind a wall of wood.

Their living/dining room takes up the south side of the main floor. A dramatic rock wall and comfortable furnishings on the east side of the room make for a perfect place to sip a glass of wine while enjoying the view from the south-facing wall of picture windows. When supper is announced, the guests only have to stroll across the room to a spacious table for a delicious dinner.

Since the house is so big, Farida found the location of the original laundry room too far away from the home’s main floor. So the couple created a convenient laundry space just off the kitchen. In addition, Randal remodeled their master bathroom, adjacent to their bedroom, essentially doing all the work from kitchen to laundry to bath in four months. Next he’s planning to start a major remodel on the southern exterior of their house, which has a well-worn balcony just outside their bedroom suite.

Randal grew up in the Puget Sound region, getting his B.S. from Central Washington University. Eventually, he and Farida both graduated with M.S. degrees in biological systems engineering from Washington State University. He ultimately ended up working for international organizations dedicated to humanitarian assistance, including, UNICEF, Save the Children and CARE.

For 20 years his work took him to far-off countries such as Tajikistan, Azerbaijan, Albania, India, Pakistan, Sudan. He met his beautiful wife, Farida, in Azerbaijan and in 1997 they married and eventually moved back to the United States.

Farida, who speaks four languages, is employed by the Department of Ecology Office of the Columbia River and, happily, can work from her home office.

Today, Randal is retired and has taken up the creation of amazing sculptures from large pieces of wood. He has always been intrigued by the mysteries and potential of redwood, black walnut, cedar, etc., and now that he’s retired, he has the time to really pursue the hobby that originally took hold while he was in Afghanistan.

“I found with wood there were natural lines,” Randal explained. Where others saw rot or diseased markings, he saw beautiful colors and went forward by creating fascinating fine art from these humble pieces of wood.

Today a great deal of his woodworking magic happens inside and outside of the workshop that’s just steps away from his house. The interior is filled with tools and equipment, new and used.

The shop has become his own woodworker’s dream. He loves taking the imperfections in a piece of wood and transforming it into a beautiful piece of art. He’s become so successful at entering art shows that this year he’s gearing up to display his sculptures in several different galleries around the Pacific Northwest.

Randal is excited about having been juried into the “Sculpture in the Garden” show August 6-8 in Loveland, Colorado. Perhaps the easiest to access would be the “Folding Space” exhibit being held throughout June at the Northwind Art Center in Port Townsend.

While Central Washington is their forever home, the couple celebrates their international travels throughout their house. From a lovely wall tapestry in their bedroom, to photographs and artwork from faraway countries where they’ve worked and visited, the memories they share are always close at hand.

Beyond Randal’s amazing wood projects and Farida’s interior design, the pair plan to continue updating their property. It was a pleasure to meet such an interesting and talented couple and I’m pretty sure we’ll hear more about Randal’s wood sculptures in the future.