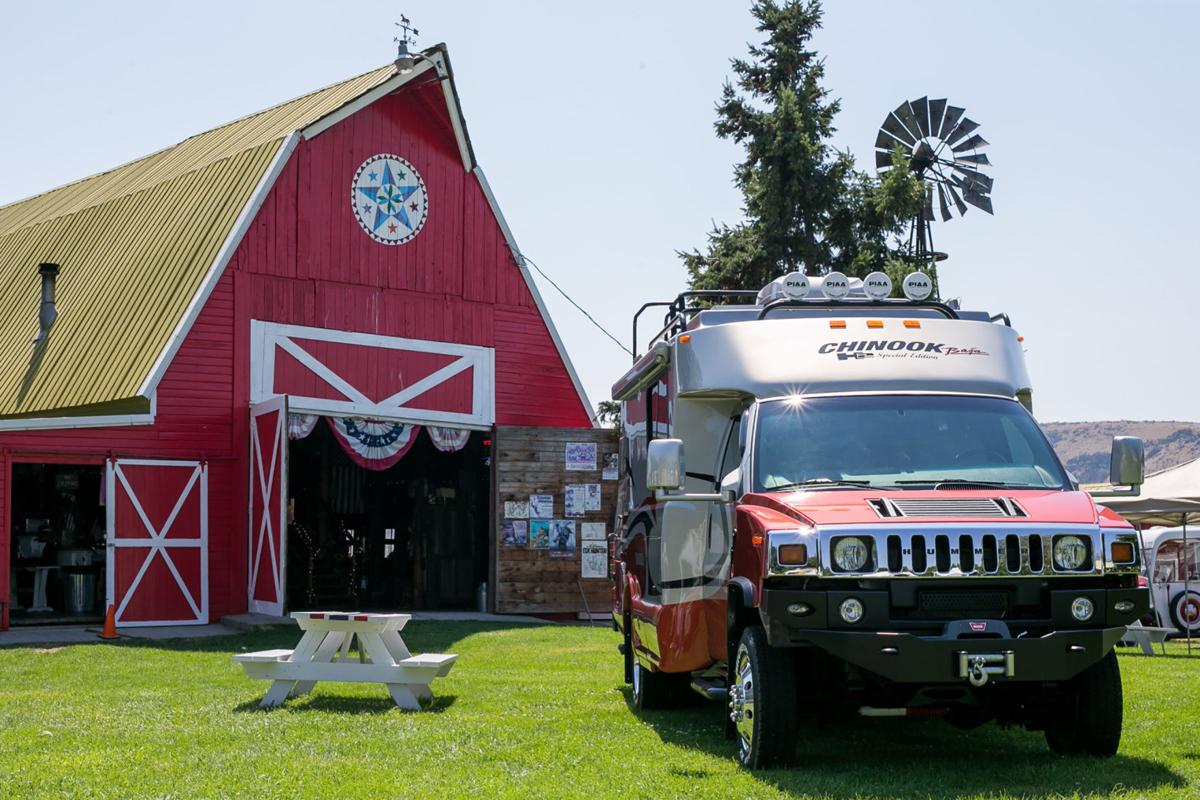 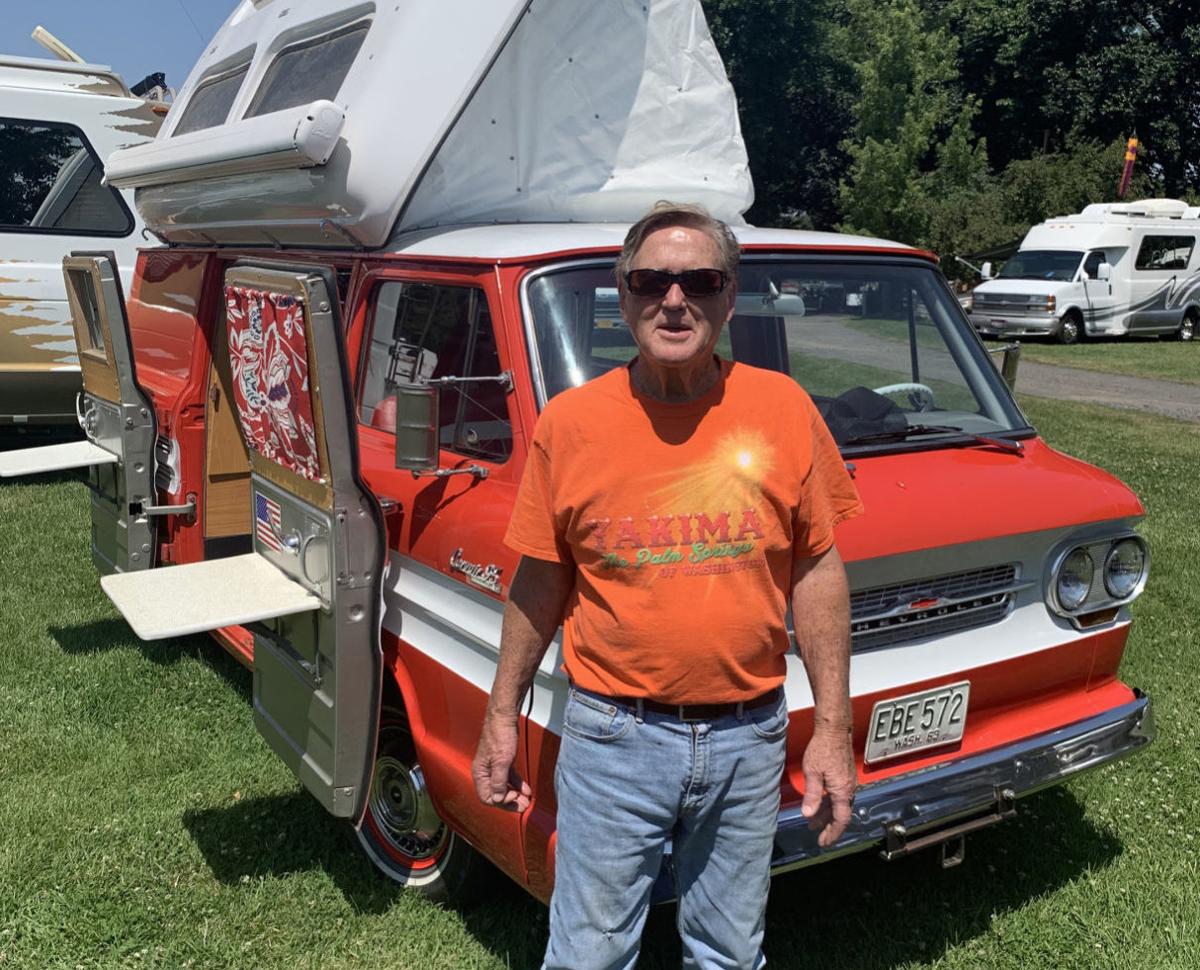 Gary Lukehart with the Chevrolet Corvair van he converted to a camper in 1962. It slept his entire family of five. 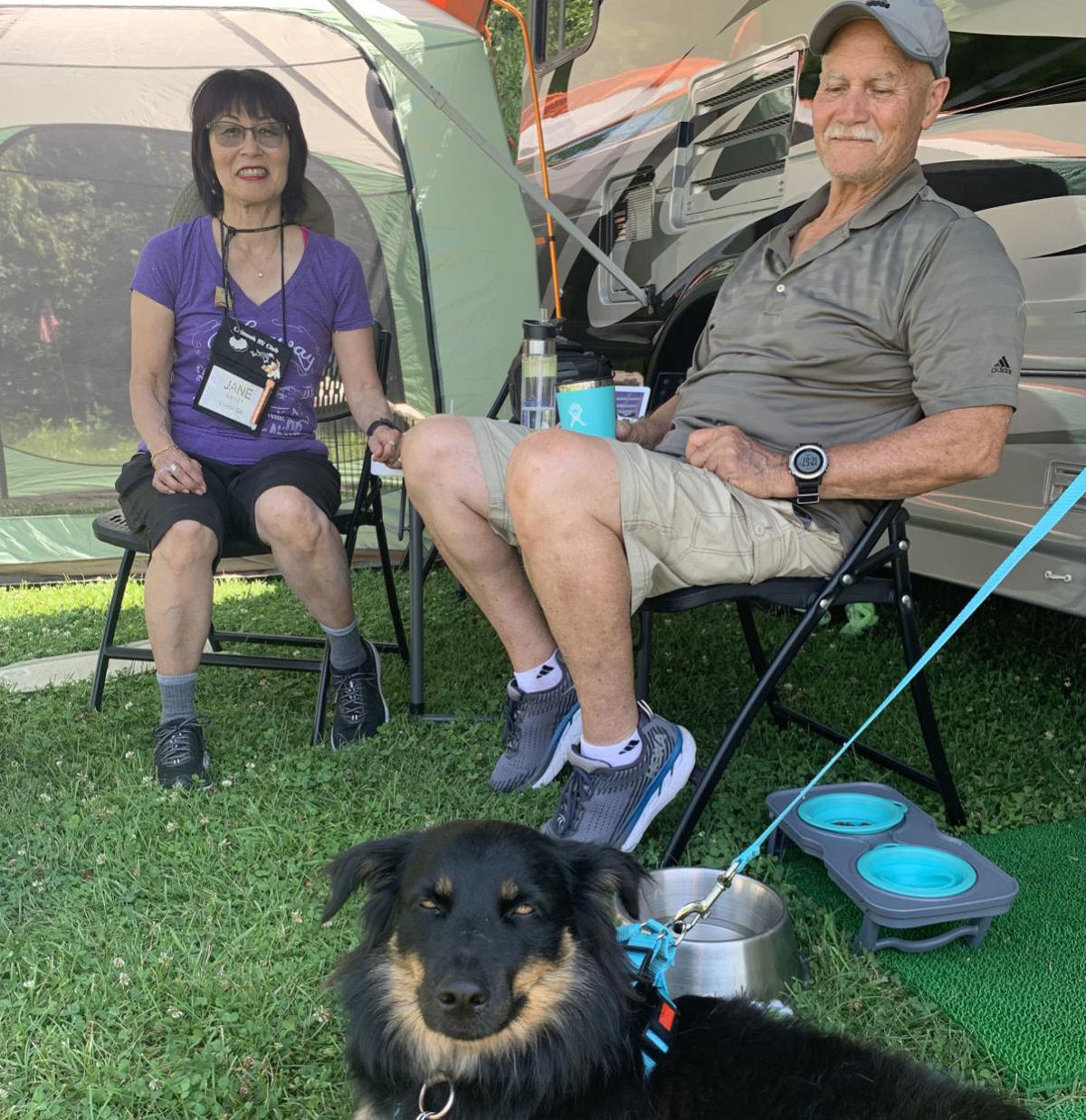 Jane and Jerry Early of Covina, Calif., with their dog Sachi. 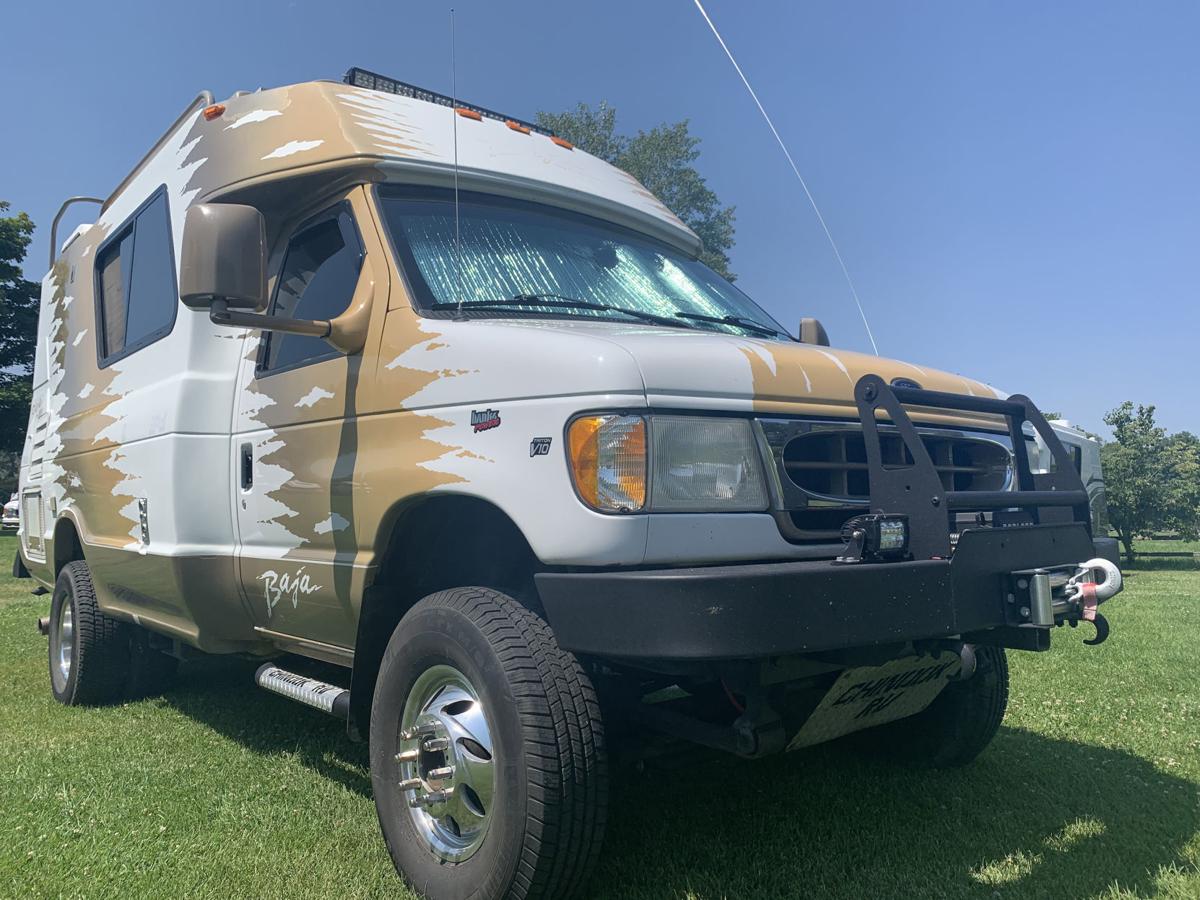 The company only made 25 Baja models. Just 21 feet long, this one is compact and easy to maneuver. 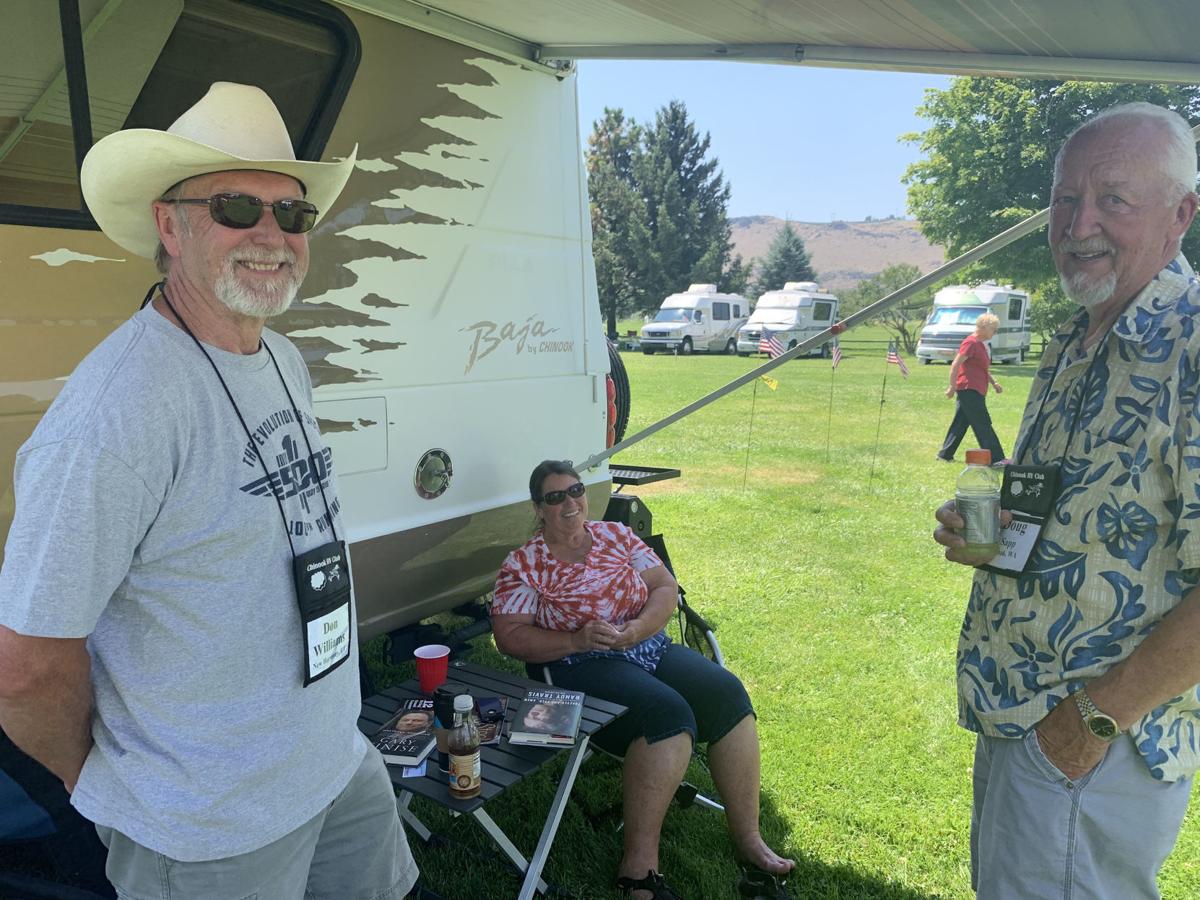 L to R: Don Williams of New Harmony, Utah, and his wife Lauri, with Doug Sapp of Omak, Wash. 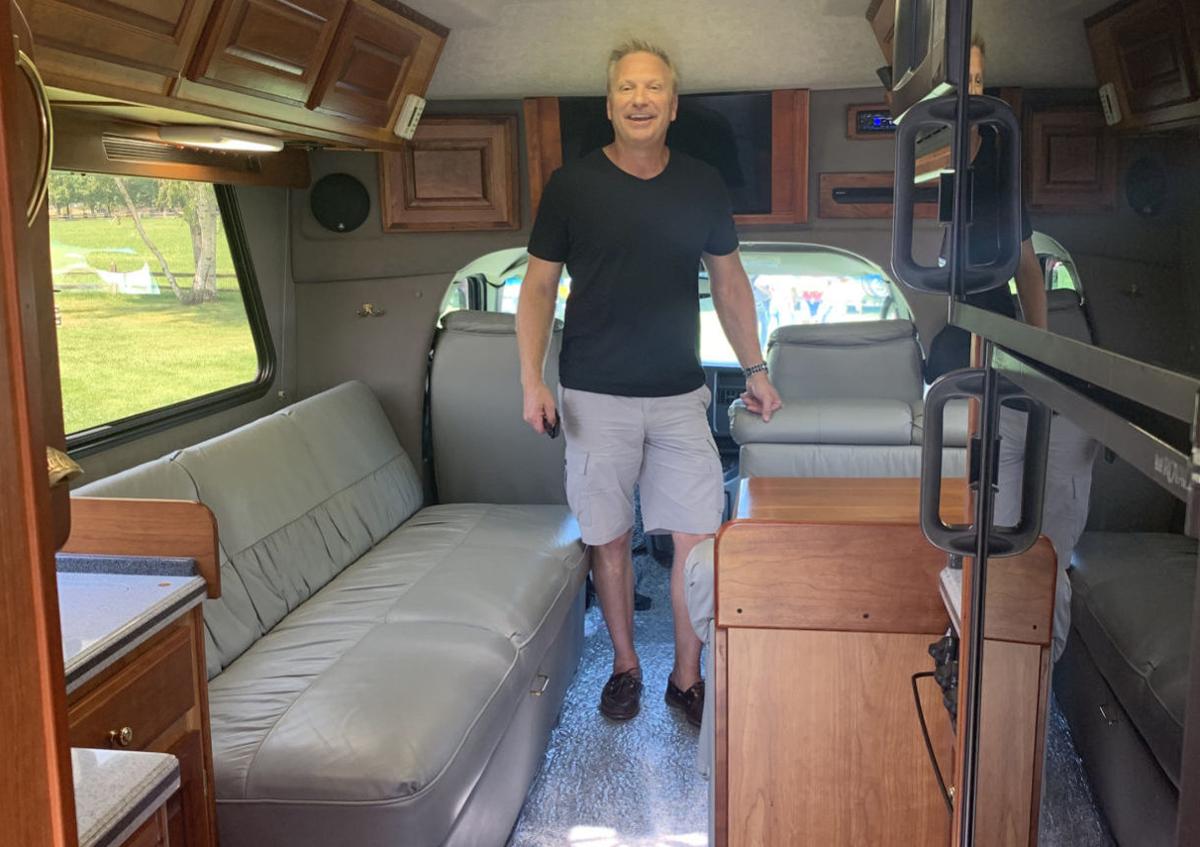 Mike Johnson of Yakima, inside the one and only "Chummer," which is outfitted with the finest materials available when it was built in 2005. 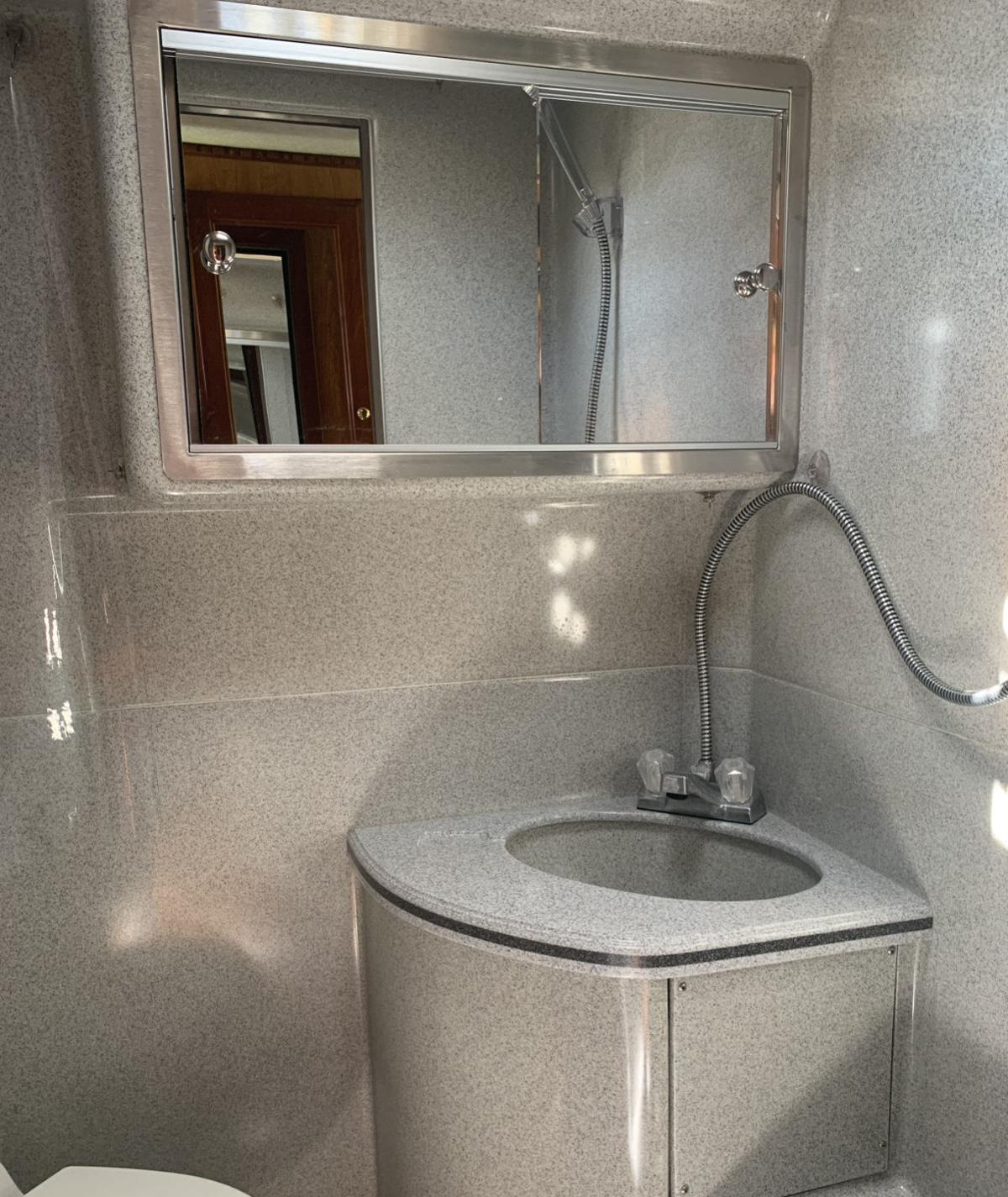 The Chummer has a large bathroom with Corian surfaces. 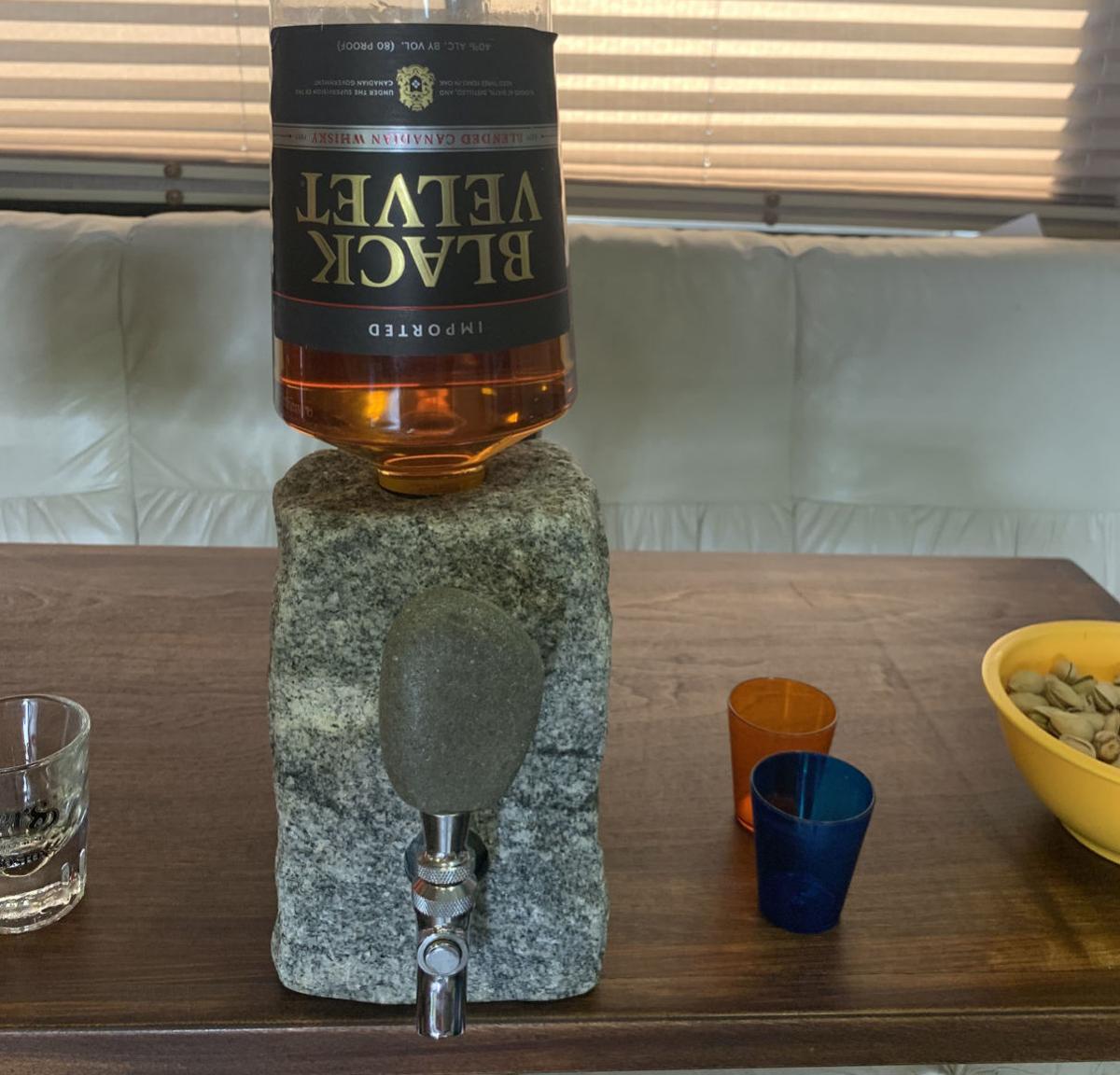 One rig featured a liquor dispenser made out of a block of granite, which is kept in the freezer until cocktail hour, so you can pour an ice-cold shot.

Gary Lukehart with the Chevrolet Corvair van he converted to a camper in 1962. It slept his entire family of five.

Jane and Jerry Early of Covina, Calif., with their dog Sachi.

The company only made 25 Baja models. Just 21 feet long, this one is compact and easy to maneuver.

L to R: Don Williams of New Harmony, Utah, and his wife Lauri, with Doug Sapp of Omak, Wash.

Mike Johnson of Yakima, inside the one and only "Chummer," which is outfitted with the finest materials available when it was built in 2005.

The Chummer has a large bathroom with Corian surfaces.

One rig featured a liquor dispenser made out of a block of granite, which is kept in the freezer until cocktail hour, so you can pour an ice-cold shot.

The Chinook Trail Wagons rally in Naches is like a neighborhood on wheels. Nearly 30 Chinook RVs are parked on a manicured lawn near shade trees, a burbling creek and a big red party barn where people gather to exchange stories about their beloved vehicles.

Chinook RVs are known as “the sports car of motor homes,” and their owners wouldn’t think of vacationing in anything else. All of them want to chat with the owner of this sprawling property known as Running Springs Ranch, because he’s the guy who invented the Chinook.

Gary Lukehart didn’t set out to become an RV manufacturer, much less the creator of motor homes so unique and durable they have a cult following. The story of how he got into the business starts where he grew up, in Southern California, when he searched for a more comfortable alternative to outdoor camping but couldn’t find a trailer or truck camper he liked. So, in 1962, he converted his tomato-red Chevrolet Corvair van into a mini-camper.

He proudly points it out at the rally, calling it the first RV he ever made. It’s tiny, but it accommodated his entire family of five. He and his wife Mary slept in a small foldout bed in back, the twins slept in cots in a pop-up section on top, and their son got the front seat. Everywhere they went, people wanted to check it out.

“People would say ‘Jeez, you ought to start building these things,’ and that got me into the biz,” Gary said.

He started mass-producing the brightly colored vehicles, nicknamed “surfer vans,” and ended up making about 200 of them.

But he had bigger goals. He began producing larger units with a solid, one-piece fiberglass shell mounted on a Ford or Chevy chassis in 1971. That was the year he moved the family to Yakima, merged his company with an existing company called Chinook, and the Chinook RV was born. They were manufactured at a plant in Union Gap.

He estimates he built around 50,000 Chinooks altogether, including the Toyota Chinook, his most popular model.

“It was a unique product back in the early ‘70s,” he said. “They were the answer to the economy when gas was hard to get. We came out with it in ’73.”

Why do people love Chinooks so much?

“I think it’s the design and the products that we used to manufacture it,” Gary said. “Most of the RVs in the early days were just a chassis with a wood frame and aluminum on the sides like a big box.”

Chinooks were built to last. They’ve got a solid fiberglass unibody, many with luxury details like leather couches, solid wood cabinets and Corian kitchen and bathroom finishes. They run like a Swiss watch, according to Don Williams, who traveled from Harmony, Utah, to attend the July rally.

“I’ve never had to do anything to it but change the oil,” he said.

That quality didn’t come cheap. Gary said the retail cost ranged from $50,000 to $125,000 back in the early 2000s, way more than other rigs like the Winnebago. That was a lot for something that was much more compact than the huge, modern RVs that trundle down the highway these days. Some Class A motor homes, at 45 feet long, are larger than a city bus. Just the thought of driving one can be intimidating, much less backing it up.

Don’s 21-footer is small enough to maneuver easily, and it has other advantages as well.

“Our Chinook has four-wheel drive so we can take it off-road up in the mountains and kind of dock it out in the middle of a big pasture somewhere and just have a good time. So it’s the perfect rig for our lifestyle,” he said.

It’s one of only 25 Baja models the company made, which gives it even more cachet. But the most unique model is the one and only Chinook Hummer, known as the “Chummer.” Mike Johnson of Yakima is the proud owner. He said Gary wanted to impress attendees at the big annual industry show in Louisville, Ky., in 2005.

“Everybody brings out their big guns when they go to the show with their newest, latest, trickest item, so they came up with this idea. It stole the show,” Mike said.

It’s got an actual Hummer nose on a Chevrolet chassis, with four-wheel drive, a winch on the front, heavy-duty steel bumpers, heated holding tanks and a big solar panel.

“Central vac, power couch, full leather couch that folds out to a king-size bed — it was finished out with their finest materials at the time,” Mike said.

On a rack on the back is a shovel in case you get buried in snow or mud, as well as a special jack and a fuel can. The entire back bumper is actually a 150-psi compressor unit so you can pump up the heavy-duty tires or inflate a raft.

Naturally, the Chummer gets some attention.

“You can’t believe it. You know how good it looks, but when you go to RV spots, or you’re fueling up, people just flock over saying ‘What IS that?’ I’ve never had a vehicle that draws the attention of this,” Mike said, describing what happens every time he pulls into a gas station: “We had three or four people coming in saying ‘Yay!’ and they were screaming and wanting to come in and video it, so we let them. It’s that kind of an eye-catcher.”

But all good things must end. The Union Gap plant closed in 2006, as Gary transitioned into a career as a real estate developer. He sold the brand in 2013, and Chinook RVs started rolling off the assembly line again four years ago in Indiana.

But it’s the ones made back in the day, right here in the Yakima Valley, that inspire fans so much that they traveled in their Chinook RVs, from as far away as Missouri, to attend this July rally and hobnob with their fellow owners.

As Mike said, “They’re still recognized to this day as a leader in the industry.”