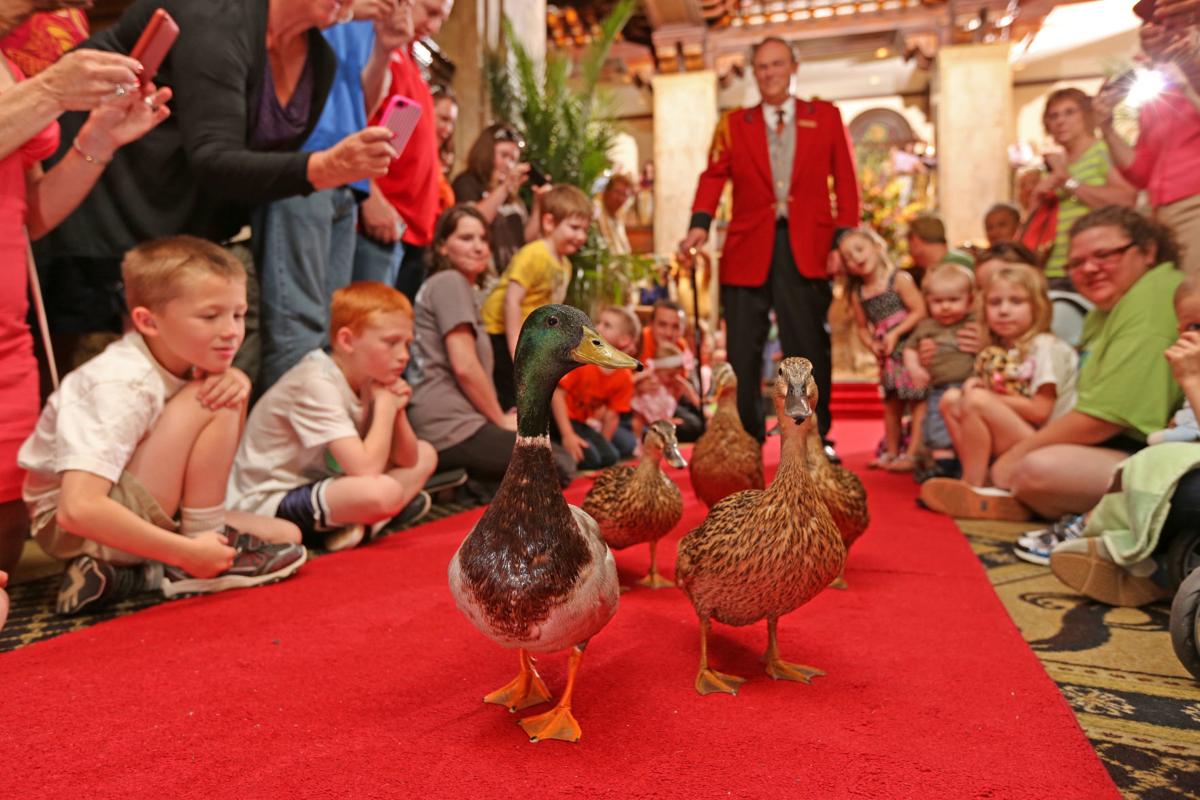 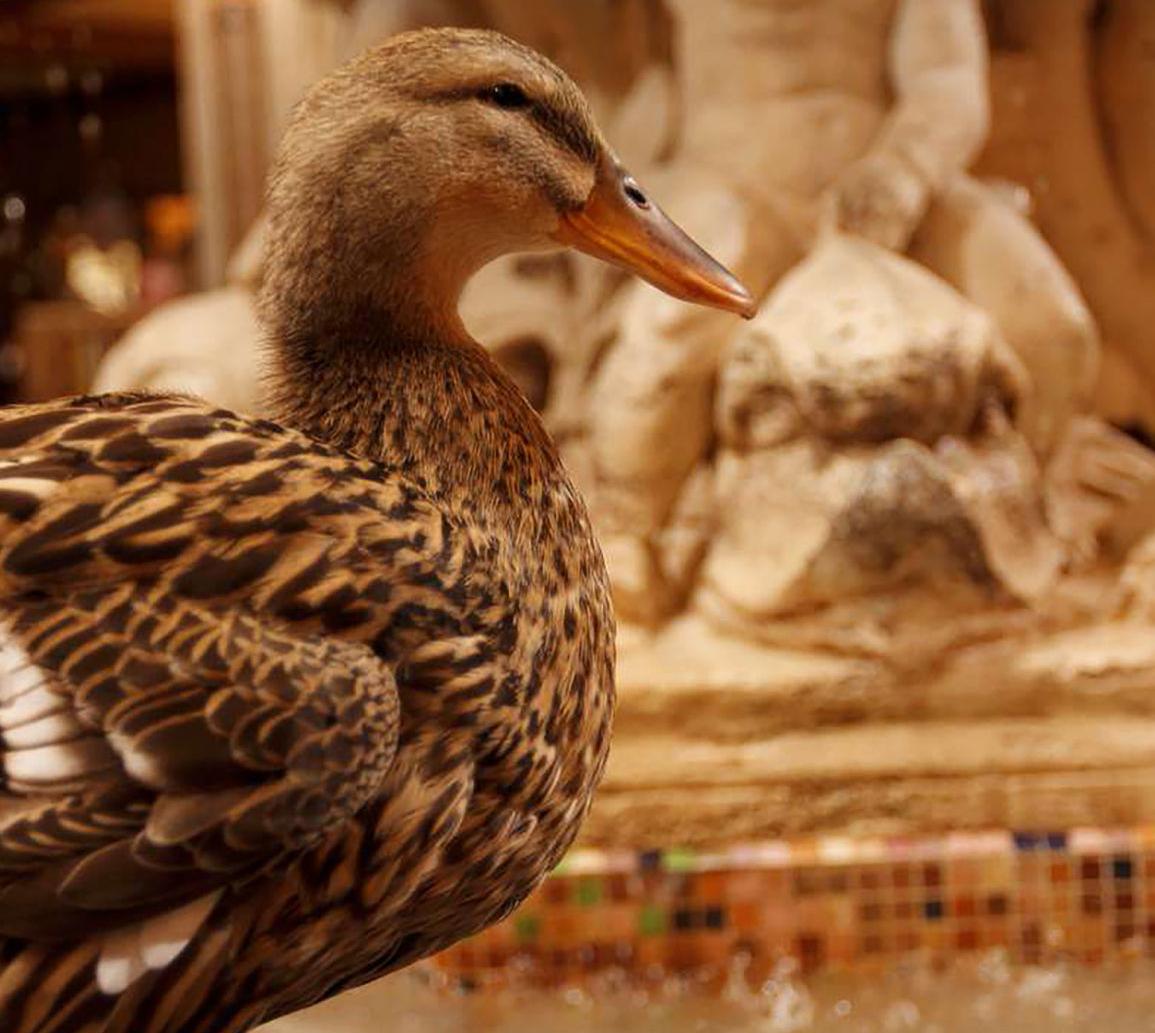 One of the Peabody ducks enjoying a dip in the fountain. 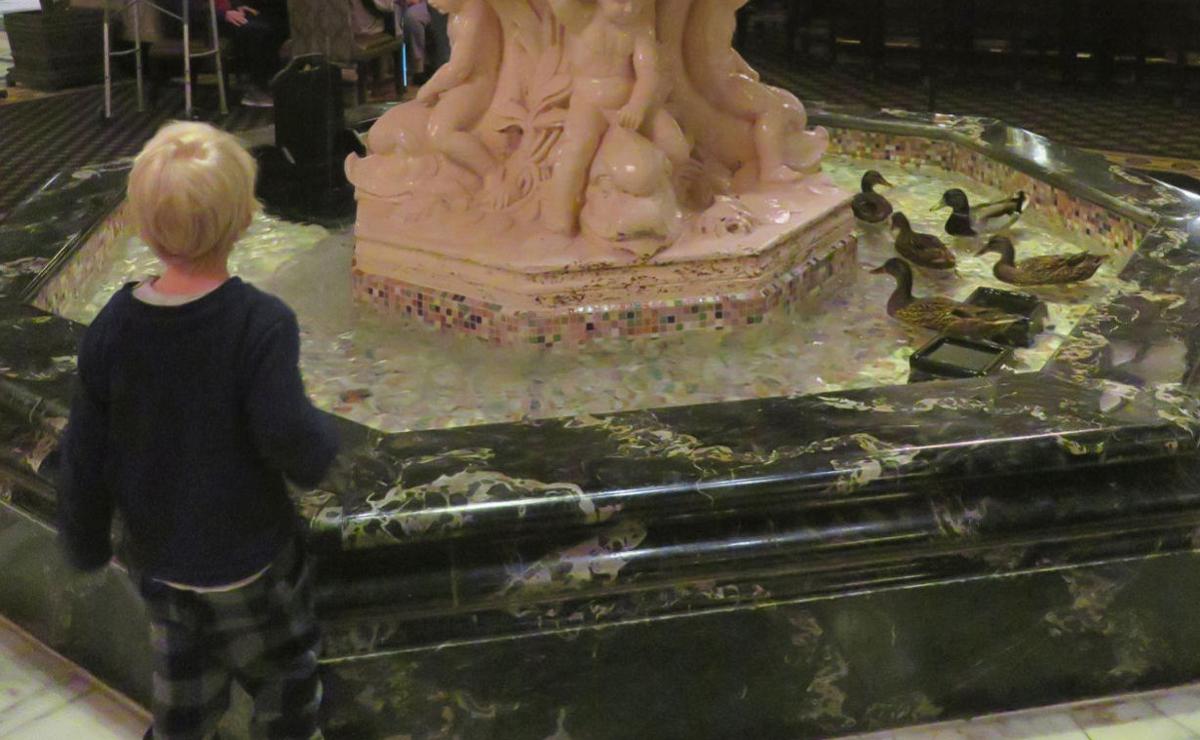 The ducks are an endless source of fascination for visiting children. 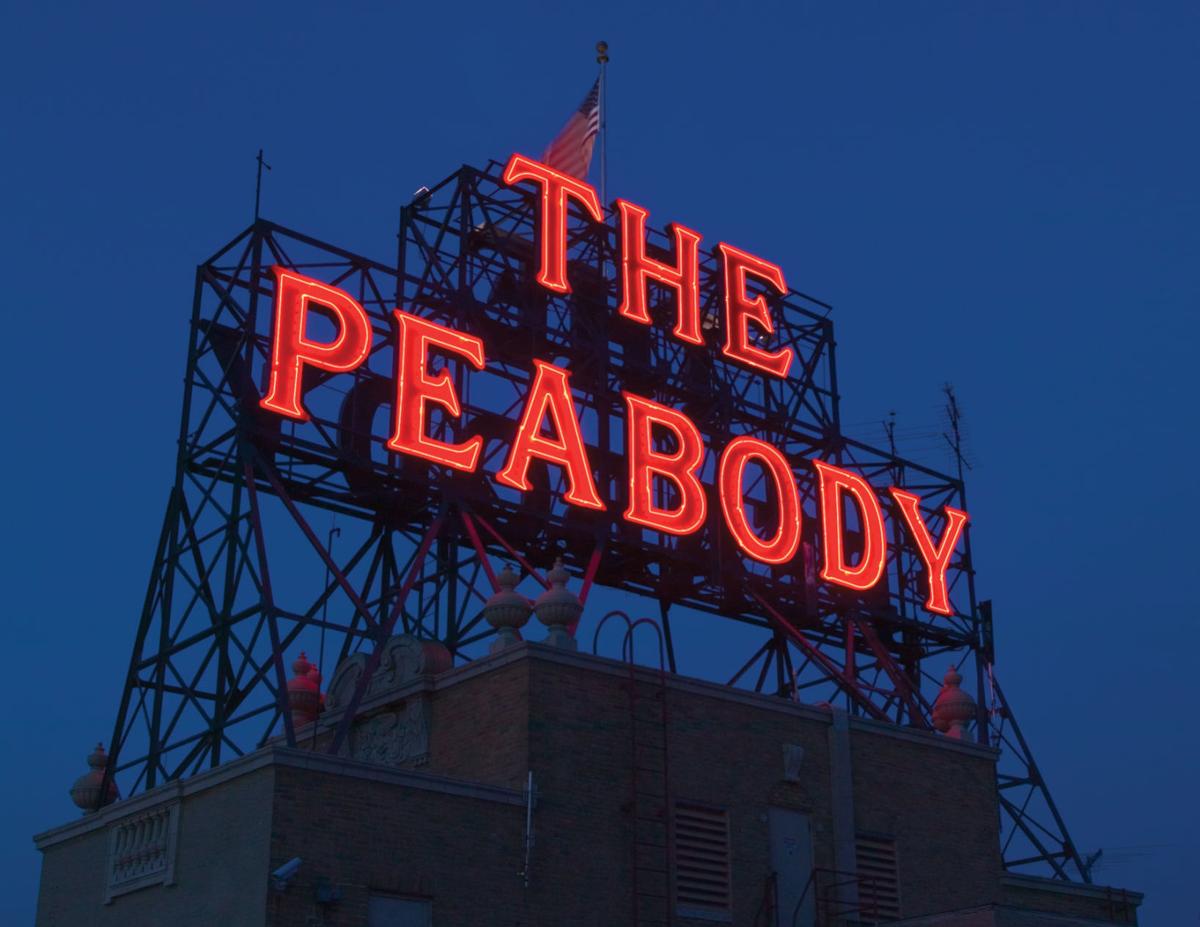 The Peabody Hotel is a Memphis icon. It opened in 1869 and is listed on the National Register of Historic Places. 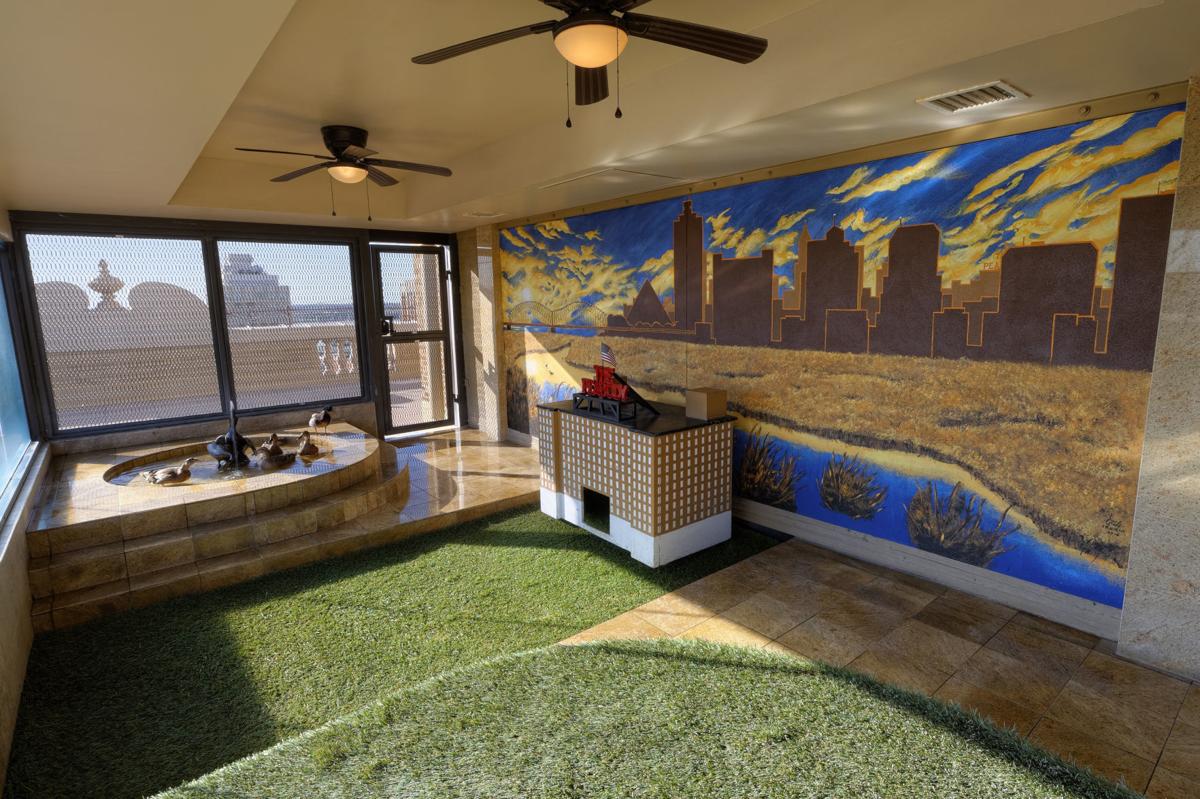 This area on the rooftop, called the "Royal Duck Palace," is where the ducks chill out between appearances.

The grand lobby has plenty of room to accommodate the crowds. An average of 1,200 spectators come to see the ducks each day.

One of the Peabody ducks enjoying a dip in the fountain.

The ducks are an endless source of fascination for visiting children.

The Peabody Hotel is a Memphis icon. It opened in 1869 and is listed on the National Register of Historic Places.

This area on the rooftop, called the "Royal Duck Palace," is where the ducks chill out between appearances.

The grand lobby has plenty of room to accommodate the crowds. An average of 1,200 spectators come to see the ducks each day.

Excitement is building in the hotel lobby. A crowd pushes forward to the wide ribbons cordoning off the red carpet. Children and their parents sit on the ground, lining both sides of the carpet, eagerly awaiting the celebrities. Spectators repeatedly check the time and raise their cellphones, ready to take pictures. Finally, the elevator doors open and the stars emerge.

Pop idols? Movie icons? No, it’s The Peabody Memphis Hotel ducks, who quickly waddle out of the elevator and begin their march down the red carpet to a large fountain in the center of the elegant lobby. Doug Weatherford, the “duckmaster” who supervises the birds, walks behind them, resplendent in a red jacket with gold epaulets and black slacks.

The five ducks enthusiastically jump into the ornate fountain and begin swimming circular laps, just as they do at 11 a.m. every day of the year. At 5 p.m., they’ll reverse the course and waddle back to the elevator. Then, they begin the ascent to their rooftop, $200,000 “Royal Duck Palace” where they live in fowl splendor, looking out over Memphis, Tenn., from the best vantage point of this historic edifice, which opened in 1869.

The ducks reside in what is described as a “Florida room,” with a shed roof, plexiglass front and mesh sides, Weatherford said. Inside, there is a wooden replica of the Peabody Hotel that all of the ducks can enter. There’s also a granite fountain they can enjoy, with a duck figurine spraying water, and an astroturf lawn for waddling about.

The tradition of the Peabody ducks began in the 1930s, according to hotel information. One day, a couple of men who had returned from a hunting trip and had a little too much to drink, thought it would be hilarious to place a few of their live duck decoys in The Peabody Memphis fountain. The idea caught on and grew to become the current tradition with ducks on parade. For more than 50 years, a former animal trainer with the circus taught the ducks to march and delivered them to the fountain each day, retiring in 1991 to be replaced over the years by subsequent duckmasters.

Every attempt is made to allow the ducks to retain their wild nature, said Weatherford. They are not named, held or petted, and each group of five mallards remains only about three months at the Peabody. Then, they are returned to the family farm which supplies them to the hotel. They have the chance to regrow some of the feathers which have been clipped (to keep them from flying off the hotel roof, for example) and, after a few months, can fly off if they wish or remain on the farm. Then, another five mallards (always one drake and four hens) will have their shot at stardom.

There is some overlap of duck contingents, as new recruits are trained, said Weatherford, who also serves as hotel historian, leading tours and giving lectures. At first, the new group is given about a week to observe procedures, and begin to set their “internal alarm clock” for the daily schedule. Then they begin “on-the-job training,” marching inside fencing on the roof for another 10 days or so before they hit the red carpet.

Ducks tend to be habitual, as in their habit of flying north and south, so they take to the routine, like — well, a duck to water.

Weatherford has learned over time not to become too personally attached to his small brood, since they will soon be moving on. However, they do have “individual personalities … and occasionally one fixates on you,” he said.

In spending about three hours each day with the ducks, as he does, you can learn a little about human psychology by watching them and seeing patterns of dominance and other behaviors, he suggested.

In the past, Peabody hotels in Orlando, Fla., and Little Rock, Ark., also featured ducks on parade but that has ended as hotels changed branding. Plans are afoot, however, to add duck marches at another Peabody hotel near Dallas.

The Peabody ducks seem to have a universal appeal, with some folks traveling thousands of miles specifically to see them march, Weatherford said. He estimates that an average of 1,200 spectators come daily, with 300 for each march and another 600 who watch the ducks swim in the fountain. If a convention or sports event is in town, as many as 900 people may come at once, cramming the mezzanine balcony and the main floor to try to catch a glimpse of the spectacle.

At a time when the world is quickly changing and so much history is being “reinterpreted,” the simple, decades-long tradition of the duck march can be reassuring, Weatherford believes.

“It’s something that gives us a little bit of comfort that all is still right with the world; we don’t need to alter everything,” he said.