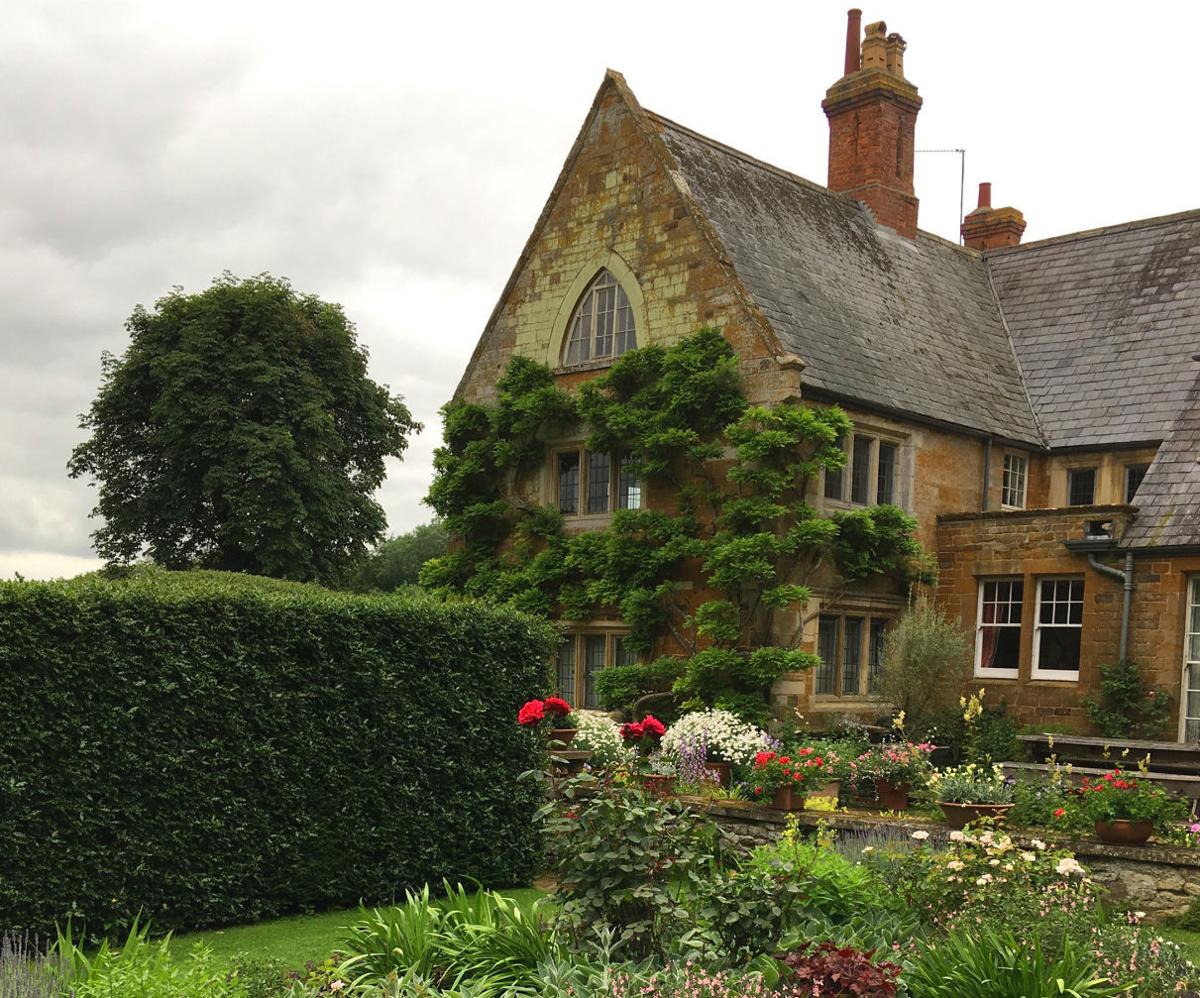 Coton Manor in Northamptonshire, England, was built in 1662 and has 10 acres of gardens. 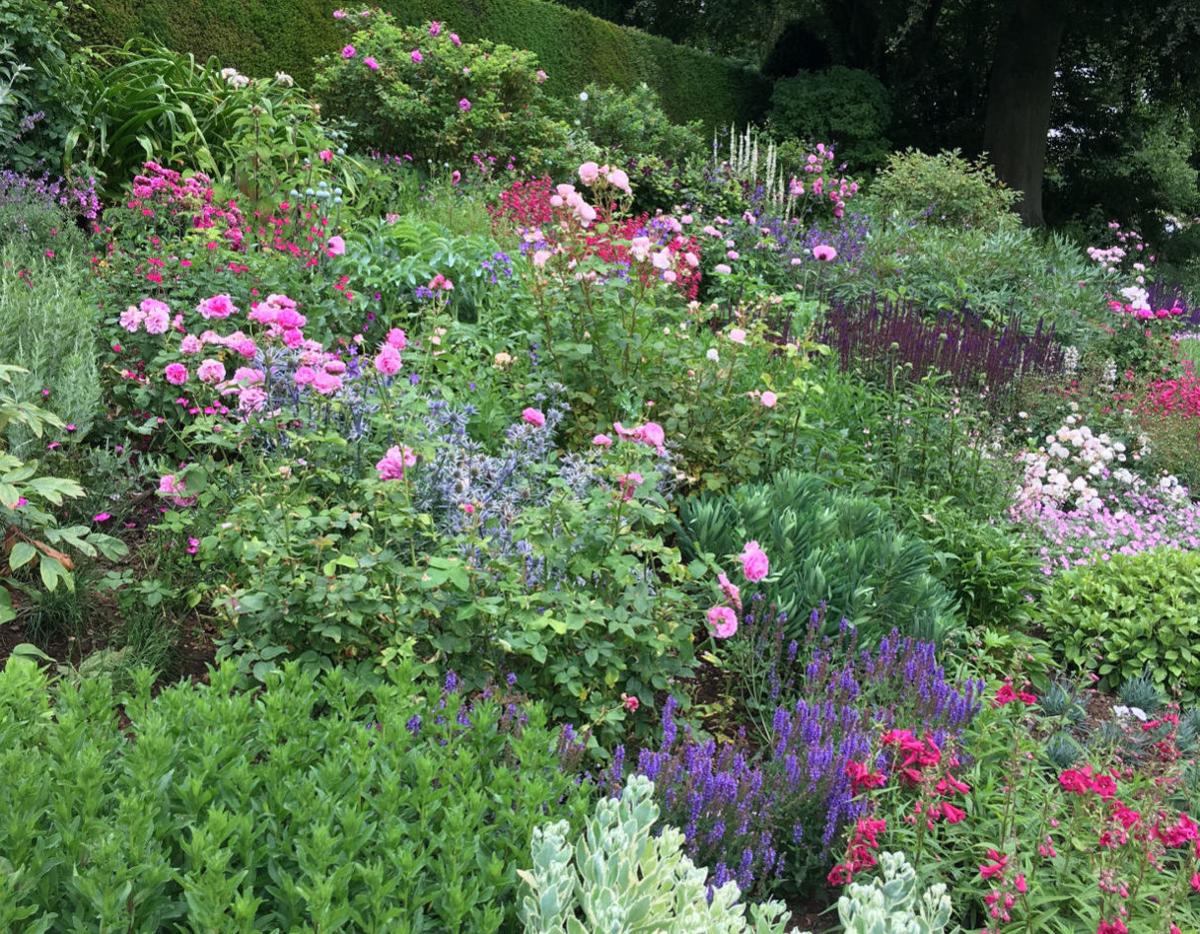 One of many sumptuous borders at Coton Manor. 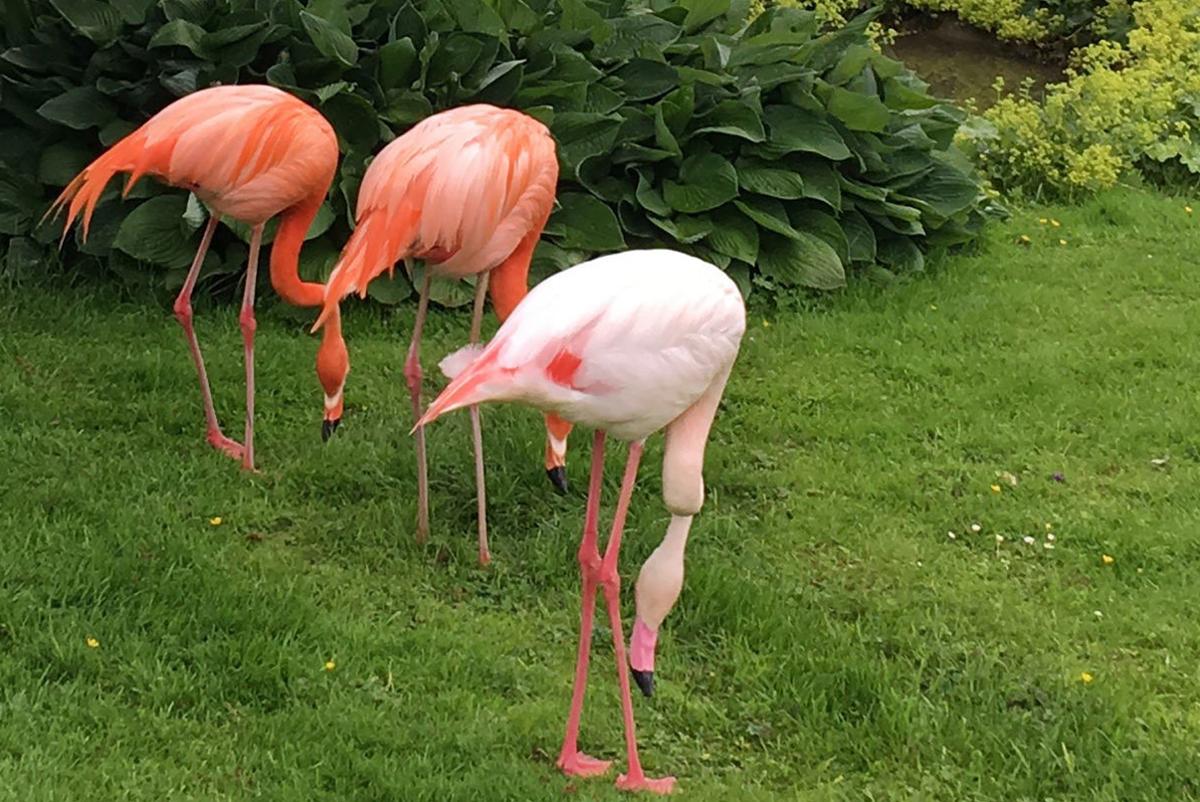 You wouldn't think you'd see flamingos in England, but there they were, parading in an open area of the garden. 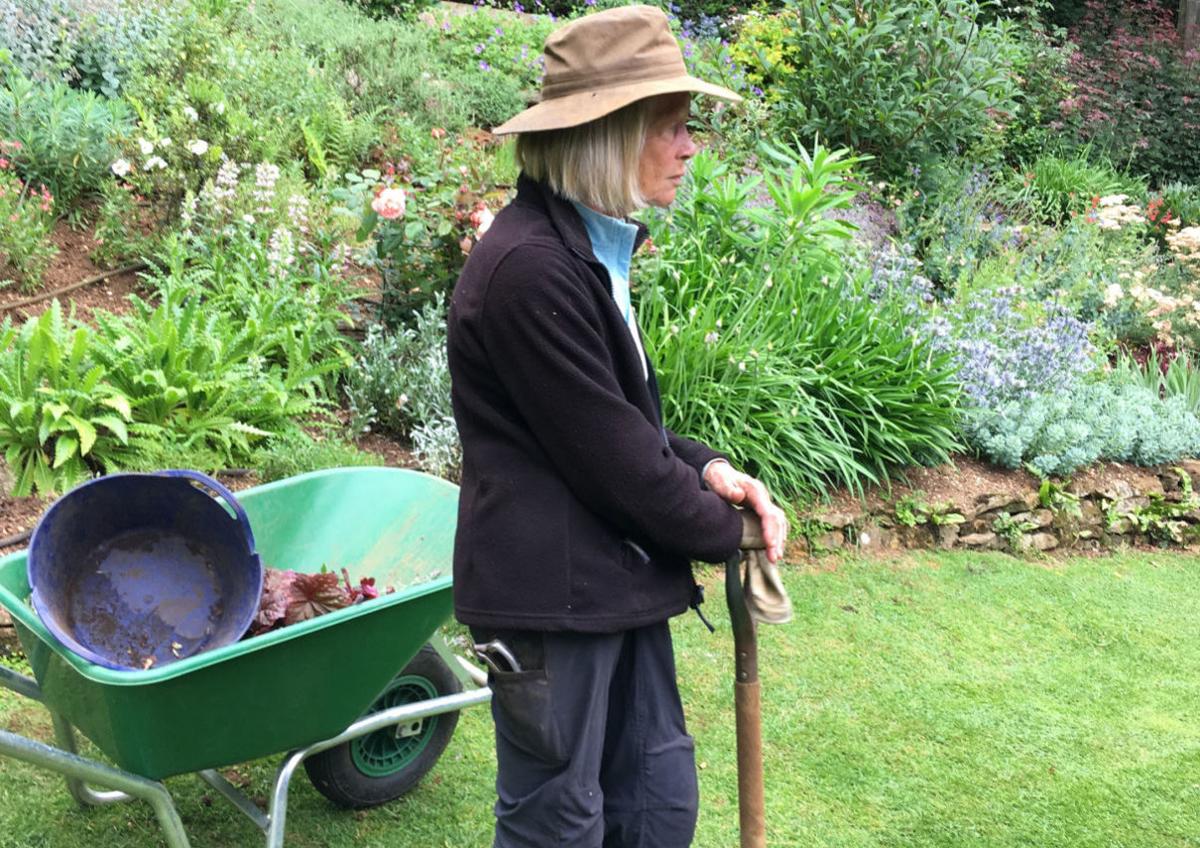 Much to Carol's surprise, there was Coton Manor's owner, Susie Pasley-Tyler, working away in her massive garden. She's out there every day for hours on end. 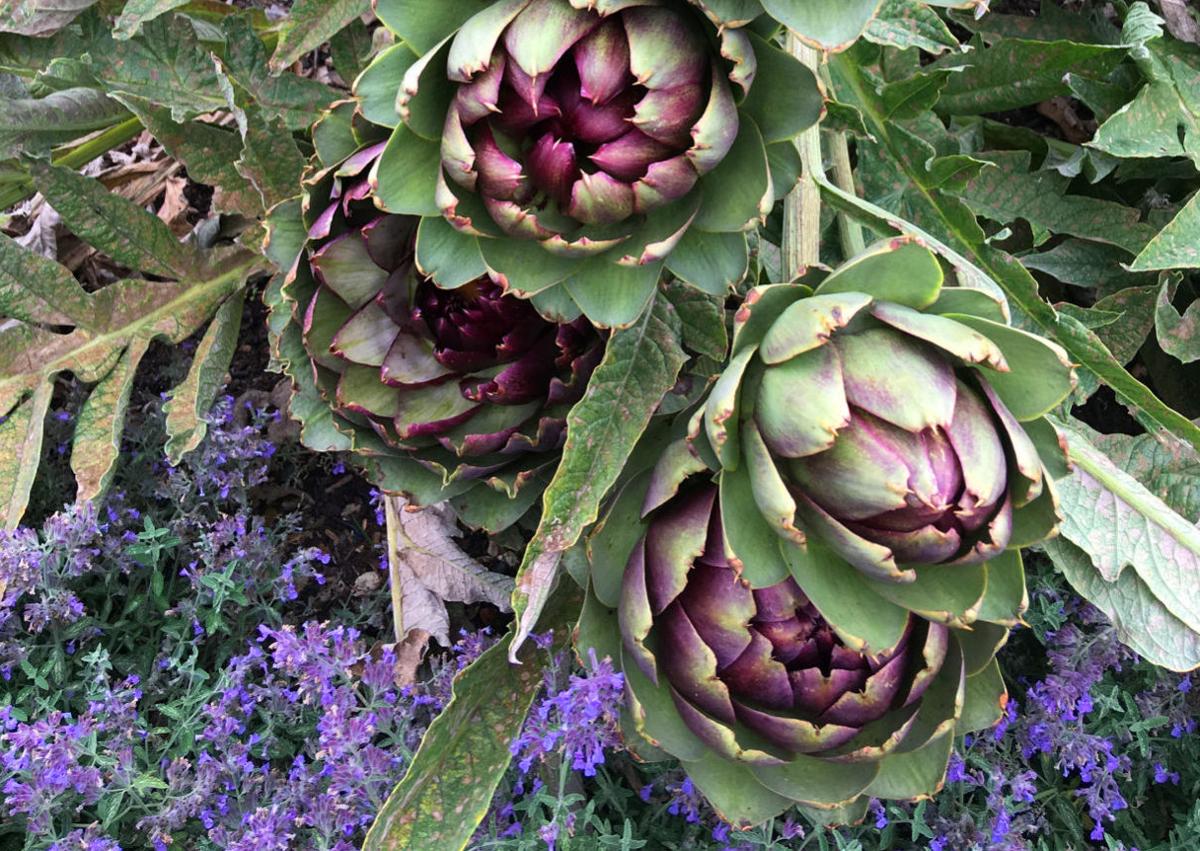 The Old Vicarage at East Ruston is said to be "a garden that should be on everybody's bucket list" and has some of the most gorgeous container plantings Carol has ever seen. 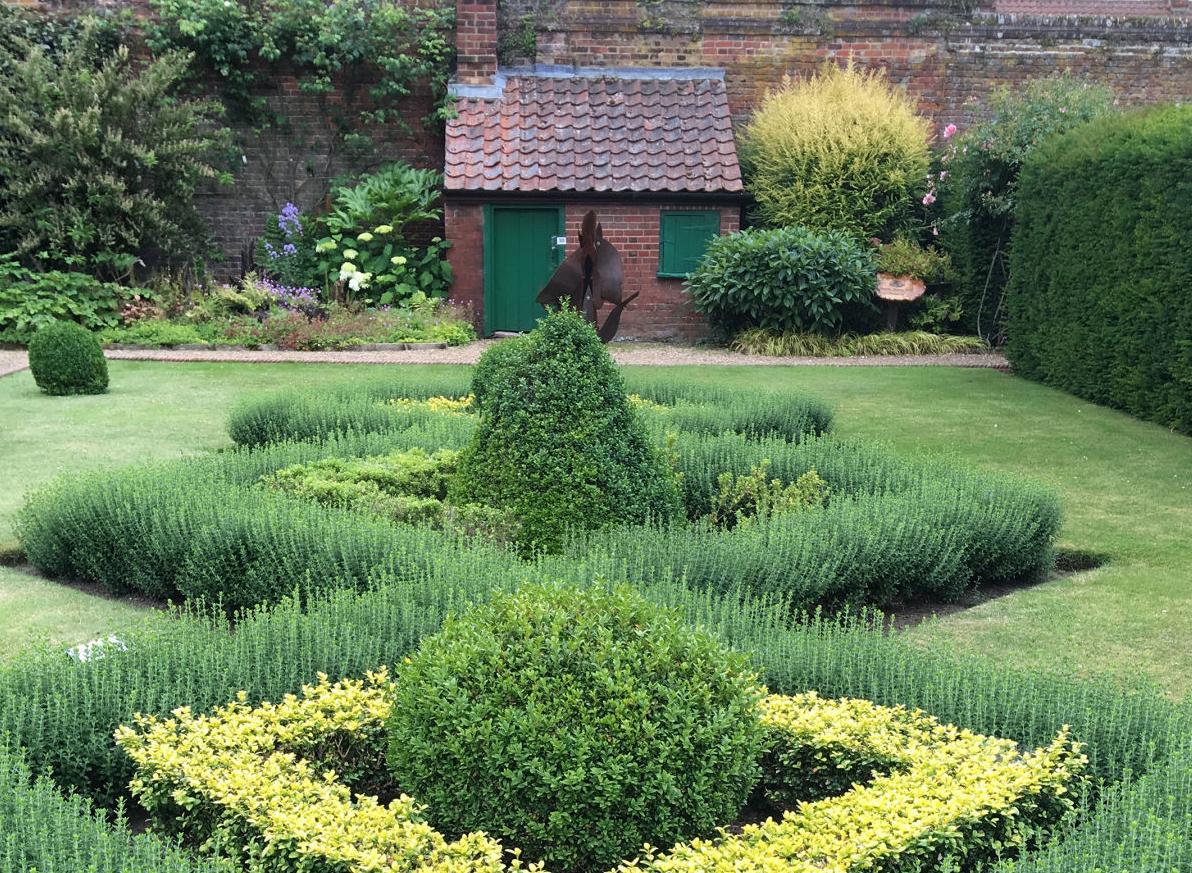 Something people expect of English Gardens is carefully manicured short hedges like these. The Old Vicarage did not disappoint. 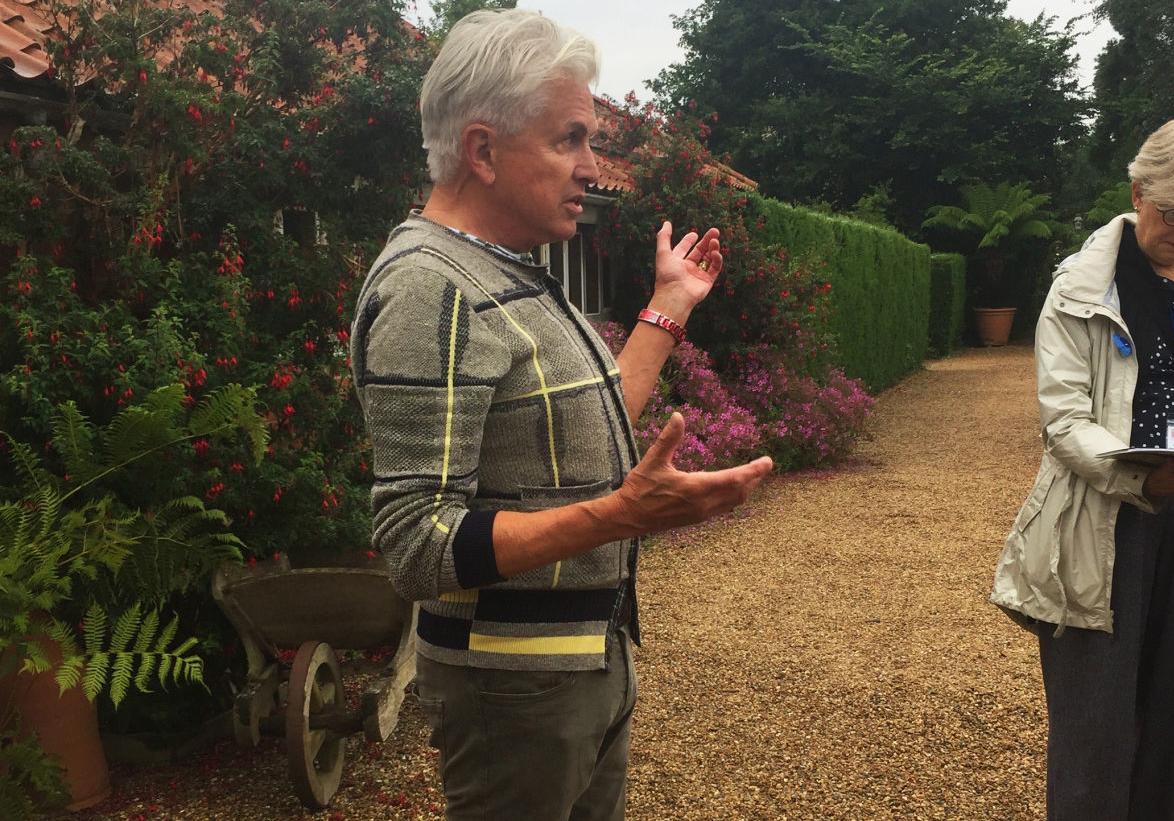 Alan Gray talks to visitors in his sprawling garden. 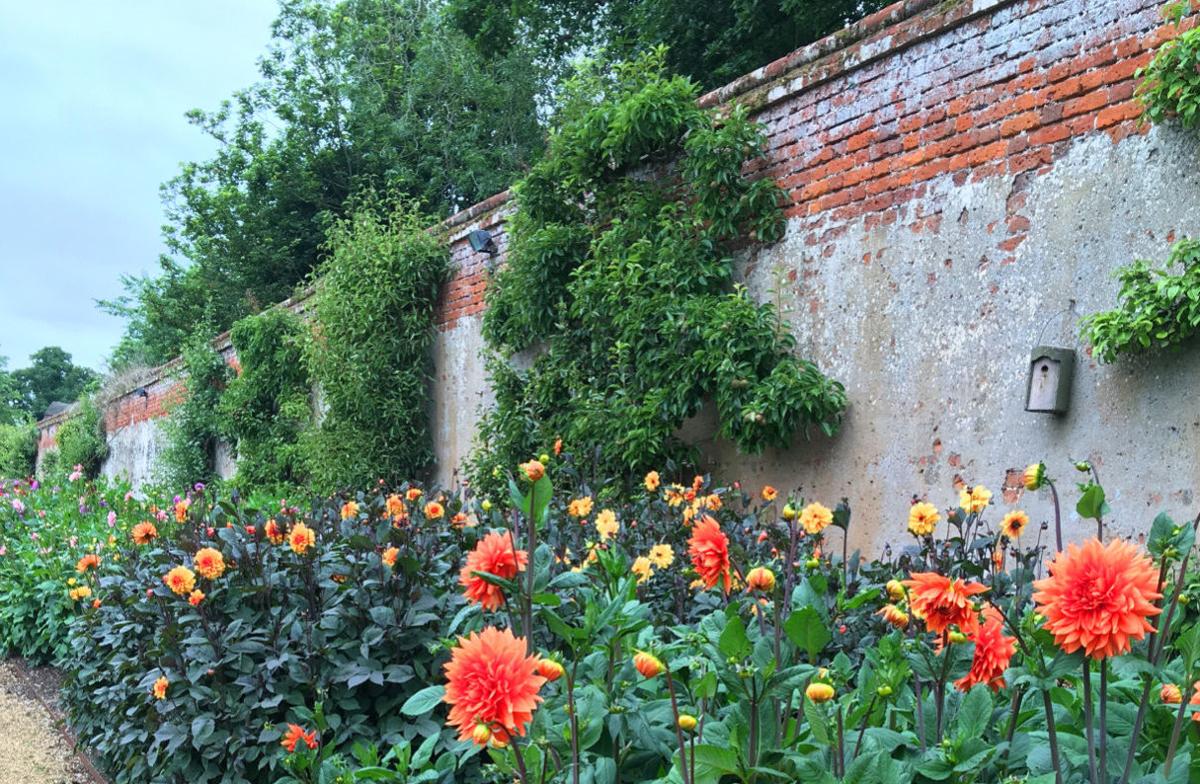 Beds of brilliant Dahlias line a garden wall at the Old Vicarage.

Coton Manor in Northamptonshire, England, was built in 1662 and has 10 acres of gardens.

One of many sumptuous borders at Coton Manor.

You wouldn't think you'd see flamingos in England, but there they were, parading in an open area of the garden.

Much to Carol's surprise, there was Coton Manor's owner, Susie Pasley-Tyler, working away in her massive garden. She's out there every day for hours on end.

The Old Vicarage at East Ruston is said to be "a garden that should be on everybody's bucket list" and has some of the most gorgeous container plantings Carol has ever seen.

Something people expect of English Gardens is carefully manicured short hedges like these. The Old Vicarage did not disappoint.

Alan Gray talks to visitors in his sprawling garden.

Beds of brilliant Dahlias line a garden wall at the Old Vicarage.

I hitched a ride with my sister-in-law Kit and 25 of her friends from the Hardy Plant Society of Oregon on a tour of English gardens in July. I know, the term “society” is imposing and can be off-putting at first. It is true that most HPSO members can rattle off, with perfect pronunciation, the Latin name of any plant and correctly identify the particular cultivar, which is even trickier. But I can’t imagine a more fun and welcoming group of hearty, intrepid gardeners.

For 13 days, we traipsed over miles and miles of paths through 27 gardens in the small towns and villages of East Anglia and the Thames River Valley.

Our leader was Bruce Wakefield, a past HPSO president, current office director, and ardent gardener, plantsman and traveler. I’ve visited Bruce and his husband Jerry’s Portland garden, and it’s one of the most spectacular in the Northwest. This tour was the 24th that Bruce had expertly planned and organized (and he has 62,000 photos to prove it).

Also joining us was a Blue Badge Guide. Applicants study for up to two years at university level and must pass a series of exams to become Blue Badge Tourist Guides in Britain. Anne was ours, and while she didn’t know much about horticulture, that’s not why she was along. Her extensive knowledge of British history and culture added another dimension to the tour.

At best, we Americans had vaguely remembered bits and pieces from history class and the nightly news. When we needed someone to explain England’s monarchy and Parliament, Brexit, Ed Sheeran, or what exactly was in the Black Pudding we ate at lunch, “just ask Anne.”

The East of England is one of nine official districts in Britain. In ancient times, this area was the country’s most populous. Today, it’s mostly a rural landscape of market towns, churches and picturesque villages. There is peace and tranquility in these historic, culturally rich counties, and there is no better way to discover it than in inspiring, iconic gardens.

England is the most garden-loving country in the world, with more gardens open to the public than anywhere else. Each one we visited was remarkable, but let me tell you about two of my favorites.

There are 10 acres to explore at Coton Manor in Northamptonshire. The original manor house, destroyed by Oliver Cromwell in the 1640s, was rebuilt in 1662 and is now Ian and Susie Pasley-Tyler’s storybook home. The framework of the garden was first laid out by Ian’s grandparents in the 1920s,and continued to be maintained by his parents. Ian inherited Coton Manor in 1990.

With six weeks notice, he and his wife moved from London and took over, arriving with no gardening experience. The head gardener promptly quit.

Since then, the Pasley-Tylers have created an evocative and quintessentially English garden, renowned for its sumptuous borders. Continually evolving and providing color and interest in every season, the garden welcomed 25,000 visitors last year.

We visited on the third day of our trip, and the cottage gardens and herbaceous borders were at their peak. I rounded a corner and found a woman kneeling in one of the long, lush beds, her head buried in the flowers she was deadheading. I watched her work for several minutes. There was something about the familiarity she had with the plants that prompted me to ask if this was her garden.

Susie walked right over, introduced herself, and told us her story. After all, gardens are all about the people who make them. She describes herself as a “failed artist” who “couldn’t draw.” Her gift was an eye for color and design, and she’s used it brilliantly. Success with the plants themselves came to her like it does to the rest of us, slowly and over time. Alongside a professional staff, Susie gardens every day, for hours on end. She considers it “her indulgence,” and though she opens it to the public, this is still a much loved private garden.

Coton Manor was voted the “Nation’s Favorite Garden” this year by visitors in conjunction with “English Garden” magazine, and the National Garden Scheme. If you visit, you won’t want to leave.

While every day was special, Bruce announced that day six of our tour would be extraordinary. We were bound for the garden at the Old Vicarage of East Ruston in Norfolk, one he called “a garden that should be on every gardener’s bucket list.”

In 1973, Alan Gray and Graham Robeson purchased two open acres of exposed prairie 1½ miles from the North Sea. What started as a blank canvas has become a garden that spills over 32 acres.

When they arrived, the new owners were shown an old slide of the property. It revealed that before the land had been turned over to agriculture; ponds, hedges, ditches and banks had provided a home for native wildlife and plants.

They decided to replant some of this lost habitat, using a map of the site in the 1880s as their guide. Eventually, this renovated area became the foundation for one new garden after another. Kingfishers, partridge, woodcock and barn owls have returned.

They designed it all without professional help. One of the theme gardens, The Desert Wash, is Graham’s creation, and made to resemble a landscape in Arizona. Flint rocks, 450 tons of them, were brought in from the coast to construct a dry riverbed. Flint rocks are fragile, and had to be unloaded one at a time.

I never expected it to happen again, but as I rounded the corner in another amazing garden, there was Alan Gray. Up to his elbows in composted manure, he was transplanting annuals into huge urns. Alan has been giving tours for decades, yet anyone could see that he has never tired of seeing how much visitors enjoy his garden.

We were ooohing and aaahing over some of the most ravishing container plantings we had ever seen. Alan assured us that, “it’s all about the soil,” and gave us the formula for three distinct layers of potting soil he uses in each pot. If visitors see a rare plant in the garden they would like to have, it’s OK to “just ask.” Alan or his staff may have propagated it, and you could buy a start. Chefs guard their secret recipes, but gardeners give them away.

Lasting memories and precious friendships are bound to bloom on a tour like this. I saw some of the best gardens in the world, and shared them with some of the best gardeners. They’re the kind where you could say, “My garden gate is always open. Stop by anytime you’re in Yakima. If I’m not home, just go into the garden and have a look. Dig up whatever you like, and take it home with you.”

If there was one thing I learned in England, it’s that gardens are meant to be open — and shared.