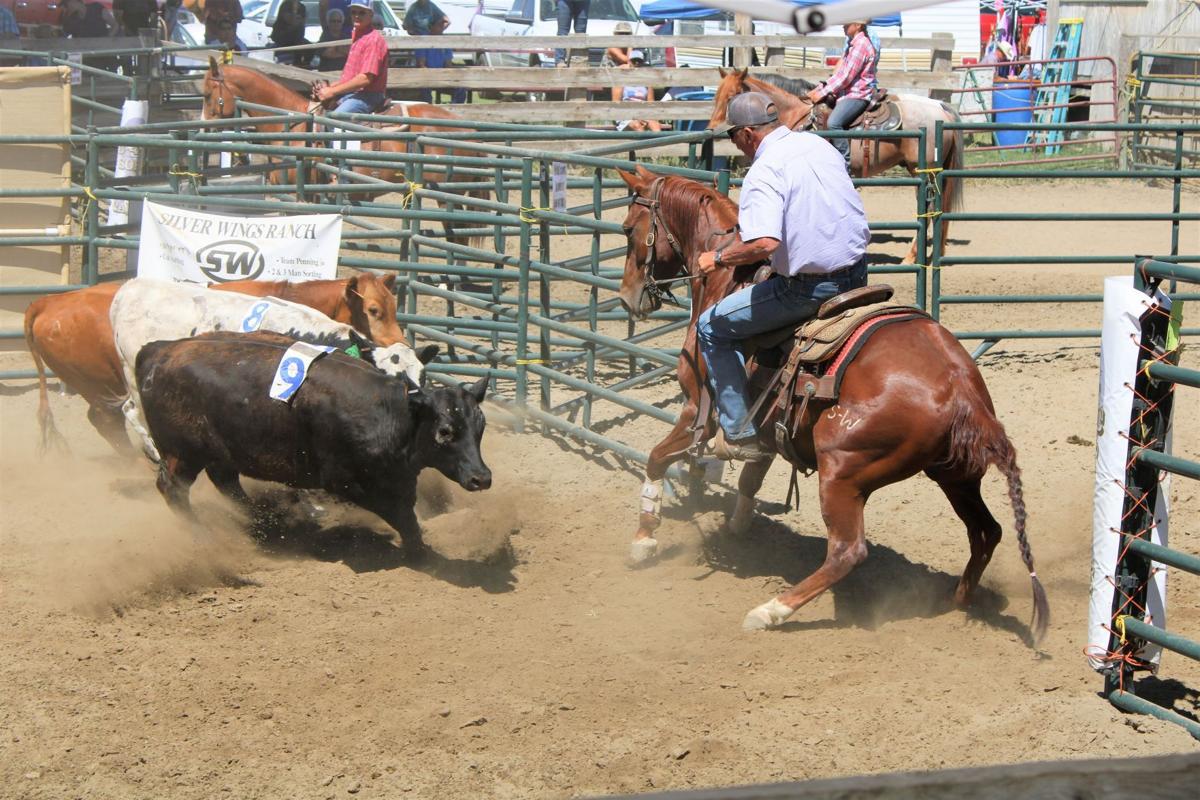 The Sort 4 the Cause event is for charitable purposes, but the competition at Speck Arena is intense. 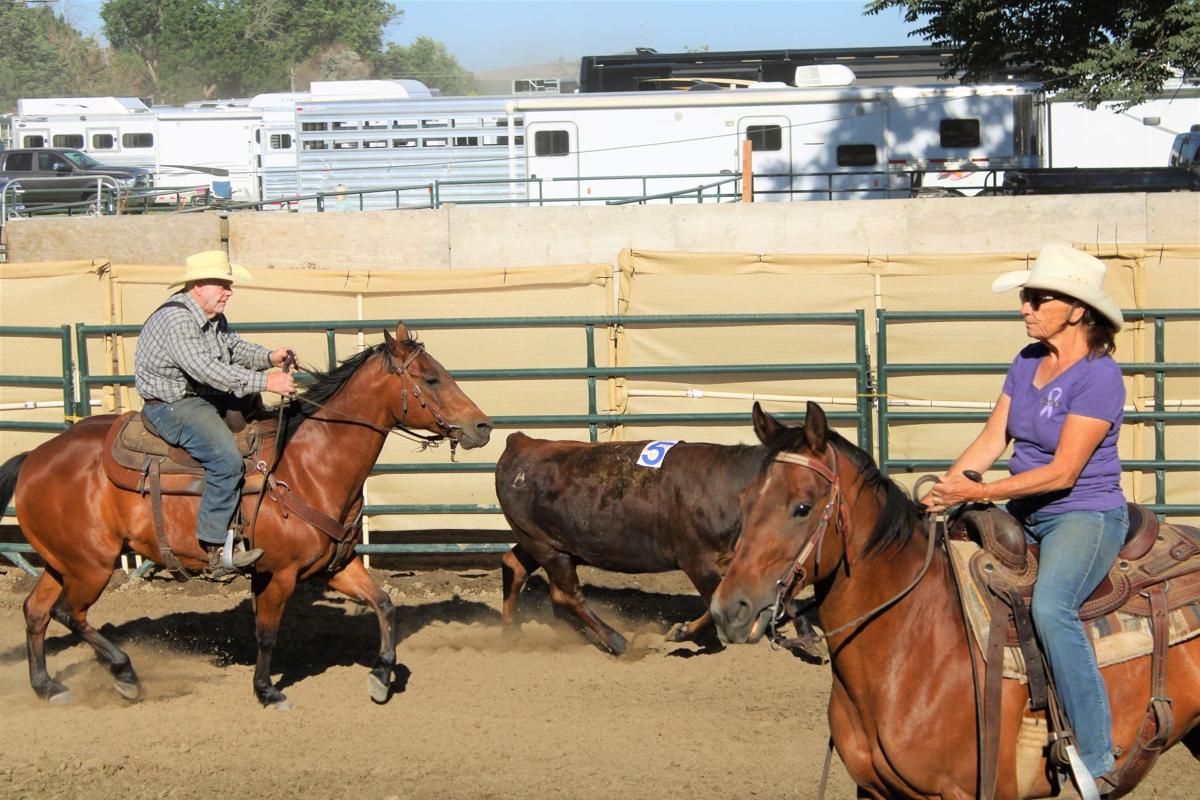 Ranch sorting is a popular western-style sport in which riders on horseback team up to separate cattle. The event is timed and the calves, numbered 1 through 10, are sorted one at a time and penned in numerical order. The team with the most cows penned in the fastest time wins. 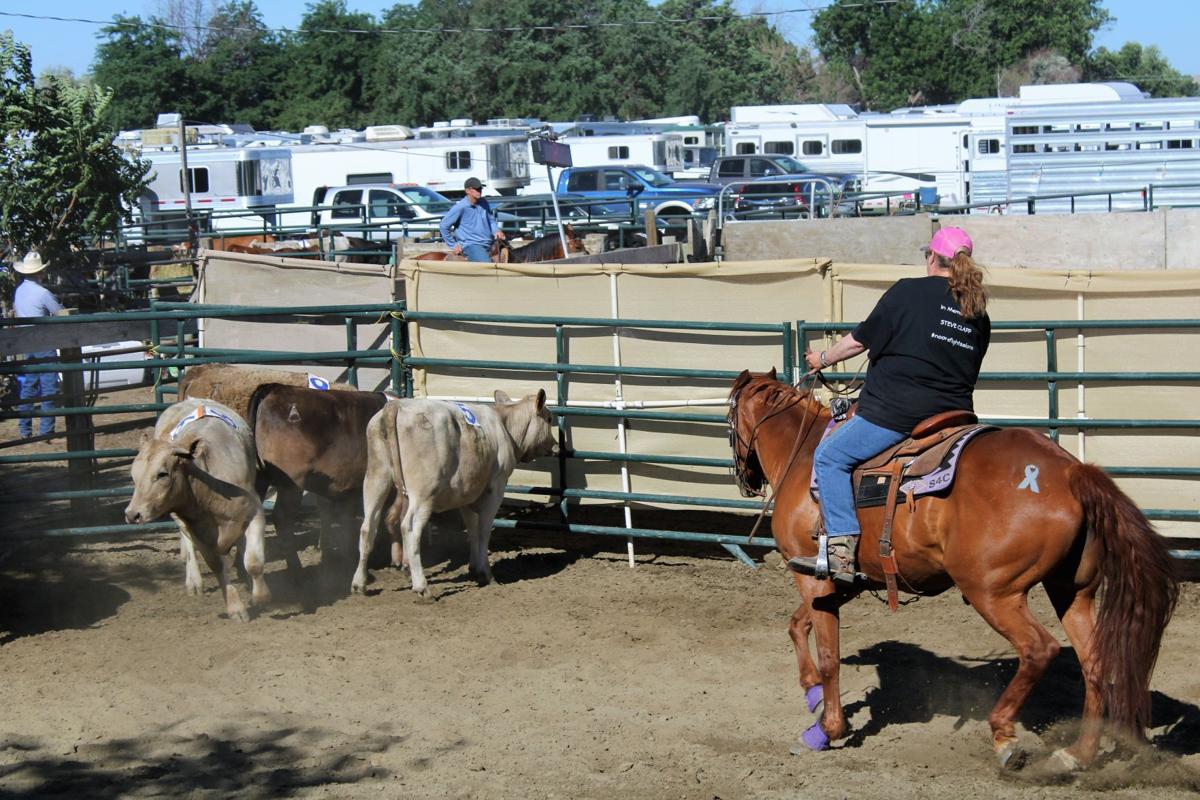 The S4C event has grown so popular that organizers fear it might outgrow Speck Arena someday. 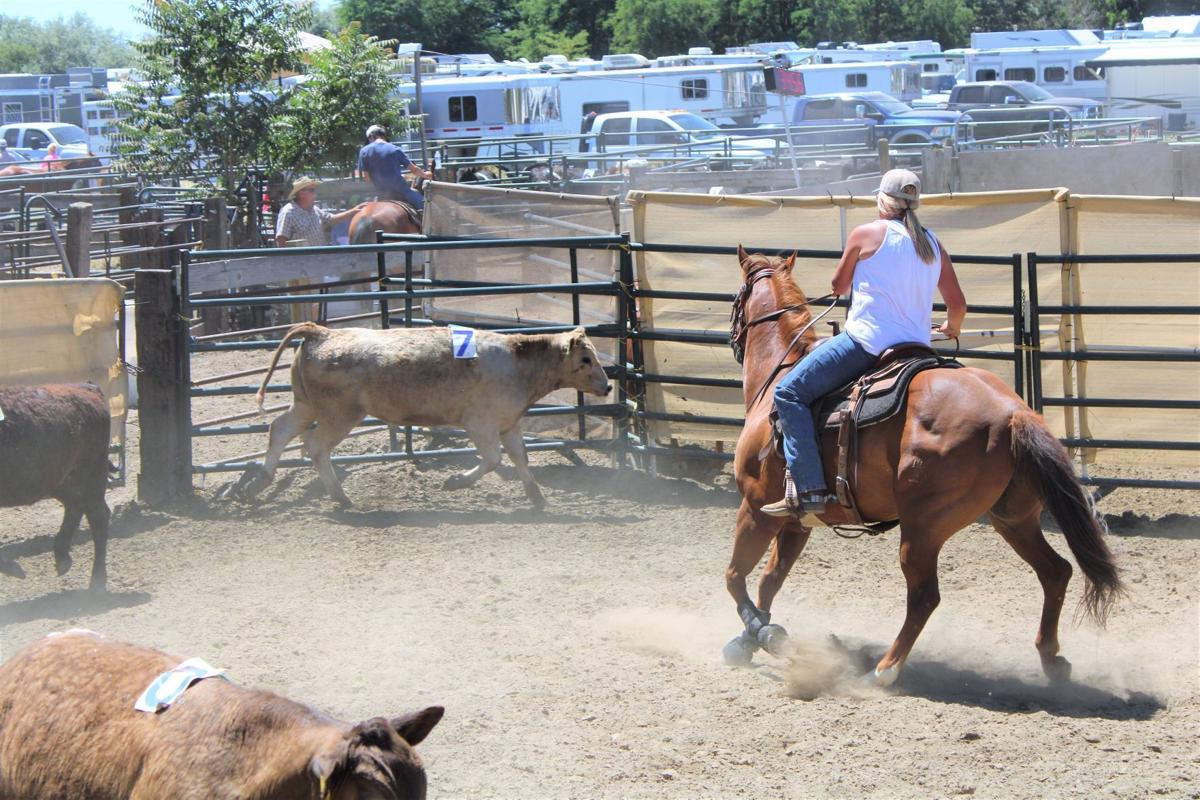 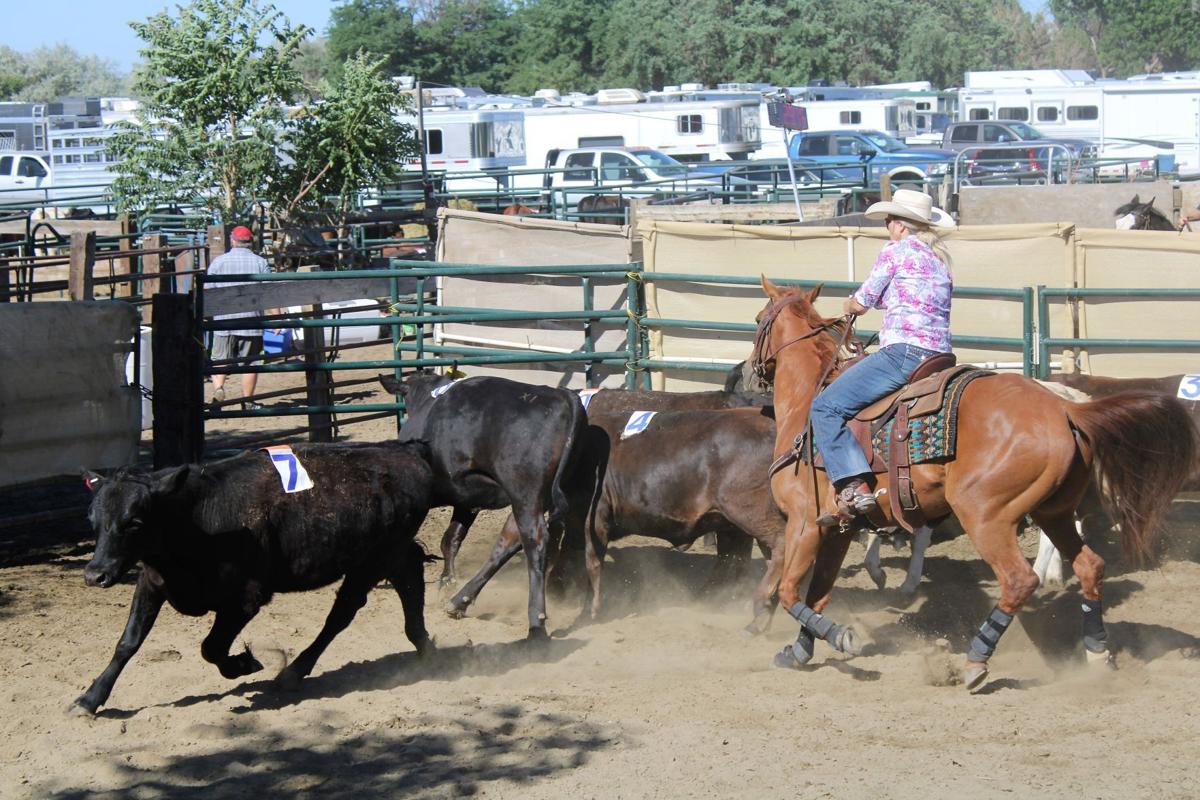 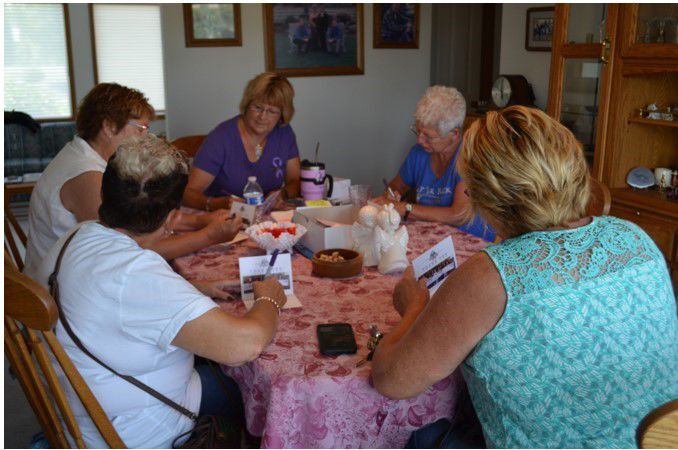 The Sort 4 the Cause event is for charitable purposes, but the competition at Speck Arena is intense.

Ranch sorting is a popular western-style sport in which riders on horseback team up to separate cattle. The event is timed and the calves, numbered 1 through 10, are sorted one at a time and penned in numerical order. The team with the most cows penned in the fastest time wins.

The S4C event has grown so popular that organizers fear it might outgrow Speck Arena someday.

They are sisters, they are friends, some are survivors. And they sort for a good cause.

The board of directors of Sort 4 the Cause are a small group of local women who have made a lifestyle of running the 501©3 nonprofit charity. Or perhaps the operation of the charity fits well into their chosen lifestyle? Either way, for more than a decade, S4C has raised money for local businesses that serve patients affected by cancer or other life-impacting illness, and their families. The annual donations they give out are the results of nearly a year’s worth of work. And, really, a product of their decades of friendship.

Sisters Pam Bright and Connie Hauver grew up on a Moxee-area ranch and were part of a mounted drill team when they met Pat Champoux about 20 years ago. About the same time, a mutual friend attended an event in Canada that was a fundraiser for helping folks fighting cancer.

The women were looking for a way to give back to their community and considered starting a similar event. After knocking around the idea for a couple of years, they joined forces with Shellie Speck, whose family owns an arena in Sunnyside. More friends were rounded up and the first annual S4C kicked off in 2011.

In recent years it has nearly outgrown Specks Arena.

“We have just under three acres for parking,” Speck said. “We had to start using our neighbor’s property for more parking. I hope we can keep having it here,” she added. “It means a lot to us.”

Speck was especially driven to help with S4C because she lost her dad to cancer. She pointed out that it is a disease that touches many families. She also said that she believes that, besides being just plain fun, S4C draws so much support because a large percentage of proceeds go toward caring for children.

Even though COVID put a halt to the actual sorting event last year, the group still collected funds from generous donors and gave each of their chosen charities $5,000. This past June everyone was back in the saddle for three days of fun that proved to be the biggest and best event yet. The 2021 S4C “fun’d raiser” bagged a whopping $102,000, bringing them to an 11-year fundraising total of $540,000.

The event’s board of directors is rounded out by Sue Branch and Diann Monroe. The group of cowgirls gathered in mid-July to finish one of the last official duties for this year’s S4C — writing thank yous to sponsors and volunteers and preparing gift packages for the mail.

The packages contained either a weather station or a clock/charging station, both inscribed with the event logo. All in all, the cowgirls used their lavender pens (lavender ribbons are a sign of support for those living with all types of cancer) to write to 80 people or businesses that were major sponsors, donors, or helpers and 130 who donated to the auctions.

S4C has a Facebook page where interested folks can get more information, including how to support the charity through shopping on AmazonSmile. It is one of the many ways of giving to the group and after about a month off, Hauver, Champoux, Branch, Bright, Monroe and Speck will be back out on the trail, touching base with the ongoing sponsors, tracking down new ones, and all the other details that go into putting on their top-notch sorting competition.

“I liken it to having a baby,” Hauver said. “You go through it and say ‘I am never going through that again because it is so much work. Then it is time to give the checks away and tears start flowing and kids are so grateful, and you know you are going to do it again.”

“Horse people are like that,” according to Bright. “They always step up to help out.” These cowgirls will certainly be helping out, meeting every Wednesday to work on next year’s S4C. And they ask that the next time you are in a giving mood, look no further than a local cow pen. There you can find an event of a unique sort, but it is certainly for a worthy cause.