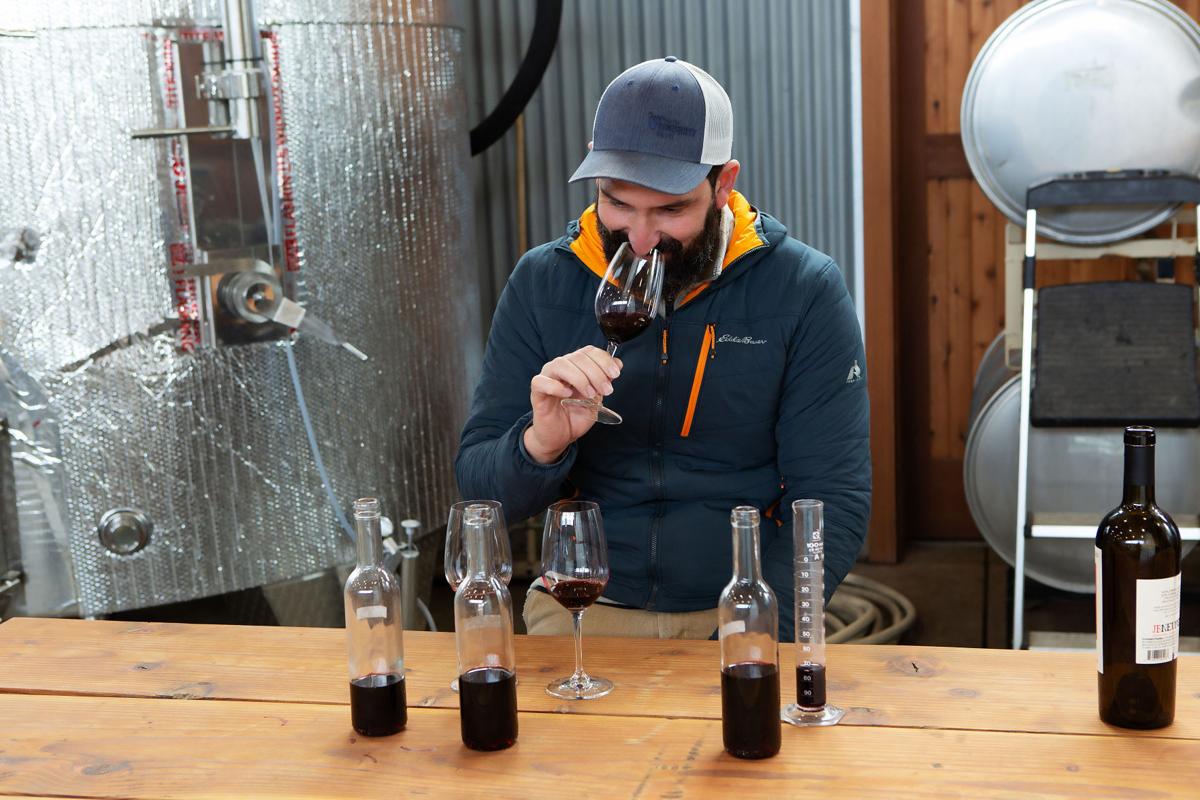 Justin Neufeld has produced more than 100,000 cases of wine for Gilbert Cellars. Now his own wine label is available in 10 states. 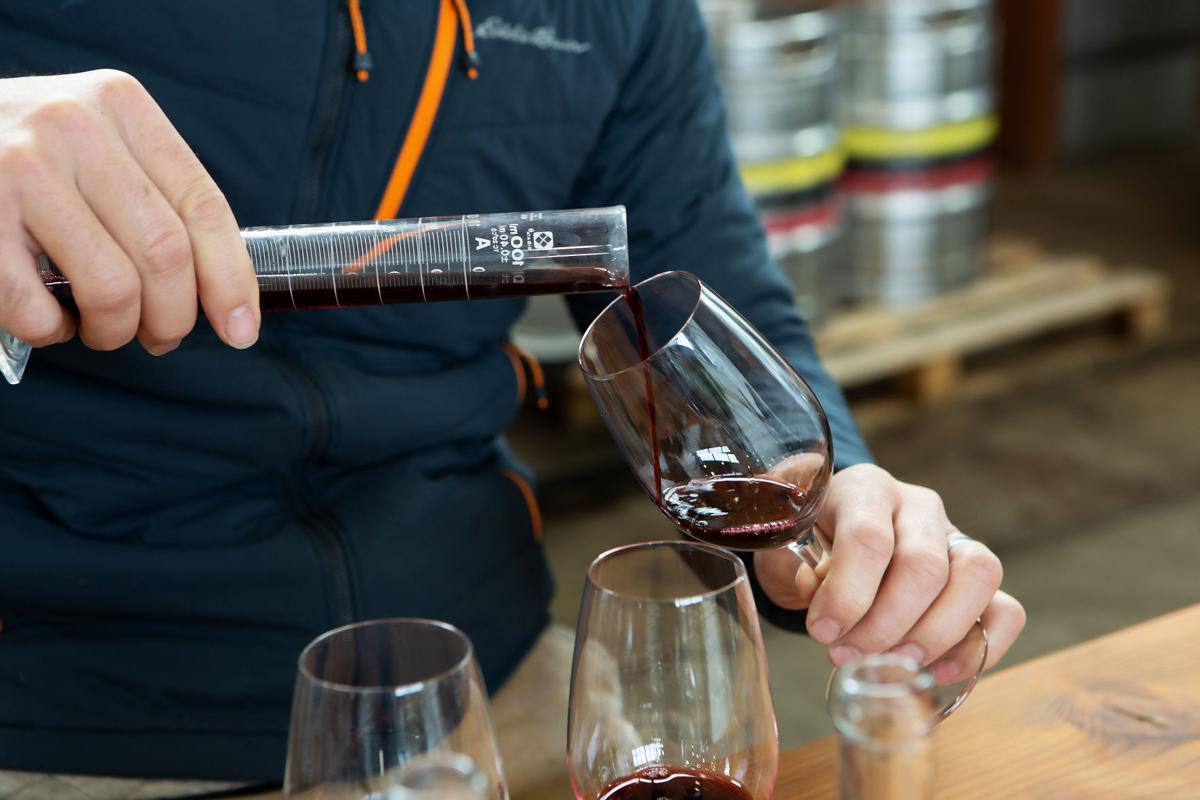 Painstaking attention to detail goes into any wine, and Neufeld never cuts corners. 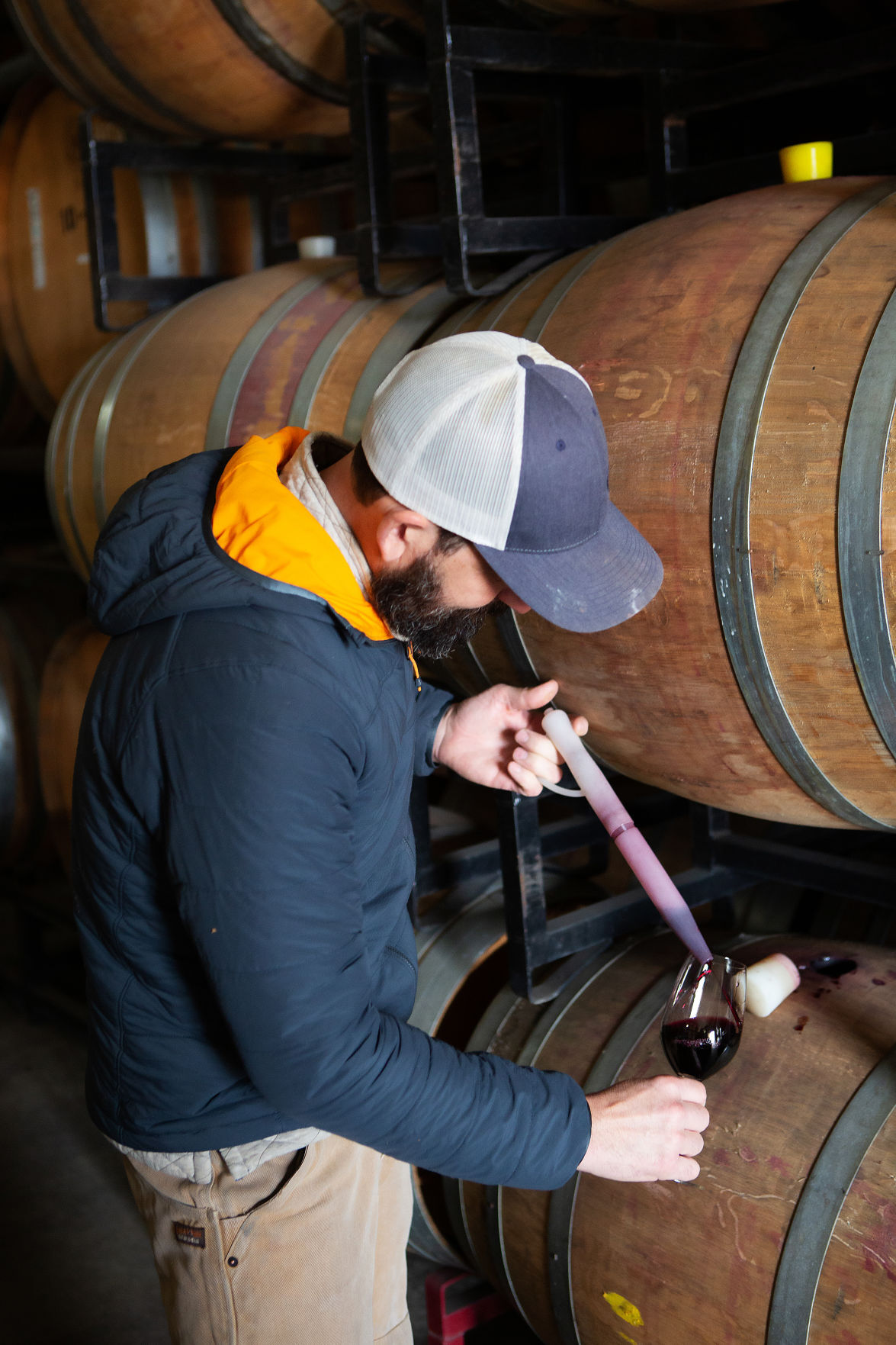 Neufeld's own winery started with his first six barrels back in 2008. 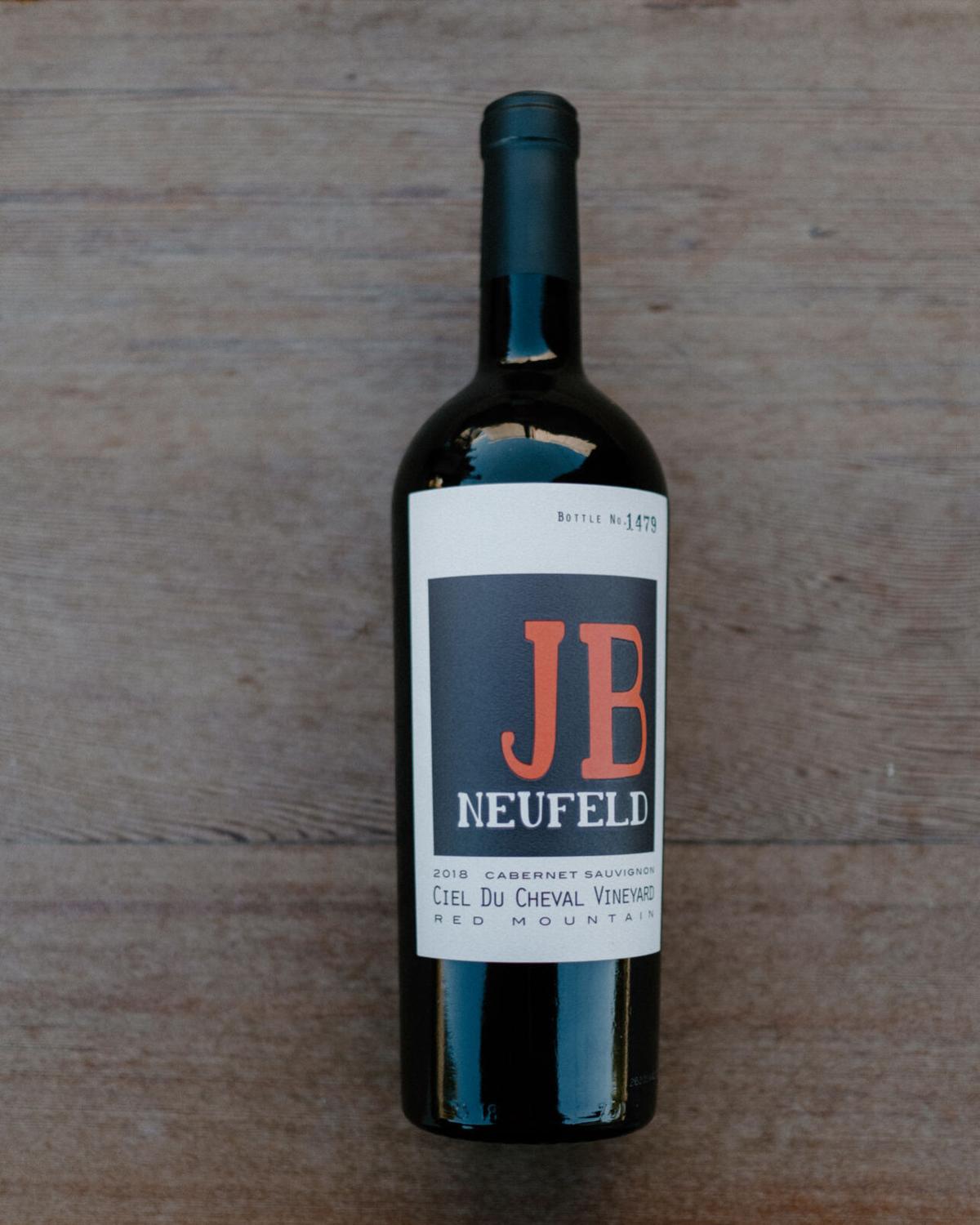 The finished products -- like this Ciel du Cheval -- are worth all the work and waiting. 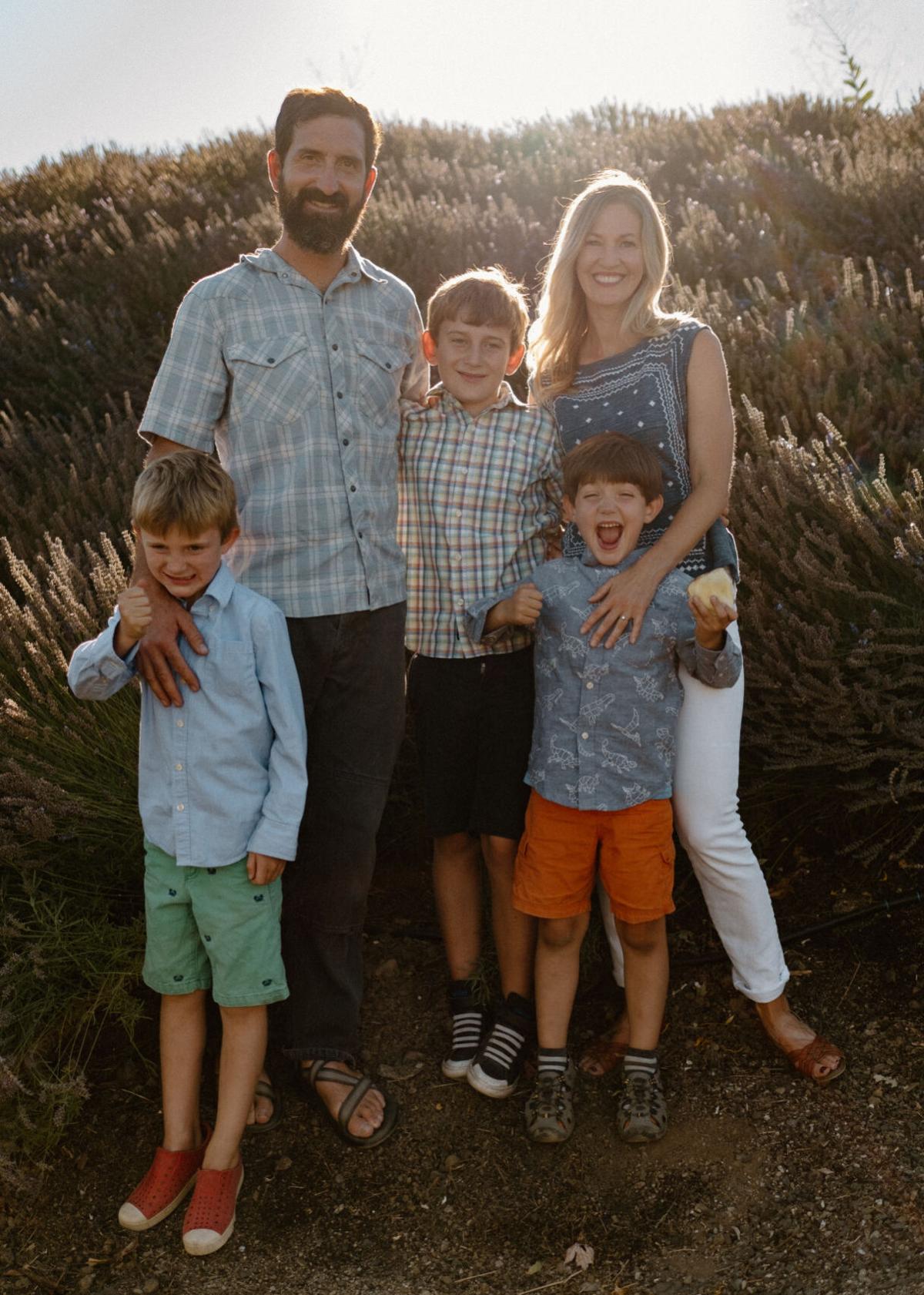 Justin and Brooke Neufeld are building a wine legacy that might someday be passed down to their children. 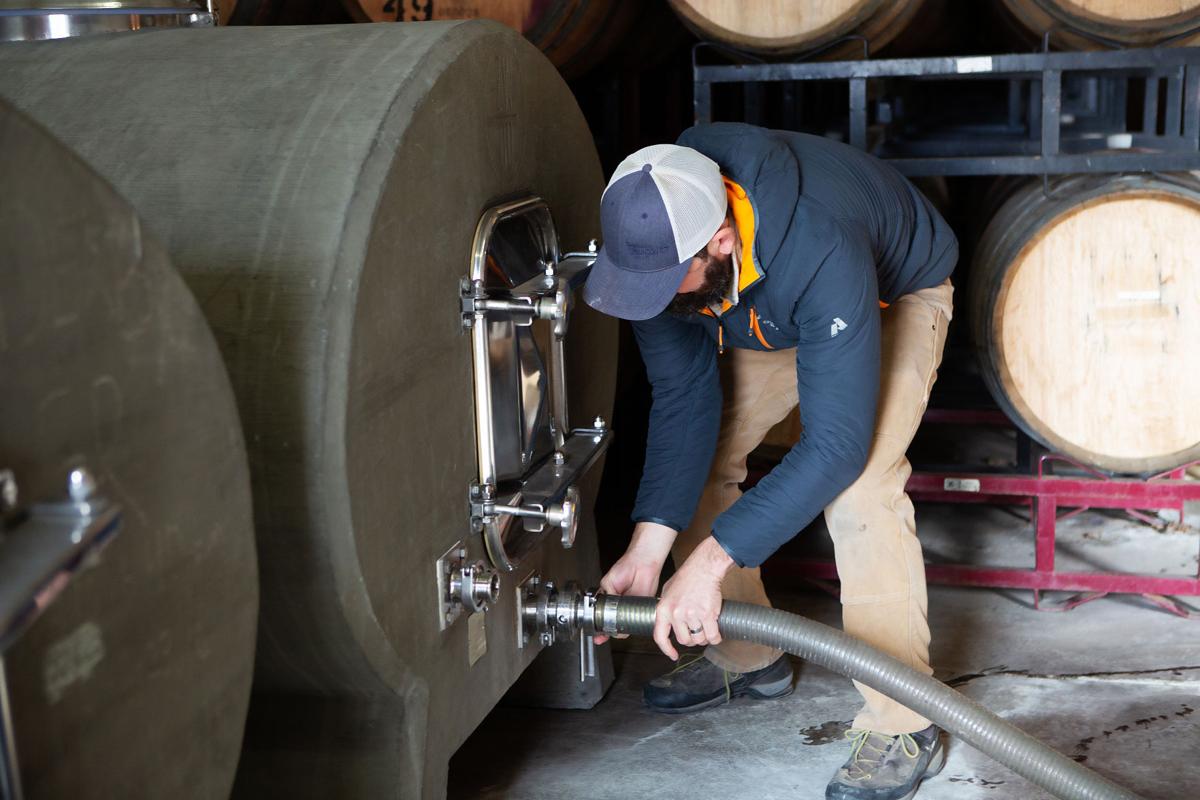 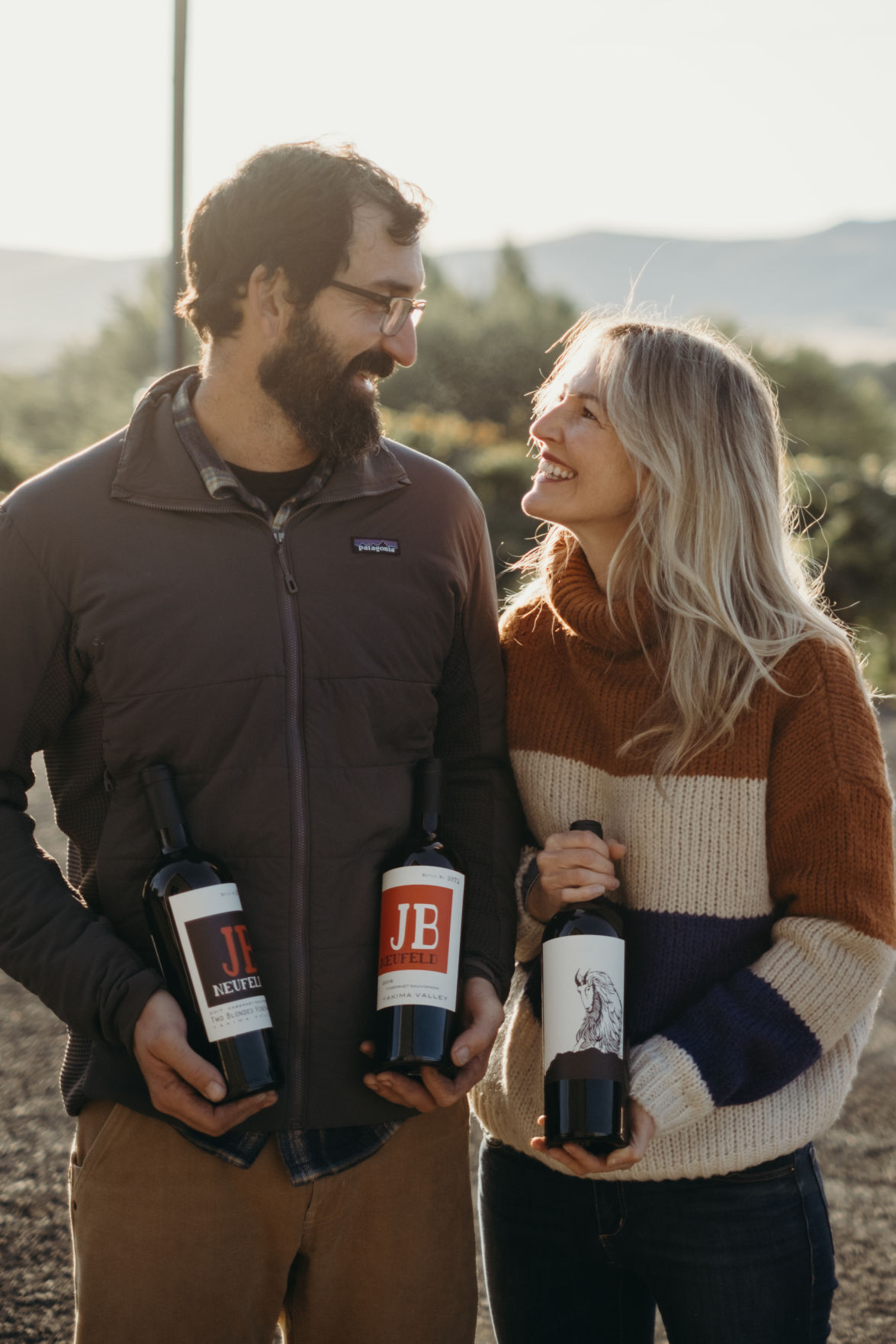 Neufeld's wife, Brooke, focuses on the winery's marketing, works with the distributors, and is in charge of bookkeeping and sales.

Justin Neufeld has produced more than 100,000 cases of wine for Gilbert Cellars. Now his own wine label is available in 10 states.

Painstaking attention to detail goes into any wine, and Neufeld never cuts corners.

Neufeld's own winery started with his first six barrels back in 2008.

The finished products -- like this Ciel du Cheval -- are worth all the work and waiting.

Justin and Brooke Neufeld are building a wine legacy that might someday be passed down to their children.

Neufeld's wife, Brooke, focuses on the winery's marketing, works with the distributors, and is in charge of bookkeeping and sales.

If you’ve been a fan of Yakima-area wine offerings, you may have heard the name Justin Neufeld.

Neufeld’s been at the helm of Gilbert Cellars’ winemaking operation since 2007. He has produced more than 100,000 cases of their wine, including the ever-popular Unoaked Chardonnay, Left Bank Bordeaux blend and my personal favorite, their Rose.

If you’ve enjoyed any of those wines, you might want to learn more about Neufeld’s own winery — JB Neufeld.

Although the winery’s first vintage was 2008, a year after he started with Gilbert, Neufeld’s plan and passion started years earlier. While working on his degree in microbiology from the University of Washington, a professor of his was friends with some of the folks at Columbia Winery and set up a field trip. Neufeld instantly caught the wine bug.

His roommate was Andrew Sundquist, whose family has been a major part of the valley’s agricultural community for generations. Sundquist’s father helped secure an internship for Neufeld at Chateau Ste. Michelle in 2003. From there, Neufeld secured a lab job at Silver Lake Winery and ran analysis for Gilbert Cellars in 2004 before moving to Walla Walla to become winemaker at Glen Fiona in 2006.

In 2007, Neufeld returned to Yakima and Gilbert Cellars. The position allowed him the opportunity to work with a great up-and-coming winery while developing his own brand.

Asked about wanting to start his own winery, Neufeld said, “Initially, after an Epiphany that I wanted to make wine, I wanted to have a family opportunity. Of course, I loved wine, and knew this would offer complete control.”

He developed a plan during his first year with Gilbert and put his first six barrels of wine to bed the following year, in the cave next to the Gilbert Cellars wines.

Those barrels brought to life 150 cases of some incredible Cabernet Sauvignon. Neufeld wanted to showcase certain vineyards and allow the terroir to tell a big part of the story. He started with Artz on Red Mountain and DuBrul from Sunnyside. Both are famed as some of the best Cabernet grapes in the Columbia Valley AVA (American Viticultural Area).

I loved the first bottles I tasted upon release, and again around their 10th birthday. The latter also made me realize that if Neufeld could make a wine sing like that at his first opportunity, then he would surely make a thing of beauty as he honed his skills.

Not satisfied with what he had accomplished to date, Neufeld developed a new wine titled “Old Goat,” a nickname the winemaker picked up in college. This wine has always been a blend destined to make “my best wine possible,” as he described the process. This wine spends far longer in barrel than most. Up to that point, Neufeld had blended the wine and put it back in barrel for 29 months as opposed to the 19-20 that many red wines see. A recent purchase for the winery is changing that.

Neufeld has added a pair of concrete tanks for fermentation. Instead of the blends finishing in barrel, they will now reside in their new home before bottling. Concrete is different than the traditional oak wine barrel, providing a slight minerality that many wine-lovers seek today. He seemed quite excited about the opportunity.

The 2019 vintage will go into the concrete in June of this year, be bottled in early 2022 and finally released in 2023. That’s a real dedication to your craft and passion for your product. It was likely also the reason that the Old Goat did not start with early vintages because of the cost associated with keeping a wine under wraps for that length of time.

A second label will be arriving in the near future for Neufeld, however, you won’t likely see it on any store shelves. The new wines — labeled “jb” (in lower case to signify the little sibling to the bigger JB Neufeld wines) — will primarily be available in restaurants for glass pours only. With the higher price point of his premium wines, this will give a greater opportunity for his wine to make it into the secondary market and the mouths of oenophiles.

Neufeld’s distributors pushed the idea of the lower price point wines. Currently, you can find the JB Neufeld label available for glass pour in New York, where the market can bear higher prices, and at a few of the locally owned restaurants here in Yakima. Neufeld said he has been both surprised and thankful for the tremendous local support to make his wine available to patrons.

Neufeld wines can be found in 10 states across the country, primarily in the Southeast. His bottles are also shipped to Australia and Singapore. While not slighting the rest of our country, Neufeld said he would most appreciate visiting those locales to taste with them.

Of course, like many small businesses, JB Neufeld is not an endeavor of a single person, but of a family. Justin’s wife Brooke is an integral part of their day-to-day operations as well as their success. She focuses on all marketing aspects, works with the distributors and is in charge of bookkeeping and sales. That’s a tall order for one person.

The pair have grown their winery from the meager beginnings of 150 cases to a planned 1,200 for the 2020 vintage. Those figures don’t include an additional 900 cases for the secondary jb label.

They have three children: Max, who will be 11 this summer, Miles, 8, and Jude, 6. The oldest is likely to spend some time helping this summer for the first time. I don’t see the parent forcing the issue, but I’m sure both would love to one day turn over the reins of what they will have built to the next generation.

One thing I appreciate most about Neufeld is his passion for our region. “I have a strong connection and commitment to the valley. This is not just a great place to grow grapes, but a great place to make the wine as well.”

I’m thankful he believes that and look forward to tasting his wine for years to come.

Find JB Neufeld for tasting out at the Gilbert Cellars Winery, for purchase on various local wine shelves and by the glass at Yakima’s top restaurants. Enjoy it however you can.