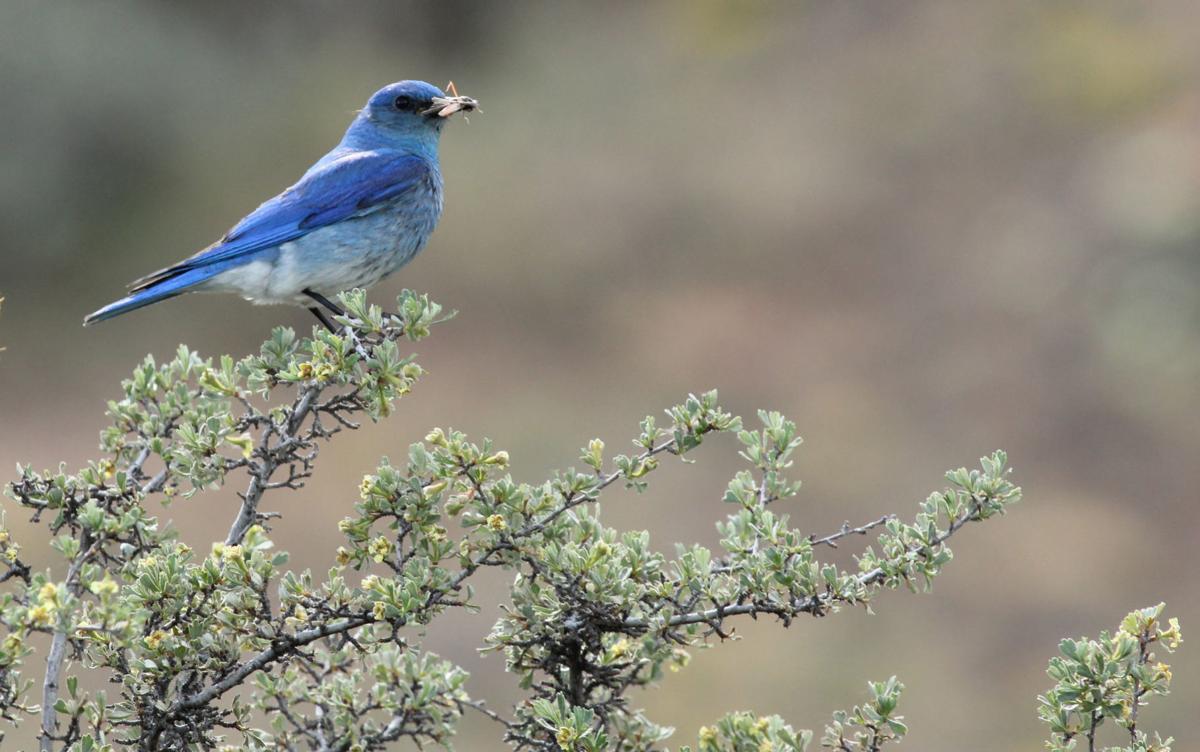 This bluebird caught a nice fat bug to eat, but insect populations are declining. Scientists blame disappearing habitat and insecticides, along with climate change and light pollution. 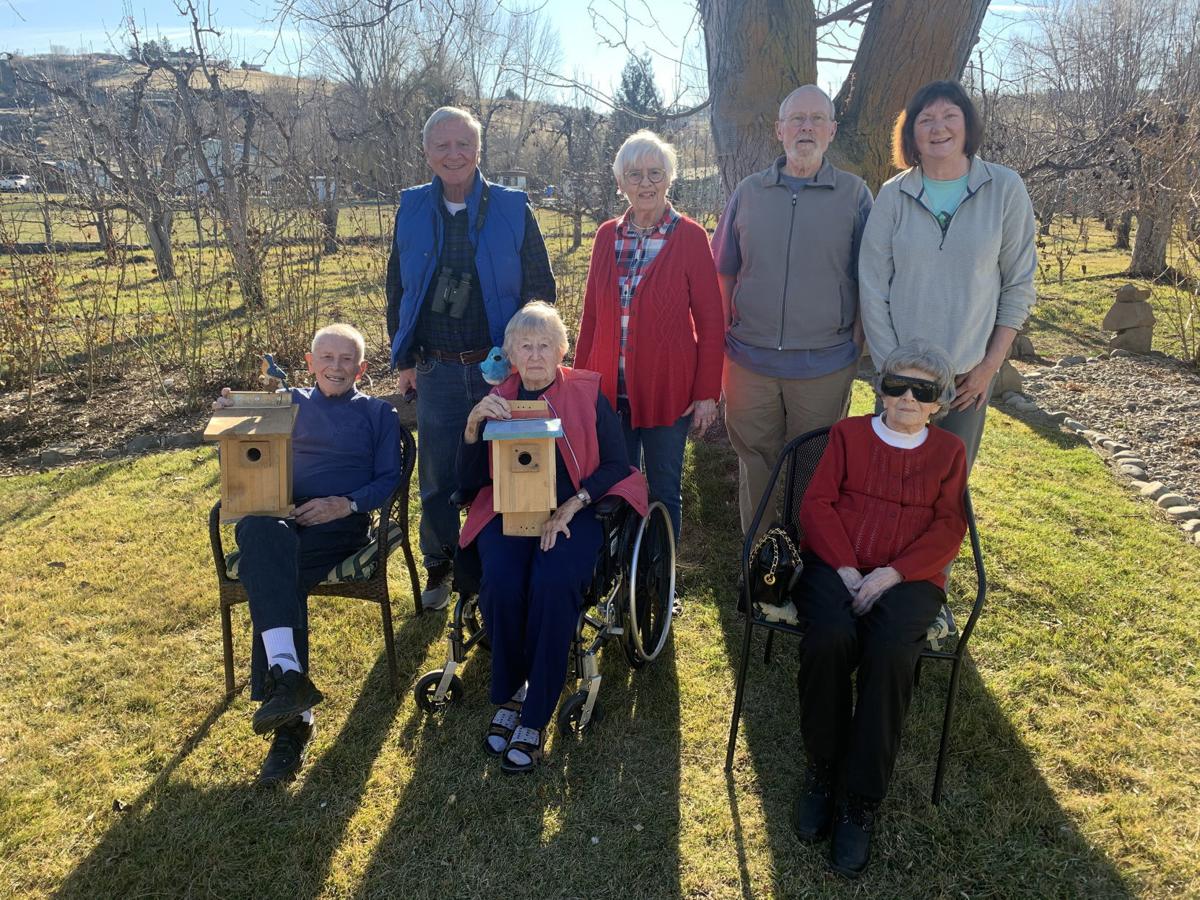 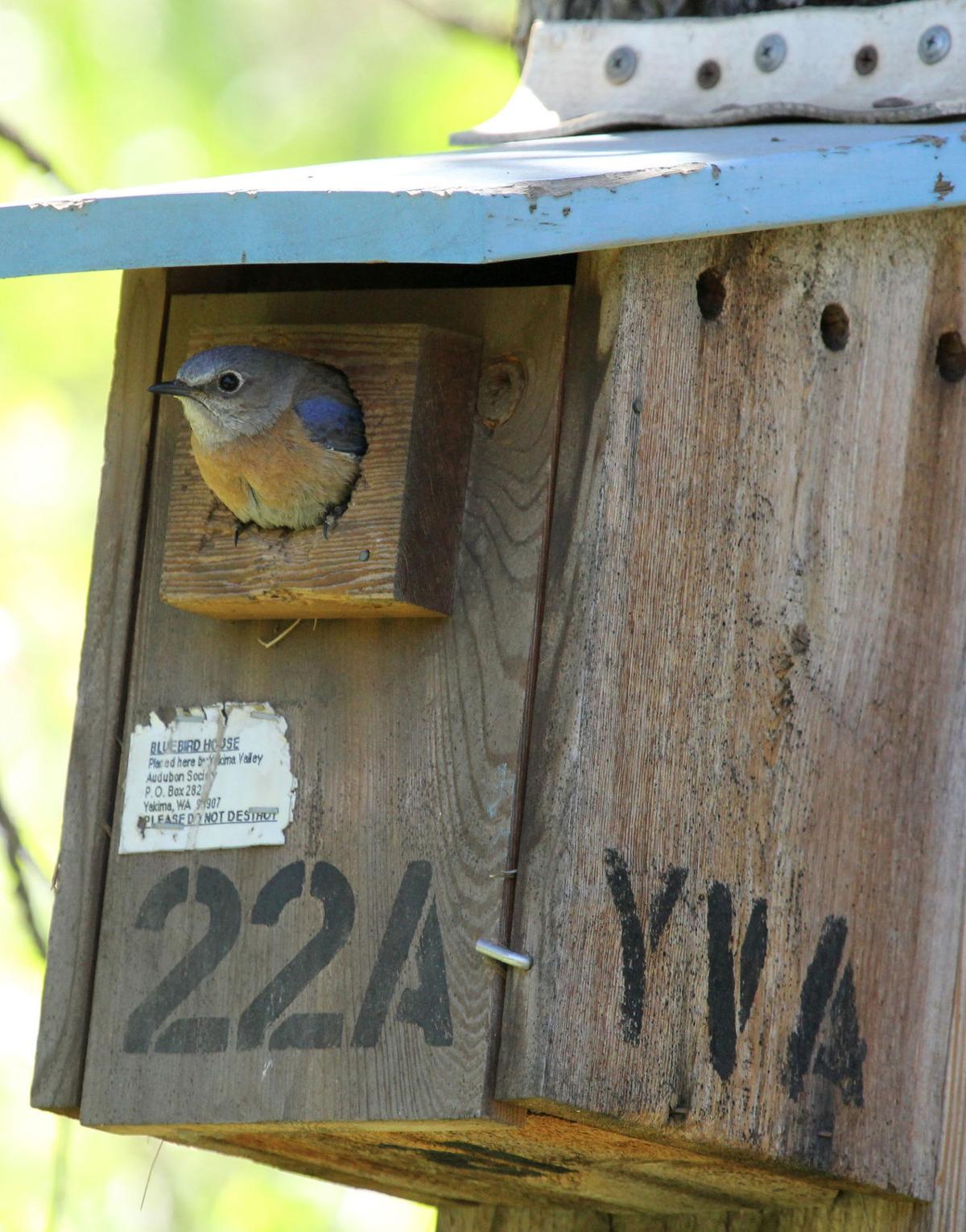 Holes in the nesting boxes are drilled big enough for bluebirds but too small for the larger invasive species.

A bluebird nesting box in the Wenas/Cleman Mountain area. 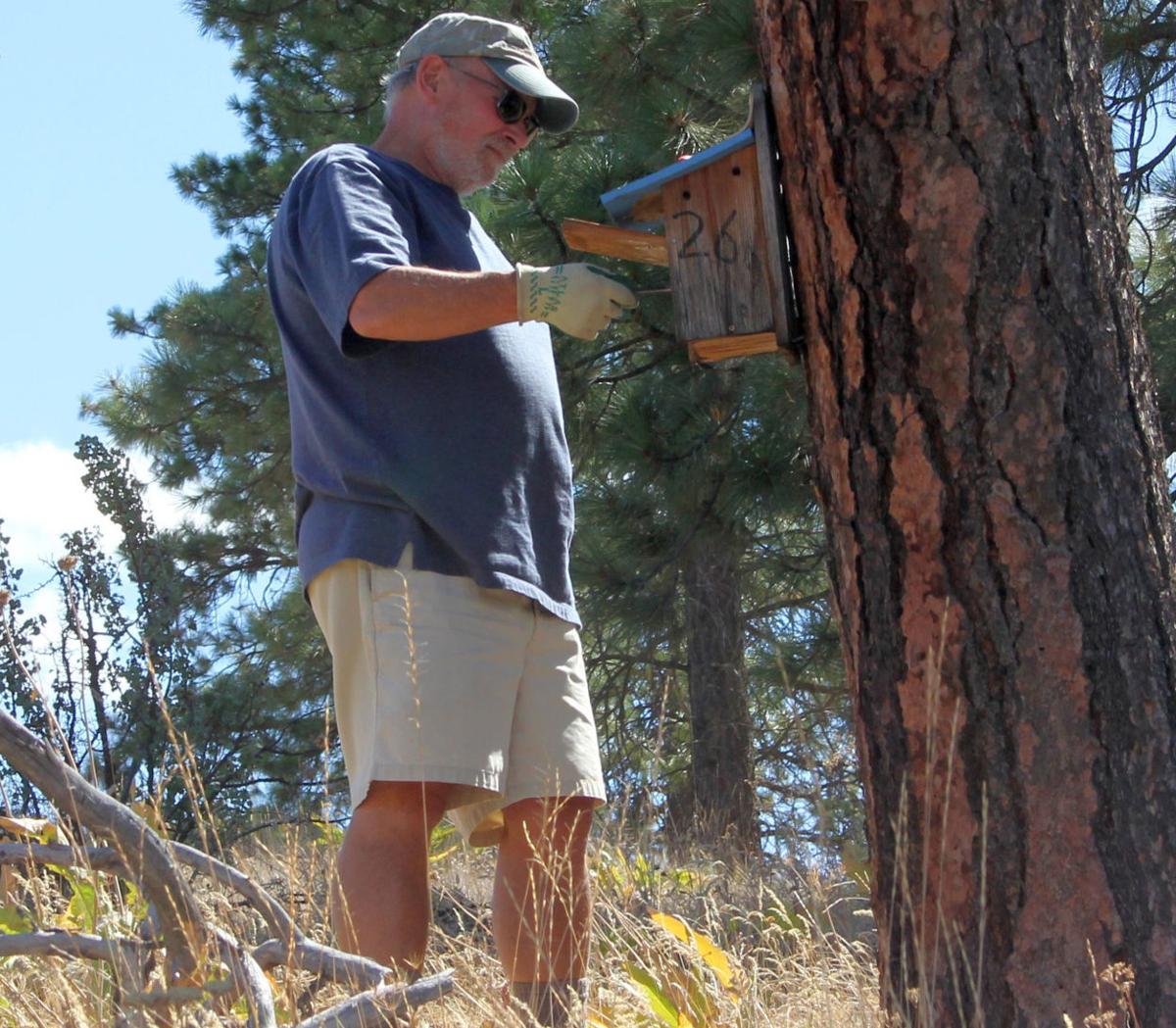 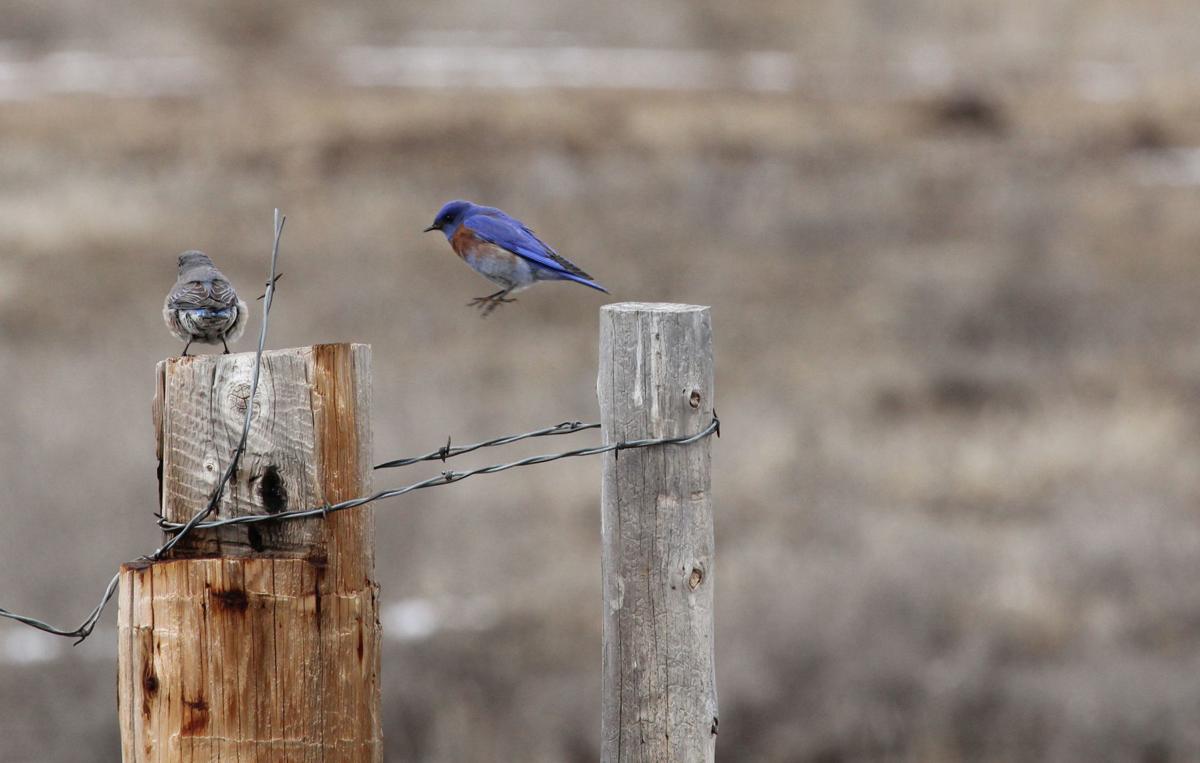 A male Western Bluebird takes a daring leap. This species can be identified by the rusty feathers on its neck and breast area. 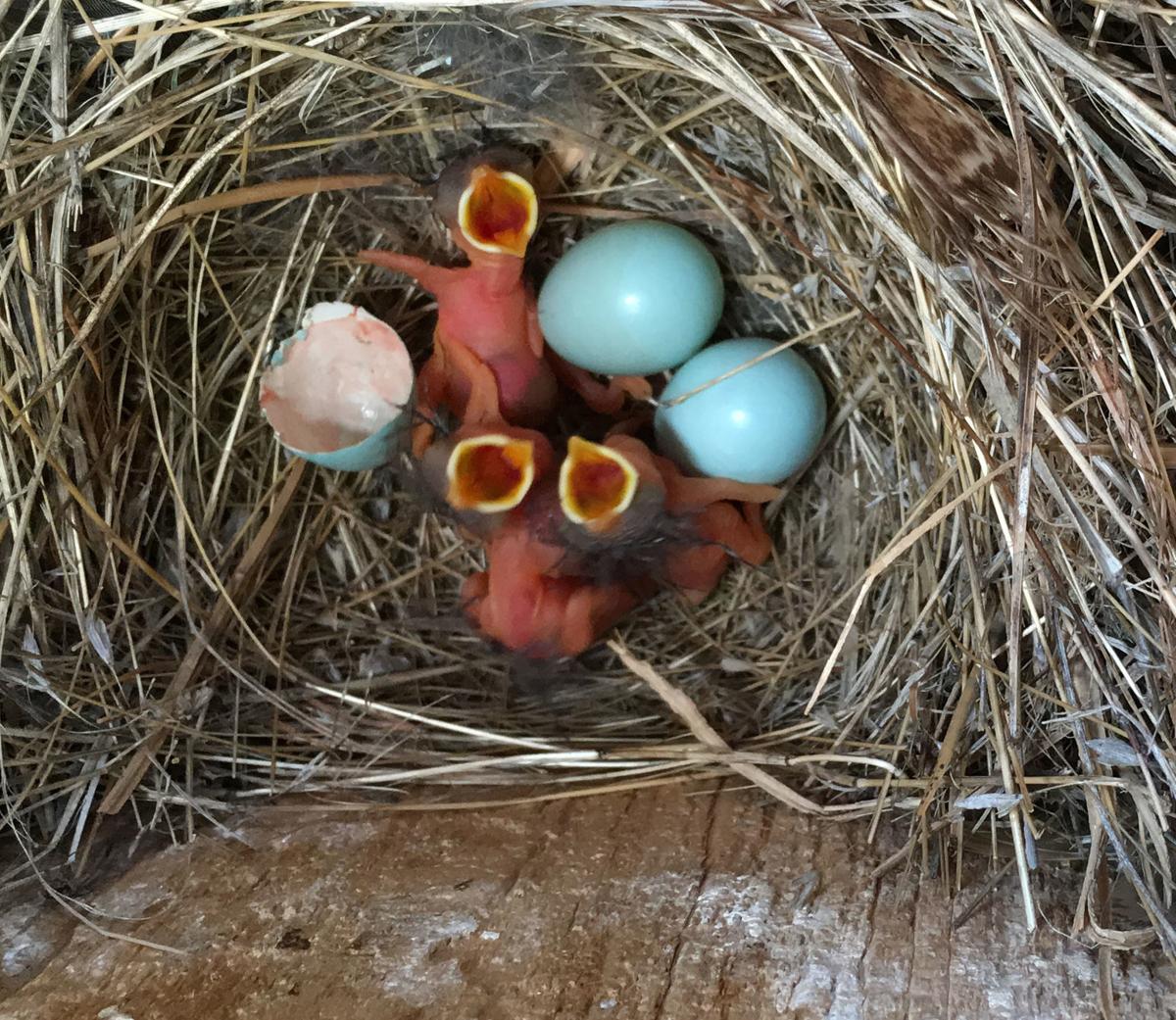 Nest box caretakers record the condition of the box and the presence of eggs or chicks. If they're lucky, sometimes they'll get a glimpse of them hatching. 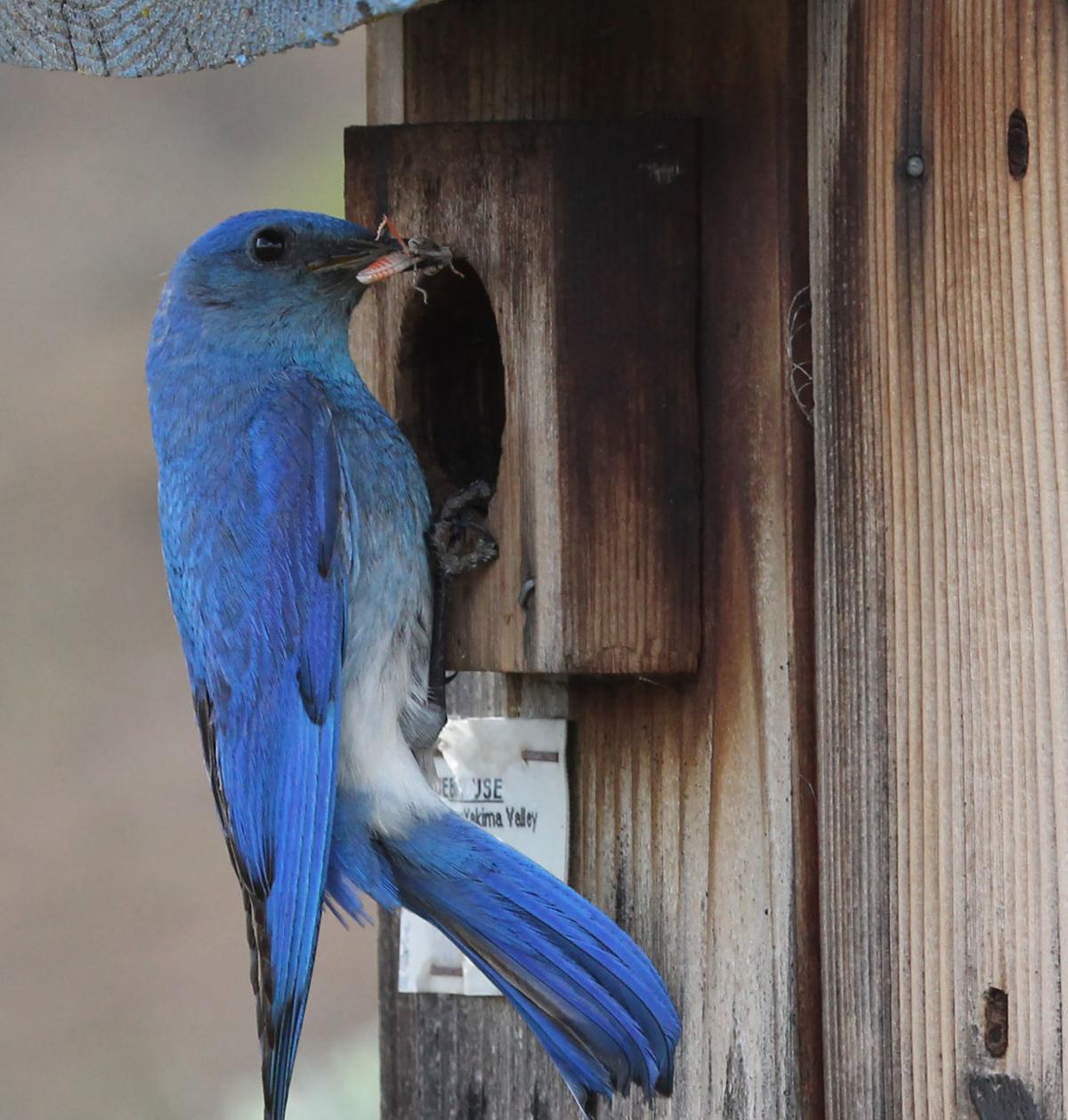 The male Mountain Bluebird has blue on the breast fading to white on the belly.  It feeds on insects like beetles, grasshoppers, caterpillars, crickets and ants. It also eats berries, which are a crucial part of its diet in winter.

This bluebird caught a nice fat bug to eat, but insect populations are declining. Scientists blame disappearing habitat and insecticides, along with climate change and light pollution.

Holes in the nesting boxes are drilled big enough for bluebirds but too small for the larger invasive species.

A bluebird nesting box in the Wenas/Cleman Mountain area.

A male Western Bluebird takes a daring leap. This species can be identified by the rusty feathers on its neck and breast area.

Nest box caretakers record the condition of the box and the presence of eggs or chicks. If they're lucky, sometimes they'll get a glimpse of them hatching.

The male Mountain Bluebird has blue on the breast fading to white on the belly.  It feeds on insects like beetles, grasshoppers, caterpillars, crickets and ants. It also eats berries, which are a crucial part of its diet in winter.

The regular monthly meeting of the Bluebird Trail Committee celebrated more than this group’s love of birds. It also recognized the 98th birthday of one of its first members.

Edith Ryan and her late husband Bill were fledgling members of the committee, an offshoot of the Yakima Valley Audubon Society. She and other avid bird watchers and conservationists are committed to making sure Western and Mountain Bluebirds don’t disappear completely from our parts. They are the caretakers and supporters of the Vredenburgh Nesting Box Trail.

At the mid-January luncheon, Ryan, Betty Peterson, Richard Repp, Karen and Joe Zook, and Mary and Gus Pooler shared stories as well as ideas about the upcoming season of caring for the nesting boxes. Ryan also shared her autographed copy of “The Birds of Yakima County, Washington,” by Andrew Stepniewski, a well-known area naturalist, YVAS conservation committee chairman and past president.

Ryan explained that she first became interested in the bright birds they saw on weekends at their mountain cabin. After more than 30 years of actively monitoring boxes, Ryan no longer makes that weekly trek but does still sponsor upkeep on box number 90.

Other members of the group have also graduated from box caretakers to financial supporters who also attend meetings and bird walks. The Poolers, also in their 90s, spent decades maintaining nesting boxes and have now passed the weekly duties on to others. Peterson still lives on Cowiche Creek in the home she and her late husband Don moved into as newlyweds in 1955. It’s the spot where she learned to love area wildflowers and Stellar and Scrub Jays that visited the area.

Like the longtime members, newcomers also want to honor past efforts at preserving the natural world of our area. Karen (YVAS treasurer) and Joe Zook, as well as Repp (chairman of the Bluebird Trail Committee) still do box care. Bluebirds, which are native only to the Americas, were in serious decline in number after House Sparrows and European Starlings were introduced here in the 1800s.

All three birds are cavity-dwelling, meaning they nest in holes such as a natural hollow or abandoned woodpecker hole in a tree. Loss of habitat is one factor behind their decline. As Repp pointed out, dead trees and snags are often thought of as something to remove, either for firewood or while cleaning up. But they are also prized nesting sites for bluebirds.

In the 1930s, conservationists took advantage of that fact and began building trails of nesting boxes with holes drilled just big enough for bluebirds but too small for the larger invasive species. The trend spread across the country. Bill and Jean Thoren became active in the movement in Montana and continued upon relocating to the Yakima Valley in the early 1980s. Their boxes soon filled with birds and YVAS members joined the efforts.

The Ryans, along with Virginia and Harold Vredenburgh, Mary Rassmuson, Dot and Earl Derry, and Euell and Rosemary Jones joined the effort. Before long, 132 boxes had popped up along North Wenas Road outside of Selah and the dedication of those early trail pioneers, along with that of the Petersons and Poolers, is credited with the ongoing success of the region’s bluebird nesting box project. The group is quick to credit many members of YVAS for that success. Repp also noted that the trail would not have done as well without help from many Wenas residents who allowed boxes on private property and sometimes took over their care.

Box caretakers drive out weekly to the section they are assigned. The lids of the boxes are hinged so they can open them to see if there’s a nest, if there are eggs, and if so, count how many. Volunteers also record the date the chicks hatch and fledge (develop wing feathers that are large enough for flight). If something has damaged the post or box they try to fix it.

The Vredenburghs took charge of the Audubon Wenas Bluebird Trail and it was renamed in their honor in 1994. The first half of the trail is lower elevation with plentiful trees and attracts Western Bluebirds, while the eastern end is about 2,500 feet with more open habitat and is preferred by the mountain species. Over the years other trails were created and maintained by individuals. At one point our region boasted seven trails. According to Repp, poor health or death is usually the only thing that forces birders to give up care of their boxes.

Today, four trails are maintained, including 57 boxes off Highway 410 that the Ryans built and maintained for 27 years. Since then that trail, now called the Ryan Bluebird Trail, has been maintained by the Kinney family. The Zooks tend to 35 boxes near Jones Canyon along the northeast slope of Mt. Cleman and Repp monitors several dozen boxes in Hardy Canyon south of Wenas Road. Twenty-one boxes cared for by the Poolers along Durr Road in Kittitas County will be added to the Vredenburgh Trail this year, bringing that trail to 153 boxes.

“There’s no doubt the box programs sponsored by YVAS have been instrumental in increasing populations of both Western and Mountain Bluebirds in south-central Washington,” Stepniewski said. The nesting boxes attract both species of bluebirds that are native to Washington. They are located along their natural habitat, away from populated areas in semi-open woody terrain where they can perch and watch for bugs. A decline in the insect population is partially blamed for the bluebirds’ struggle to survive.

YVAS kicks off its bluebird season with a campout the first weekend of April. Events include cleaning out boxes where the Vredenburgh trail begins at the end of the pavement on N. Wenas Rd. and continues 14 miles to the intersection with Durr Road. The trail begins in Yakima County and ends outside of Ellensburg with nesting box 82 near the Yakima/Kittitas county line.

Some 16,000 documented birds have hatched on the Vredenburgh trail. Volunteering consists of driving a portion of the trail from mid-May until the last box goes inactive, usually mid-August. Monitors should be fairly mobile because, while the boxes are along a roadside, there may be a bit of a climb to find them. Occasional repairs are needed as the posts can be used by elk for scratching or are sometimes damaged by a snow plow or vandals. Volunteers also fill out a monitor sheet showing the condition of the box including the presence of eggs or chicks as well as when they fly the coop.

“It’s all about timing,” Joe Zook said. “I have actually seen a couple hatching,” he added, saying that rookie caretakers can ride along with experienced monitors.

Repp said the group is hoping to add members — not to expand their trail, but to keep up what is already there. Each October, Repp prepares a report on the condition and status of the nesting box trail which is published online in the YVAS newsletter, “The Calliope Crier,” and sent to box sponsors. According to Repp, sponsorship of individual boxes has been a hallmark of the trail since its inception and folks from around the country help keep the trail going with their financial support.

The committee sponsors a display at the annual Arbor Festival, which is free and open to the public every April at the Yakima Area Arboretum. The information they provide is timely because the best season to drive the trail is often the first two weeks of June. The birds are usually very active with nestlings and may be seen near the boxes.

According to Ryan, “the wildflowers are best around then and it’s a really good time to find young bluebirds in the nest.”