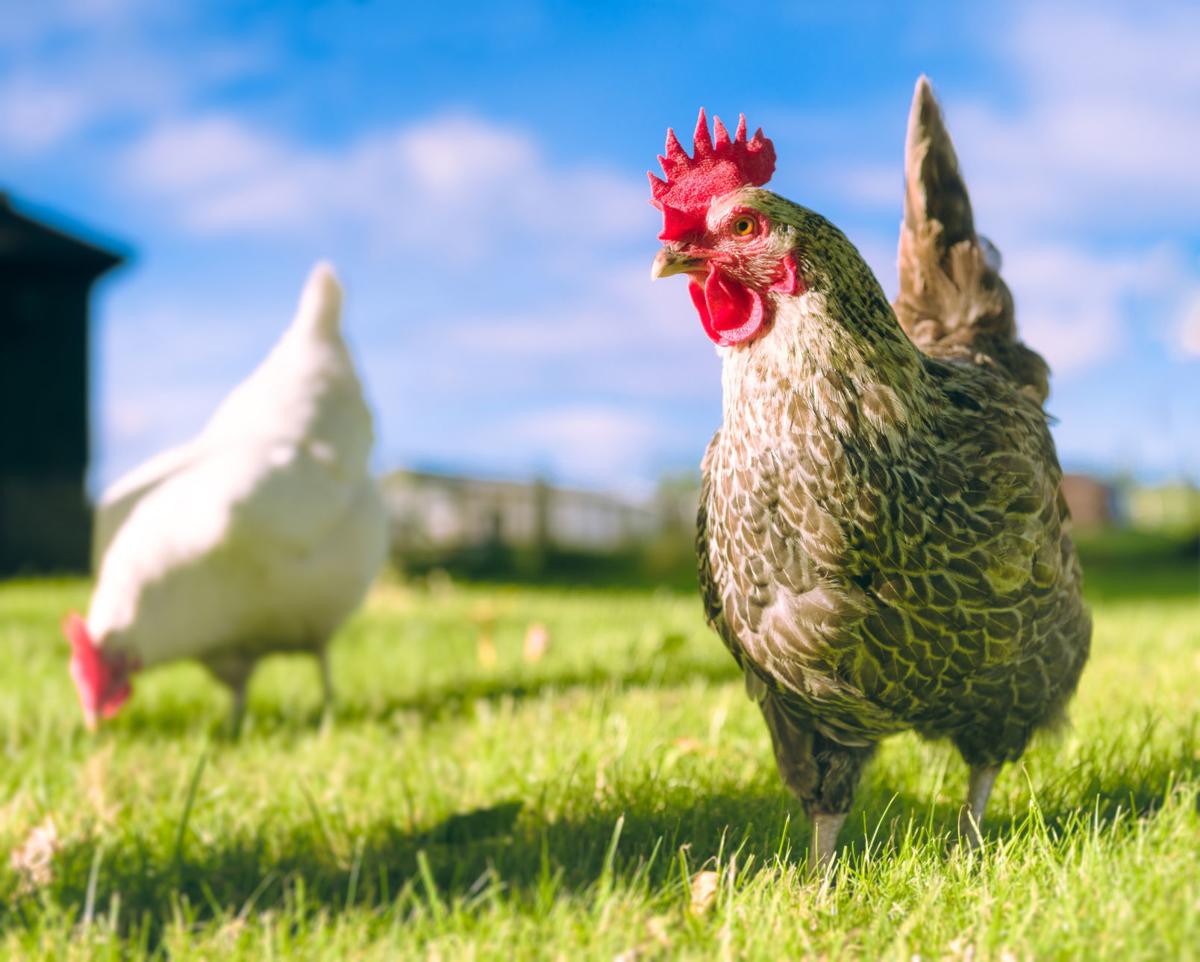 Roughly 10 million, or 8% of U.S. households had chickens in 2018, according to the American Pet Producers Association. 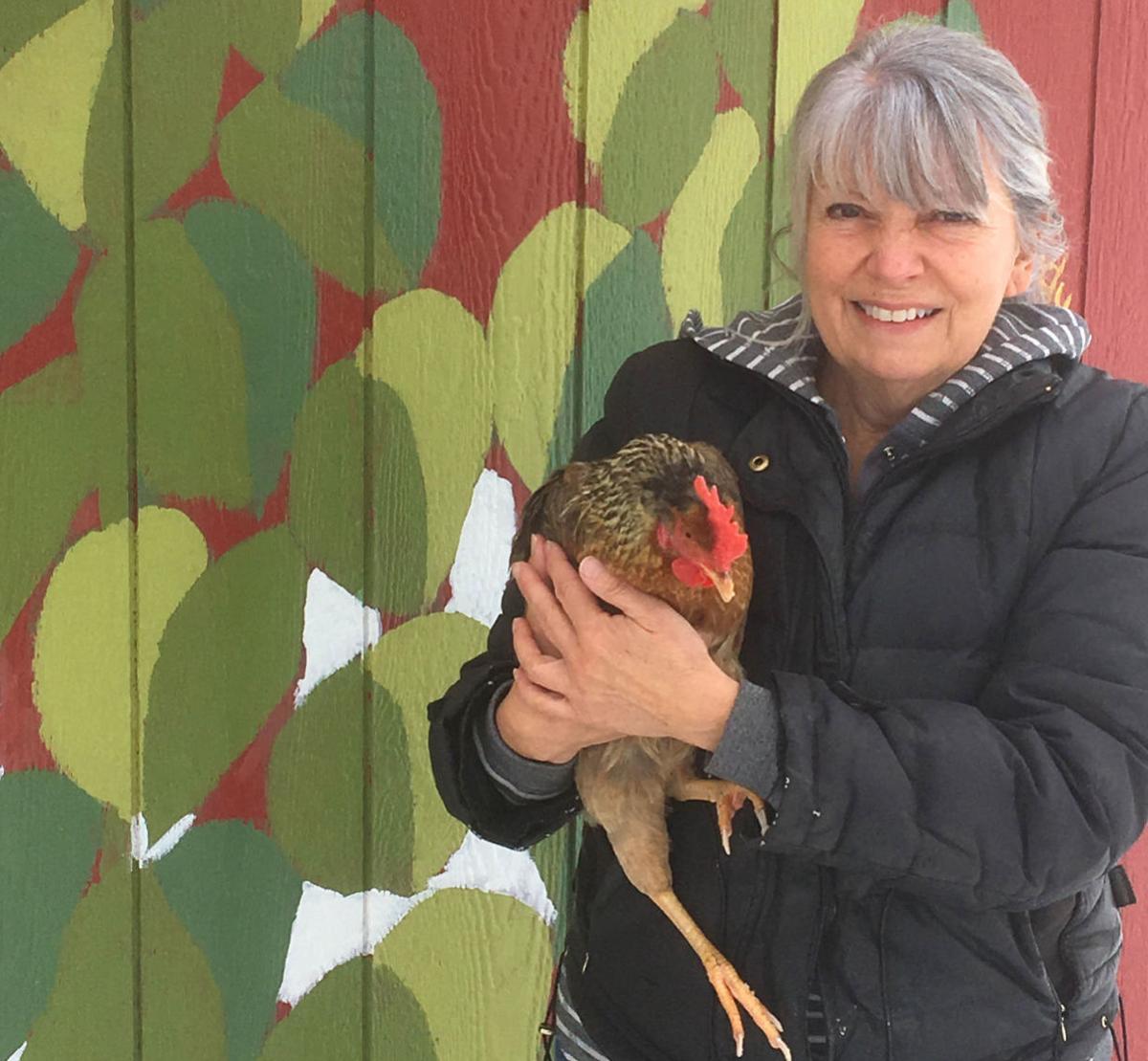 Lindy Sheehan holding one of her flock at her Selah home in January. 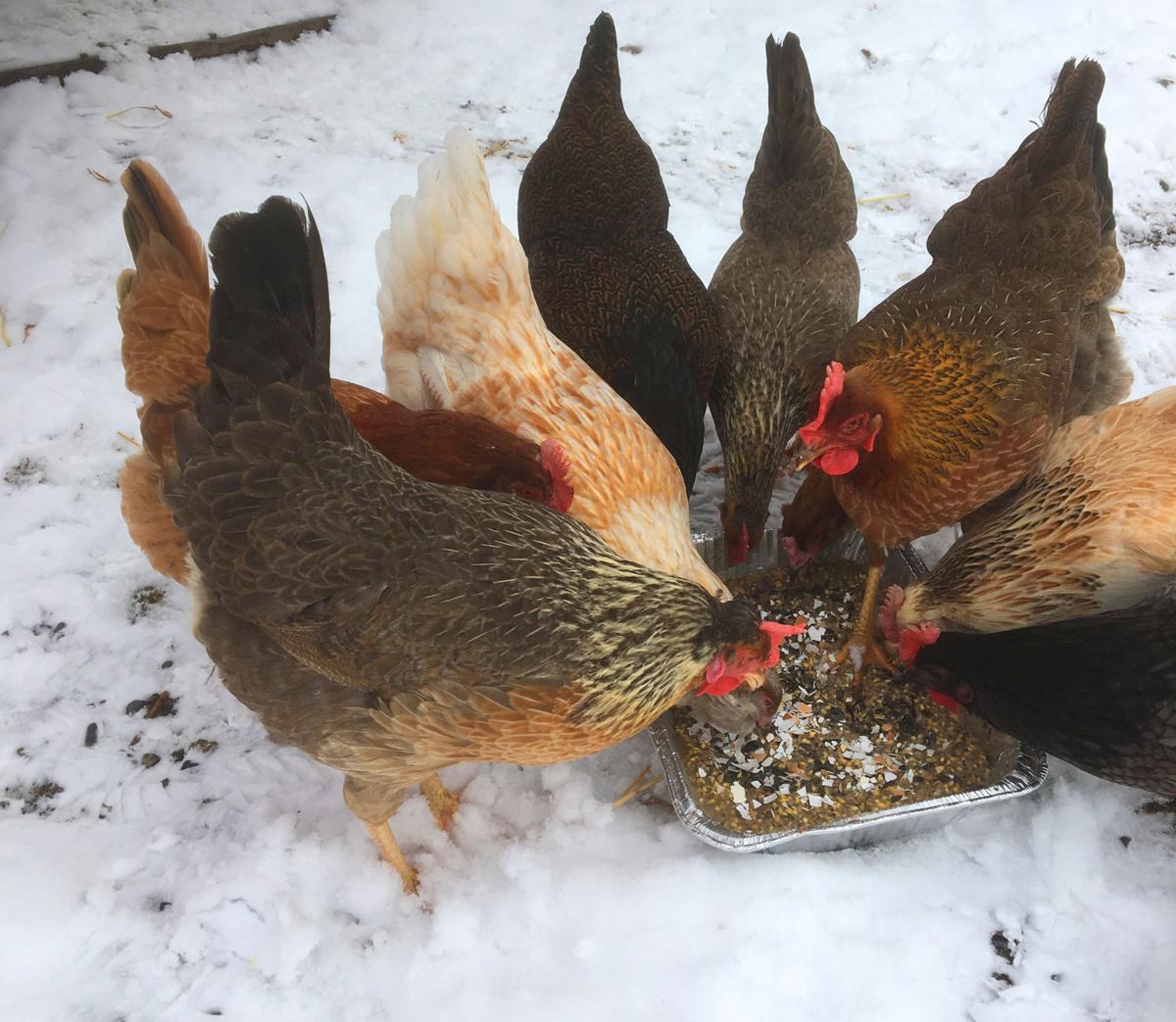 Though chickens can survive on what they forage in the yard, they'll be healthier if you give them organic feed along with grit, scratch and oyster shells. 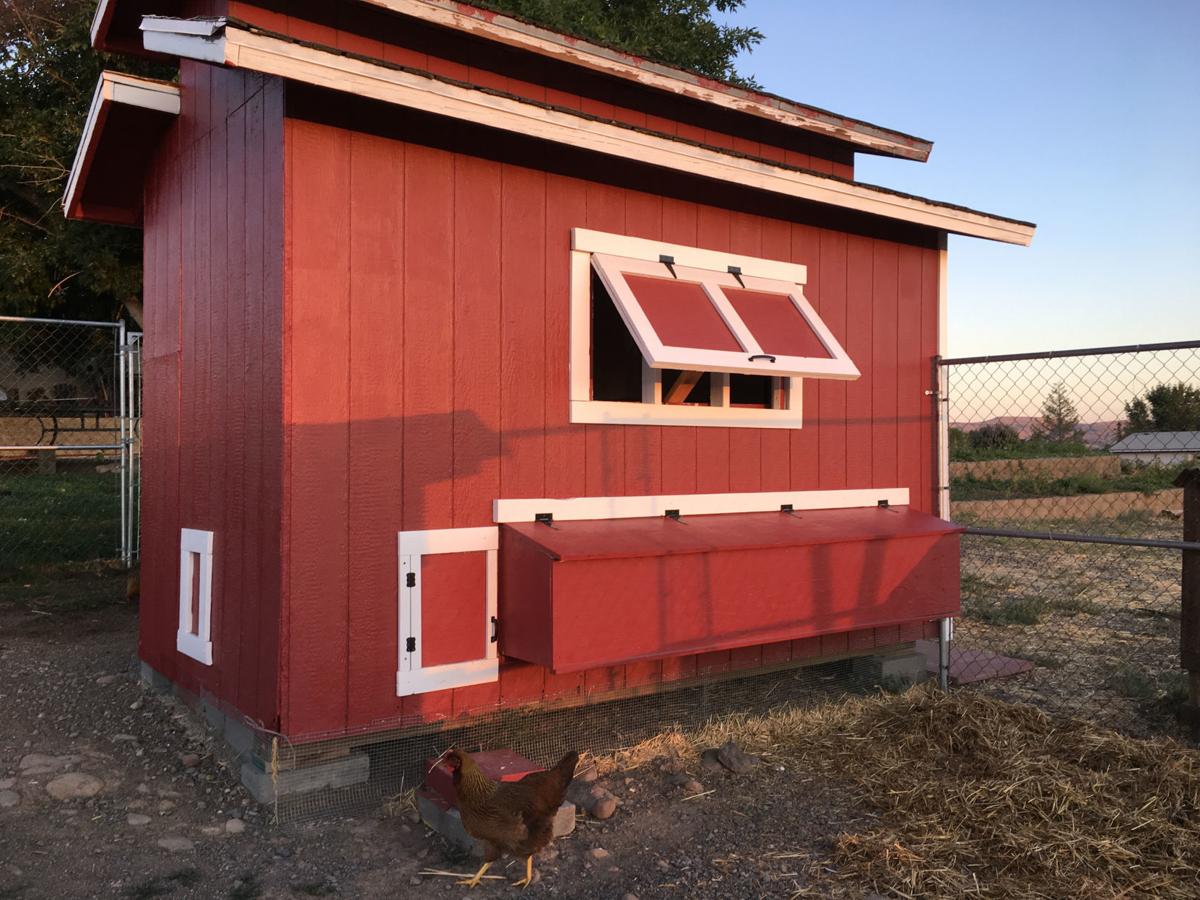 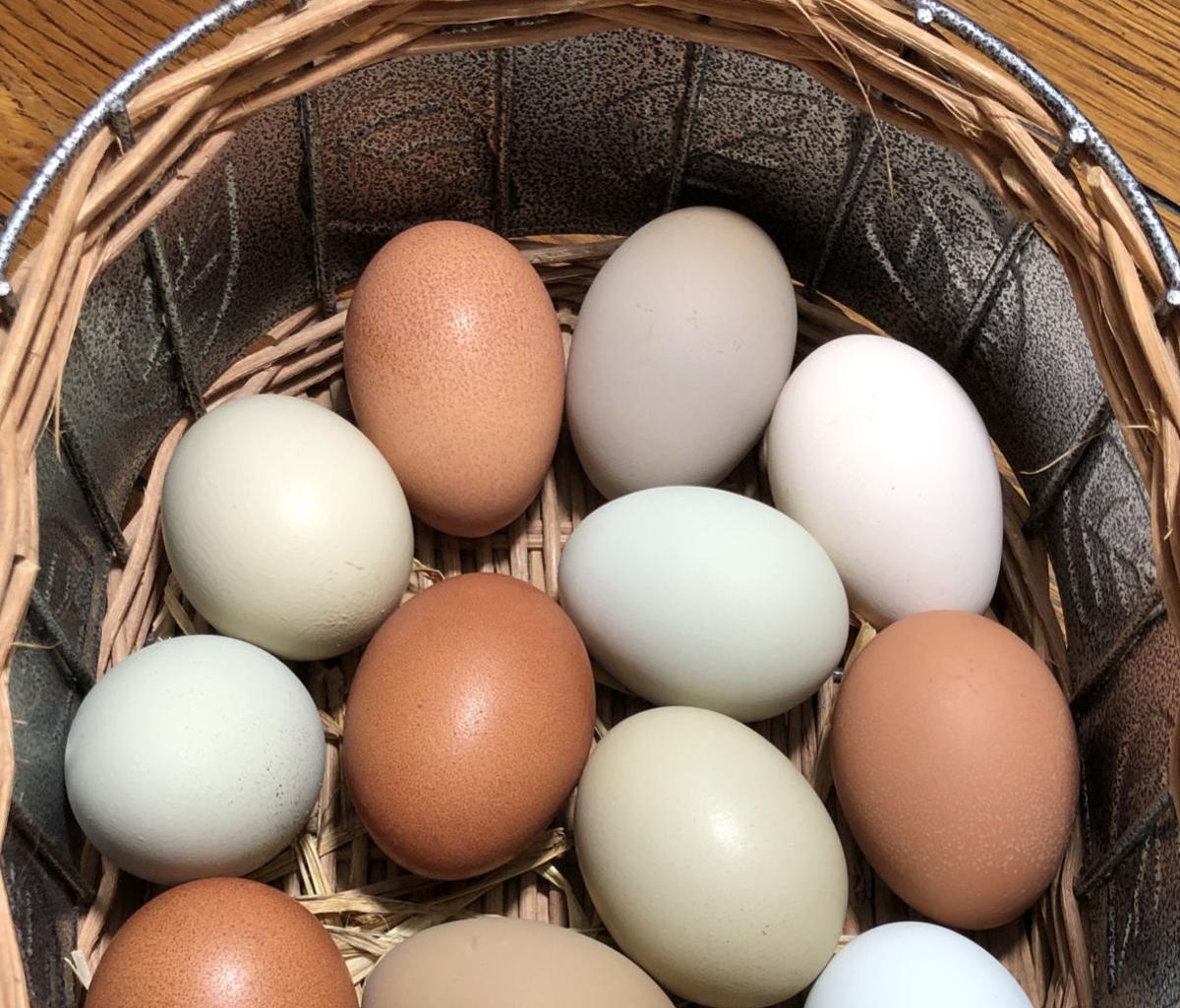 The breed of hen determines what color eggs she will produce. Other than color, there is no major difference between eggs. 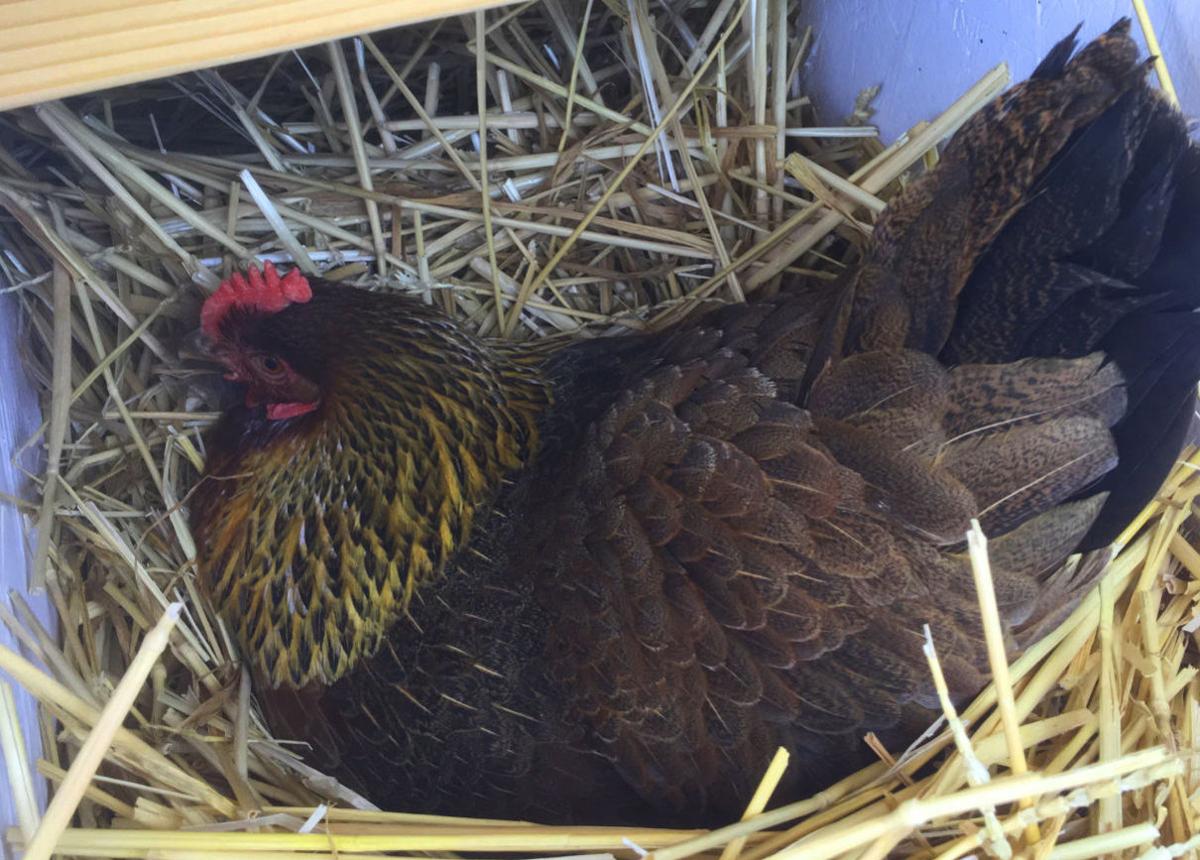 Roughly 10 million, or 8% of U.S. households had chickens in 2018, according to the American Pet Producers Association.

Lindy Sheehan holding one of her flock at her Selah home in January.

Though chickens can survive on what they forage in the yard, they'll be healthier if you give them organic feed along with grit, scratch and oyster shells.

The breed of hen determines what color eggs she will produce. Other than color, there is no major difference between eggs.

I had a date to meet Lindy Sheehan and her flock of 16 chickens one freezing morning in January, but there were no chickens in sight. Turns out, I just didn’t know where to look. Answering Lindy’s call, they emerged from sheltered nooks and waddled over. They walked in single file, perfectly illustrating exactly what “pecking order” means. Gathering at our feet, and trilling a chicken song, they were curious to see what treats Lindy might have to offer.

Against a backdrop of white snow, the intricate patterns and rich colors of their feathers were amazing. They didn’t seem to mind the weather. After all, chickens come equipped with down jackets, just like ducks and geese.

Lindy grew up with chickens in a 4-H family on a ranch outside Waterville. Five years ago, she moved from Seattle to this home on 1.3 acres of pasture on a hilltop north of Selah, joining an estimated 3,000 Yakima County residents raising chickens.

If I were a chicken, I would dream of living at Lindy’s. The spacious coop she created from mostly salvaged materials is what a hen wants in function and utility, and then some. Egg-layers appreciate some privacy, and Lindy provides it with ladybug patterned café curtains on the egg boxes. Outside are separate areas for feed and water, and a gazebo for dust bathing. Bedecked with a sunflower mural covering an exterior wall, this coop could be a child’s playhouse.

The chickens were awake at dawn, but were locked in the coop the night before for their safety. The most important meal of the day for a chicken is breakfast, and if it’s late, Lindy can count on the hens to raise their voices and remind her what time it is. Once she unlocks the coop, the girls can leave to feed and forage anywhere on the gated and fenced property. Chickens are omnivores, and everything is on the menu. They especially love vegetation, and aren’t picky about what kinds. To keep them safe, Lindy avoids herbicides and pesticides.

Every evening after work, she collects wondrously colored and sometimes speckled eggs, and may throw out a few handfuls of scratch (mixed grain feed). On the morning I visited, she treated the hens to a pan of fermented grains, with some home-grown egg shells stirred in for extra calcium.

As for bedtime, “They know when it’s time to come in,” she said, and after the flock returns to roost, she’ll lock the coop once again.

While this free-ranging set-up is chicken nirvana, it poses some challenges. Lindy’s flower and vegetable gardens may as well come with a sign offering “Free Lunch.” Lindy left a flat of petunias outside last summer, and you know the rest of the story. She takes it all in stride, planting a little extra for the chickens.

Chicks will go on sale in feed stores in late winter. Before they’re ready for life in an outdoor coop, Lindy keeps them in a brooder she improvises from a cardboard appliance box and a heat lamp for about six weeks.

Raising backyard chickens is fun and satisfying, and you may be tempted to bring home a few fluff-balls of your own. Here are some things to know and questions to ask yourself before making a decision:

You don’t have to live down a country road to raise chickens. Residents of the city of Yakima may keep four hens, but no roosters (noise control). The coop must be set 10 feet away from the property line. Chickens don’t need to be confined to a coop, but can’t leave your property. Poultry at large are a misdemeanor. If you live outside the city, other ordinances may apply.

Hens don’t need roosters to produce eggs. Increasing day length is what stimulates egg production. Generally, four to five hens will supply two to four eggs each day during their production cycle. Young females are capable of laying eggs at about 5 to 7 months of age. Chickens live 6 to 7 years, but expect egg production to slow or halt after 3 or 4 years.

What do you want your chickens to look like? Lindy raises six breeds, each with unique color and feather patterns. And just like dogs, each chicken breed has its own temperament. If egg production is your main interest, do you care which color the eggs are?

If you’re raising chickens in a small backyard, the coop must be big enough to house a feeder and water containers, a roosting area, and a nest box for every three hens. Ideally, a coop should be large enough that you can stand up to gather eggs and shovel manure without incurring a head injury. The minimum rule of thumb is about 2 to 3 square feet per chicken inside the coop, and 8 to 10 square feet per chicken in an outside run. More square footage is better. Skimping on space requirements can cause stress, cannibalism, aggressive pecking and sometimes even death.

Housing must be sturdy enough to keep your birds safe from all the predators out there, hungry for a chicken dinner. For Lindy, coyotes are always a threat. If you live in the city, don’t think you won’t have to worry. I share my Barge-Chestnut neighborhood with hawks, feral cats, stray dogs and owls. A badger ambled through my garden one day last spring. Raccoons are sighted on a weekly basis, and they killed a neighbor’s chickens two years ago. The young family learned the hard way that effective security programs require multiple layers of protection. Lindy warns that one thing for sure:“If you build it (a chicken coop), they will come (predators).”

In central Washington winters, collecting eggs, shoveling snow and manure, and hauling water and feed can be a bigger burden if the coop is in an inconvenient location. It’s harder for chickens to stay cool in the heat than to stay warm in the cold, so locating the coop in summer shade can be helpful.

Hens might survive by eating only what they forage in the backyard, but they won’t be as healthy as they should be. Lindy buys organic feeds for her chickens. They require a few supplements, such as grit, scratch and oyster shells.

Can you compost? Estimates vary, but the University of Missouri Extension reports six commercial laying hens will generate approximately 11 pounds of manure every week. Chicken manure is too strong to be used fresh on flowers or vegetables. It can also harbor viruses, worm eggs or bacteria. After being properly hot-composted, however, it’s “black gold” for every garden.

Chickens pose a relatively low risk of transmitting disease to humans, but there are a few infections that can be passed back and forth. Follow all guidelines for proper care and handling of manure, eggs, and the chickens themselves.

When to say goodbye? There’s one more thing. My mother-in-law’s chickens on her South Dakota farm were raised as livestock, providing eggs and meat. They were never named and were no one’s pet. When they stopped laying, or when they were sick or injured, the chickens were served for Sunday dinner.

When you raise chickens, expect that there will come a time when care for a sick or injured bird is not enough and euthanasia becomes necessary. Decide what you are personally capable of ahead of time.

And when purchasing chicks, remember that even the most reliable sexing methods have a margin of error. Have a plan for roosters that can’t be kept.