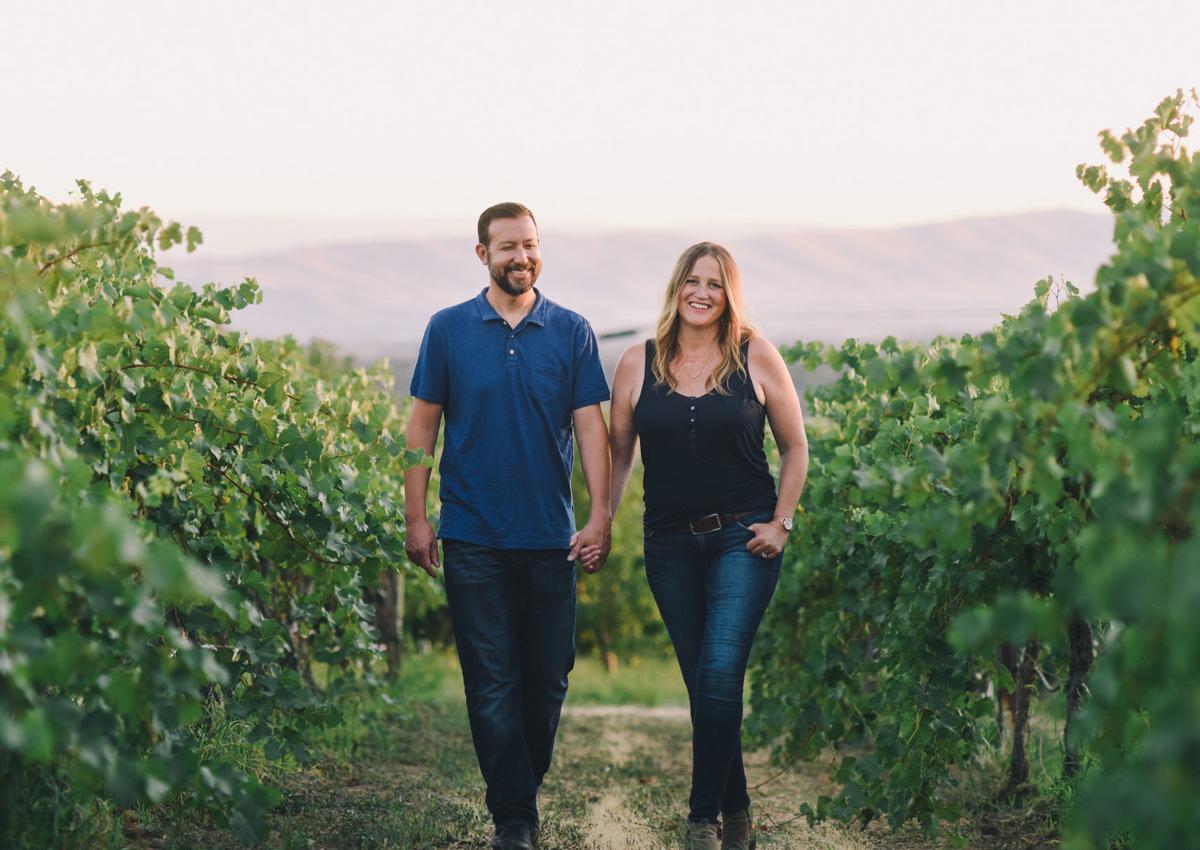 Lee and Emily Fergestrom stroll through a vineyard in the summer. 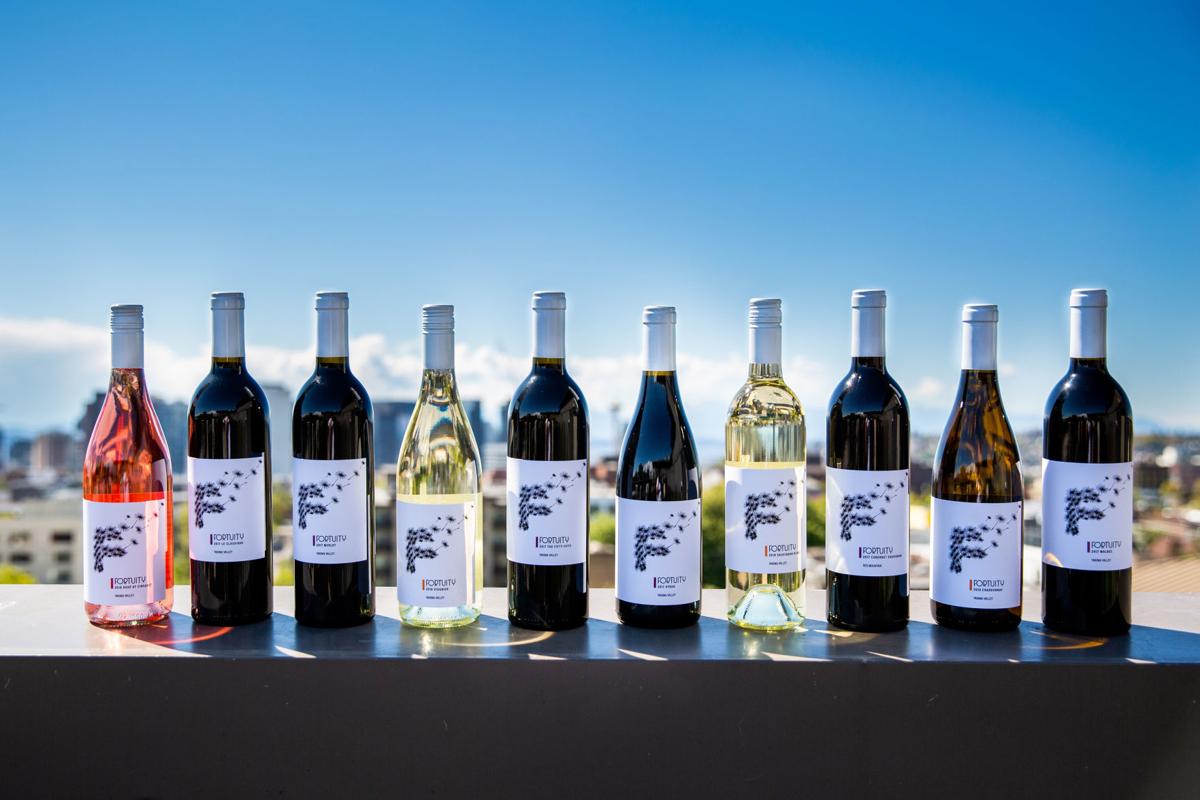 The lineup has reds, whites, and rosé. 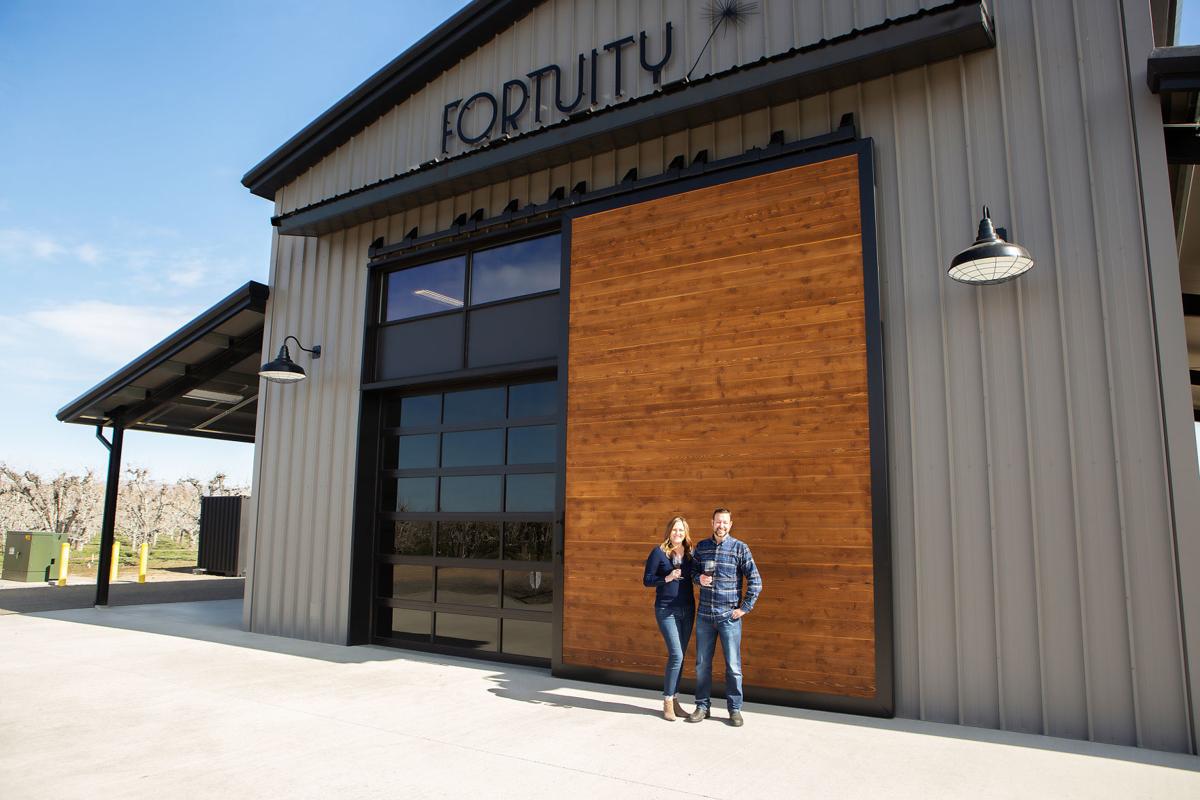 Their new 2,400 square-foot facility in Wapato is half winery, half tasting room. 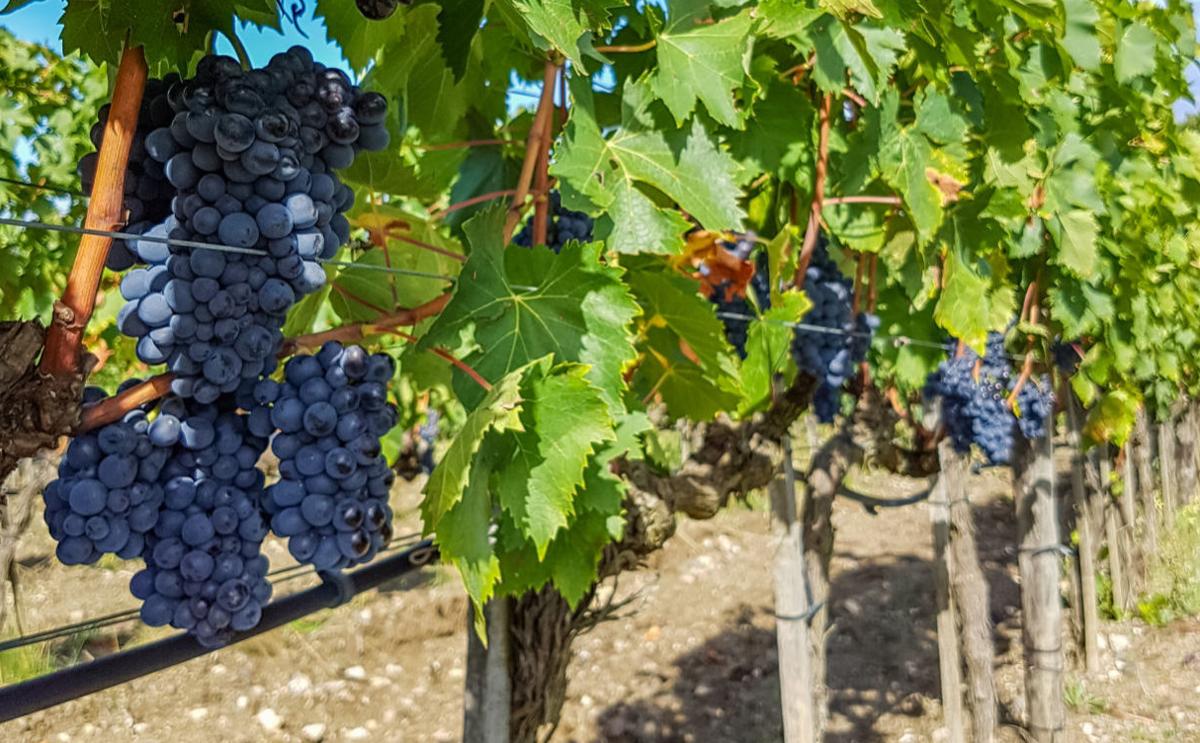 Great soil, proper temperature and precipitation are what create the Yakima Valley American Viticulture Area (AVA) — a hotbed for growing some of the best wine grapes in the world. 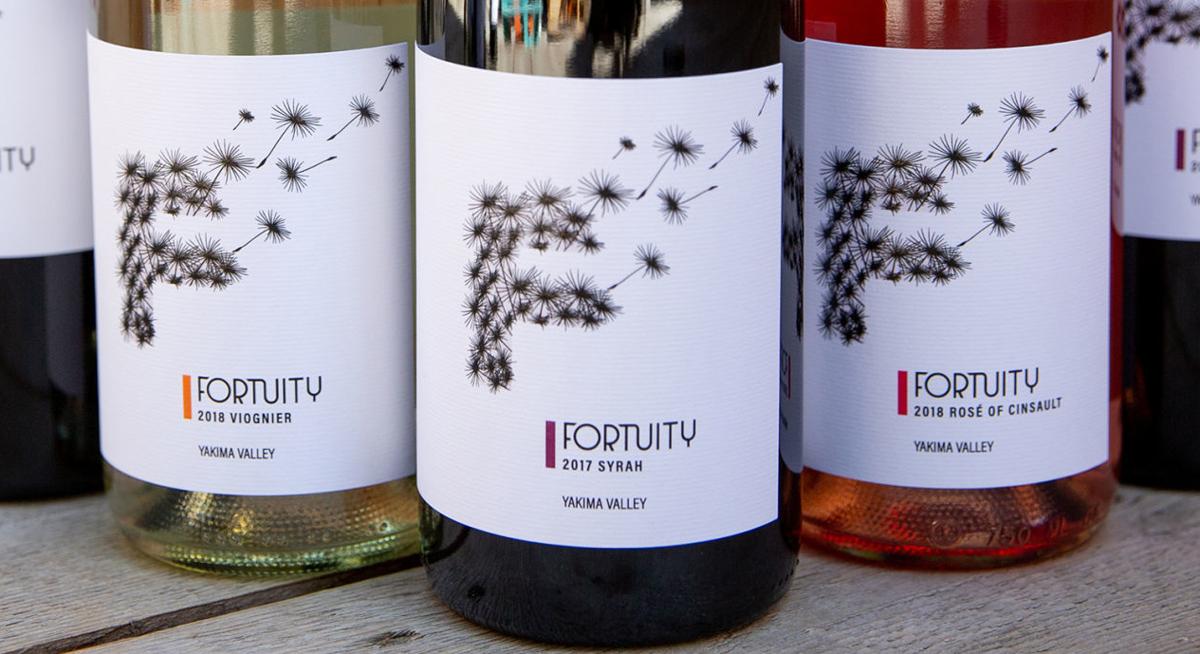 Viognier, syrah, and rosé of cinsault - just a few of Fortuity's offerings. 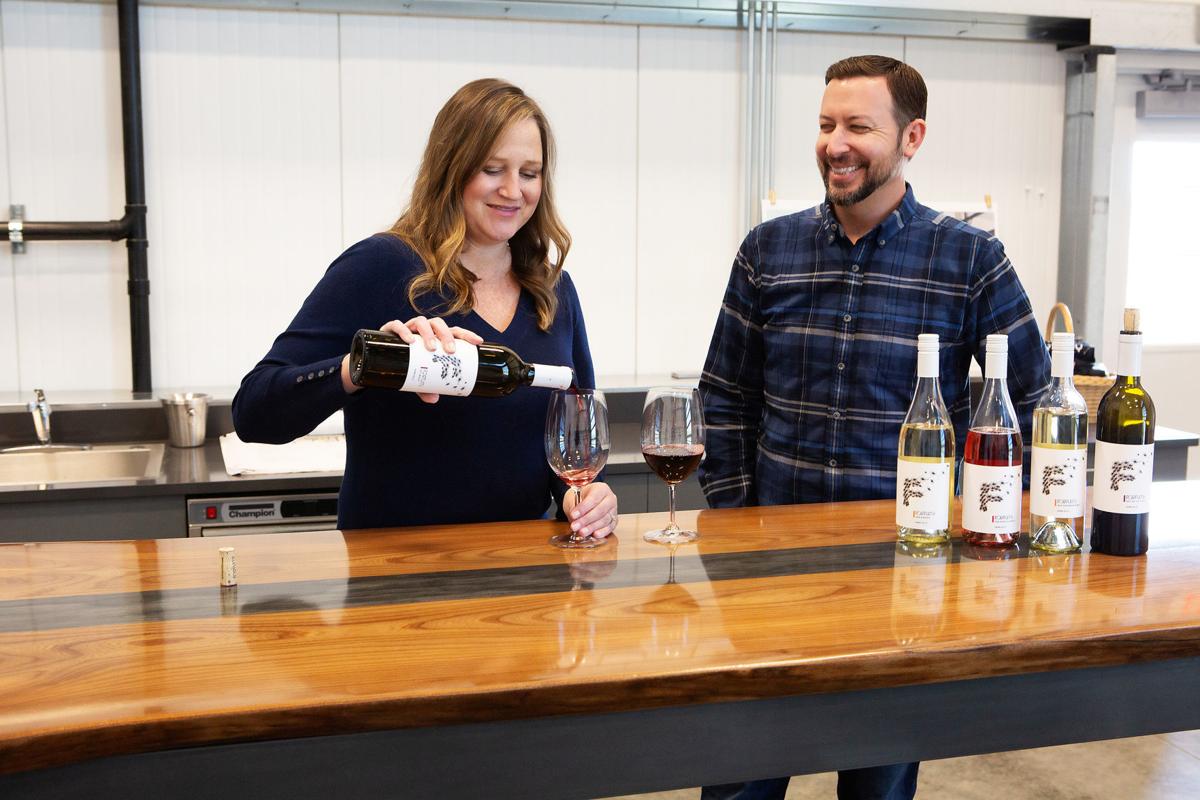 Pouring wine in the tasting room.

Lee and Emily Fergestrom stroll through a vineyard in the summer.

The lineup has reds, whites, and rosé.

Their new 2,400 square-foot facility in Wapato is half winery, half tasting room.

Great soil, proper temperature and precipitation are what create the Yakima Valley American Viticulture Area (AVA) — a hotbed for growing some of the best wine grapes in the world.

Viognier, syrah, and rosé of cinsault - just a few of Fortuity's offerings.

Pouring wine in the tasting room.

Every couple of years, a buzz occurs in the wine industry. It might be a winery, a winemaker or a vineyard, but something will be a standout. At Taste Washington in March of 2013, an annual wine and food event in Seattle, I distinctly remember it was a new Woodinville winery called Avennia. It was that year’s “it” winery. Nearly 20 people recommended it to me that weekend, and for great reason. Since then, reviewers have continuously given Avennia’s wine high scores, and winemaker Chris Peterson was Seattle Magazine’s Winemaker of the Year in 2017.

Fortuity Cellars in Wapato may become the latest Washington wine industry standout. What started as an epiphany in 2016 for husband-and-wife team Lee and Emily Fergestrom became a reality a few months later. The duo was newly married, had done some wine tasting, and after relatively little discussion they decided, “Let’s open a winery.”

I will tell you, I have said those words a hundred times over the years. Nearly every person I have gone wine tasting with has whispered those words in my ear in a library-like tasting room, or shouted them from across an open vineyard in a semi-inebriated state. People may say it, but hardly anyone really does it, especially when they aren’t born or married into it.

Emily, a West Valley native, had been gone from the area for two decades. She spent the majority of her time in communications and public relations and was ready to return to her roots. Lee, on the other hand, was in the startup and tech world. They wanted to do something different. Something for themselves. Something they could be proud of. They realized a winery could accomplish all of those things.

The couple was young and energetic. They didn’t worry at first about hurdles like where they’d get the money to produce a thousand cases of wine. What they concentrated on was how to get their hands on the best grapes. They knew the Red Mountain wine region was a key source and headed south to the Benton City area full of passion for their future. By the end of the day, the couple had secured cabernet sauvignon grapes from Kiona’s famed Heart of the Hill vineyard with little more than a vision and the desire to share it with others.

Continuing their quest to open a successful winery, they recruited longtime winemaker and friend Johnny Brose to plan their attack and make their wine. Next, they met with Matt and Pat Rawn from Two Mountain Winery, who were eager to help foster the newest generation of Yakima Valley wineries. The Rawns let Fortuity make their first vintage in 2017 under the Two Mountain roof. They produced 856 cases that first year, including rosé, viognier, a barrel-aged chardonnay, a red blend of syrah and malbec, and a cabernet sauvignon.

Soon after the inaugural vintage, the team found out about Yakima Valley College’s wine incubator space in Grandview. It was a dream space for them in the early stages. At that point, there was a lot of money going out for barrels, bottles, cork and obviously the grapes, but little coming back in from sales because half the wine needed a year or two to mature. The budding winery produced 1,300 cases of wine in 2018, its first year in the incubator.

Most wineries take up to five years to grow and move from the incubator to a new facility after they have reached some level of success. The Fergestroms weren’t content with waiting for success to trickle in. They were ready to harness their momentum and dive in the deep end. The success of their Founder’s Wine Club (private sales prior to public release of any wine), was not only enough to help them secure a Small Business Association loan, but earn them the title “SBA Rising Startup of the Year” for Washington and North Idaho for 2019. Not bad, considering their beginnings.

The loan helped them build a 2,400 square-foot winery in Wapato. The space is currently split — half for the winery and half for the tasting room, as they continue to grow in the old Sawyer Gardens space. Weather permitting, the tasting room will move outside for most of the summer.

The location isn’t all that has changed. Their production rose again in 2019 to 1,400 cases on approximately 22 tons of fruit. In 2020, they expect to increase that by more than a third, to 30 tons.

A Washington native and graduate of the Enology and Viticulture program at Walla Walla Community College, Sells spent four harvests working in Walla Walla before becoming an enologist at Duckhorn.

This all leads back to the winery’s name — Fortuity. It means “Taking advantage of life’s chance moments.” Lee and Emily agree they’ve done that from the very start. Their first date was a chance encounter that was never supposed to happen.

Every conversation they’ve had with mentors and collaborators like the Rawns, the Sauer family from Red Willow Vineyard and Williams from Kiona, the folks from Cultura, Purple Star, and Co Dinn, among others, has been fortuitous. Their success has not come from luck but from reaching out, and the Fergestroms have earned every bit of what they have.

“No one knew us,” Emily said. “We had to be out there and get our names out ourselves.”

The new winery should be open in April and they plan numerous events to showcase their latest releases. Look for their rosé to be a hit of the summer, as well as the surprising “Fifty Fifty”, named after the equal blend of syrah and malbec. A true surprise in the glass, it’s something that would be illegal in some areas of France, but fits right in here.

It wasn’t something they specifically planned on, but thoroughly enjoyed once they tasted it. The blend was simply fortuitous.