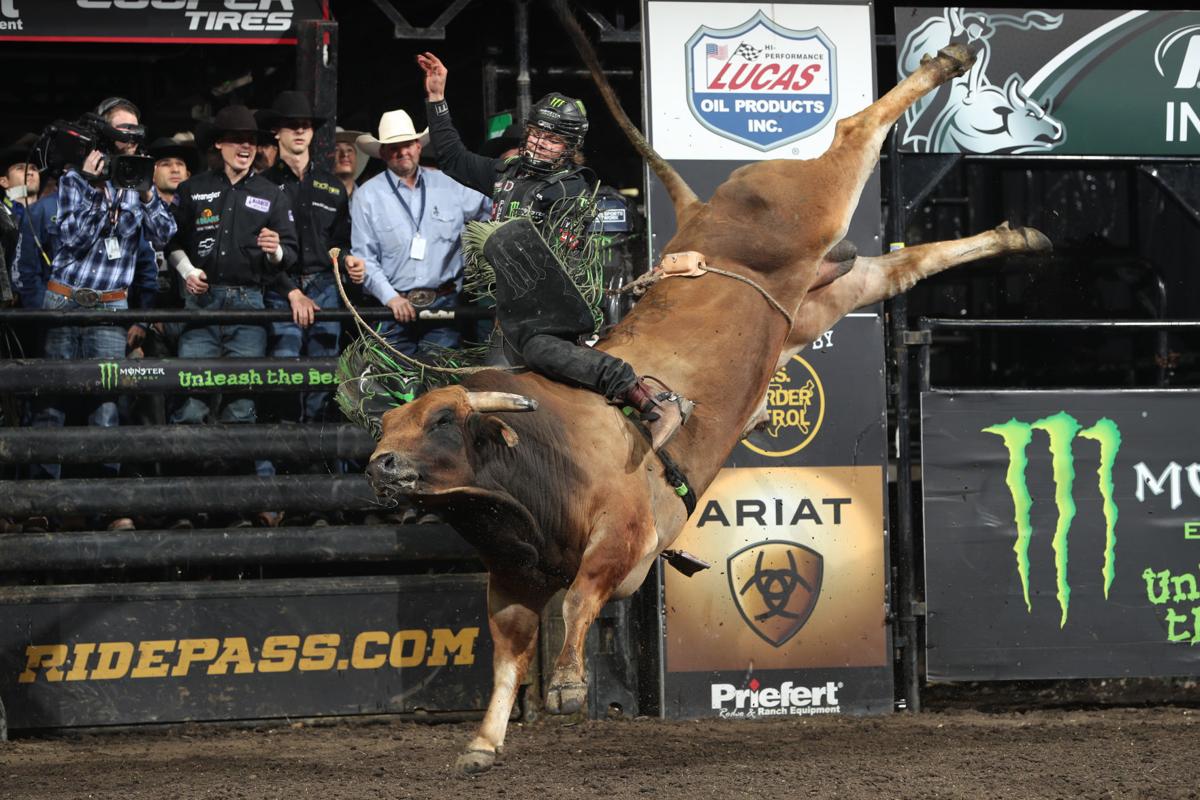 Derek Kolbaba attempts to ride “Cha Ching” during the third round of the Sioux Falls PBR Unleash the Beast in April 2019. 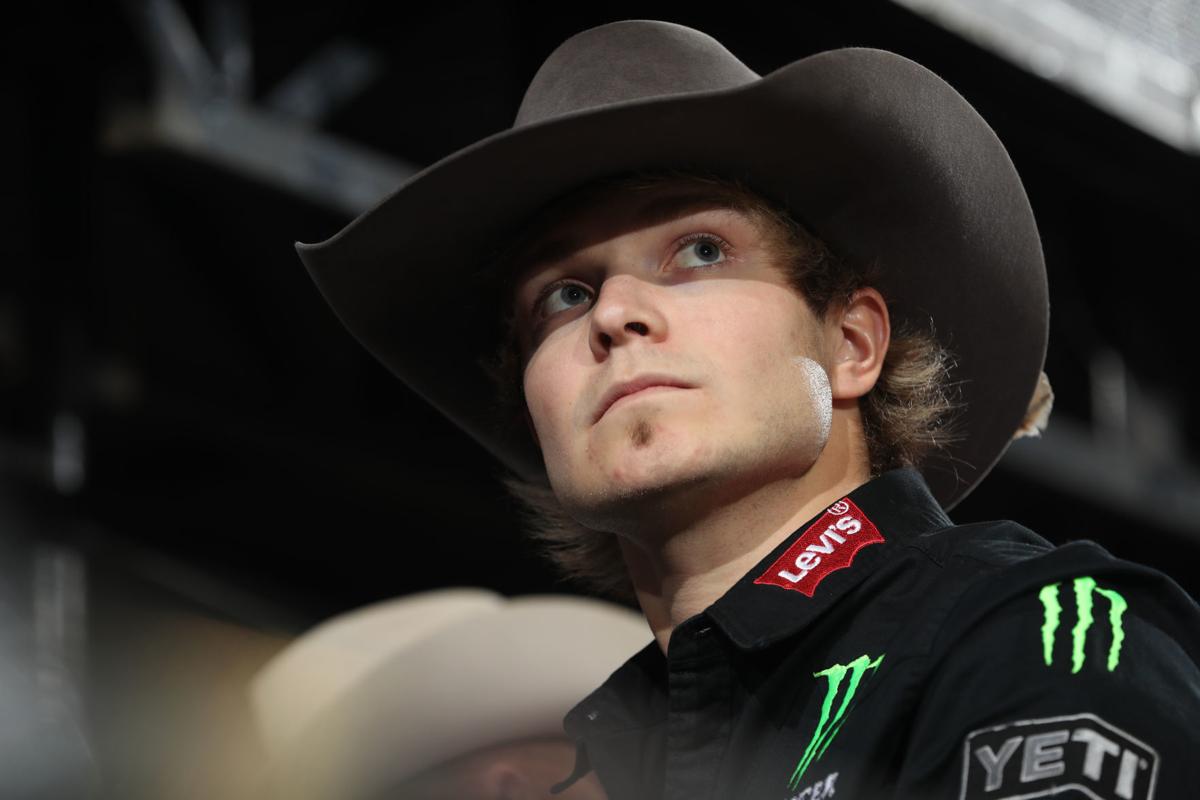 Derek Kolbaba during the first round of the Chicago PBR Unleash The Beast in March 2019. 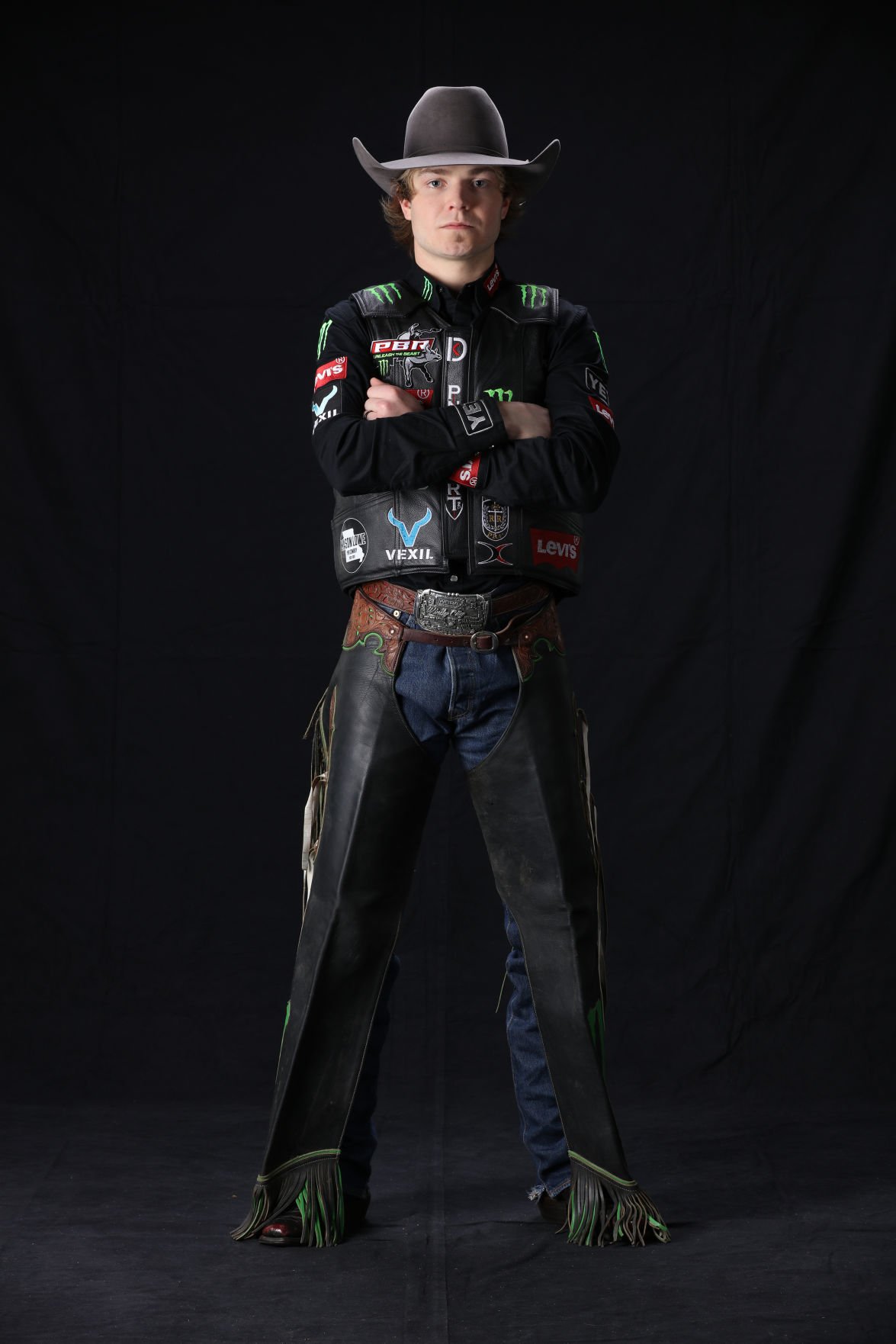 “Bull riding is everything to me. I eat, sleep, and breathe it. Since I was old enough to talk, bull riding is what I dreamed of,” says Derek Kolbaba. 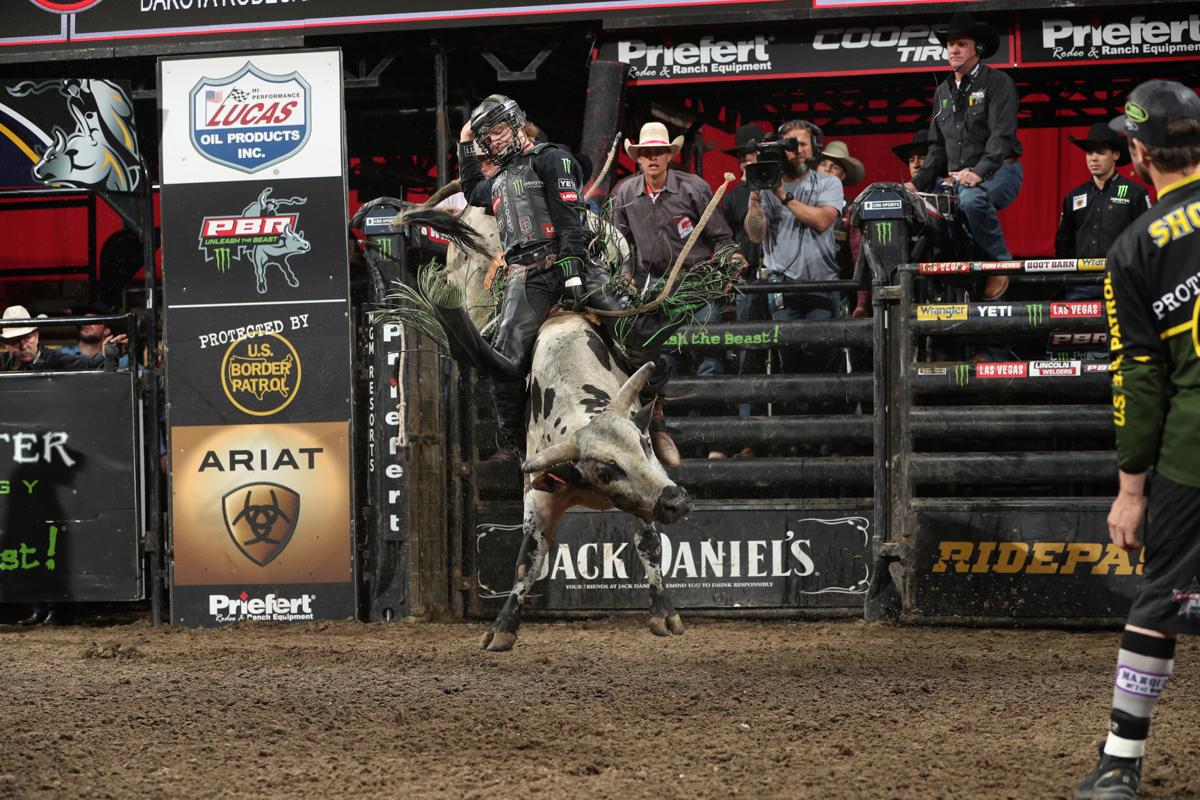 Derek Kolbaba rides Stretch during the Bucking Battle round of the Columbus PBR Unleash the Beast in April 2019. 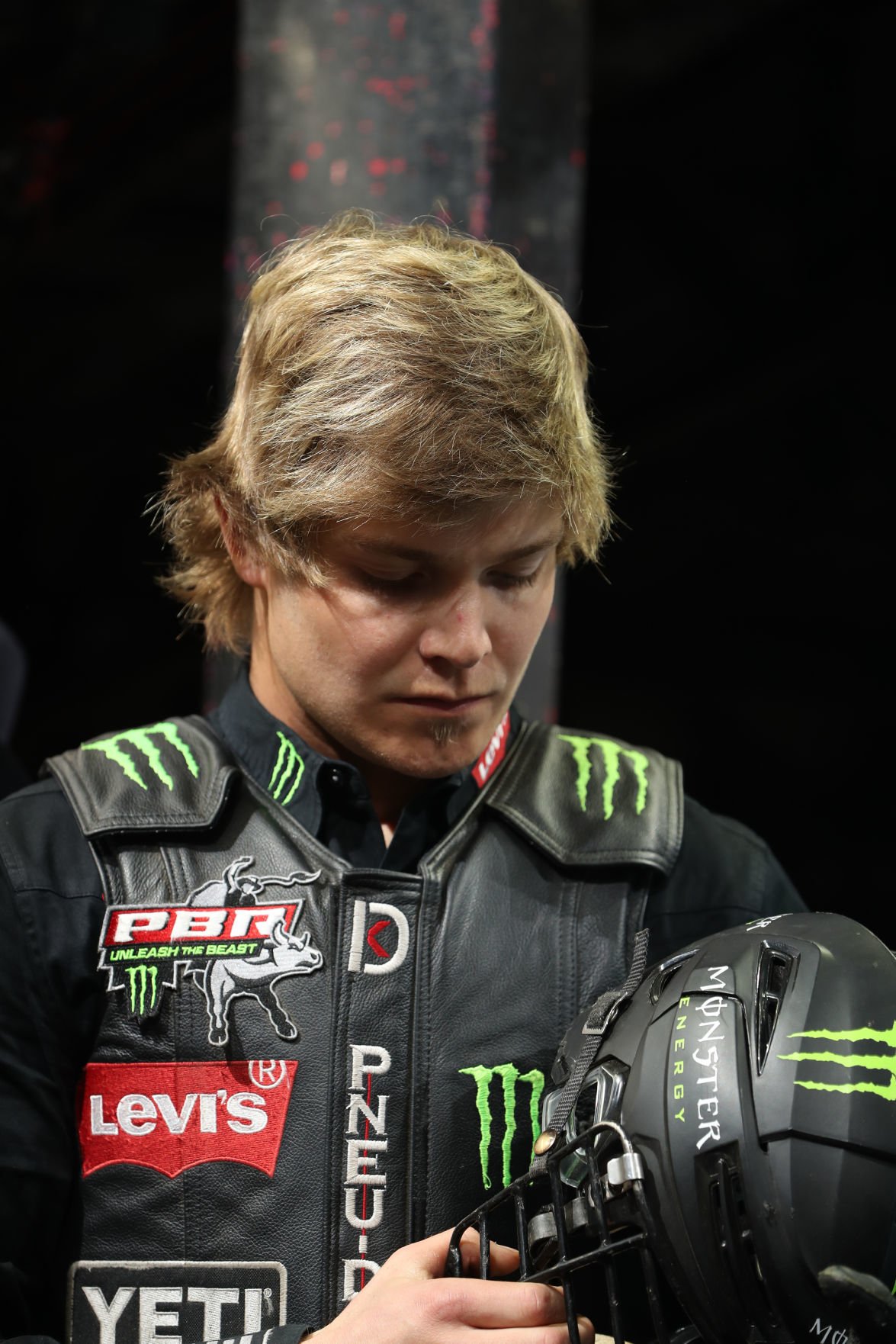 Derek Kolbaba finished 17th in his first PBR World Finals at the age of 19. The next year, he placed second. 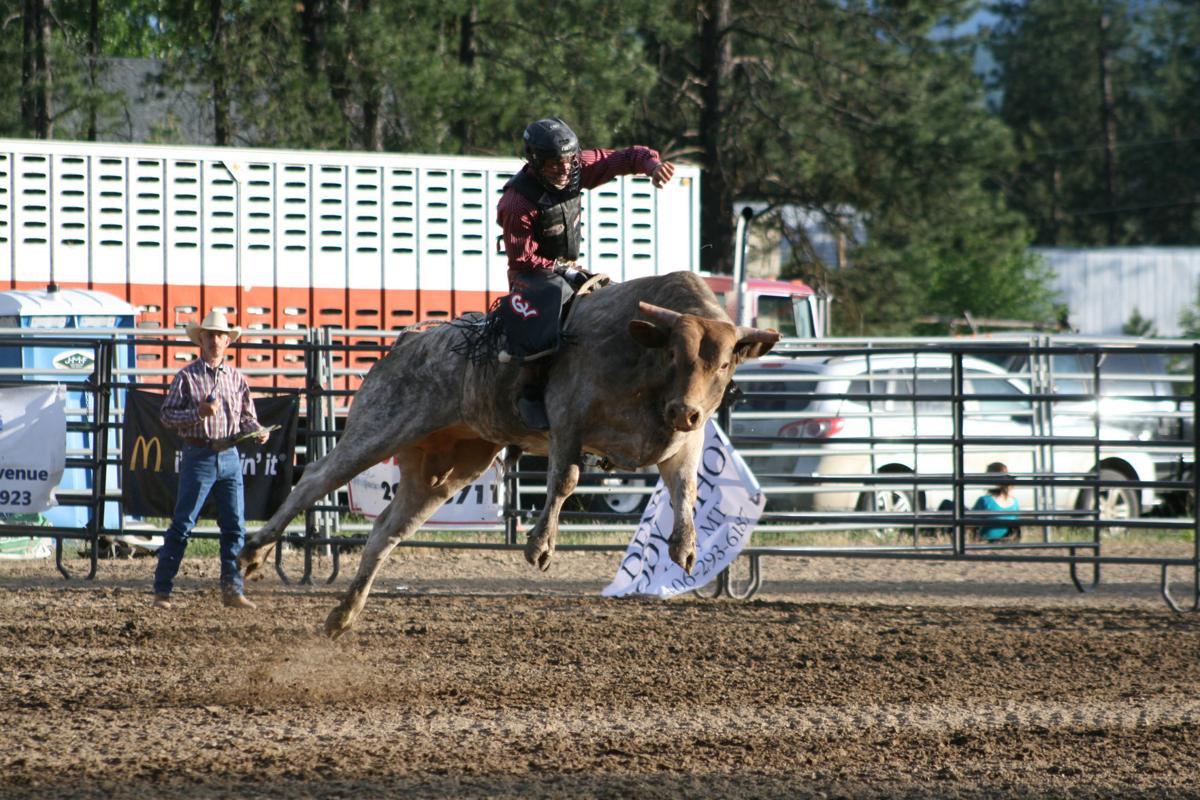 Cody Loomis on the back of a bull that’s gone airborne in Libby, Montana in 2013.

Derek Kolbaba attempts to ride “Cha Ching” during the third round of the Sioux Falls PBR Unleash the Beast in April 2019.

Derek Kolbaba during the first round of the Chicago PBR Unleash The Beast in March 2019.

“Bull riding is everything to me. I eat, sleep, and breathe it. Since I was old enough to talk, bull riding is what I dreamed of,” says Derek Kolbaba.

Derek Kolbaba rides Stretch during the Bucking Battle round of the Columbus PBR Unleash the Beast in April 2019.

Derek Kolbaba finished 17th in his first PBR World Finals at the age of 19. The next year, he placed second.

Cody Loomis on the back of a bull that’s gone airborne in Libby, Montana in 2013.

“With bull riding, you’re either all in or all out — your world revolves around it.”

Since Derek Kolbaba was 7 years old, he’s been all in, and he hasn’t regretted one minute of it. But it was even before then that his love for rodeos was first sparked.

“Bull riding is everything to me. I eat, sleep, and breathe it. Since I was old enough to talk, bull riding is what I dreamed of,” he says.

At age 3 he rode his first sheep, and at 7 he got on his first calf in White Swan — an event he ended up winning, earning a set of spurs and a $100 check.

Every chance his family got, they were either going to rodeos or riding horses. Derek’s father rode professionally in the '90s and his great grandfather took stock (bucking horses and bulls) to the first National Finals Rodeo in 1959.

Derek was born and raised in Joseph, Ore., “One of the most beautiful places in the world to grow up,” he says. But at age 11, his mother decided to move the family to Walla Walla. Although it was hard to leave his extended family, it was one of the best things for him because their new location was central to the rodeo circuits. He spent that entire first summer getting his feet wet in junior rodeos, working hard, learning, and progressing.

Around this time, his dad sat him down and asked him if he was serious about becoming a bull rider. There was no question in Derek’s mind that this was his path, and his whole family got on board, accompanying him to junior rodeos, many of which were hours away.

“It was such an awesome thing to have a family that supported me like that. These rodeos and time together helped bring me up in every way,” he says.

At 15, Derek began getting on bigger bulls and he told his dad, mom and stepdad that he was going to start going to amateur rodeos — in fact, he had his entire summer planned out. That year, as a freshman, he racked up enough points to win state, but as he was was headed for state finals, he landed in the hospital with a broken leg. Four surgeries later, he was heartbroken that he was missing his chance at a state title, but was determined to come back bigger and better.

He sat out the summer as he focused on healing. When school began in the fall, he started attending weight-training classes early in the morning and worked out after school to ensure that his leg was good to go for the upcoming season.

The injury made him stronger inside and out, and was when he finally got back on a bull, that’s when everything began to click, he says.

“Breaking my leg then was the best thing that ever happened to me. At the time I was mad because I wanted the state title," he says, "but it made me take a step back and kind of grow up and mature more as I was healing.”

At the end of his sophomore year, Derek came up with a plan. He talked his mom and stepdad into letting him do an online/homeschool program to finish up his last two years of high school so that he could focus more on his rodeo career. The deal was that he would attend school in the classroom once a week and would do his other work remotely the rest of the week. He spent that year at every amateur rodeo and open bull ride in the Pacific Northwest that he could enter, and he did all this while finishing up his junior and senior years of high school in one year, allowing him to graduate early.

Derek’s end goal at that point was to be able to buy a Professional Bull Riding membership and Professional Cowboy Association membership to enter the PBR circuit by his 18th birthday — and he did just that. Not even a week later, he entered his first PBR in Wharton, Texas. He made the 33-hour drive by himself and even hit a few other pro and PBR rodeos in Texas before heading back up to South Dakota for one final rodeo on his way home.

“I don’t think I won a dime over that whole trip, but it was definitely an experience. It was a tiring couple of weeks but the last thing I was thinking by the end of it was that this life wasn’t for me,” he says.

By Derek’s second year, he had won four rodeos in a row in the touring pros circuit. This not only bumped him into the top 35 riders in the world, but it also landed him a spot in his first PBR World Finals at the age of 19, where he finished 17th. Then, in 2017, after competing in the Elite Tour all year, he placed second in the world. That may sound like a huge accomplishment, but it only fanned his ambition.

“Nothing makes you work harder or want to strive to keep going further than finishing second,” he says.

2018 brought an early-season injury, and another later in the season, but Derek managed to come in 11th overall for the year and snagged third place at World Finals. But the most important part of 2018? He married his wife Aymie in December at the Walla Walla Fairgrounds.

“My wife and I travel all over the country and even were able to go to Sydney, Australia for a bull riding competition at one point. These are memories we will have for a lifetime. She can be in the truck with me for hours on end (and I mean hours) and still be ready to go to the next event! When she isn’t running down the road with me, she is in the classroom being an elementary school teacher. And on top of that she still finds the time to run her own boutique, 'The Fringed Teepee,'" he says.

So what’s Derek got planned for the future? I can guarantee it’ll involve bulls, rodeos, the love of his life, and good old-fashioned hard work.

“No one is going to give you a damn thing in this world," he says. "If you want something more than anything, you have to find a way to get it. And working harder then anyone else to achieve what you want is a good place to start.”

In the spirit of the eight seconds that riders try to stay on the back of a bull, I asked Ellensburg local professional bull rider, Cody Loomis (Derek’s brother- in-law) eight questions about his life, his family and his passions. Here are the facts from that interview.

• 13: The age that Cody started riding in the NPRA (Amateur Circuit).

• 19: The age that Cody bought his PBR card and began riding in the PBR Touring Pros Circuit.

• 19-22: The age range that Cody rode bulls full time, traveling all over the Southwest and Pacific Northwest.

• Blue Stone School: Where he stopped on the way to a rodeo, and met his future wife while getting a haircut from her.

• 2: The number of years he took off from riding while he helped his wife raise their son, Tilden.

• 2019: His comeback year — He’ll be riding in as many rodeos as he can this summer, but this time, he’ll have his wife and son by his side.