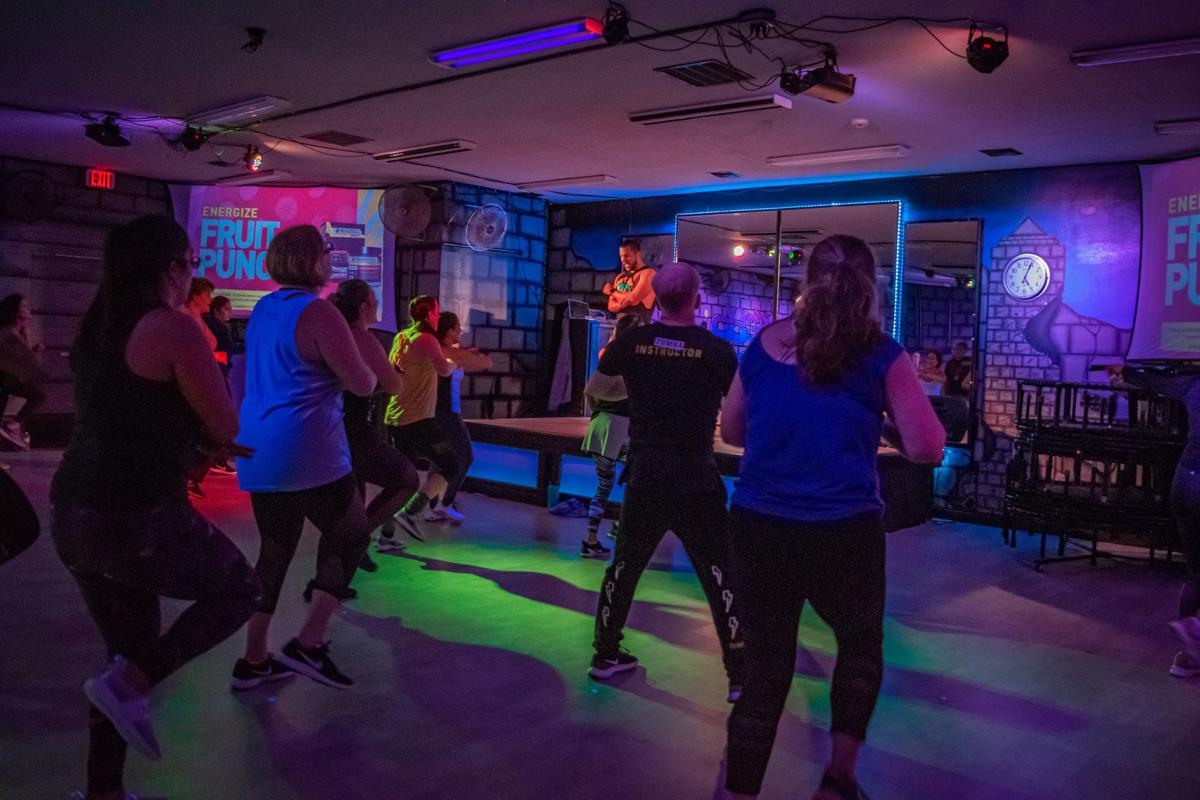 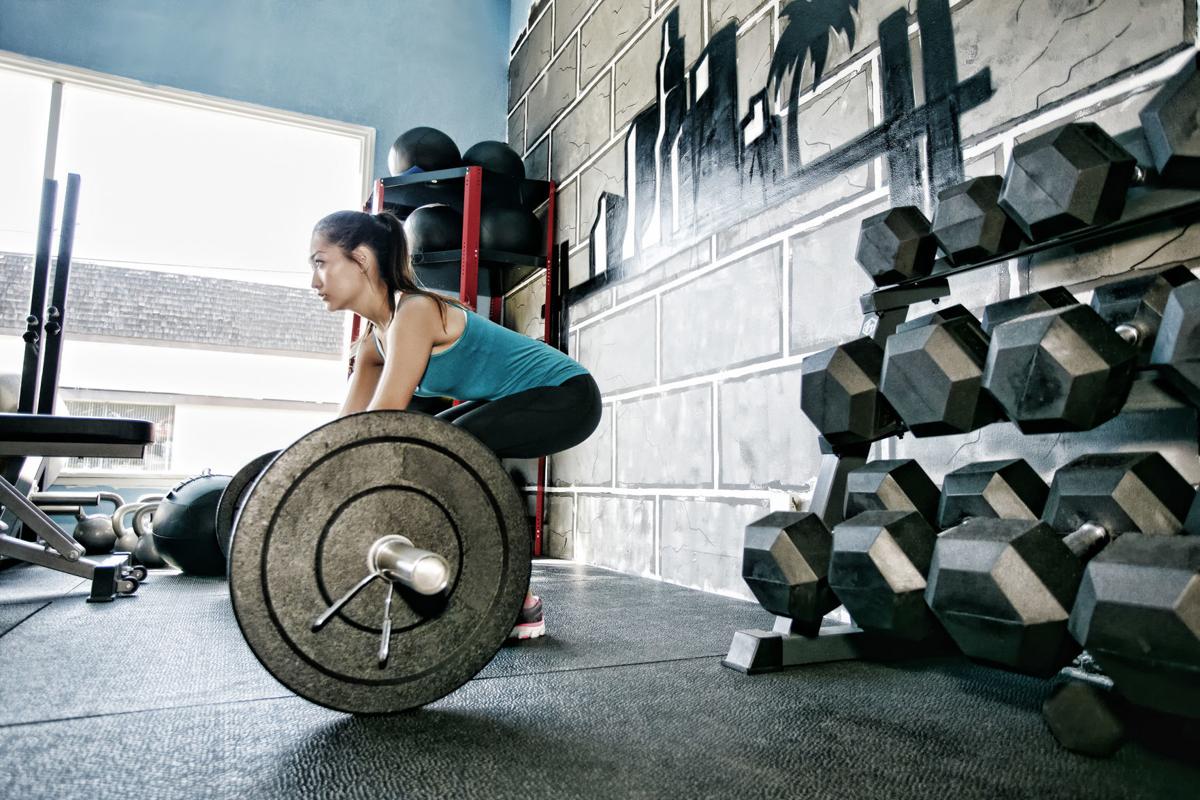 Traditional weight lifting can be intimidating with so many different types of weights and movements. 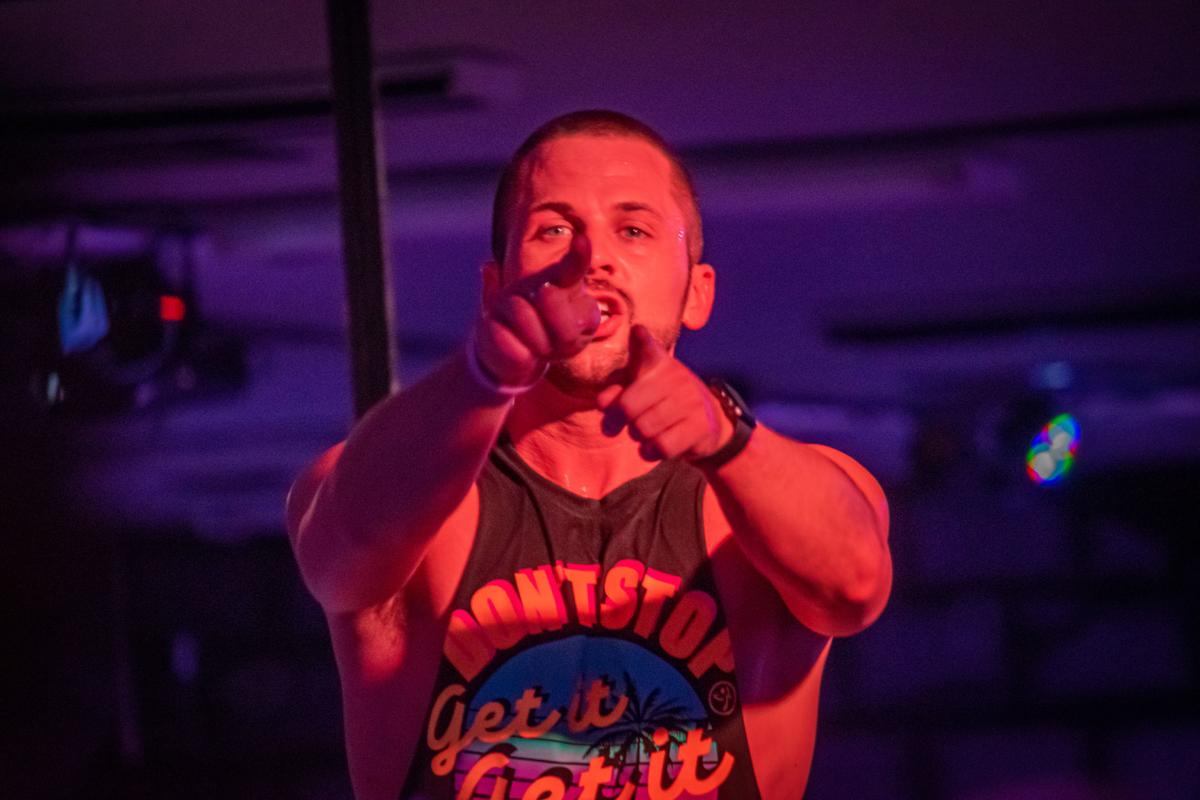 Nathan started out by taking Zumba classes at the YMCA in Yakima. Soon, he ended up teaching the classes himself. 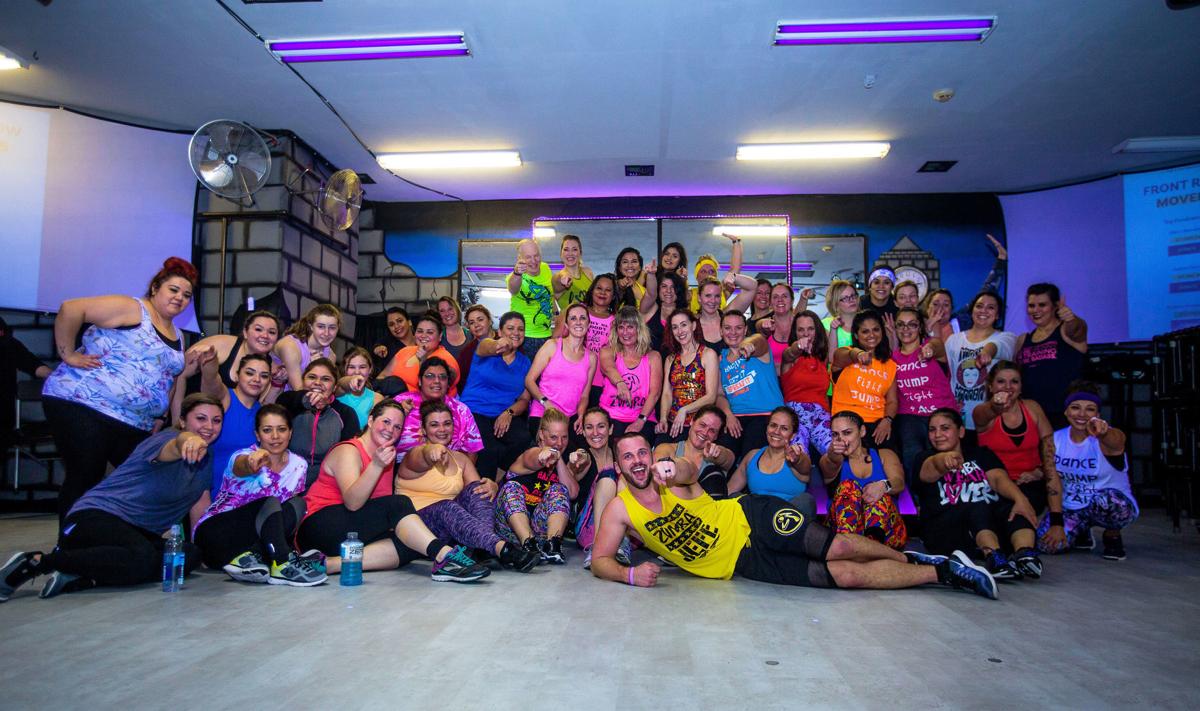 Clients celebrate the grand reopening of Fitness with Nathan & Associates after its 2019 remodel. 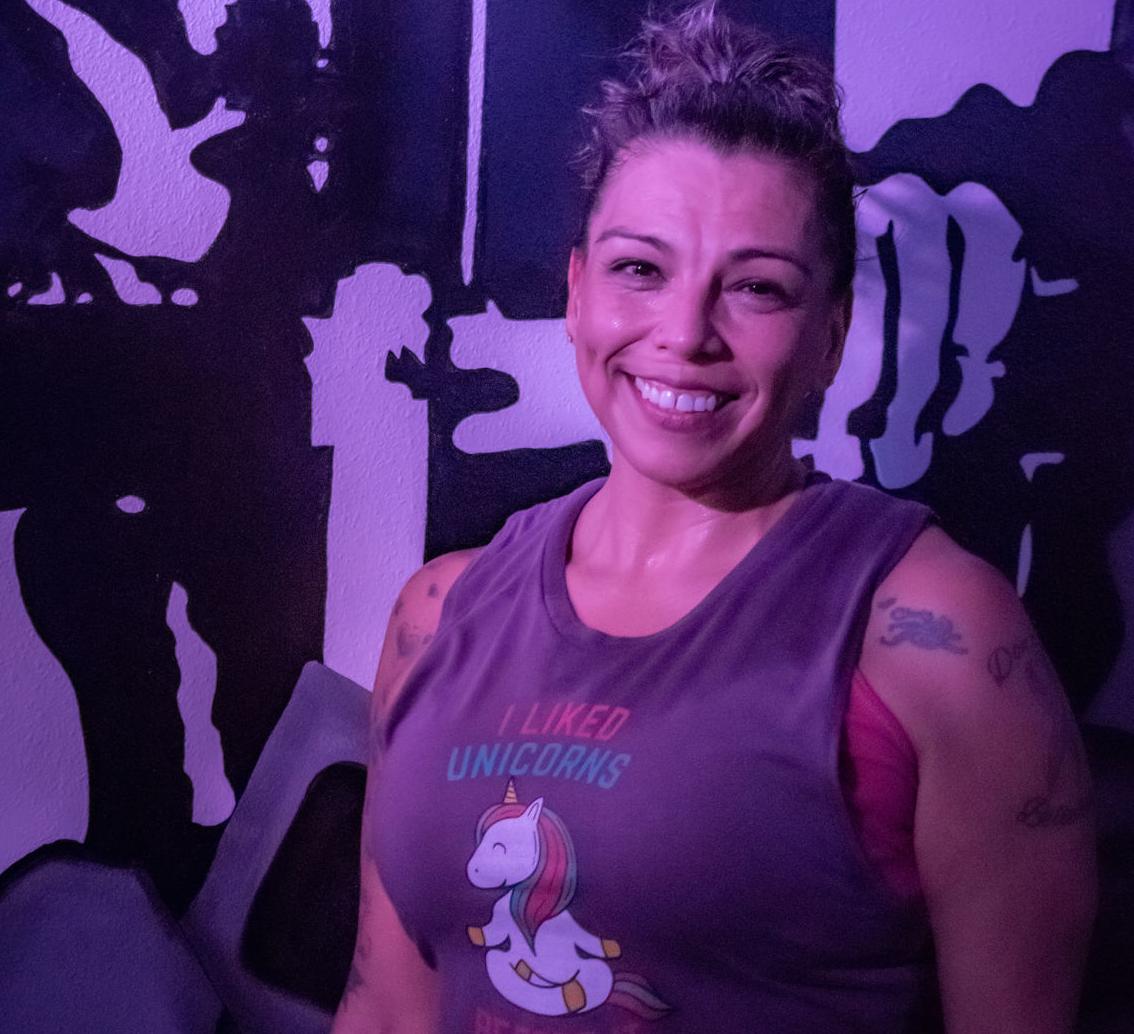 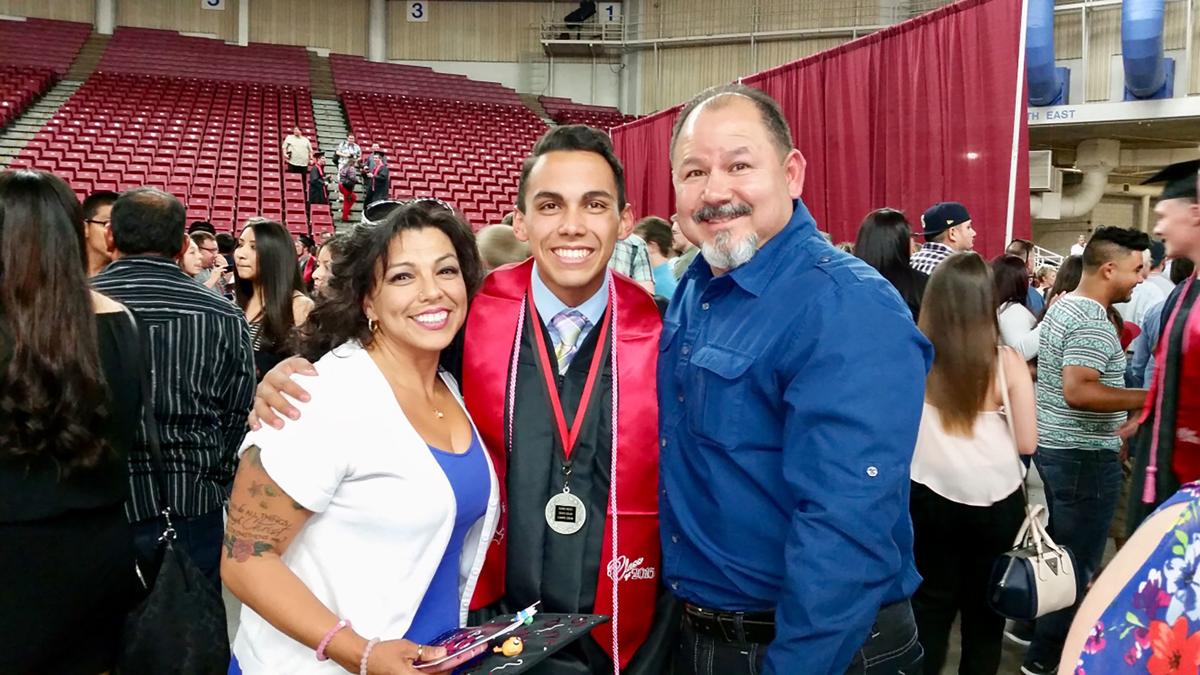 This 'before' picture shows Mattie and her husband, Bobby, at their son Stefan's East Valley High School graduation in 2016. She's lost 50 pounds since she started. 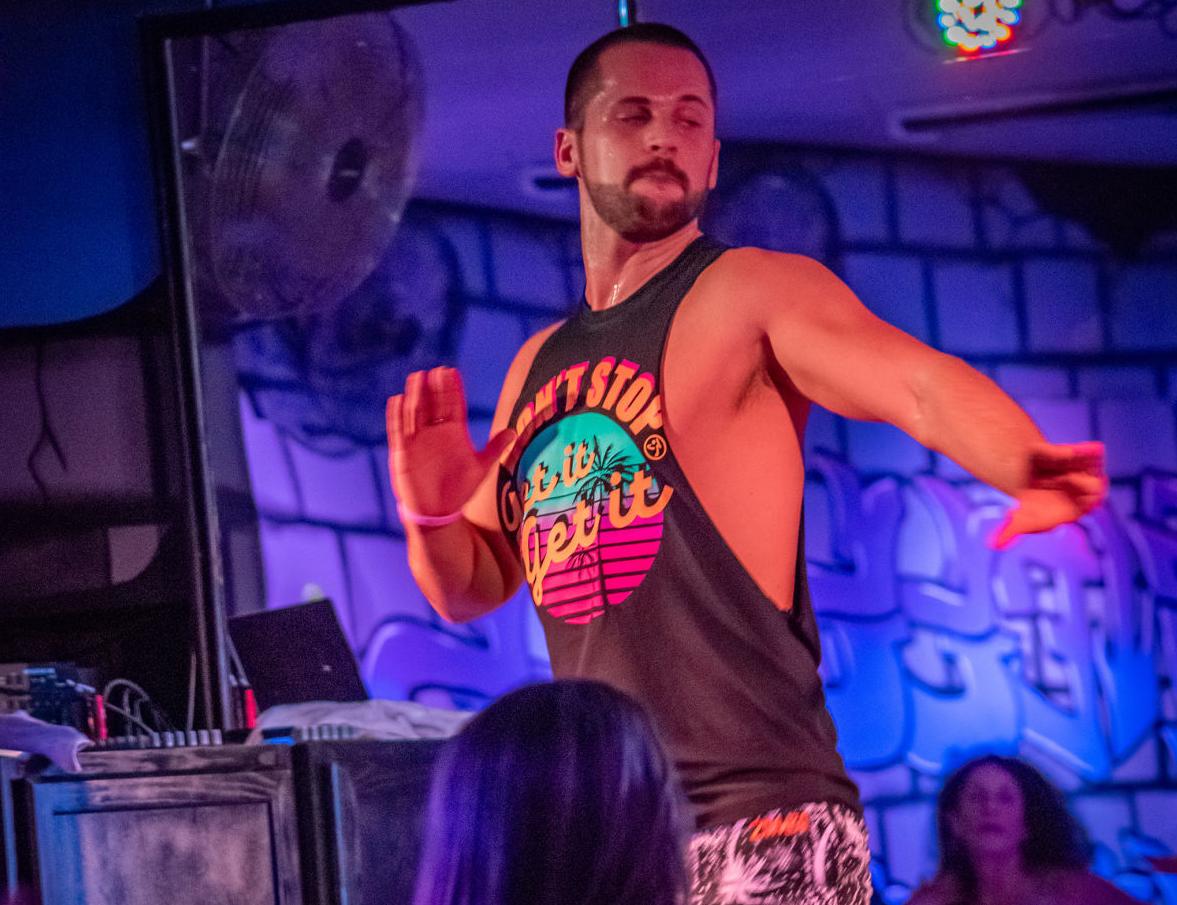 Nathan says you can burn up to 800 calories during a Zumba session.

Traditional weight lifting can be intimidating with so many different types of weights and movements.

Nathan started out by taking Zumba classes at the YMCA in Yakima. Soon, he ended up teaching the classes himself.

Clients celebrate the grand reopening of Fitness with Nathan & Associates after its 2019 remodel.

This 'before' picture shows Mattie and her husband, Bobby, at their son Stefan's East Valley High School graduation in 2016. She's lost 50 pounds since she started.

Nathan says you can burn up to 800 calories during a Zumba session.

For many people, just making their way to the gym can be an arduous task. And once they get there, it can be difficult to know which machines are right for them and what type of weights to use. There can certainly be a learning curve to the fitness world, but one exercise option has made it much more approachable to anyone looking to get fit — Zumba.

Zumba originated in Colombia when an aerobics class instructor, Alberto Perez, forgot his usual music for class and substituted with Latin music. The class was an immediate hit, and Perez decided to move to the U.S., continuing to teach along the way. Perez eventually teamed up with 25-year-old Alberto Perlman, who wanted to bring Zumba to the masses, and the dance-fitness craze has continued to grow in popularity ever since.

“The biggest surge happened around 2011 and 2012 when the first video game came out for it,” said Nathan Vanderhoof, owner of Fitness with Nathan & Associates in Terrace Heights. “It hasn’t lost steam since. It’s been keeping up with the times, expanding the music choices, and now Zumba is in over 150 countries.”

In essence, Zumba is dance fitness, with a Latin-inspired twist, incorporating a variety of world rhythms. And according to Vanderhoof, who teaches several types of Zumba classes at his studio, it all comes down to the differences in the music.

“If you go to a Zumba class, you won’t hear from pop radio. It’s a journey around the world with rhythms from a variety of countries,” he said. “The genres of music are what makes it different from the regular hip-hop or jazz dance classes.”

In order for a class to truly be considered Zumba, the instructors must be licensed to teach the class and to use the Zumba logo and brand. “You become a part of the network,” said Vanderhoof. “You can’t call it Zumba without learning how to teach it and a license to teach. Otherwise, it’s just dance fitness.”

Vanderhoof’s journey with Zumba began serendipitously at the YMCA in Yakima. He had begun taking classes with a goal to lose weight, ultimately shedding 60 pounds with Zumba.

“I was going to all types of classes and fell in love with Zumba,” he said. “I had been a dancer all my life, so it was natural for me.”

Coincidentally, the instructor at the time needed to leave town and miss a few classes, and because Vanderhoof had done so well in the class, he was asked to step in and teach. “I ended up teaching the class and I absolutely loved it. I took the training right after and I’ve been licensed ever since,” he said.

Vanderhoof has been teaching for 10 years now, with a portion of his time spent at the YMCA before deciding to open his own fitness studio in 2014. Just as many others have, Vanderhoof caught the Zumba bug, turned it into a thriving business and never looked back.

Zumba is meant for all ages, skill levels and genders, though Vanderhoof requests that those attending his classes are age 13 and up.

“Zumba really is for anyone, of all fitness levels,” he said. “You can have someone really athletic who comes and gives it their all and burns 800 calories or someone with knee problems who takes it a bit slower that day but still gets a good workout. It’s an eclectic group.”

During a typical Zumba class, the instructor doesn’t normally speak. The tunes are cranked, with the instructor on the stage in front of the class, and it’s all about following along. An instructor won’t tell you what to do throughout the class, allowing class members to move at their own pace.

“There’s really no rules, and nobody will look at you funny if you go the wrong way. Nobody will care if you take a break,” he said. “It’s simple, basic movements and you just follow the moves and have fun. All I want people to do is have a good time.”

According to Vanderhoof, classes are typically 55 or 60 minutes long, depending on the instructor and location, and it truly is a good workout.

“The exertion is more than you think,” he said. “We know we’re going for a workout but almost nothing about it feels like a workout.”

For Mattie Panatex, 50, Zumba transformed her life. She took her first Zumba class in 2011, and she’s been going back every week for eight years.

“I needed to lose weight. I kept passing by the sign in Terrace Heights, and told myself I would eventually go in there,” she said. “I bit the bullet and joined, and after that it was so easy. It made it fun and everyone was so energized. It’s like working out with my family.”

Panatex lost 50 pounds by dancing with Zumba, and she’s kept it off since then because of the ease of the exercise.

“Mentally it’s been so great for me too. You just dance, and you leave everything at the door,” she said. “Everyone helps each other through it, and now my husband has joined as well, and we’re able to push each other further.”

And according to Vanderhoof, that’s exactly the type of environment he’s worked hard to provide. People have created their own culture and made friends they may not have made if they hadn’t taken his Zumba classes. It’s much more than just a workout.

“It’s a social hour and it’s a dance hour, and you get the extra benefit of getting a great workout,” he said. “It really is just like going to a dance party. You dance, and then you leave. It’s like exercise in disguise.”