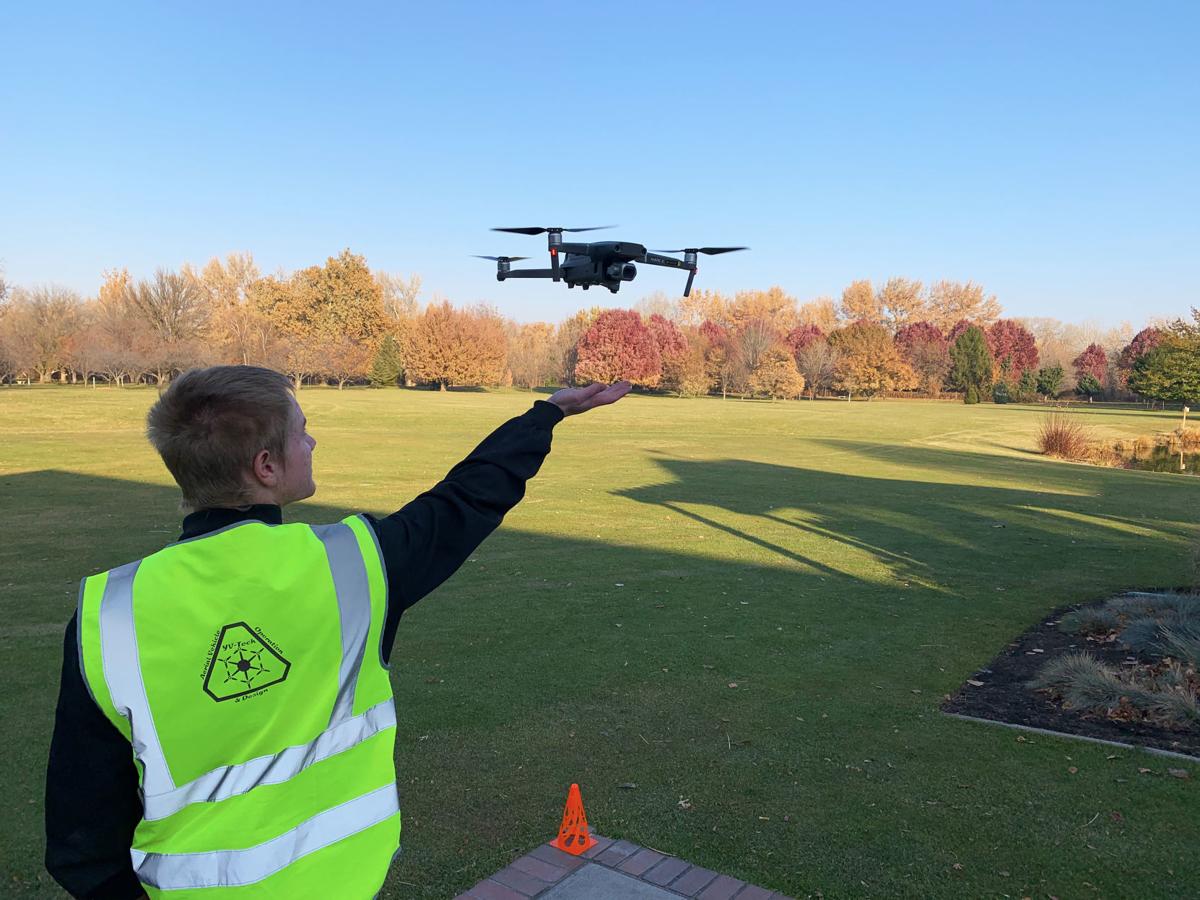 Student Daniel Shipley waits for the drone, which will land gently onto his outstretched hand. 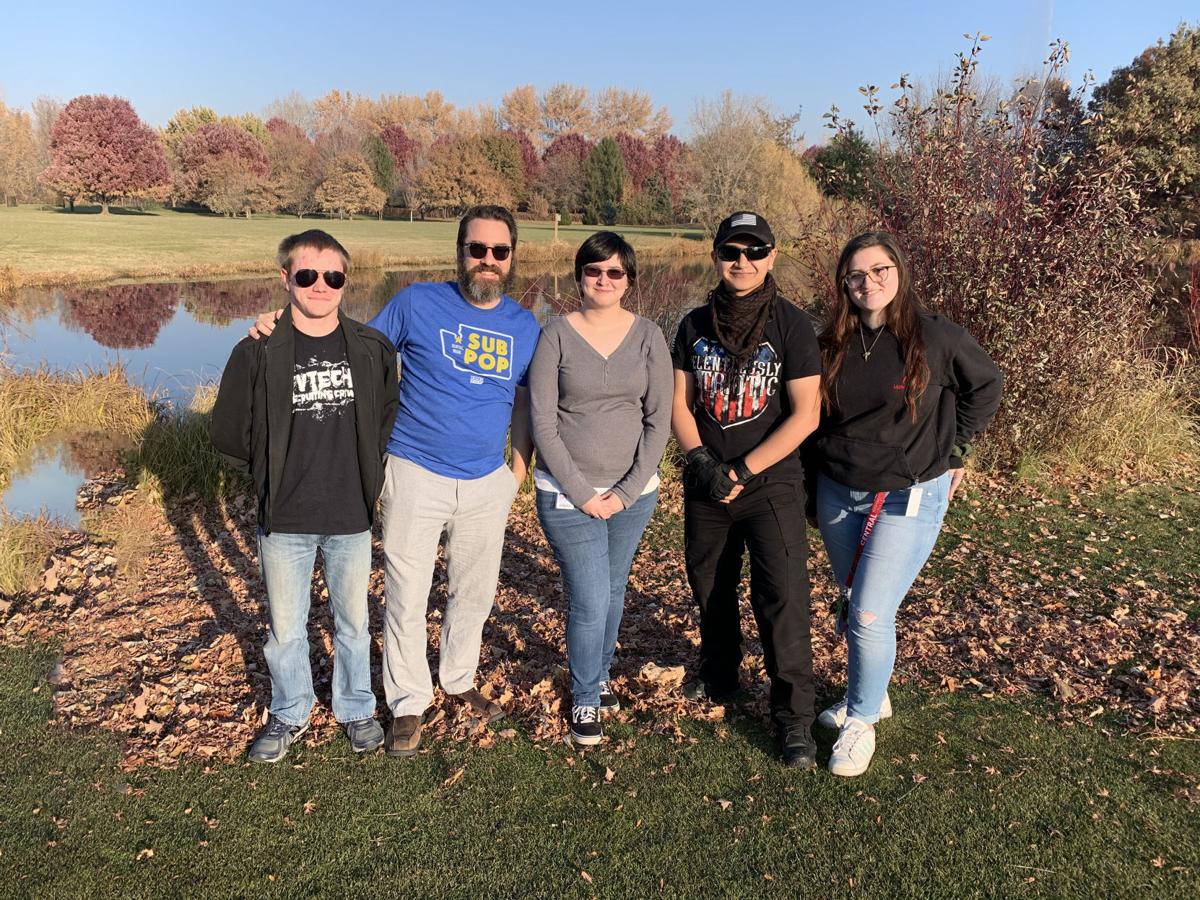 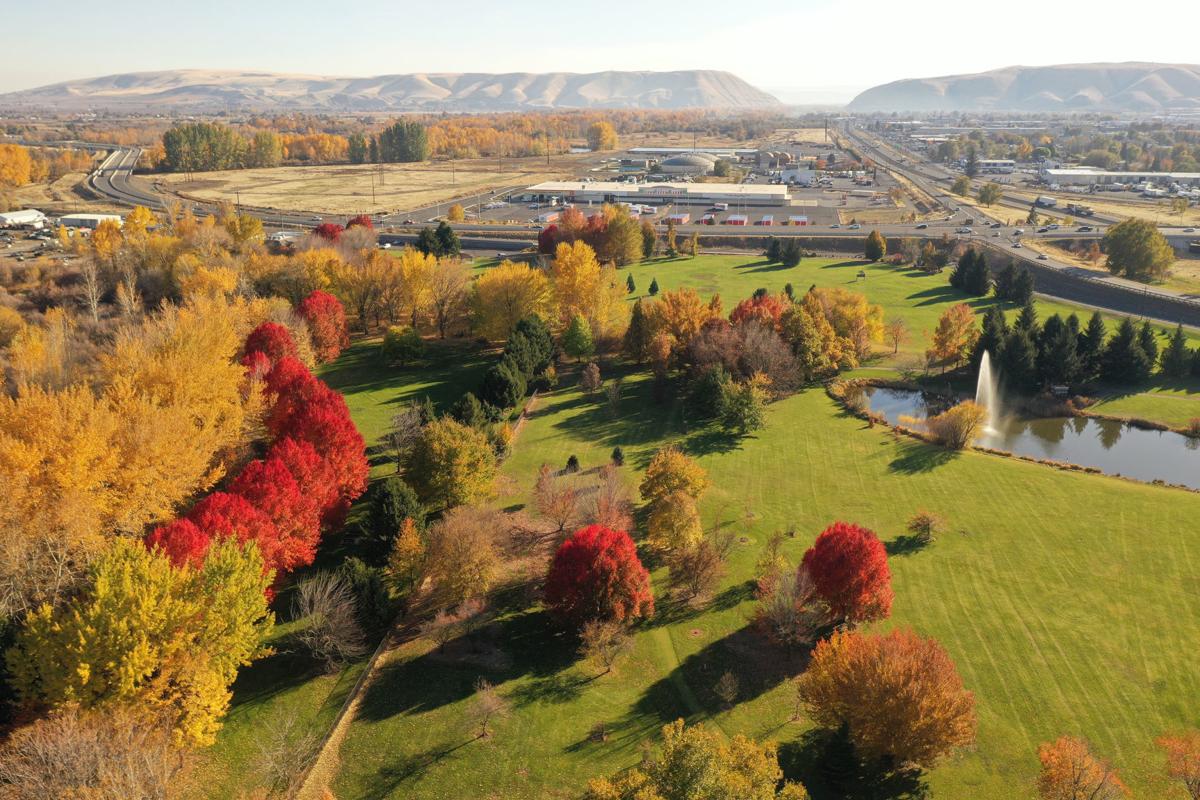 McKayla Kroll took this aerial shot of the Arboretum in all its fall glory. You can see the Union Gap in the background. 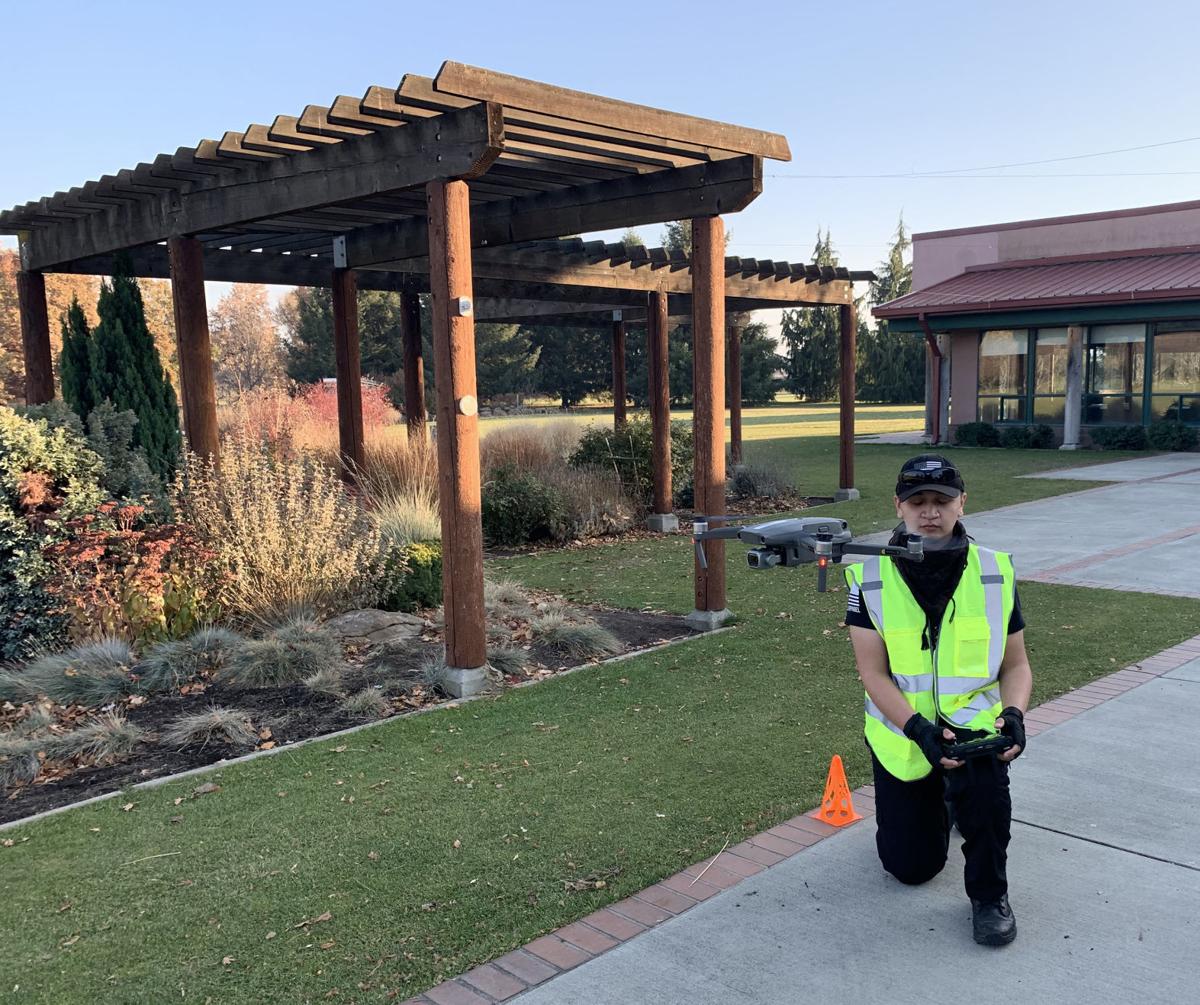 Francis Ballinger launches the drone. It has a range of three miles and is programmed to automatically return to the launch point after a flight, except in special situations — for example, if you launch it from a moving boat. 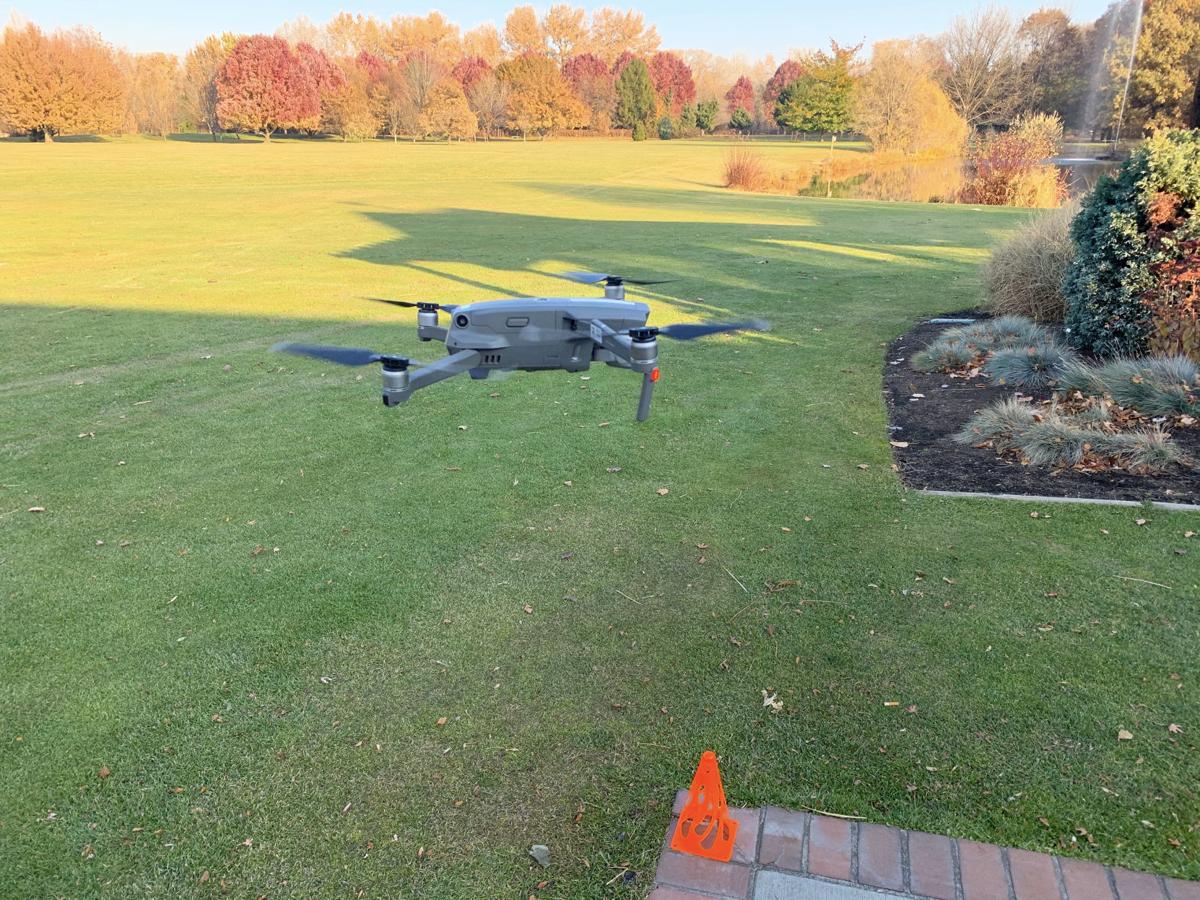 Drones can be used in search and rescue or package delivery. In Africa, they're being used to deliver samples from rural medical clinics to labs. 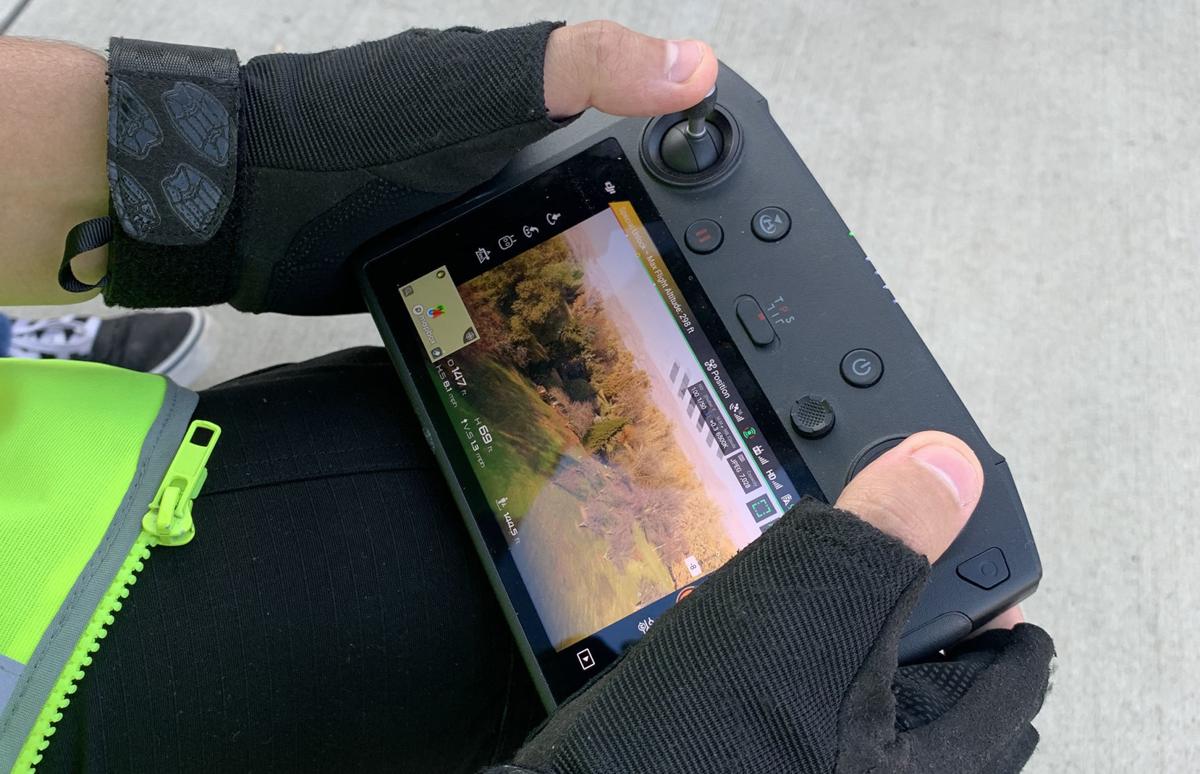 The controller is kind of like the joystick on a video game. 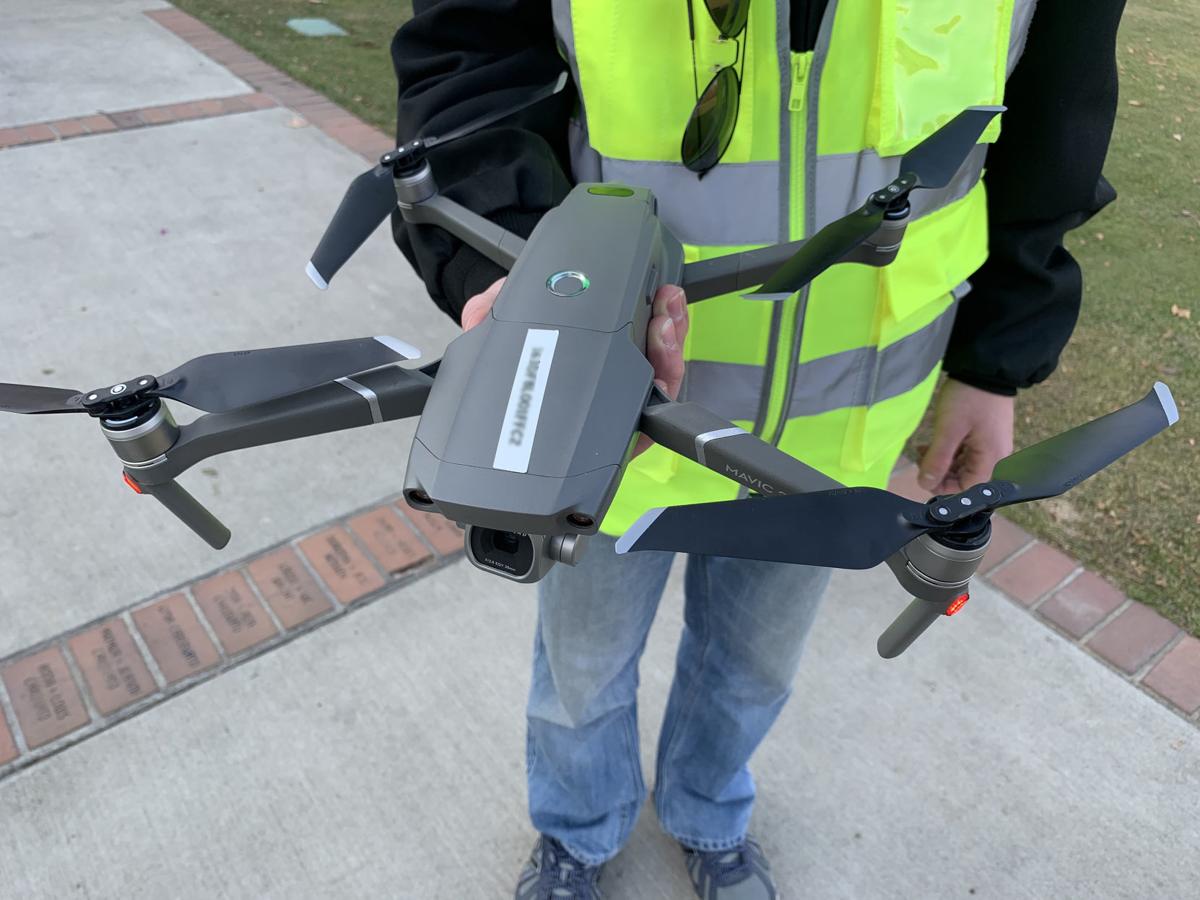 This DJI drone runs about $2,500 with bells and whistles. The FAA has strict rules about how, where and when people can fly them.

Student Daniel Shipley waits for the drone, which will land gently onto his outstretched hand.

McKayla Kroll took this aerial shot of the Arboretum in all its fall glory. You can see the Union Gap in the background.

Francis Ballinger launches the drone. It has a range of three miles and is programmed to automatically return to the launch point after a flight, except in special situations — for example, if you launch it from a moving boat.

Drones can be used in search and rescue or package delivery. In Africa, they're being used to deliver samples from rural medical clinics to labs.

The controller is kind of like the joystick on a video game.

This DJI drone runs about $2,500 with bells and whistles. The FAA has strict rules about how, where and when people can fly them.

Dear Santa Claus: If you are leaving a drone under the Christmas tree this year, please include a copy of the Federal Aviation Administration’s Reauthorization Act of 2018 as well.

That federal law, which explains how, when and where people can fly drones as well as the consequences for improper use, is just as important as the instructions for how to operate one.

Drones, also called unmanned aerial vehicles (UAV) or unmanned aircraft systems (UAS), are basically flying robots. They have recently grown in popularity and we see footage daily that is shot by drones large and small. In the Yakima region, those wishing to learn to fly or even to make drones have a couple of options available.

For high school juniors or seniors, Yakima Valley Technical Skills Center offers aerial systems operation and design. The course, taught by Clem See, is described as an introduction to drones and robotic automation. But it is producing students who can use 3D printers, build working drones and produce commercial-quality photos and video. They learn and follow the laws and regulations for hobby and professional UAS usage.

“Unmanned air, ground and water vehicles can be used to solve lots of different types of problems,” See said. His students design and maintain 2D and 3D vehicles and often earn their remote pilot’s certificate within months of beginning the nine-month long program, which then allows them to fly drones in commercial settings.

Under the tutelage of See, a former mechanical engineer with Thermal Forming Systems, students begin applying flying skills as soon as class starts in the fall.

“We want to stay off the toes of those folks who are earning money with this work,” See said, “but for our students the opportunity to work in agriculture or other settings is very valuable.” Recent projects include shooting promotional footage for the local office of Hopsteiner, a global hop supplier, and still and video photography of the Fresh Hop Ale Festival in downtown Yakima.

Francis Ballinger and McKayla Kroll are in their first year of the aerial systems class. They volunteered to help See with the ale festival, which presented unique challenges.

“You can’t fly over people in the open so it can be difficult to take photos with decent angles,” Kroll said. The East Valley High senior explained that the festival’s proximity to the restricted air space around the county jail figured in to their flight plan as well.

“The stage was covered so we could pass over that,” Kroll said. The pair helped operate two controllers, one to fly the drone and one to take video and photos.

Ballinger and Kroll also filmed the Yakima Taco Fest at Sarg Hubbard Park and the entire class worked drone coverage for the 10 days of the Central Washington State Fair.

The students enrolled in the aerial systems class have a variety of goals. Ballinger, who works as a security guard at the Union Gap Corn Maze and Pumpkin Patch during the fall , would like to enter the surveillance and security section of the search-and-rescue field, perhaps with a sheriff’s department or border patrol.

Kroll plans to earn her license to fly to become a drone photographer using multiple types of media.

Seventeen-year-old Daniel Shipley is a second-year student in See’s class and serves as the 3D printer technician. He helps train other students in their use, which includes making drones. The home-schooler would like to be a commercial photographer and recently completed a job shadow at a local news station.

Also in his second year, Ramiro Huerta would like to build planes. Last year, a drone he built with another student earned second place at the drone challenge during the annual SkillsUSA Washington State Leadership Conference & Skills Championships in Yakima.

“It took about a month and a half to build because I had some difficulties fitting the guts in one place but it worked out in the end,” Huerta said. The West Valley High senior said the assignment was to build a fast and durable drone and the class continues to use some of the units from the competition.

As See explains upcoming projects, the discussion includes weather forecasts, times for sunrise and sunset, shadows and shading, and what foot traffic can be expected at a location. With those variables at play, students are asked to be ready to show up when conditions are right. That could be near sunrise on a Saturday or after school on a Monday.

Mabel Chervany attends YV Tech full time. The 17-year-old is also enrolled in the school’s entertainment media production class. Chervany spent several weeks editing footage See had shot of a wedding held at Mighty Tieton this fall. According to See, the beautiful video is an example of work students can offer to companies looking for promotional material. Chervany plans to pursue art design and theater degrees at Central Washington University and work for a movie production studio.

For newcomers, currently enrolled college-age students, or even folks already in the field, Yakima Valley College offers a UAS course aimed at awarding certification in the subject. The new course started this fall and currently has a small enrollment. YVC Agriculture Department chairman Trent Ball expects that number to grow given the increased use of drones in areas such as agriculture, real estate, law enforcement, sales and advertising, and manufacturing.

“Our advisory board has been discussing this program for quite some time,” Ball said. “The timing was just right to launch it now.” That timing included a partnership with Big Bend Community College in Moses Lake that made the UAS classes possible.

BBCC was awarded a National Science Foundation grant and required to identify partners across the state. Through that grant, YVC is able to offer online courses that are taught primarily by BBCC staff.

Along with online courses, which include ground school, mission planning, and remote pilot license classes, students will also complete a flight lab. Completing the course and earning a certificate in UAS requires 24-28 credits, depending on the area of emphasis and selection of additional classes. The credits may also apply to related associate degree programs.

YVC’s tuition is approximately $125 per credit plus lab class fees. Ball pointed out that the program is designed so those already working in an industry could take a few classes without the expectation of having to complete the certification process.

“The drones were developed and available before the laws were written and clear. There are now written laws regarding drone use and everyone may not know that,” Ball said. “They are regulated by the FAA and you legally need to know how to fly safely. Our program provides that information about policies and how to make safe decisions.

“For example, a great candidate for our program might be a current employee who is then able to use their training to help a grower or irrigation district scout a field or block through remote sensing or gather data for precision agriculture.”

Recreational flying is popular as well, and there is a group dedicated to just that. The Yakima Drone Club’s mission is “to bring UAV and droning to the community.” The club meets regularly and information is available on its Facebook page. According to YV Tech’s See, the hobbyist flight group is a good resource for information. He also encourages anyone thinking about buying a drone to contact him at See.Clements@yakimaschools.org.

“We can help with gift ideas as well as information about the best deals and best vehicles,” he said.

Sounds like good advice this holiday season — that and maybe keeping an eye on what might be flying down the chimney.