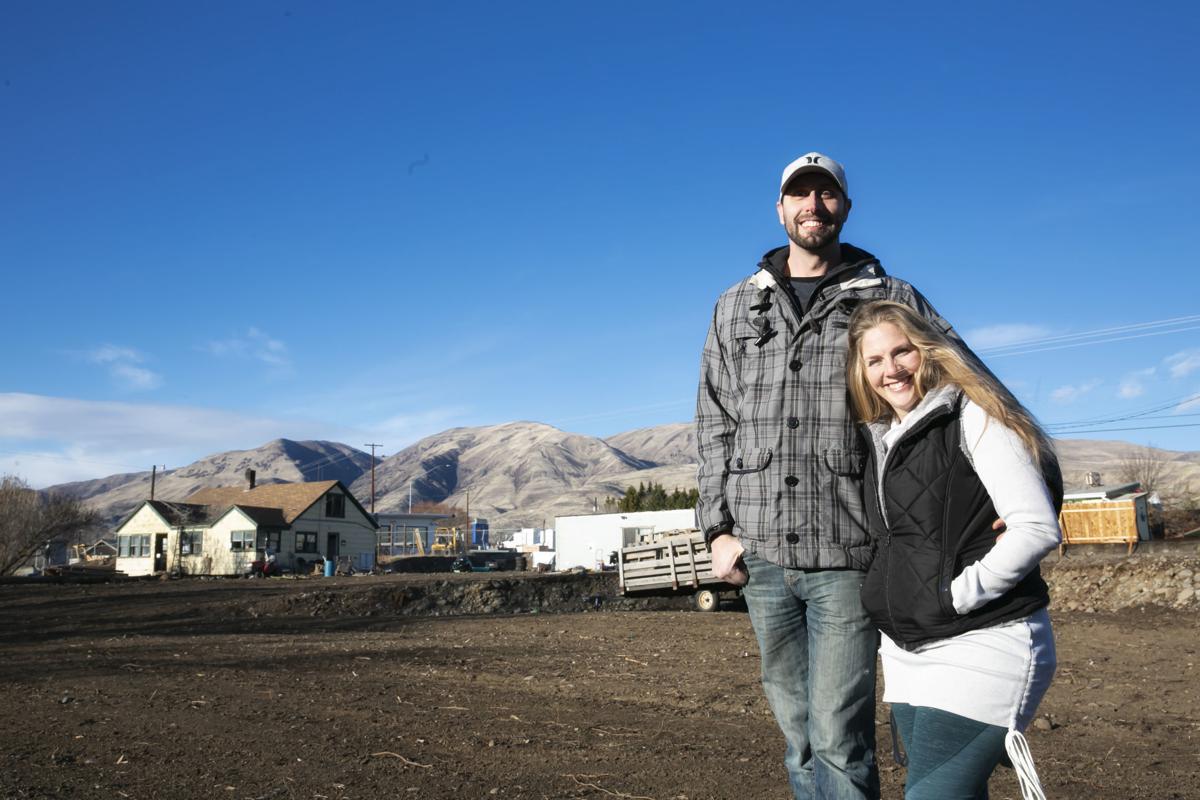 Tori and David Dede stand behind Highway Espresso in Naches. They plan to turn the little yellow house on the left into a cafe and performance space. 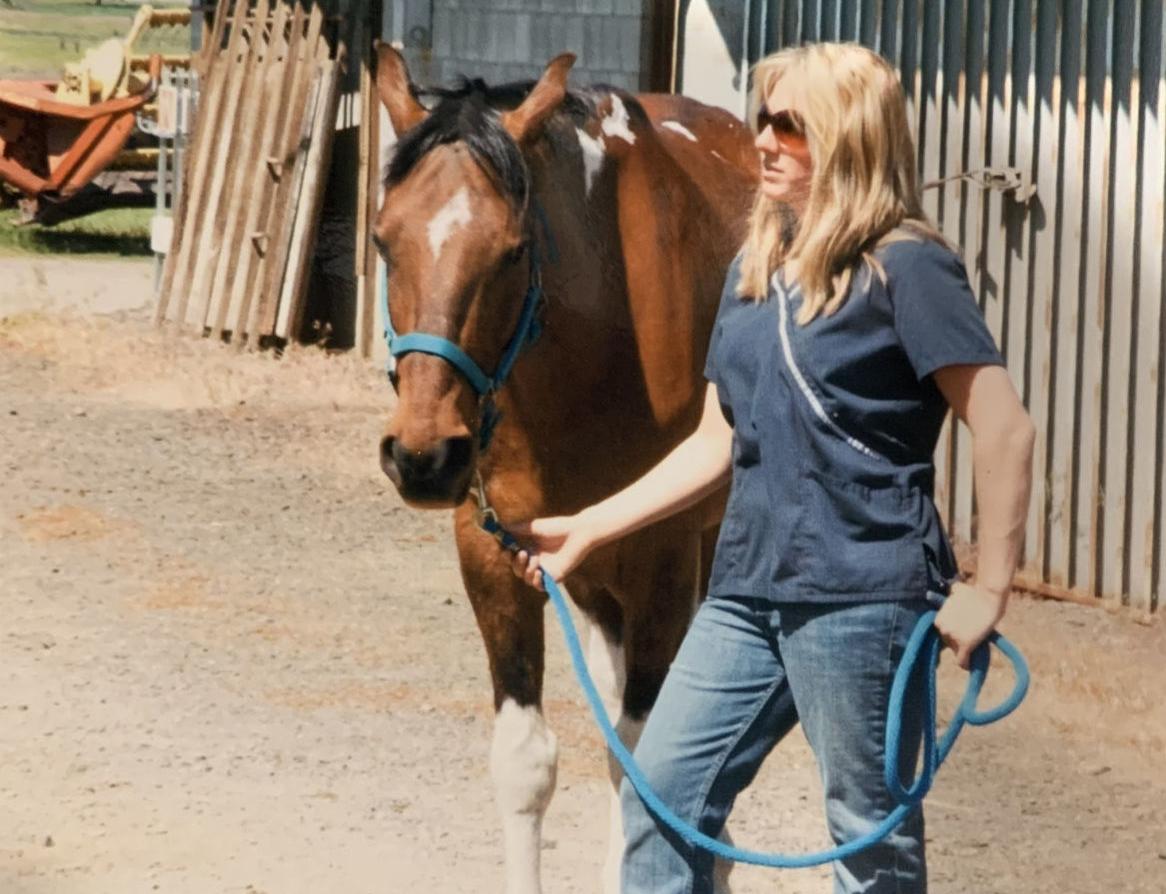 Tori's dream was to become a veterinarian. Before she bought Highway Espresso, she worked at the Yakima Pet Emergency Clinic and the Tieton Drive Animal Clinic. 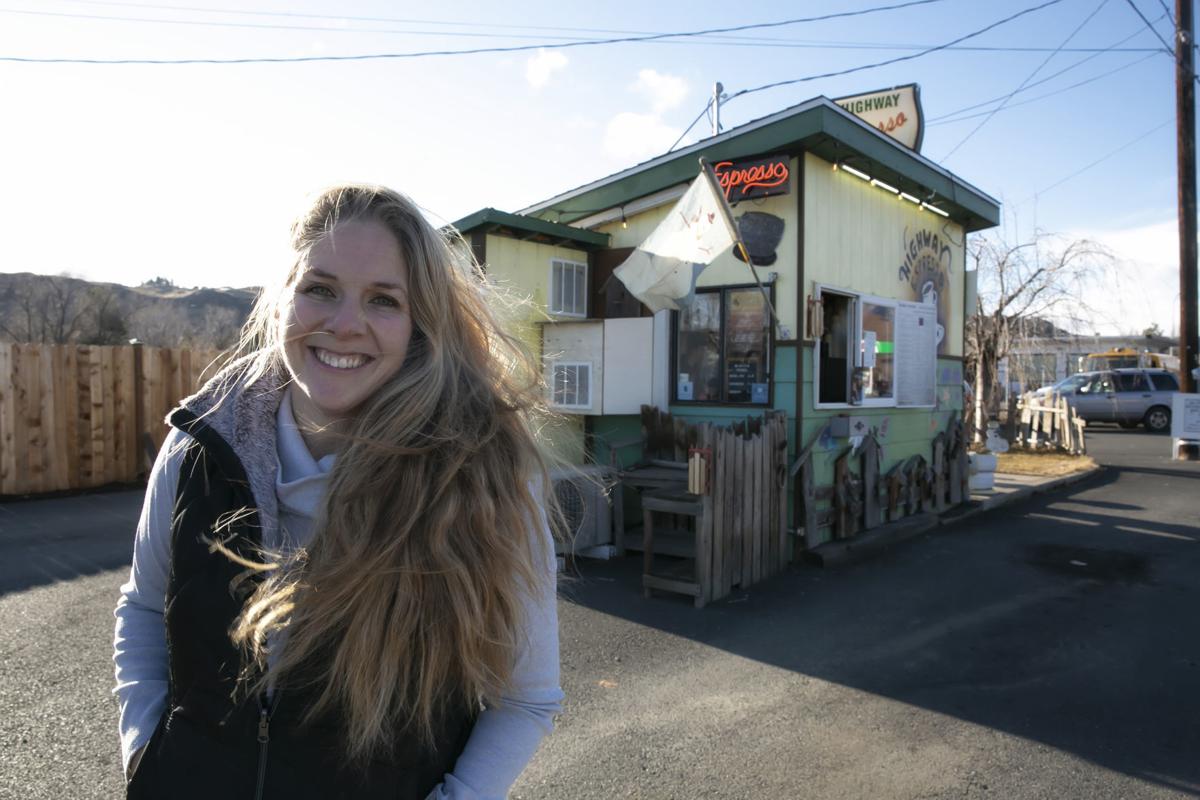 Tori outside her stand, which is on the south side of Highway 12 near the light in Naches. 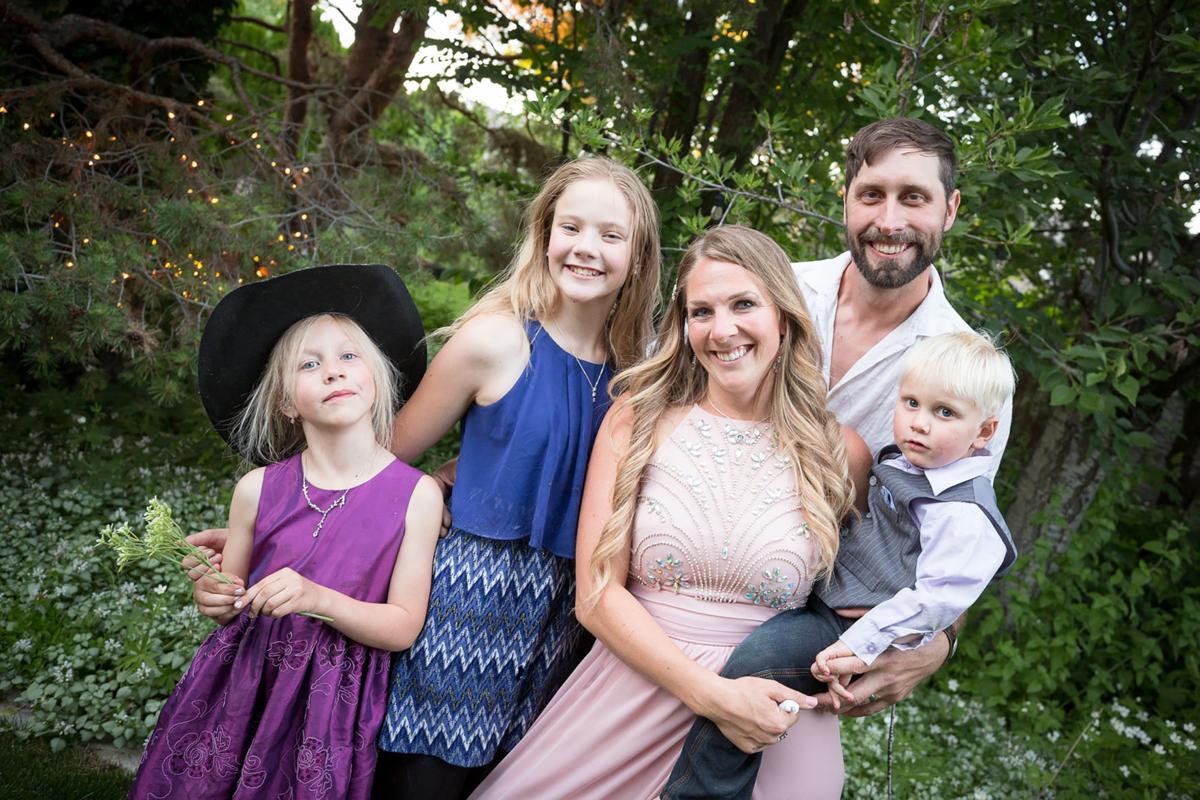 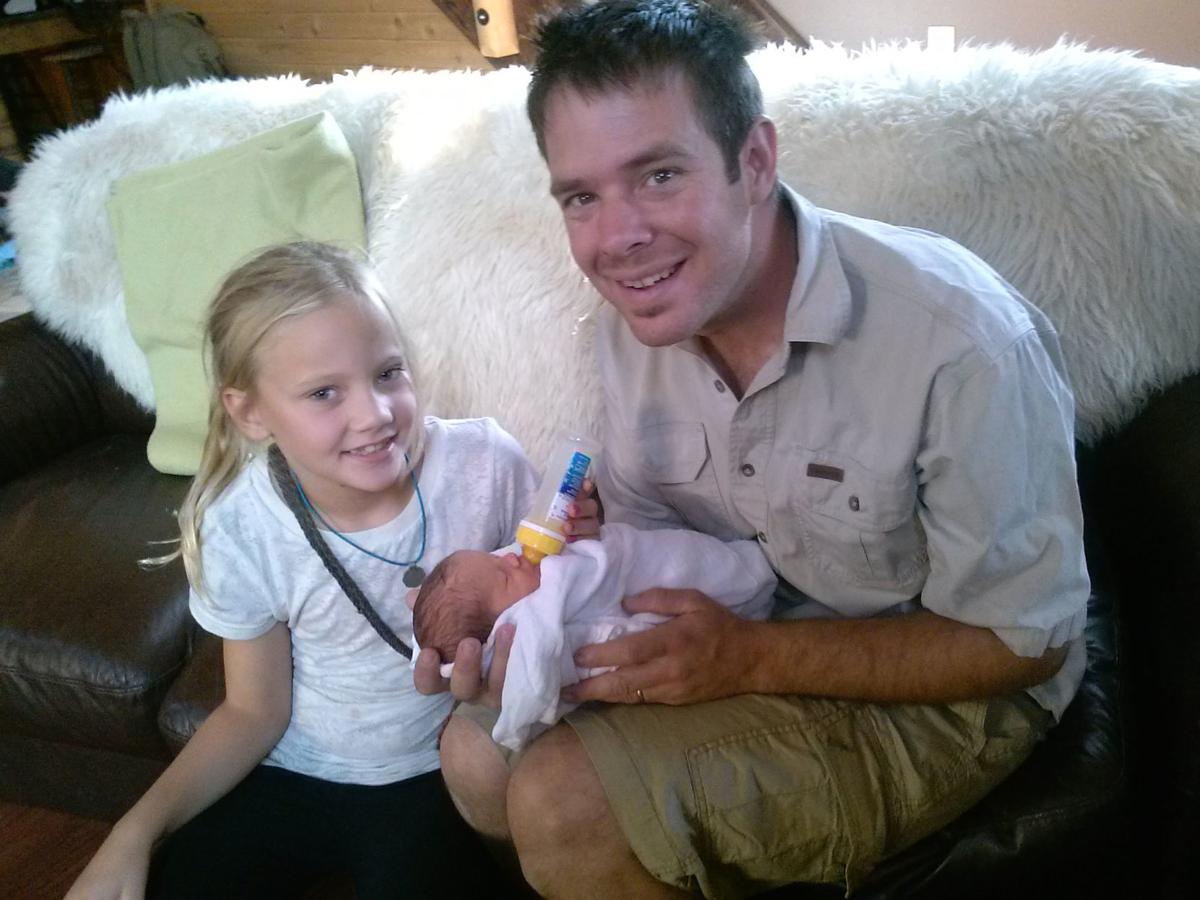 George Razey holds his newborn daughter, Petra, in 2015. Tori Dede served as a surrogate for the baby and her twin brother. 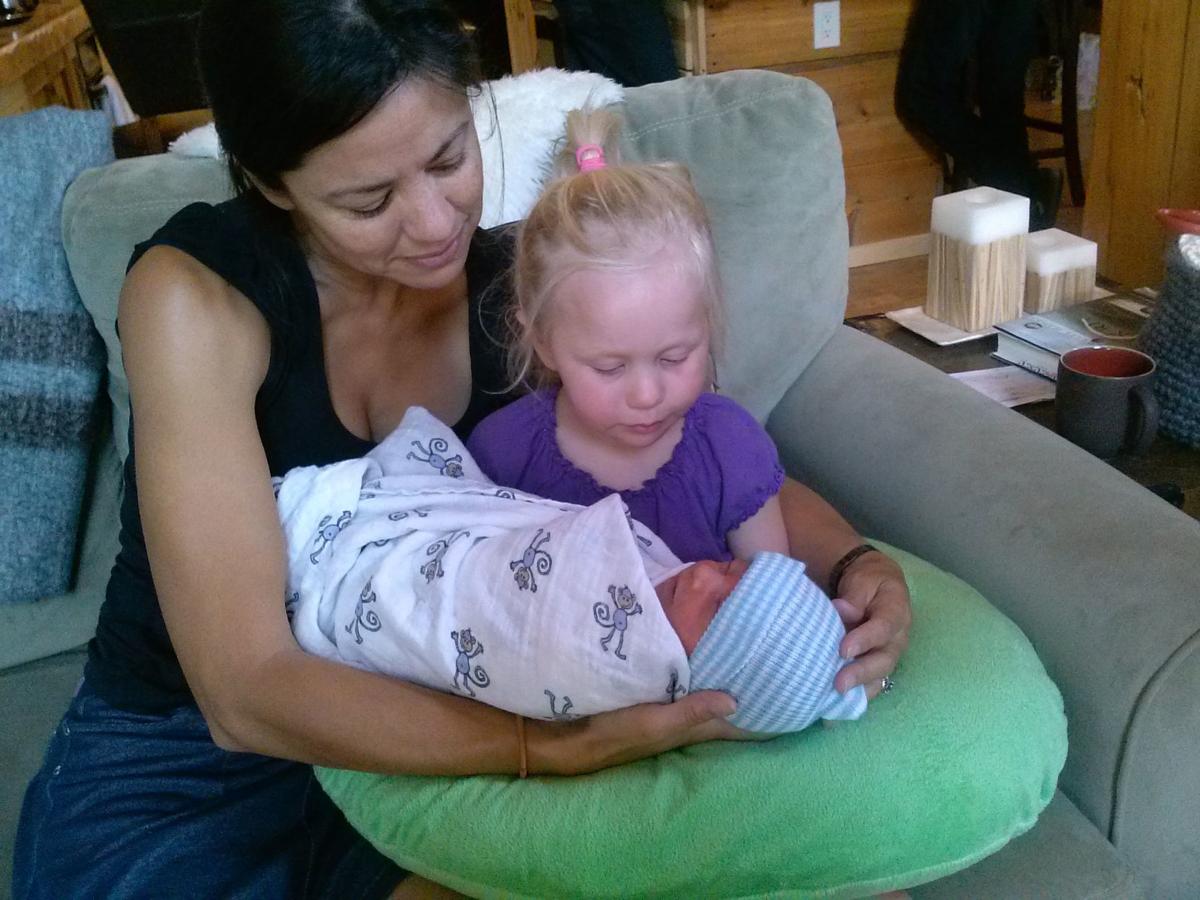 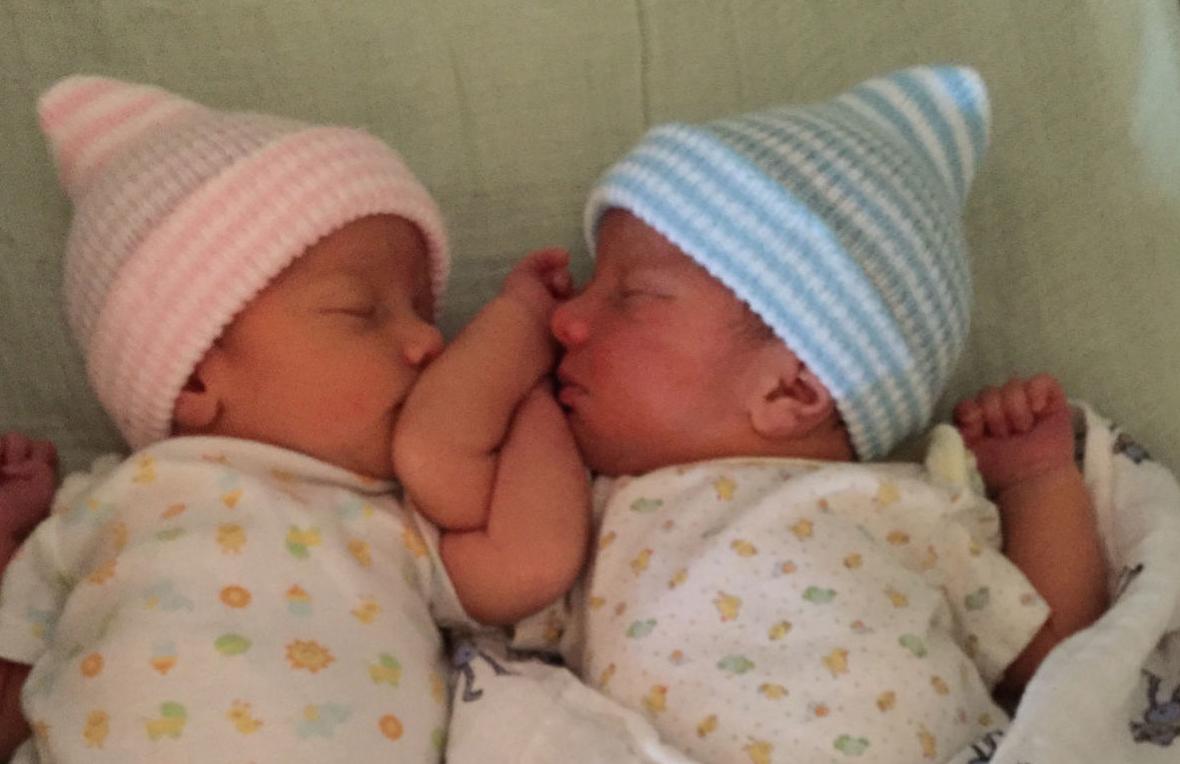 Petra and Henry were implanted as embryos into Tori's womb and emerged, healthy and happy, 37 weeks later. That is considered full-term for twins.

Tori and David Dede stand behind Highway Espresso in Naches. They plan to turn the little yellow house on the left into a cafe and performance space.

Tori's dream was to become a veterinarian. Before she bought Highway Espresso, she worked at the Yakima Pet Emergency Clinic and the Tieton Drive Animal Clinic.

Tori outside her stand, which is on the south side of Highway 12 near the light in Naches.

George Razey holds his newborn daughter, Petra, in 2015. Tori Dede served as a surrogate for the baby and her twin brother.

Petra and Henry were implanted as embryos into Tori's womb and emerged, healthy and happy, 37 weeks later. That is considered full-term for twins.

"A winner is a dreamer that never gives up.” — Nelson Mandela

Tori Dede always knew she wanted to help people, but helping animals is something that is just as important to her. So it was no surprise when she graduated from Naches High School and headed off to Washington State University with the goal of becoming a veterinarian.

Then Tori found out she was pregnant. After her daughter Codi was born in November 2007, Tori finished her second year of college. Then she put her dream of getting a degree in veterinary medicine on hold and moved back to Naches, so she could get help from her family in raising Codi.

But becoming a mother didn’t stop her from following her dream of helping animals. After moving home, she applied to the YVCC Veterinary Technician Program and graduated when Codi was 2 ½ years old. For the next few years, Tori worked at Yakima Pet Emergency Clinic and Tieton Drive Animal Clinic, helping pets and their owners while also focusing on what was most important — her beautiful little girl.

In 2008, Tori began working part-time at Highway Espresso. You may have seen the stand on the south side of Highway 12 right before the light in Naches. After getting to know the owners of the stand while working with them, Tori found out that they were interested in selling it. She spoke with her mom, Traci Hauber, about the pros and cons of purchasing the business and decided to take the plunge. Since then, Tori has worked at the stand on and off, helping her mom with the business and connecting with the Naches community.

Fast forward to 2011, when Tori met the love of her life — David Dede. After just three months of dating, David moved to Naches from the West Side, and on Dec. 23, 2012, they were married on the one-year anniversary of their meeting. Now, seven years later, they have added two more kids to their family, Evelyn, (6 ½) and Lochlan, (3 ½), along with Codi, who is now 12.

Now, to help you understand Tori’s desire to help people, we are going to back up a bit, to when Codi was 4 years old, before David was in her life. Tori’s pregnancy with Codi went perfectly, and because of this, she wanted to give someone else that same gift that she was given. She went to Seattle with her mother to a fertility clinic to talk about becoming a surrogate mother.

But even when the doctor told her he couldn’t help her become a surrogate, she held out hope that one day she would be given the chance to make another mother’s dream come true.

In 2014, one of David’s co-workers confided in him that they were interested in having kids through surrogacy. At that point, Tori had already had Evelyn and her body and mind were healthy. She was more than ready to be a surrogate for this couple.

That December, Tori and David flew to Cyprus with the couple, George and Kim Razey, for the procedure. Why Cyprus? George and Kim are world travelers who got married in Africa. They did a lot of research and discovered a fertility clinic in Cyprus that reported great results.

Doctors there implanted two healthy embryos five days after they were fertilized and remarkably, both of the embryos took! The pregnancy went smoothly and in the summer of 2015, at 37 weeks (full term for twins), Petra and Henry were born — healthy and beautiful — and handed over to their loving parents.

Heading into 2020, Tori and David have more goals and dreams to fulfill — and along with Traci, they are determined to help Naches grow. After purchasing Highway Espresso from Traci in 2018, Tori now runs the stand full-time, with help from her baristas.

Traci’s mother owns the corner lot adjacent to the coffee stand. She and Tori have plans to turn an an old home on the lot into a wi-fi café — serving breakfast, lunch and coffee as well as evening appetizers and drinks. Homemade soup and sandwiches will be on the menu, and live music acts are a possibility.

Tori, David and Traci donate to local schools and eventually want to offer a college scholarship program for the high-school age baristas who work at the stand. David and Tori also now own the house behind the coffee stand as well as the land adjacent to it and are in the process of developing it to be a community-based space that supports the people and businesses of the Naches community.

Some of their ideas for this space include putting in grass, retaining walls and fencing to turn it into a park. They will also add parking and are planning on remodeling the old house that is on the property, as well as possibly building a structure that could host community classes, bazaars, farmer’s markets, weddings and summer music events.

Like many successful working moms, Tori has an amazing support team to help her out.

“Through every single idea, season, and up and down, David has really been my rock,” she said. “He has been so supportive of keeping our life here and being involved as much as he can with my family and with our community. And none of my goals would have been attainable without the help and support that I get from my parents and grandparents.”

Drive down Highway 12 on any given morning and you’ll see cars stacked up at the drive-through, waiting for their morning Joe. It’s coffee — with a side of community.