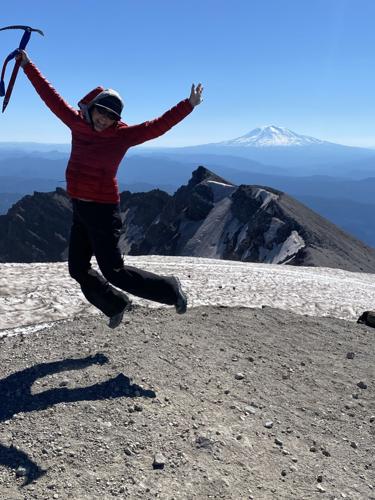 Jumping for joy at the summit of Mount St. Helens. 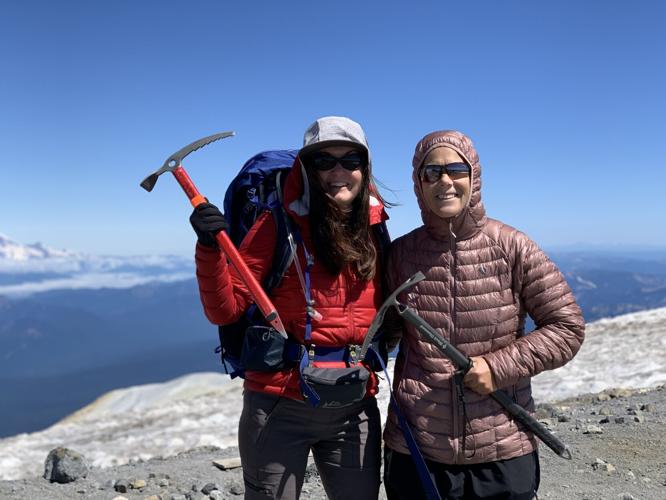 Stacey and Addy at the summit of Mount Adams. 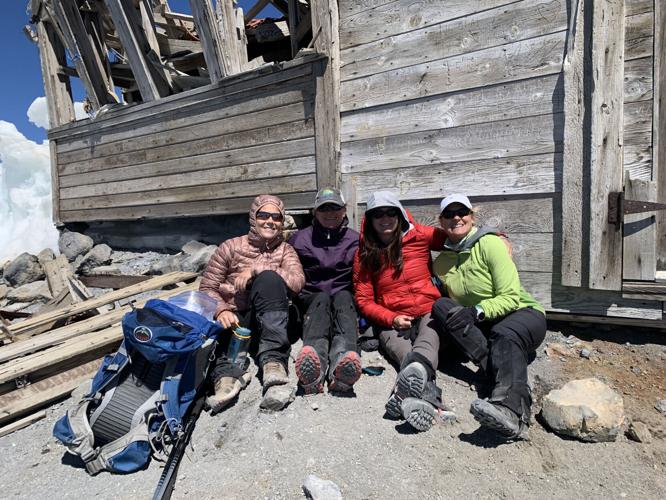 Stacey, Addy, Mary and Eva at the summit of Mount Adams. Most climbers never see this old building because it is covered in snow. In July 2021, an unprecedented heat dome in the state melted off a lot of snow on all of the state’s peaks. 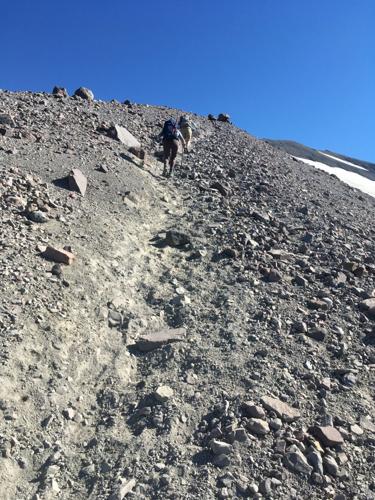 The final ascent of Mount St. Helens is deep ash. We were lucky that the temperature was still a bit chilly so the ash was firmer than normal. 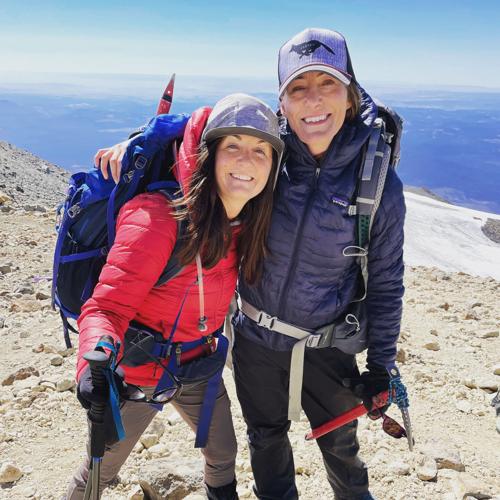 Addy ran into her longtime friend Bri on Mount Adams. Bri was descending while Addy had a few more steps to go to reach the summit. 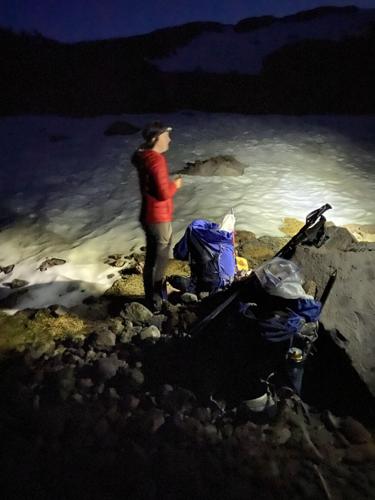 Addy taking a 4 a.m. break during her Mount Adams summit. 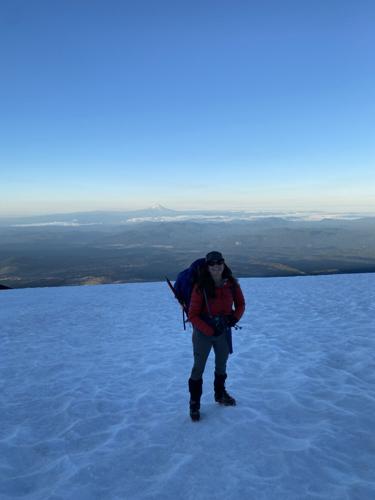 Addy geared up with crampons and ice ax, ready for climbing in the slick snow and ice.

Jumping for joy at the summit of Mount St. Helens.

Stacey and Addy at the summit of Mount Adams.

Stacey, Addy, Mary and Eva at the summit of Mount Adams. Most climbers never see this old building because it is covered in snow. In July 2021, an unprecedented heat dome in the state melted off a lot of snow on all of the state’s peaks.

The final ascent of Mount St. Helens is deep ash. We were lucky that the temperature was still a bit chilly so the ash was firmer than normal.

Addy ran into her longtime friend Bri on Mount Adams. Bri was descending while Addy had a few more steps to go to reach the summit.

Addy taking a 4 a.m. break during her Mount Adams summit.

Addy geared up with crampons and ice ax, ready for climbing in the slick snow and ice.

Last July, I stood at the summit of Mount Adams, the whole of Washington state spread out before me. I was crying pretty hard, from exhaustion and satisfaction, so the view was blurry. But I had made it. I had summited Mount Adams.

Plenty of people climb mountains. They make a hobby of it. They’ve climbed Mount Adams dozens of times in all seasons. Mount Rainier, too. But this climb was for novices. Novices with something to celebrate. But also, something to prove.

What I wanted in the journey was not just to summit Mount Adams, but to climb it in celebration of a notable anniversary: my two-year cancer-free anniversary.

I was lying flat on a physical therapy table when the idea first surfaced. To be precise, I was at my physical therapist’s office doing exercises to regain my range of motion after several surgeries following breast cancer.

Mary, my physical therapist, asked me if I wanted to climb Mount Adams with her that summer. She offered casually to take my friend and me, to make sure we had the right gear, to get the permits, to get us up and down safely. I think I said yes because she was so casual about it, so certain for me.

My friend Stacey and I have a special connection. We were diagnosed with the same kind of breast cancer two weeks apart but ended up having our cancer-free surgeries in Seattle on the exact same day, with the exact same surgical team. So, our anniversary is even more joyous because we share it.

Mary and her sister Eva have taken many women to the top of Mount Adams. Mary has a knack for finding the women. At just the right time in their lives, for just the right reason, she comes to them and says, I’ll take you to the top.

The summit was going to be the hardest thing I’d ever done physically and so I set about getting in as many vertical feet as I could manage. With ski season winding down but snow blocking some of the more envious mountain trails, I headed to our backyard in Yakima and found plenty of terrain in the shrub steppe.

The Yakima Skyline Trail to Gracie Point is a perfect place to start training — roughly 3,200 vertical feet gained in the five miles to the top. Typically, in the spring there is no snow. The trouble was, I wanted to take my dog and avoid both the heat and rattlesnakes. This predicament led me to several 3 a.m. starts, when I set off on the hike with a headlamp and our dog Marco.

Another nearby hike is the meandering trails immediately behind the Central Washington Agricultural Museum. One trail leads almost straight up to the crest, and I chose that one up, and a different one down. It’s not the mileage I needed, but it satisfied the miles over vertical feet with a very steep climb, the kind where I needed my hands to clamber up. Along the top crest I could choose different paths down. Occasionally, I’d do this hike twice in a row to get more training. I always carried a light pack with supplies for my dog and me.

In early June, my friend Amy agreed to meet me before sunrise and drive over to the west side to climb Mailbox Peak. Mailbox is just outside of North Bend and is frequently used as a training trail for Mount St. Helens, Mount Adams and even Mount Rainier. Quite honestly, Mailbox Peak was my least favorite hike. The beauty of the old growth forest switchbacks quickly grows monotonous over the hours it takes to get to the rock field.

Back in the valley, as the snow melted, I scoured the various hiking Facebook groups I was a part of to find more ambitious hikes. That is when I stumbled upon the suggestion to summit Mount St. Helens to prepare for Mount Adams. That is how my summer dedicated to training for and summiting Mount Adams became my summer of summiting both mountains.

It is quite difficult to get a permit to summit Mount St. Helens in the summer, so I wasn’t sure how I could manage it. One day, I was talking with my friend Emily about my plans, and she revealed that she was a volunteer with the Mount St. Helens Institute, an organization dedicated to the beautiful old volcano. They offer guided hikes to the summit and various other hikes and experiences around the mountain. Because she is a volunteer, she has a few extra passes every season to summit with friends. I felt so special when she offered to take me to the summit in late June, three weeks before my Mount Adams summit.

I tricked out my minivan with my daughter’s twin mattress so I could sleep in my car at the Mount St. Helens summit parking lot on a Friday night in late June. We woke Saturday at 2 a.m., quickly ate breakfast, checked our gear, and headed out to summit the broken peak.

I can vaguely remember its explosion when I was a small child. It seemed remarkable to me that I would climb to the top and peer down into the still-steaming crater. We hiked for hours and watched with reverence as the sun came up and revealed the glowing peaks around us. I ate a lot of food, I drank a lot of water, and my spirits and physical condition were in peak form.

At the summit I joyfully jumped in the air with Mount Adams in my shadow. The very best part about climbing any of our nearby peaks, and I’ll stick by this claim until the very end, is the glissading on the way down. Sledding on your bum with your powerful ice ax across your body to slow you down — it is exhilarating. Quite honestly, I’d be up for more summits if I was assured some excellent glissading on the descent.

My last training hike before I summited Mount Adams was Goat Peak. I left the house quite early with Marco. While on that 10-mile, 5,000-vertical-foot climb, I was solo. Near the summit, I took refuge in the shade, feeling tired and hungry and a bit deflated. I was startled to see a woman coming up the trail behind me, solo also.

When she reached me, she stopped to catch her breath, out for a trail run in the early summer morning. We chatted for a bit, and I told her about Mount St. Helens and that I would summit Mount Adams in the coming week.

When she turned to go, I told her, “I’m proud of you.” She smiled widely and repeated the encouragement to me. Hours later, when Marco and I finally returned to my car, I found a love note from Robyn, the solo trail runner. The ways in which women in the outdoors support each other is breathtaking and made my training hikes and summits even more memorable.

Our summit of Mount Adams was done in a day. Most people hike up to Lunch Counter on day one, camp, then summit early the next morning and descend. Our guides preferred to not carry up a heavy pack with camping supplies but just get out and do the peak all in one, long day.

We woke at 1 a.m. and were hiking through a forest with head lamps by 2 a.m. We reached Lunch Counter and the first bit of snow by sunrise. Last summer, the heat dome melted so much snow in the mountains that our summit was very different than normal; we did far more rock, ash and boulder climbing than snow.

We hiked one long and steep snow slope that required heavy-duty crampons and an ice ax; this was also, sadly, our one little bit of glissading on the way down, hours later. After that, instead of the normal continuation of climbing in snow, we were faced with a steep boulder field. This part of the climb was slightly dangerous with loose rock falling from above and yet monotonous at the same time.

The last scramble to the top is in deep ash and dirt, similar to the final ascent of Mount St. Helens. This is mind work because your effort gets you half as far as normal — place your foot, shift your weight, slide backward some, repeat.

Near the top, when we were really wiped out, we met friends from Yakima, a small group of women on their descent. We loved on each other a few minutes and then continued on. As I write of this experience, it occurs to me that I cannot quite describe how mentally arduous this climb was. Surely it was beyond any other physical pursuit I’ve experienced; it also required constant monitoring of my thoughts and emotions and passionate and encouraging self-talk and certainty, echoed, of course, by Mary and Eva and Stacey.

The summit was spectacular, but brief. We still had a long way down to our car. All told, it took me 15 hours to do the 15-mile summit and I honor every minute of that summit in my life now with a quiet reverence and satisfaction.

There are dozens, if not hundreds, of people in our community who could write an informative article about summiting mountains and the gear and training required, even brag about C2C times (C2C means from your car, to the top, and back to your car). What I intend to do with this story is inspire the novices: the woman who wants to tie something painful or raw in her life to a summit that she never thought she could reach.

If climbing mountains is not in your future, consider safely rappelling down the front of the Liberty Building this August at the Over the Edge event benefiting Yakima’s Wellness House.