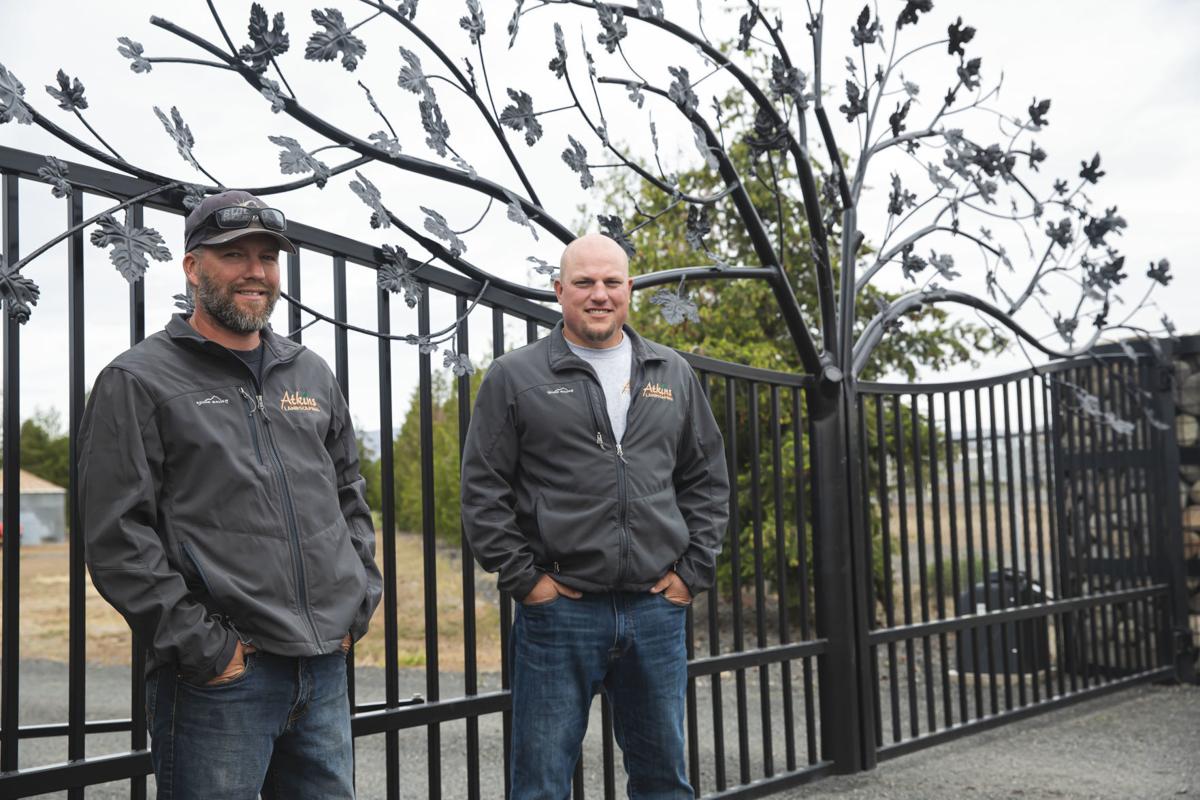 Chad Atkins' right-hand man is Blaine Faris ... though he's on the left in this photo. 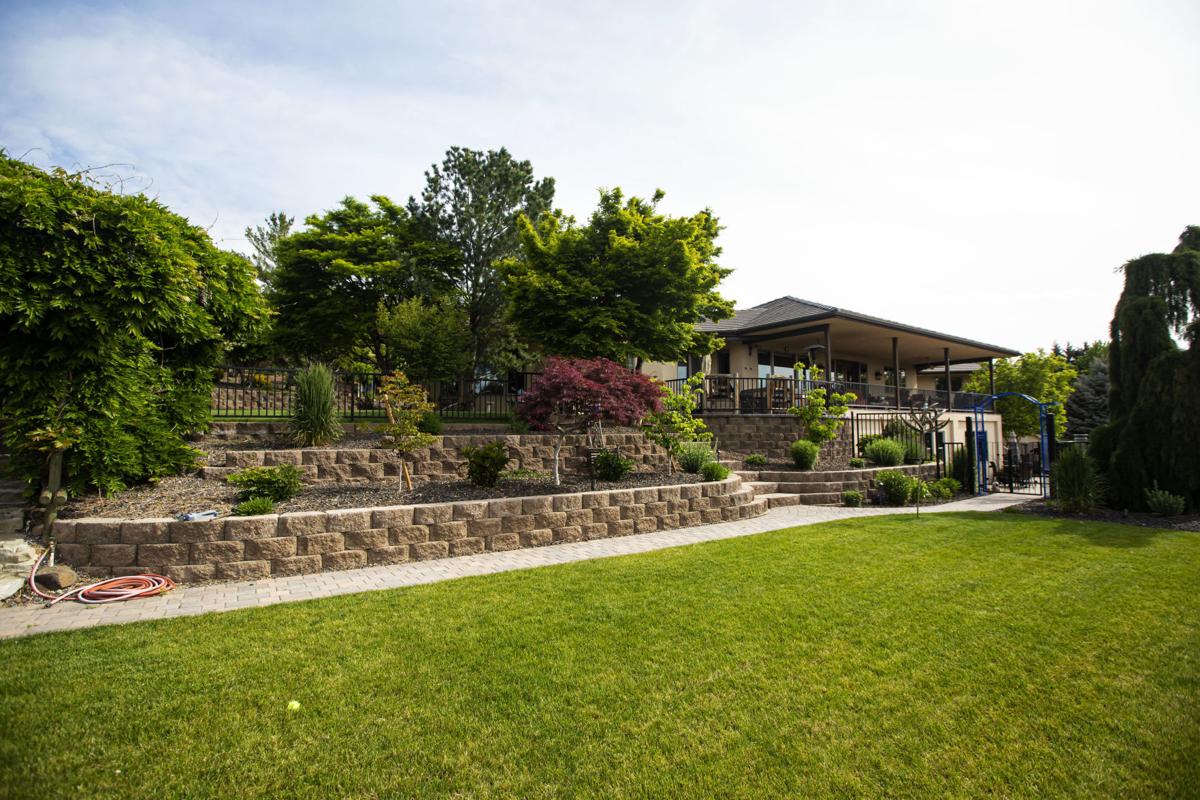 Grass, retaining walls, shrubs, irrigation -- Atkins' crew installed and still maintains all of that in this sweeping yard. 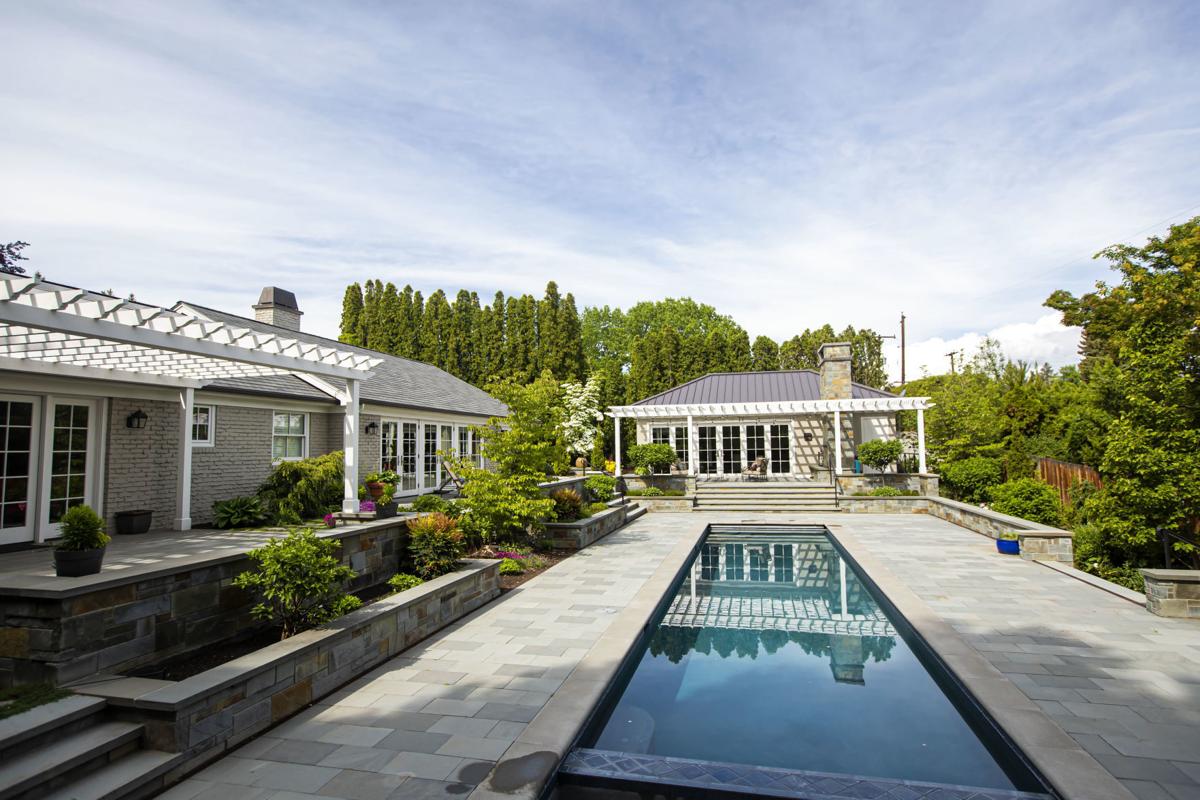 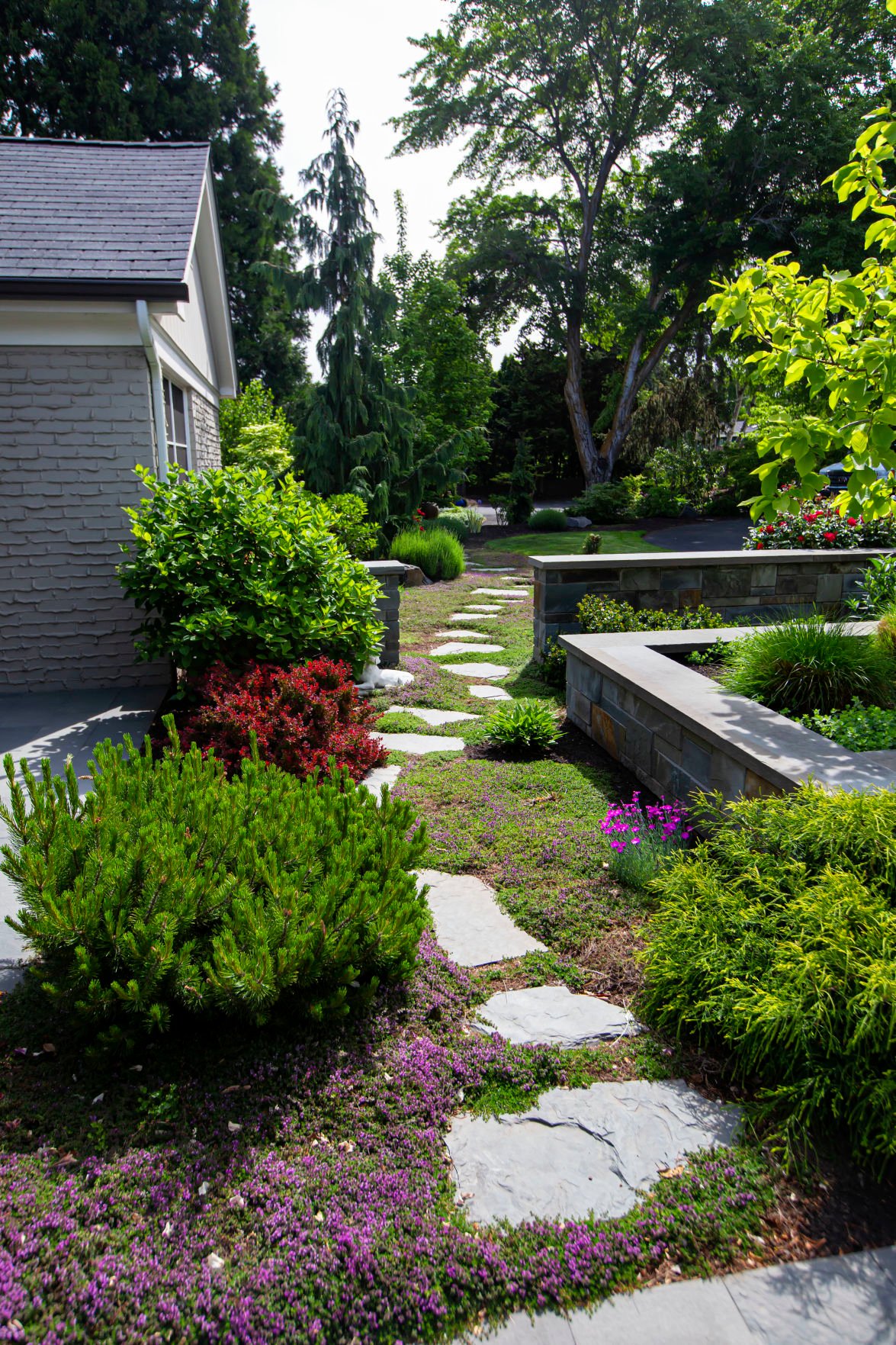 Some strategically placed stepping stones, retaining walls and greenery can turn a standard yard into a secluded haven. 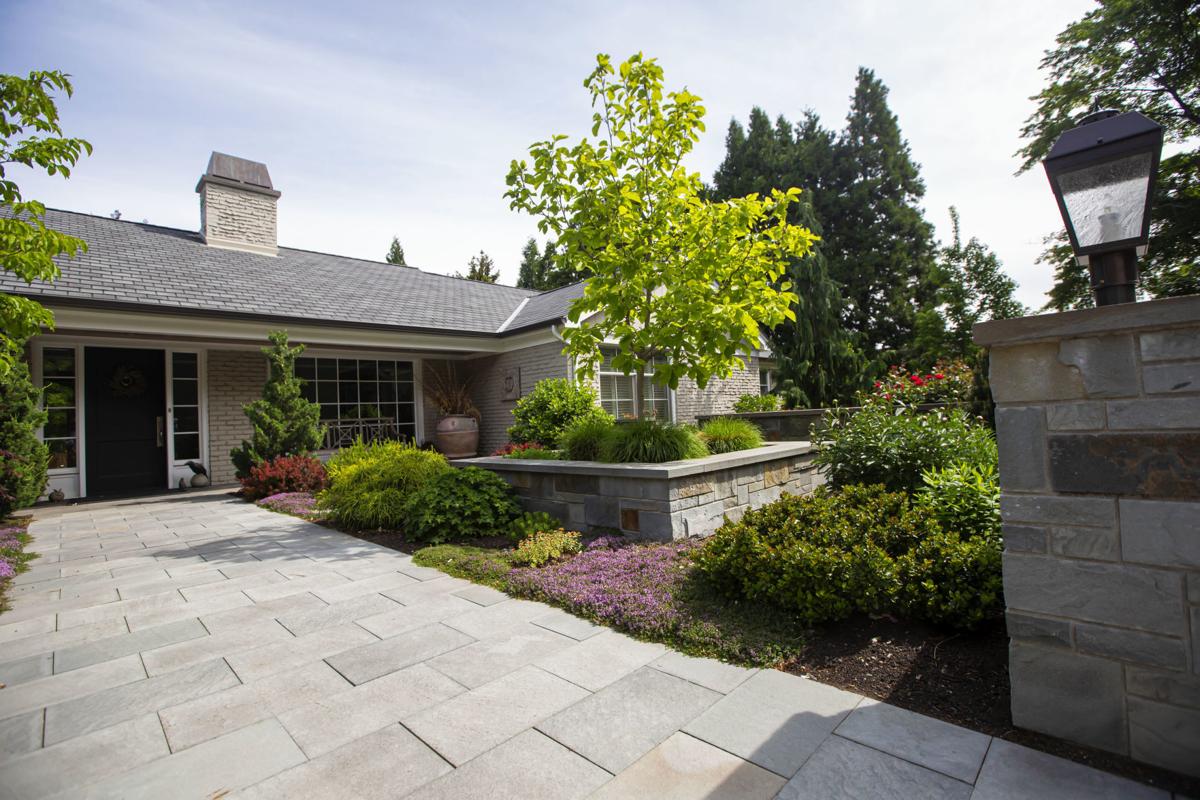 This wide, welcoming entryway is all Atkins. 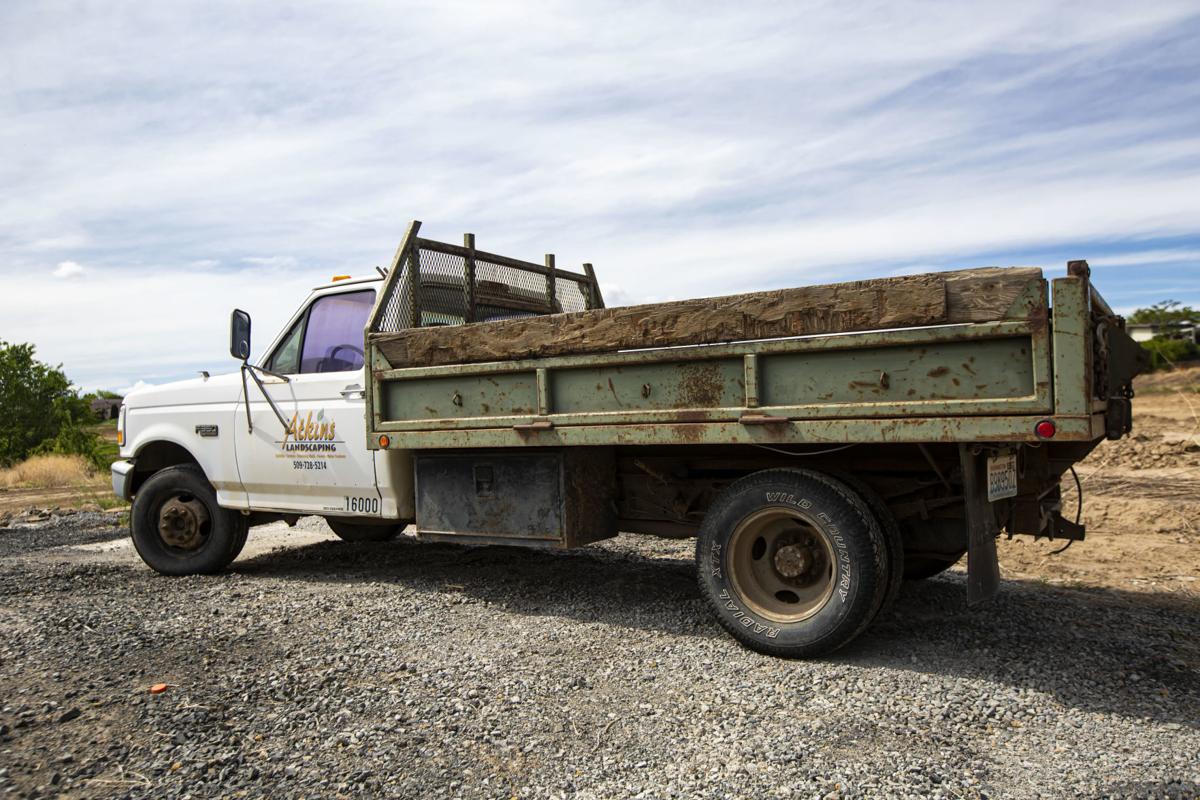 Chad Atkins still uses that first dump truck -- a '94 Ford F-350 2WD duelie that he bought for $3,500. He shortened the frame himself and built a dump box for the rig. 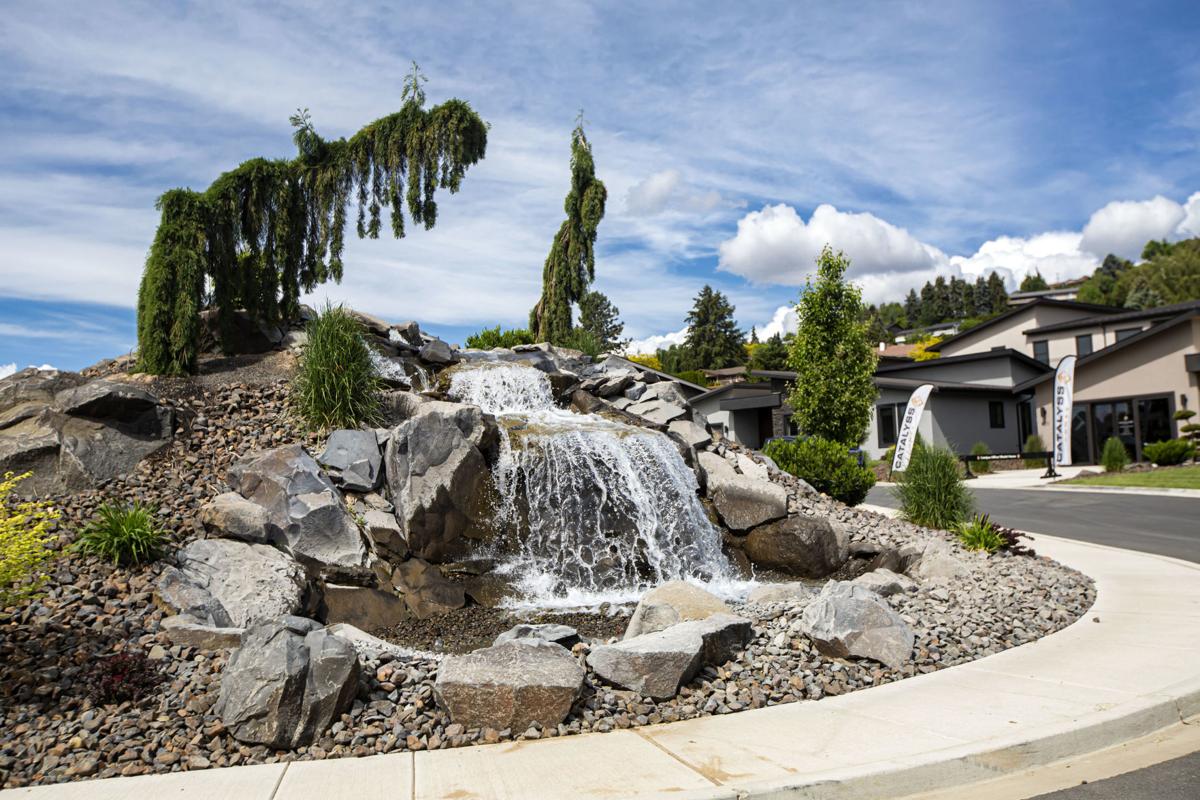 Atkins Landscaping does a lot of work around the Yakima Valley for Catalyss Homes. 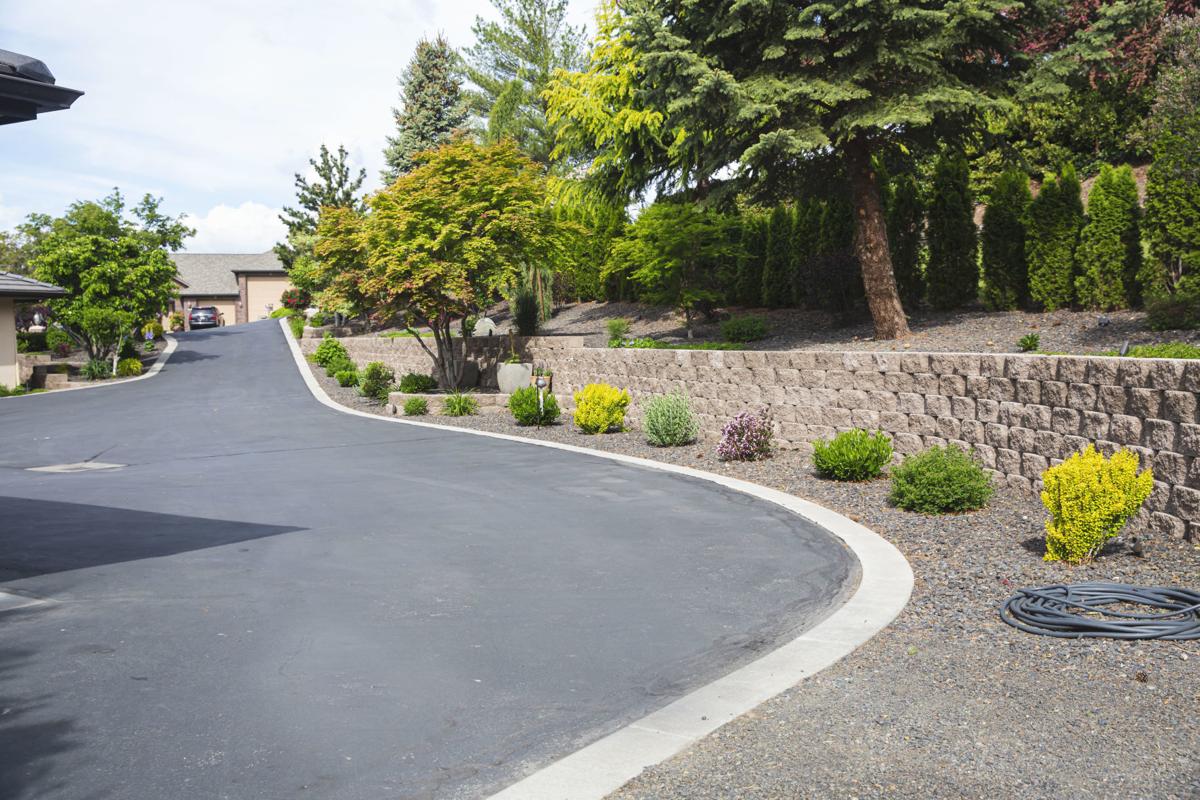 Atkins Landscaping smooths the way for this local residential drive. 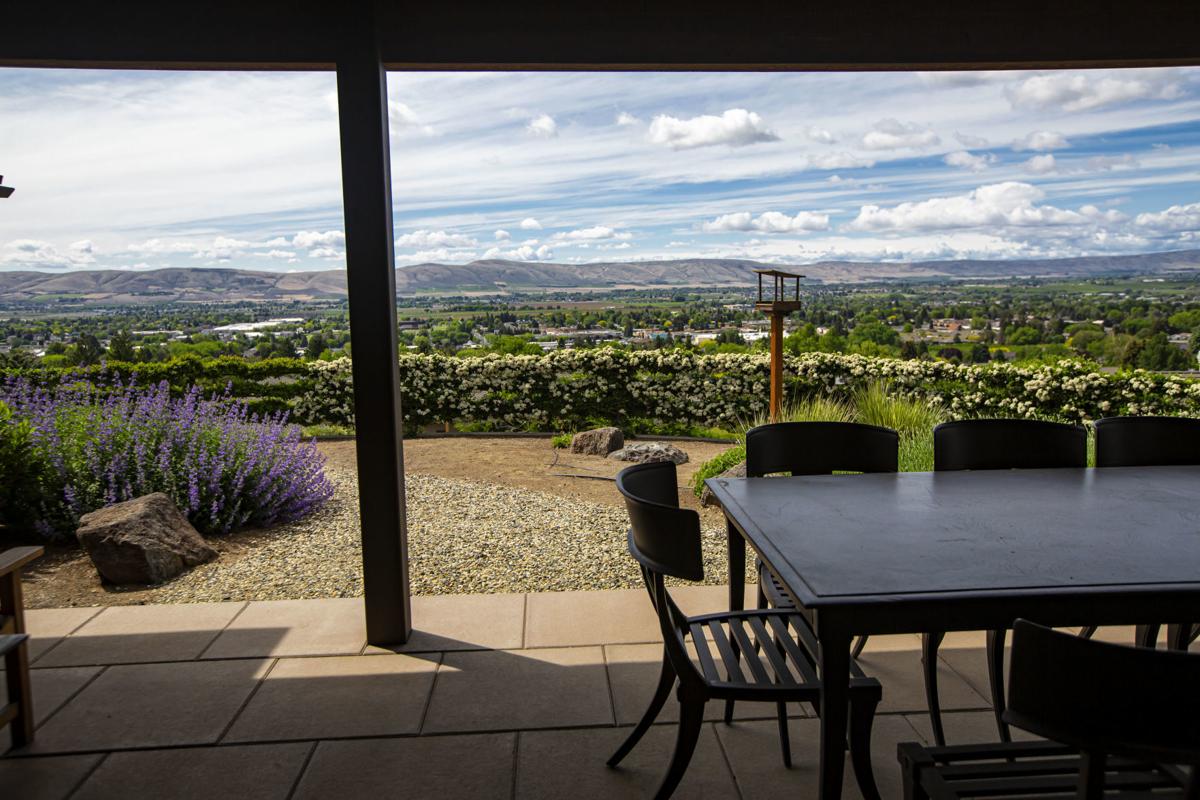 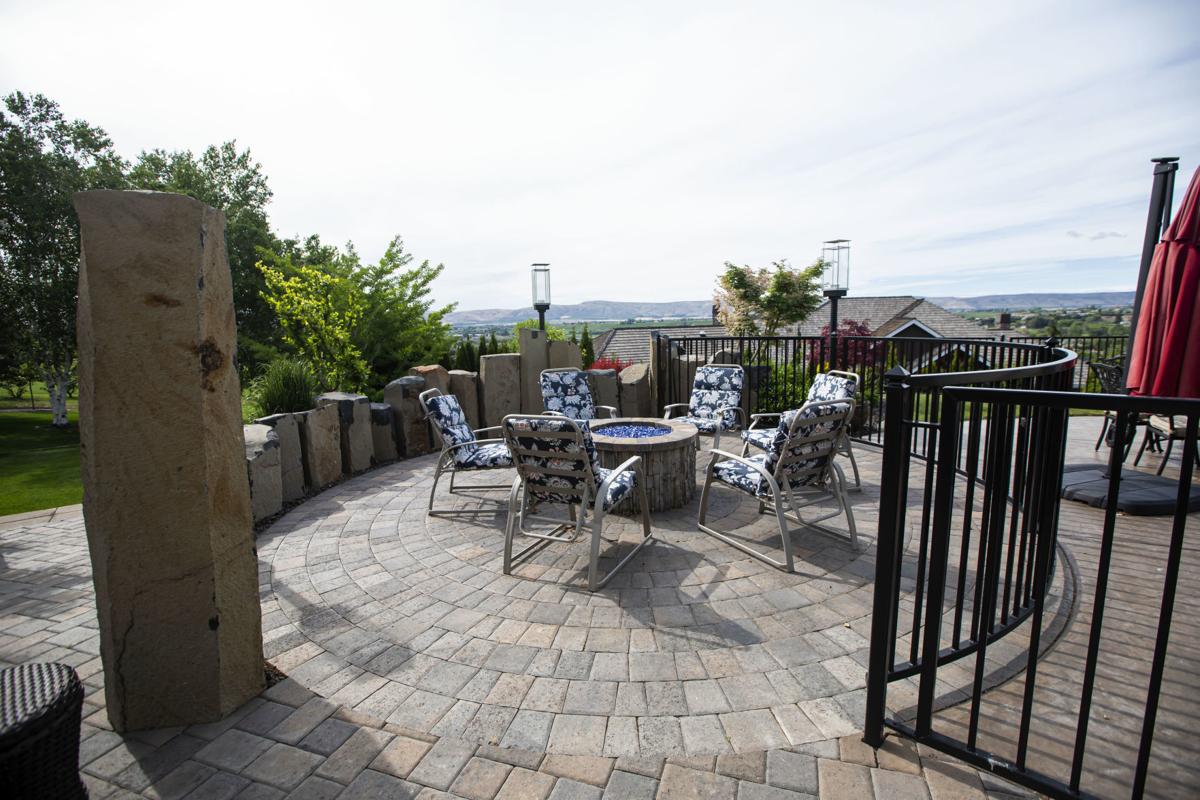 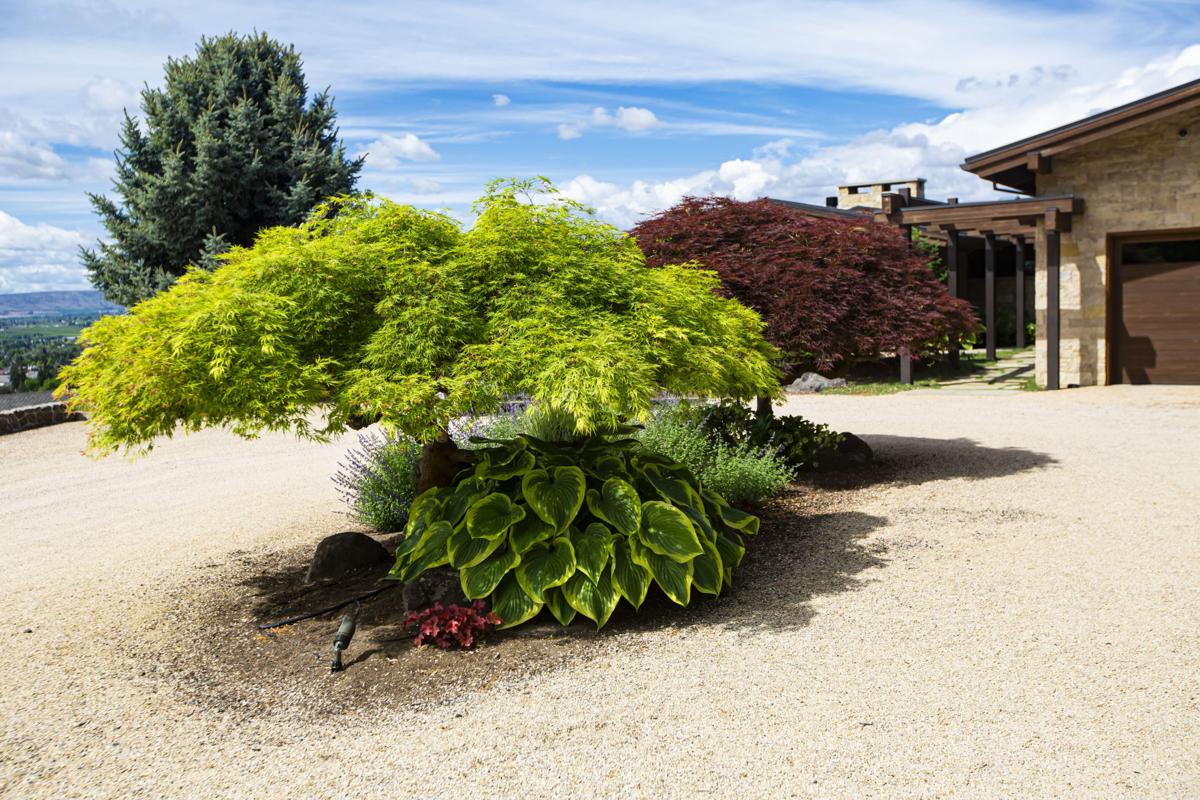 The fine driveway rocks at this Yakima place (home to an avowed Francophile) came all the way from France.

Chad Atkins' right-hand man is Blaine Faris ... though he's on the left in this photo.

Grass, retaining walls, shrubs, irrigation -- Atkins' crew installed and still maintains all of that in this sweeping yard.

Some strategically placed stepping stones, retaining walls and greenery can turn a standard yard into a secluded haven.

This wide, welcoming entryway is all Atkins.

Chad Atkins still uses that first dump truck -- a '94 Ford F-350 2WD duelie that he bought for $3,500. He shortened the frame himself and built a dump box for the rig.

Atkins Landscaping does a lot of work around the Yakima Valley for Catalyss Homes.

Atkins Landscaping smooths the way for this local residential drive.

The fine driveway rocks at this Yakima place (home to an avowed Francophile) came all the way from France.

It says a lot about a business owner when he credits many of his company’s successes to the hard work, loyalty and talent of his employees. So when I asked Chad Atkins of Atkins Landscaping about the amazing work his company produces and the endless list of clients he serves in the Yakima area, I was curious to see what his response would be. He didn’t hesitate more than a second before answering: “I am blessed with a great crew. Six of my guys have been with me for at least five years and my first employee that I hired 15 years ago is still one of my foremen.” You see, Chad knows that although he may run the company, he would never be where he is without the dedication, teamwork and craftmanship of his workers, day in and day out. And that, to me, is not only a sign of a quality employer, it’s a sign of a great leader. But like many other small-business owners, he spent considerable time learning the ropes working for other employers and in other industries before branching out himself.

Chad was born and raised in Gleed — in fact, he still lives within a mile of his family home. Through high school, he had seven jobs — including movie-theater attendant, construction worker, checker at Albertsons. And he got his first taste of landscaping while working on Al DeAtley’s yard the summer before his senior year of high school. After graduating from Naches Valley High School, he enrolled in the IBEW Local 112 Union electrical program. While he was on the waiting list, he pulled green chain at Layman Lumber (“Where I learned how to work,” Chad says). Once the electrical program opened up, he spent 2 ½ years in training — and then 9/11 hit. At the time, he was working for Bailey Electric and of the 70 employees working there before that tragic day, he was one of four kept on until all the employees were laid off for six months.

But instead of giving up or waiting for life to bring something else his way, he began working for a local landscaping business. That one choice, that one decision, became the first step in creating the life, in creating the business that would become his future. In 2005, after three years of learning the ins and outs of the landscaping business, at the ripe age of 25, Chad opened Atkins Landscaping. For three months he ran the entire show himself. Then he hired his first employee, Ronaldo, who would later become his first foreman. At five months, he was busy enough to buy a Bobcat, and after saving up his money that first year, he purchased an enclosed trailer that he built up and fixed as his winter project. (Like many of his friends, Chad learned how to weld in shop class at Naches Valley High School, and then spent year after year learning the ins and outs of working with metal, wood and machinery in his free time. His first Atkins Landscaping dump truck was a 1994 Ford F-350 2WD duelie that he bought for $3,500. He shortened the frame himself and built a dump box for the rig. At one point, he had three of these types of dump trucks that he and his friends had built up to use for his business. To this day, he still prefers to build everything he can in-house — a choice that many people don’t have the knowledge, time or work ethic to make.)

In Chad’s second year of business, he hired two more employees. By his third year, he purchased a dingo, an excavator and a dump truck (the first landscaper in Yakima to have one), both of which were game changers for his business. During his fifth year in business, he brought on a full second crew and also hired his best friend, Blaine Faris, who was and still is an extremely talented fabricator. “There’s pretty much nothing that Blaine can’t build,” says Chad. “On a project with no limits, a guy like Blaine has no limits. He truly will create a paradise, every single time.” After a year of working with a crew, Blaine become Chad’s second foreman. By the business’ 10{sup}th{/sup} year, Blaine’s right-hand man, Jesus, became Atkins Landscaping’s third foreman. Now, the crews have three excavators, four skid steers and as of 2018, their own gravel pits and rock yards at their five-acre property next to the Pegasus Project. (You may have seen the beautiful metal gate in the shape of a tree at the entrance of their property on your left as you head toward Naches on U.S. Highway 12. ThiSs was yet another winter project created by Blaine and Chad. At 24 feet wide and 11 feet 4 inches tall, it’s hard to miss — and absolutely beautiful.) Chad’s goal within the next year at that property is to have a retail yard that also sells rock, gravel, sand, PVC parts and sprinkler systems to his clients and to the public. He is a big supporter of homeowners doing their own projects and wants to help them out any way he possibly can.

Fifteen years after opening, Atkins Landscaping has grown from being a one-man show to creating and managing some of the most prestigious, beautiful and intricate outdoor projects in the valley. “We truly enjoy creating landscape projects from the ground up,” says Chad. “After building a trusting relationship with our clients on a base level, we then are able to expand onto larger projects such as custom-made gates, fences, water features and more.” A client’s wants, needs and visions are always the crew’s first priorities, which is probably why they their customer base is full of repeat clients.

In his free time, Chad heads to the mountains with his two sons and his friends — hiking, dirt biking, jeeping or snowbiking — or he stays closer to home, working on and building passion projects in his shop. “I love learning to build something new for the first time,” Chad says. His last big project was a jet boat. The next? Maybe an airplane. And when it comes to giving back to the community, Chad not only supports local sports teams in Selah and Naches, but he donated his equipment to build the bike track at Rocky Top and volunteers with the U.S. Forest Service to help build and maintain 4x4 community and motorcycle trails.

His advice to his boys and to anyone else out there who wants to start their own business and live a life they love? “Don’t be in a rush, enjoy being small, have fun, don’t stress, and find yourself some phenomenal employees. Plants, just like a business, take time to grow, so enjoy the process. And don’t forget … life’s a garden — dig it!”