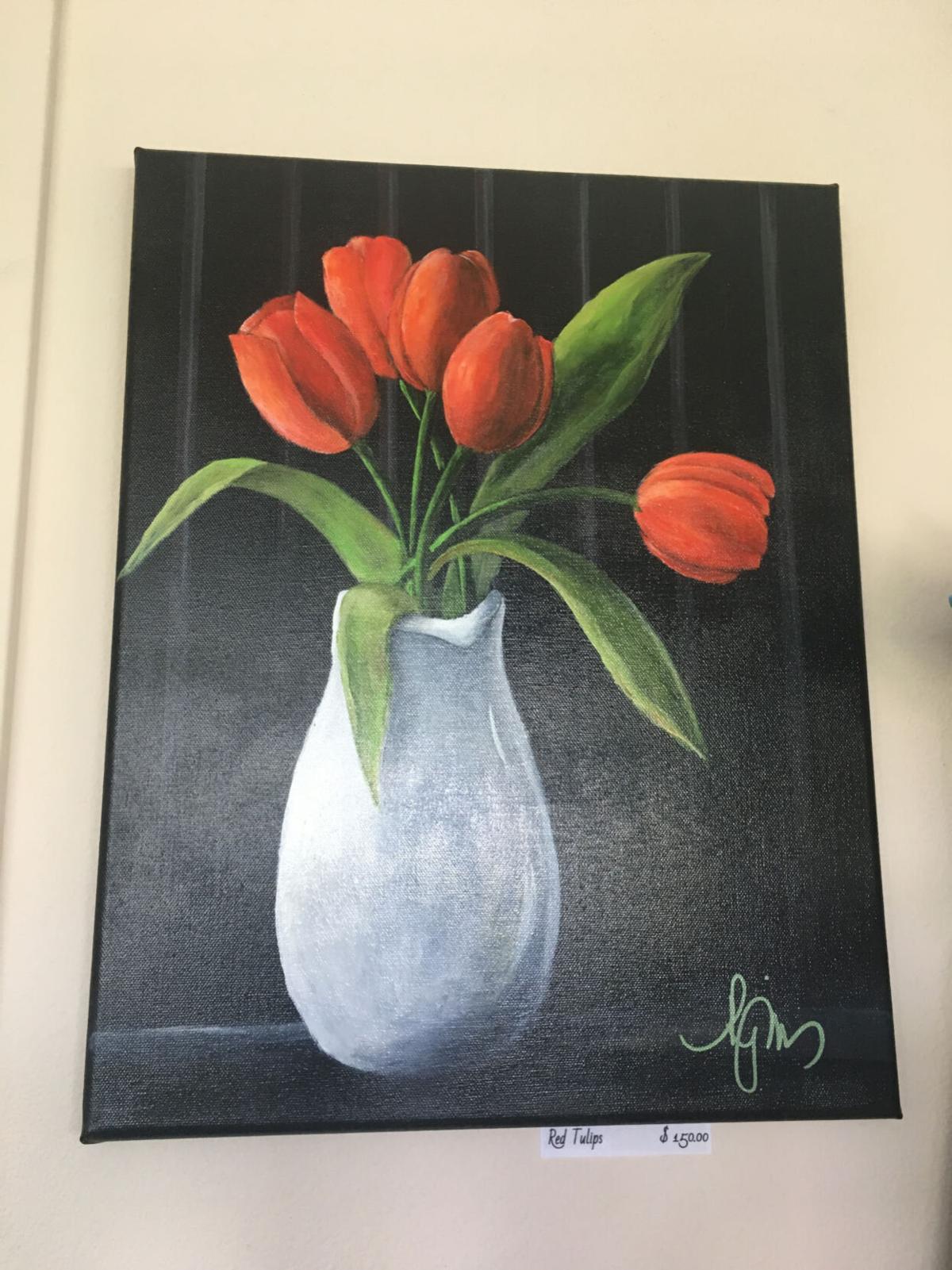 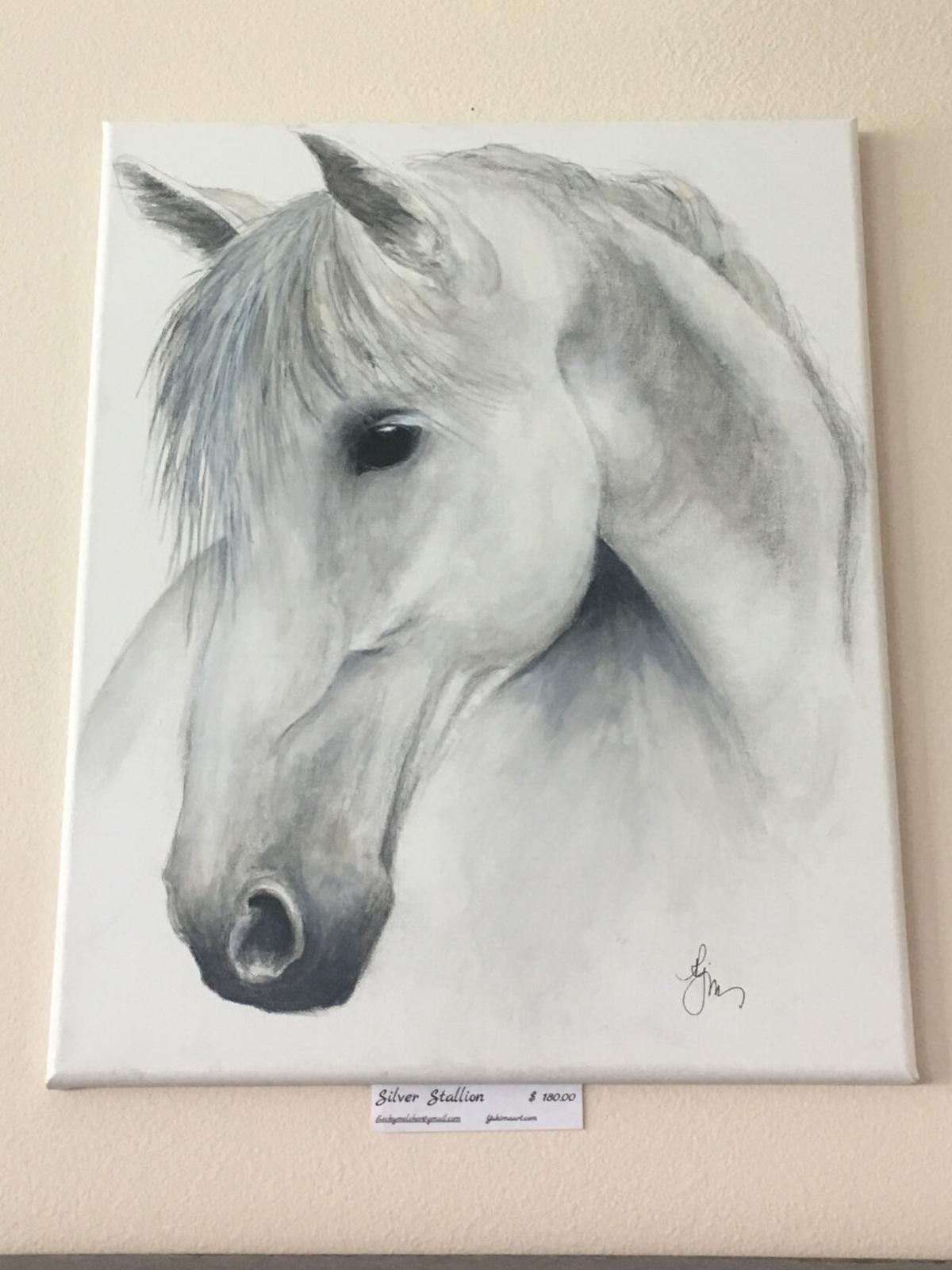 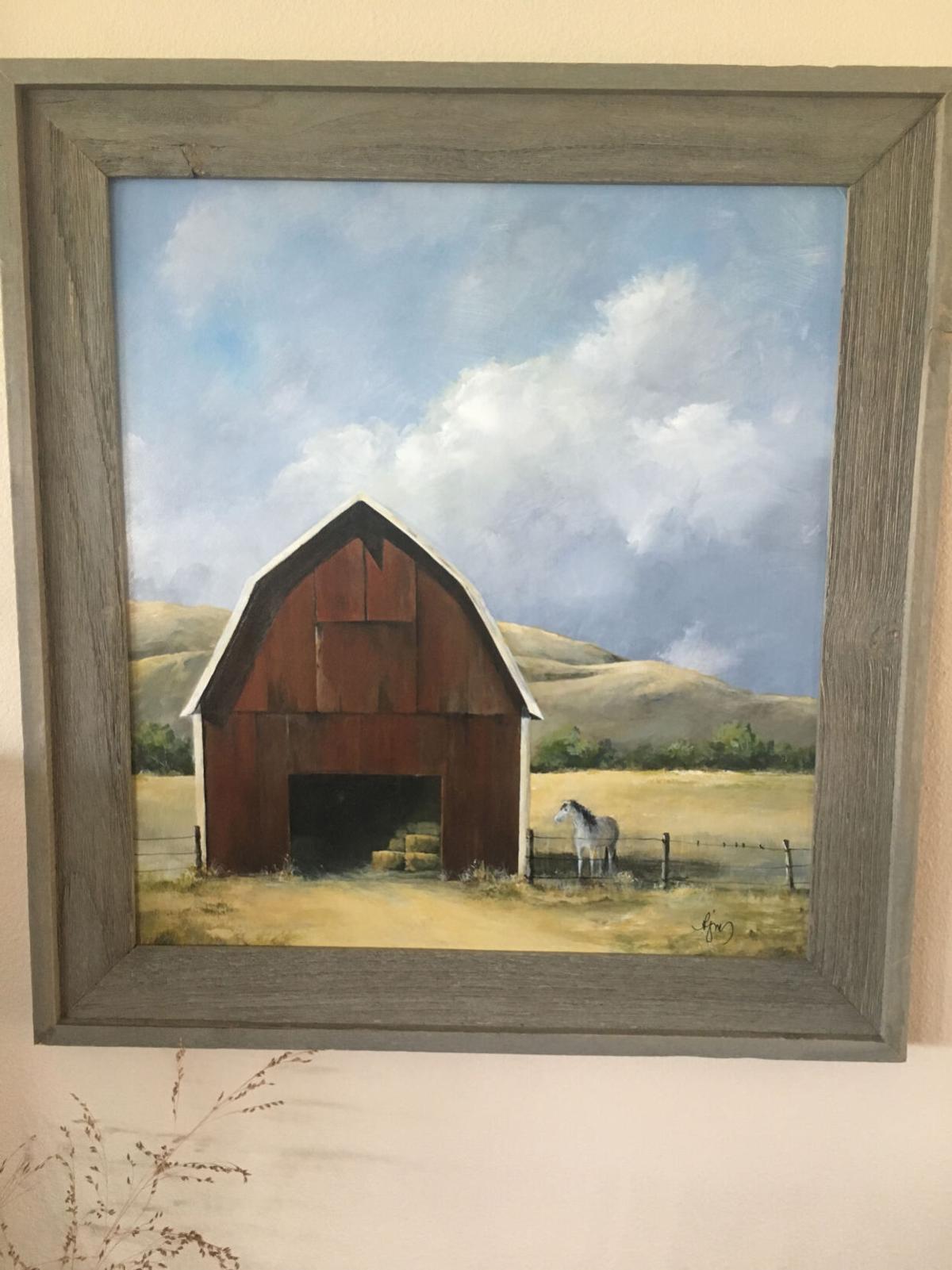 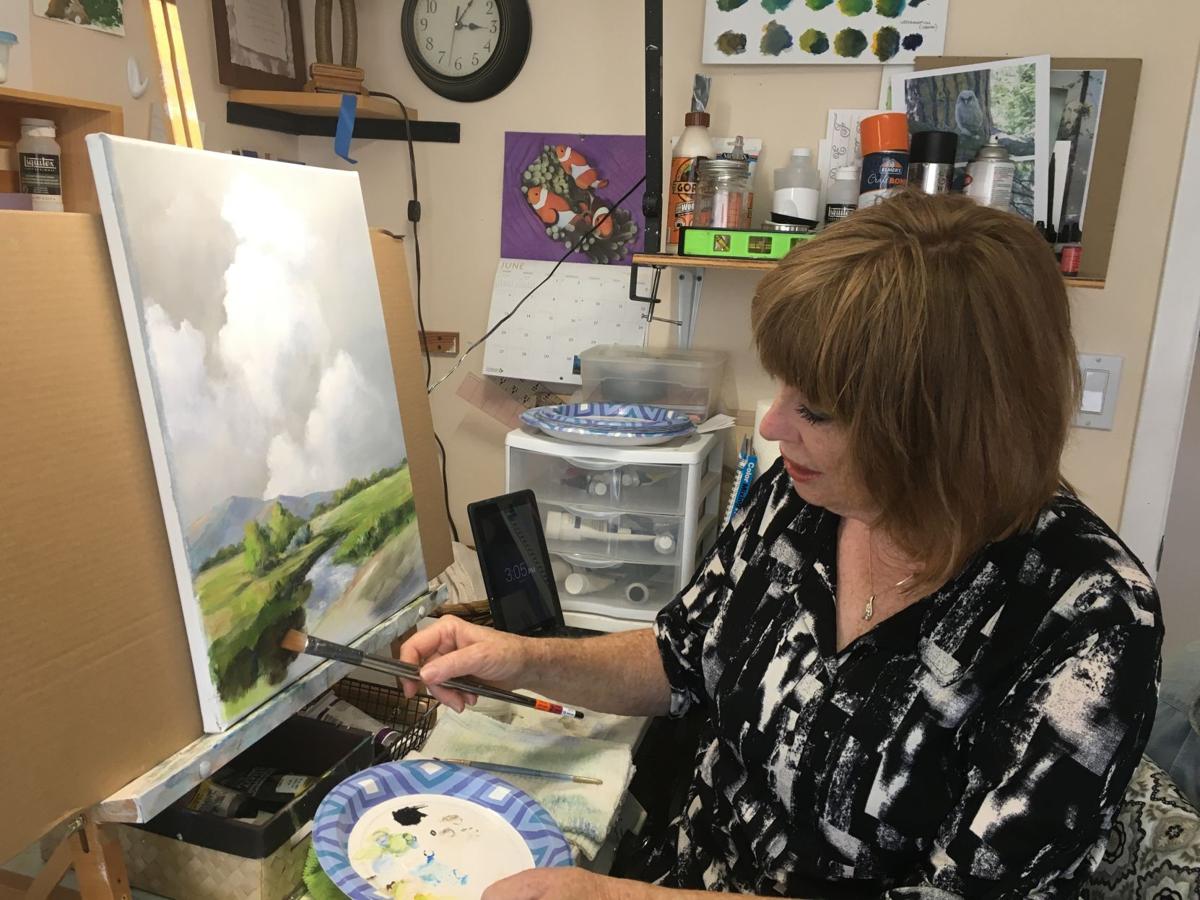 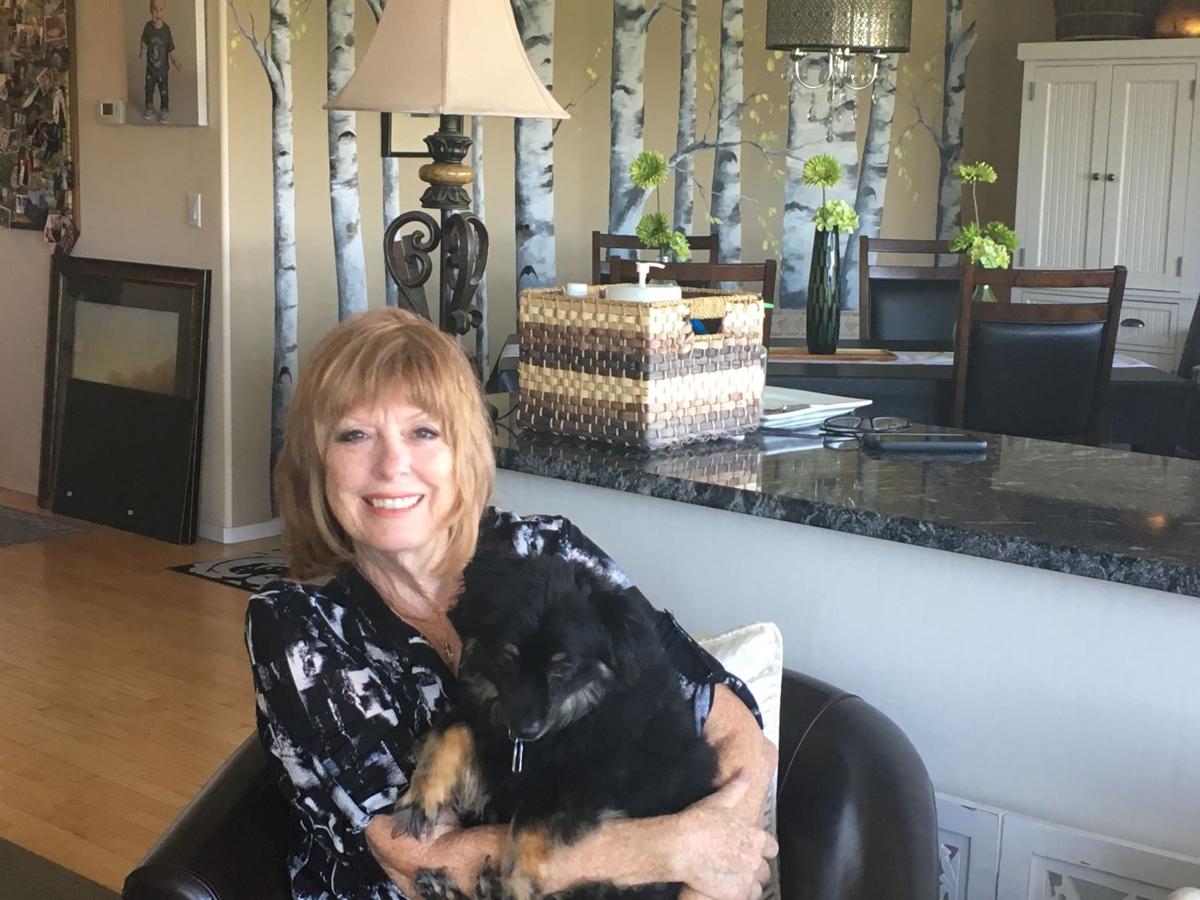 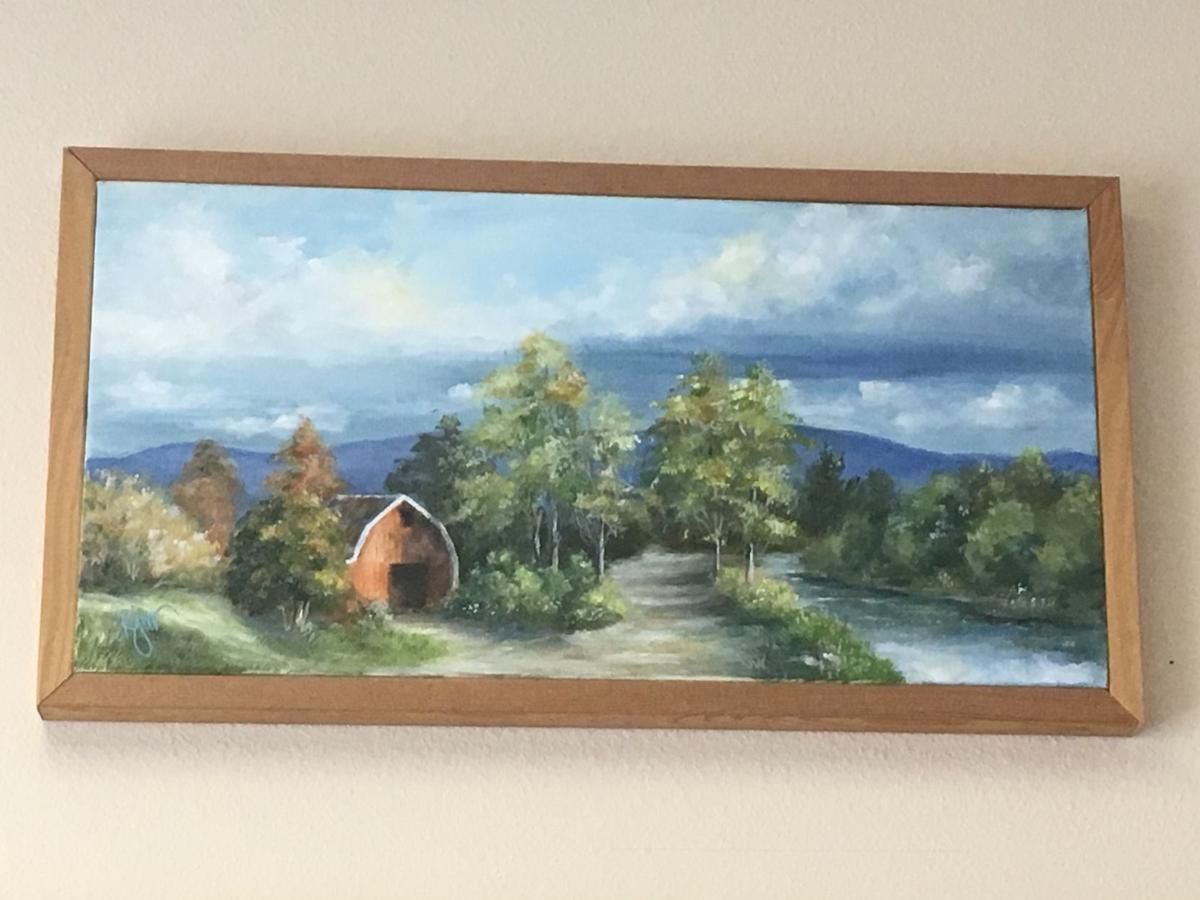 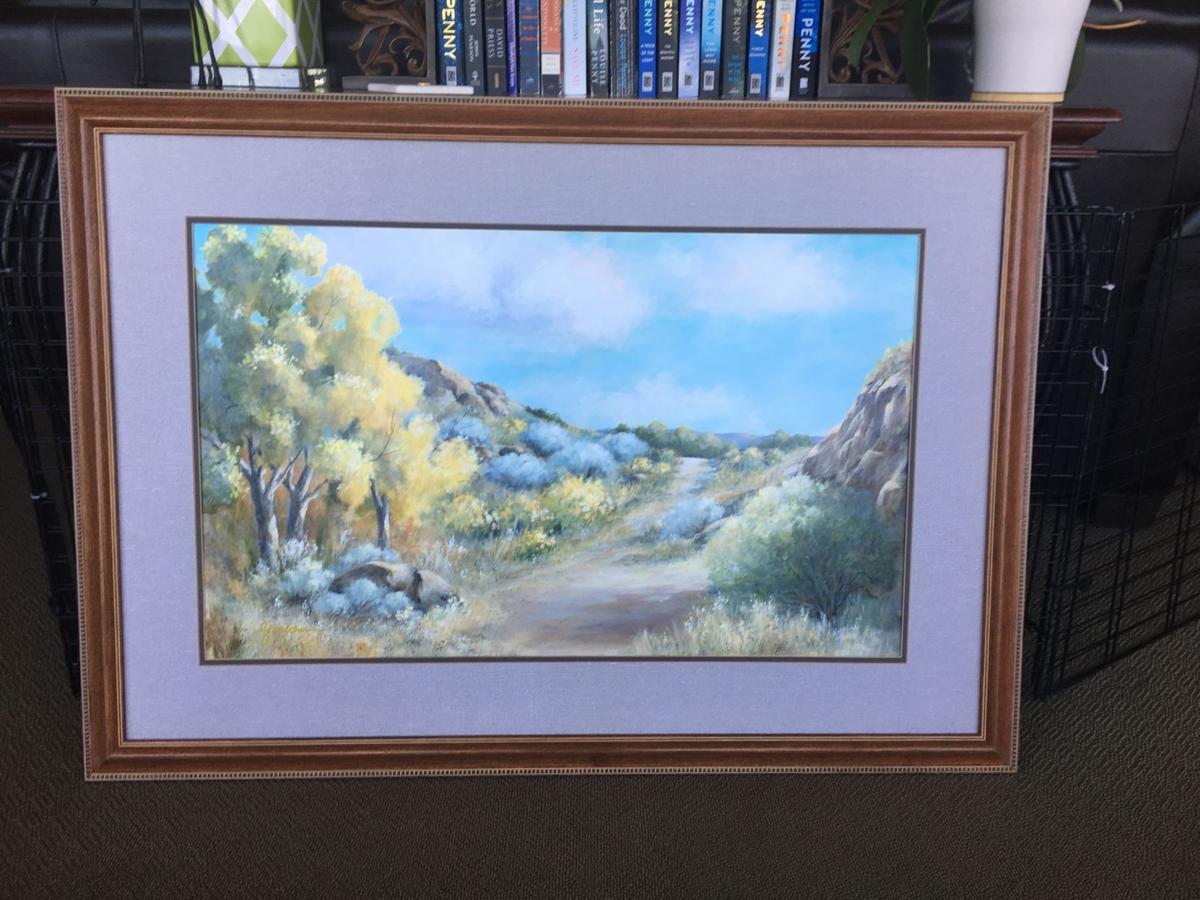 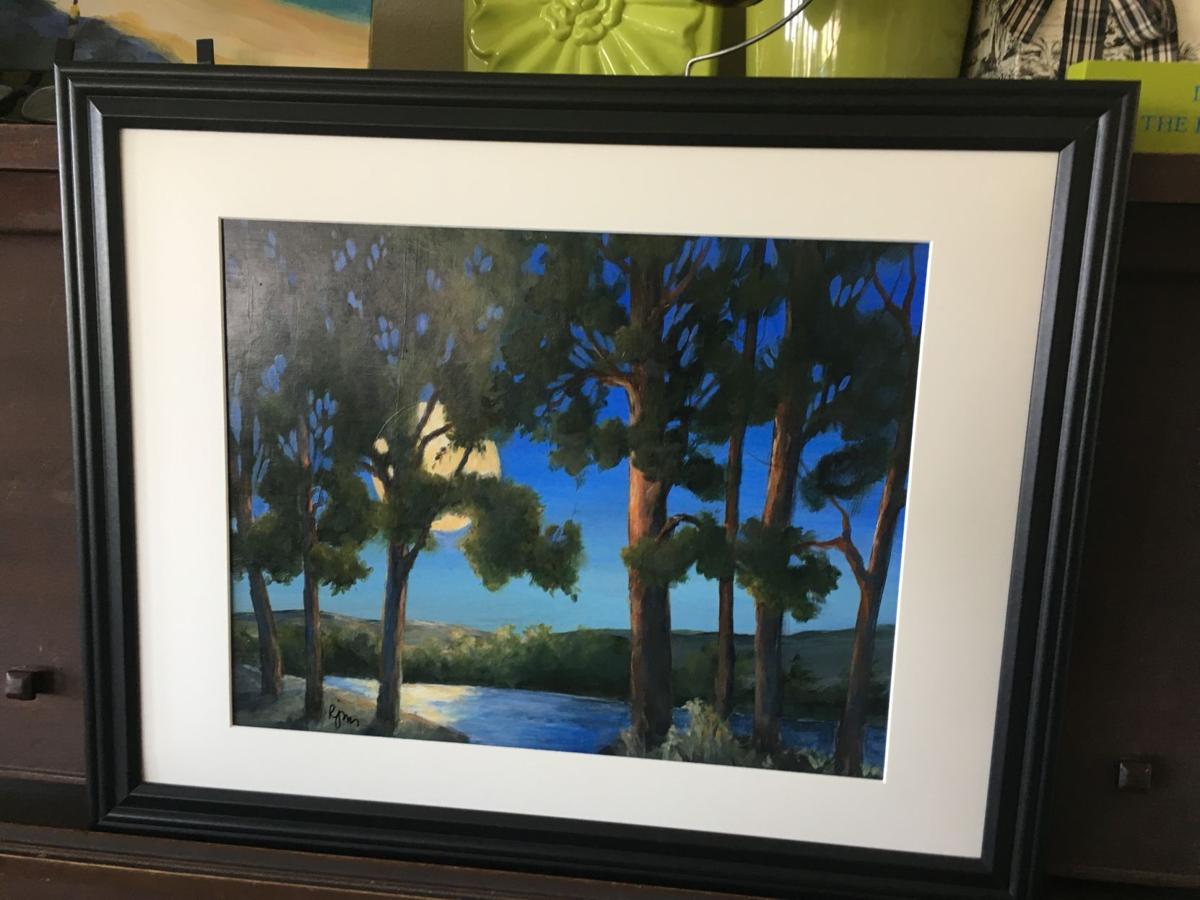 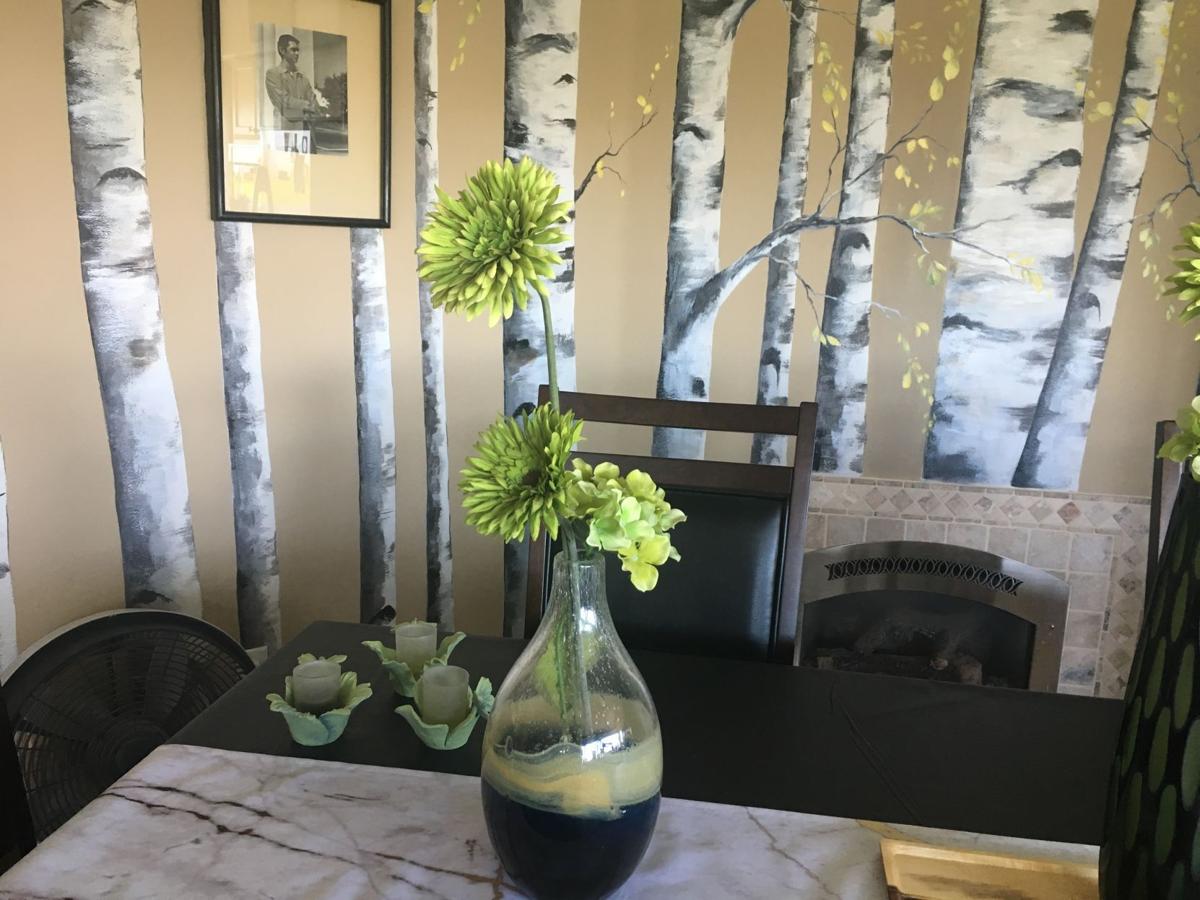 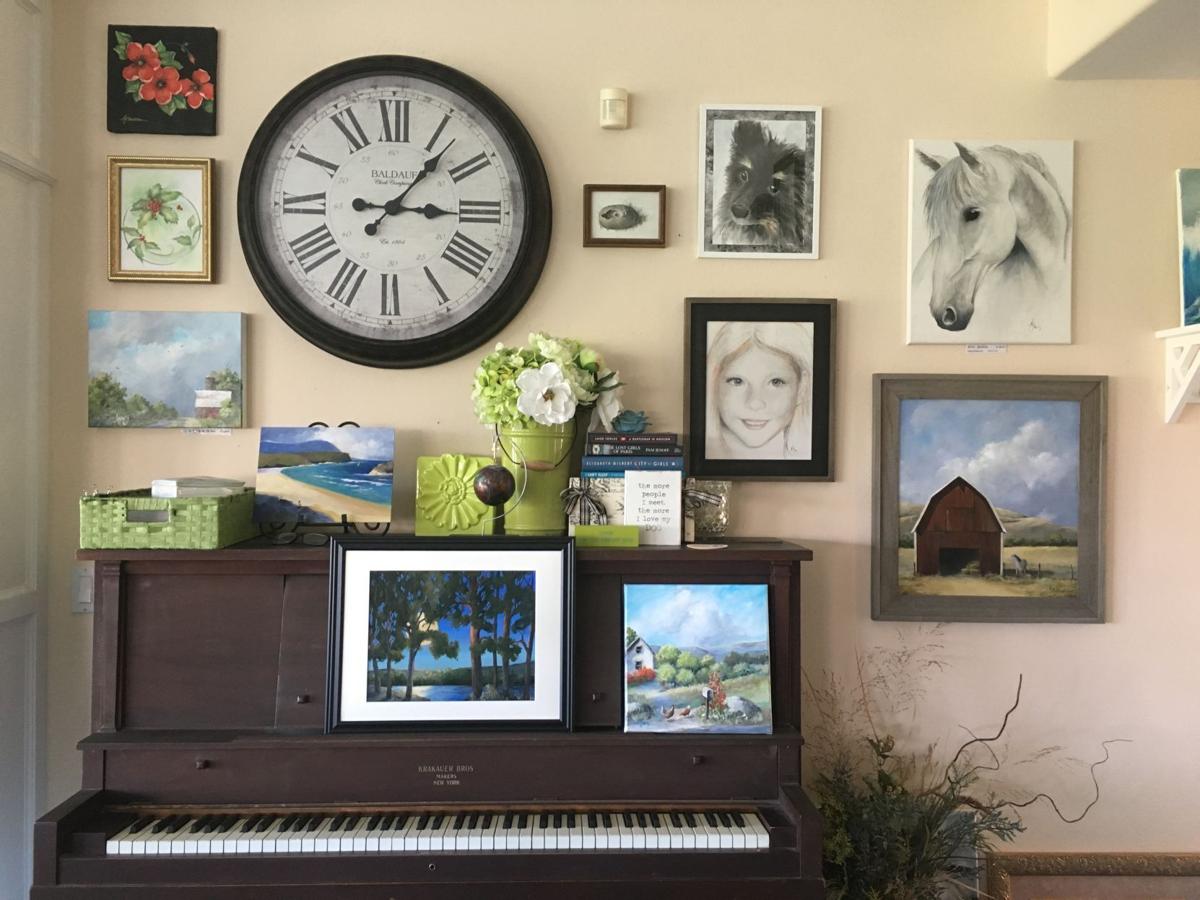 Melcher's art -- a portrait of her daughter, a beach with cresting waves, scenes of barns and trees, and animal portraits -- brightens the wall behind a piano in her home.

Melcher's art -- a portrait of her daughter, a beach with cresting waves, scenes of barns and trees, and animal portraits -- brightens the wall behind a piano in her home.

In Becky Melcher’s home, a wall of windows suffuses the living room with brilliant light while offering a sweeping view of the Yakima Valley. It’s a perfect setting for this local artist who has spent years trying to capture the essence of light in her favorite landscape paintings.

Whether she’s painting a bank of clouds framed by a vivid blue sky, an old barn set beside a flowing river, or a copse of trees bathed in moonlight, it’s a particular challenge to portray that light and, she said, the “color that is a result, such as an honest, a real green.”

Melcher, whose work currently adorns the walls of the Yakima Steak House and AntoLin Cellars tasting room, and who also has exhibited at the downtown Windows Alive project, has always been interested in art. With a mother who was a china painter, and an architect father, she recalls that, “growing up, I was just kind of always drawing and painting.” She has had little formal art instruction, other than a few china painting classes she took with her mother.

The Los Angeles native continued to dabble in art as she studied at San Fernando Valley State College in California and later moved to the Yakima Valley, where she worked for two law firms, doing deposition summaries and running a business office through the mid-1980s. In those years, she primarily created pencil drawings, sometimes with a watercolor wash.

“I still drew a lot, mostly florals, botanicals,” she said. “It was just for me because I liked to do it.”

By 1985, however, art took a back seat in Melcher’s life as she welcomed the greatest production of her life: tiny, newborn triplets born about three months prematurely. After a few health scares, her daughter and two sons did well. Now she can laugh when she recalls those early years of parenting, averaging about “two hours of sleep a night” and keeping a detailed log of the children’s eating habits.

It wasn’t until the early 2000s that Melcher finally found the time to roll up her sleeves and sit down at an easel. Today, she prefers to paint with acrylics: landscapes, animals and even some commissioned portraits of people, homes and nature scenes.

In 2008, she summoned her courage and submitted a landscape she had done for a juried art show at Yakima’s Larson Gallery. The piece was accepted, and with this validation, she began in earnest to let her artistic flair run free.

Now, in addition to the works she has on display at local establishments, her home is a virtual gallery of creations. A commissioned painting of a country scene rests on the floor, waiting for its new owners to collect it. A cluster of pictures, including a portrait of her daughter, a beach with cresting waves, scenes of barns and trees, and animal portraits surround a piano. A likeness of her dog, “Mardy Fish” (named in honor of a professional tennis player) looks down from above a doorway. And an assortment of paintings, including another seascape, a forest scene and a vase of flowers, decorate the wall above a wooden hutch for her “rescue rabbit.”

Even Melcher’s sunlit dining area offers a life-size nature mural she painted, with a small forest of birch tree trunks stretching from floor to ceiling. The only “modern art” in the house is not a painting, but a smashed tennis racket (once used by Mardy Fish) mounted on the wall — a souvenir of her passion for playing tennis.

As Melcher speaks of another painting of hers that’s been sold, she modestly jokes that she just sells her art so that she doesn’t “have so many left at home.” Yet, judging from her energy and enthusiasm, there are many more paintings to come from this self-taught artist.

“I’m always learning,” she said. “You don’t get finished. I like (painting) because it’s creative and it’s something you can keep learning about. I just love trying new types of creativity.”

Working mostly from photographs, Melcher will sometimes tire of one type of painting, such as landscapes, and switch to an animal portrait of a horse, for example, or a cat, dog or llama. However, she continues to gravitate back to landscapes, especially enjoying painting clouds with their “soft, blendable” qualities and the reflection of light on water.

“Light is really hard to capture,” she noted. “It’s elusive and ethereal, a huge challenge.” Even though she enjoys her art, at times it can be frustrating, she adds, when she’s trying to create a particular effect — or simply wondering what to do next, to finish a painting. “I’m pretty tenacious, though. If I keep trying, eventually I’ll get it.”