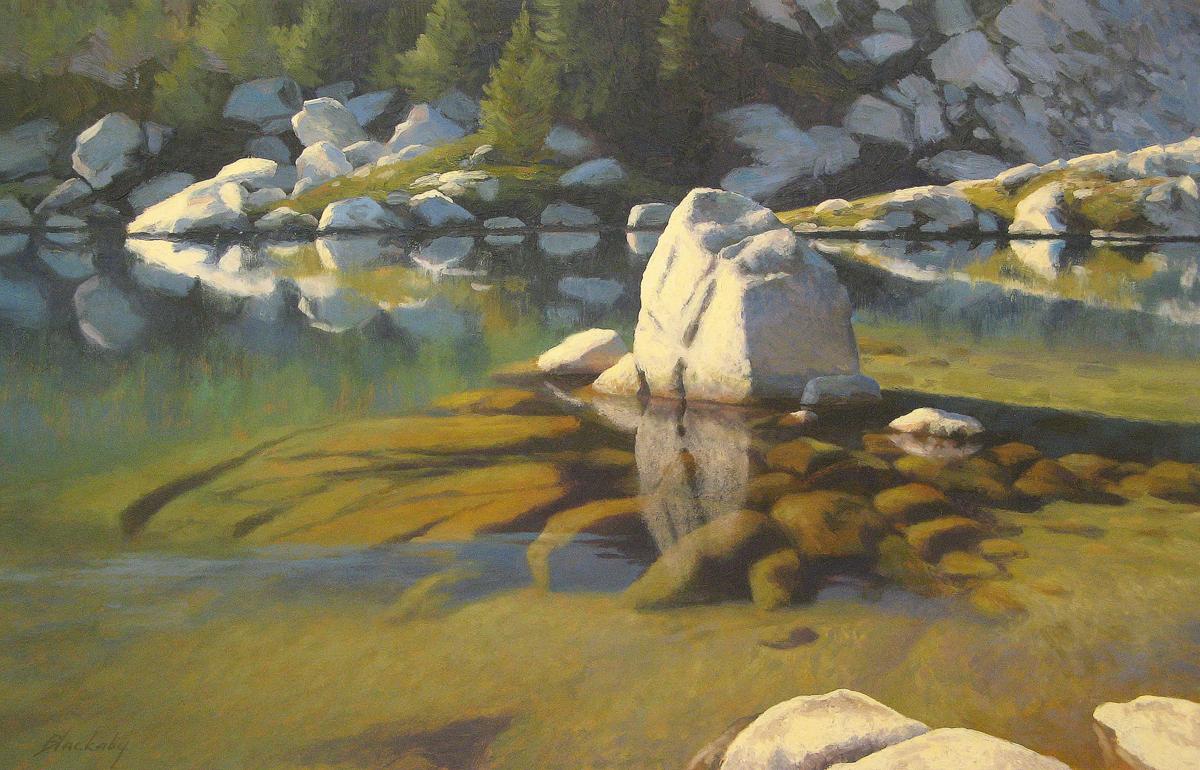 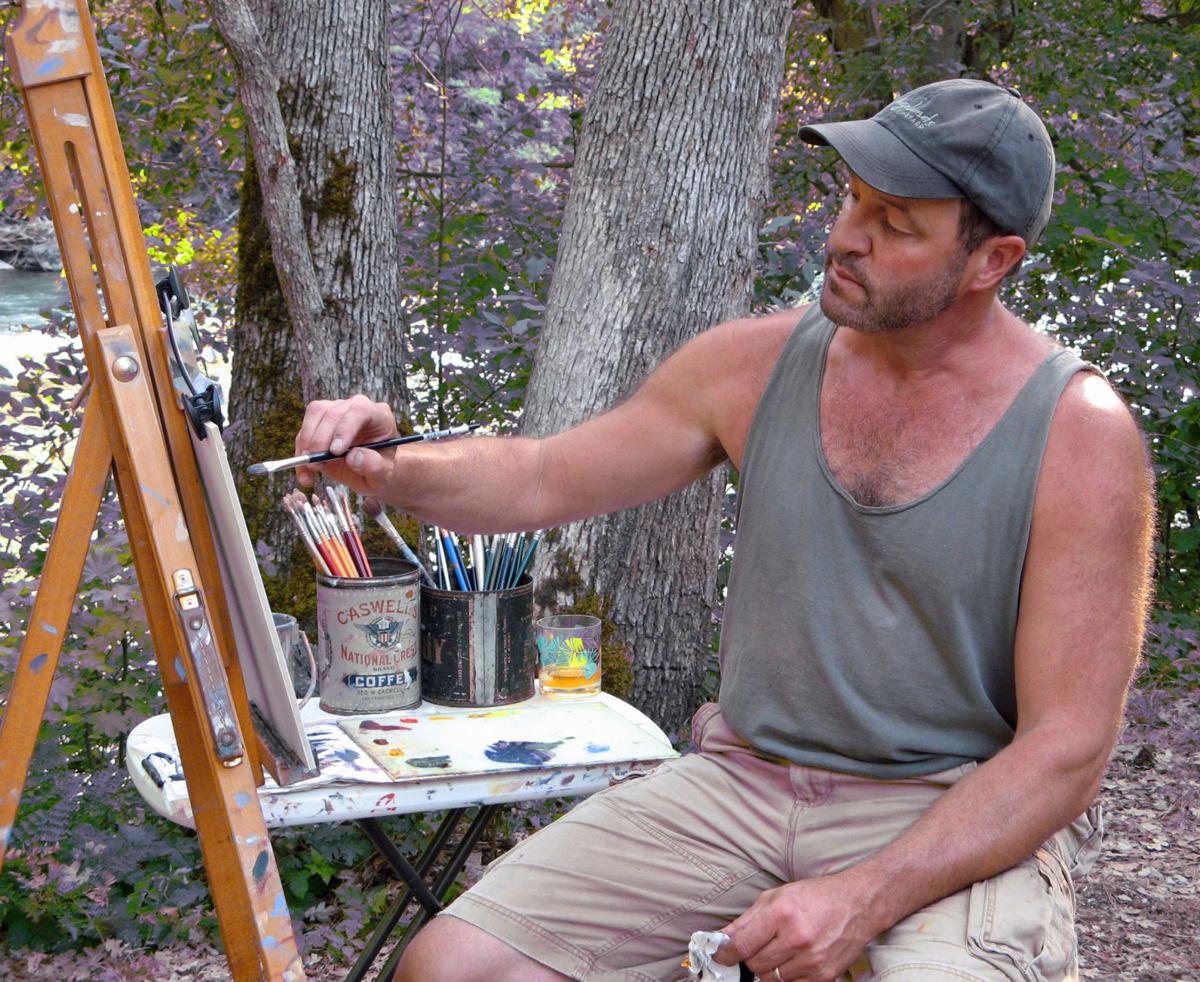 Rob Blackaby painting 'en plein air,' or painting outdoors. This skill is not easily mastered, as you must paint quickly to capture how the light hits your subject before the sun shifts. 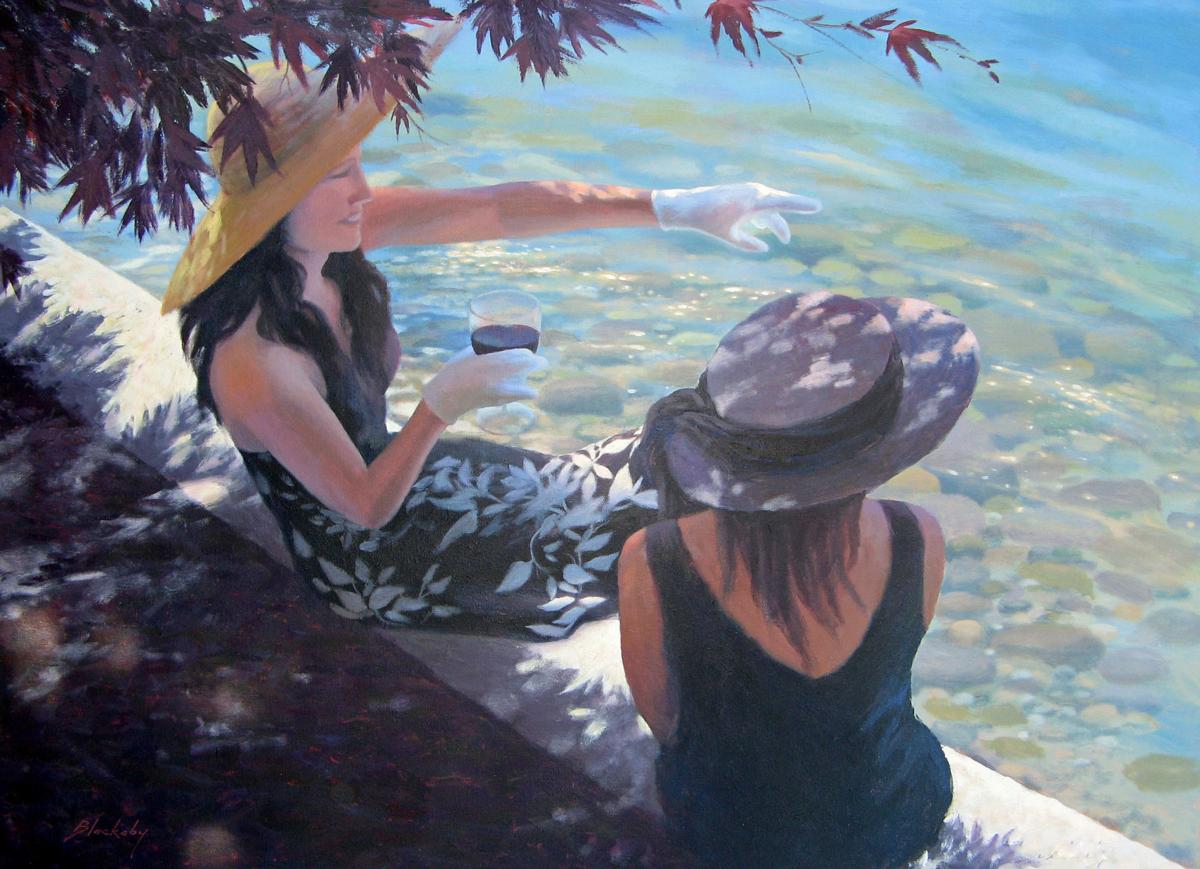 This piece, "Ladies of the Lake," has a French impressionist feel. 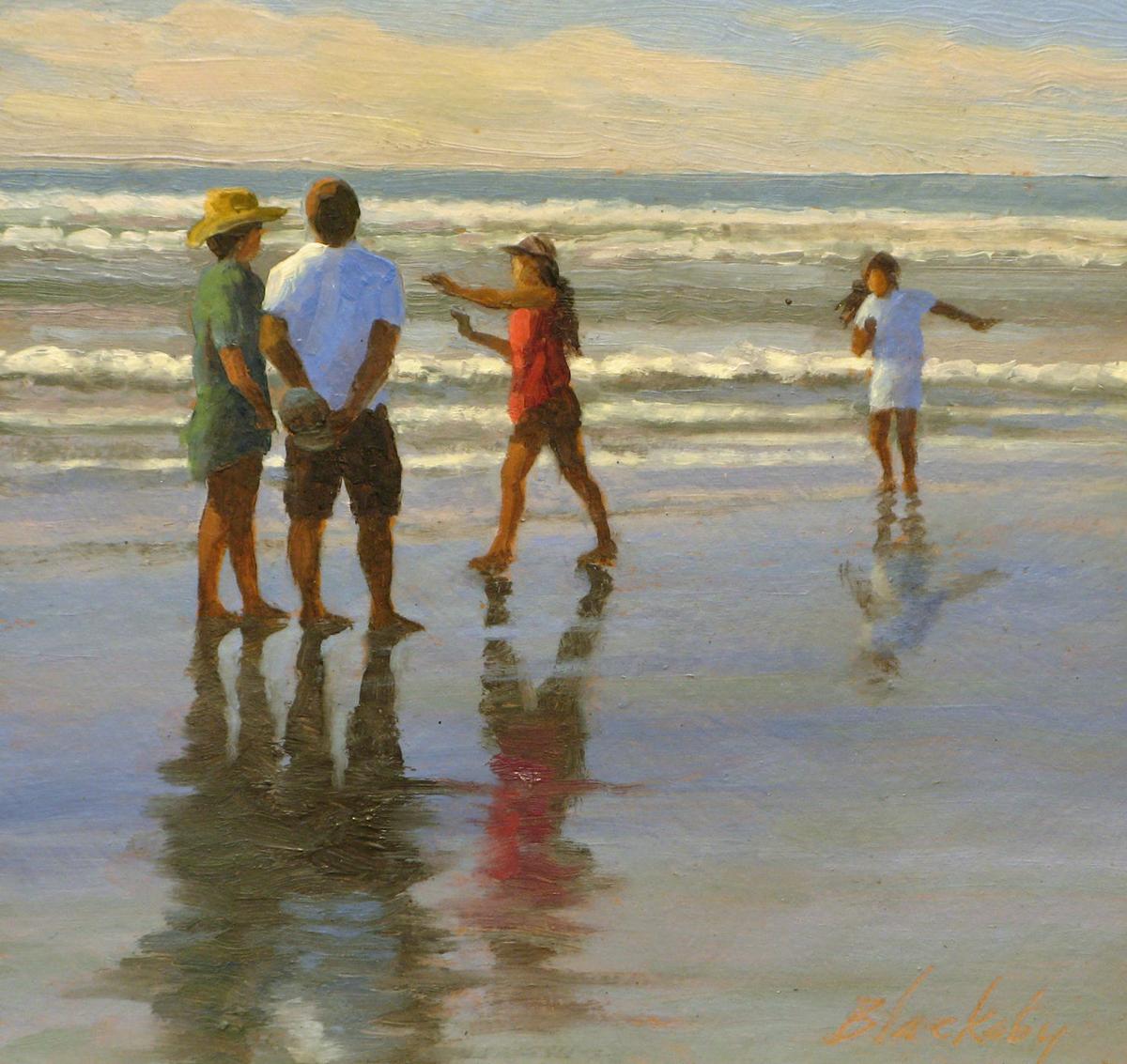 Water is difficult to portray, because it is both transparent and reflective. Rob has mastered the skill, and you'll find bodies of water in nearly all his work. 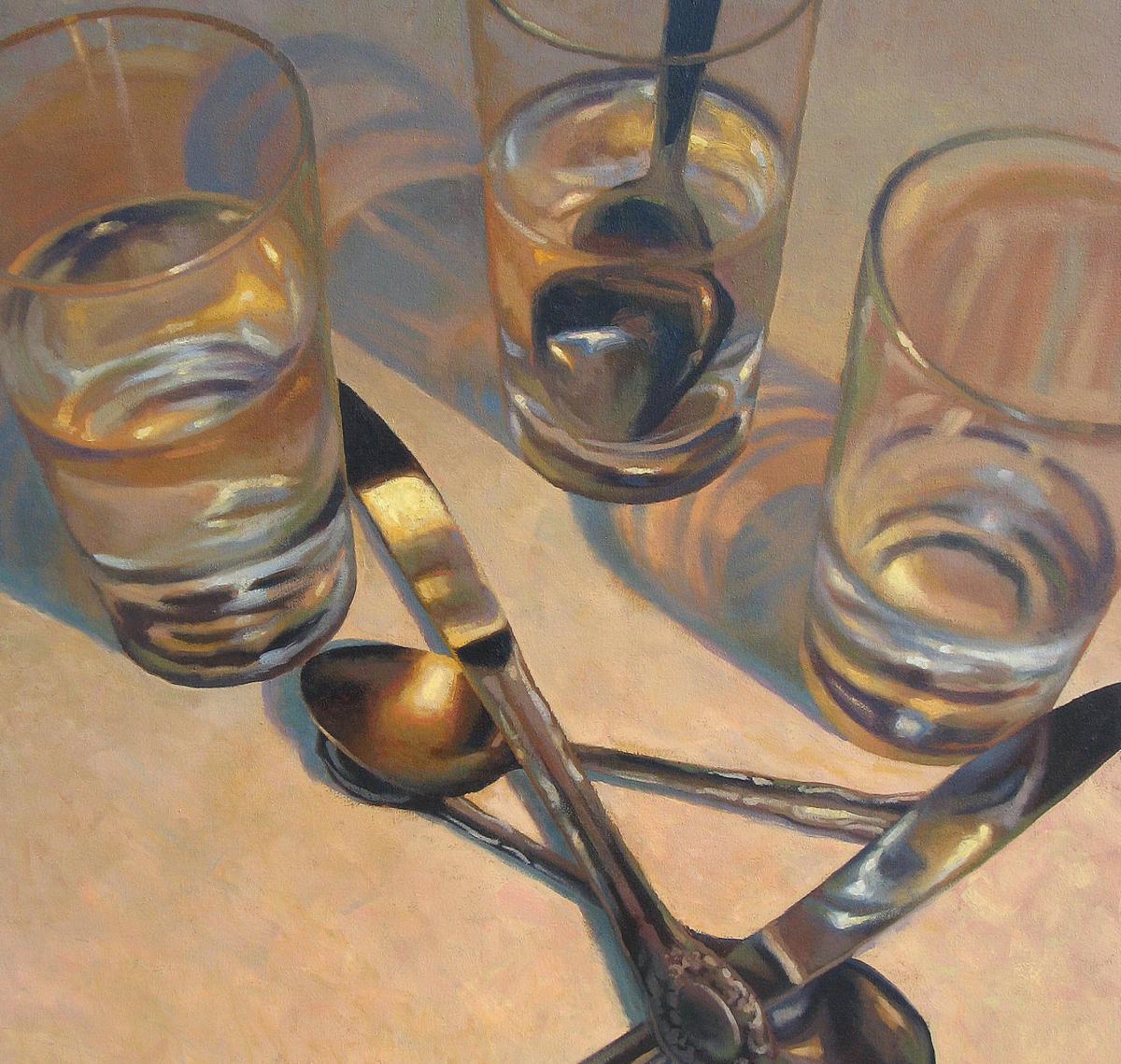 Rob's still life works are uncannily realistic. This one is "Favorite Color, Clear." 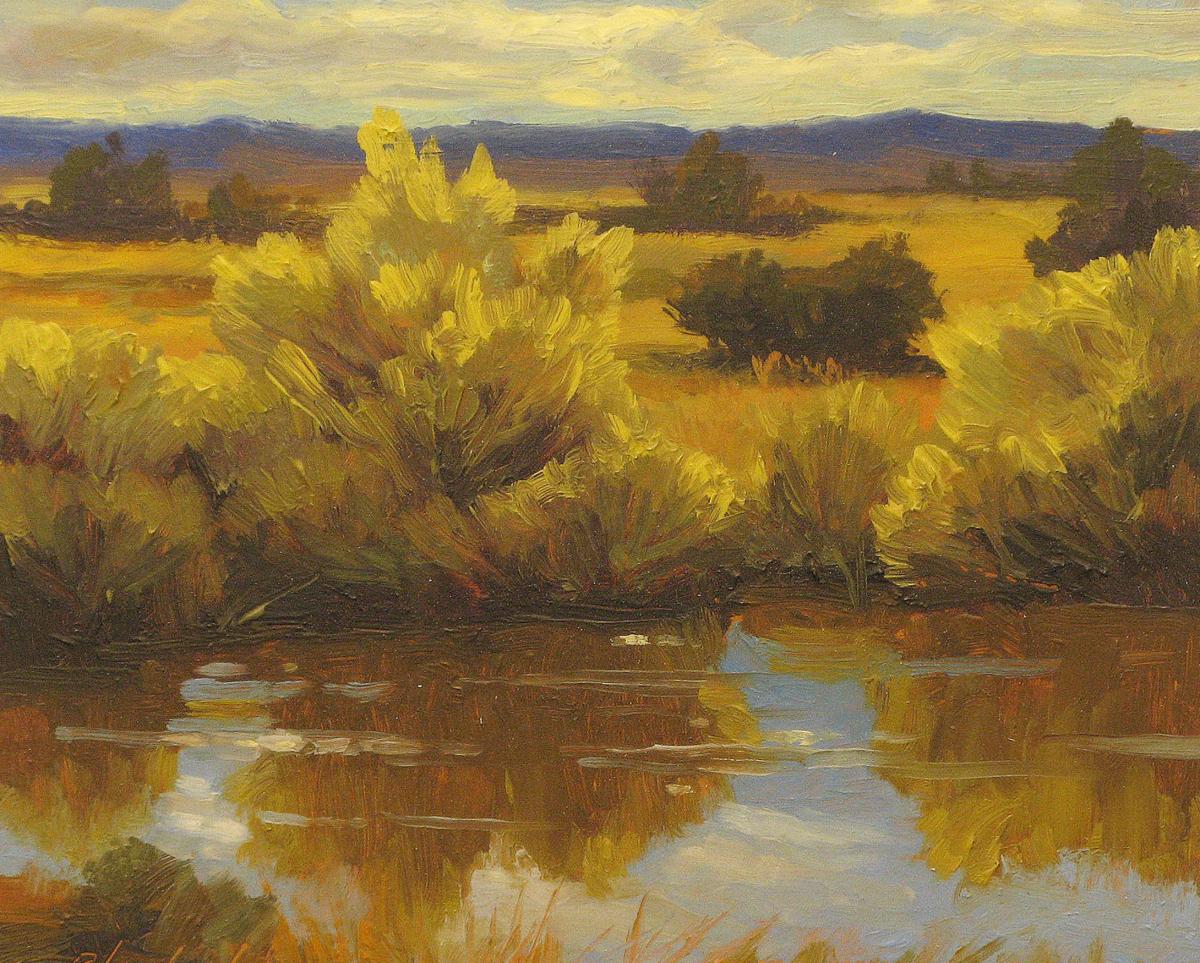 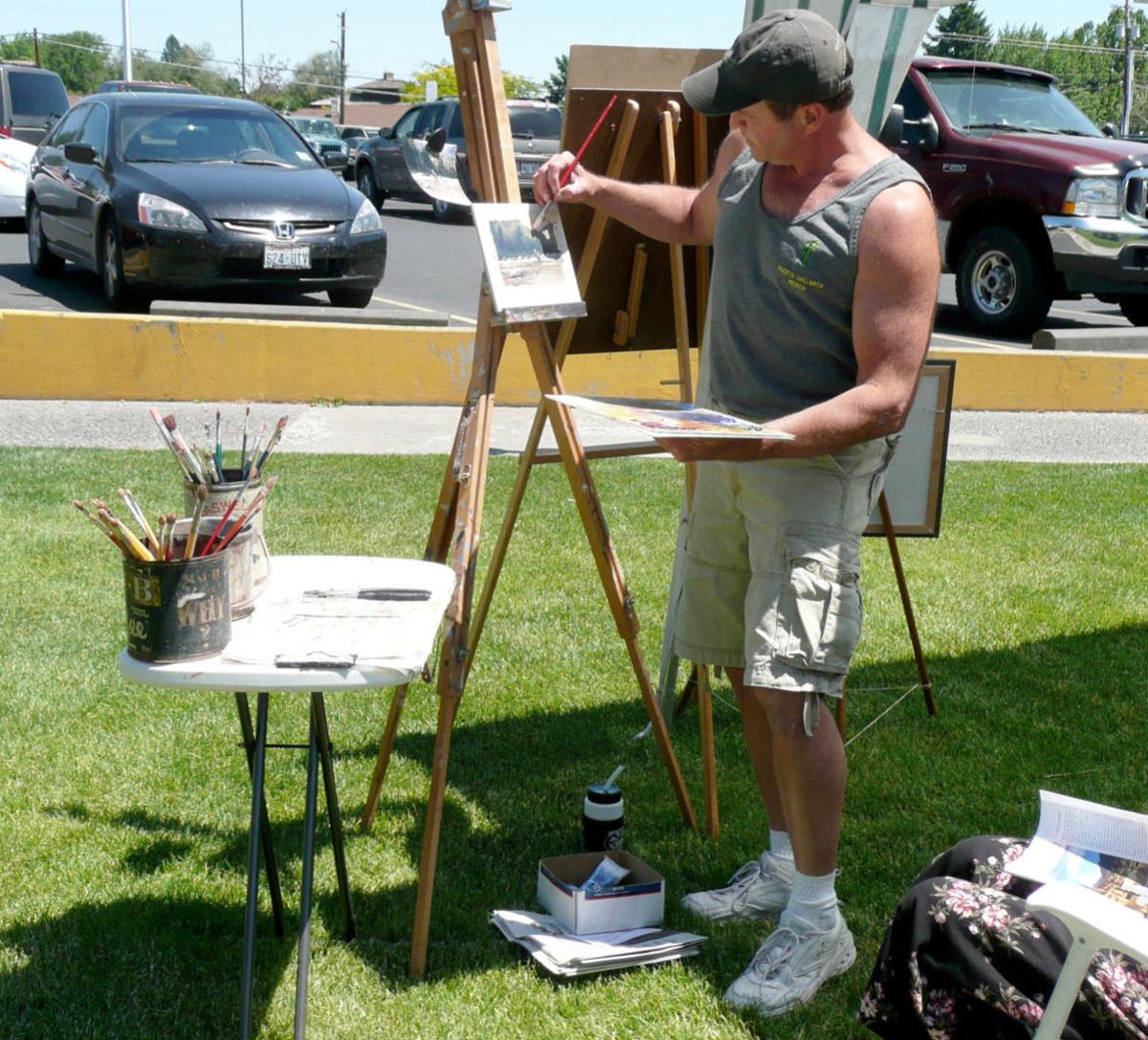 Rob studied commercial art and graphic design at the Colorado Institute of Art and worked at Lockheed Martin Aerospace in Denver. 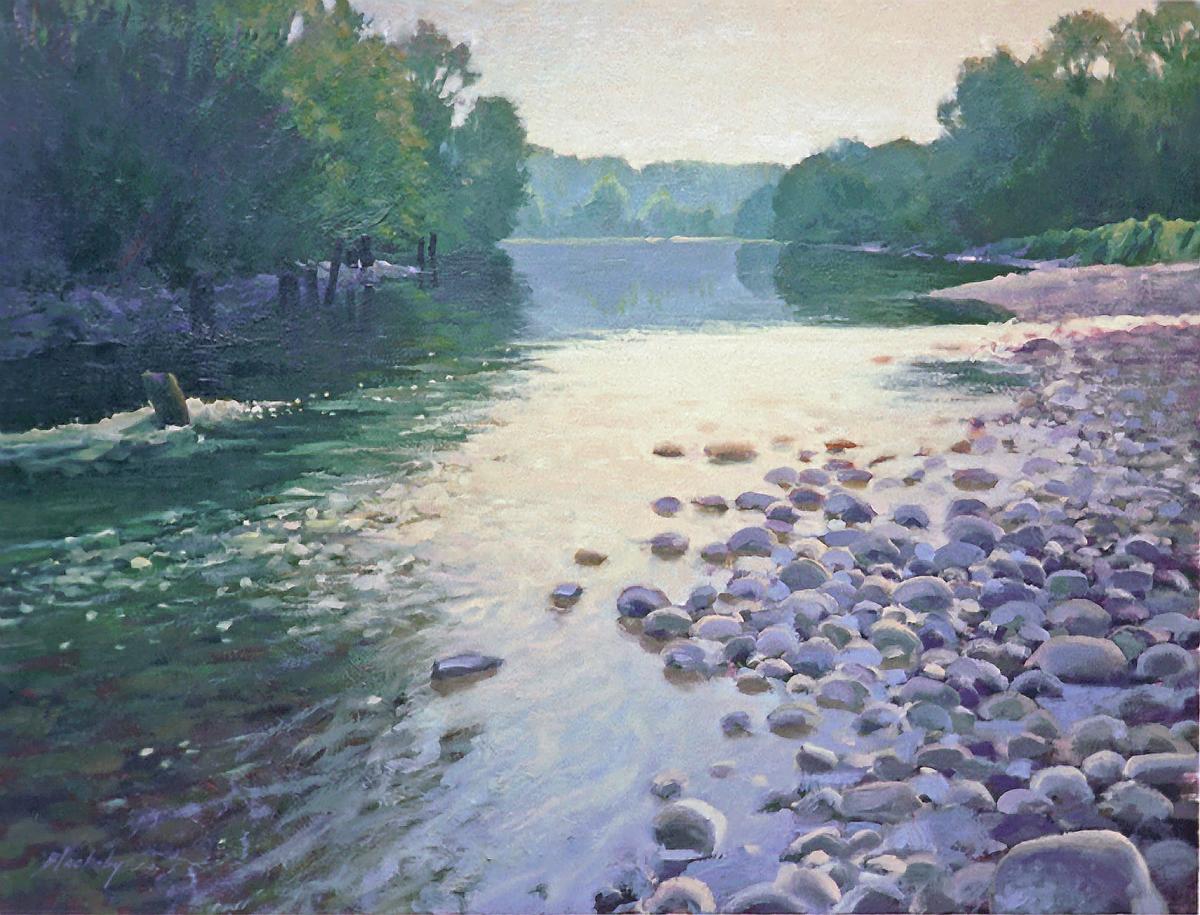 Rob Blackaby painting 'en plein air,' or painting outdoors. This skill is not easily mastered, as you must paint quickly to capture how the light hits your subject before the sun shifts.

This piece, "Ladies of the Lake," has a French impressionist feel.

Water is difficult to portray, because it is both transparent and reflective. Rob has mastered the skill, and you'll find bodies of water in nearly all his work.

Rob's still life works are uncannily realistic. This one is "Favorite Color, Clear."

Rob studied commercial art and graphic design at the Colorado Institute of Art and worked at Lockheed Martin Aerospace in Denver.

The creative child turned out pictures of hot rods, motorcycles and monsters, even “retouching” Biblical characters pictured on the church bulletin at times.

“The artwork just came about by accident,” observed Blackaby, 63, who for years has been a professional artist, living in Selah with his wife, Leslie. His impressionistic paintings of landscapes, still life and people have won multiple awards, with displays in galleries throughout our area.

A native of Mississippi, Blackaby said he lived a life similar to that of an “army brat,” growing up in four locations in California, then Chelan, Washington, moving with his family as his father accepted various pastoral assignments. After studying commercial art and graphic design at the Colorado Institute of Art, he worked at Lockheed Martin Aerospace in Denver. Before the digital age, he illustrated everything from a jetpack for Shuttle astronauts to Titan missile components.

However, as a self-described “right- and left-brainer,” Blackaby found that he wanted to put more “feeling and emotion” into his artwork. With an obvious talent for copying exact detail, he tired of people asking him, “Is that a photograph?” In 1988, he moved back to Washington state, deciding to become a full-time fine artist, working predominantly in oil paintings.

Over the years, Blackaby’s style has become “far more expressive,” allowing room for viewers to “read into his work,” he said. However, “I don’t want to lose the realism, so I’m walking a tightrope there,” he observed. Admiring the impressionist techniques of artists such as John Singer Sargent, Winslow Homer and N.C. Wyeth, he has created hundreds of semi-impressionist paintings in his own unique style.

The majority of Blackaby’s paintings are landscapes of Washington state. You can feel the coolness in the air in a quiet scene from the Alpine Lakes Wilderness, with water and rocks peacefully reflecting the light of day. The rising sun glimmers on the Yakima River and touches the surrounding hillsides with gold in another painting. You can sense the movement in the water below Silver Falls, as torrents gush past. And you can almost taste the flavor of succulent red grapes on a vine in Central Washington wine country.

The detail in Blackaby’s paintings is remarkable. He doesn’t like to hear it, but you do sometimes stop and wonder if a particular painting is, in fact, a photograph. Each branch of a tree, each reed in a river scene, the way the sun backlights a blossom is very realistic. Yet, spending a little more time with his work, another dimension becomes evident. There is a softness and light that adds more feeling to his scenes, that layers in a beauty which tempers some of the rough edges of nature.

Blackaby’s portraits of people also have that quality of expressiveness. You can see the wonder of childhood in a painting of a sunset at Cannon Beach, as two young girls wade into the waves, the breeze ruffling their hair and their dresses, caught in the innocence of the moment. A painting of a young boy captures his determined focus as he tries to keep a sailboat afloat on a lake, his father crouching protectively nearby.

Other paintings include still life images of fruit, flowers, glasses, cups and silverware, with the simplest subjects reflecting the same attention to detail. Blackaby has also painted numerous murals, ranging from a street scene for Central Washington Bank, to a Chamber of Commerce landscape of Lake Chelan with large apples in the foreground, and a horse-drawn wagon kicking up clouds of dust for Kelly’s Hardware, all in Chelan.

Which subjects does he enjoy the most?

“My favorite one is always the one I’m gonna paint now,” he said. Although, he acknowledges, with commissioned paintings, his hands are pretty much tied.

“You don’t have a lot of freedom to use your artist’s license,” he added with a laugh.

Some of Blackaby’s more unique commissions over the years have included painting a pet guinea pig and a request to paint a baseball for a woman who was married to a “baseball fanatic.”

His work has been displayed across the state, from the Larson and Oak Hollow galleries, Allied Arts Center, Yakima Cellars Tasting Room and the Fourth Street Theatre locally; to galleries, wineries and festivals from Ellensburg, to Chelan, Issaquah, Bellevue and Renton. He said he’s received at least 12 awards for his work, with honors bestowed from Yakima to Colorado. The award that means the most to him was a trip to Cape Canaveral in Florida to see a Space Shuttle launch and receive an honor for “moon base concept art” done for Lockheed. One of his paintings hangs in the Pentagon.

Currently, in the midst of the coronavirus outbreak, Blackaby, like the rest of us, said he’s “forced to stay at home far more.” But on the bright side, that gives him additional time to to remodel his home studio.

For some time, he has painted in his living room. Working from home does result in certain misadventures, he admits. When he refloors his living room, he’s considering just cutting out a section of the paint-splattered carpet over which he now works, continuing to keep it under his easel. He often stores his oil pallet in the freezing compartment of his refrigerator, to keep the paints fresher. That sometimes leads to sticky fingers as he or his wife reach in to get something and mistakenly touch the paints.

“You have to put in the time,” he advises them. “Some people don’t put in the time and never improve. You really have to commit.” There won’t be a finished piece every time you paint, he advised.

Among Blackaby’s future goals, he’d like to paint his idols: Sargent, Homer and Wyeth, to hang in his studio. He’d also like to publish a book on the subject of art composition.

Gradually edging toward retirement, Blackaby loves “having the freedom to keep experimenting and developing my abilities to paint,” he said. “Being an artist has been a fascinating path through life, mostly because of the question of ‘what is just around the next corner.’” If a call comes in, he can even paint a hot rod — reminiscent of his days as a child in church — except now, he can do it on commission!