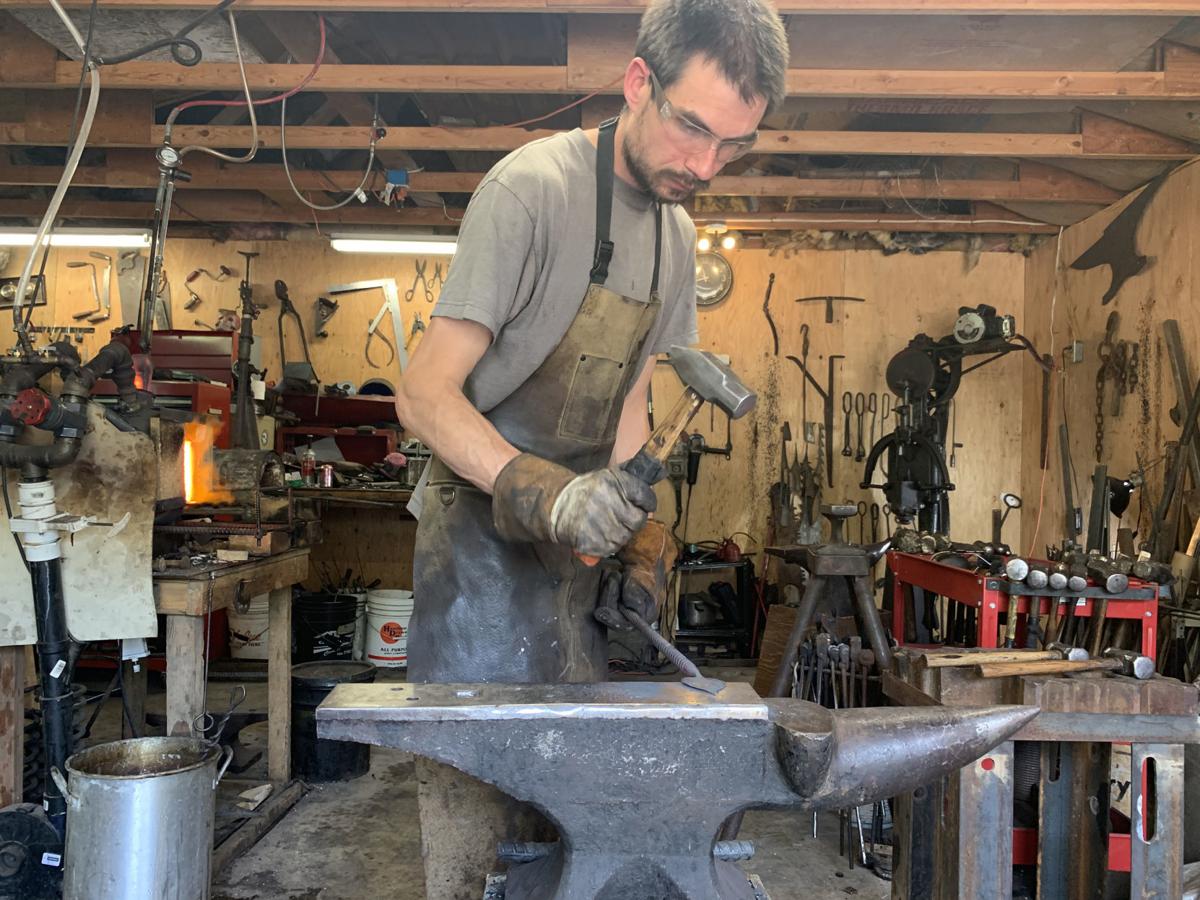 Joe in his Goldendale studio. “Since the power of iron was harnessed by humans,” he says, “we set down a path that drastically changed the way we interact with the world.” 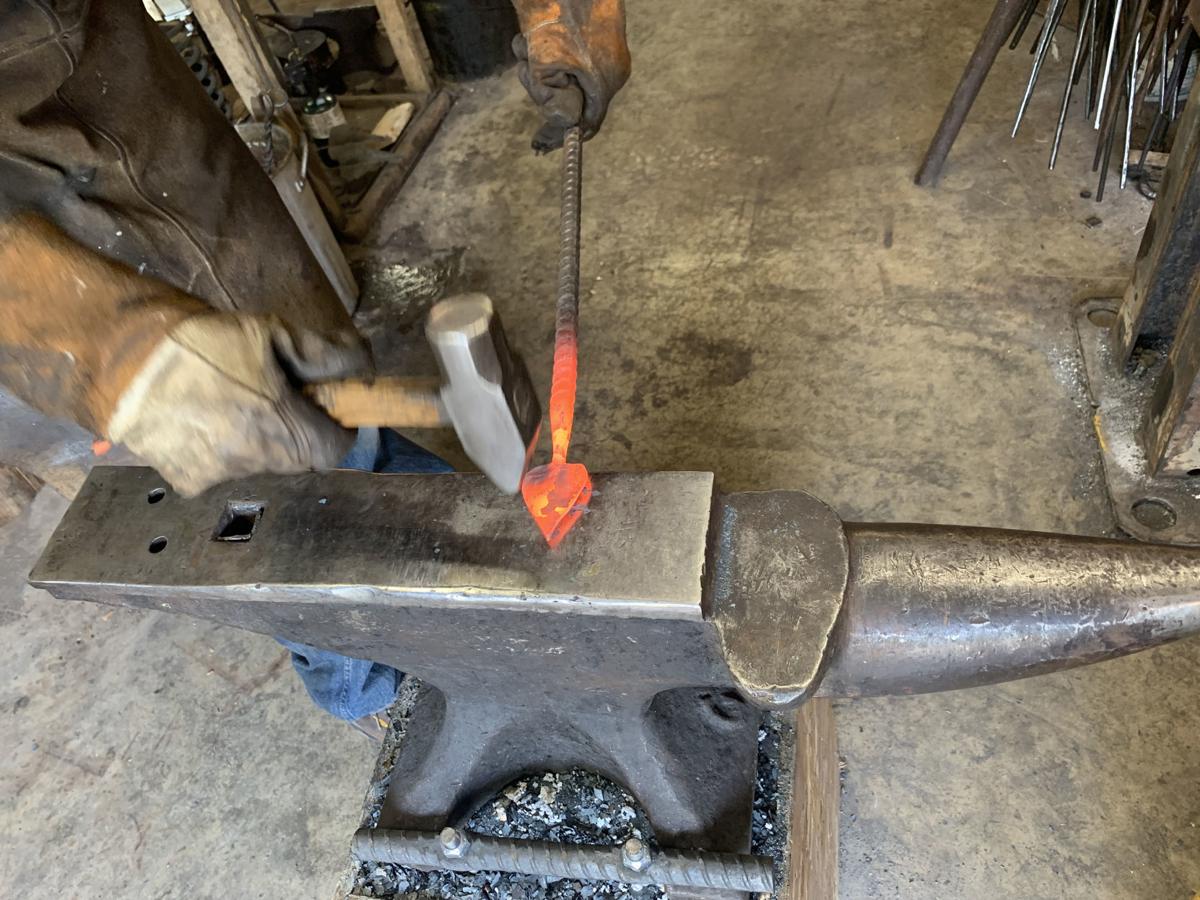 Working on a decorative leaf which is glowing red after just being pulled from the furnace. 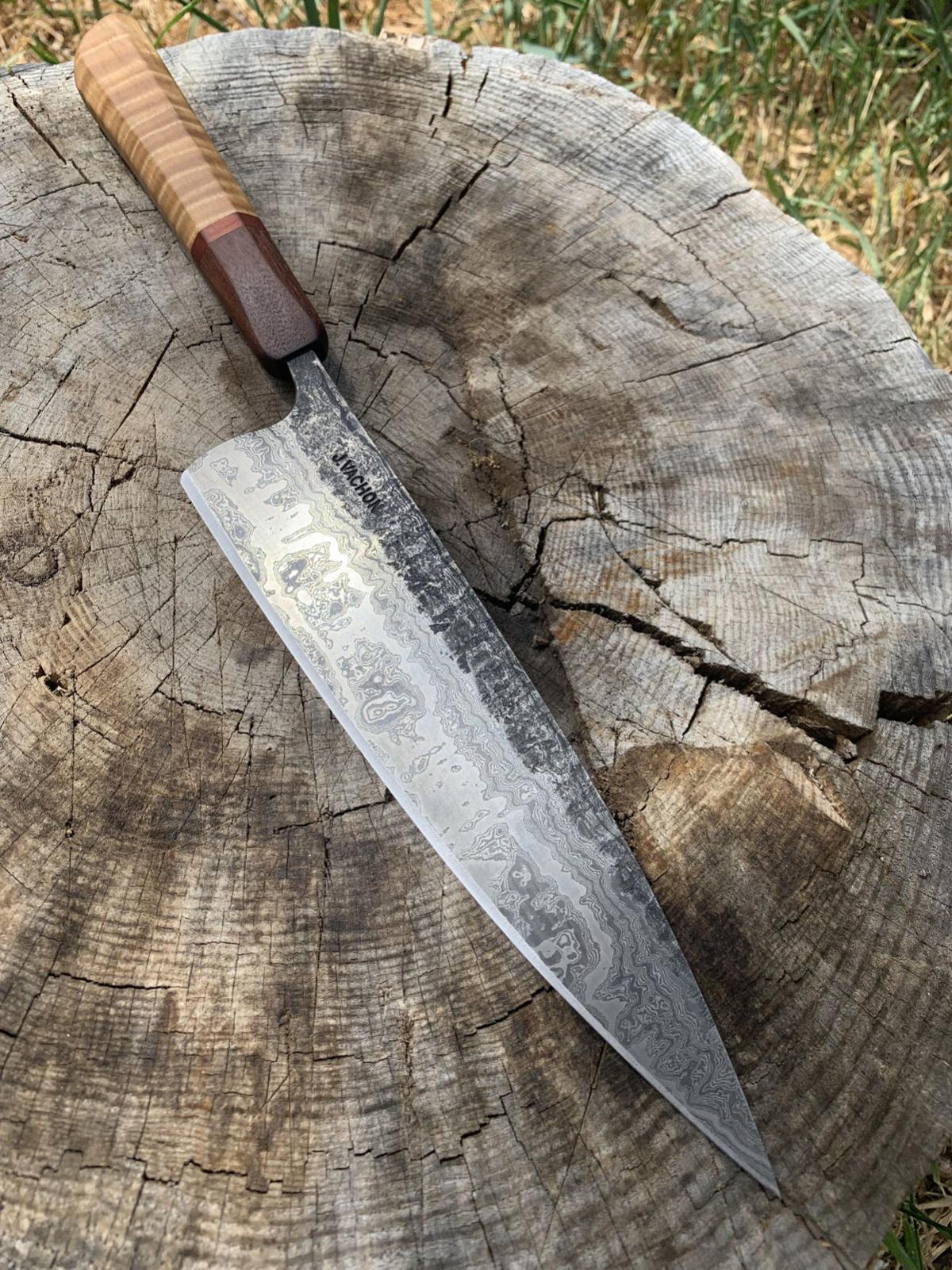 A Damascus steel kitchen knife. The undulating pattern on the blade is created by using layers of different high-carbon steels. It’s the most time-consuming thing Joe makes.

Our lives are becoming more entangled with technology all the time. Smartphones, Alexa, social media. Robots glide silently through Amazon warehouses and apples roll down automated conveyor belts, viewed by the eyes of a camera and sorted by machines instead of human hands.

All these things are shiny and convenient — but something’s missing. The joy of making something with your hands. Getting dirty. Doing work that makes your muscles ache and frees your mind to wander.

Now a movement is growing — to turn back the clock. Parents are paying life coaches to help them pry the screens out of their children’s hands. The coaches recommend simple things like giving the kid a ball to kick around or getting a dog. Millennials are embracing farm-to-table food and objects created by artisans.

Joe Vachon is one of those artisans. He is known as Joe the Blacksmith and he plies his trade in a small studio out back of his Goldendale home. He’s 35 now and he’s been a blacksmith since he was 22. He was in his second-to-last semester as a studio art major at Southern Illinois University when he took an Intro to Blacksmithing class. “It just totally blew my mind,” he says. “Definitely a life-changing thing. I got on the phone and called my dad after the first class, and he said ‘Oh yeah, your great-grandpa was a blacksmith in a rail yard, and his brother was a blacksmith in a shipyard.’” It was the first time Joe had heard that, and he had an epiphany. Blacksmithing was in his blood and this was what he was meant to do.

His instructor would take students to the scrap yard to harvest steel, because they didn’t have any money for new material. That was another aspect of the trade that inspired Joe. “You can take rusty old rebar, straighten it out, burn the rust off. Steel is nearly infinitely recyclable or re-forgeable.”

After graduation he went to work for D Acres, an organic farm in New Hampshire. He became an artist in residence who also taught elementary blacksmithing. They were logging with oxen and using hand tools for farming, so his skills came in handy. After a few years there, he apprenticed with a master bladesmith, who taught him the finer points of tool-making, heat-treating and bladesmithing. Then Joe bought a school bus and outfitted it to travel across the country, complete with a forge with a hand-cranked blower.

He drove across the U.S., stopping in Arizona, Colorado, and Eugene, Oregon for longer periods. It got old after a while, he says, “living out of a bus as a blacksmith is a grind. There’s no place in society where you fit. It’s really challenging. RV parks won’t allow you to set up, since you can’t prove a physical address. I wasn’t allowed on public lands, so I was always accidentally breaking the law and learning the law as I went, by getting in trouble. So I was ready for something different.”

That turned out to be a trip to Guatemala with two dozen like-minded adventurers, who planned to travel through Mexico and Central America doing projects and building things along the way. But it was poorly organized, and they ran out of money three months into a seven-month tour. Joe decided to drive back to the States with a woman he’d met and a stray dog they’d picked up in Guatemala. He ended up marrying her and moving to Goldendale. 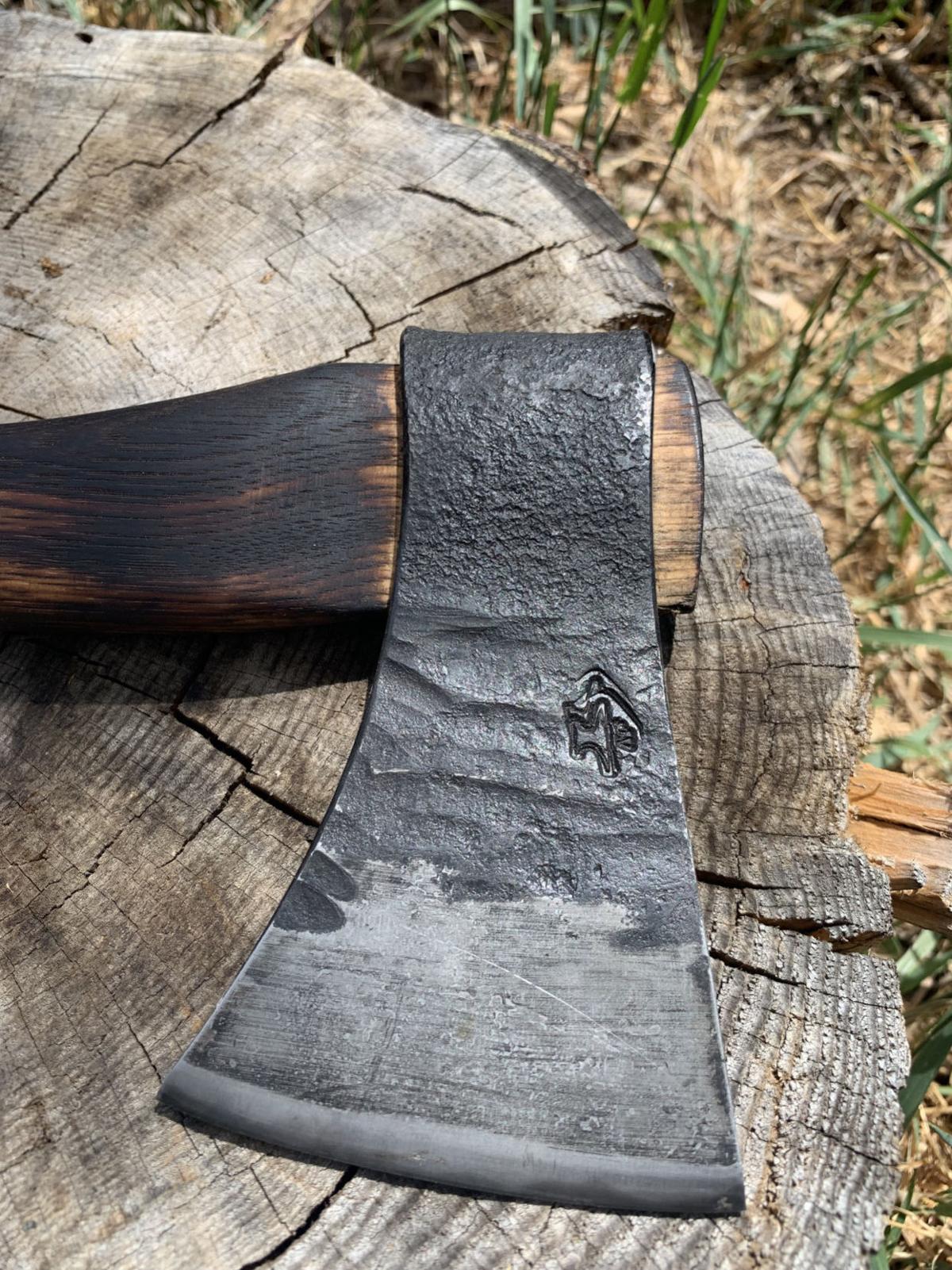 An ax Joe made. He doesn’t like to make his work too polished — preferring to leave the evidence that it was made by human hands. 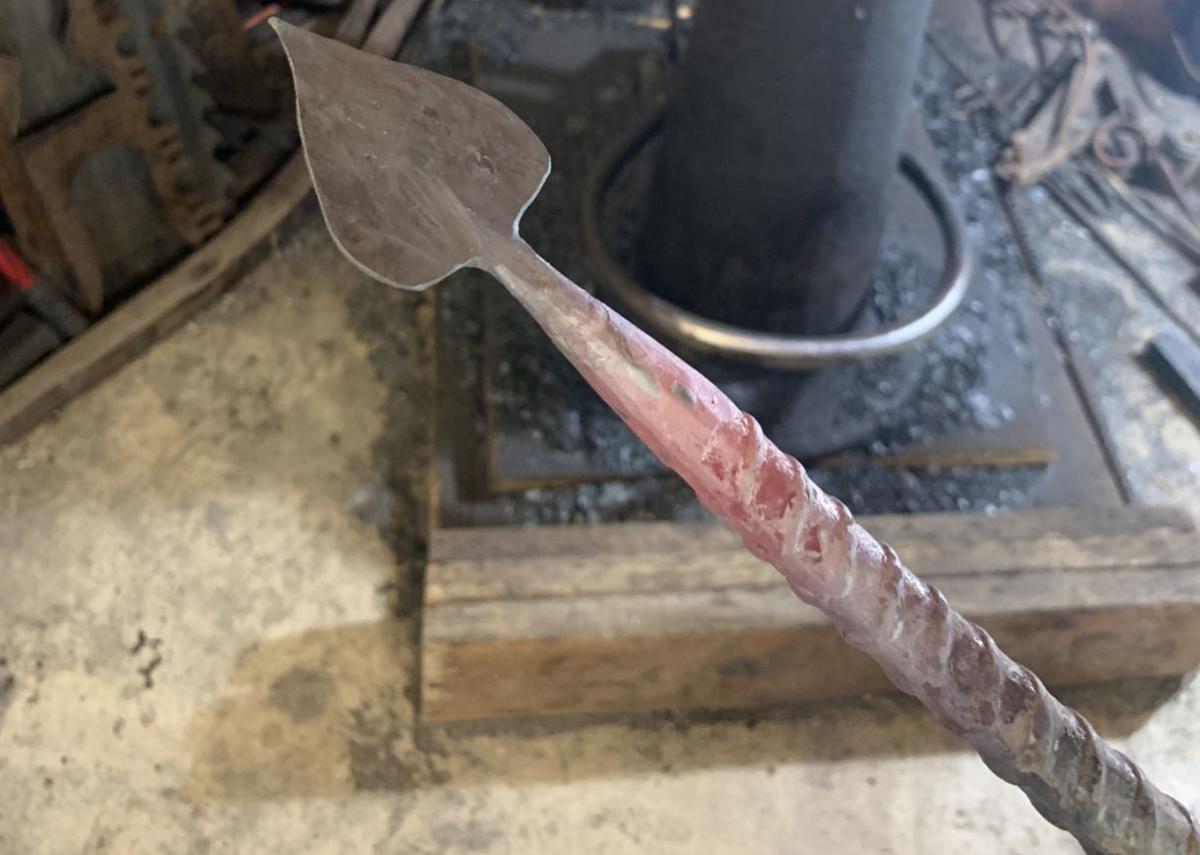 The finished leaf. Joe’s 1930s power hammer is in the background. It gives his arm a rest from time to time. 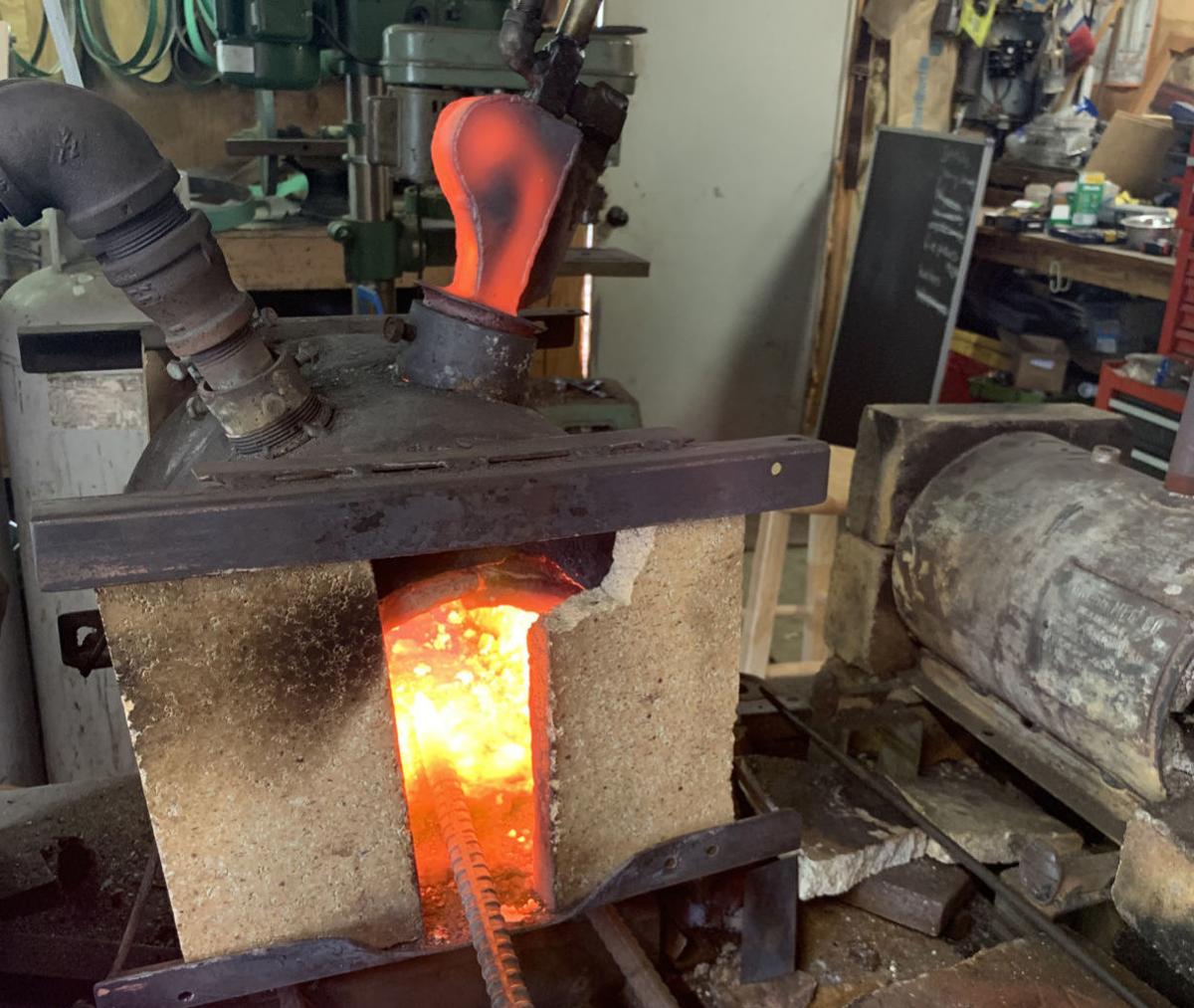 The forge furnace, which can reach temperatures of 2,400 degrees. It’s lined with a refractory material which reflects and increases the heat. 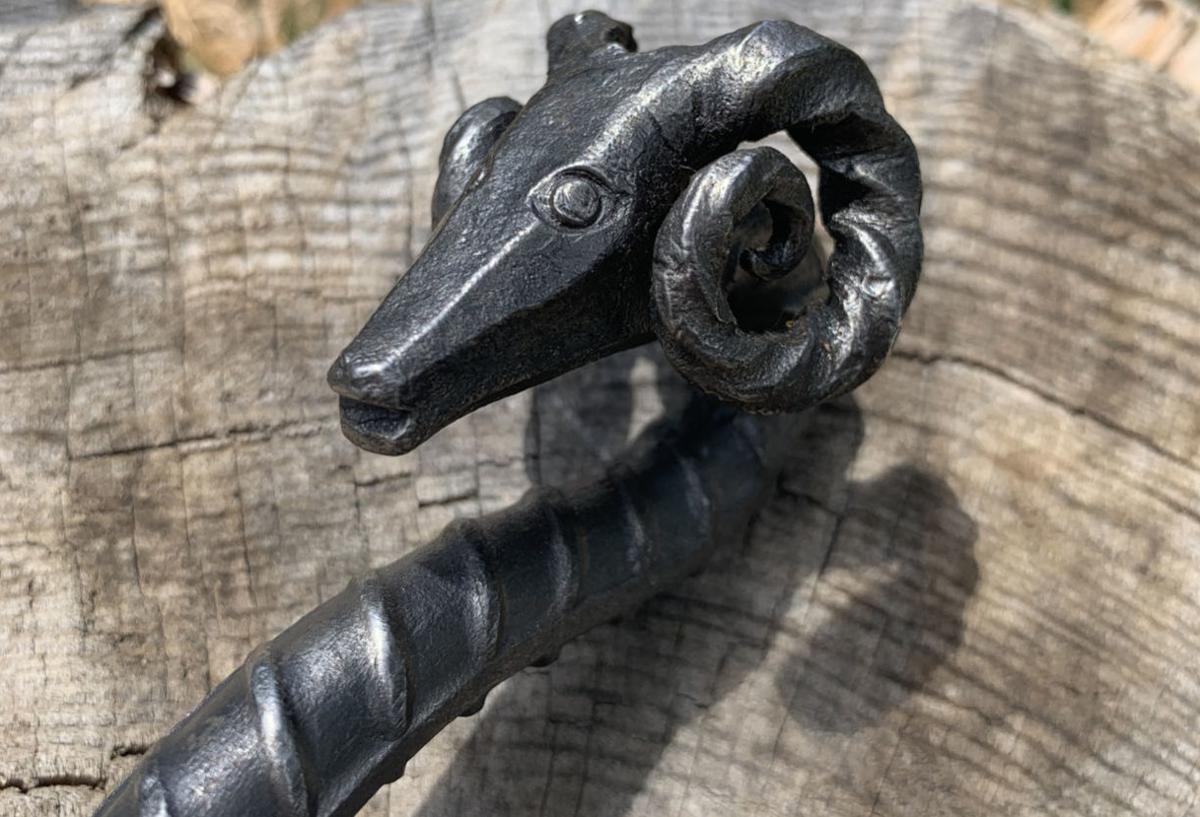 A ram’s head made from a piece of recycled rebar. 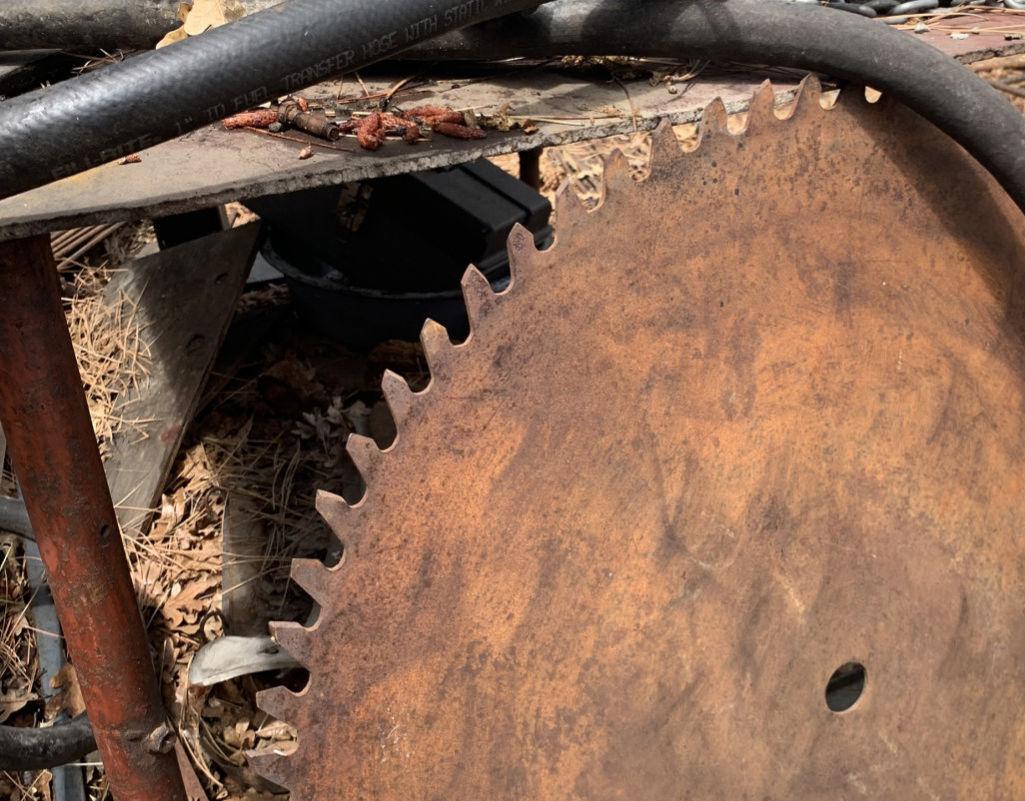 A rusty saw blade Joe will turn into something new. The rust burns off in the forge furnace. “Steel is nearly infinitely recyclable or re-forgeable,” he says.

The day I met him, he had just come home from a road trip, selling his wares at three shows in three weeks. He also sells his hand-forged items online, at joetheblacksmith.com. I asked him about the difference between iron and steel, and he replied, “Iron is a naturally occurring element, which by itself is kind of soft. When you add carbon to it, it hardens it up. There’s low carbon which is soft structural steel, then rebar which is a medium carbon steel, a little bit stiffer, then the higher carbon steels are tool steels, used to make axes, knives, and woodworker’s tools.”

We went out to his studio, packed with items waiting to be repurposed instead of rusting away — like giant round saw blades, band saws from an old lumber mill and barrels full of rebar. He makes his own customized work hammers out of rusty axle shafts. He grabbed a piece of rebar and fired up the forge furnace with a blowtorch, adjusting the flow of propane and waste vegetable oil, which he buys from nearby restaurants. Soon, the furnace was glowing yellow and orange and he placed the stick of rebar inside. The forge can get up to 2,400 degrees. It wasn’t long until the tip of the rebar turned an incandescent red and he pulled it out with leather gloves, placed it on the anvil and started hammering. After a few dozen blows, the metal stopped glowing and he put it back in the furnace. When it’s red it’s malleable, but if it cools down, there’s a danger of cracking. Time after time he reheated it and hammered it and in about 15 minutes he’d created a beautiful leaf shape, to be used as decorative piece.

“I utilize a lot of techniques that large manufacturers can’t replicate, so that’s unique,” he said. “I like to bring in a lot of historic elements as well.” Kitchen knives are his favorite thing to make because everyone uses them. They’re the most challenging and time-consuming things he creates. He sells many to chefs and they’re his best sellers, followed by fireplace tools, various hooks for the house, and barbecue tools. His products range in price from $35 for a bottle opener to $600 for a nine-inch Damascus steel knife with a handmade wood handle.

Damascus steel has layering of different high-carbon steels, which creates a beautiful pattern in the metal. He stamps his name into all of his products and leaves some of the rough marks of their creation, because he wants to allow people to reconnect with history. “I’m not one to overly polish my work. I like to show the evidence of the work a little bit,” he grins. “A lot of the products we live with and we buy are manufactured and they’re kind of sterile. I want to make things for people that get them excited. Maybe they get to see an ax and they’ve never held an ax before … at the end of the day, I’m romanticizing things.”