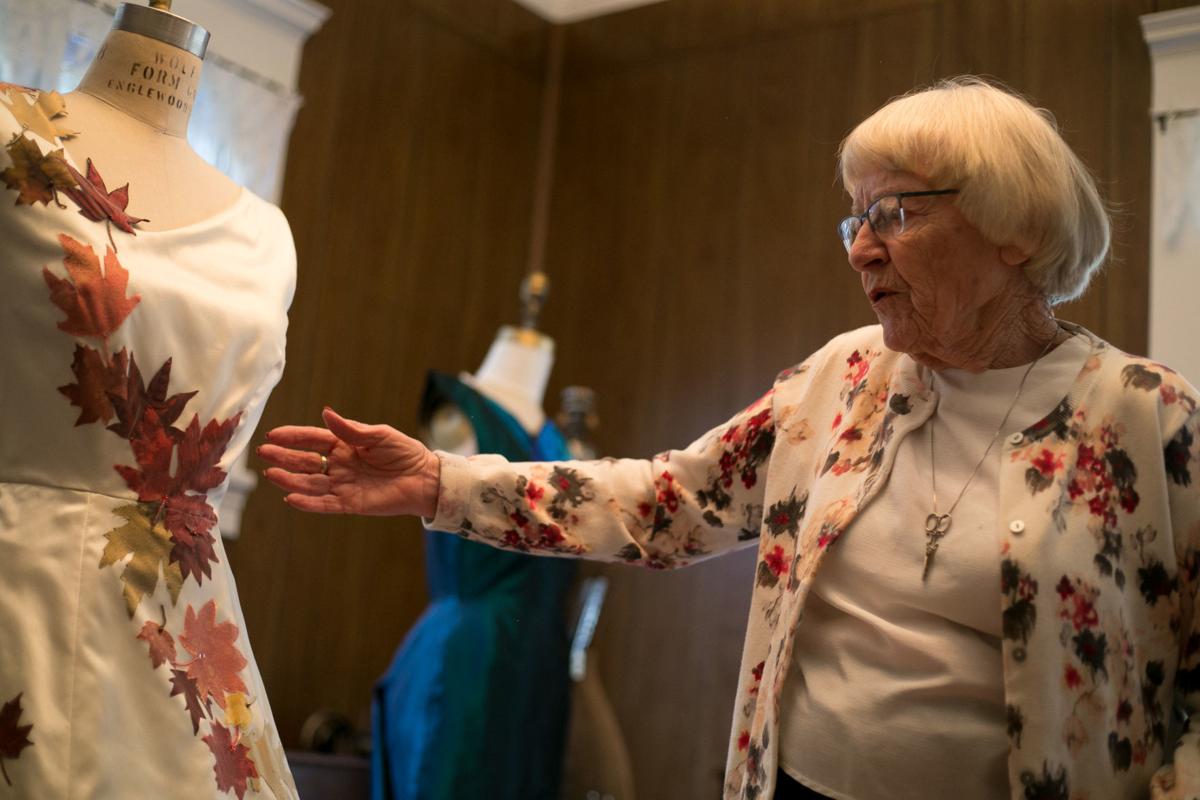 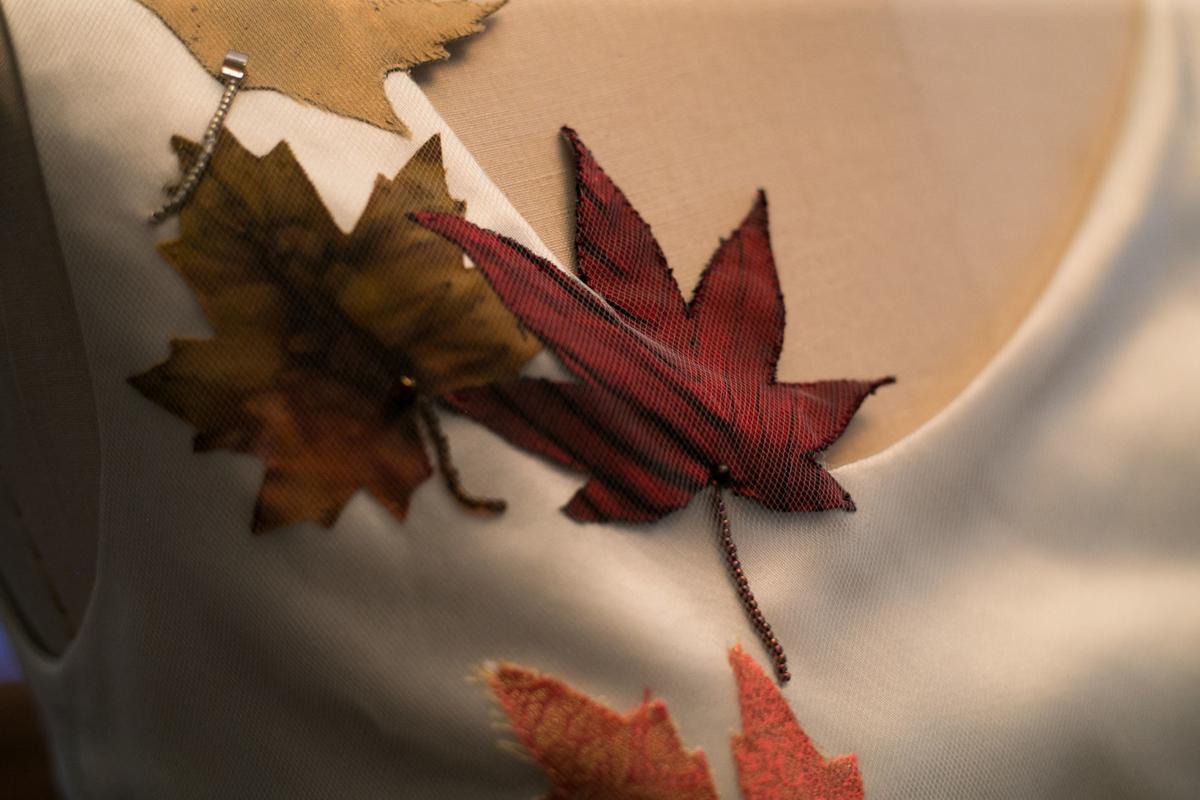 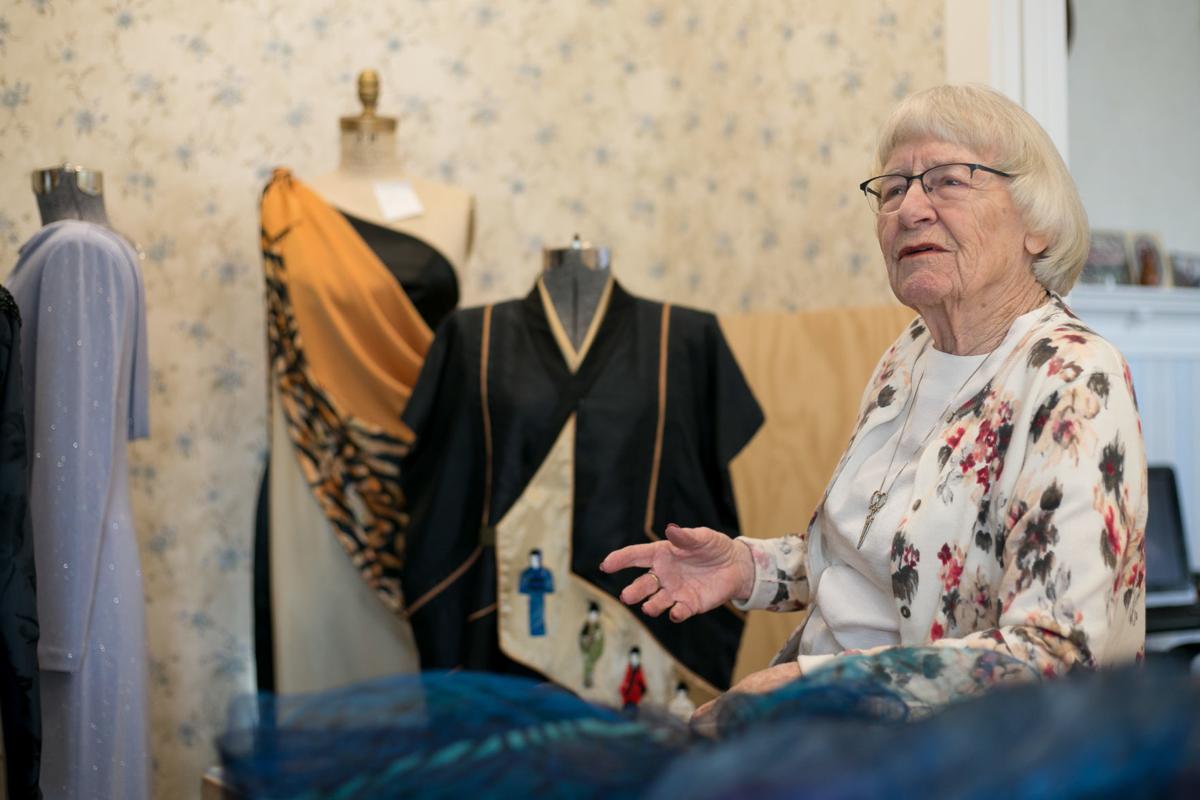 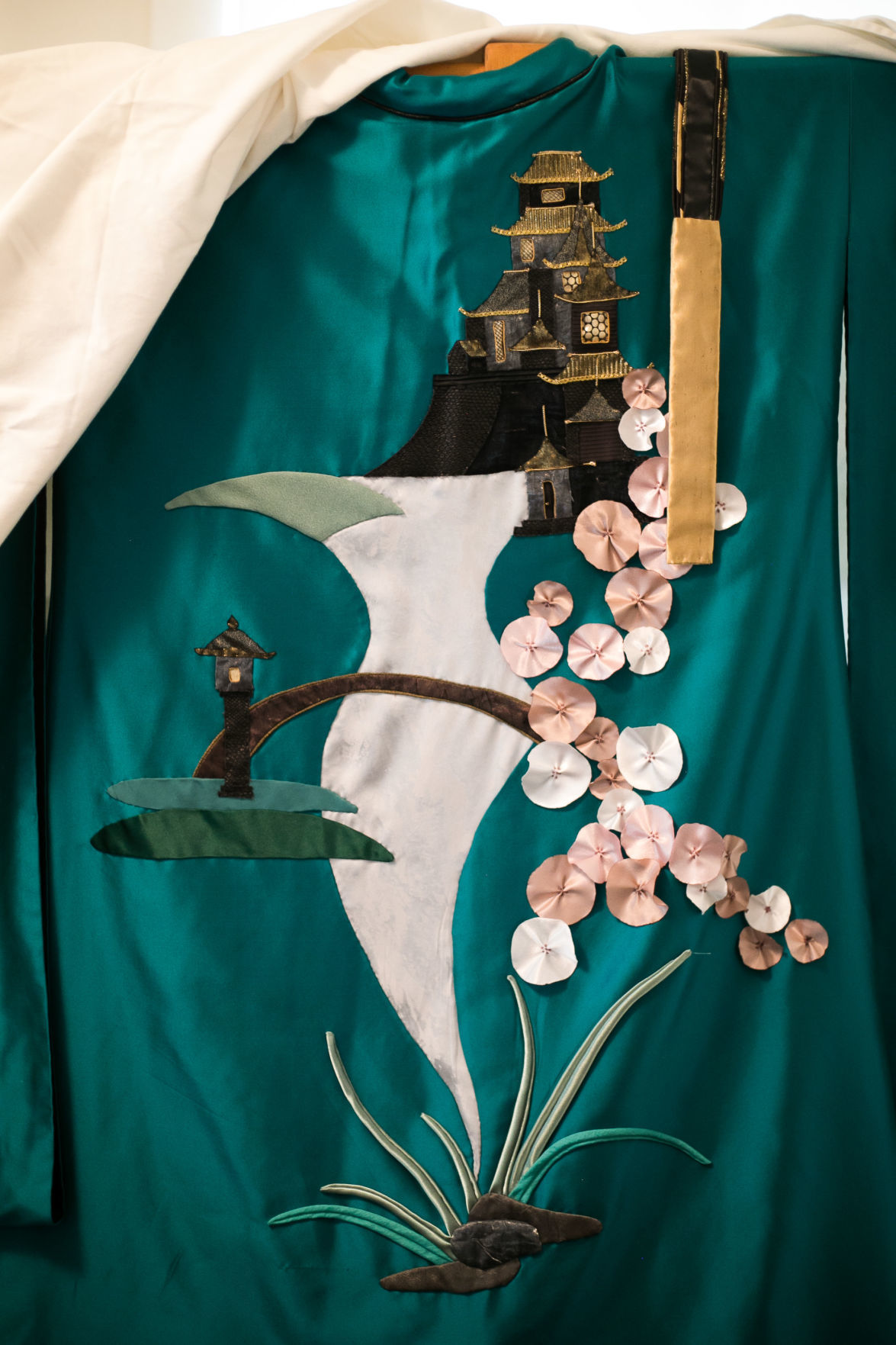 The back pattern of “A Japanese Garden” kimono created by Carolyn Schactler, former director of Central Washington University’s Apparel Design Program, Wednesday, Feb. 5, 2020, at her home in Yakima, Wash.

The back pattern of “A Japanese Garden” kimono created by Carolyn Schactler, former director of Central Washington University’s Apparel Design Program, Wednesday, Feb. 5, 2020, at her home in Yakima, Wash.

During a visit to Italy in 1996, Carolyn Schactler wanted to get a closer look at an elaborate 15th-century garment on display in a Florence museum. Slipping past the velvet ropes surrounding it, she scrutinized its organ pleats.

“I had done it just about right,” she said of the long rounded pleats that resemble organ pipes. Schactler had incorporated organ pleats on the back of a long coat she designed and made.

Her coat, which she titled Fifteenth Century Rainbows, won the Best in Show award at the 1995 International Textile and Apparel Association competition. It was one of several national and international apparel design awards Schactler received in the 28 years she was a professor of apparel design at Central Washington University in Ellensburg.

The coat also caught the attention of a Yakima Valley Museum supporter, who wondered if Schactler might donate it for auction at the museum’s annual Red Into Black fundraiser. But a closer look at the garment convinced museum officials it wouldn’t be enough. Schactler’s artistry deserved its own exhibition.

“To put a piece like this in our auction wouldn’t do it justice,” said Susan Duffin, director of development and board relations for the museum.

Carolyn Schactler Couture, which opens May 9 in the Gilbert Family Gallery, will feature Fifteenth Century Rainbows and 19 other outfits by Schactler on dress forms, along with 21 life-size photos of other designs by Schactler.

Eleven of the designs on display will stand on motorized platforms and rotate slowly, like life-size music box ballerinas. That will provide visitors a complete look at Schactler’s creations, many of which are just as elaborate — or even more so — on the back.

Heath Lambe, the museum’s curator of exhibits, and Schactler will start building the six-month-long exhibit in April, after a display of Bill Brennen paintings closes in March. Though Lambe and Schactler have designed the layout, they have already changed it and will continue to adjust as late as necessary.

“There’s a lot of prep for this show,” Schactler said.

Over the years, she has created clothing and accessories of stunning intricacy inspired by centuries of fashion. The exhibition will feature her original designs, but Schactler has also made reproductions of outfits from around the world, ancient to modern.

It all happens without a single sketch. “I do it in my head. It’s just always the way I’ve done it,” she said.

Born in Utah, Schactler began sewing in second grade. By that time her parents, Leo and Ila Fife Campbell, had moved their family to Pullman so her father could get a doctorate.

Her parents were excellent sketch artists and her mother was very creative, Schactler said. Her mother, who graduated from Utah Agricultural College (now Utah State University) with a degree in home economics, started her daughter mending dish towels. By the time Schactler was in high school, she was making clothes for her mother, but didn’t see it as a full-time career.

“Sewing was just something I did,” she said.

Also a musician, dancer and synchronized swimmer, Schactler wanted to major in physical education at Washington State University. After a prim adviser dismissed that with a curt, “Young ladies don’t do those things at this university,” Schactler pursued a teaching degree in music.

While there, she met fellow WSU student and musician John R. “Dick” Schactler, a Yakima native and trumpet virtuoso. They married in 1948 and graduated with music degrees in 1949. He was a music teacher in the Selah School District for two years before earning a master’s degree from the famous Eastman School of Music in Rochester, N.Y., and returning to Washington.

Dick led award-winning bands at Grandview, Mount Tahoma and Eisenhower high schools. During his time at Grandview in the 1950s, Carolyn coached the school’s synchronized swimming team, known then as water ballet. She had competed in the sport at WSU.

“That was really fun,” said Schactler, a petite woman who wore a jacket of her own design and a sewing machine pendant on a long silver chain. Another day, it was a scissors charm.

Carolyn directed the Yakima Youth Orchestra for two years and taught private lessons and summer school, along with a lot of substitute teaching. As the couple’s six children graduated from high school, she started thinking more about her own future. She didn’t want to teach music and had filled in for an apparel design professor at what was then Yakima Valley Community College.

“I made everything (her children) wore, everything Dick wore,” Schactler said. “They wouldn’t hire me because I didn’t have a master’s degree.”

In 1976, after earning bachelor’s degrees in home economics and home economics education at Central, Schactler received a master’s degree in apparel design there. She had found what — and where — she wanted to teach. The university hired her as a professor in the Department of Family and Consumer Sciences after a national search, and “I never looked back,” she said.

Along with her love of making her own designs, Schactler collected vintage clothing. She donated her personal collection of more than 300 pieces of clothing and accessories to the WSU Department of Apparel, Merchandising, Design and Textiles. The items date from about 1840 to 1970, notes a 2005 university magazine article.

“I miss it,” said Schactler, a self-described fashion history buff.

A couple dozen of those items are replicas Schactler designed and made for teaching purposes.

“I didn’t use slides. I used garments. They loved it,” she said of her students. “If they were small enough, I’d let them wear it.”

In her time as a professor in Central’s Apparel Design Program, Schactler taught clothing construction, couture design, tailoring and pattern drafting, draping and fitting, principles of design, costume and fashion history. She retired at age 77 in 2004.

For much of known human existence, men dressed as elaborately as women, Schactler said.

“Men were the peacocks of the species,” she said.

That began to change in the mid-19th century, about the same time a few bold women began testing out the predecessor of pants — bifurcated skirts, also known as bloomers.

Men’s clothing changed to the point it’s “boring” today, she said. At the same time, women gradually gained freedom from the clothing and underpinnings that constrained them, such as corsets, and the designs that required someone to help them dress.

“It was a very slow process,” Schactler said. “Women just sort of perked up in the middle 1800s.”

Her designs are inspired by ancient Egyptians and Macedonians, Middle Ages royalty, the Edwardian period, modish silhouettes of the 1960s and more.

For example, a multicolored coat with detachable sleeves was inspired by the Renaissance period when sleeves were buttoned or attached with laces.

Though pieces in the Yakima Valley Museum’s extensive textile collection aren’t nearly as historic as some of her inspirations, it includes dresses that date back to around 1810, noted Mike Siebol, curator of collections. The oldest commissioned couture piece is a circa 1890 coat by Frederick Worth of London.

Along with history, Schactler appreciates the designs of indigenous cultures around the world, such as the native dress of Tsonga women of South Africa, where she taught and studied on sabbatical.

Several of Schactler’s pieces were inspired by her time as an exchange professor at Matsue College and Matsue University, Japan, including a kimono with a highly detailed scene of a building, garden and cherry blossoms.

Fashion should be fun, too. Schactler designed a short dress made completely of men’s neckties. A cream-colored wedding suit appropriate for a second marriage has a short skirt with detachable train and a modern kind of top hat.

Still mulling what she will wear to the opening reception for her exhibit, Schactler has plenty of possibilities and ample time to choose something — hopefully her own design — that reflects what she loves about fashion.

“I like things that are very beautiful, have good flow and the colors are nice,” she said.