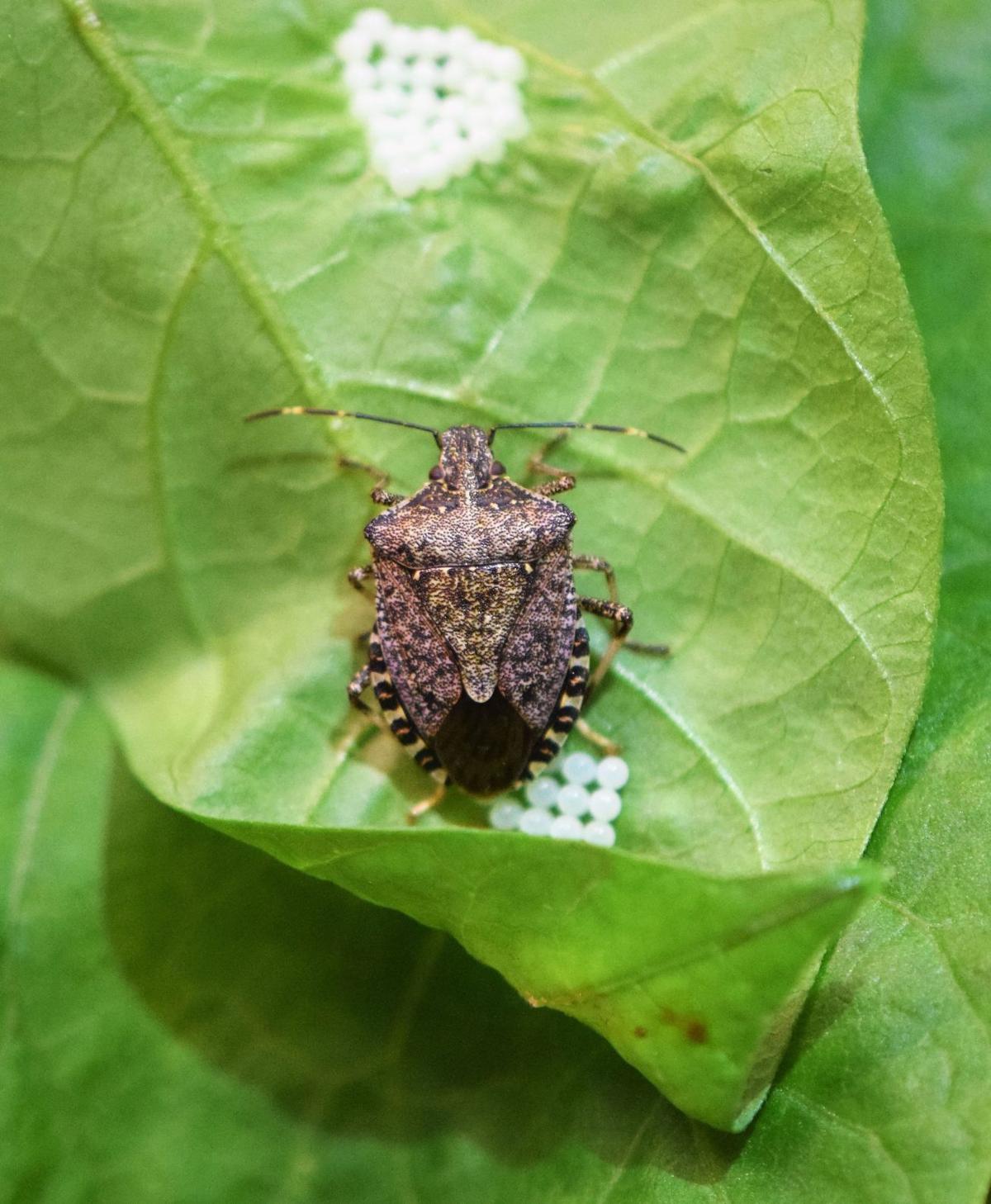 A female brown marmorated stink bug lays her eggs on the underside of a French bean plant. 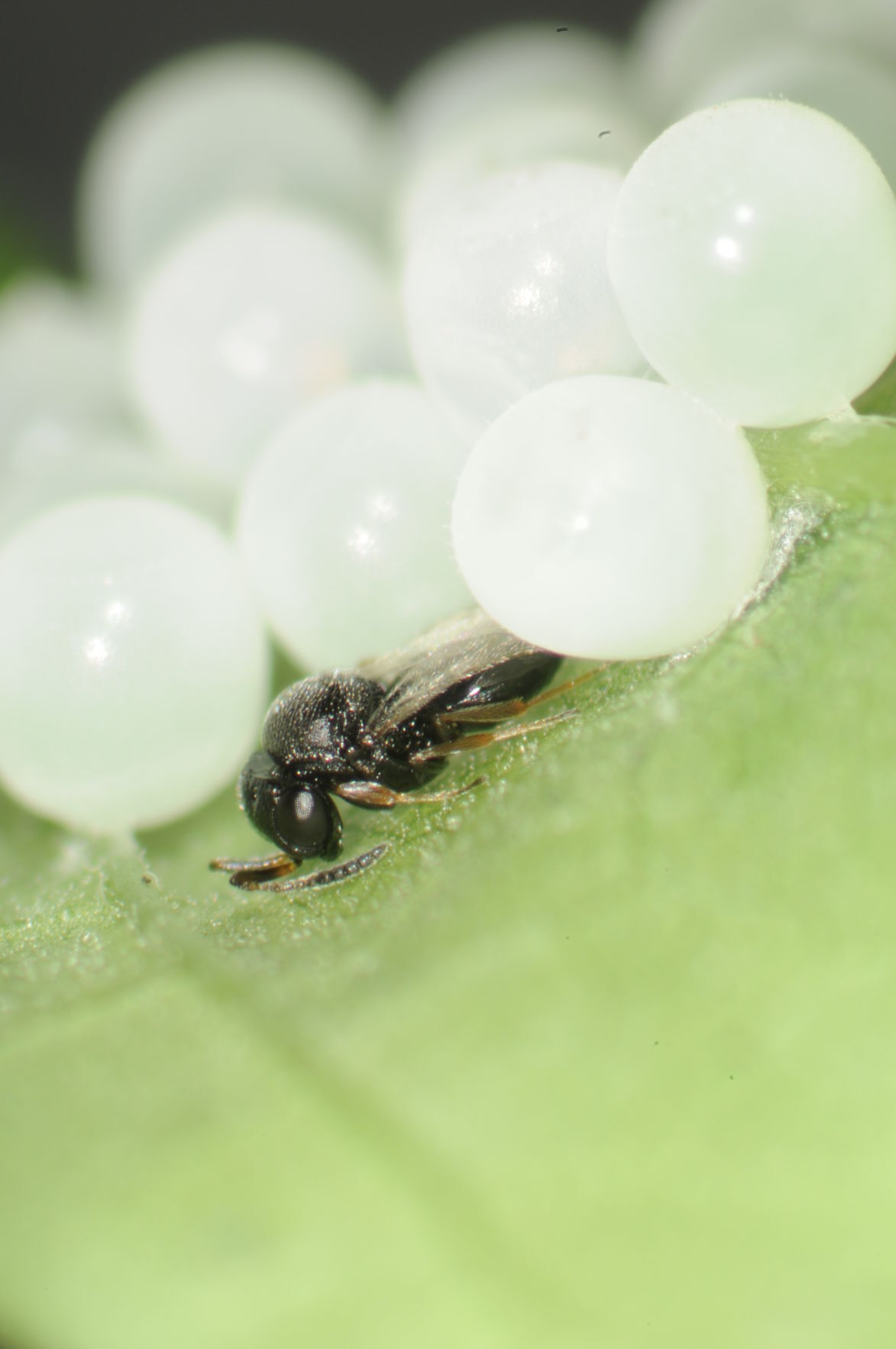 Researcher Joshua Milnes has been raising an army of small samurai wasps that attack brown marmorated stink bug eggs. The wasp lays its eggs inside the host eggs; the wasp larvae develop inside the stink bug egg, and when it matures to adulthood it eats its way out of the egg, killing the developing stink bug in the process. The wasp is about the size of a sesame seed.

A female brown marmorated stink bug lays her eggs on the underside of a French bean plant.

Researcher Joshua Milnes has been raising an army of small samurai wasps that attack brown marmorated stink bug eggs. The wasp lays its eggs inside the host eggs; the wasp larvae develop inside the stink bug egg, and when it matures to adulthood it eats its way out of the egg, killing the developing stink bug in the process. The wasp is about the size of a sesame seed.

The invasive brown marmorated stink bug first came to this writer’s attention during a Yakima Master Gardener lunch-and-learn session in spring 2019. Some months later, the creature was observed and captured on my property, 5 acres bordered by two creeks that once was horse and cattle pasture and that produced hay for those animals. Now the acreage supports flower beds, a small vegetable garden, and ornamental trees and shrubs.

The stink bug is an invasive pest known as the BMSB (scientific name Halyomorpha halys). There were three sightings and collections of the BMSB, all to my dismay, inside my residence, one in the early spring of the year, then in the early fall, and again in January. BMSB adults look for a sheltered place to overwinter in homes, barns and sheds. They are likely to come into a sheltered area in late fall. Clearly, given the times of the year, these were the comings and goings of the BMSB. All three individuals were unwelcome and a little surprising, since I had thought they might be more evident in our county, if at all, in productive agricultural acreage and not in my corner of the world.

The brown marmorated stink bug is not simply an annoyance; it seriously threatens our agricultural growing area, and has already devastated agricultural crops in eastern states where the insect has gained a foothold. As an example, the stink bug caused $37 million in damage in 2010-11 on the East Coast in the apple industry alone, according to Joshua Milnes, a local entomologist with the Washington State Department of Agriculture’s Plant Protection Division. Neither will the bug be kind to your garden, as it feeds on and damages vegetables and fruit, with a preferred taste for red peppers, apples and pears.

And it won’t stop there, with ornamentals also falling prey.

The adults that I found and collected had a fortunate end to their residency with me, at least fortunate for me. They were provided to Milnes, who identified them and added them to his BMSM biological control project.

The first one collected, a male, was added to the project for breeding purposes. The second, a female, was even more welcomed by Milnes, since she would lay the eggs that his samurai wasps (Trissolcus japonicus) would deposit their own eggs into. The developing wasp larvae will kill the stink bug eggs, and a single adult wasp will emerge from each egg. As the result of this biological control program, wasps have been released throughout the Yakima Valley to act against the BMSB population by parasitizing them and eliminating them as a threat.

Additionally, Milnes has released the samurai wasps in Prosser and Walla Walla, and on the west side in Mount Vernon in Skagit County. In 2016, a native population of samurai wasps was found by Milnes in southwest Washington; he believes the stink bugs were likely introduced into the Vancouver area with imported goods. Prior to recent samurai wasp releases in Walla Walla, a wasp population already existed there, proving that the wasps can survive Eastern Washington winters.

As homeowners, what responsible actions can we take to help control the stink bug? Be observant; use traps that can be effective as recommended by Washington State University; avoid pesticides, as they can disrupt Integrated Pest Management programs by killing off beneficial insects; and know that scientists like Joshua Milnes are implementing biological control methods to keep BMSBs from taking hold in our area and state.

Think of the tiny samurai wasps, which are the size of a sesame seed, as a mighty and powerful deterrent to the brown marmorated stink bug. Samurai wasps are wonderful warriors working for us. Using them as a long-term strategy against the BMSB reduces the use of costly pesticides to homeowners and has a beneficial impact on the environment.

For information on other new pest threats, click on the following links:

The WSU Extension office that houses the Master Gardener clinic is closed because of the coronavirus pandemic. However, we will continue to answer your gardening questions; call 509-574-1604 and leave a detailed message. We also will respond to emails at www.gardener@co.yakima,wa.us. Again, leave a detailed message and include your contact information so we can call if we have questions. If you have photos as evidence of a problem, attach them as well; we are not accepting any physical samples at this time.